A wristwatch with thousands of sails
Tomas Rosputinsky
comments 1
Share

To wear a special yachting chronograph wristwatch in the ’60s was like driving a Porsche 911. We take a wristwatch for granted today, but back then, racers used mostly stopwatches hanging on a cord around their necks. “Other people often wanted to see my Gallet MultiChron Yachting working and try it. They could not believe it was waterproof,” says Roger Witts, an original owner, who sailed thousands of times with Gallet on his wrist. It never failed him.

Finding a black-dialed Gallet MutiChron Yachting is not easy. It’s a collector’s dream to get it directly from the hands of an original owner, for whom it was a priceless tool during dinghy races and practices in the ’60s and ’70s. Recently, I had a great opportunity to speak to this watch’s original owner, Roger, and understand how he used it, which was very enriching. I hope the design and story of Roger’s Gallet MutiChron Yachting will resonate not only because of its vivid dial but also because of its importance to sailing racers. 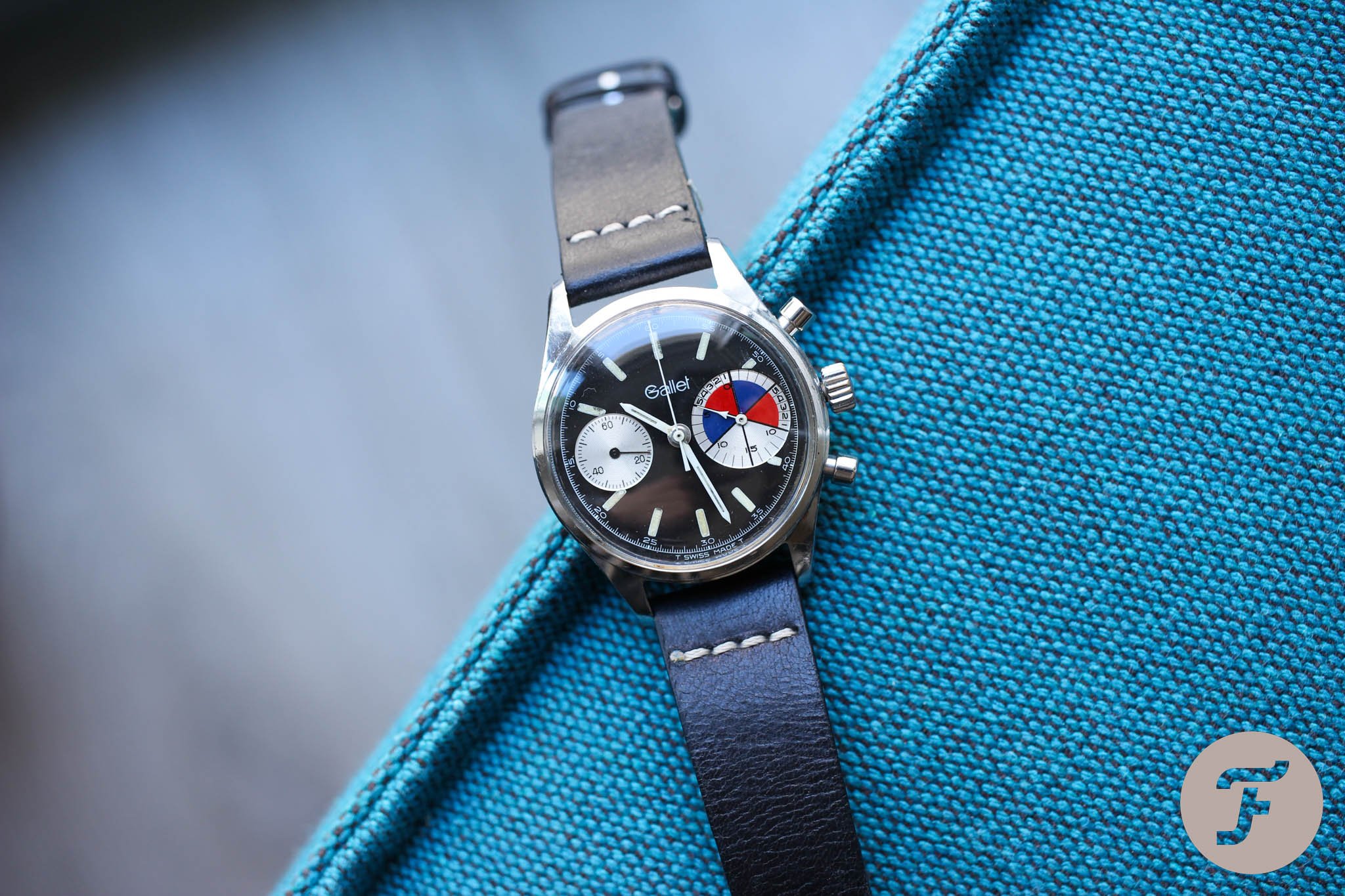 “Starting in sailboat races is critical. A good start is essential. The start entails a 10-minute warning, then a five-minute signal, and then, after another five minutes, the start itself,” Roger explained. Racers need to know if they are doing well against other competitors. A stopwatch on a cord around a racer’s neck was the usual method of timing the start and race details. Roger recollects his early days without a special yachting chronograph wristwatch, “[The stopwatch] hung down and got in the way. You had to feel around for it, taking a hand off what you were doing to check how long to go before the start.”

A wrist-worn timepiece with a yachting stopwatch changed all that. “You could see at a glance what you needed to know and continue with making a good start and making the boat go fast.” Roger sailed mostly in Chippenham, Wiltshire, at a small river club then on lakes in Gloucestershire, UK. He highlights that, for quite some time, he was the only one using a special wristwatch. Sailing wristwatches were extremely rare back then. Roger admits that the dial was at times hard to read, especially when there was spray around, but it was so, so much better than a stopwatch. “Other racers often wanted to see it working and try it. They could not believe it was waterproof.” They also often asked Roger how much it cost and where it came from. 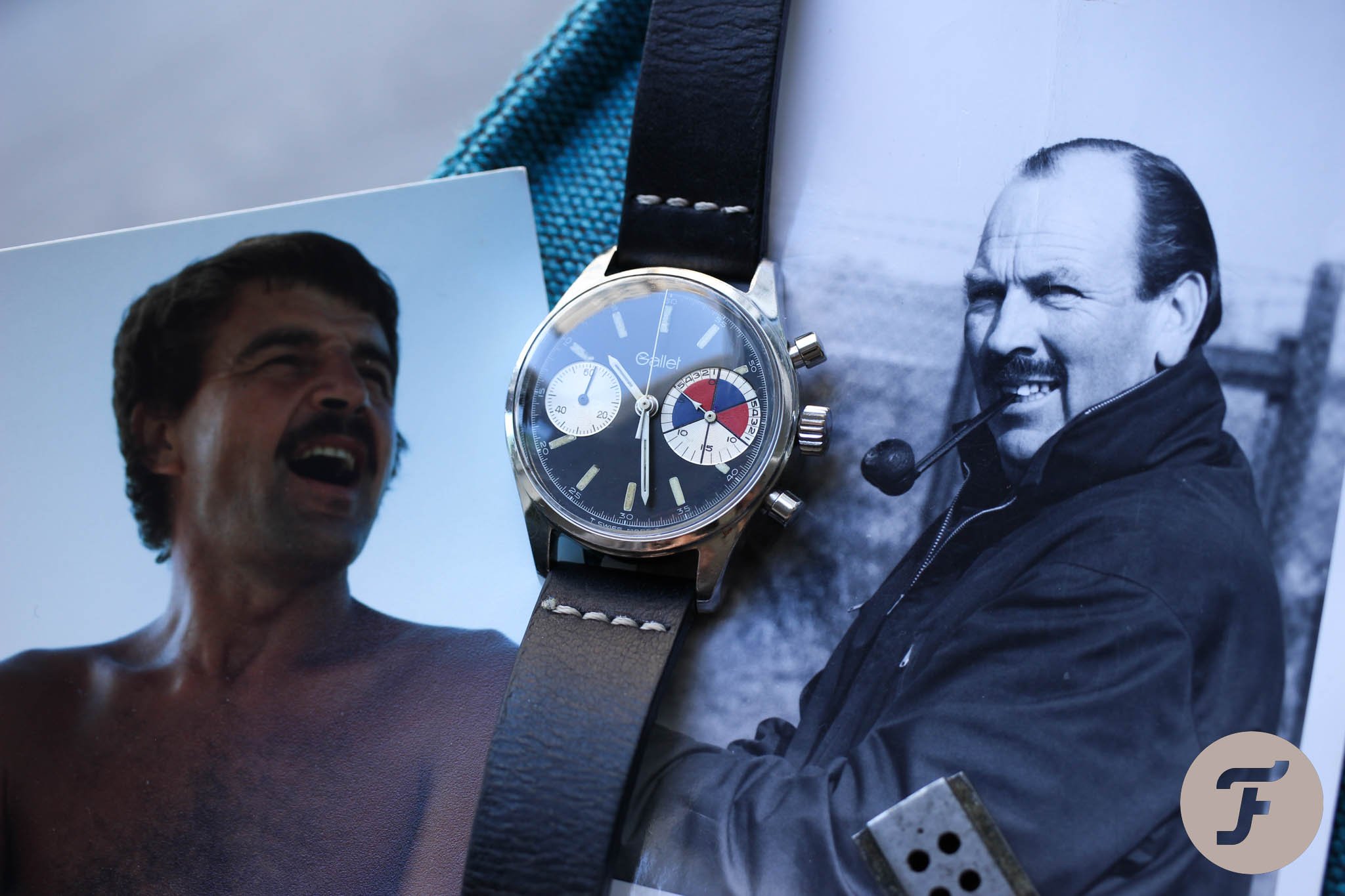 Roger actually got the Gallet MultiChron Yachting as a gift from his dinghy-racing sponsor, Stan Cheshire. As I look at the old photo of an older, perfectly combed gentleman with a pipe between his teeth, Roger continues, “Stan owned a garage selling used cars. I met him in Chippenham, Wiltshire at a river sailing club. He used to race speedboats and wanted to learn to sail and race dinghies. He was hopeless at first… bless him.”

Although Roger was much younger, he taught Stan some techniques to go faster and helped him regularly. Roger eventually got to know Stan’s family, Stan got to know Roger’s family, and they became friends. A special sailing watch was Stan’s idea of how to thank Roger. And he did it in a very classy way. “My starting was always hopeless! Stan realized this, as I was always having to race harder and pass people who had started better than me. Stan asked my father’s permission to buy me the watch,” says Roger nostalgically. He bought the watch from a jeweler in Chippenham called Sydney Loveridge. Sadly, the shop, which opened sometime in the 1960s, isn’t there anymore.

Roger sailing in the Championship in the 1970s. He says that, though not visible, the Gallet MultiChron Yachting was on his wrist.

Roger never stopped sailing, even when the Gallet was already in a drawer.

Roger was born in 1949, the same year my father was born. He received his Gallet Yachting from Stan in the late ’60s and raced in small, lightweight sailboats. Apart from racing at the local club level, Roger also raced in National Open Meetings and Championships. “I was considered to be gifted and fast in a sailboat. In fact, this was probably due to the many hours — almost every day — spent practicing,” he tells me.

During his career, Roger was Club Champion at four sailing clubs. Nationally, he won several Open meets and went on to have several good placings in the National Solo Championships, British Moth Championships, and European International Fireball Championships. In the early 1970s, he competed in the Dunhill Finnfinder Competition to find a UK representative for the 1976 Montreal Olympics. “I did not succeed, but I had fun.” 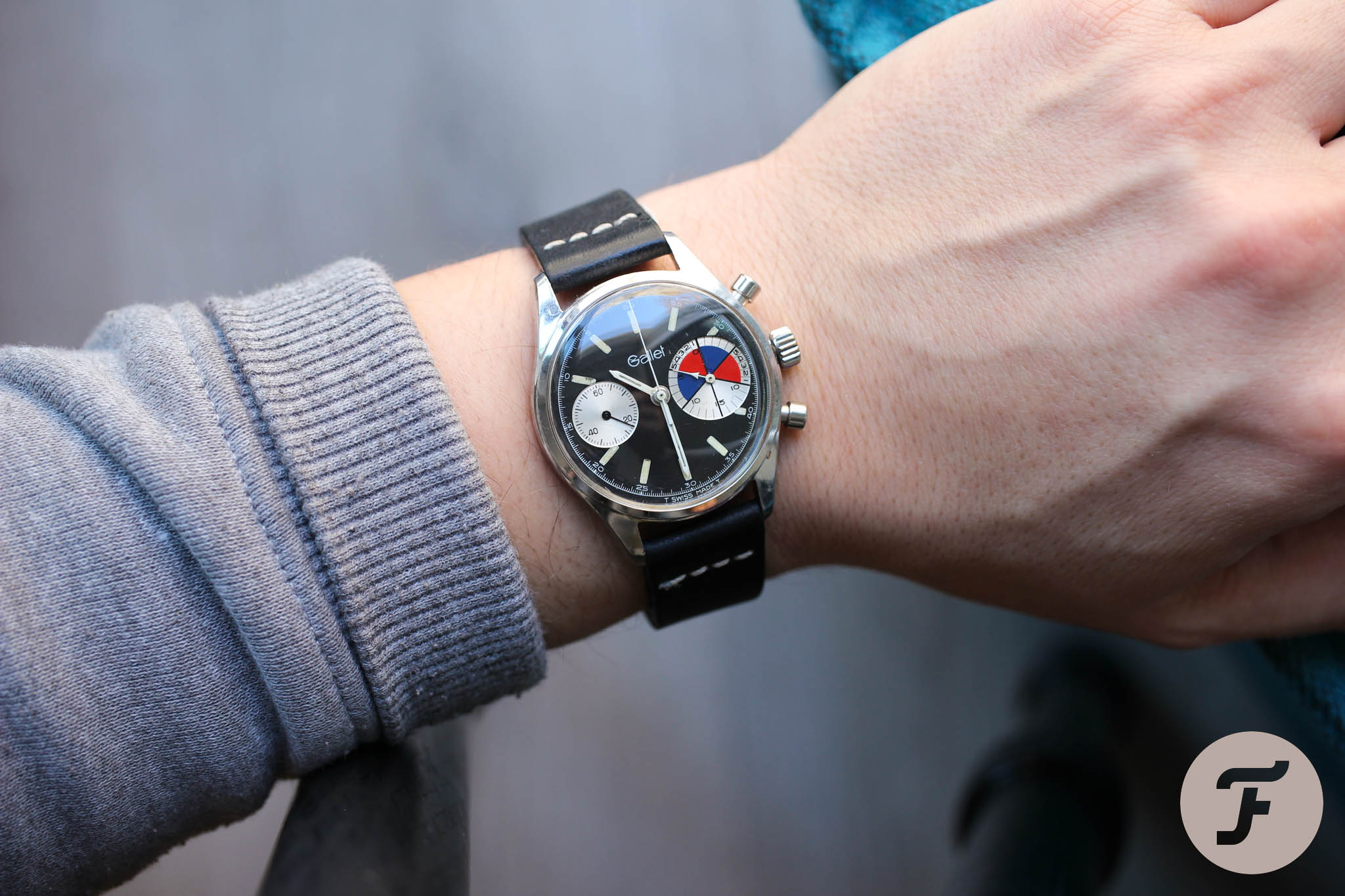 “I used the watch for sail races for about 10 or 12 years, I think,” Roger recounts. When I asked about the service history and reliability of his Gallet MultiChron Yachting, Roger recalled, “The seal may have been serviced once, as it liked to fog up. My solution prior to getting the seals renewed was to leave it in a warm place or in the sunshine and after a few days, it would be OK. I can’t remember who serviced it; Stan arranged it for me. Besides that, it never failed. It has never stopped during use after being wound,” says the original owner proudly. 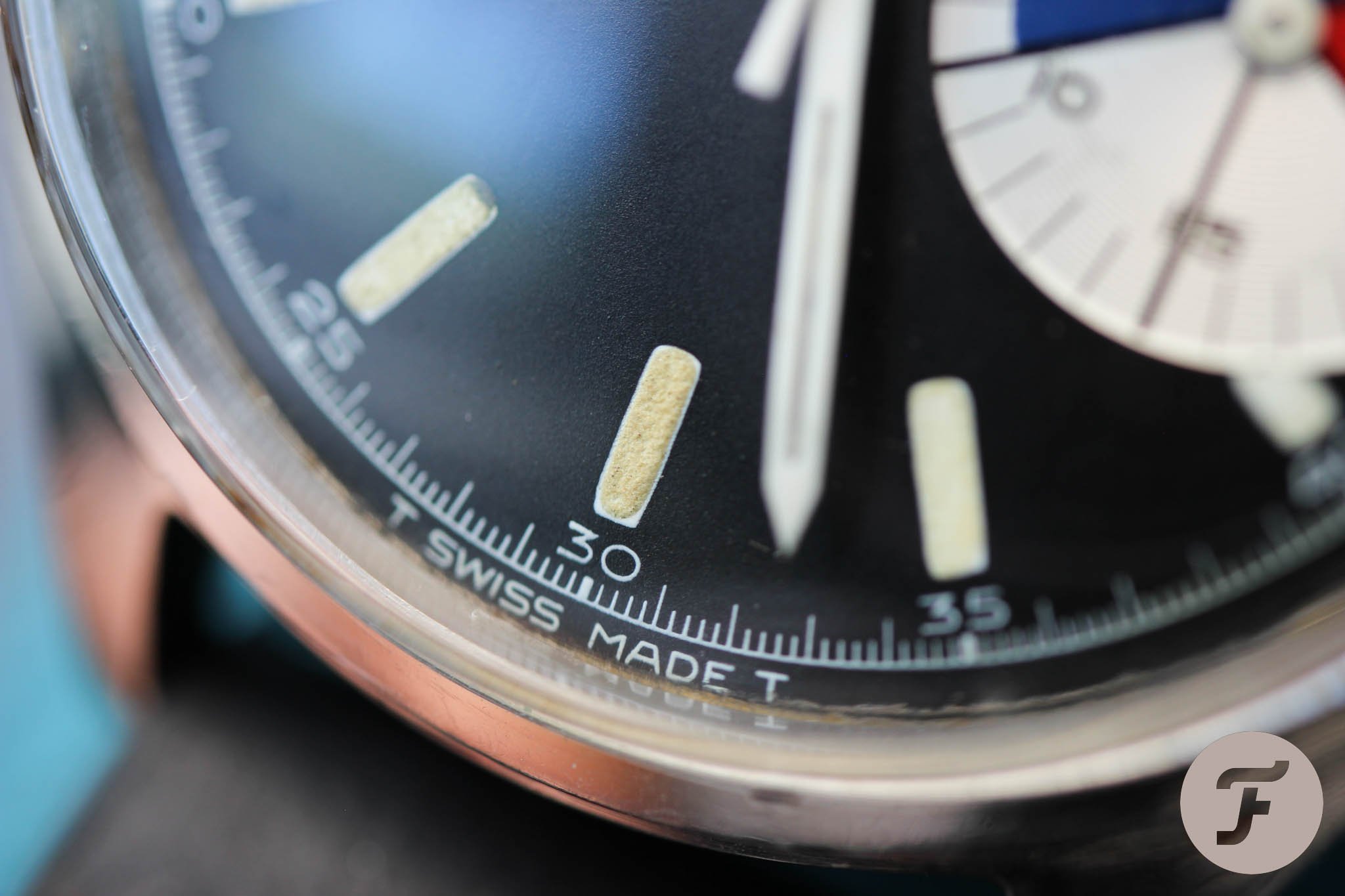 Drawer time after the end of the career

After a bad car accident in 1978, Roger retired from sailing for a while. Although he resumed sailing early in the 1980s, after about 1975/76, the watch was never used again. Decades in a drawer helped to preserve it in such great shape. I am holding it in my hands now. I am stunned by the almost perfect dial with just a few tiny stains on the lume indexes left as a memento of the previously mentioned foggy experience. Honestly, I am stunned by how perfectly the Gallet MultiChron Yachting must have been built to keep its shape despite the thousands of days of active sailing duty.

How it became mine

A year ago, Roger decided to move with his wife and young son from the UK to Bali. When he was going through his old stuff, he found his old Gallet watch. I asked Roger a few times whether he is really sure he wanted to part with it. I found it a great heirloom for his son, but Roger had already decided to sell it. “It has great memories for me, but I would like someone else to enjoy it now. I plan to use the money to help with my son’s education.” Well, maybe in twenty years, now-four-year-old Bosco will find this article and give me a call. Hopefully, his father’s watch will still be safe under my protection.

Well, I am pretty sure that in ten years, Roger’s Gallet MultiChron Yachting will be in better shape than it was when it reached me. If you check the pictures above, you can have a brief idea of what condition it came in. Locating the missing pusher cap was an especially big challenge. I would rather swim across the Atlantic than face the task of sourcing Gallet pushers again. And, I would like to mention, that I can’t swim. It took me almost a year to get a replacement pusher. I wouldn’t do things like this time and time again if it weren’t for helpful watch friends with their eyes and hearts open. Thank you, Paul.

Besides the pusher cap and some polishing of the crystal, there was not much to do. According to my watchmaker, the Landeron 149 movement was in perfect shape, but we gave it full spa treatment anyway. There is also a white-dialed version, and it is usually powered by a Valjoux movement. If you find a black-dialed version like mine, you can be pretty sure there is a Landeron caliber inside. The Landeron is not as fine and smooth as the mighty Excelsior Park found in this watch’s slightly more dressy predecessor, but it will do the job. 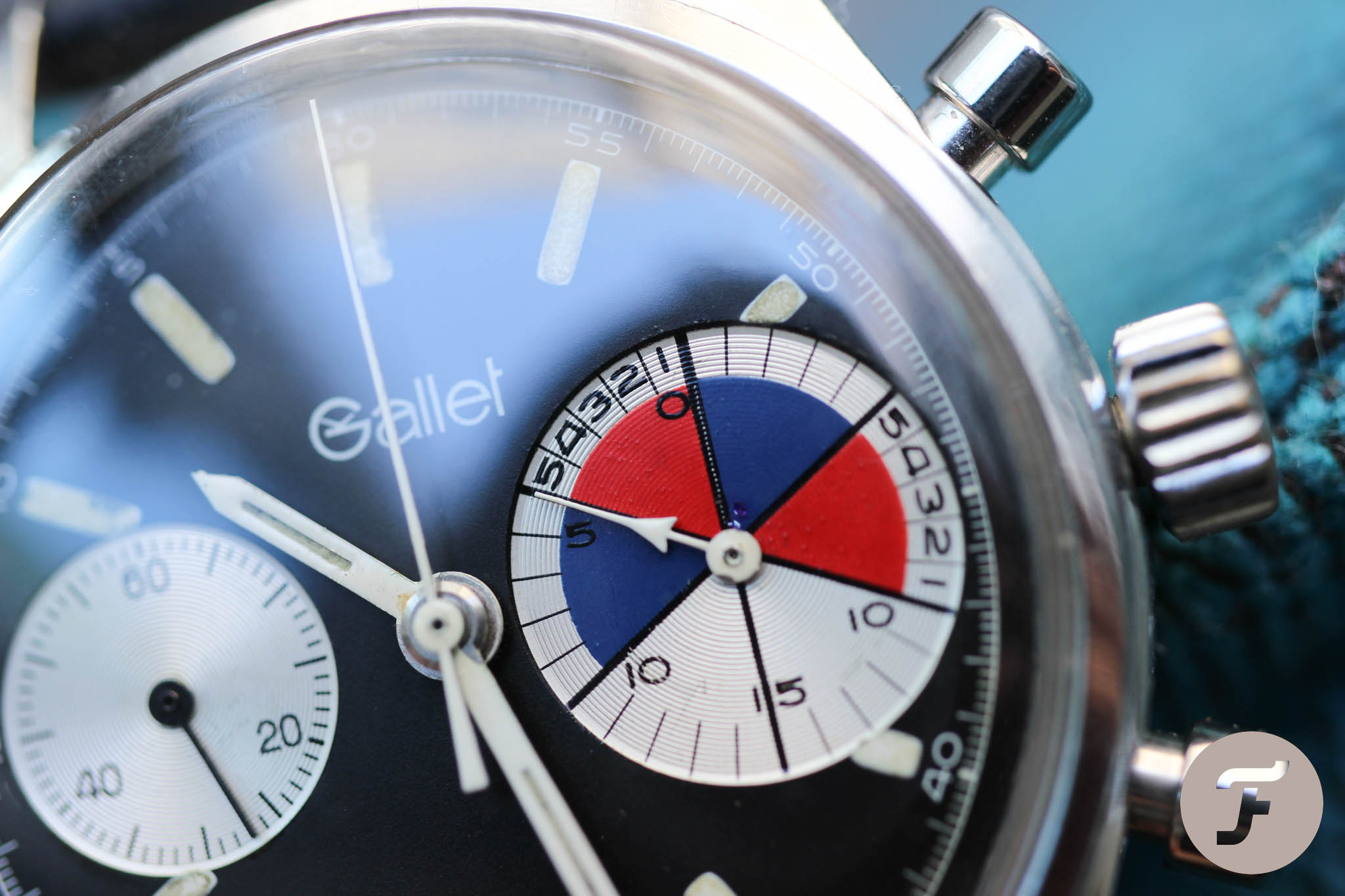 Only after my Gallet MultiChron Yachting came back from service could I fully enjoy its big-eye beauty. The silver sub-dials perfectly contrast with the black dial. My beloved predecessor also has some color detailing, but on this model, it’s more “premium”. Notice the off-center default position of the hand on the minute counter. That’s the correct position you will find in old catalogs, and it’s in line with the previous model. If you find a Gallet MultiChron Yachting resetting to zero, not five, it might be a signal that you are not buying a perfectly tuned example, no matter what the listing may claim. 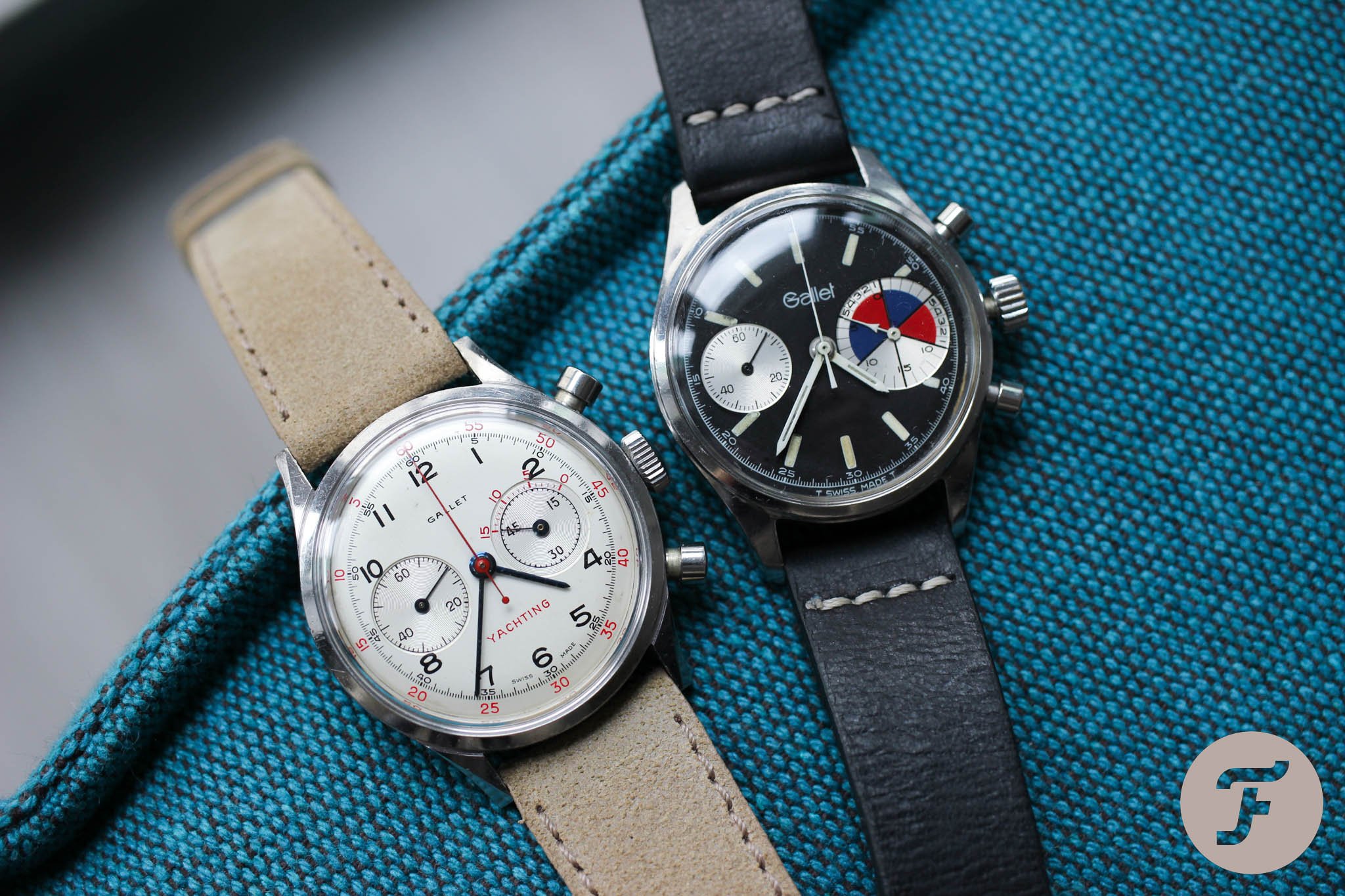 A few months ago, I wrote a review on the previous-generation Gallet Yachting, which represents one of my all-time favorite chronographs. It’s interesting how different the later model is. It keeps the vivid visual originality but has lost a bit of grace. The predecessor is more classy and dressy, while the successor is younger and a bit more sporty. They are so individualistic that they both have managed to create their own little sweet spots in my heart. When I choose one of them, I already know what watch I will wear the next day.

When it comes to size, a Gallet MultiChron Yachting is a bit smaller. It wears differently than its predecessor, but it’s also perfectly comfortable. To use Roger’s words for one last time today, the later Gallet MultiChron Yachting watch “was a true waterproof sports tool that could be easily worn on and off the water. Maybe a quick rinse-off, dried, and reworn.” Happy hunting.

Roger never stopped sailing, even when the Gallet was already in a drawer.

Roger sailing in the Championship in the 1970s. He says that, though not visible, the Gallet MultiChron Yachting was on his wrist.

Hot Topics
Laventure Automobile Chronograph With A Proprietary Movement — Marking A Huge Leap Forward For One Of The Industry’s Most Promising Brands
155 comments
Fratello Exclusive: An Inside Look At The MoonSwatch Production Facilities
75 comments
We Talk To Swatch Group CEO Nick Hayek About The MoonSwatch
52 comments
Selling Your Watch To A Dealer Or Trading It In — Tips From A Former Watch Dealer
49 comments
Summer Splash — Round 2 : Jorg’s Tudor Pelagos FXD Vs. Lex’s Hublot Big Bang Integral Ceramic Sky Blue
47 comments
Popular
Rolex Submariner – Historical Overview Of A Diving Legend
Robert-Jan Broer
22
Hands-On With The Seiko Prospex Dawn Grey Series
Robert-Jan Broer
9
Grand Seiko SBGA211 ‘Snowflake’ And Why I Didn’t Buy It
Robert-Jan Broer
22