When I started to explore vintage Omega watches I was instantly hooked by their chronographs. To me, a chronograph is one of the coolest and most usable features a watch could have. This was the reason – or perhaps the fact that my first Omega with a complication was a caliber 1040 chronograph. Still to this day I hold those watches near and dear to my heart. So, as I dwelled into the wonderful world of vintage Omegas I came across a model line that, to me, was the epitome of vintage Omega dress watches, and there were many. It was the Omega Cosmic line. Now, I’m not talking about the late 60’s early 70’s cushion-case (Seamaster) Cosmics and Cosmic 2000s. Though I had a few of those too. I’m referring to the triple calendar moonphase versions from the late 1940’s. Vintage Omega moonphase watches like the 2486-2 we’ll talk about today. 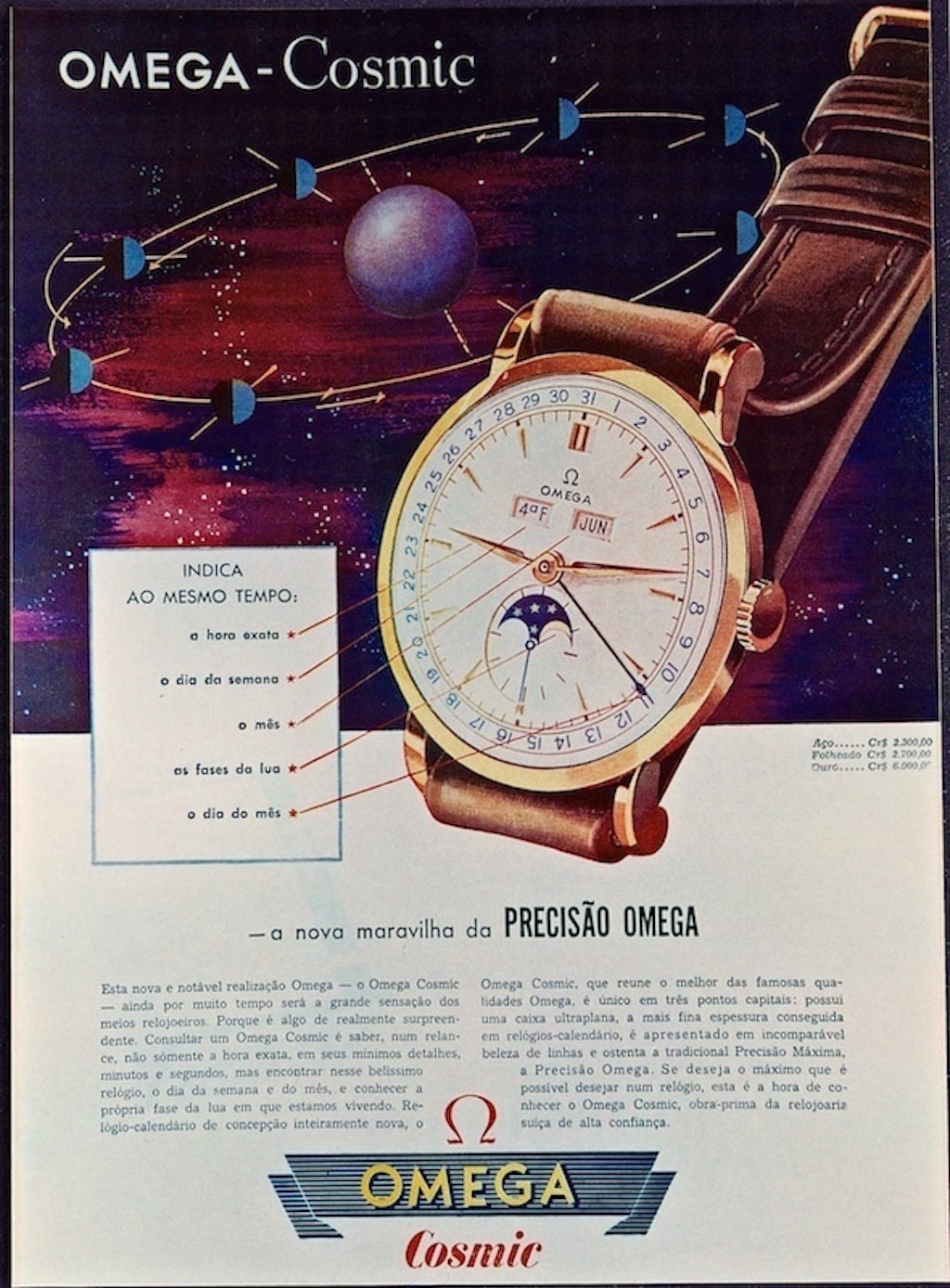 Some call it “moon phase”, others write “moonphase”. Since Omega uses the latter term, I’ll go with that too. Moonphase is a complication that is fairly useless nowadays. However, it connects us to the very beginning of time measuring. The cycle of the Moon is approximately 29.5 days. This means that from new moon (when the Moon is barely visible in the sky) to full Moon (when the whole disc is illuminated) back to the new moon again our grey astronaut landing station needs 29 days, 12 hours and 44 minutes (and 2,9 seconds) to conclude. This cycle was recognized thousands of years ago and it became a way to measure the passing of time. One could look up to the Moon and tell if it was the beginning or the end of a month (well, this +- 29.5-day period). Over time a few days were added or taken away and the (Gregorian) calendar we know today was born. 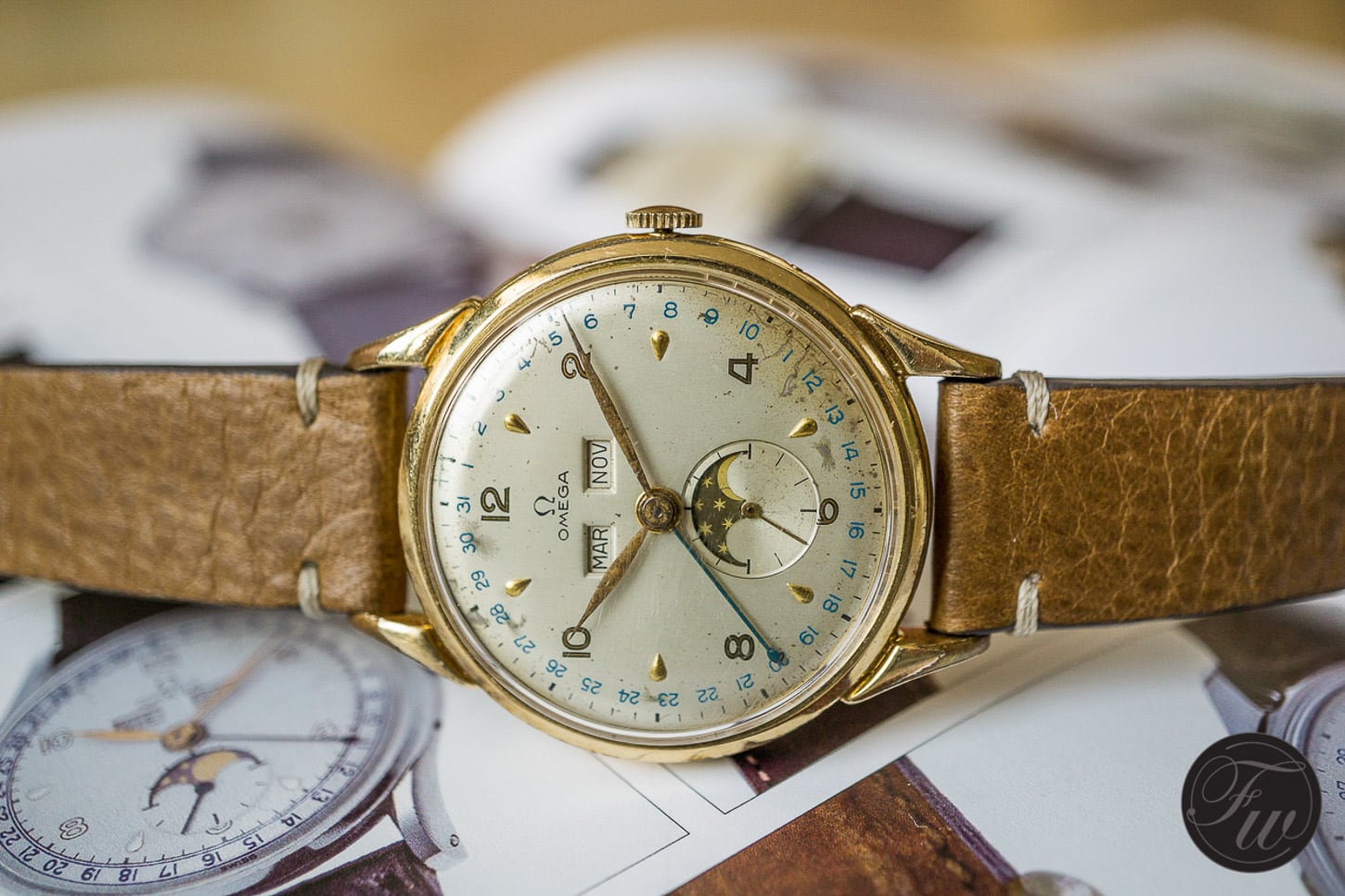 The Cosmic collection was introduced in 1947 and Omega had it in production until 1956. At the time it was one of the most exclusive watches the brand could offer. The Omega Cosmic watches came in two sizes (34-35mm and 37.5mm) in four different case materials. You had steel, gold filled, gold-capped, and solid gold variants (14K and 18K). As far as my research goes, Omega released six references: five in the late 1940’s and one in the early 1950’s. The reference 2606, 2471 and 2473 were all small (35mm) watches. The reference 2485 and 2486 were larger with 37.5mm. In 1951, the last reference of this collection came to existence as the reference 3944. It was also smaller in size but had a distinct square case, instead of round like all the others before. All of them came on a leather strap with matching buckles. 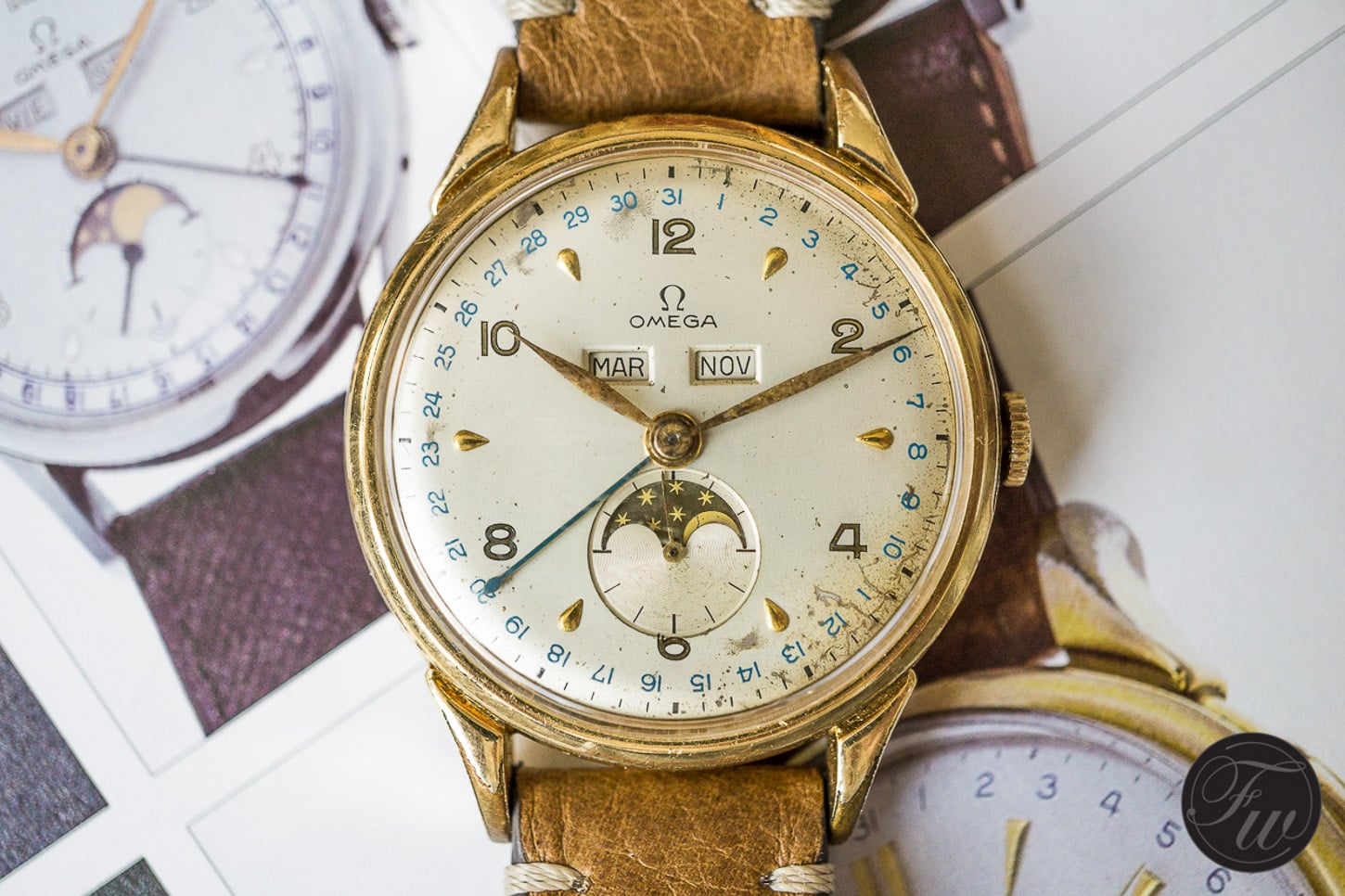 Some say that the movement inside the Omega Cosmic moonphase watches were in-house calibers. This is not true. As a matter of fact, believe it or not, that movement has a straight lineage to the Moonwatch. Let me explain; Omega only used one type of movement in their Cosmic watches. Omega calls it the caliber 381 in their database. However, that movement only got its name changed to caliber 381 around 1948 (some say 1949). Beforehand it was called the 27 DL (PC AM). Furthermore, the official name of the new caliber was 381 27 DL PC AM 17 P. DL stands for triple date and moonphase, PC refers to the shock absorber and AM is for antimagnetic. 27 marks the movement line where the number comes from the size of the movement at 27mm in diameter and 5.25mm in thickness. It has 17 jewels and 18.000 Vph. 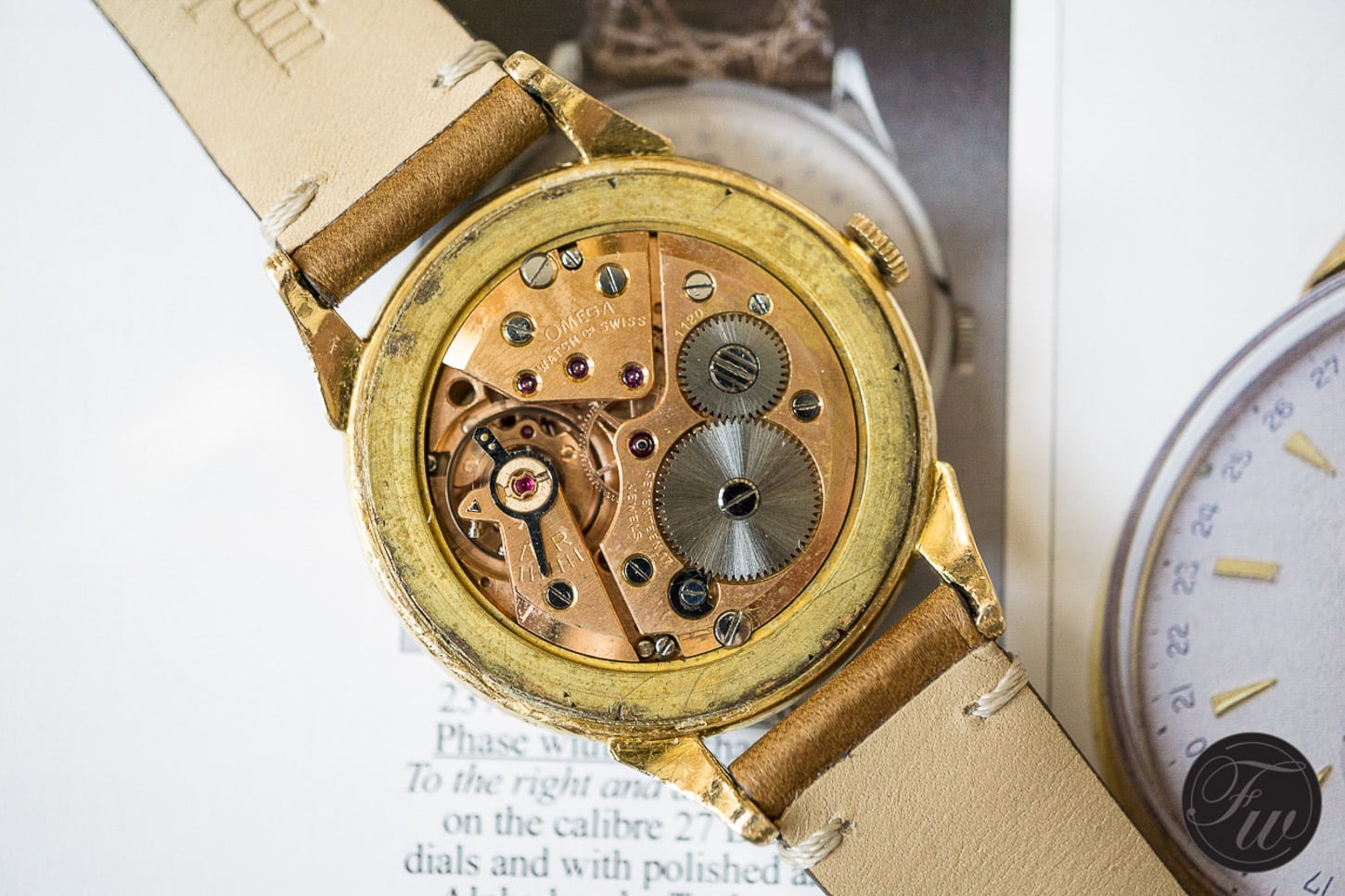 Omega used this movement, they did not develop it. Lémania did. Remember that at the time Omega, Tissot and Lémania had already formed the SSHI (Société Suisse pour l’Industrie Horlogère – Swiss Association for the Watchmaking Industry) the predecessor of the Swatch Group. Lémania delivered the movements that Omega and Tissot used in their watches. Lémania gained a market while the brands got movements by one of the greatest manufacturers of the time. It was a win-win situation for everyone. The 27 DL and the 27 CHRO (that later became the 321) did not only come from the same movement manufacturer but also shared a number of similar technical features. Moreover, at Lémania Albert Piguet was in charge for the development of both movements. Therefore the 381 is not only a unique movement in the Omega Cosmic watches but one with an awesome story to tell. 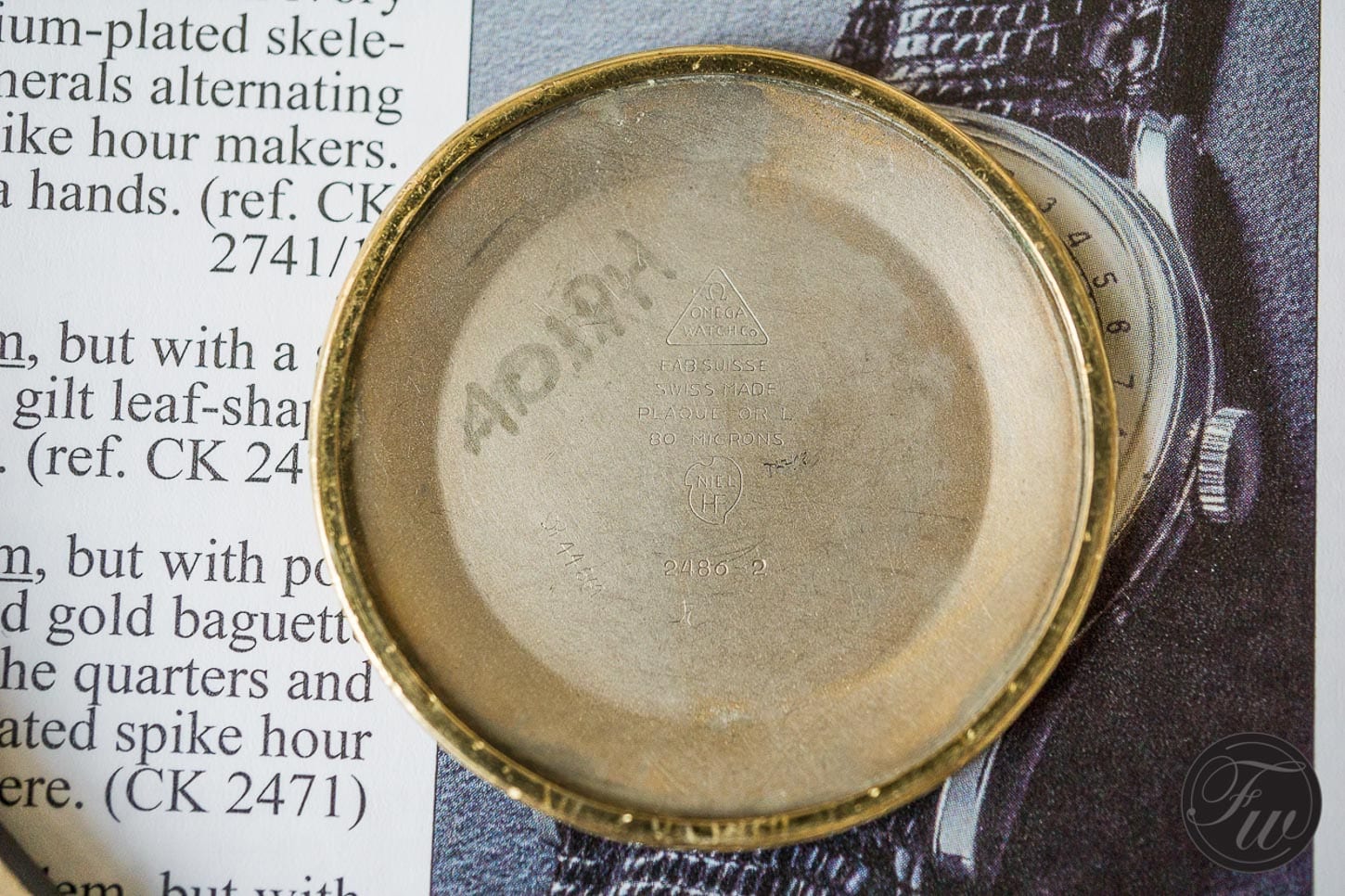 The biggest problem one might come across in connection with the Omega Cosmic moonphase is the dial condition. As you can see in the pictures mine also seen some better days but I still consider it really good for its age. Not to mention that the macro photos bring out every small blemish that might be hidden to the naked eyes. Still, we can agree on that the dials on many models, regardless of what reference we are looking at, are far from pristine these days. This could be the reason for the watch’s age or the fact that they were not water resistant, so water could make its way into the case initially destroying the movement and/or the dial. A lot of redials are on the market and one has to be well-trained to be able to spot the original ones. It’s not impossible though but takes practice. 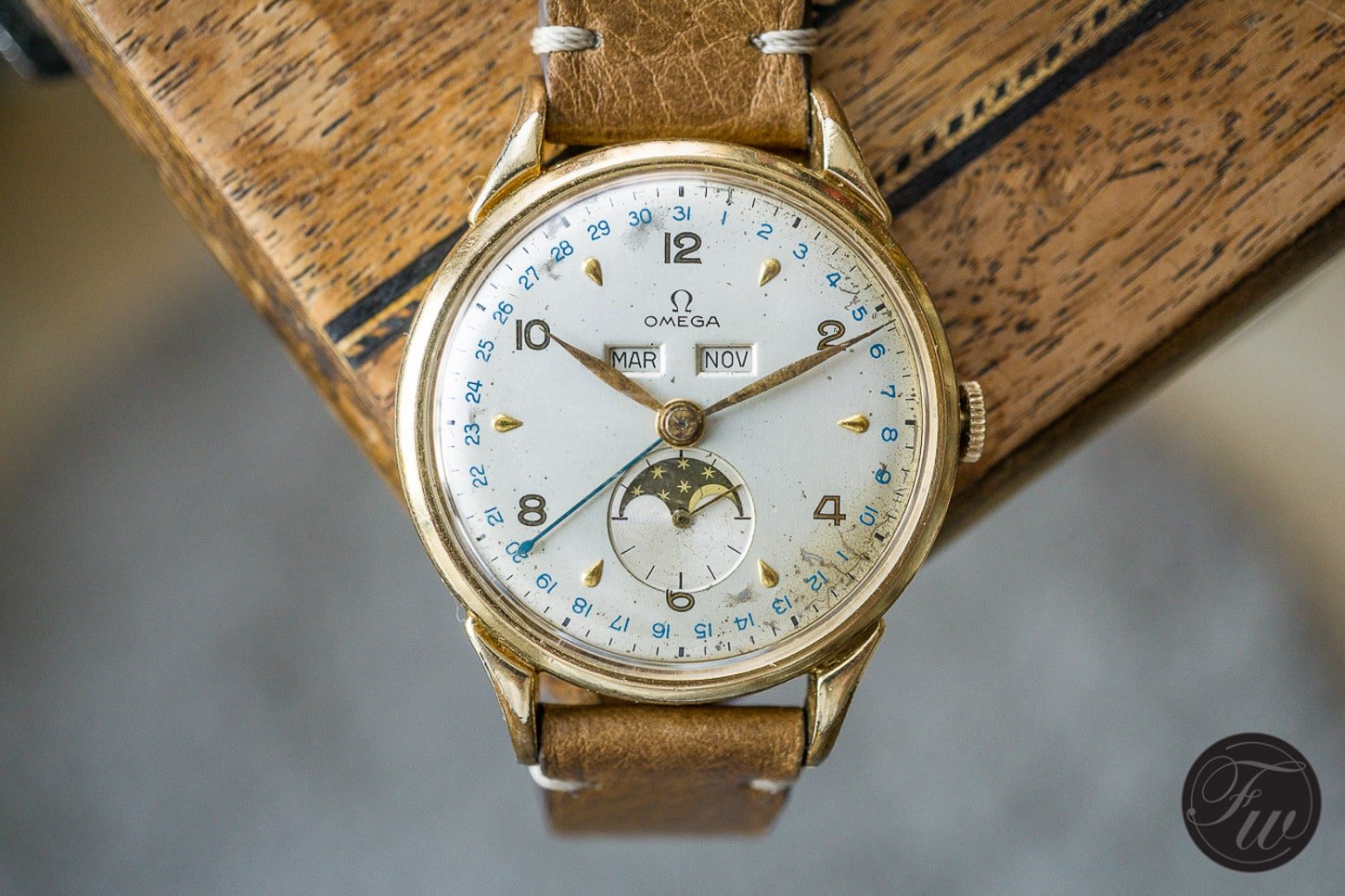 The layout is simple. You have the moonphase aperture at 6 o’clock position. That also serves as the sub second dial where the second’s hand runs over the moonphase disc. The day and month windows are under the name and logo at 12 o’clock. They are next to each other. The date is all around the rim of the dial with a pointer hand showing the correct number. Beautiful lively colors and shapes characterize the Omega Cosmic moonphase dials. The indexes are often convex and painted, the dates have different colors than the indexes and again different than the numerals. The hands could be alpha or leaf, the indexes could be baguette or spike with smooth or beveled surfaces. While the majority of the dials have no lume in some rare cases you can find one with radium-covered numerals and/or indexes. 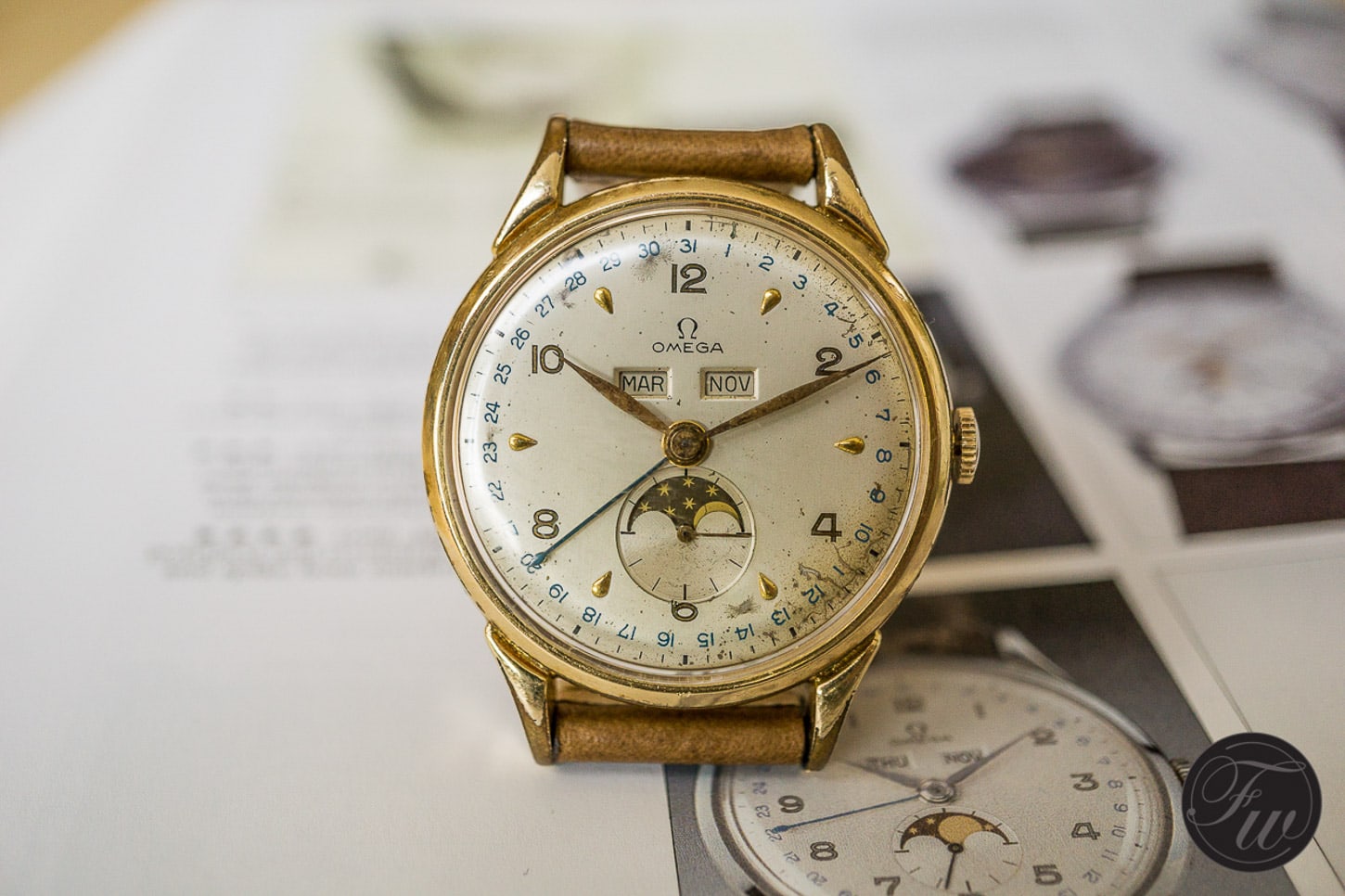 According to some sources, Omega made roughly 50.000 Cosmic moonphase watches in a course of 9 years. However due to a number of factors they are not too frequent these days in good, original condition. You can find them on the usual online watch platform often with redials. The examples that are in good original condition can fetch quite a price especially if they are solid gold or steel and from the larger 37mm reference (2485 or 2486). For some reason, many of the Omega Cosmic moonphase watches I found are coming from South America almost exclusively. Although Omega marketed the brand heavily there, especially in the 1940’s and 1950’s, their heavy presence is intriguing, to say the least. The Omega Cosmic territory is still fairly undiscovered so if you have information on these watches please send us a mail and I’ll update the article accordingly.