Writing an article on the Omega Speedmaster 145.012 isn’t overly novel for us at Fratello Watches. No, it’s been covered from a historical perspective here and several variations have been discussed as well. However, I’ve not covered it and thought I’d lend my personal story as to how I came upon this Speedy and why I decided to procure it. Perhaps I won’t add too much different than what’s been said here before, but as I looked through the annals of #TBT, I felt we were missing something. So, without further ado, it’s Speedy time on #TBT… 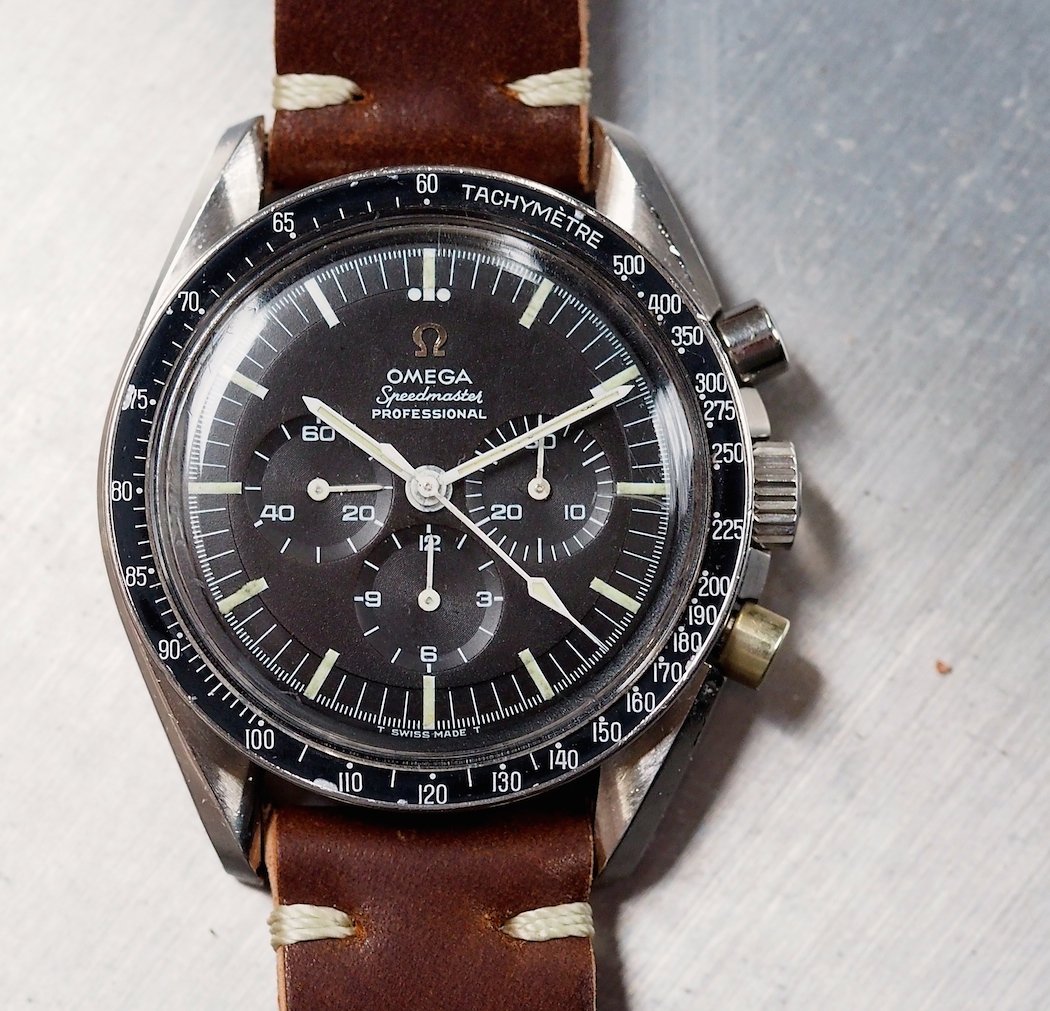 Omega Speedmaster 145.012, with its deeply dished sub registers and step dial, exhibits a lot of topography

I spoke at length (here) about my overly long courting period with the Omega Speedmaster and that it ultimately ended with the Speedmaster TinTin. Honestly, I thought I was done at that point, but as a vintage nut, I should have known better. I actually differentiated and picked up a rather worn 105.003 “Ed White” in order to sate my Pre-Moon fix. This purchase actually held me for nearly two years, but I kept a mildly watchful eye on vintage Speedmasters for sale, while picking up other chronographs mind you, and kept asking why they were so reasonable despite the iconic history. So, as one might say, the fire was lit for me to find a Pre-Moon curved lug piece such as the Omega Speedmaster 145.012. However, a couple of other things were occurring in the background as well to help expedite the search. 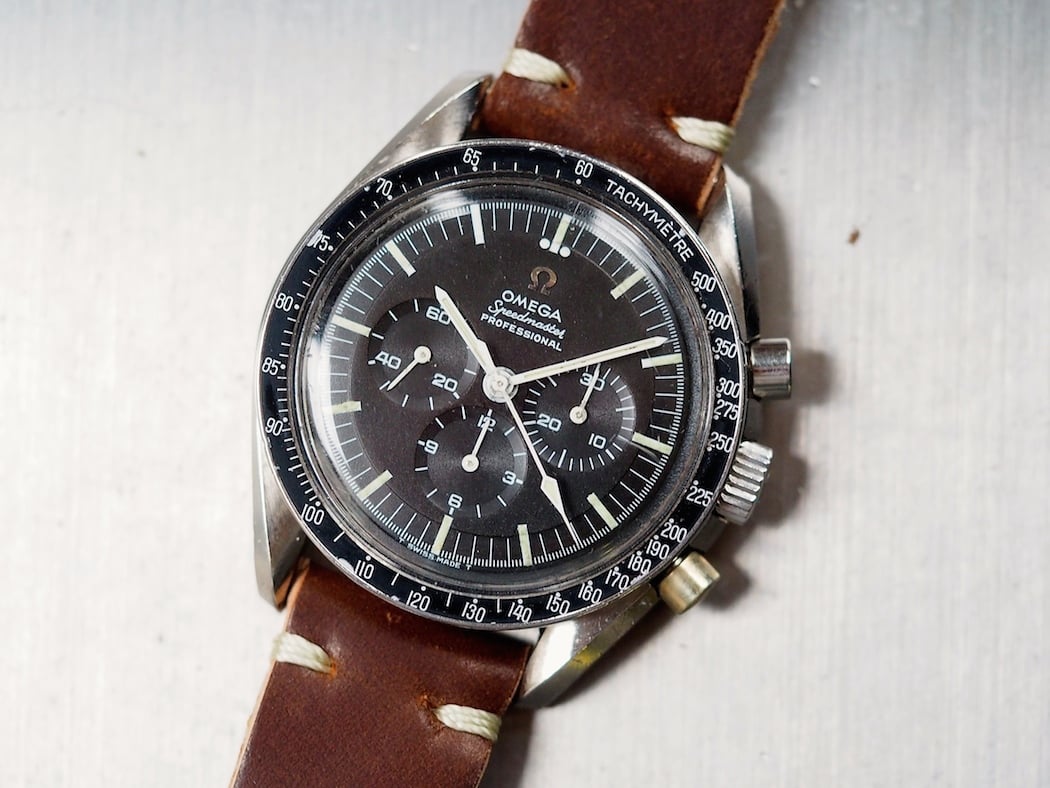 Omega Speedmaster 145.012 with its brassy lower pusher – no, I won’t change it

First off, as you’ve likely read in my Vintage Market updates, the 60’s chronograph market has gone through the roof. I’ll write on it again soon, but supplies of specimens absolutely stink. So, even though Speedmasters were still relatively inexpensive 8-12 months ago versus today, I noticed that good, relatively unmolested examples were beginning to become scarce on account of the entire market being hot. 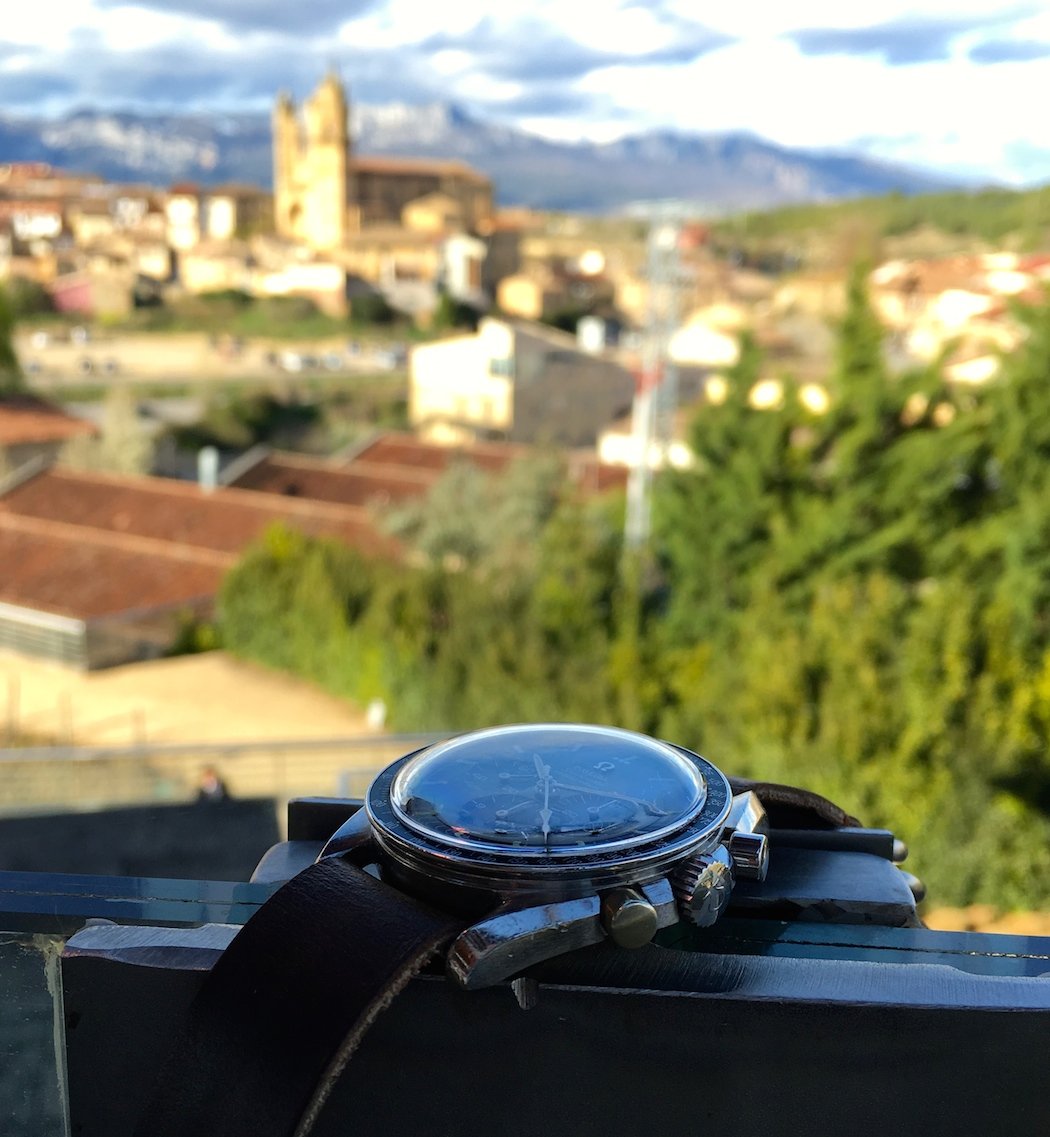 The Omega Speedmaster 145.012 against a backdrop of the town of Elciego

Also, around mid-2015, Robert-Jan informed us on the quiet that he was working with Christie’s to create some verbiage for the house’s still-to-come December 2015 “Speedmaster 50” auction. With the popularity of social media platforms, forums and eBay, I no longer feel that auctions wield the sole hammer of value estimation, but they’re still highly important, visible events. Also, when a big house such as Christie’s decides to focus an entire event around one model, it’s sure to generate attention – and it did. Needless to say, I’m glad that I bought this Omega Speedmaster 145.012 prior to the auction. 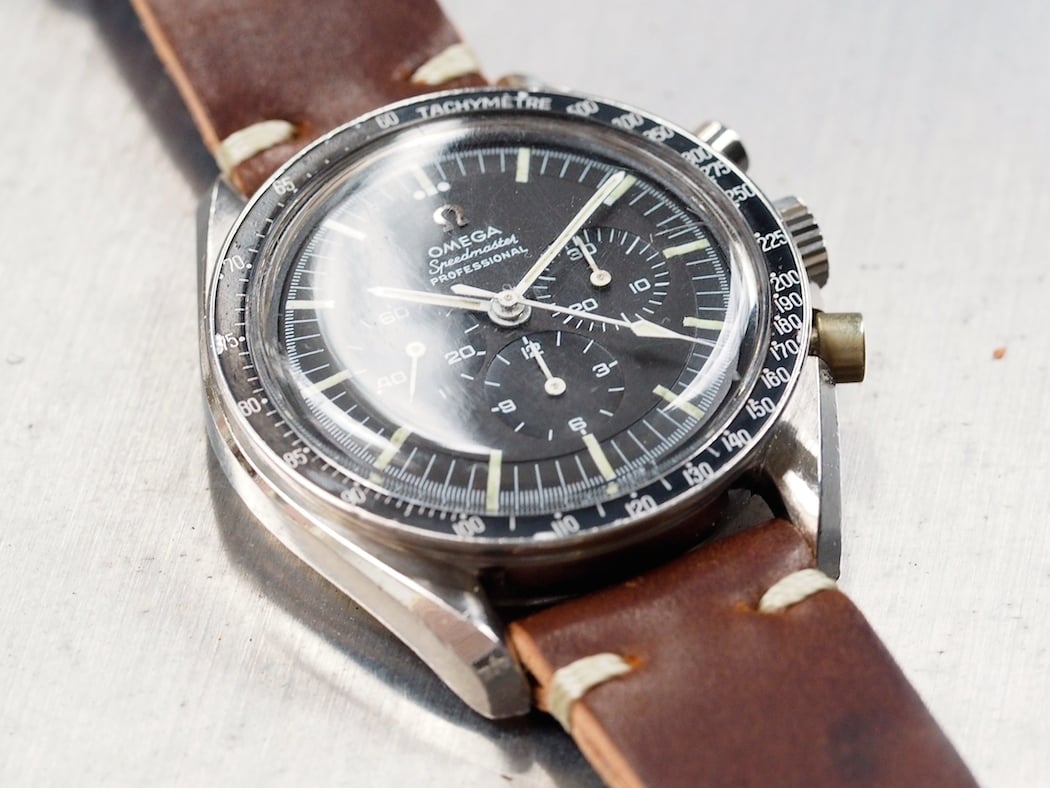 On a strap, the Omega Speedmaster 145.012 exposes some very deeply curved lugs – I really wanted to own one of these. Note the skinny-legged logo on the crystal.

To be fair, before I located this Omega Speedmaster 145.012, I wasn’t overly concerned with what reference I found. Essentially, I just wanted a correct Pre-Moon with curved lugs, so a 105.012 was an option as well, but prices of these have truly gone crazy. So, a 145.012 was my destiny. This model was actually made longest of the column-wheel equipped 321-calibre models (1967-1969) and that’s likely also made them the most “affordable” as well. The most notable difference between these and the earlier 105’s are the use of pushers of the same size as today’s model versus the 105’s stubby, flat operators. Additionally, the 105, for a brief period of time saw Omega using two case makers to create some slight differences in lug appearance. Of course, the other large distinction is that the 105 did go to the moon first, but I was racing time and had a budget in mind. In the end, I really just wanted something correct with a 321 and curved lugs. 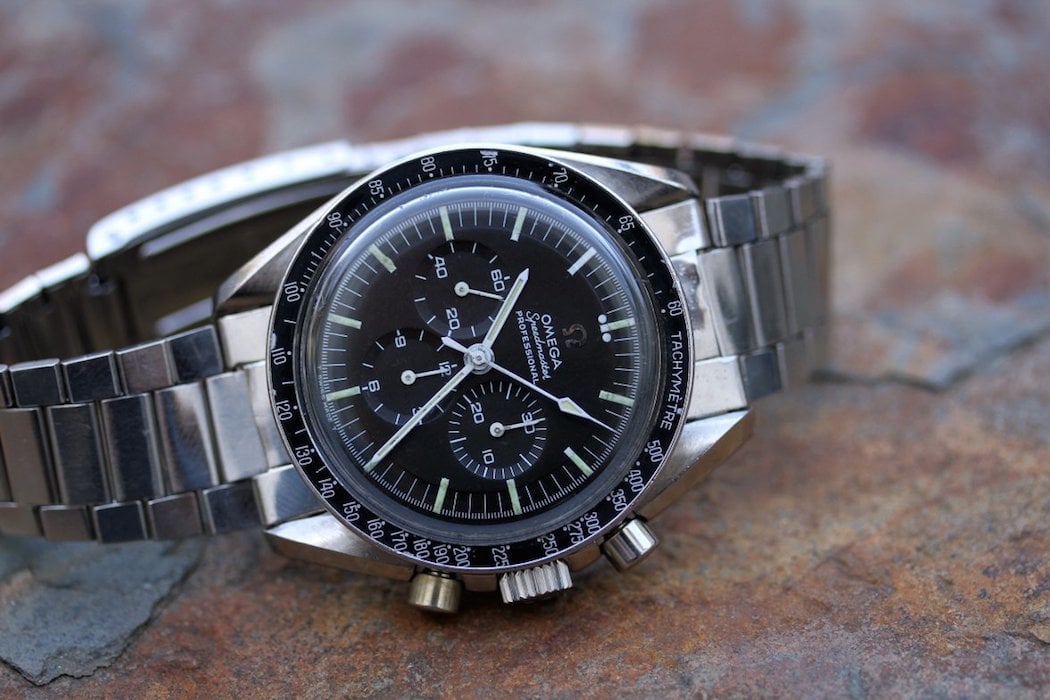 Speaking of timing…I bought the Omega Speedmaster 145.012 (a 67 SP) before you on December 11, 2015. This was 4 days before the “Speedmaster 50” auction, so I literally snuck in under the wire. I ended up buying it from Kirill, aka “Lunar Oyster”, and found it on Omegaforums (actually one of the best places to find a vintage Speedy – surprise, surprise). The transaction was as smooth as silk and the negotiation was friendly, fair and speedy (sorry about that). Yes, it’s fair to say that I’d recommend Kirill and I need to thank Robert-Jan for the “thumbs-up” when I asked him about Kirill’s reputation. I won’t reveal the price, but if you scroll through the Omegaforums history, you can get a relative idea. 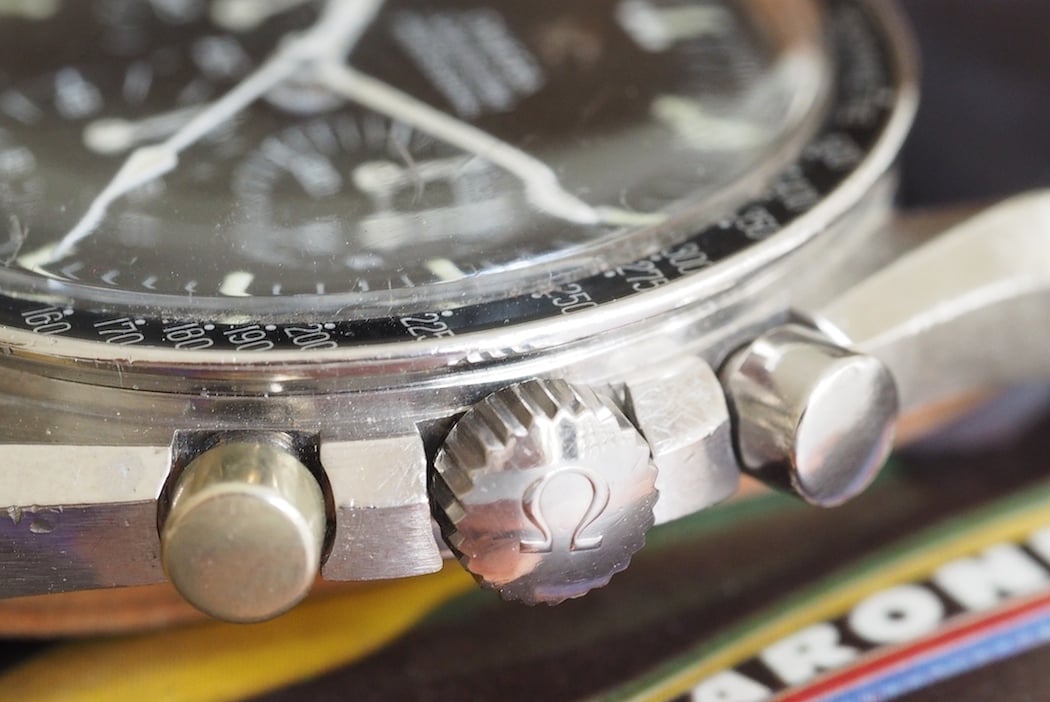 An original crown on an Omega Speedmaster 145.012

The Omega Speedmaster 145.012 on these pages is what I’d call a very “honest” watch. It’s definitely not NOS and it’s not going to win any concours awards, but from what I can tell, it’s highly original and it has the type of patina I enjoy. It actually came with the now-prized 1039 bracelet, otherwise known as the hair-puller, and correct endlinks. As I like the copious fur on my babywrists, the 1039 now does time in a drawer, but I like that fact that I have it. Some other niceties are the original crown, the very original pushers (check out the brassing on the lower one – yep, Speedy pushers are plated), and a polished and scratched Omega crystal. 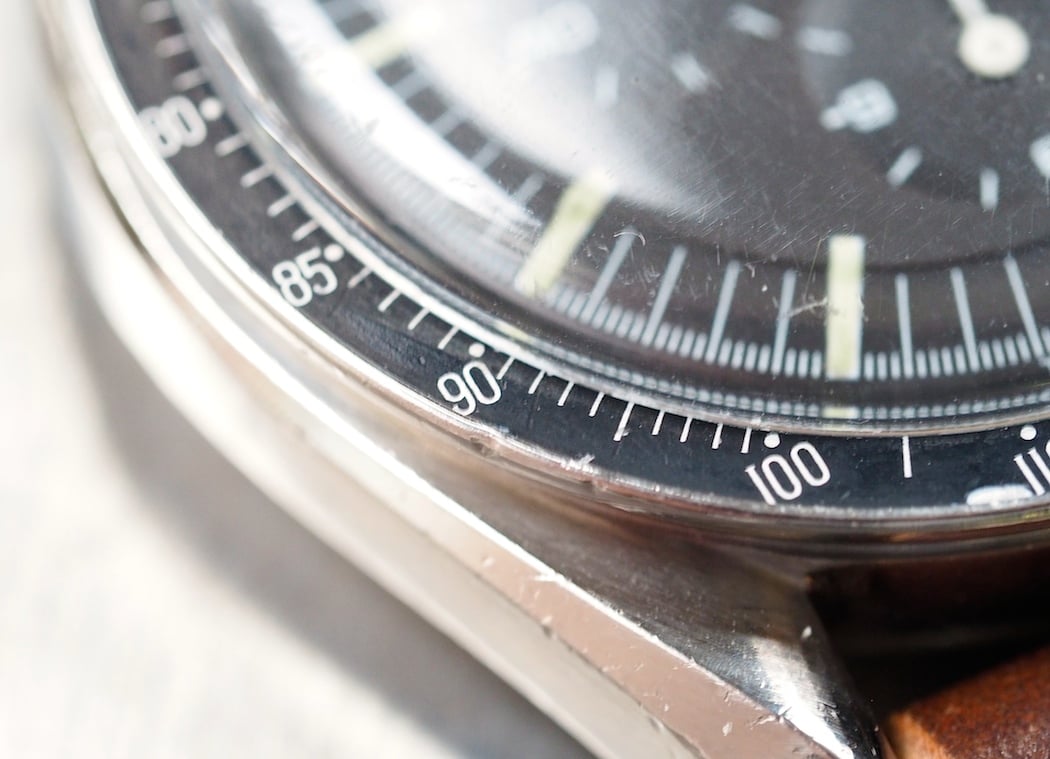 The “DON” bezel on the Omega Speedmaster 145.012 – such a silly but important detail

Other niceties on this Omega Speedmaster 145.012 are the much-discussed Dot-over-ninety “DON” bezel with some love taps and minor chips. I also like the original hands with spear-end/drop-end chrono hand (so many of these have been replaced with flat-end hands) and don’t even mind the lume loss on the minutes hand. The dial definitely displays some lume chipping on the hour markers that so often affects this era of Speedy, but it’s really only more prevalent in certain lights where the remaining tritium still look a bit greenish. That being said, the applied logo is fantastic and the topography of the step dial basically makes these Pre-Moons and Transitionals worth the price of admission alone. Finally, the case back is correct with its single step. 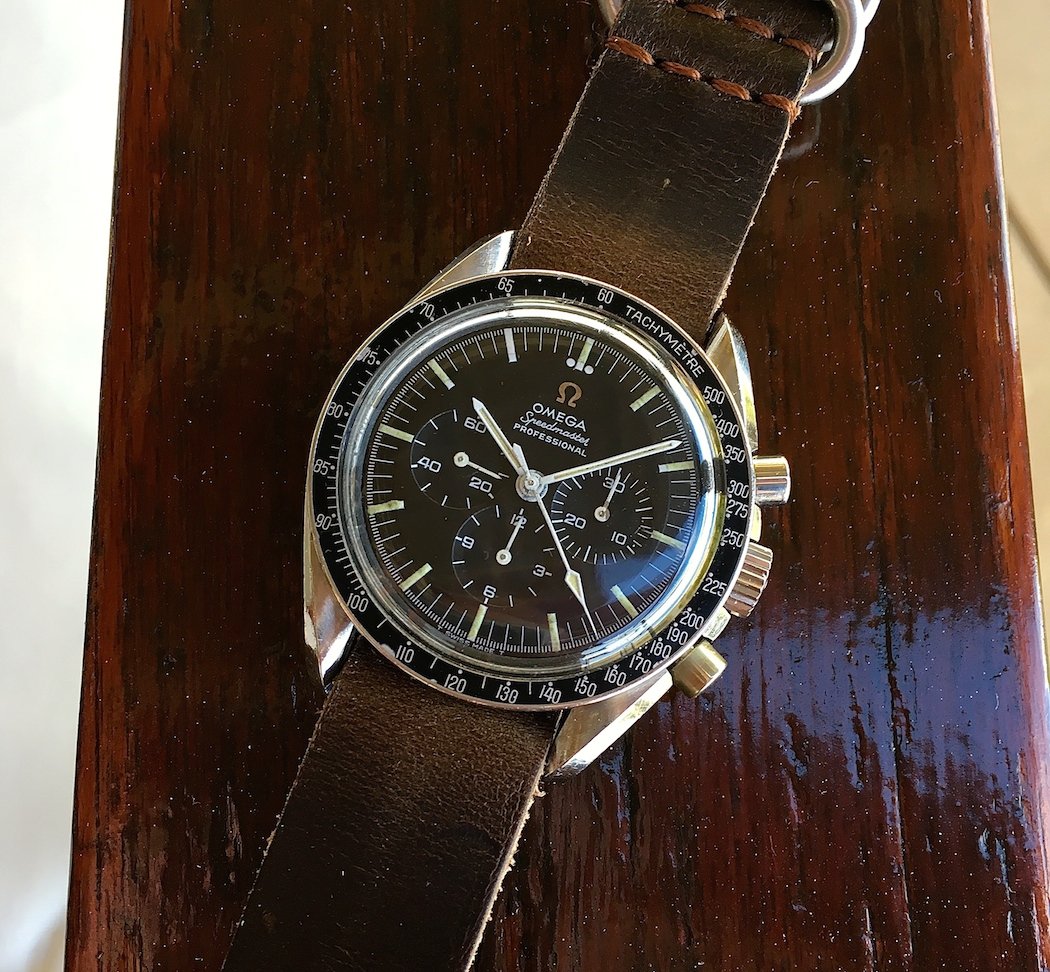 The Omega Speedmaster 145.012 with some typical missing lume at the hours

Ok, so I’ve given you a bit of a report on the “what’s what” on this Omega Speedmaster 145.012, but what do I really think of it? Honestly, it was a great pickup and one that I should have made looooong ago. However, I guess it’s good that I waited because I really did a lot of research and have learned a lot by reading and asking. See all those details I mentioned above? Well, they’re REALLY easy to get wrong. The myriad of updates that vintage Speedmasters have received over the years is mesmerizing. A long hunt can lead one to an attractive watch and then one finds out that a hand is wrong or the bezel is a replacement. Some of you, and I do not fault you – I actually admire you, don’t fret too much about this (again, I’m looking towards Robert-Jan who sees such topical changes like new crowns and pushers as a sign of good servicing vs felonious timepiece meddling), but I would be forever searching for the right parts. That’s a good point to bring up because vintage Speedmaster parts have truly gone scarce – and expensive. 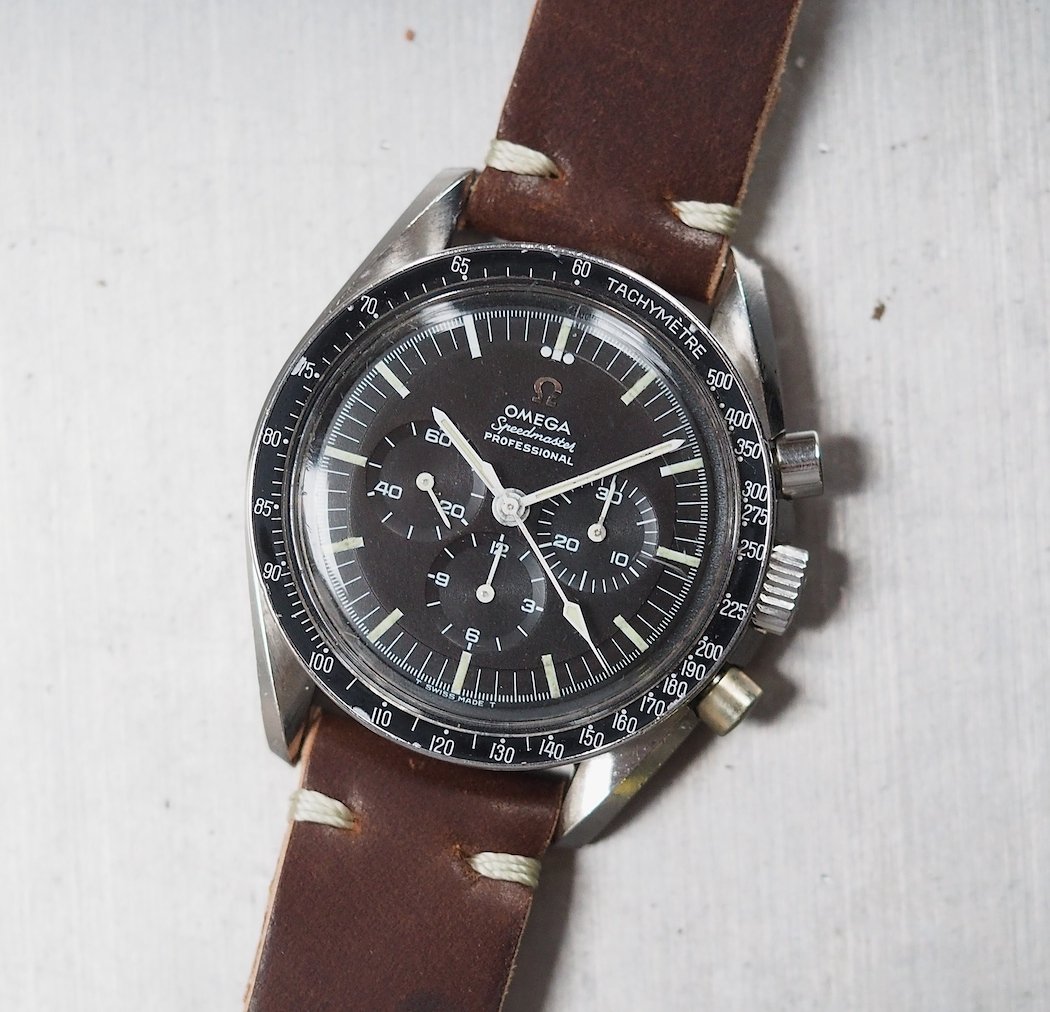 Omega Speedmaster 145.012 on a Rover Haven strap – it’s a watch that looks good with about everything

A vintage watch like the Omega Speedmaster 145.0012 is extremely wearable and why wouldn’t it be? It’s very similar to today’s Speedmaster Professional with a similar 42mm case and friendly 20mm lugs. The big curved lugs come off as pontoon-like and the show of some dents and wear on this piece add character that newer pieces lack. I’ve paired this watch with everything from one-piece straps from Crown and Buckle to the lovely brown shell cordovan from Rover Haven and it always looks good. It’s also one of those few sports watches that dresses up and done with true ease. Finally, there’s just something neat about wearing such an iconic watch that most people would casually dismiss as any old Speedmaster. 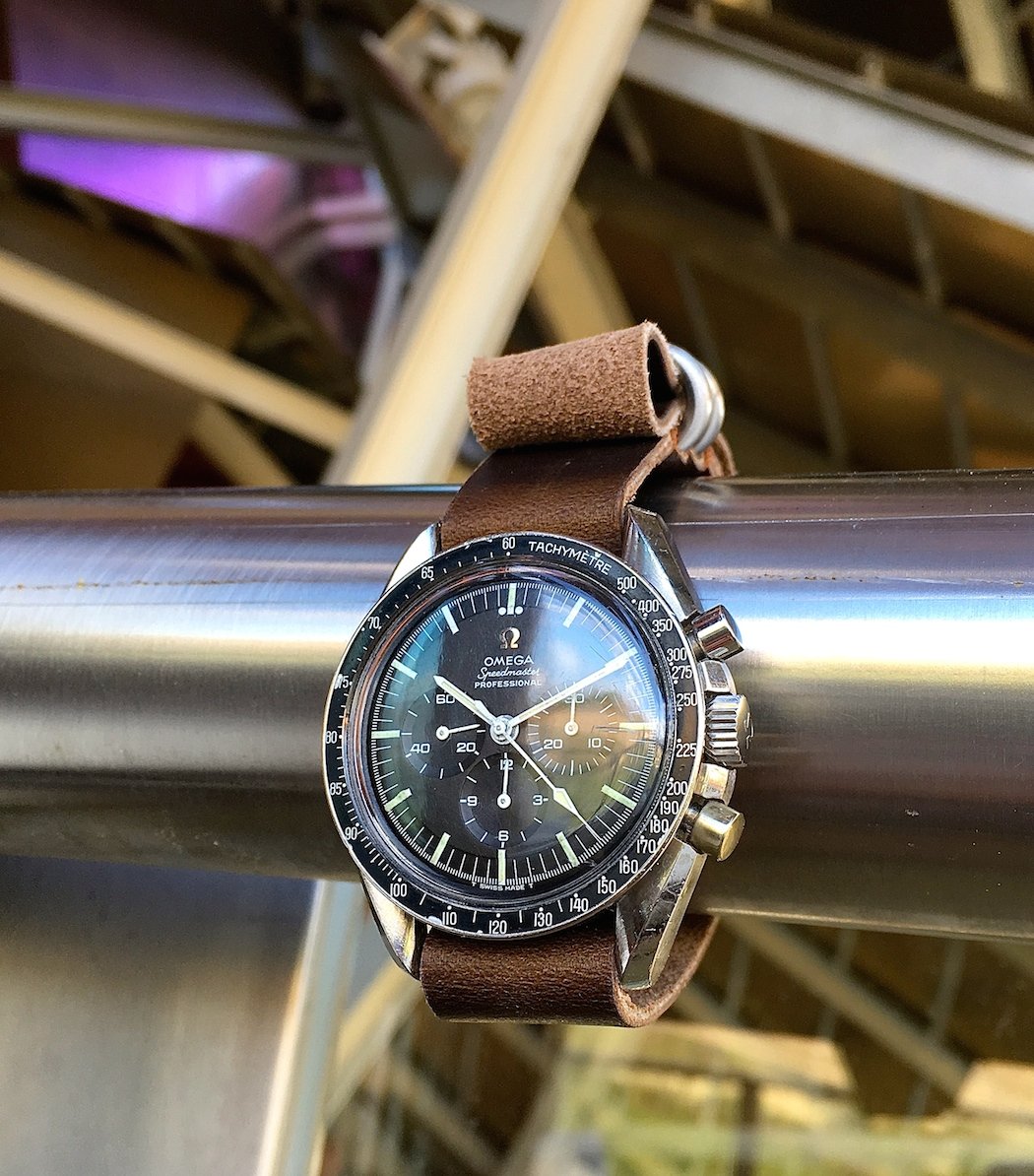 Omega Speedmaster 145.012 against the purple titanium used by Frank Gehry

As mentioned, this is a “go anywhere” watch and I find myself grabbing it with a high level frequency. In fact, I recently took it on holiday over the Easter period to La Rioja, Spain and photographed a bit while being inside the Frank Gehry-designed Marques de Riscal Hotel (incidentally, what a place!). I suppose that the architect can only hope that people look back upon his work 50-odd years later in the same way that people do the Speedmaster. 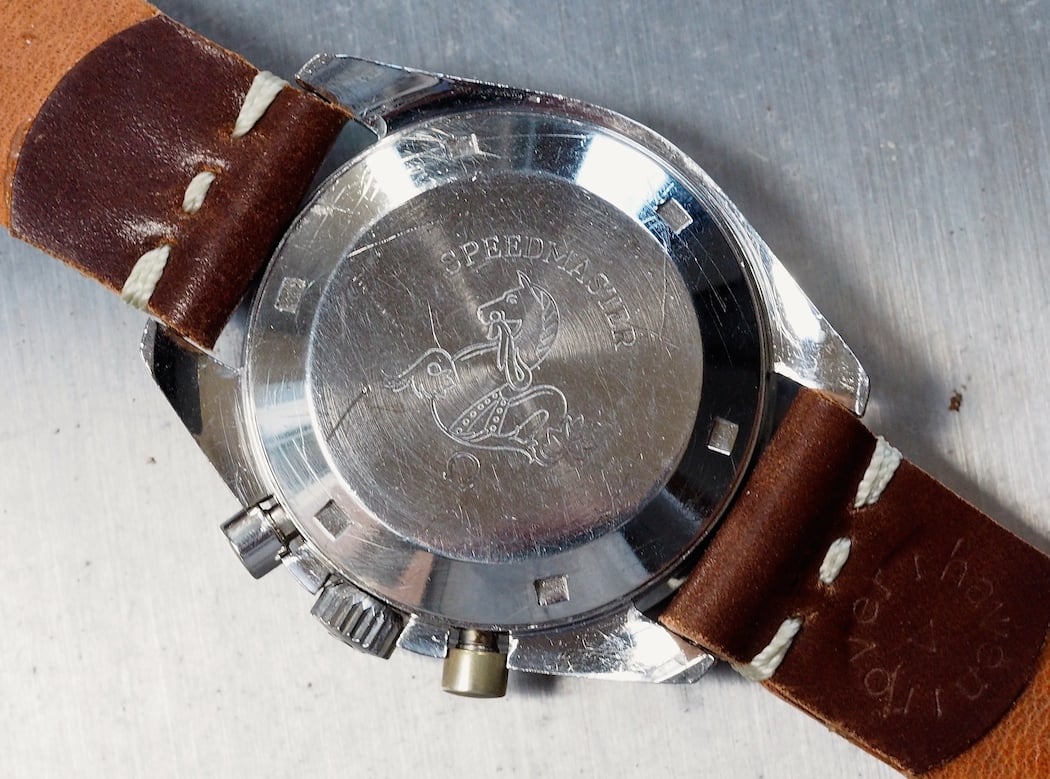 The single-stepped case back of the Omega Speedmaster 145.012

Since buying the Omega Speedmaster 145.012, prices have continued to climb. These were $3,000 – 4,000 little more than a year ago. They then began a slow rise upwards and did a hockey stick price-wise after the Christie’s auction. Now, it seems that everyone is looking for a vintage Speedmaster and prices continue to increase. Today, figure on at least $7,000 for a decent, original model and that may or may not include an original bracelet. Sales results seem to be all over right now where a well used/abused model sells for a higher amount than a seemingly more presentable piece. Call it panic buying or perhaps the results are due to someone falling in love with a certain color or patina that the worn model has acquired. In any case, there’s a frenzy now over a model that I think is a real must for any collector. Servicing a vintage Omega is certainly doable, but parts are becoming more and more of a challenge as Omega has apparently cut off the parts accounts to those who previously had availability. So, watchmakers seem to be working off of their stocks or fishing the same waters as others for needed components. 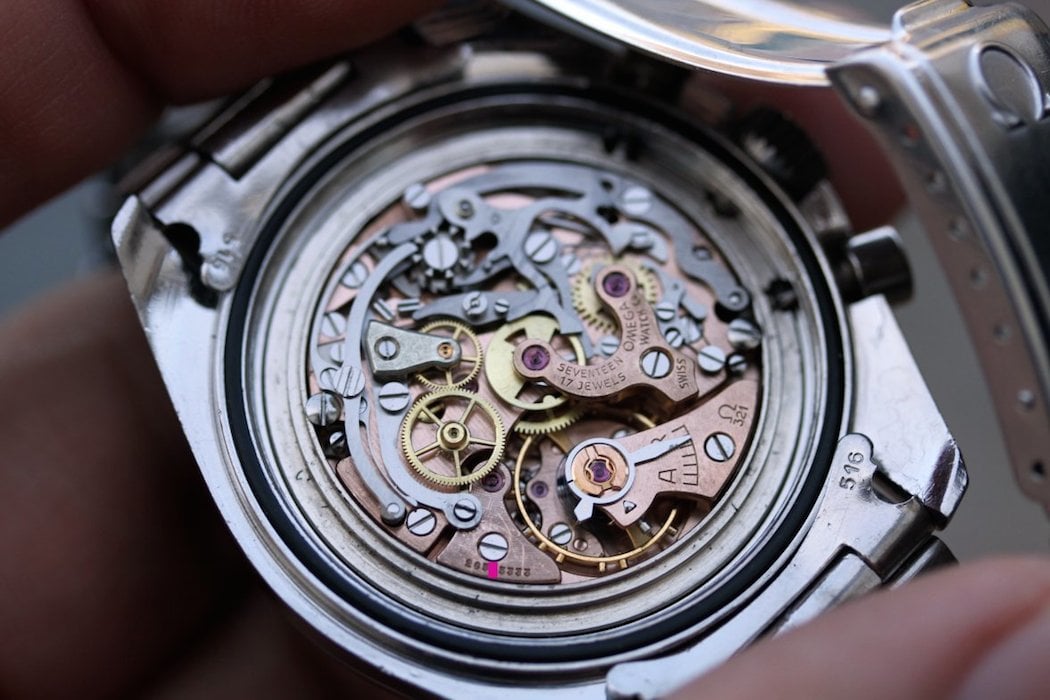 Take a look at my piece and you’ll note that the hour subregister is starting to creep, which is a common malady for these 321’s, so a service is definitely in order. I have another 321 in right now, so I’ll get a firsthand opportunity to see how difficult (and expensive) this is… Regarding cosmetic parts, get ready for expensive and nonexistent. The famed “DON” now commands over $1,000 for relatively abused examples and we’re seeing that continue to rise. Original tritium hands and correct spears are also becoming like hen’s teeth as well, so if you’re buying a watch with cosmetic issues and expecting to solve them quickly and cheaply, then I’d advise you to look for a different watch. 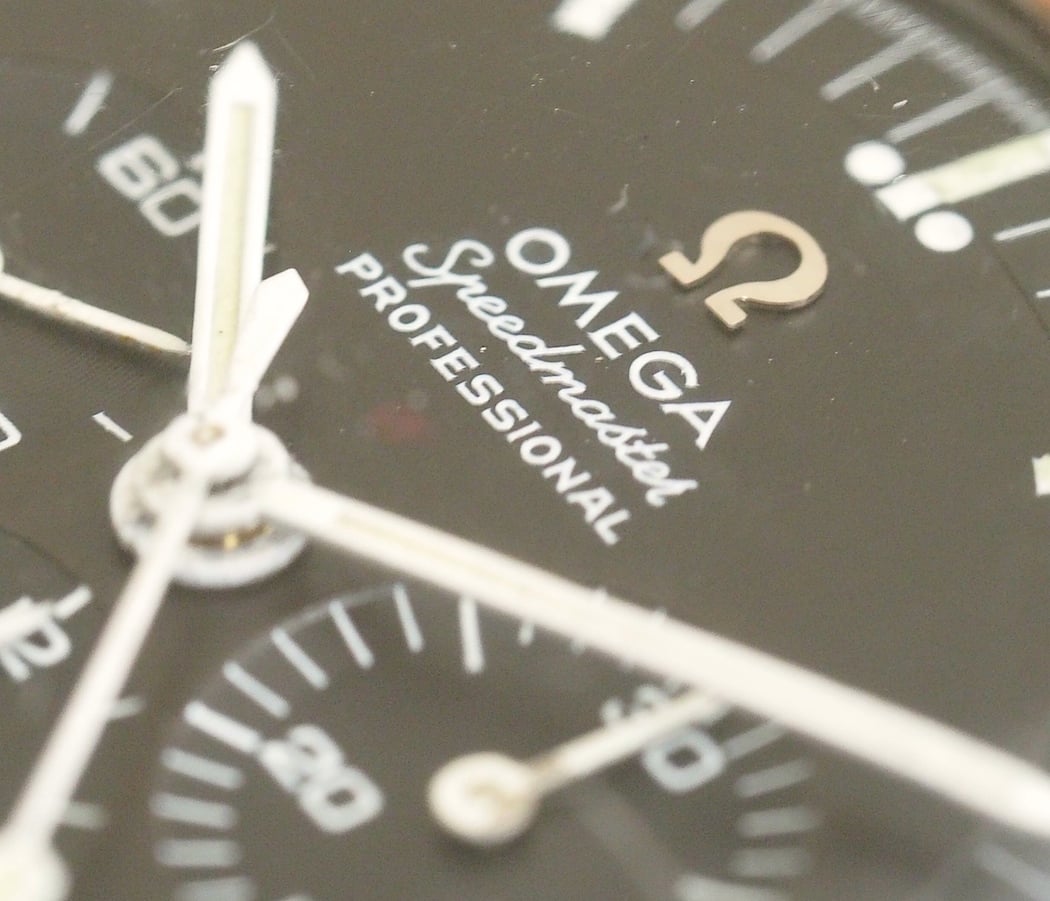 Another view of the Omega Speedmaster 145.012 applied logo

As always, ask ask ask when it comes to vintage pieces like the Omega Speedmaster 145.012. Omegaforums is a good place to ask, although I do find the crew to be a bit hard on pieces at times that might end up being a bit better than at first glance. Incidentally, I say this more in reference to overall condition opinions versus whether the watch has the right parts or not. Still, it’s a wise idea to ask as I cannot tell you how many postings come up from first time posters who are so excited about their purchase only to be told that it has brand new hands, wrong bezel, etc. Don’t be that person!  Also, be sure to check out Speedmaster101.com as it’s a great reference too.

Well, there you have it – my brief journey to Omega Speedmaster 145.012 ownership. It’s a legendary watch that deserves its place on the watch pedestal for sure. Try not to look at the search as a tedious thing (I sadly did for awhile) because once you find the right one, it’s highly rewarding. Plus, you’ll actually miss the process that you likely undertook to find out as much as possible before plunking down your cold hard cash. Until next week…