And a bit forgotten as well...
Tomas Rosputinsky
comments 4
Share

The Pierce Chronographe is the result of persistence and curious genius. It’s important, yet underrated, unusual, but cute. It is an original and pretty timeless watch. But, it’s also a watchmaker’s nightmare…

It has a striking arrangement of sub-registers that stood out from miles away in the late 1930s. From today’s perspective, the double-pusher Pierce Chronographe also introduced a surprising reversed operation of pushers, where the reset pusher sits on top. Count in the world’s first integration of a vertical clutch in a wristwatch and you get a highly flammable collecting target. The surprisingly decent price tags swinging around a criminally low $1,000-$1,500, however, don’t seem to suggest that. Why is that so? Let’s crack this mystery together. 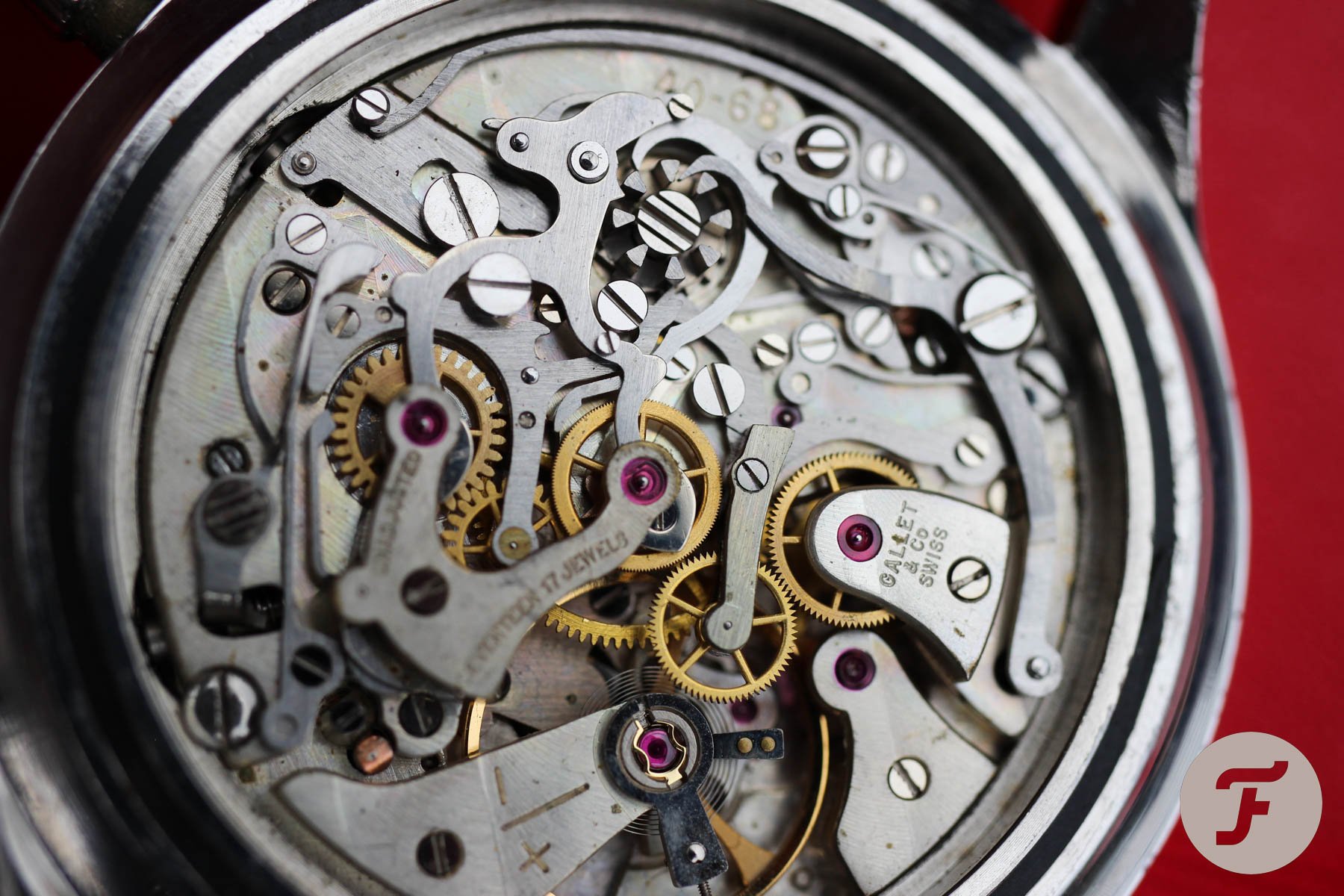 A bit of theory first

To put a chronograph into motion, the chrono wheel has to engage with the powering gear train. This can be achieved by means of a clutch, either of a horizontal or vertical variety. The horizontal clutch is very seducing, as it reveals the magic of a toothed wheel biting into another wheel on a larger area. When my poorly educated eye can follow how each component works and how it links to the other, it gives me a very enlightened feeling. You can see this in a Patek, the El Primero, or my favorite Excelsior Park EP 40.68.

Then you have a vertical clutch, which makes you feel like you don’t really understand a chronograph. But it also gets rid of that disturbing introductory jump of the central seconds due to the imperfect coupling of the sharp-toothed wheels. Unlike with the spacious horizontal clutch, with a vertical coupling, everything happens concentrically on the same axis. Imagine the chronograph wheel hanging above the drive wheel. Simply put, the moment you activate the chrono, the clutch falls down and both wheels start moving together.

The vertical clutch stops the chronograph from stuttering, reduces amplitude loss, and prevents excessive wear and tear of the sharp-toothed components. It’s safe to say you are more likely to find them in premium-priced watches. Speaking of vintage, your good old Seiko 6139 Speedtimer has one too. 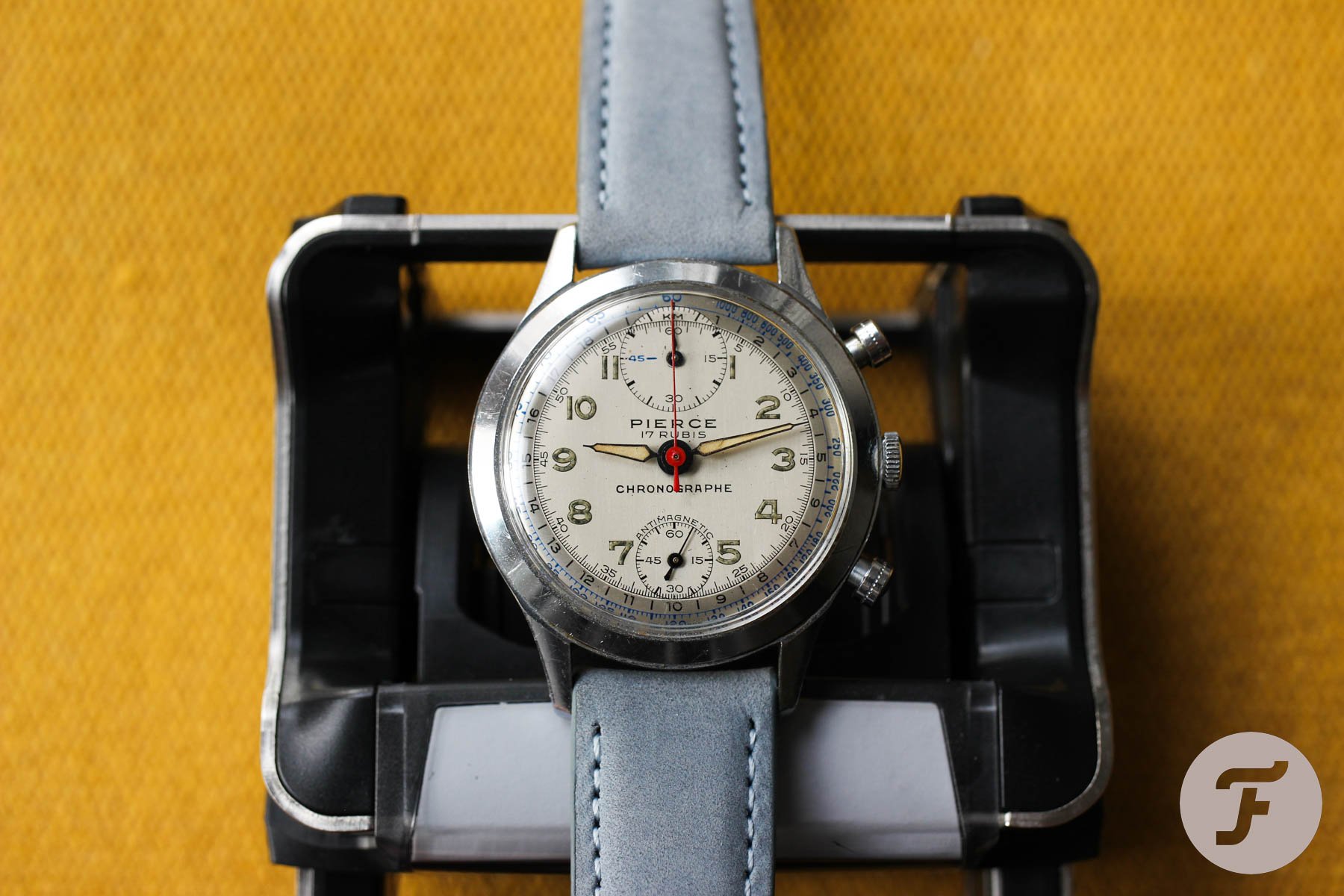 Why is the vertical clutch today’s point of interest?

It was neither Longines nor Omega who filed a patent on an innovative chronograph coupling system back in 1935. Premium watch brands had their eyes set on the Olympic flame and the forthcoming 1936 Olympics in Berlin. Pierce looked the other way and saw a huge opportunity in offering a fairly priced chronograph to the masses doing sports in their backyards and local playgrounds. In 1936, the Pierce Chronographe hit the market with an unconventional but reliable vertical coupling system that allowed the brand to simplify the movement and get rid of some parts.

The Pierce caliber 130 was manufactured and completed in-house, which is a huge achievement even today, let alone back then. Pierce was proud of the fact and it ended up serving as the idea behind the “scaffolding print”. As an idea maker and ad copywriter by profession, I have to admit, that this print that highlights the stamping, milling, or turning all parts by Pierce under one roof is one of my all-time favorite vintage print ads ever. Try to google it yourself — the amount, variety, and creativity of the ads promoting the Pierce Chronographe are impressive. I’ve never found estimates on production numbers, but I guess the massive advertising also confirms that the Pierce Chronographe was an instant success.

The first models were single-pusher chronographs operated with a lengthy rectangular button at 4 o’clock and early 130 calibers. They seldom resurface in untampered condition, and these will understandably fetch the highest price. The double-pusher version with round pushers and its signature “perforation” design came around 1939. In 1943, the Pierce Chronographe got a new sporty case, as you can see in my example. The lugs are way longer, and as a result, the Pierce Chronographe looks more mature and less obsolete.

I don’t remember the last time I saw nice, shiny, untouched pushers on a Pierce Chronographe.

The Pierce Chronographe was in production throughout the 1950s and you will most often find them available in ugly chrome-plated cases. They are all so worn that it really hurts to look at them. I don’t remember the last time I saw nice, shiny, untouched pushers on one. The case has a nostalgically beautiful oval case back that brims to the edges with an aviation spirit. Consider yourself lucky if you find intact pieces and doubly lucky if you find the most sought-after waterproof cases, usually featuring four screws on their backs. 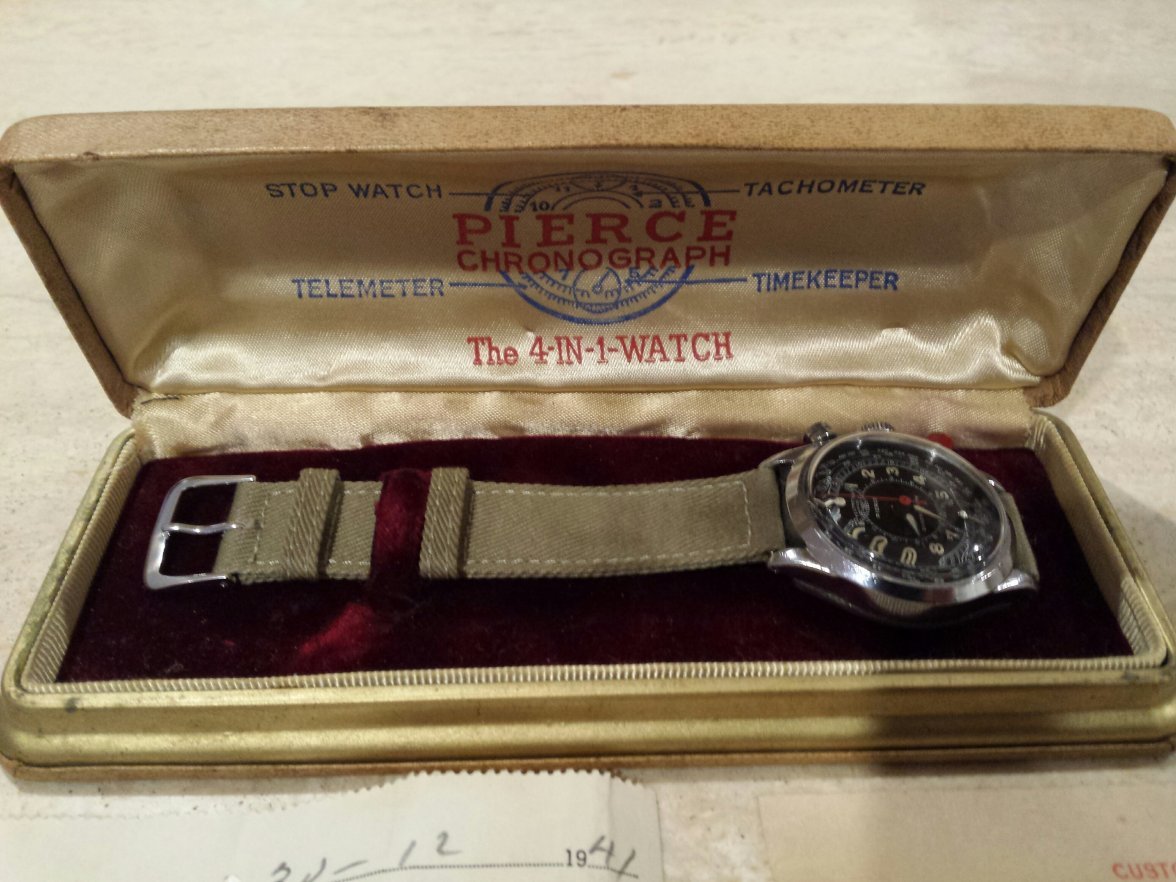 As seen in the picture above, the Pierce Chronograph was marketed as a 4-in-1 watch, and it included both tachymeter and telemeter scales. The telemeters were calibrated to either miles or kilometers, with earlier models having a “snail” telemeter scale in the center. Later ones, like mine, have the telemeter sandwiched between the tachymeter and the minute track. The so-called Pierce “Up/Down” chronographs got their nicknames not only from the reversed pusher setup but also from the sub-dial positions. 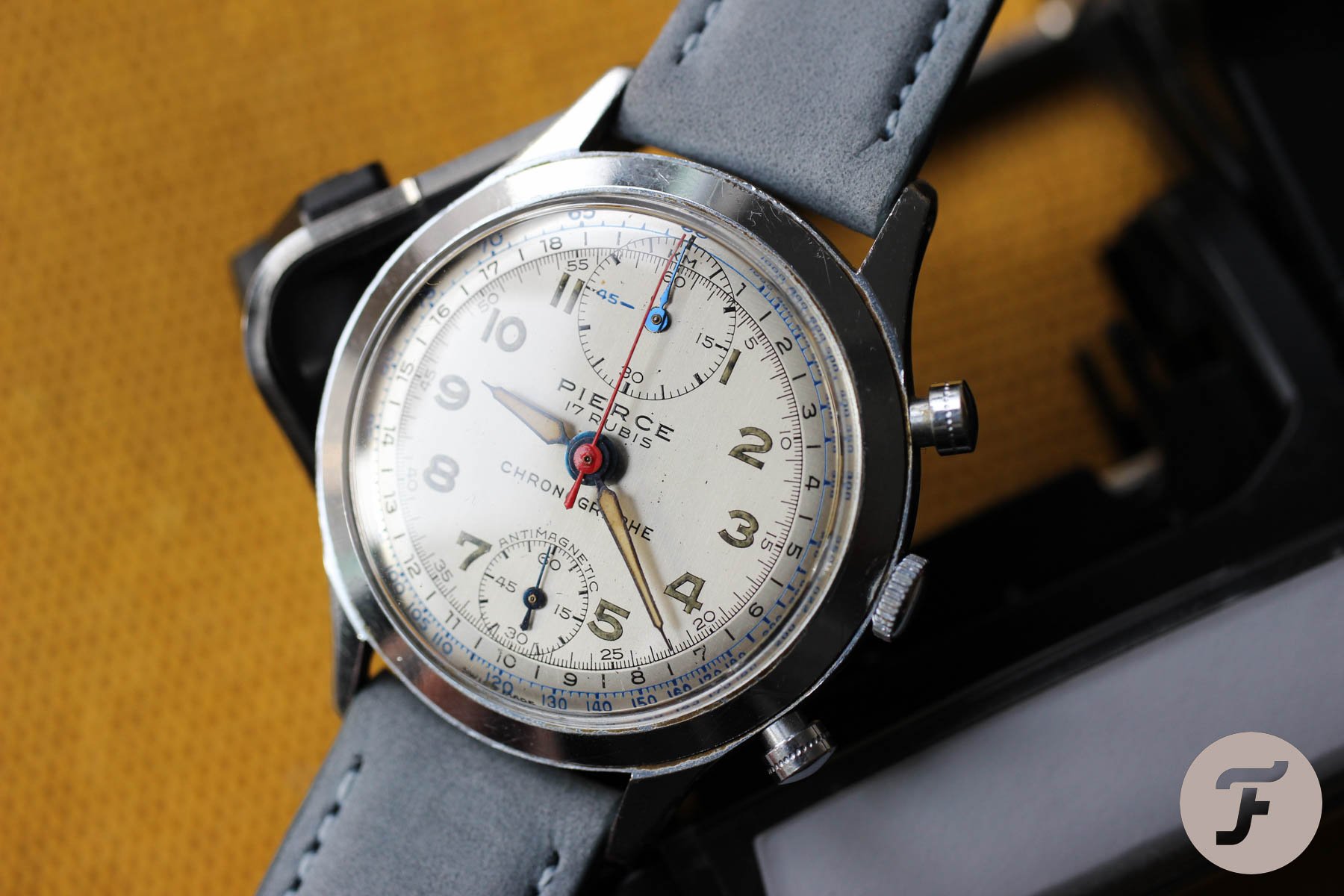 I really do love is the sub-dial proportions. Notice how tightly the tiny small seconds sit at the bottom. The sub-register touches neither the 5 nor the 7 o’clock index and just about gently kisses the big minute track. The same happens above, with the difference of the 11 and 1 o’clock design that allowed the bigger minute counter to fit much better. This time, it reaches out to the tachymetric track. You usually don’t get to see so much balance and clarity on a dial in such a richly equipped 35mm case. Well, not in the 1930s at least…

The beauty of the dial is in contrast with what you see when you open the case back. I have no formal education in horology, so take my next comment with a grain of amateur salt. No matter how fascinating the invention of an affordable chronograph is, it looks like a pile of random, assorted metal parts. I don’t want to sound disrespectful, and I believe my article proves the opposite, I am just trying to describe how far it landed from the well-assorted standard of fine watchmaking.

Don’t go for a project watch

Whatever you do, don’t get a fixer-upper. I did at first, and I didn’t get far. “The vertical coupling system was a novelty at the time and sometimes it suffered premature wear. Spare parts are almost impossible to find,” write Joel Pynson and Sebastien Chaulmontet. “Many watchmakers hate working on these calibers due to the plastic clutch washer, which was prone to breakage,“ concludes Bruce Shawkey. “The original clutch washers became brittle after some time, and a replacement hasn’t been available for ages. But one can make them from suitable plastic material,” says Dr. Ranfft.

My only real drawer queen

To confirm the concerns outlined above, I can say that the Pierce 130 was the one and only watch my beloved watchmaker refused to service. That “honest” piece I won from an auction has been sitting at the bottom of my drawer for a few years now. Too many missing or broken parts present a dark hole that might be too expensive to cover. Instead, my watchmaker sourced another fine, complete, and fully working example with a caliber 134 for me. Not bad. 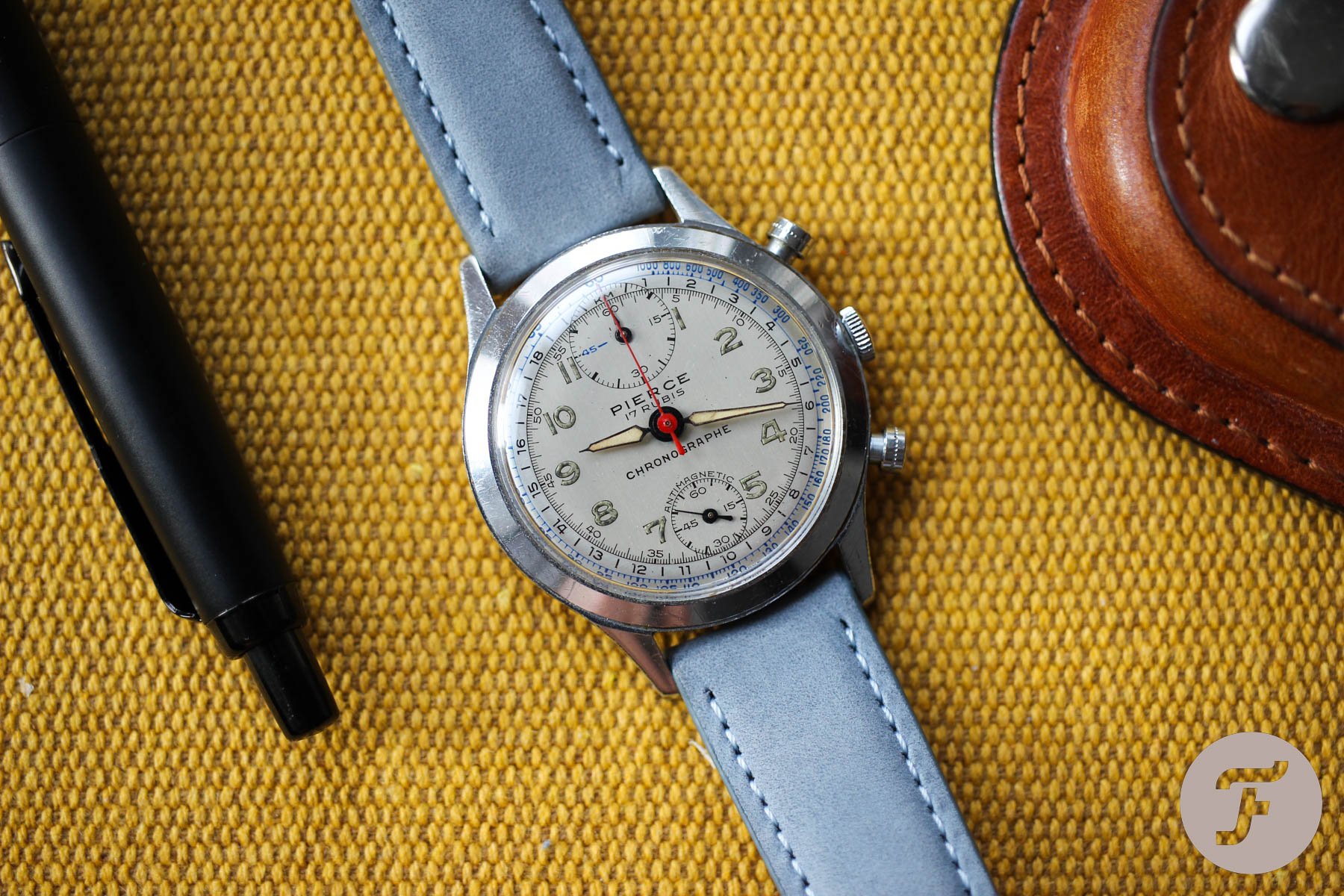 If you want to understand the operation of the Pierce Chronographe better, I won’t even try to explain it. Dr. Ranfft put together a perfect description full of pictures here. Keep in mind that there were quite major differences between the earlier caliber 130 and the later caliber 134, as well as the mono-pusher and dual-pusher versions.

Jeff Grieff explains some of them on the NAWCC forum. “The central chronograph staff assembly (chronograph heart cam and arbor) is slightly different. The mono-pusher has a 6 column wheel, while the double-pusher has 9 columns. The caliber 130 lacks the large brass wheel attached to the minute counter cam. The 134 has a semi-instantaneous minute counter that advances once a minute. The 130 has a continuous minute counter that gears directly into the mainspring barrel. The vertical clutch is also different. The 134 has the much-maligned rubber friction washer in the vertical clutch that always needs to be replaced when these watches are repaired.” 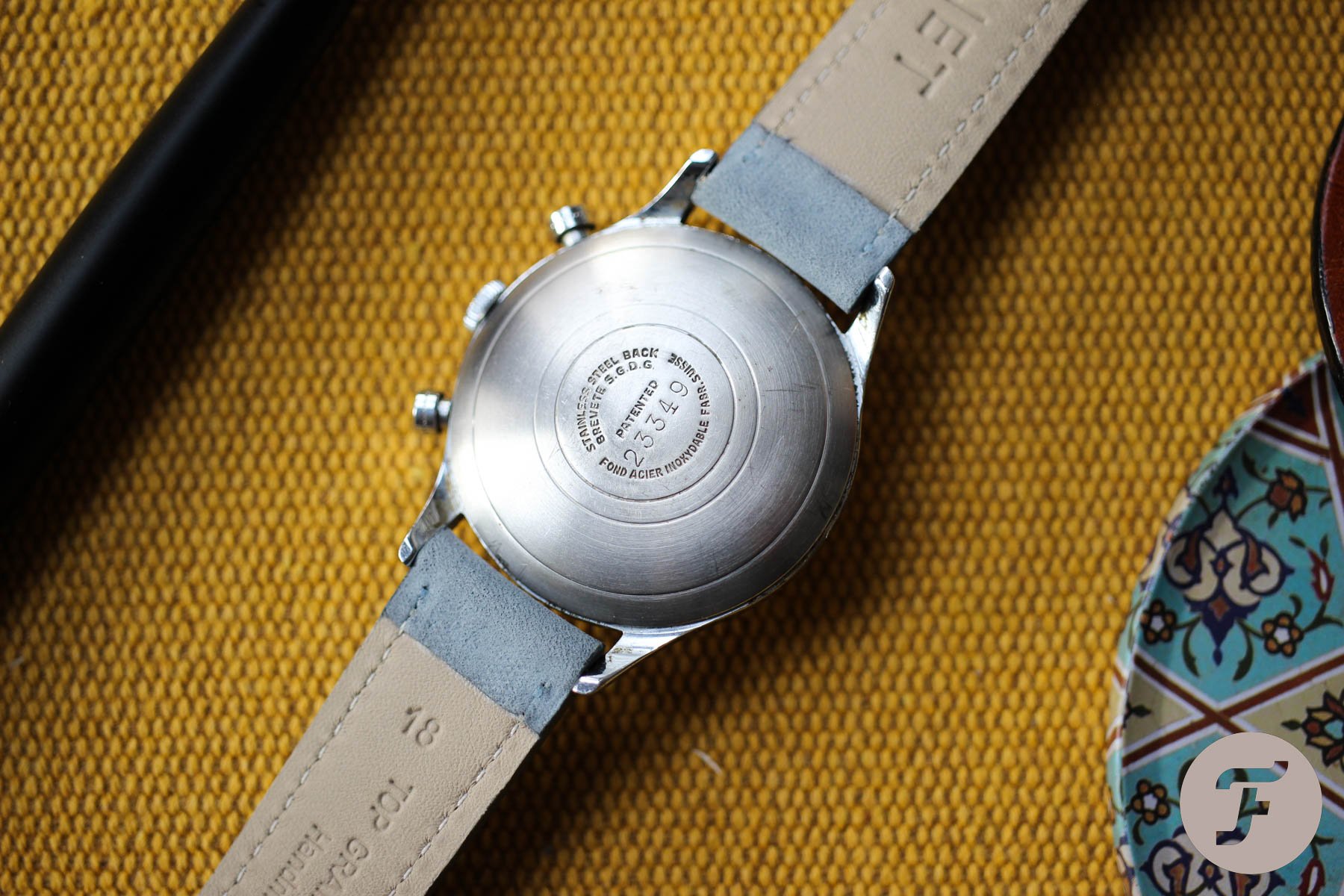 Winding feels a bit awkward, but I have no other example to compare it to. Notice the specific style of the hands, which isn’t seen that often. I was not sure about it, but the pretty unique shape and perfect length suggest it might be original. Since I found it in some watch books, I have no doubts anymore. The four blued hands and the red chronograph seconds hand are a perfect combination over the bright dial. There is also a black-dial version, which is even more scarce.

The Pierce Chronographe, at least this later version, wears perfectly. The aesthetics combined with a twisted pusher operation is just fantastic. The story behind the unusual movement is catchy too. Oh, and did I mention that the chronograph measures up to 60 minutes? That’s something too! Happy hunting.

Hot Topics
Introducing: The Omega Speedmaster Super Racing With Spirate System
165 comments
New Release: The Limited-Edition Seiko Prospex SLA067J1 Diver
65 comments
My Predictions For New Omega Speedmasters In 2023
60 comments
The Best Independent/Microbrand Alternatives To The Rolex Explorer In 2023
53 comments
The Time To Buy Is Now: How The Current Economic Climate Influences Watch Buying And How You Should React
51 comments
Popular
(From The Archives) Shut Up & Read The Truth About Cartier Watches
George Cramer
21
Grand Seiko SBGA211 ‘Snowflake’ And Why I Didn’t Buy It
Robert-Jan Broer
23
New Hamilton Intra-Matic Auto Chrono – An Introduction (with live pictures)
Balazs Ferenczi
13