If you’ve been a relatively faithful reader of #TBT here on Fratello Watches, then you likely recall some of the articles I’ve penned on Gallets equipped with Excelsior Park movements. We’ve reviewed several Multichrons including the 12, the 12HR, and a beautiful Decimal and all were equipped with ultra-smooth “EP” movements. What I believe I’ve explained before is that Excelsior Park built watches, using their own movements and cases, for companies such as Gallet, Zenith and Gerard Perregaux, but they also sold pieces branded with their own name. These truly “in-house” pieces don’t seem to come up for sale as frequently, but they’re attractive in their own way and often feature dials nearly identical to those found on watches made under contract by the firm. Today’s watch is different though – much different – because it contains one of the more attractive and rare dial styles I’ve come across. Let’s take a look at the lovely Excelsior Park Tuxedo Dial Chronograph. 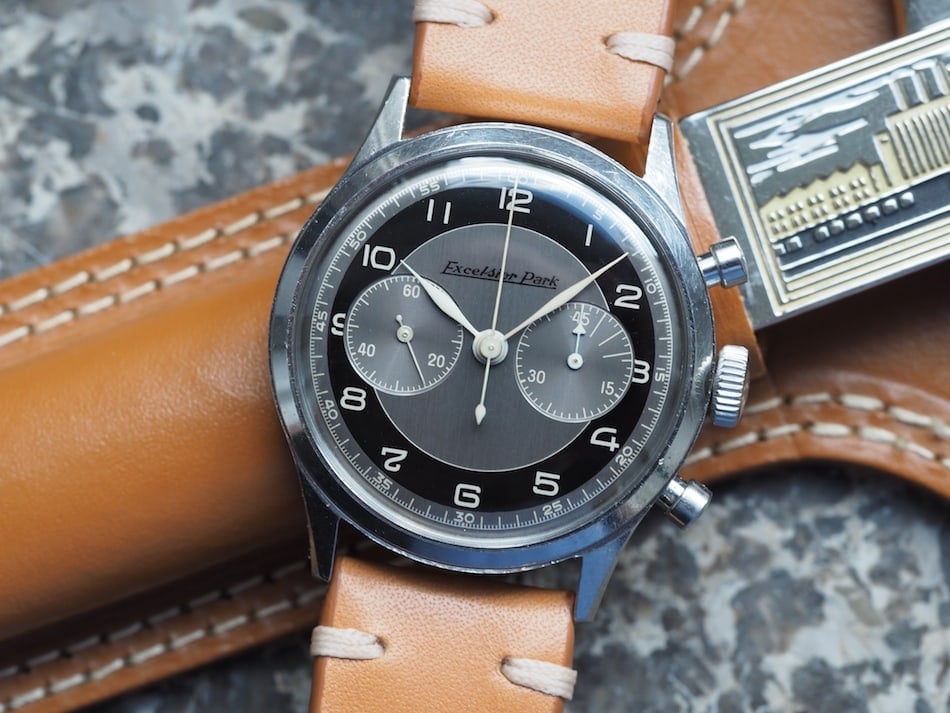 First off, let’s talk about the formal wear reference found within the name of the Excelsior Park Tuxedo Dial Chronograph. For decades, watch companies such as Tudor, Lemania, Rolex, and others have employed the design of encircling a white or silver dial with a black ring. The same silver or white often, but not always, surrounds the black ring to the edge of the dial. The black ring generally includes the hour indices and the central lighter portion is left mostly bare. Still with me? What it creates is a truly contrasting look that reminds one of the traditional dark and light (or black and white) tuxedo. 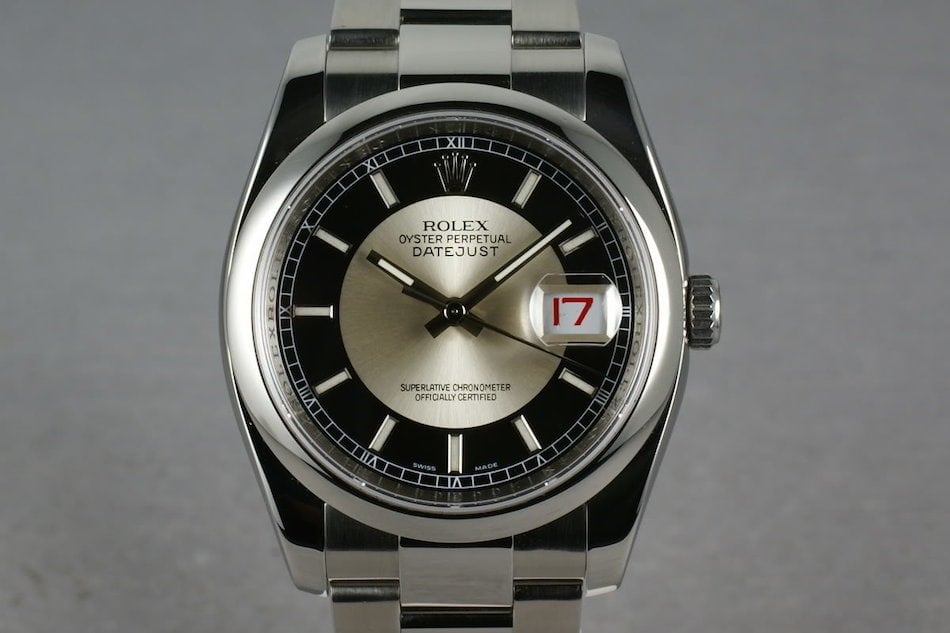 The only current models that come to mind with this look are the Junghans Meister Driver series but not long ago, Rolex produced a Datejust 116234 in the mid to late 2000’s with such a dial. While it’s not amazingly rare, it is a kitschy piece from the otherwise staid brand and it has developed somewhat of a following (hint: better to buy sooner than later). 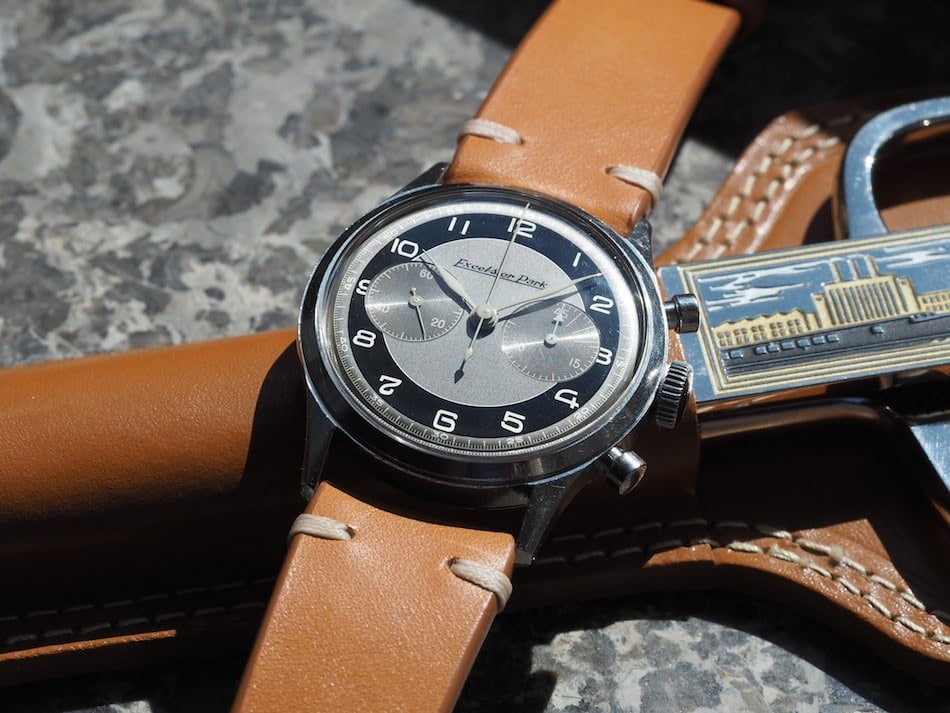 As you can see on the Excelsior Park Tuxedo Dial Chronograph, a silvery grey was chosen as the offset to black and I think it’s stunning. Within the center of the dial, the grey surface exhibits vertical brushing and is only broken up the legendary “Excelsior Park” script. This is juxtaposed against both the black ring and the grey sub registers that contain concentric ridges. Look closer and you’ll actually see that the black ring features a very thin white line on its inner surface to help create decisive separation between the colors. The white matches the sub register numerals as well as the hour font. 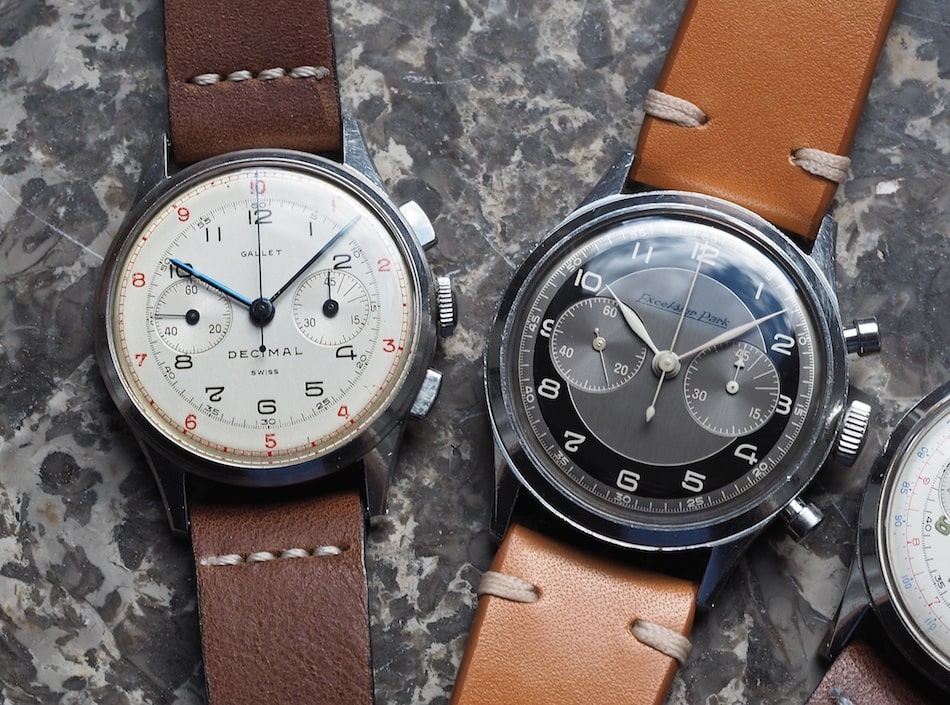 And oh that font! The brand employed some typical characteristics on their watches and the “7” and the “4” are typical Excelsior Park. As you can see the Gallet Decimal features numbers in the same style. 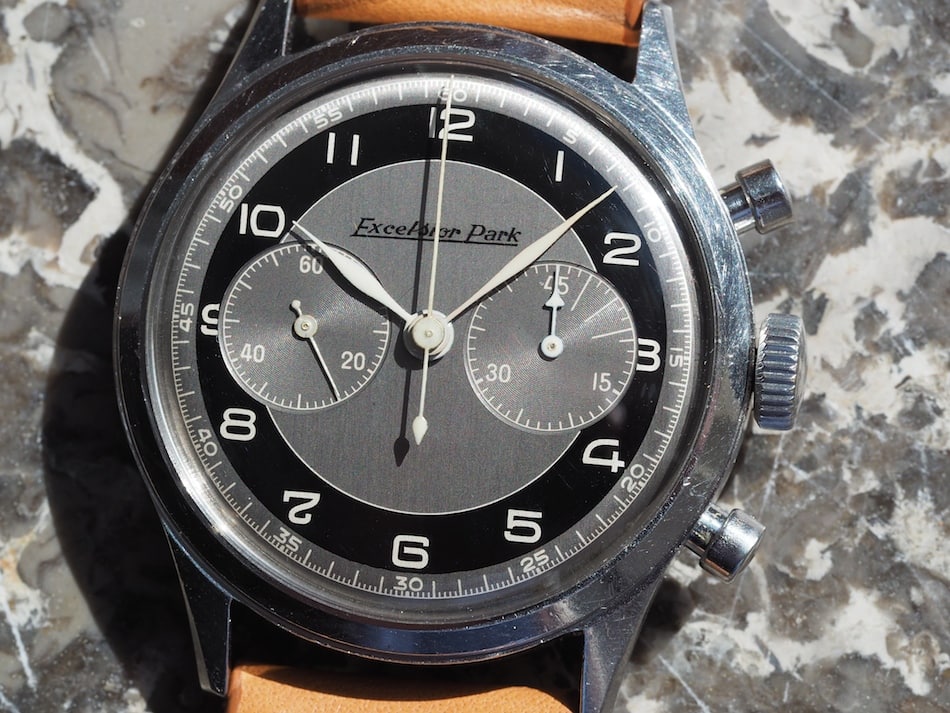 Before buying the Excelsior Park Tuxedo Dial Chronograph (Andreas of Local Time found it at a watch fair and sent me pictures prior to buying it), I really only had one question concerning the watch and that was related to the hands. I did a lot of internet searching, and spoke with @watchfred, within a rushed period – the watch was on hold after all – to check for other examples of this watch and I came upon very few. Some examples contained lume and some did not. And then, some pieces with this dial were in a waterproof case (read: round pushers) and some were house in cases with rectangular pushers. Adding to the complexity, I didn’t have the watch in hand, so it was hard for me to tell if the numerals were lumed. If they had been, the watch would have required lumed hands. In the end, thankfully neither the dial nor the hands contained lume. Regarding the style of hands, I found a similar version that had sold in Spain – and Fred felt the hands were similar to other 1940’s EP’s he’d seen – so I decided to pull the trigger. A nice sign is that the hand lengths match the dial well and each extends to a “track”. The central hands were a mess color wise when the watch arrived, but our watchmaker Paul took a breather from collecting Hermes Birkin bags and brought them back to spec. 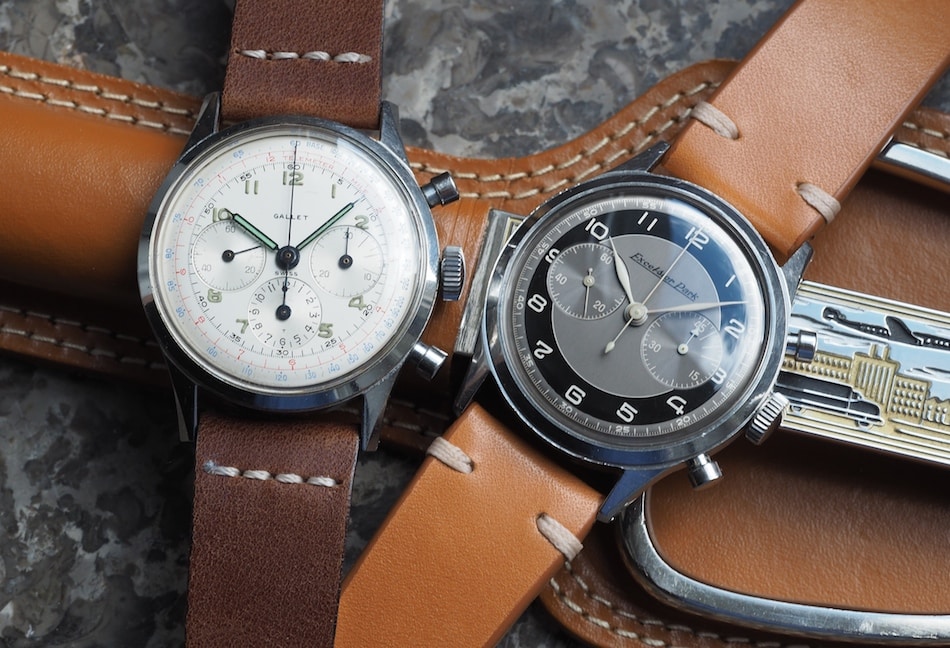 As you can see, the Excelsior Park Tuxedo Dial Chronograph shows a stainless steel case that’s very similar to the Gallet Multichron 12. Those signature triangular chamfers on the lugs are a real “tell” that this was made by EP. Size wise, the case is identical to the Gallet at 38mm in diameter and nearly 44mm lug to lug. Oddly, though, the EP foregoes convention with its 21mm lugs whereas the Gallets stick with the far more versatile 20mm. 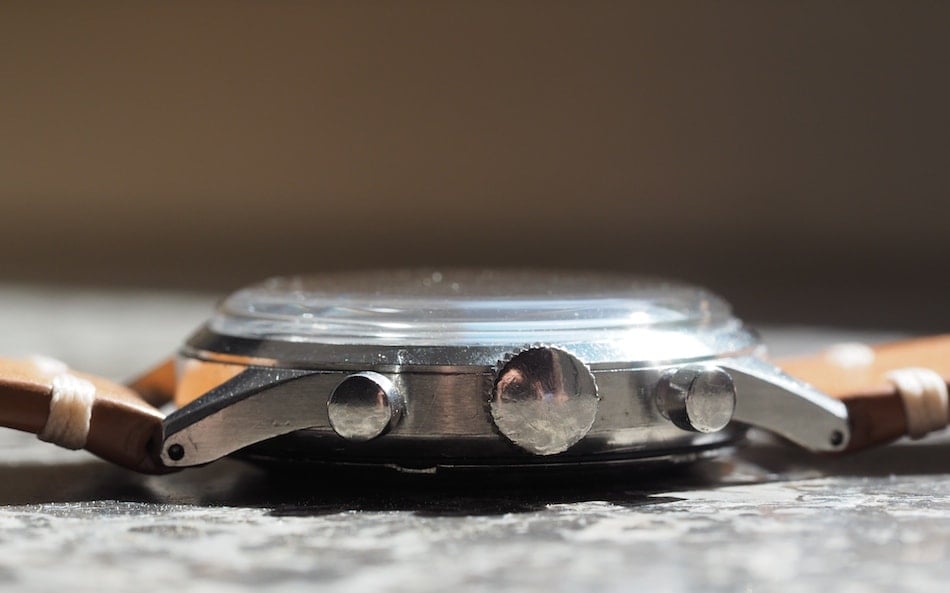 The Tuxedo piece also has drilled through lugholes, which perhaps points to it being from an earlier era than some of the Gallets I own from the 1950’s. 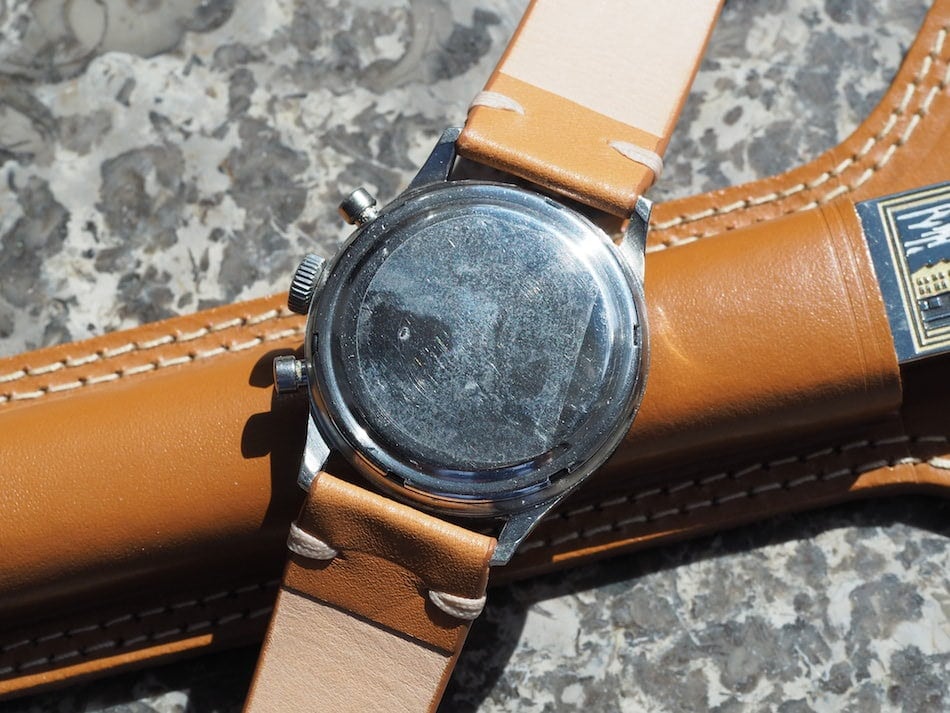 As this is a waterproof version, the case back is of the screw down variety and the pushers are round as well. 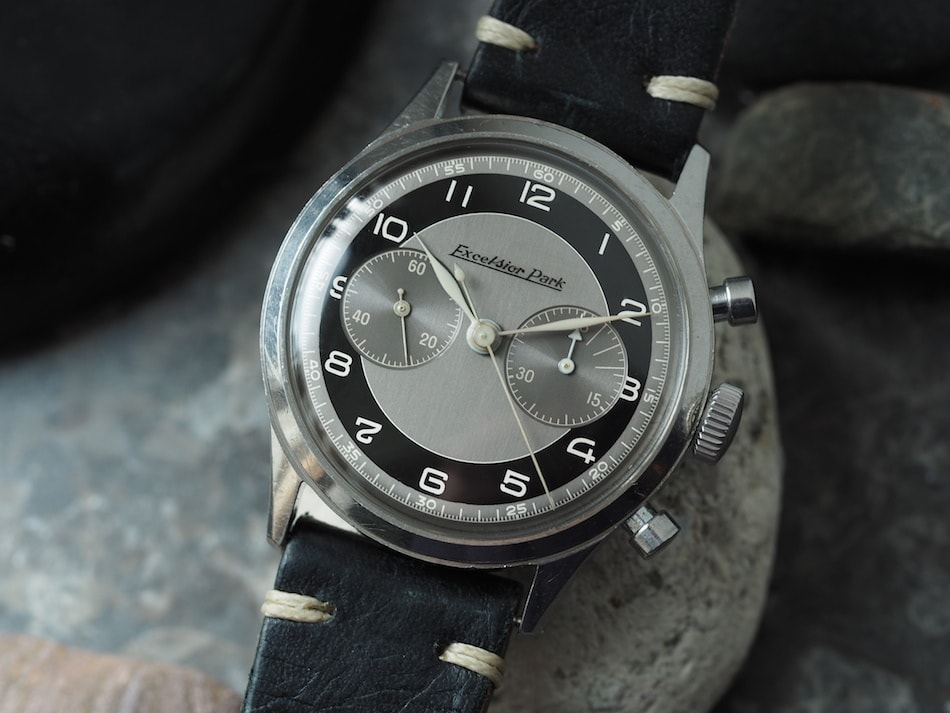 The Excelsior Park Tuxedo Dial Chronograph uses the EP Caliber 4, referred to as the EP4, and it’s basically a two-register version of the eponymous EP40 that we’ve discussed at length. Whether it’s the EP4 or EP40, the movement is silky smooth and, yes, that central chrono hand just glides back to 12:00 when depressing the lower pusher. One thing I have noticed with EP movements is that setting the time feels very mechanical; it’s as if one can feel the gears turning when rotating the crown. It’s not good or bad, but since running into issues with winding pinions and mainsprings on these movements, it leads me to keeping these pieces as infrequent wears. 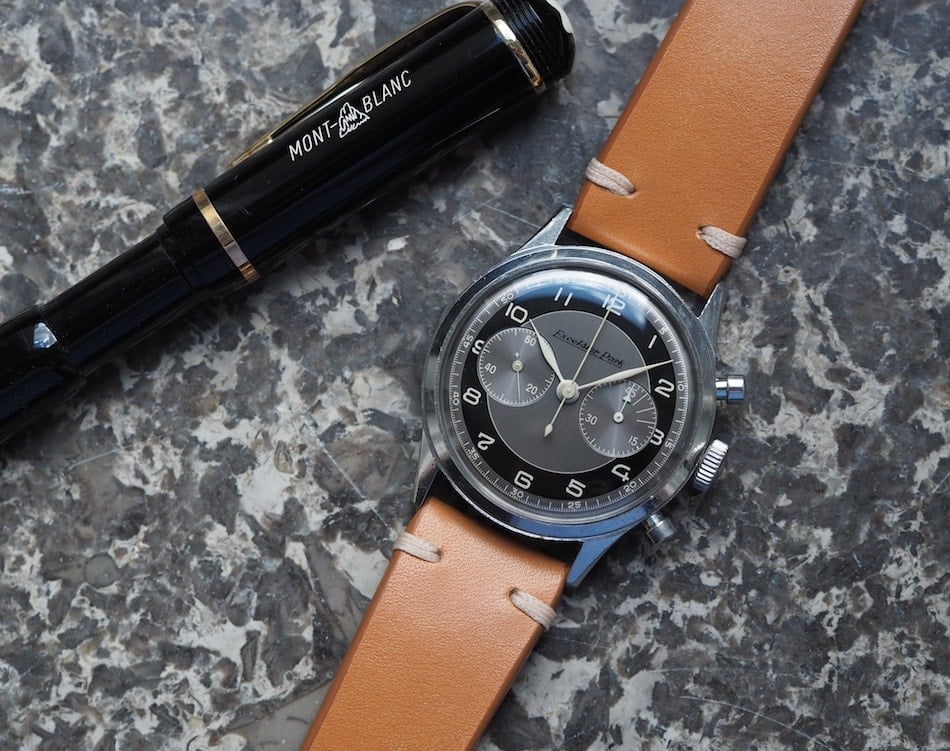 Speaking of wearing, the Excelsior Park Tuxedo Dial Chronograph is a stunner on the wrist. Yes, I own quite a few vintage chronographs with all kinds of dial colors, but this piece is so different. Needless to say, I’m glad Andreas thought of me when he saw it. 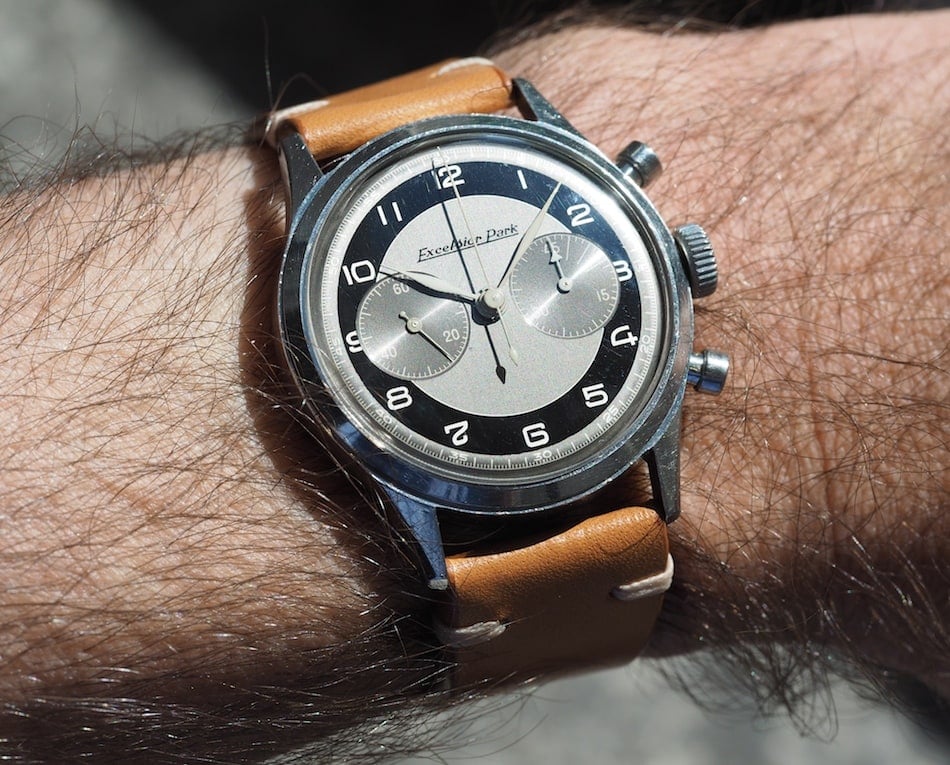 It’s hard to put a value on a watch like this because there I’ve seen so few. I’d guess that $3,000 and above would likely be a good place to start. As always, with pieces like this, tread carefully if hands are missing or if the movement is a basket case. As you can see, I am sadly no longer the daredevil I once was when it comes to taking risks on mechanicals. 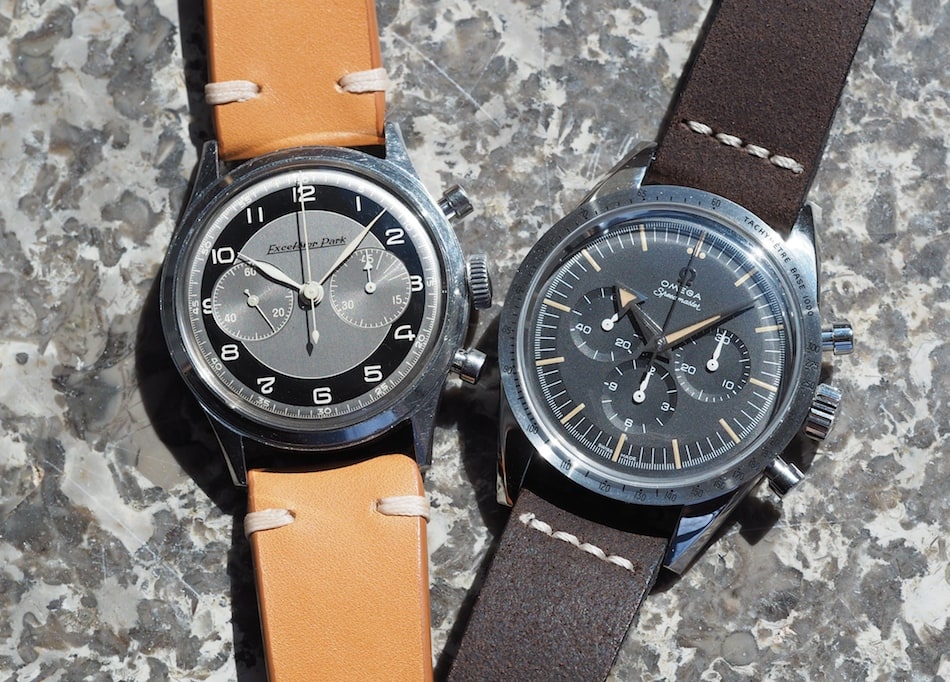 With eye-catching pieces such as the Excelsior Park Tuxedo Dial Chronograph and so many others made for other companies, EP was quite the watchmaking company. For collectors, they offer the rare opportunity to buy a watch that was essentially all made under one roof – something people, rightly or wrongly, go nuts about in today’s marketplace.