Do you feel cool when you spin your 60-year old bi-directional bezel on your diver in both directions? Hold your horses. There is a watch that rotates its plexi crystal in both directions: the Basis Alarm Watch!

Full disclosure. I cheated on my Vulcain Cricket. Actually, on my four Vulcain Crickets. I got a bit tipsy in a bar at Budapest airport while waiting for my plane. Being in a good mood, I got involved in a tiny affair with another alarm wristwatch. It started online soon after we met and since then we see each other occasionally. 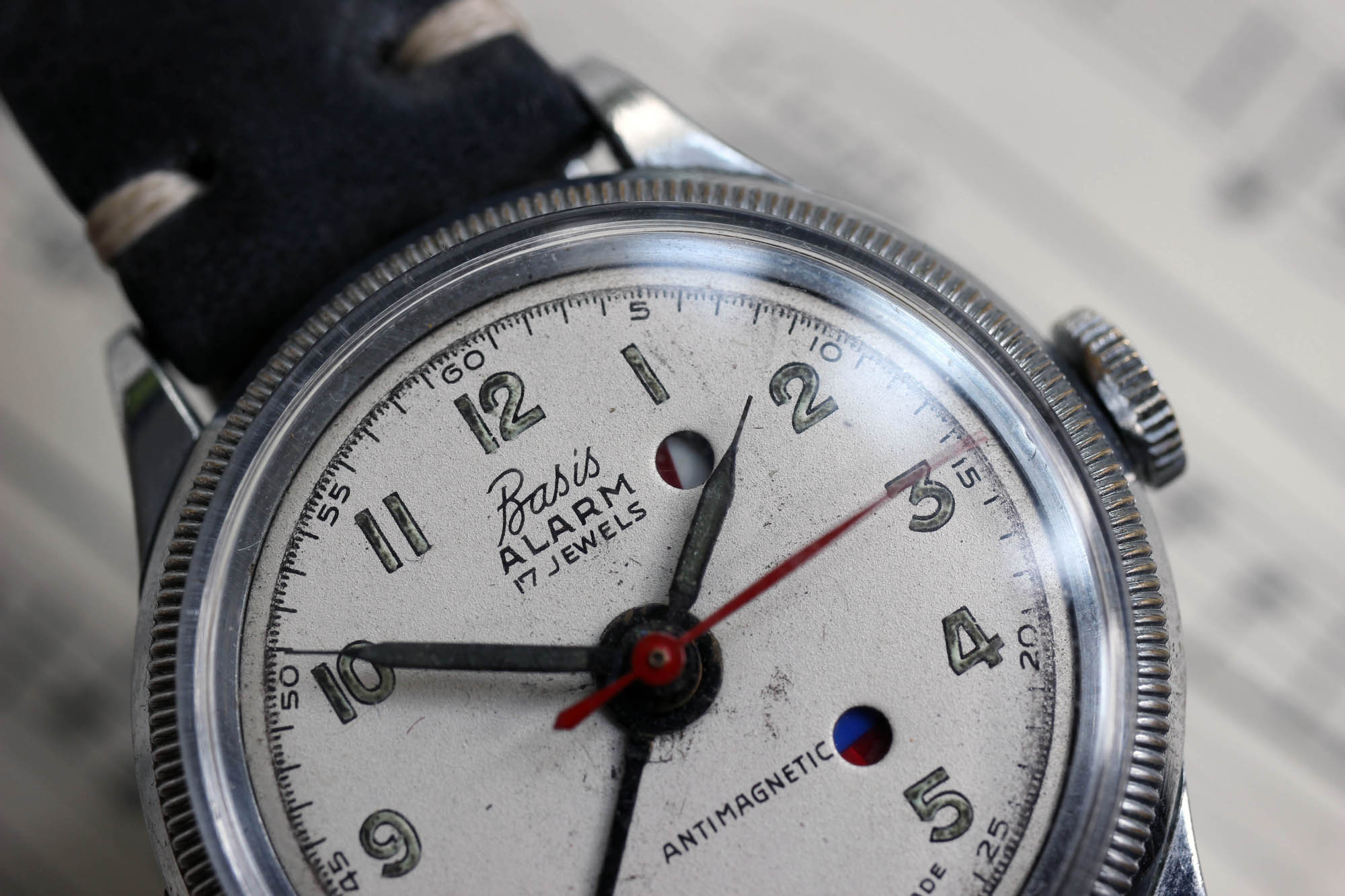 Have you ever heard about Basis watches? Me neither. An exotic name, pretty generic face, but an extraordinary heart. Months before I first laid the Basis Alarm Watch on my wrist, I ran research on alarm watches with this specific Baumgartner caliber so I knew for sure there were more brands using this particular case and dial design. Hence, it has the ‘generic design’ label. Despite that (un)popular label even the critical eye has to admit that the design is actually cool, unique and very balanced. 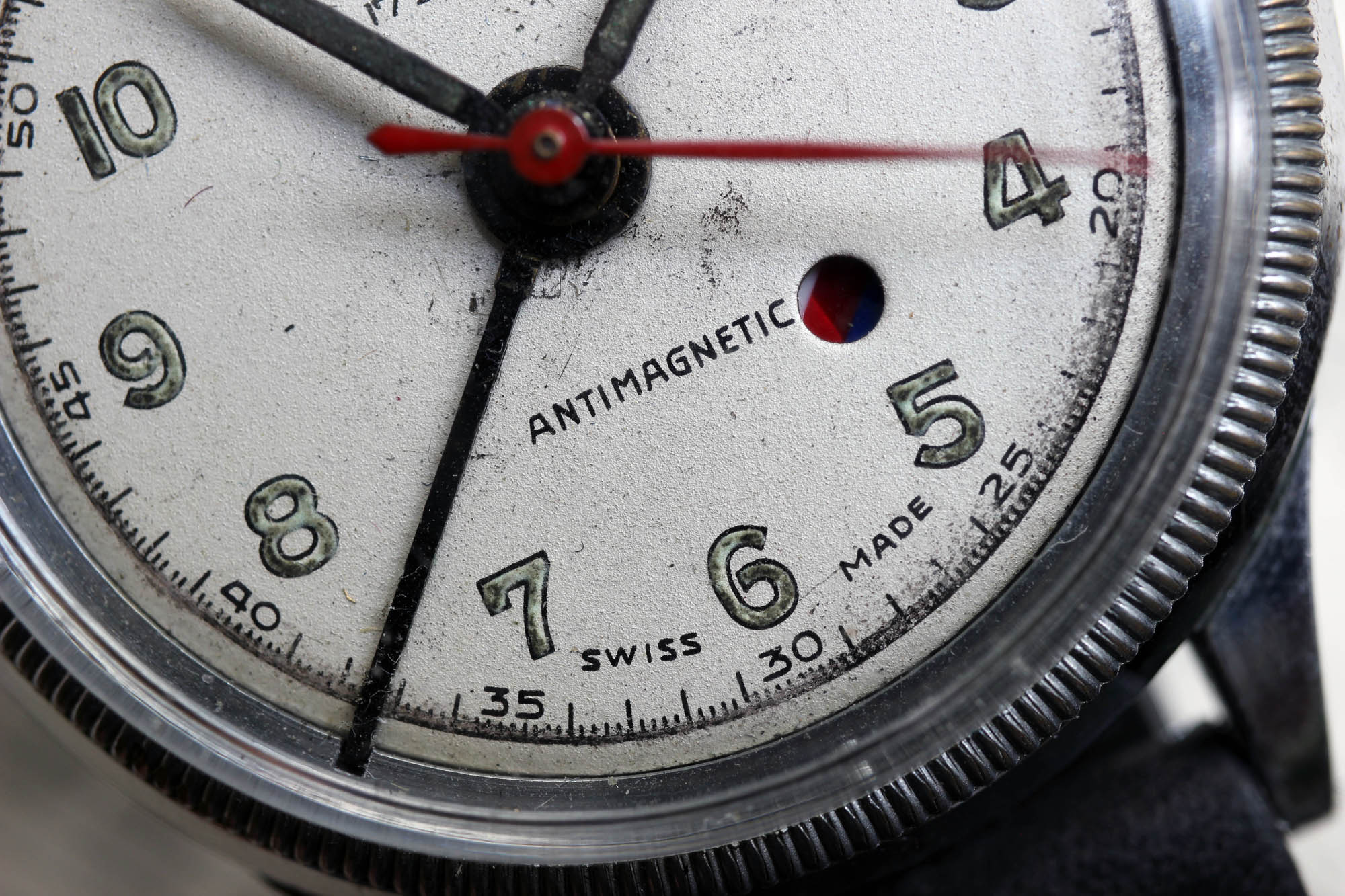 Straight to the point

The first disturbing (or eye opening) element in the dial design of the Basis Alarm Watch is the presence of two apertures in very unusual places – the first one stares at you slightly behind one o’clock, the second one slightly before five o’clock. You would be very disappointed to search for a date, power reserve indicator or moon phase. If you look closer, you can see thin blue, white and red stripes on what is probably a round disc spinning under the dial. It feels like looking at a funky sailor’s T-shirt. 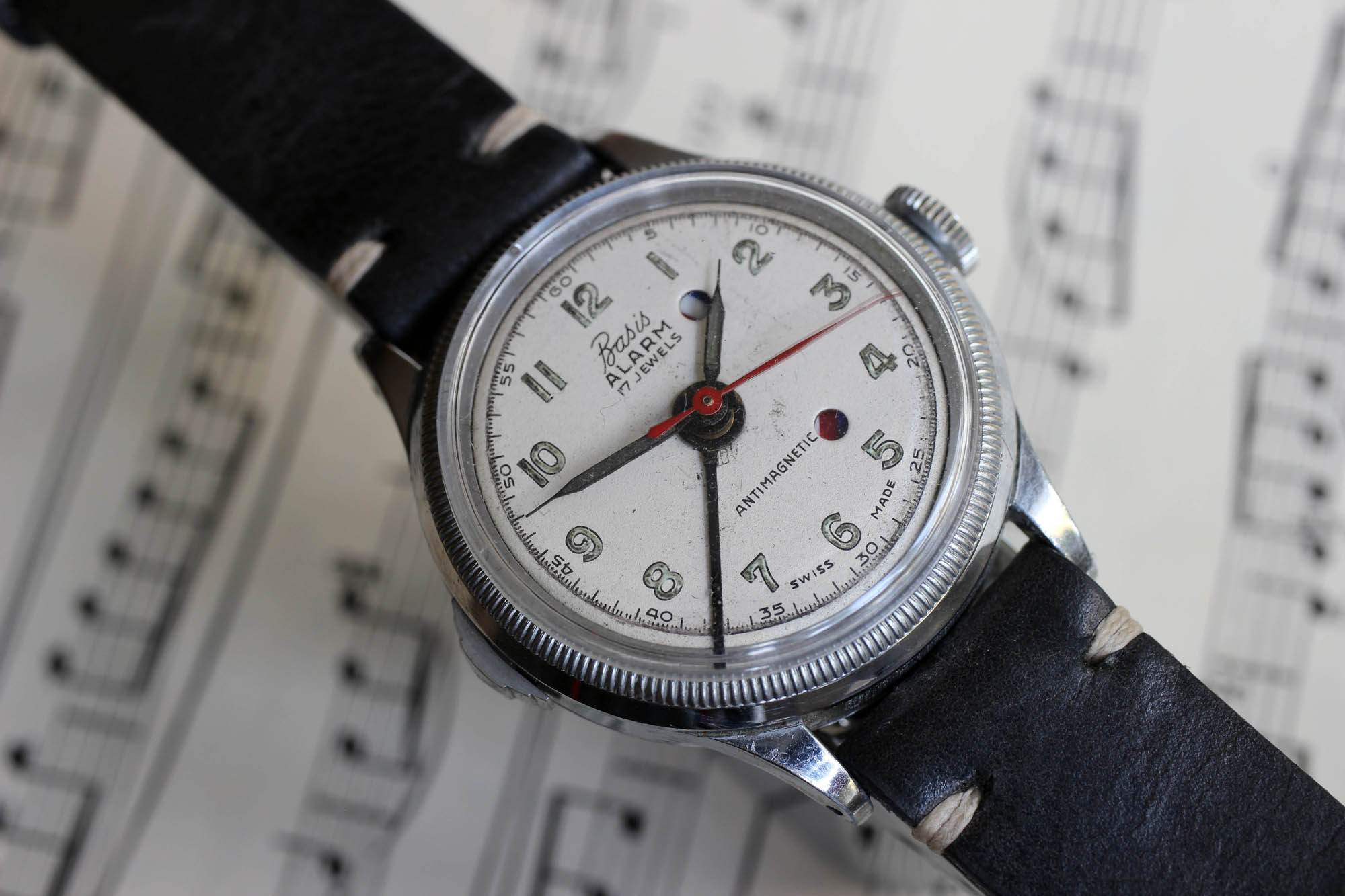 If you read our recent #TBT article on a pair of Vulcain Crickets with the 120 calibers, you already know that the crown winds two independent barrels. When you wind the watch upwards, you are winding the barrel powering the alarm. If you wind it downwards, you are energizing the wheel train. The Basis Alarm Watch and Baumgartner 90, also being referred to as the BFG 90, do the job of empowering both barrels with winding the crown in a single direction. When wound upwards, both barrels are attached to the stem through friction with two windows indicating which barrel is winding. Watch the video below:

When I got my hands on the Basis Alarm Watch for the first time, I immediately started to wind it upwards. Both discs were turning around while winding. When I thought I had wound it fully, both discs stopped moving. By that time they were turning simultaneously. This was quite understandable as I always did it this way. I was winding the watch and both discs stopped moving and this is how I felt that the movement was fully would. The counter pressure was so strong that I immediately felt that my Basis Alarm Watch couldn’t be wound any further. I found the discs nice, but a bit useless. 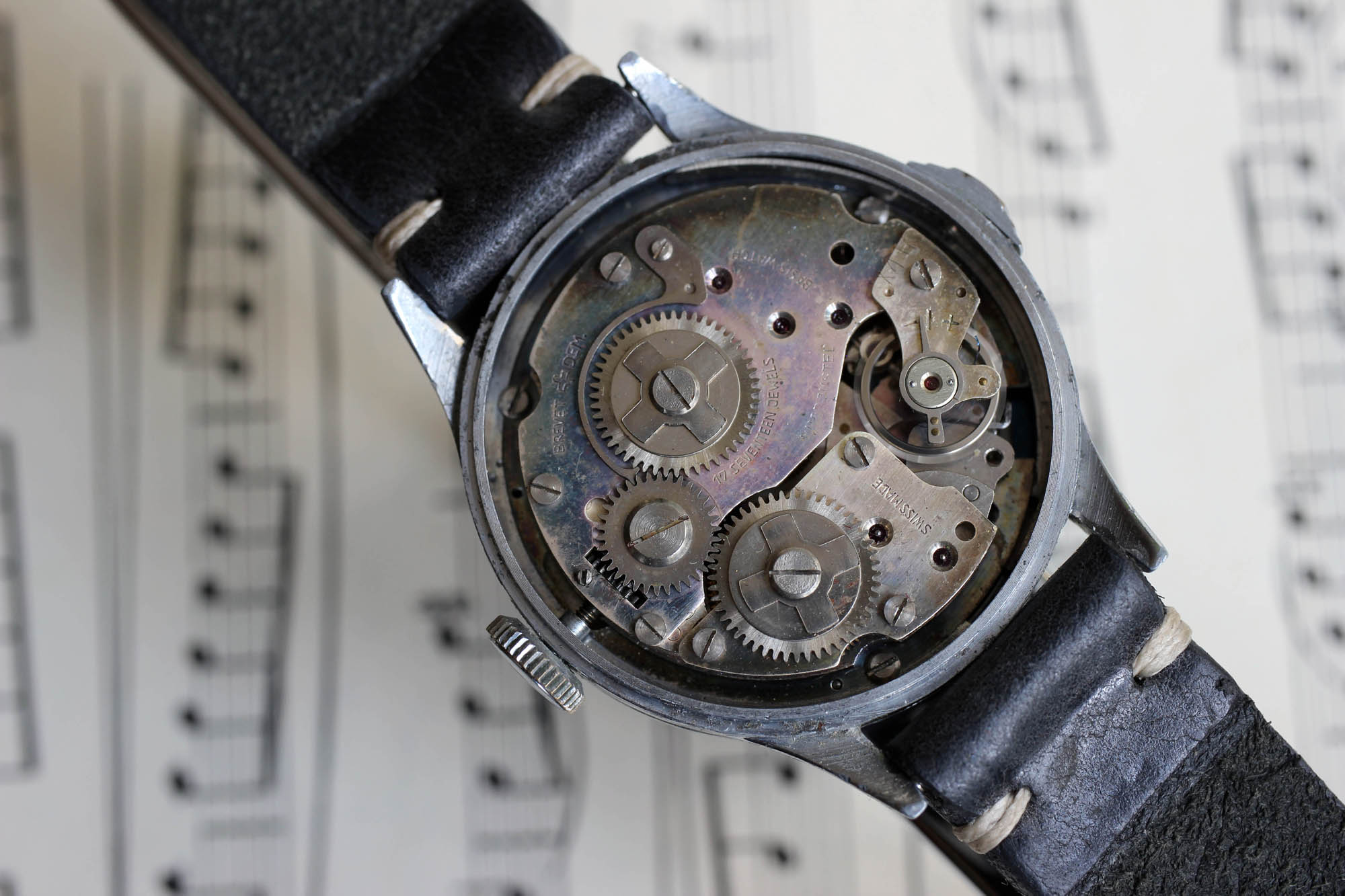 An exotic name, pretty generic face, but the extraordinary heart.

You can imagine how confused I was when I read the following: “The two windows are an indicator that the barrel is wound and you can stop winding.” Obviously, I always stopped winding, simply because I couldn’t wind any further.  Were the instructions somehow an indication that the Basis Alarm Watch should be wound past its stopping point?  Physically, it seemed wrong and potentially damaging.  And what’s more, in my early bouts of wearing the watch, I hadn’t come into a situation where the alarm had run out of power but the watch was still running.  Encouraged by this learning though, I wound the barrels fully and activated the alarm. I did this multiple times, but the discs were always rotating together. 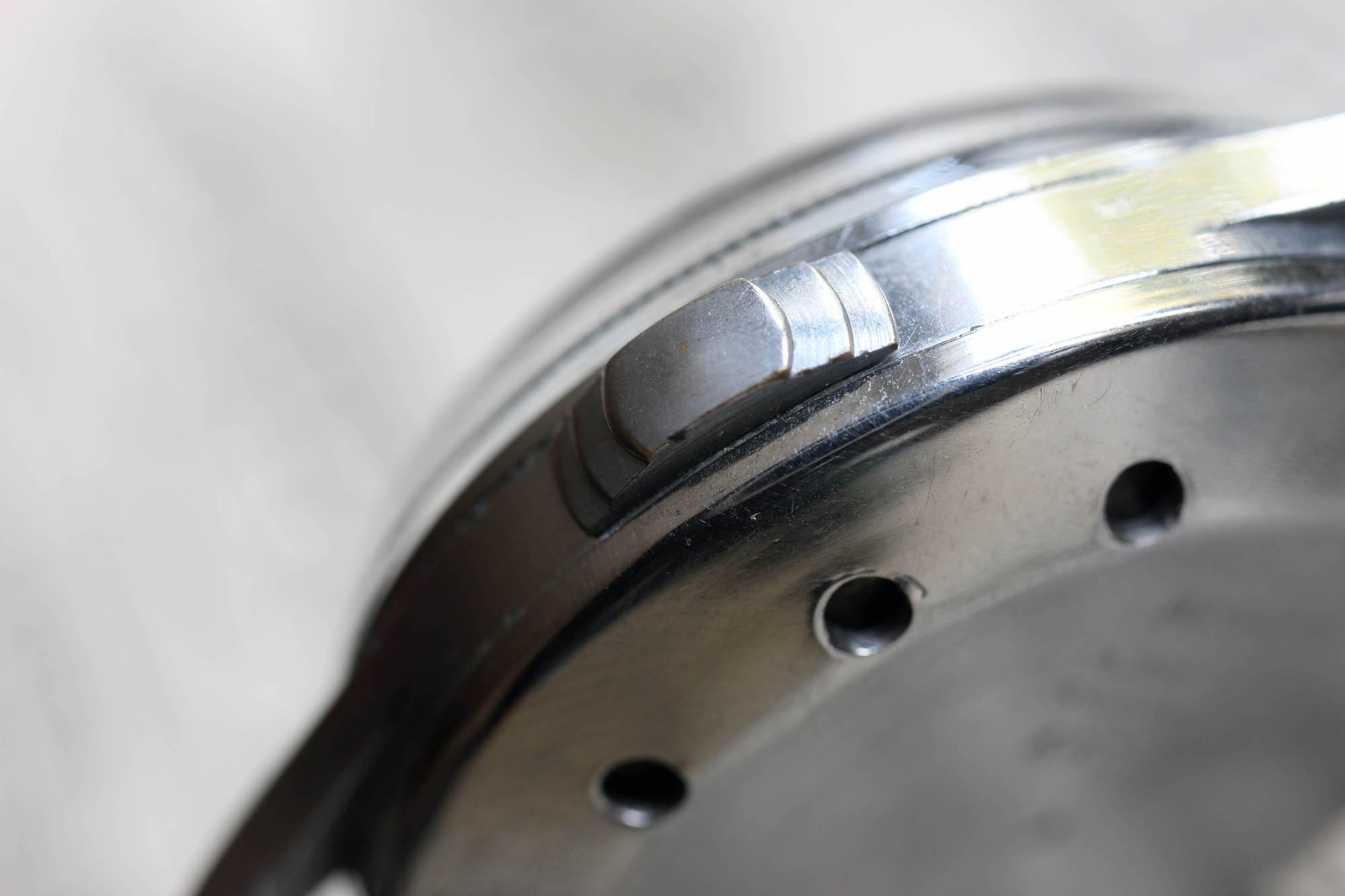 The left profile picture reveals a pyramid like button that operates the alarm function.

Up the learning curve on the BFG 90

It was after the fourth activation of the alarm on the Basis Alarm Watch that I got the watch in a position where I couldn’t wind it anymore, but the alarm barrel was apparently out of juice. So, there was no other option but to proceed: I wound the crown using seemingly unnecessary strength, even though I felt I was hurting the watch. But that was the moment I saw it happening. With increased pressure applied to the crown, I felt I was winding ‘something.’ But not the fully wound movement, as confirmed by the static upper disc. When I saw the disc at 5 starting to rotate, I knew I had reached my destination as I was winding the alarm barrel only. I discovered the pure genius of this watch. 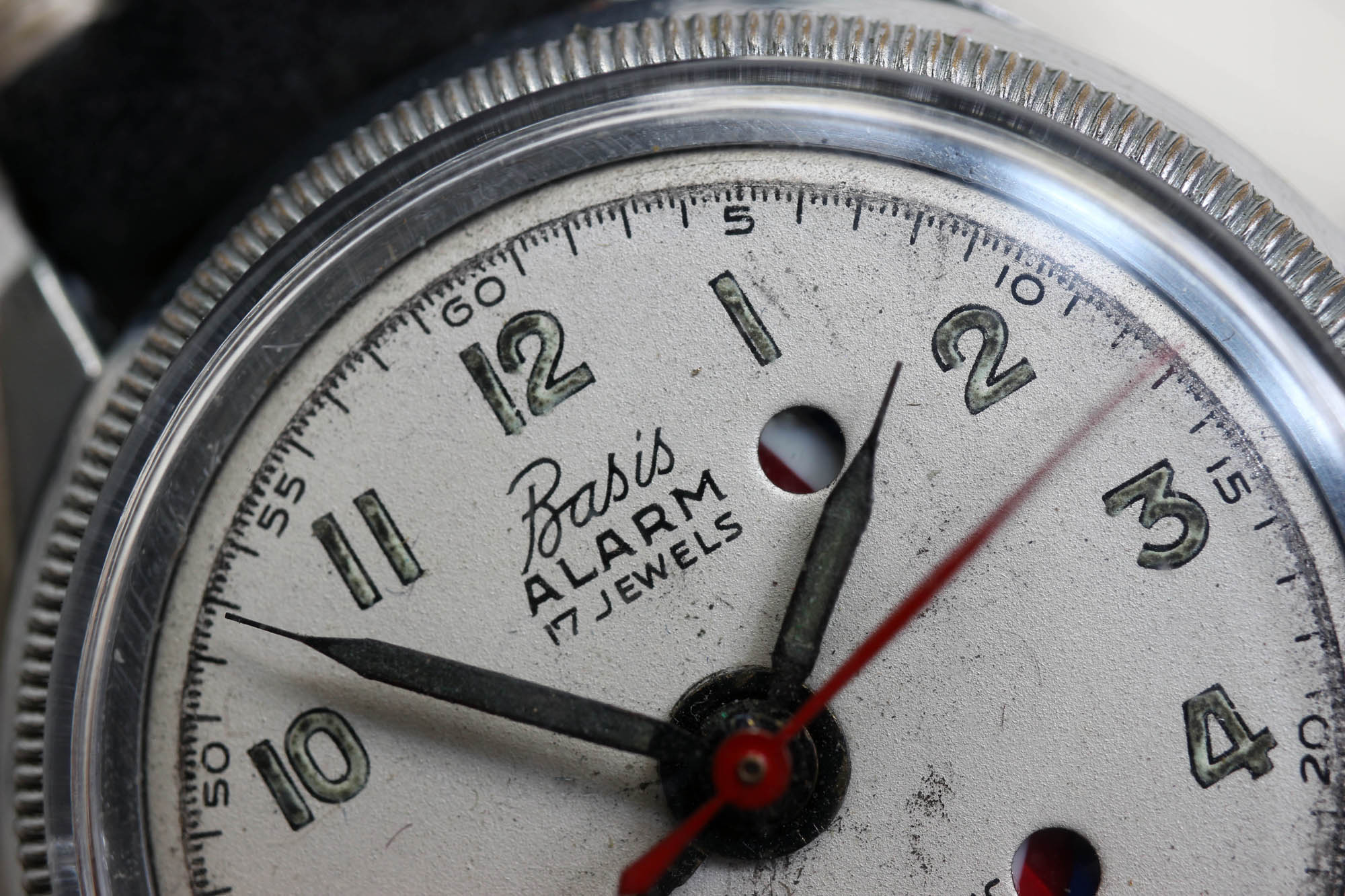 As I said before, there is very little information around on the BFG 90 or the Basis Alarm Watch and it is not easy to piece the story together. You often find bits and pieces that don’t give you the full story about the charm of this movement. Even a seasoned dealer that listed this Basis Alarm Watch probably had no idea how this movement really operates. There was no mention about the discs at all in the eloquent description: just a generic description on alarm movements. 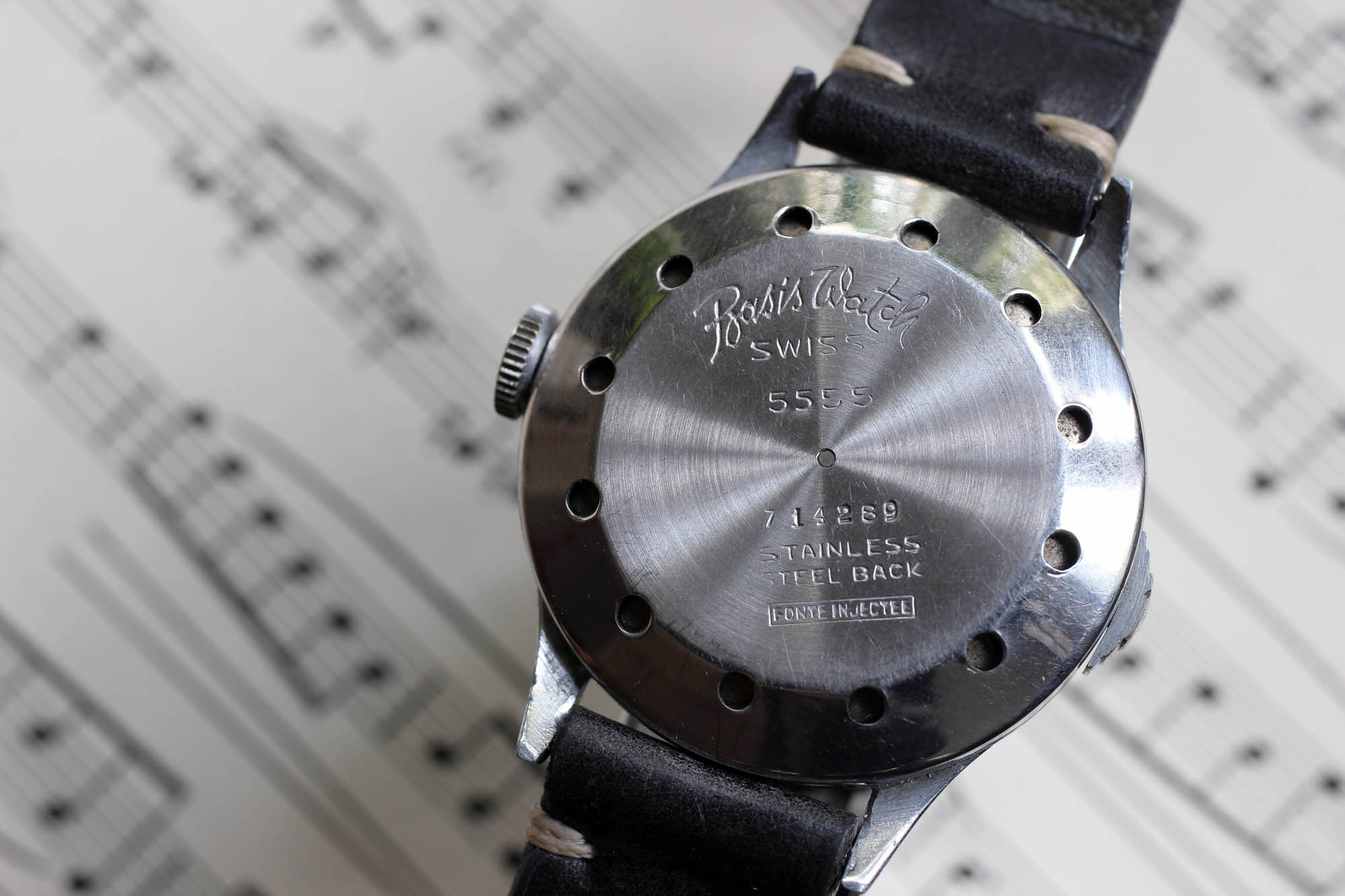 Disassembling the BFG 90? #not

As the watch runs perfectly and looks to be in very good condition I decided not to order an overhaul of the Basis Alarm Watch. The shame is that I haven’t seen it fully disassembled and we need to rely on pictures I found around to understand it from inside. Obviously, the Baumgartner 90 has some sort of a slip clutch that prevents over winding the fully wound movement spring while winding the alarm spring. However, as charming as Vulcain Crickets are, I have to say I am pretty amused and fascinated by this watch’s idea and its execution: even more so if you put this simplicity in context with the rotating discs and the rotating plexi. 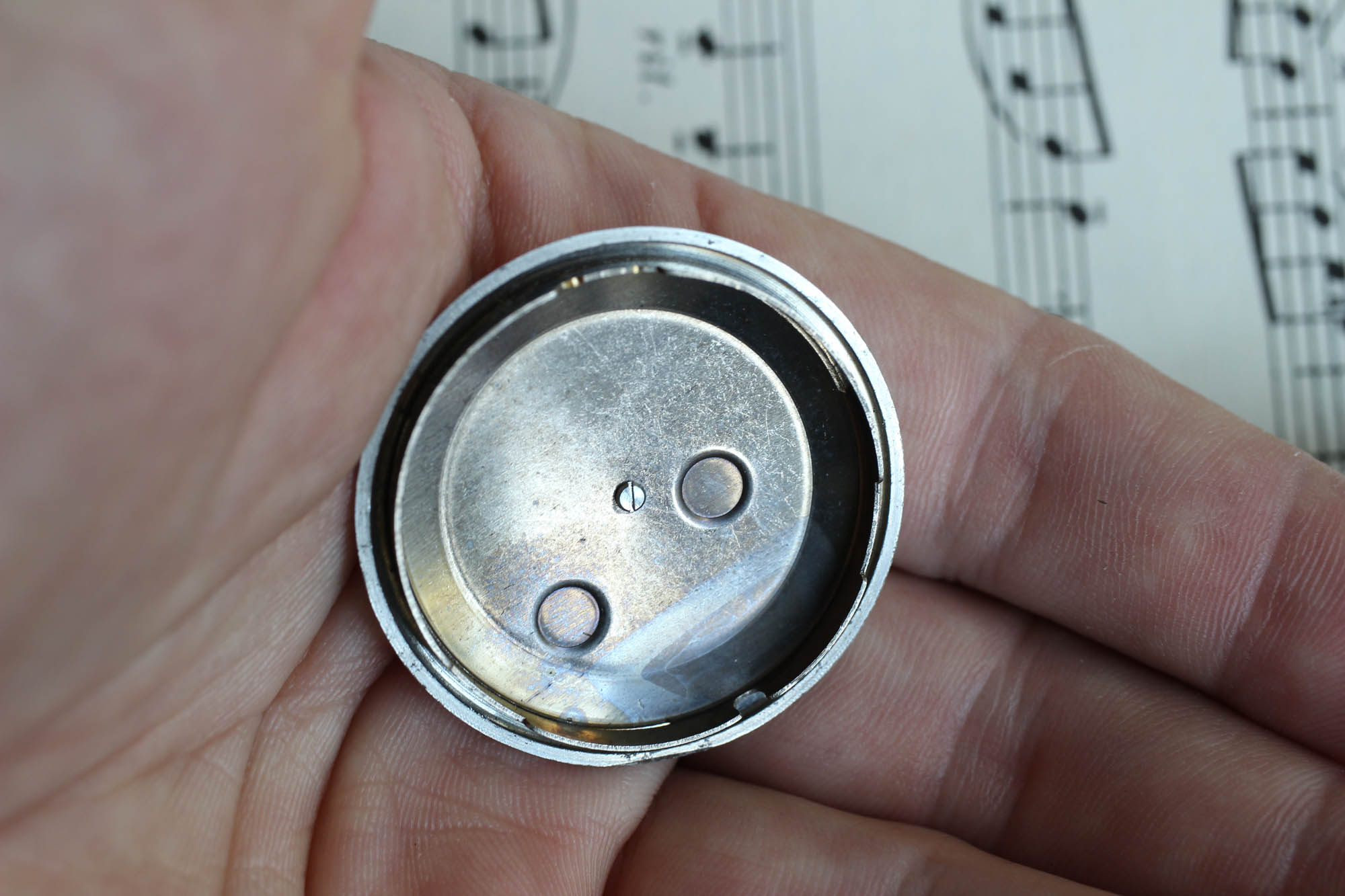 Playing with the alarm

The second positively disturbing element on the dial of the Basis Alarm Watch is the alarm hand – if you allow me to call it a hand. To be more precise, it is not a hand as it goes beyond the minute scale. It even passes the dial and hides under the plexi. In reality, the tip of the alarm hand is fixed to the bottom part of the plexi. Once you turn the plexi around, the alarm hand moves with it. This makes for a completely new experience. One fun-fact: Some alarm watches with the BFG 90 movement have a special detail on the dial. There is a nice arc arrow pointing counterclockwise, probably to instruct how to set the alarm. I believe there is no difference in the way you turn the alarm to set it though. 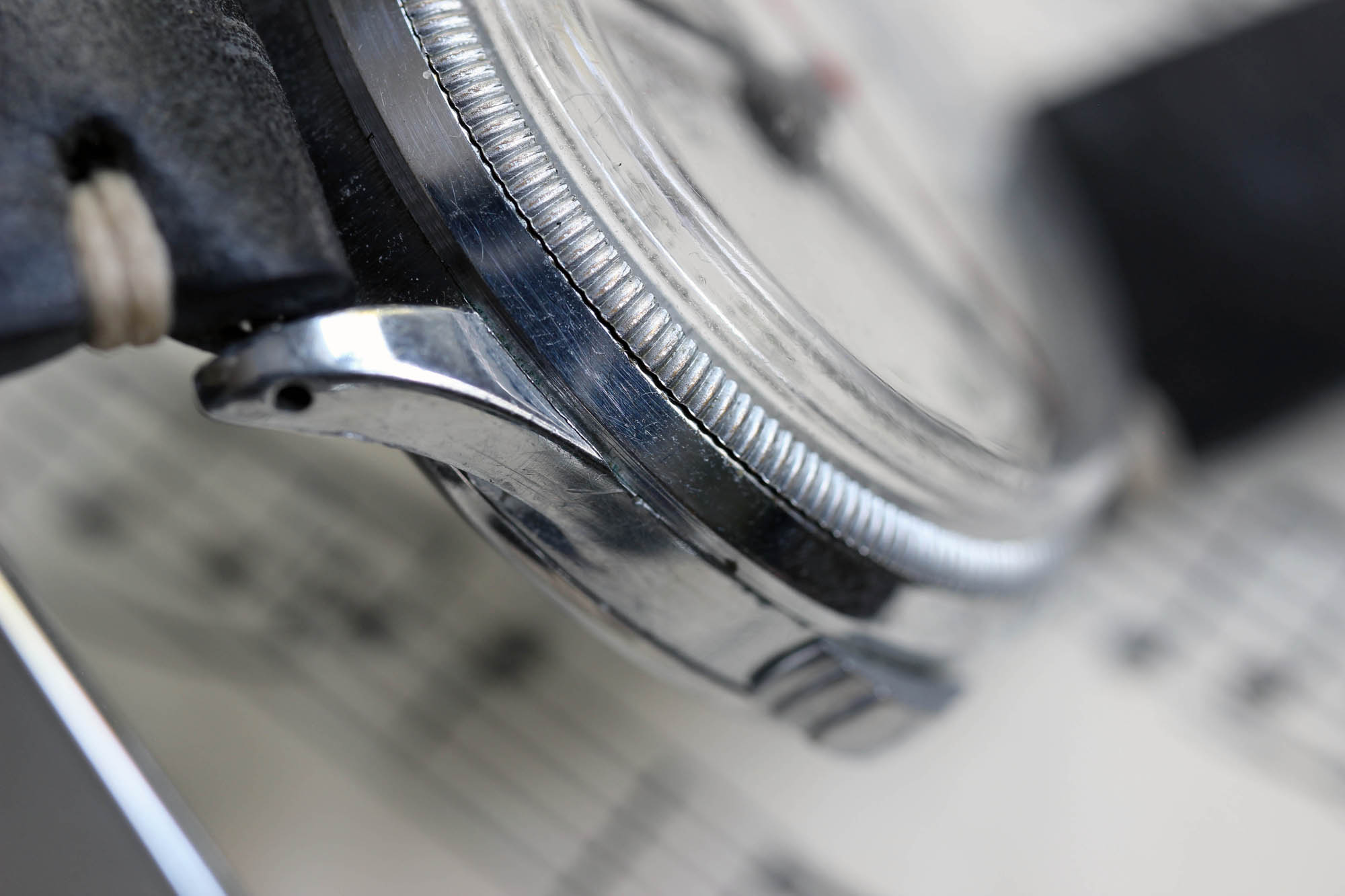 Another definite plus for the Basis Alarm Watch is the case shape that makes the watch look modern even today. Looking from the side, you will not only see lug holes, but also unusually thin lug styling. The left profile picture reveals a pyramid like button that operates the alarm function. If you move it into a lower position, the alarm is activated. When you want to deactivate the buzzing alarm, you can easily move the lever into the upper position. By the way, if you want to silence an alarm in a flash, you can just rotate the whole plexi. Talking about the plexi again, it has a coin edge finish creating the effect of legendary pilot bezels. It’s designed to be easy to grab and spun. 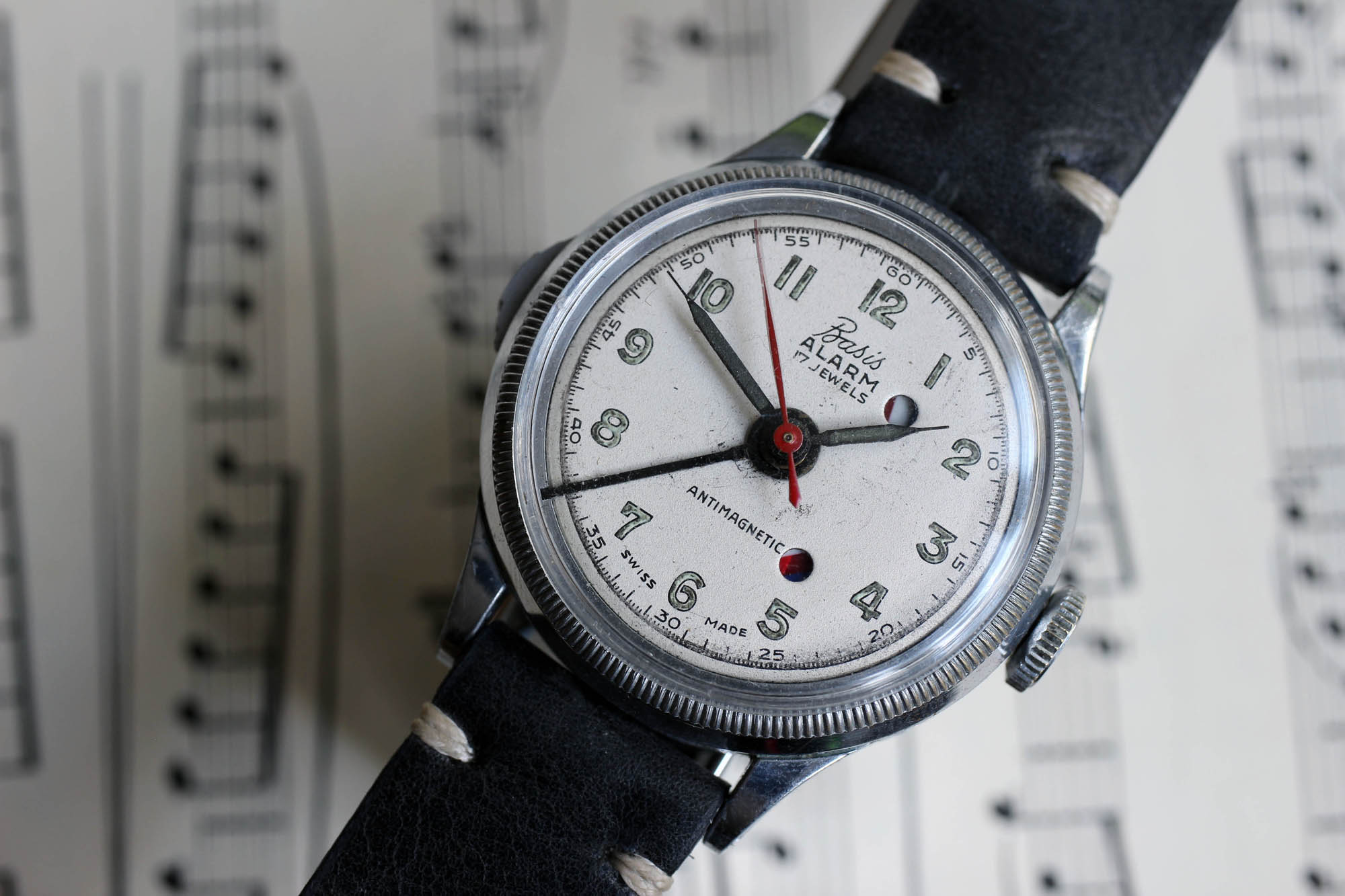 I got a bit tipsy in a bar at Budapest airport while waiting for my plane. Being in a good mood, I got involved in a tiny affair with another alarm wristwatch.

The size and style of the numerals on the Basis Alarm Watch are just perfect. My particular example has lume that’s aged into mysteriously cold grey-ish tones. If you turn the crystal with the alarm hand, you can see it moves the hour hand a bit. That’s why it is recommended to get used to turning the plexi into one direction. Obviously, the watch is not steel; we are in chrome land. You might find the watch with different hand sets, but I believe these syringe styled hands are original to the model. The alarm sound is a bit rougher and duller in comparison to the Cricket, but I like it as it fits the movement quality and construction perfectly. The playful Basis Watch logo is also engraved on a pierced case back.

If you want to get an alarm watch with a Baumgartner 90 movement such as the Basis Alarm Watch… well, fingers crossed. There aren’t many up for grabs, so I encourage you to try big watch fairs or trade shows. It would be difficult to list every single brand with the same case style probably housing the BFG 90 as well, but I am sure you could find one with a Fabry, Tior, Simplon, Arco or Sheffield logo on the dial. And the price? Hard to say, but I guess anything between a few hundred to a grand for one in perfect condition. Time to set the alarm for your next hunt.