Last year, Cartier surprised us with a most unexpected launch of three colorful Tank Must watches. I must admit, I found these pieces so amazing and charming that the series had already sold out before I could even make a choice. It was quite noteworthy that Cartier announced that the pre-launch of the Tank Must would take place in Europe, while the global release would happen a few months later.

This announcement caused some excitement indeed. Soon, there was a shortage at the boutiques here in Europe, and soon after, it appeared that all the stock had sold out. Collectors weren’t sure how to view this release. With Europe running out of stock, would the rest of the world even get any? It got so crazy that some hardcore Cartier fanatics, mainly from the US and the Middle East, took planes to Europe in order to buy one or sometimes even all three watches. 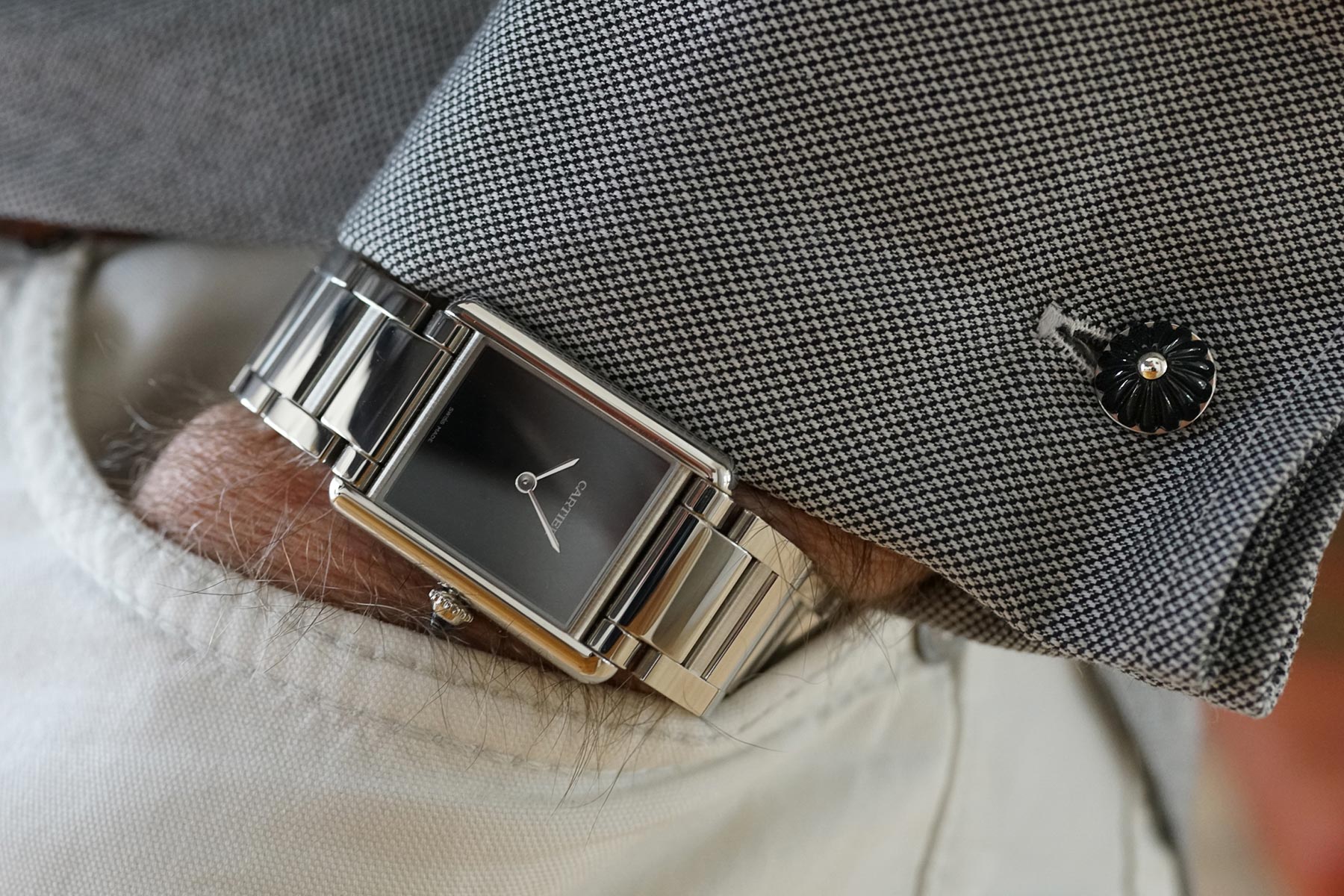 In amazement, I sat with my cup of coffee, looking on my laptop at the first colorful Tanks that appeared on Chrono24 for more than double their retail price. In particular, the version with the green dial turned out to be incredibly popular. How the hell was this possible? These watches traded for much higher prices while the rest of the world waited for them to become available locally.

The international launch went ahead, of course, because La Maison had announced that officially from the beginning. Just like in Europe, there was again a run on the colorful Tank Must models, especially in the US and Asia. 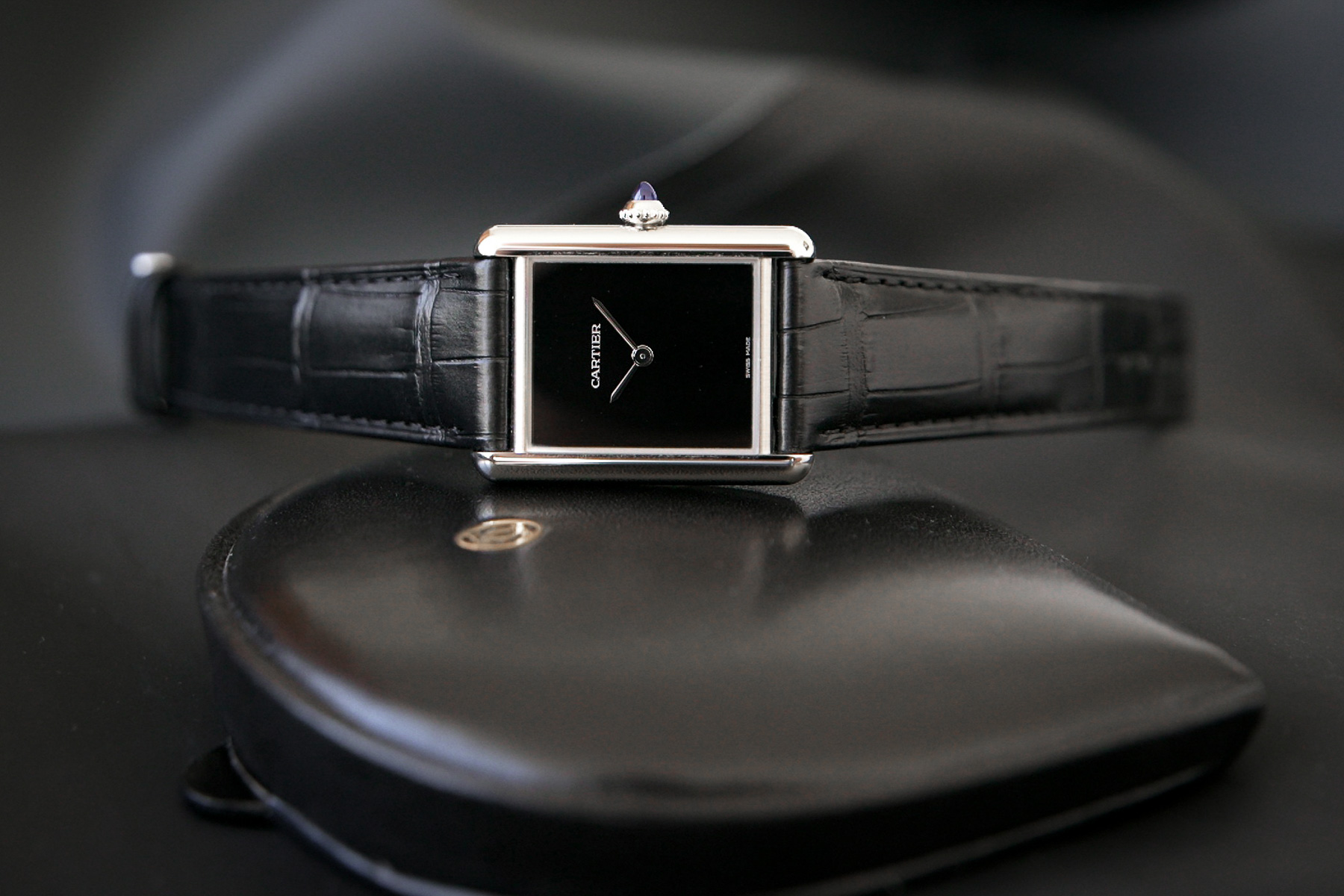 Many people even thought that the Tank Must series was a limited edition, when in reality, it was not. Cartier released the watches as a one-shot production. This means that when the number of watches made had sold out, Cartier would not produce the series again. In case you’re wondering, nobody knows how many Cartier produced. The brand has not communicated the production numbers of these three Tank Must models. 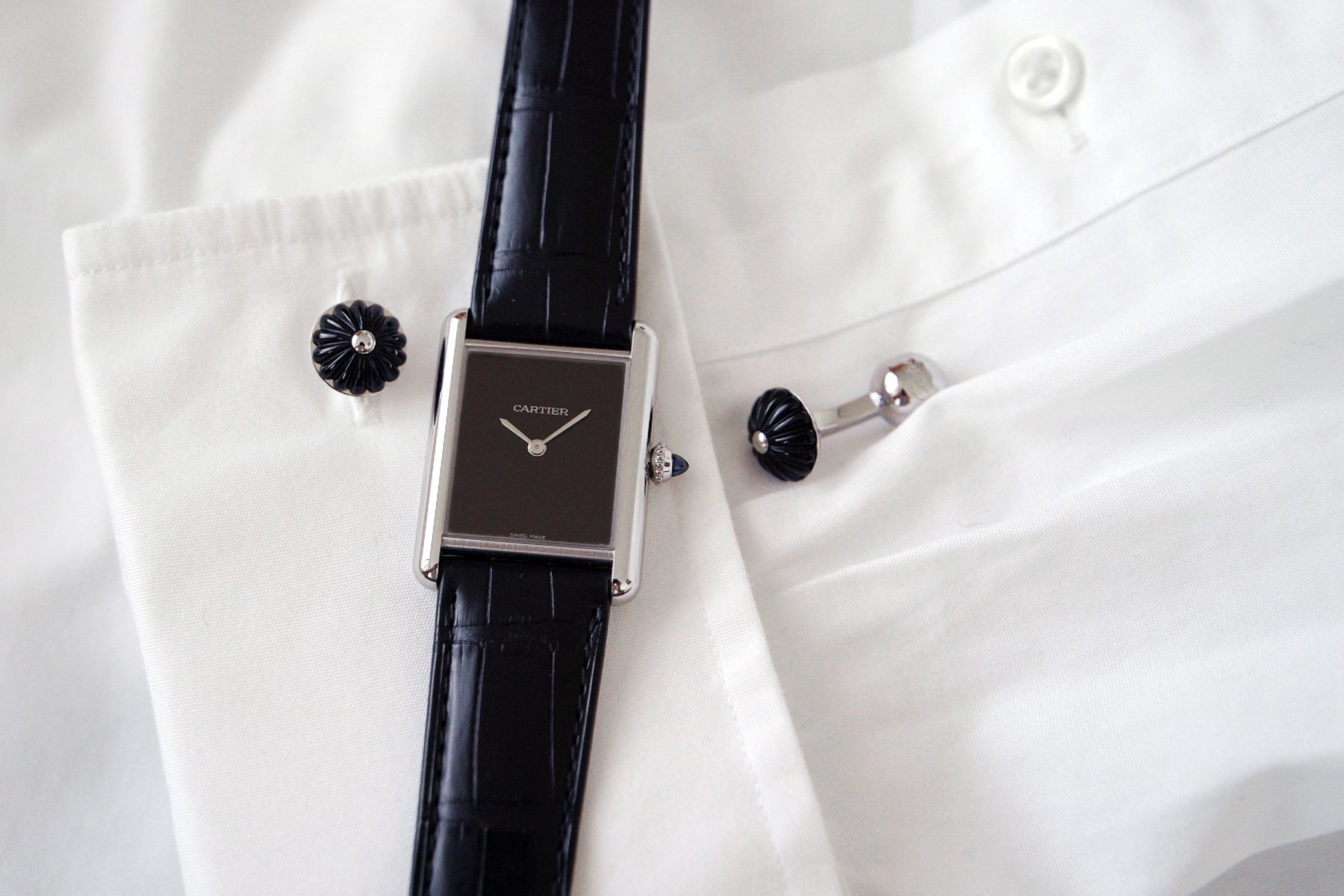 Were you not lucky enough to get one for the regular price because you couldn’t decide which color you liked best? Were you unsure whether red or green would match your outfit, or even whether those colored dials actually matched at all?

The new 2022 Tank Must with a plain black dial that will be released worldwide this September could solve your problem. When I got my hands on this black model at Watches And Wonders in Geneva, I was immediately sold. This is a feeling I didn’t get as quickly with the previous models with the colored dials. This black dial is so serene, stealthy, and easy to wear that I especially think it’s a great Tank for a man. Perhaps the man who, in addition to his larger sports watches, would like a more classy watch to wear to the office and for a night out.

In its steel 33.7 × 25.5mm case, the Cartier Tank Must is absolutely timeless. Powered by a quartz movement, which requires virtually no maintenance and only needs a new battery once every eight years, it is also a carefree watch to have. Even better, it’s perfect as an only watch because it can really be worn all the time. And in case you’re thinking, “That black dial is really stunning, but it would still be cooler with a mechanical caliber,” well, that’s another option. Cartier calls that watch the Tank Louis Cartier. 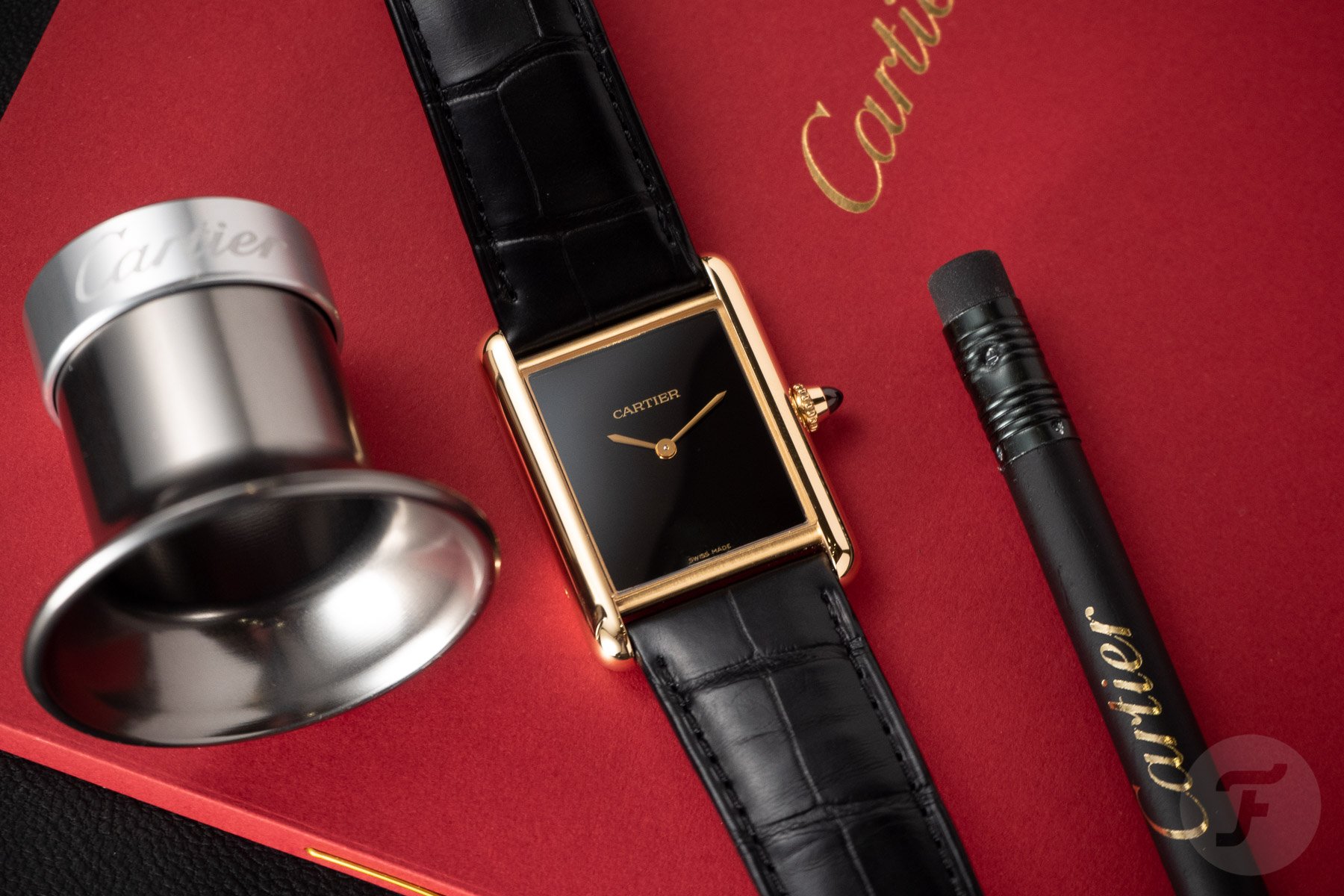 It has the mechanical 1917 MC caliber, the same black dial, and a yellow gold case and hands. The same dimensions and stealthy looks as the Tank Must in steel, but now in gold, fully mechanical, and more luxurious. But let’s go back to the steel Tank Must in black because for many of us, this will be an ideal timepiece with its various possibilities.

Like the previous three Must Tanks, the black version comes with QuickSwitch capability, so changing leather straps is a matter of barely a minute. Black is an ideal and easy color to combine with almost any leather strap. The supplied black alligator strap with a pin buckle makes the watch very business-looking and chic. However, I also tried a dark green alligator strap, and that is a nice combination too. And imagine a tan or even a red strap… Almost any color combination seems possible. And if you would like to go really classic, this black version is — in contrast to the three previous colored ones — also available in the Medium size. That case can be compared to the classic Tank LC and the vintage Must de Cartier Tank. 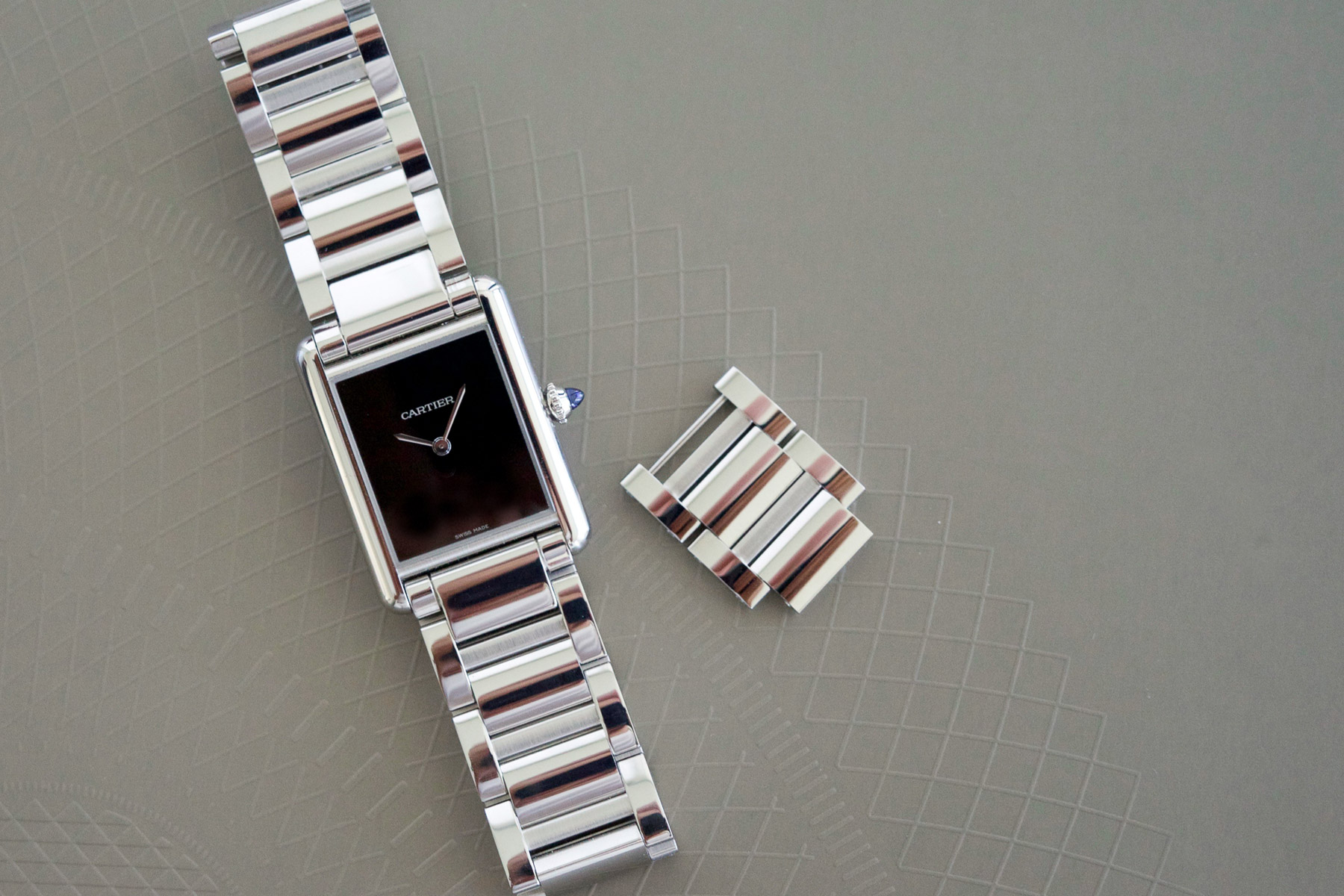 And there’s another really neat option. Cartier had re-designed and re-released the steel Tank bracelet for the Must Tanks of 2021. And that bracelet may look the same as the earlier Tank Solo bracelet, but it feels very different and it is much more comfortable. Changing the leather strap for the steel bracelet is a matter of two minutes. Removing or adding a link is the only part that is marginally more difficult. It requires a small screwdriver, but it’s something that you can certainly do yourself if you are a little handy. In my opinion, the optional steel bracelet on the black Tank Must looks amazing, and the combination is a dream to wear. 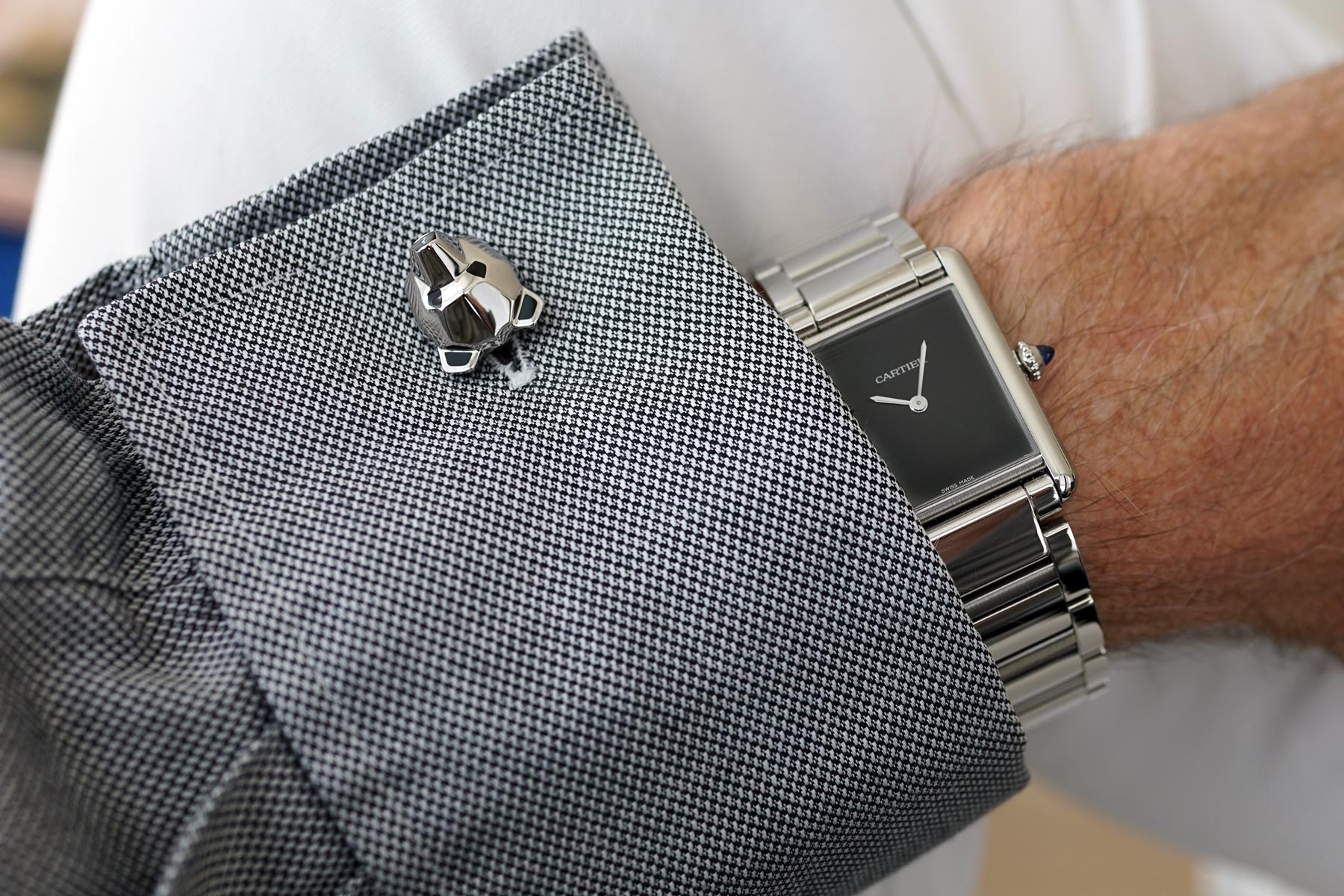 It is very smooth and there are no disturbing push-buttons to open or close the clasp. But no matter how good the bracelet is and looks, admittedly, the design with the large links looks a bit chunky for an elegant Tank like this. Contemporary men could feel more comfortable with the larger links. Still, it should not be compared to a vintage Grain de Riz or Teardrop bracelet. For the gold version of the black-dialed Tank, which I mentioned earlier, there is a different and very nice vintage-looking bracelet available. 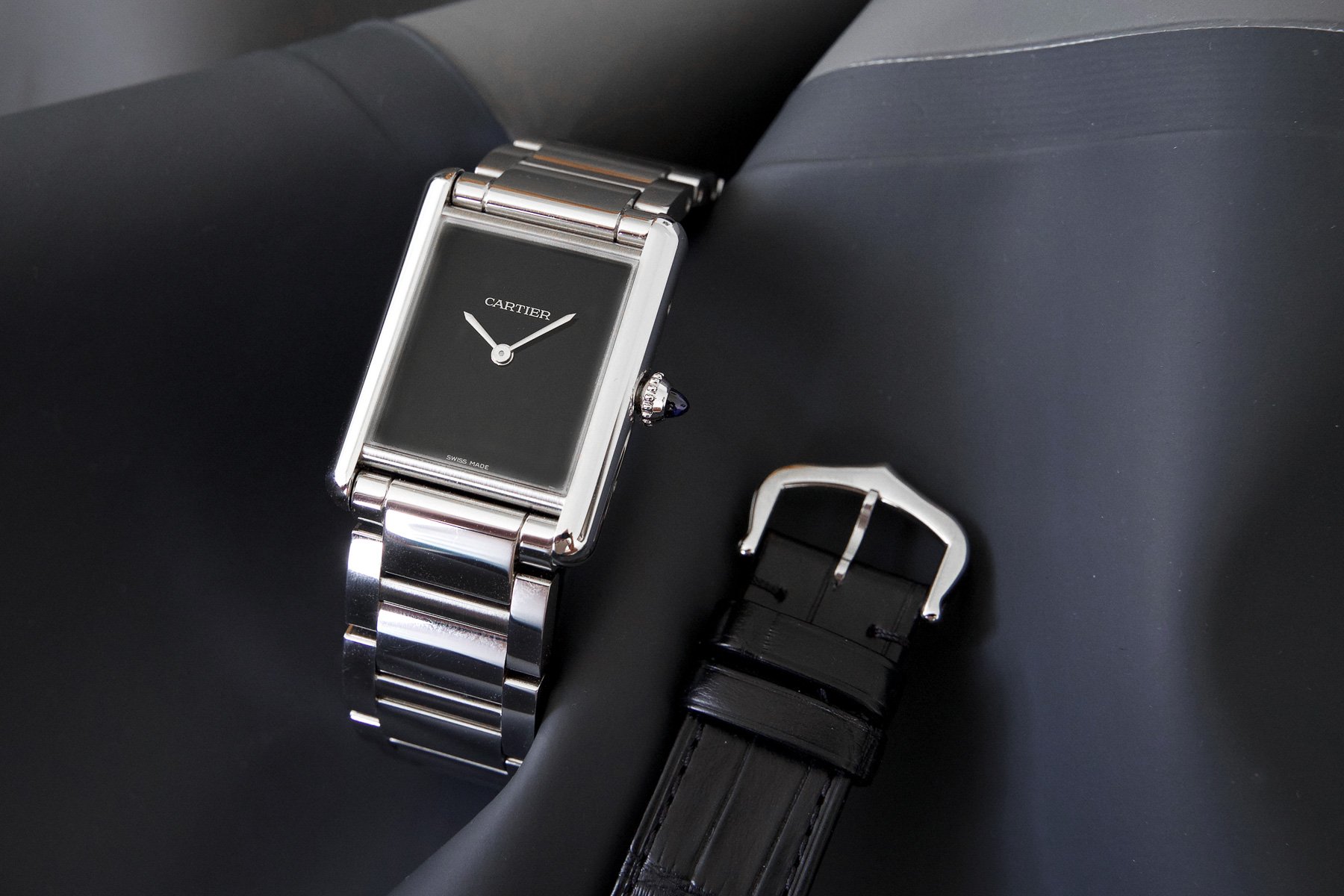 Final thoughts on the Cartier Tank Must in black

Now, I hear you say, “Wasn’t this black Tank Must previously available as a small limited edition of 50 pieces?” Well, yes, unfortunately, that is true. Last year, the watch was available as a limited edition for Switzerland only, coinciding with the re-opening of the Geneva boutique. The model had an onyx in the crown and an engraving of the boutique on the back. It would have been nice if that Tank had been created with a dark blue dial, for example, just to make it different from this important global launch.

I hope that I didn’t give you the idea that the watch I’ve been raving about looks inferior to the Geneva limited edition. That is most certainly not the case. I am sure you can live without that engraving of the boutique on the back (though the onyx in the crown was a cool feature, for sure). All other details and dimensions of both models are equal.

The black Tank Must will be available in two sizes on an alligator strap. It will see a global release in September 2022 as part of the regular Cartier lineup. For more information about the current Tank Must models, visit the Cartier website. And finally, let us know which you prefer — last year’s colored dials or this classic black beauty!

Hot Topics
Are You Still After An Omega × Swatch MoonSwatch?
118 comments
Introducing: The Oris Divers Sixty-Five Fratello Limited Edition
111 comments
Introducing: The New Seamaster Professional 300M 60 Years Of Bond — With A Special Animated Case Back
110 comments
Rolex Is Going Certified Pre-Owned
71 comments
Why Do We Cling To The Evergreens From Brands Like Rolex, Omega, JLC, And Cartier?
47 comments
Popular
Top 10 Rolex Watches – Overview of Models Favoured By Our Readers
Fratello
24
(From The Archives) Shut Up & Read The Truth About Cartier Watches
George Cramer
21
Why You Can’t Go Wrong With The Rolex Datejust
Robert-Jan Broer
5