It is easy to become posh when collecting watches. But I challenge you, when was it the last time you left the house with a quartz watch on your wrist? 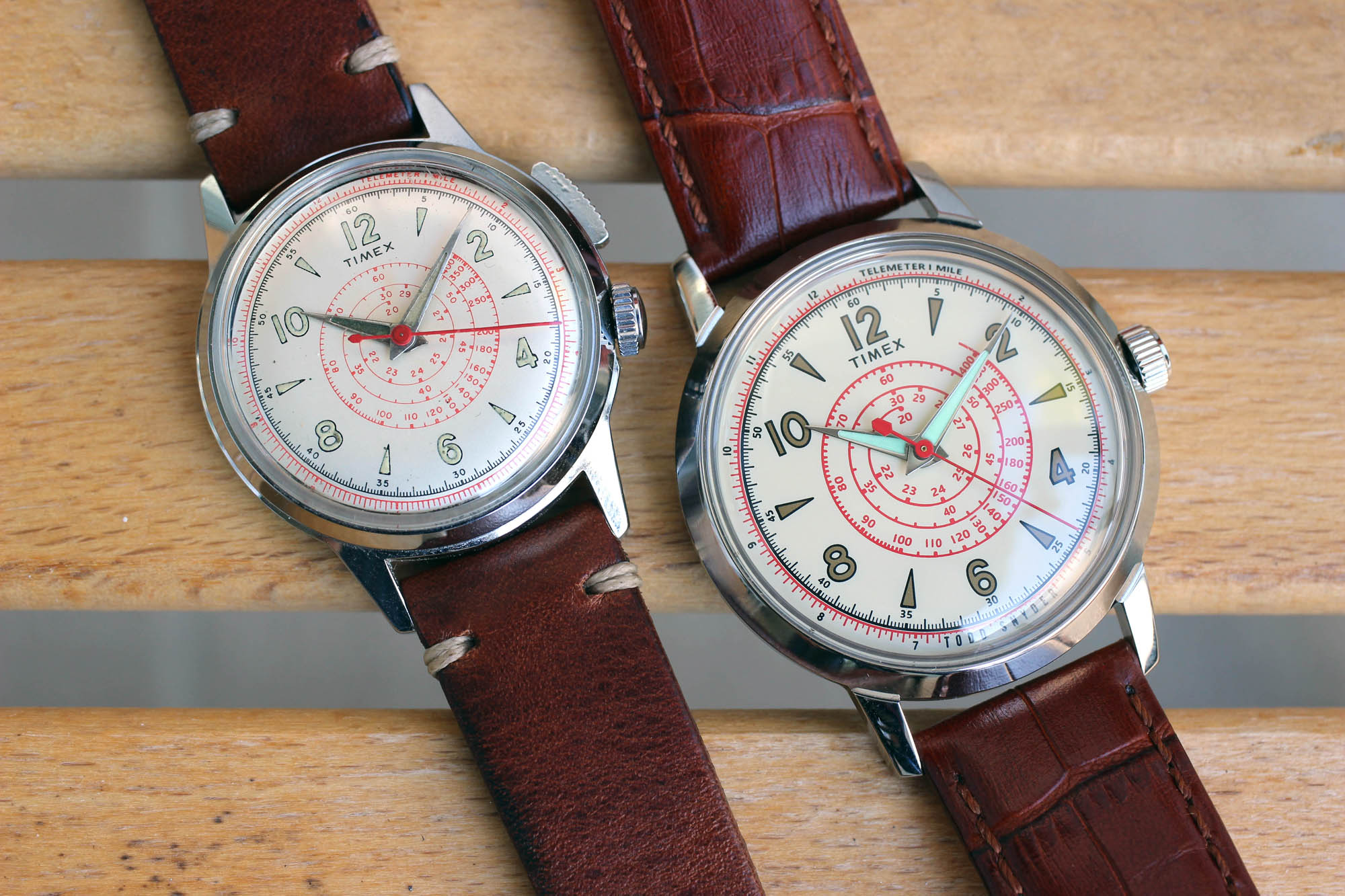 Why shall Timex Beekman be in one’s collection?

A collector once said: “A true collector shall have all the variety of watches in his collection and should be able to rotate a stellar 10K timepiece with a 100 bucks quartz piece.” Would you like to know the name of the collector so you can go and punch him? Don’t google. Just read the name under the headline of this article. 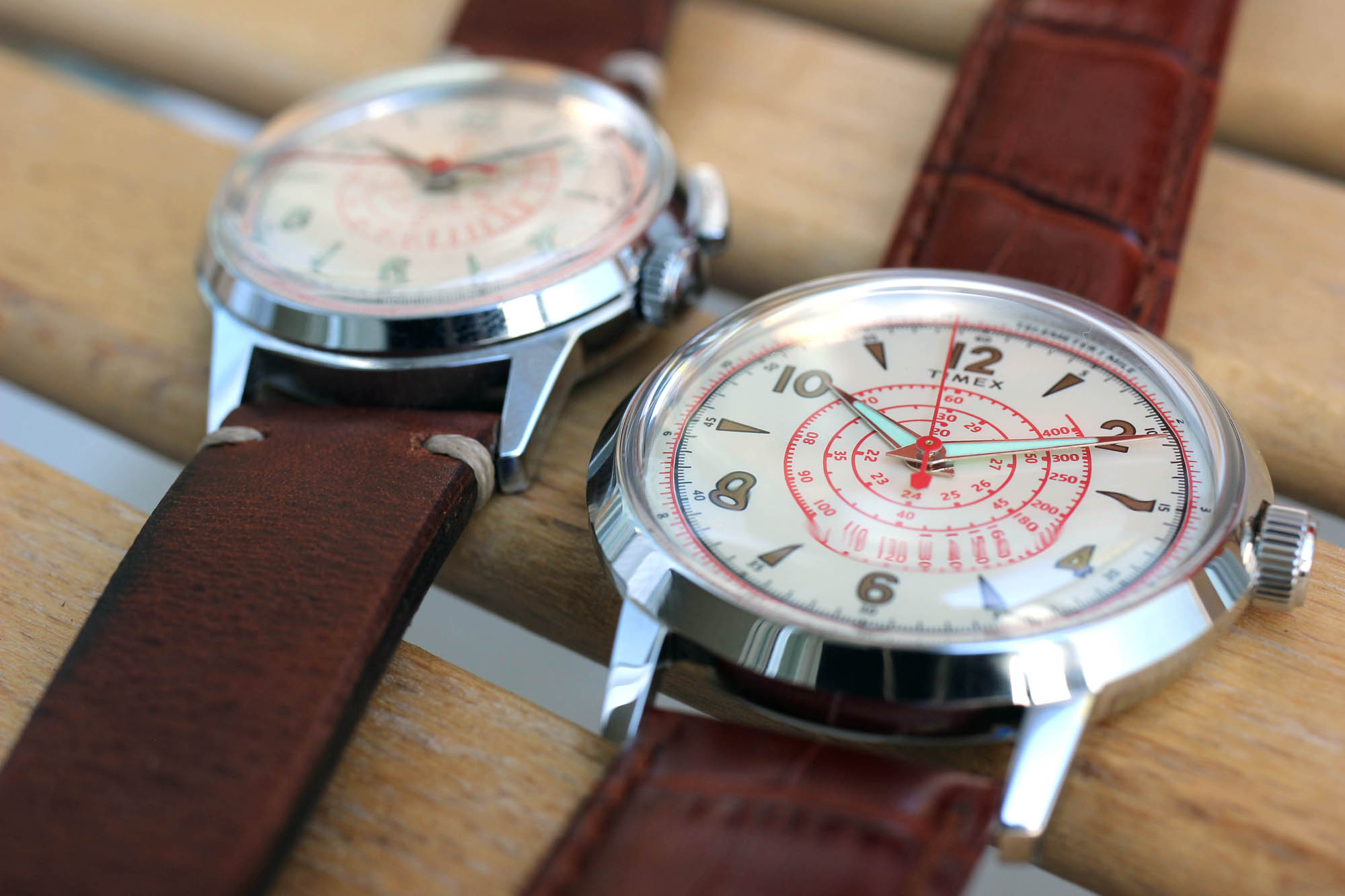 Put on quartz and be cool

I admit I don’t have many quartz watches, but the few I have, I put on from time to time. And I don’t mean only when throwing out the trash in the midnight or cleaning my car. It is a sanity check that I feel confident enough to walk into a room full of well-paid managers with a simple watch on my wrist. In the end, it was a quartz watch that started my passion for watches when I was ten years old. So despite the quartz movement, this Timex x Todd Snyder Beekman has charm, a story to tell and looks damn good! Without further ado. 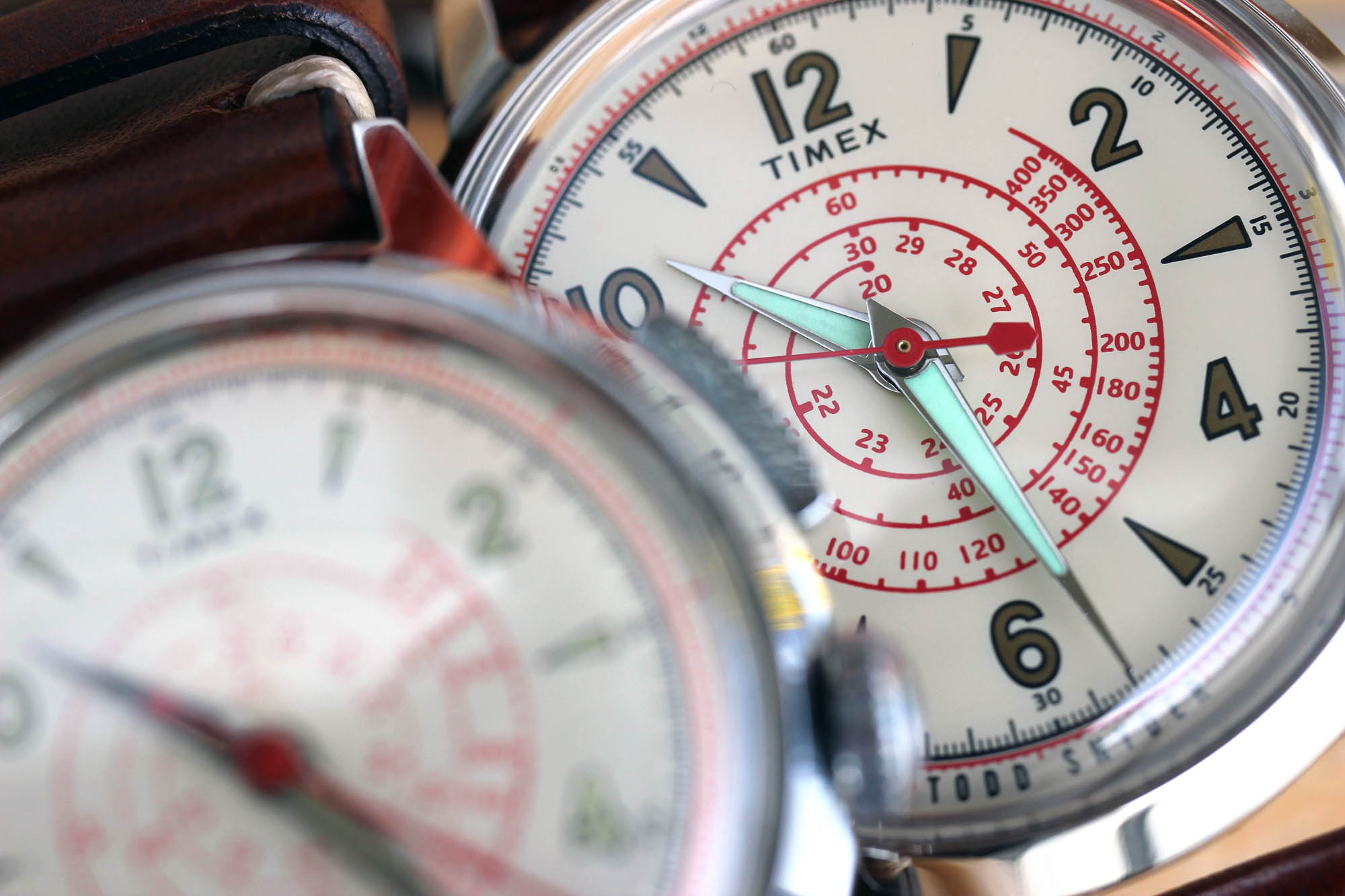 Snyder has been named one of GQ’s Best New Menswear Designers. In cooperation with Timex, he released few successful watches already. This probably secured him a free pass to Timex’s extensive archive in Middlebury where he could sneak around for long enough, to discover the Timex Southampton we reviewed two weeks ago. “The Beekman brings together two things I love: classic cars and classic timepieces,” as was heard from the designer himself. 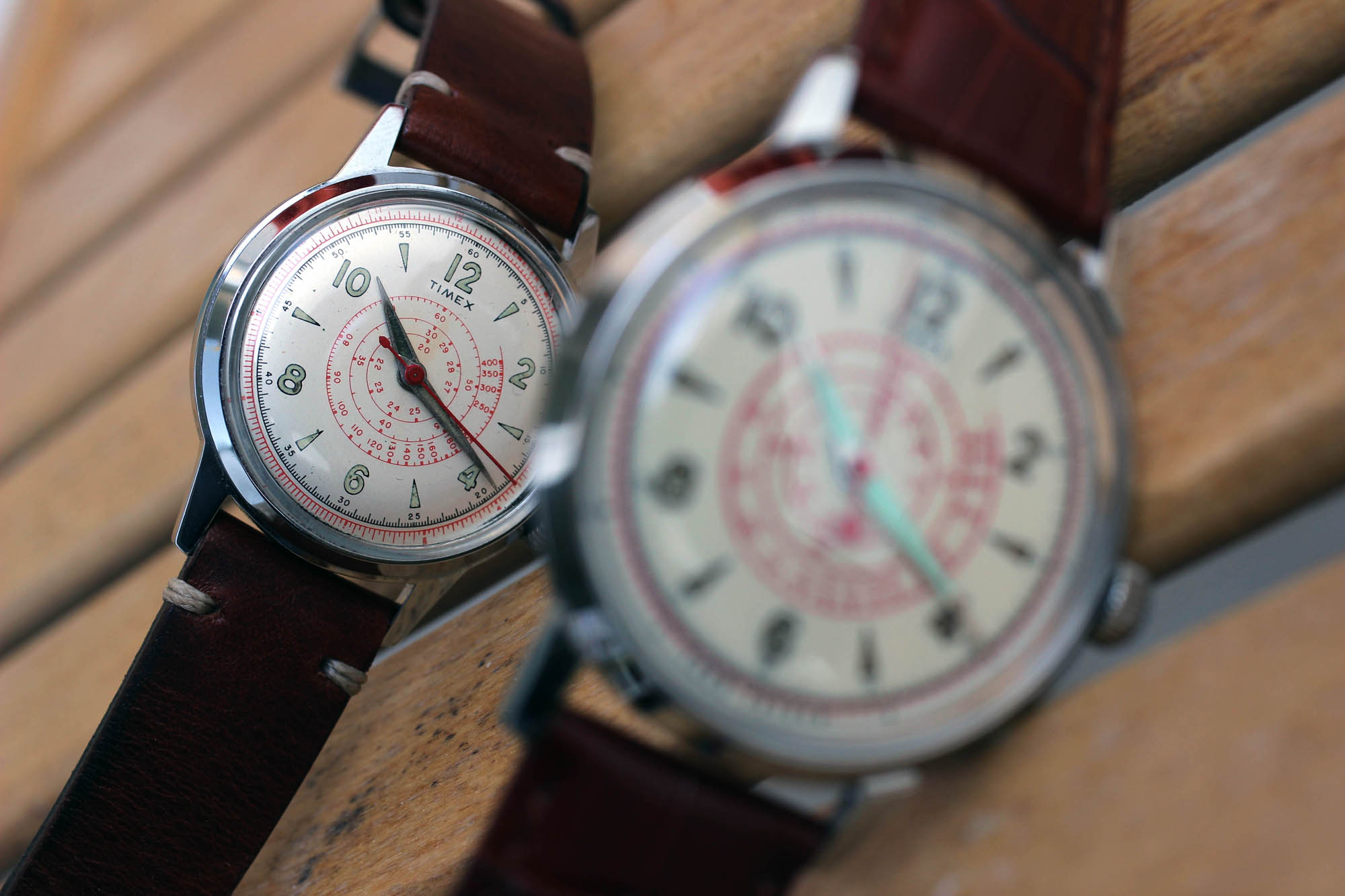 Well, the Timex x Todd Snyder Beekman won’t give you a ride to the office, but it will make it classier. I don’t check on all the quartz watches being released, but I do for sure remember this one. It grabbed my eyes in a flash, as I guess it did with many other eyes available on the market. The diameter has increased a bit, reaching 40mm with a thickness of 12mm. The dial is cream-ish, resembling the aged white-silver dial of an original Timex Southampton. As you can see on side-by-side pictures, the dial is nearly identical. There is just a smaller gap between the telemeter scale and minute track. For better legibility, Snyder decided to go black for its telemeter numbering. You will also find Todd Snyder’s name below the scale. I have to say he did it in a very gentle and respectful way. 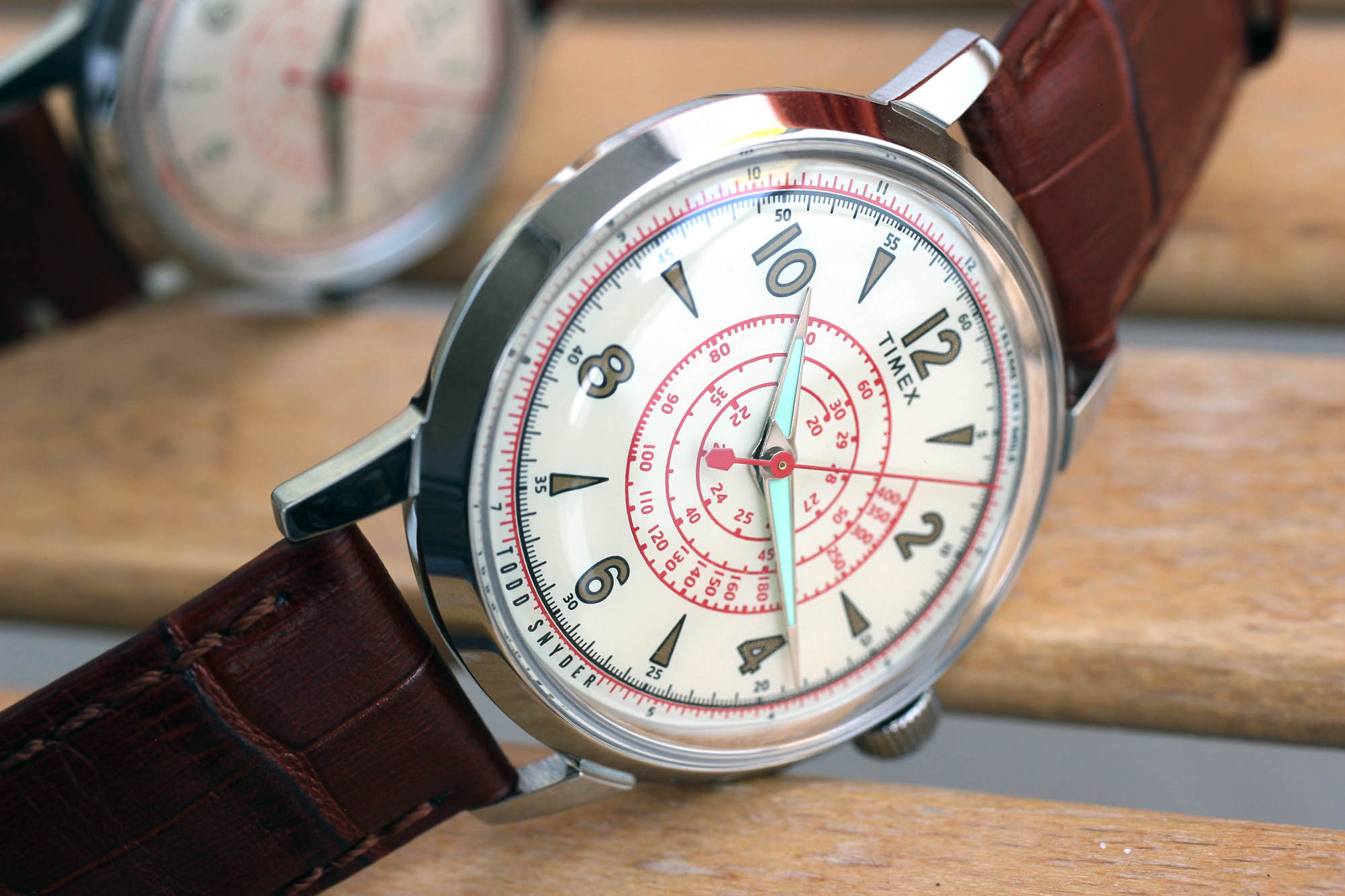 There is no lume on the hour numerals and markers. It has a thin black stroke and is filled with some brass-like color, that is so strange, unique and disturbing at the same time, that I like it. It is a bit different from the original watch, of course. Would I have been a bit like Buzz Aldrin, I might consider to deck-out my wrist with the unique combination of both Timexes on the same custom made strap. 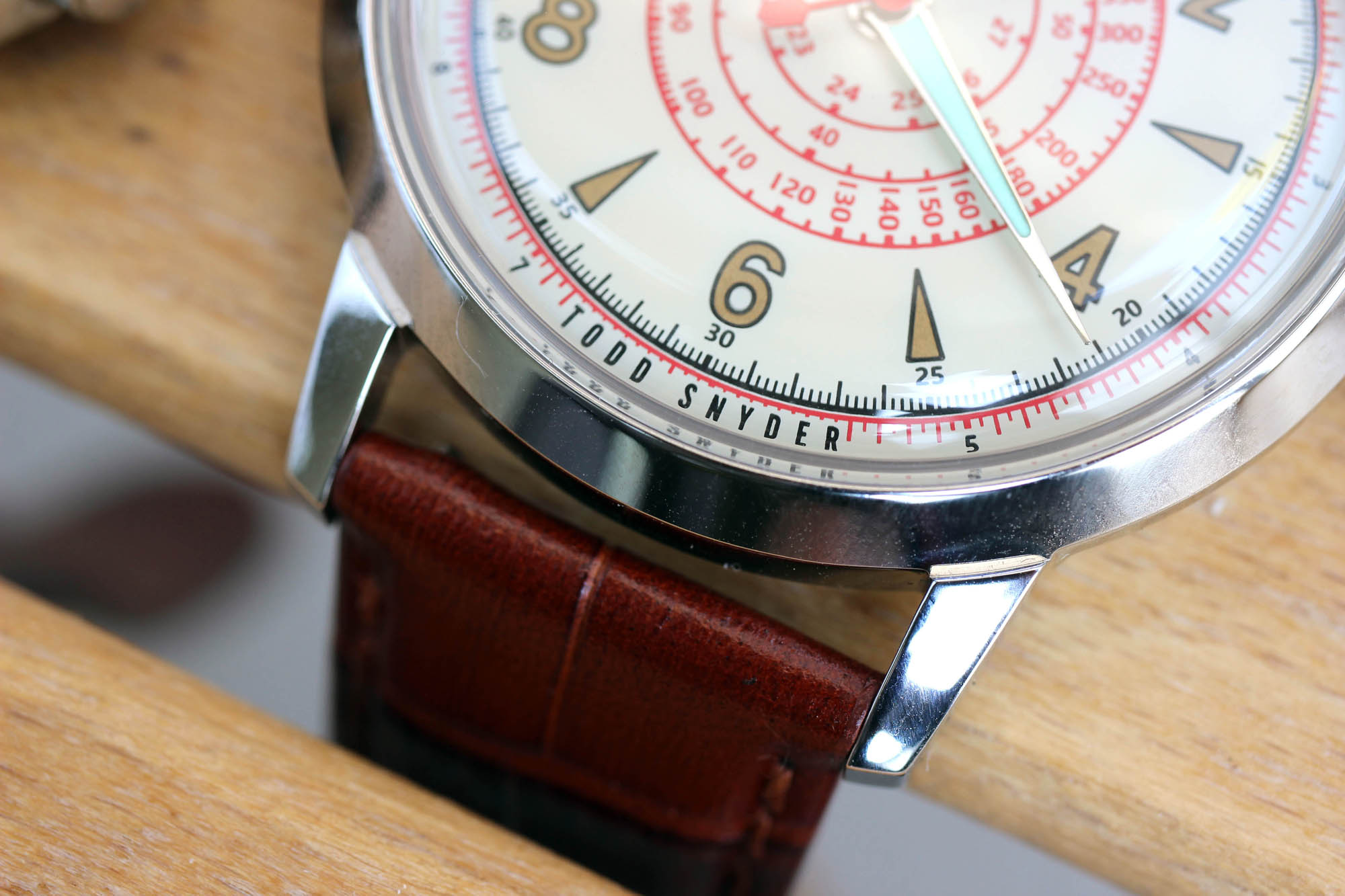 If you compare the two, you have to admit, that original is more decent and tide-up. The red curled tachymeter track is more subtle, with a central “chrono” hand having enough contrast to it. Snyder decided to make the tachymeter track on Timex Beekman more prominent and gave it the same thickness as the central second’s hand. This brings us to the most arguable fact about this watch. What is it exactly and how does it work? 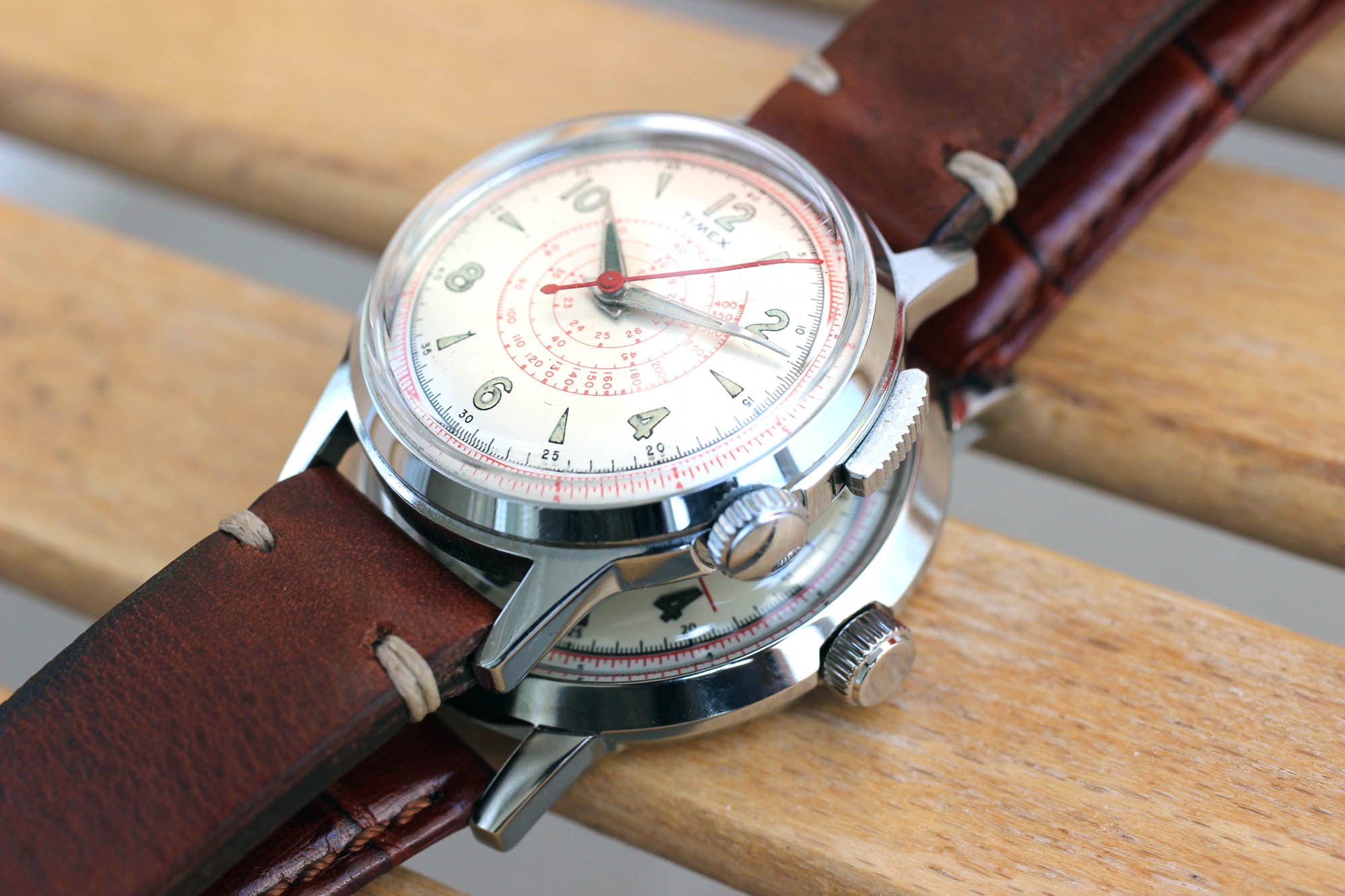 Back to Timex Southampton

The original Timex Southampton utilized the most extended lever you ever saw sticking out of the watch case: to stop, reset and release central hand. In a neutral position, it works as a second hand. If operated by the lever, it acts independently from the movement, being able to be read easily against the scales. If we would call Timex Southampton poor man’s chronostop watch, Snyder Beekman enriches the poor. If you want to use any of the scales, you need to pull out the crown, hence to stop the watch. I see that look on your face. 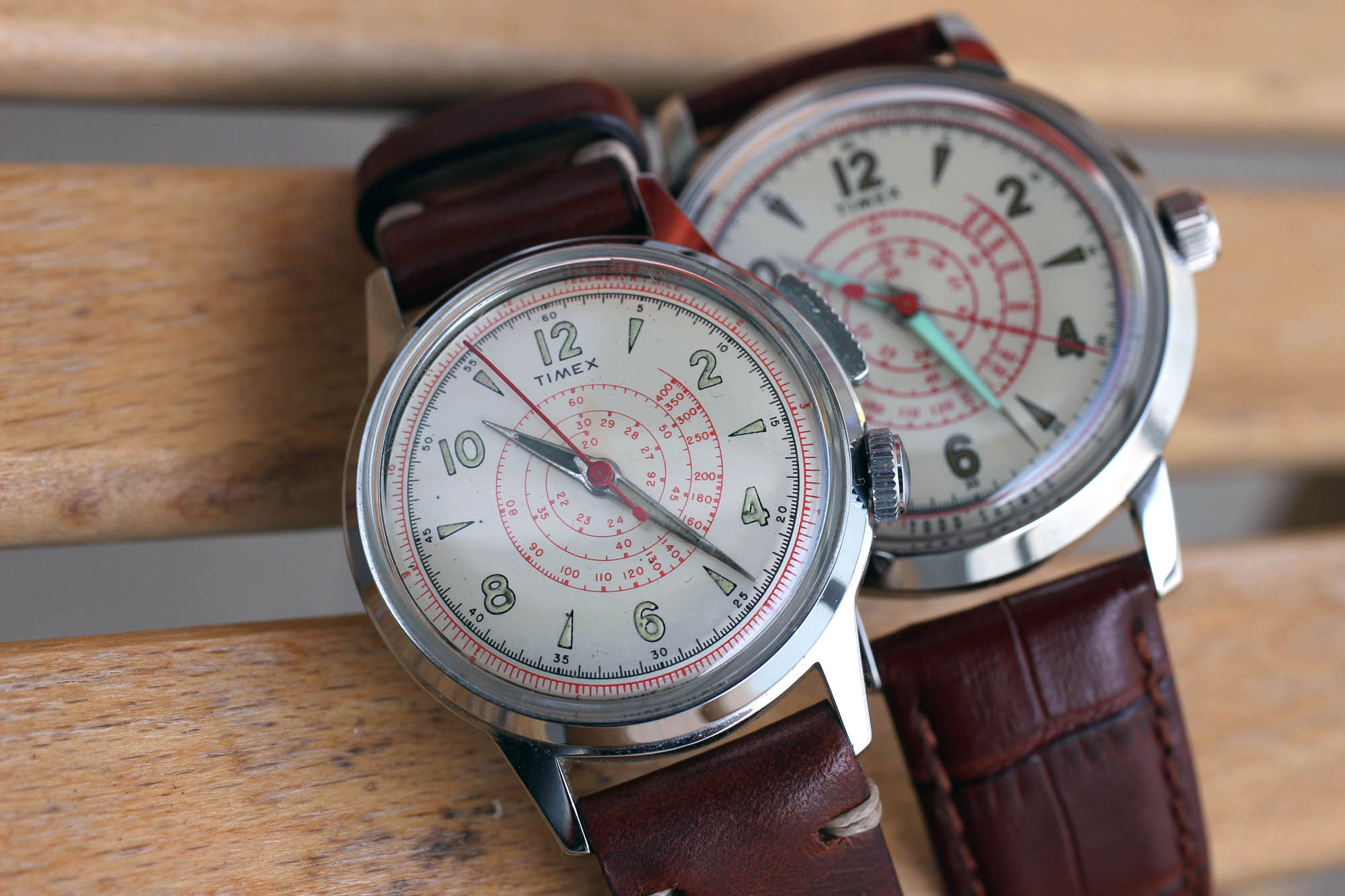 If we look at it from a telemetric and tachymetric perspective, you get amusement at best. So far, our imaginary glass of water seems half empty. But we are sure that speed reading was not a primary goal here. If we look at Timex Beekman as an original and classy three-hander with an emergency or funky option to measure the speed or distance of objects, our imaginary glass of water seems on the contrary half full. 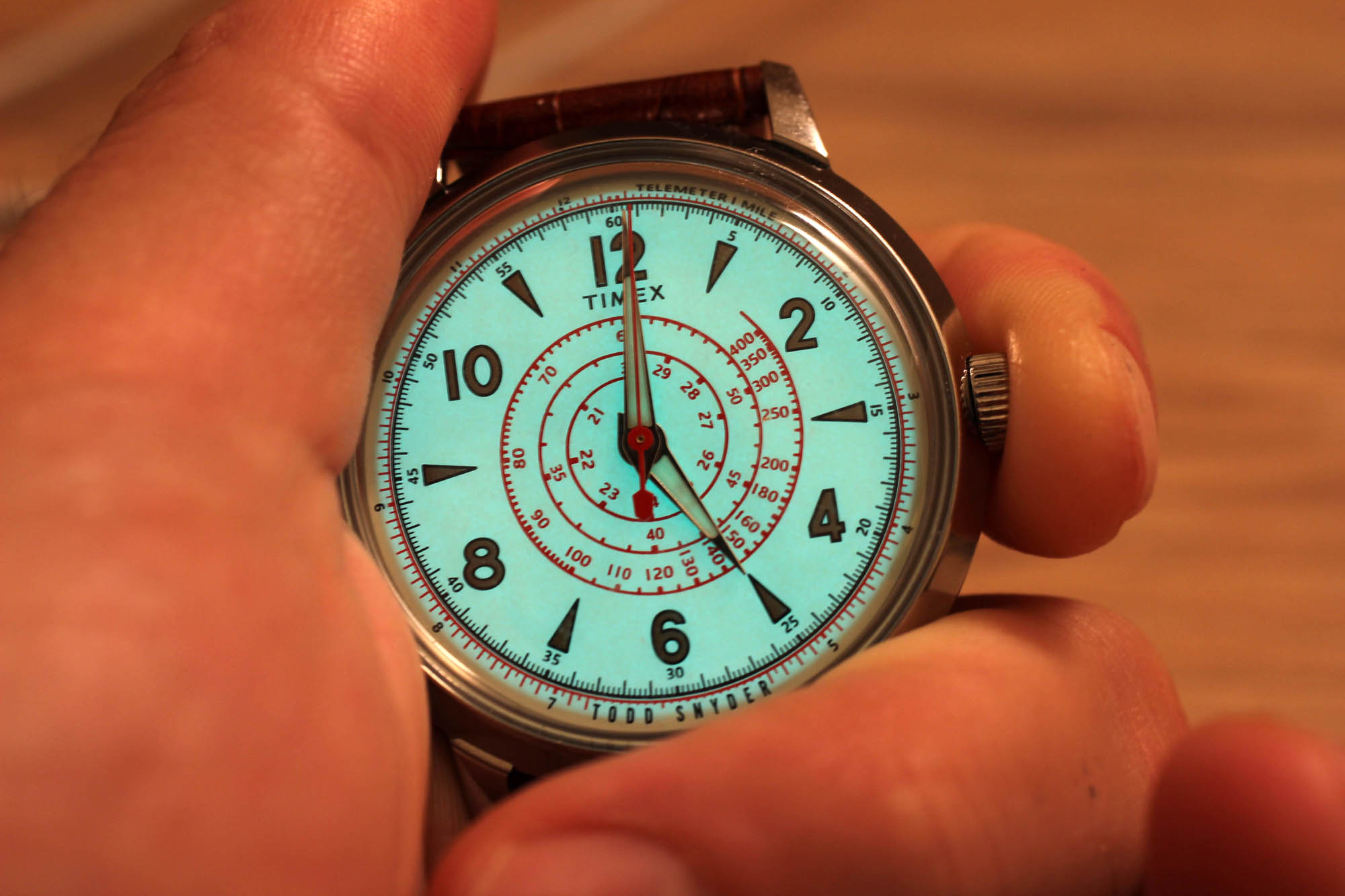 By the way, I have no idea why the watch is called Beekman. But I know, that by pushing and holding the crown down you activate Beekman’s major differentiator to its predecessor. There’s an illumination system called Indiglo that lights up the entire dial. Each push of the crown activates Indiglo, but it is invisible on direct light. You can see below how it shines in the dark. In semi-dark conditions it is bluer, in total darkness light is almost green. Pretty cool. 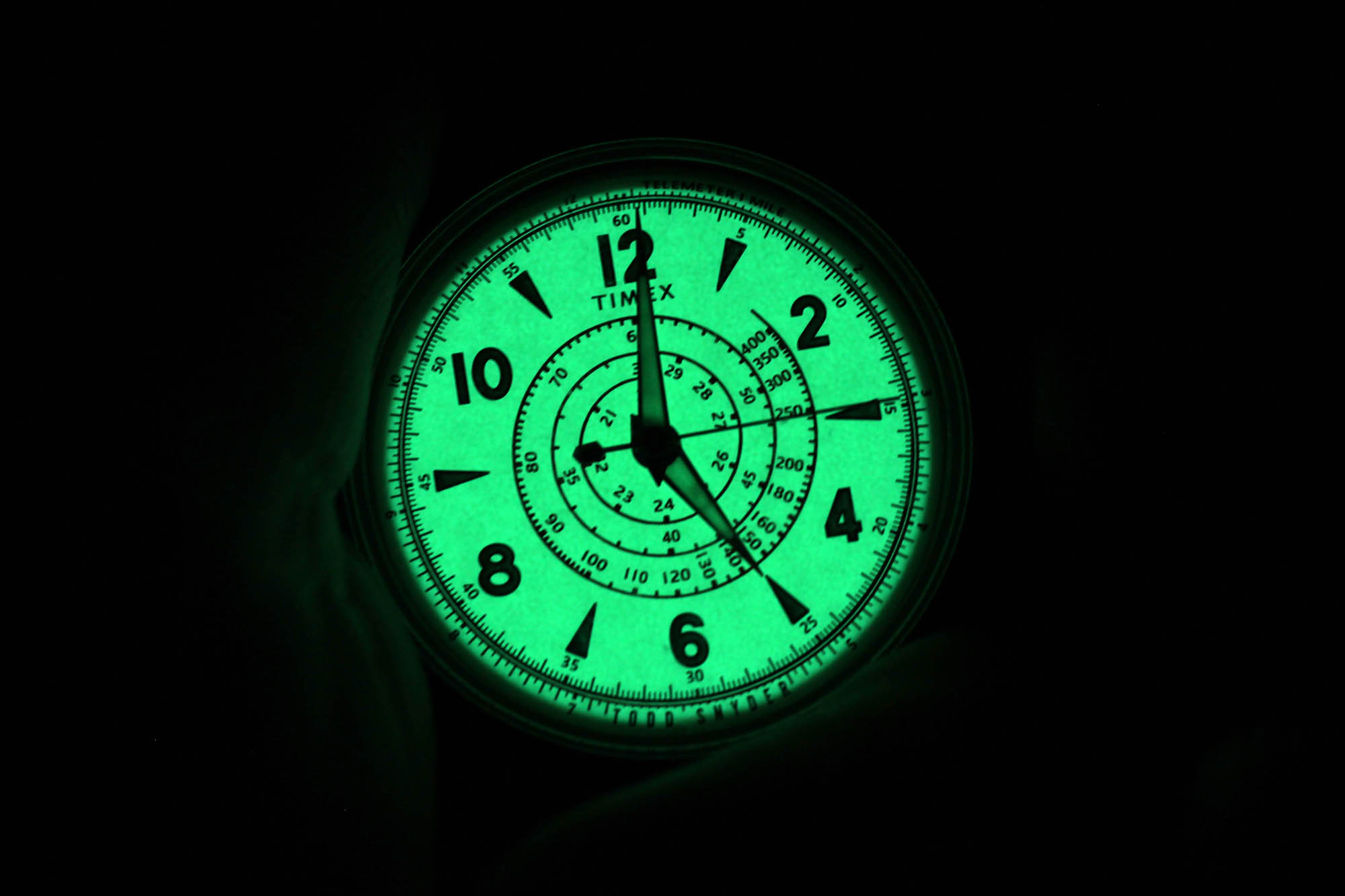 Case shape and lugs angling are similar in both models. While Timex Southampton has an 18mm lug width, Beekman increased it to 20mm. Happy to see that Beekman is fitted with a brown leather strap, exactly as the original one was. For easy strap changes new Timex Beekman features quick-release pins. The strap is from India and the movement is from the Philippines. Purists could feel more satisfied to learn that the quartz movement was designed in-house by Timex. When it comes to water resistance, I would say that with 30m water resistance, I would treat Beekman as gently as its 60 years old sibling. 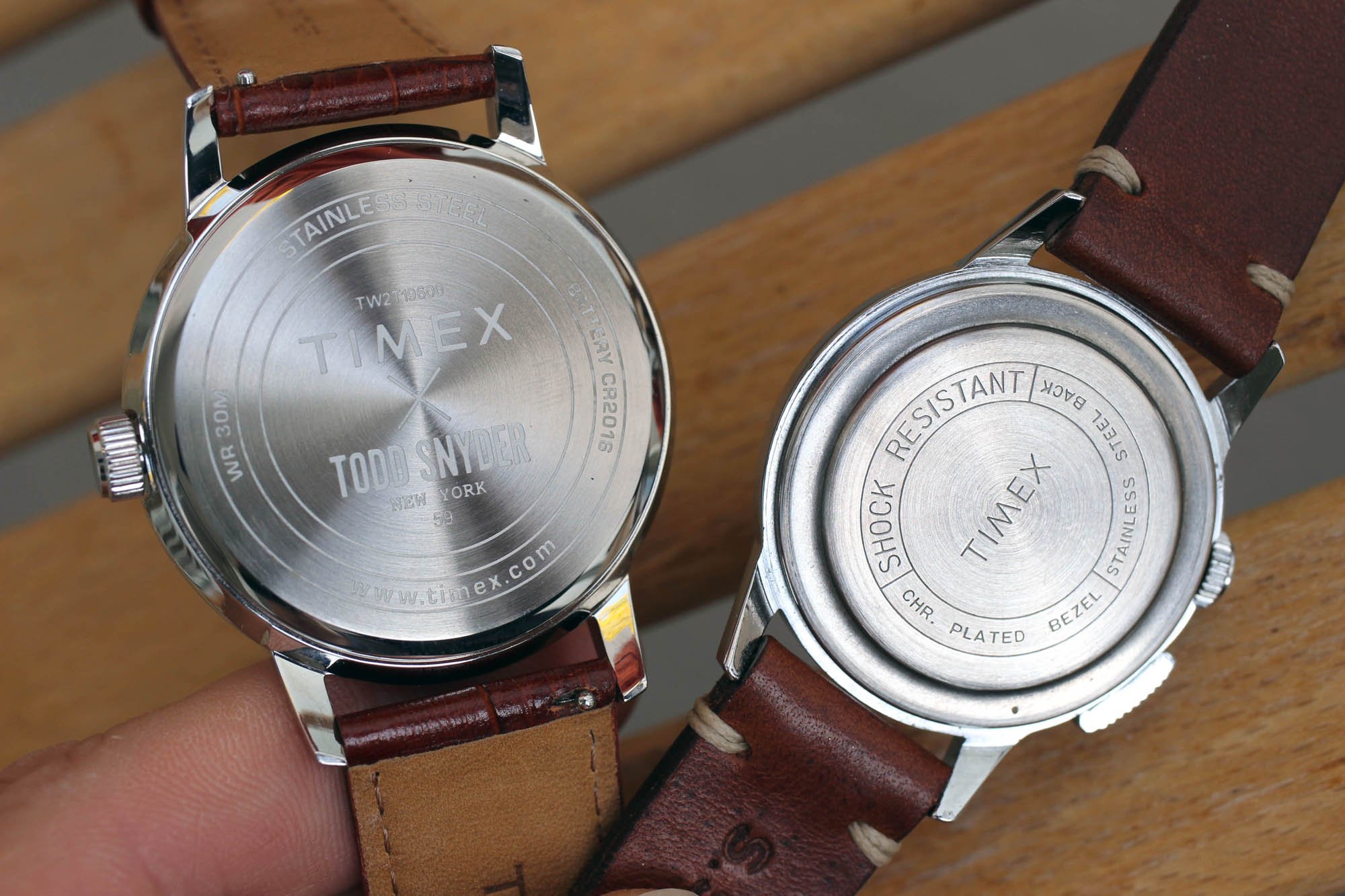 From Timex to Rolex?

We know there are incomparable differences between the Southampton and Beekman. It was not a plan to give a verdict on which one is better. We did it because we wanted to see them reunited. We are happy to see that an entry-level watch as the 150 USD Beekman, creates enough space for re-interpretation of forgotten stories. It might be a very good way, to get more people into vintage watches. 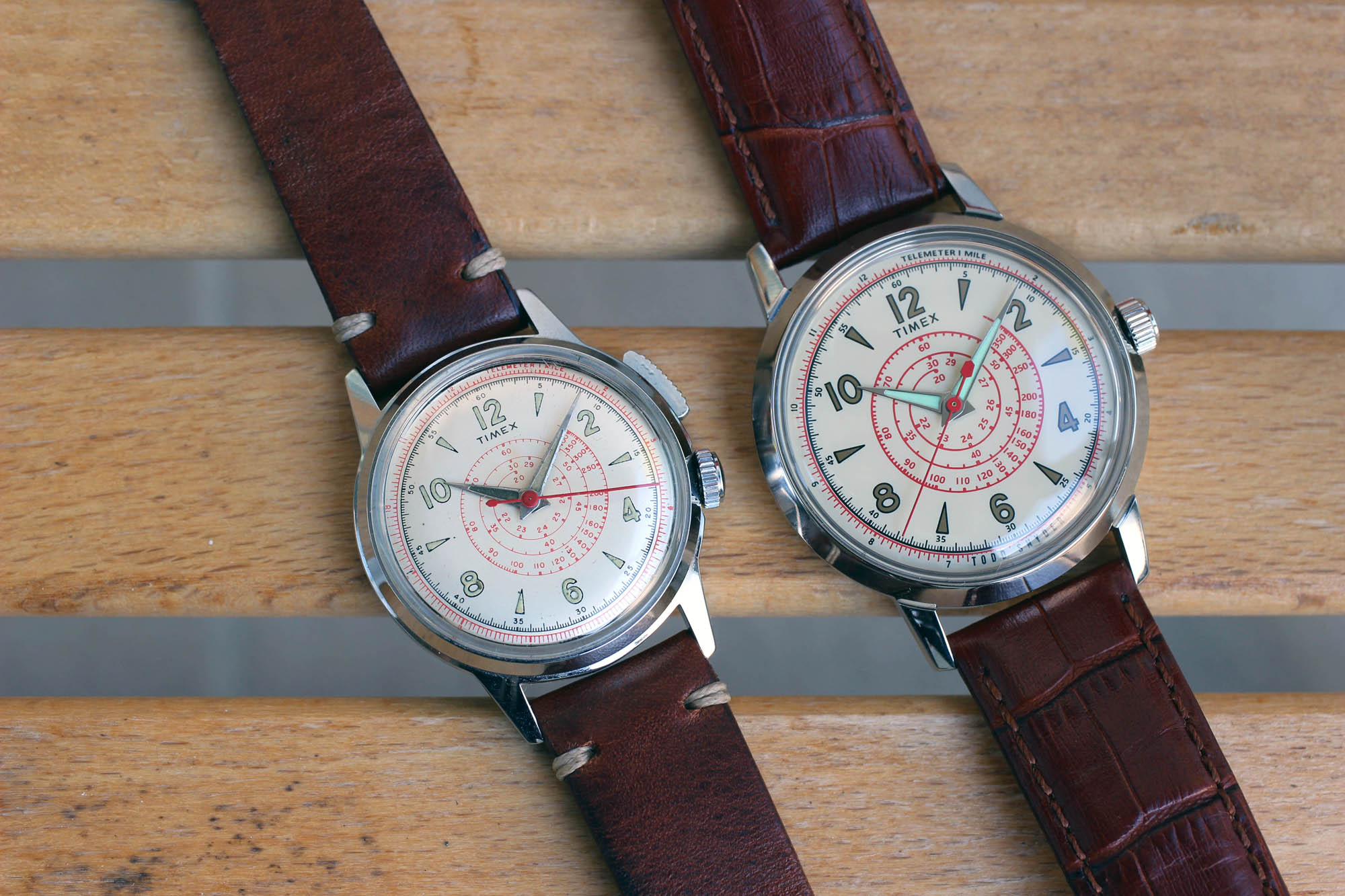 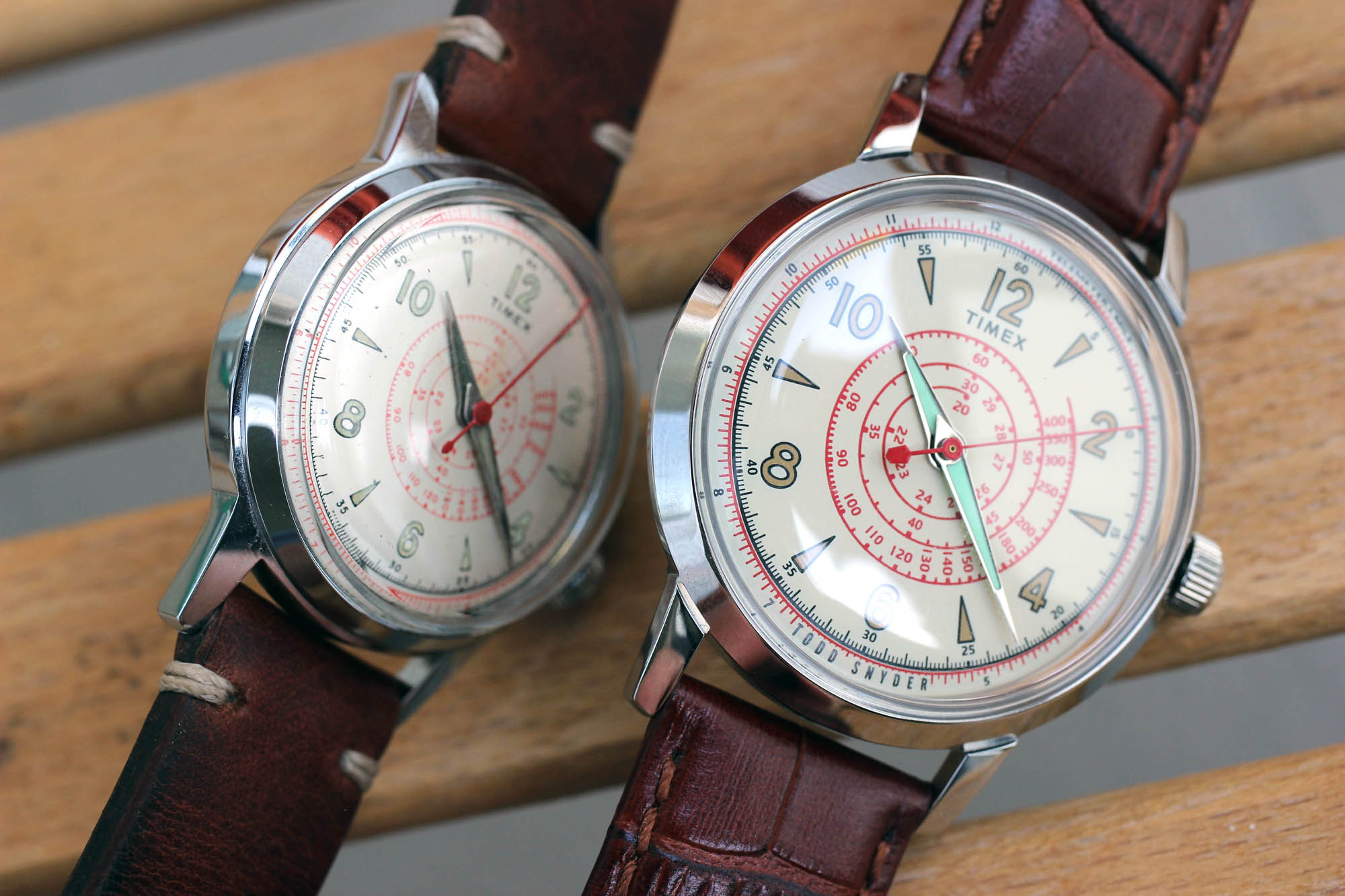 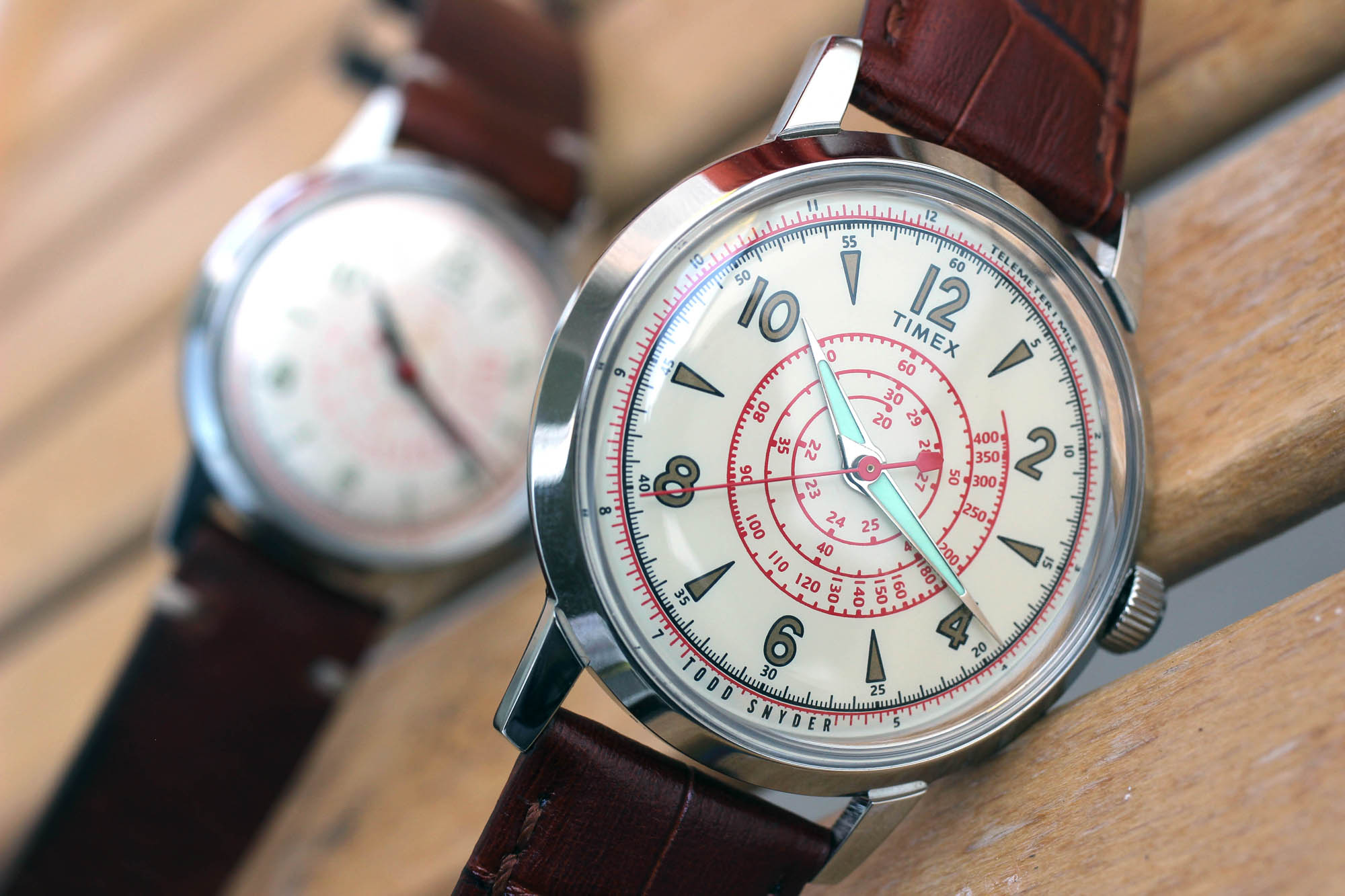 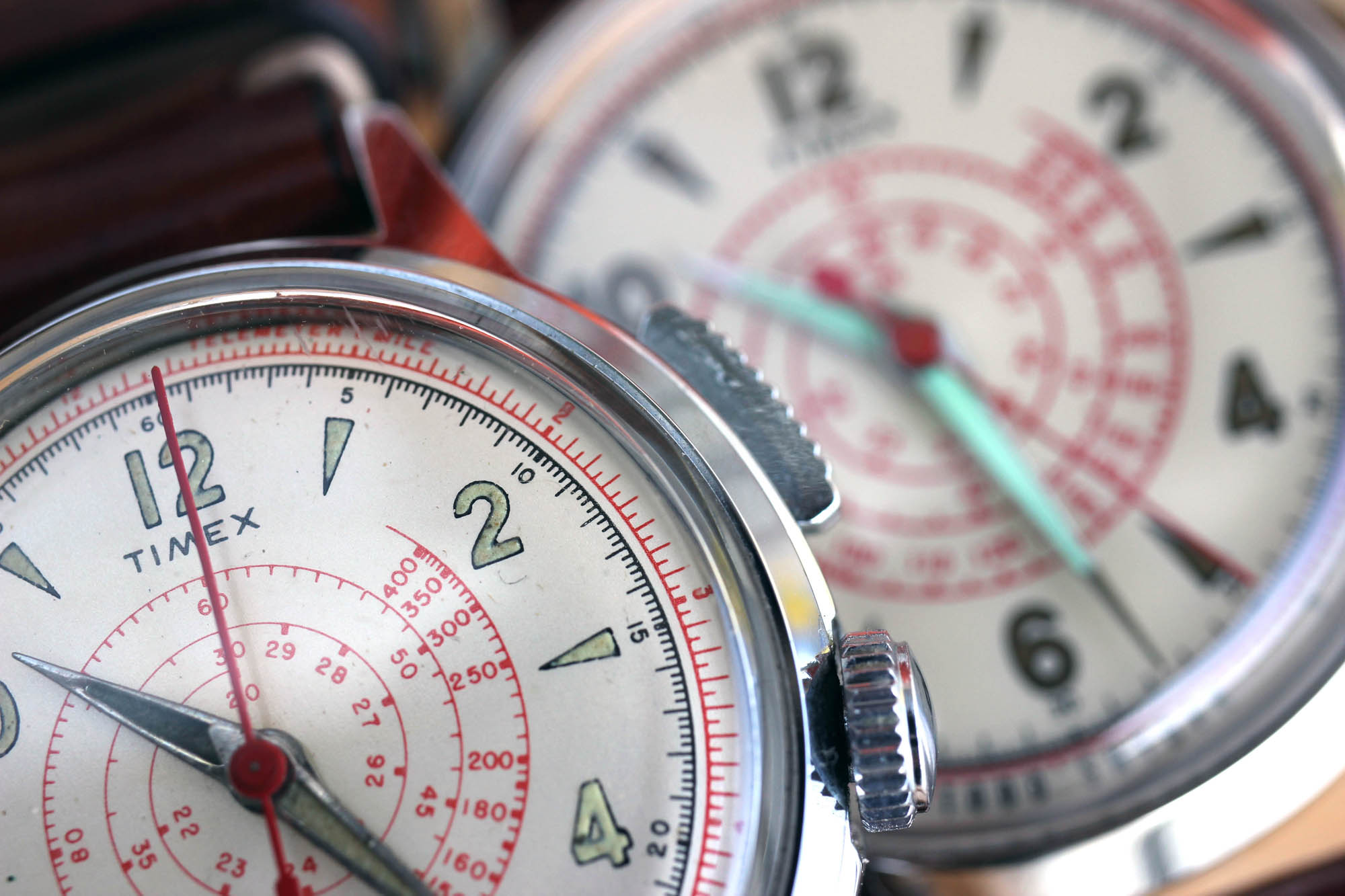 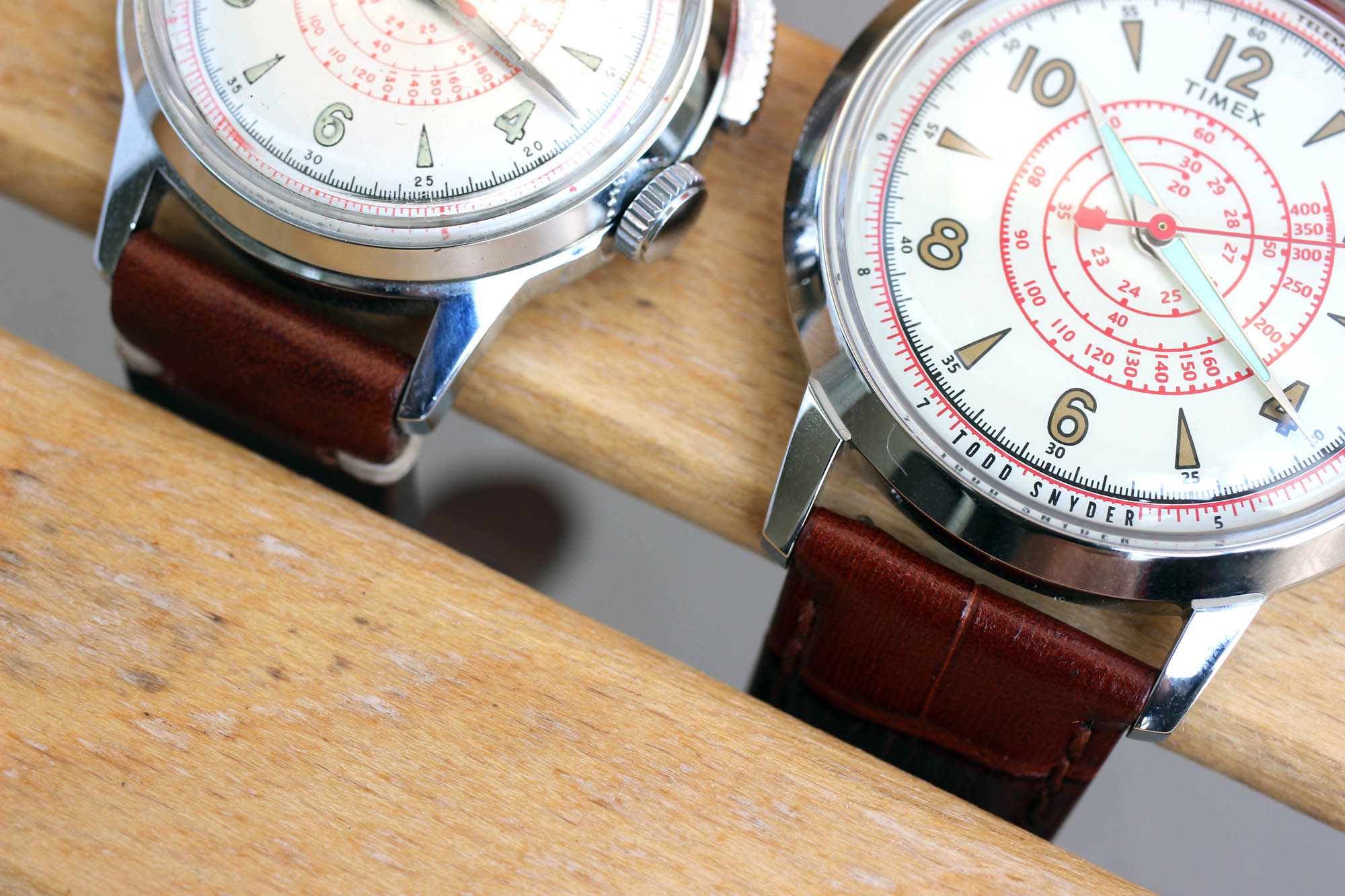 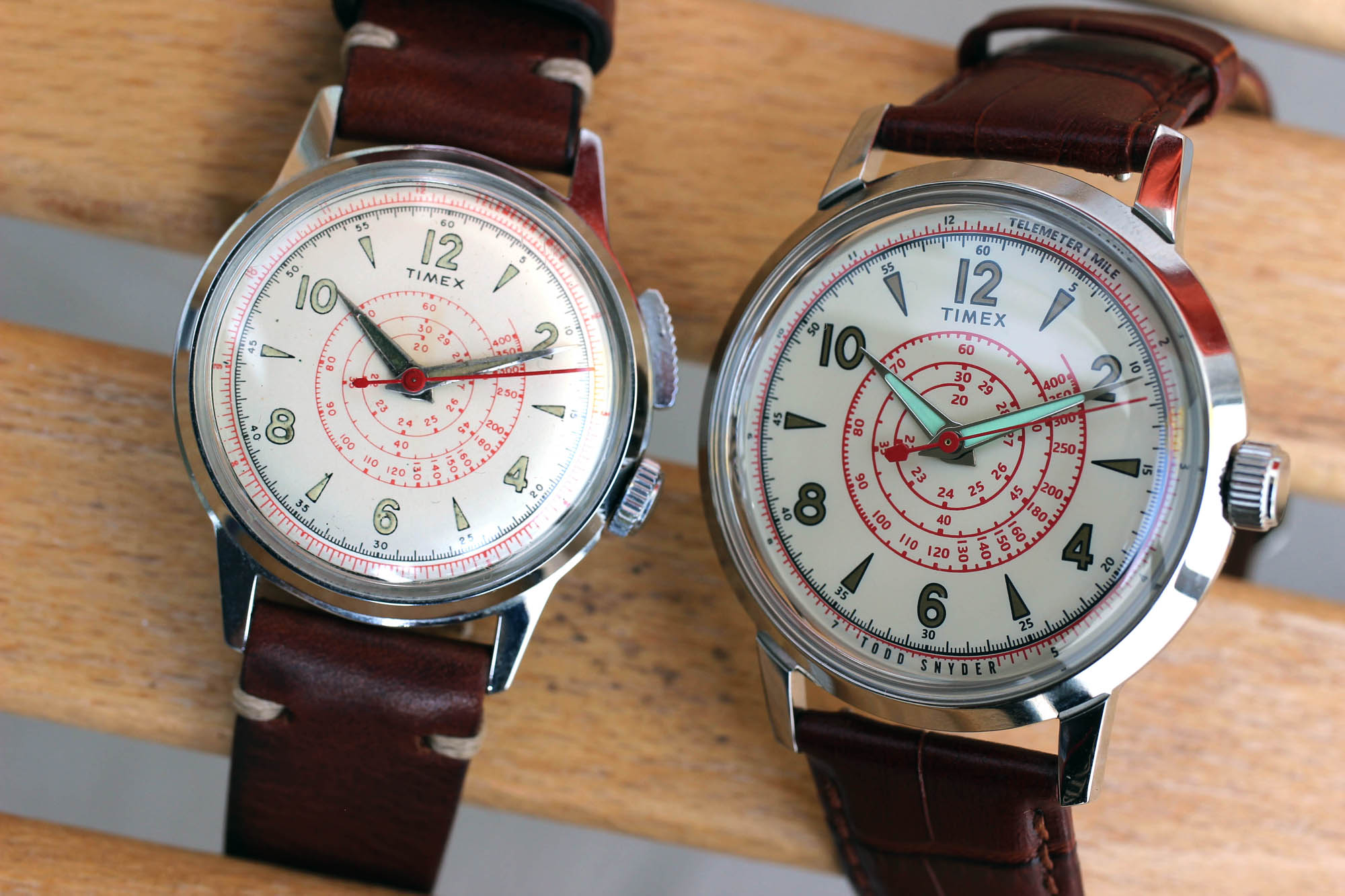 Hot Topics
Introducing: The New Seamaster Professional 300M 60 Years Of Bond — With A Special Animated Case Back
105 comments
Are You Still After An Omega × Swatch MoonSwatch?
85 comments
It’s Time To Invest In A Dress Watch — Our Picks From Breguet, Omega, Grand Seiko, And More
72 comments
The Rolex Waitlist Conundrum — How Much Will The Price Of Your Watch Increase While You Wait?
50 comments
The Best Omega Speedmaster Watches Of 2022
40 comments
Popular
A Question From A Reader: “Which Modern Speedmaster Is Closest To The Original Moonwatch?”
Robert-Jan Broer
14
The Ultimate Sports Rolex – The Explorer II Reference 1655
Robert-Jan Broer
17
Grand Seiko SBGA211 ‘Snowflake’ And Why I Didn’t Buy It
Robert-Jan Broer
22