Where has the movement gone?
Tomas Rosputinsky
comments 0
Share

The chronograph that isn’t a chronograph but works like one. A bit confusing, right? But how fun!

How to start. The Timex Southampton is anything but an ordinary watch. Pop open a case back, and you won’t be sure what are you looking at. There are a few ‘you have never seen these kinds’ of long levers fixed on a simple construction that looks like a fake watch from a Turkish flee market. Very similar to that disheartened feeling when your eyes desperately gaze at empty vegetable stands in the supermarket right before Christmas Day. There is only one question on your mind: “Where the hell has the movement gone?!” 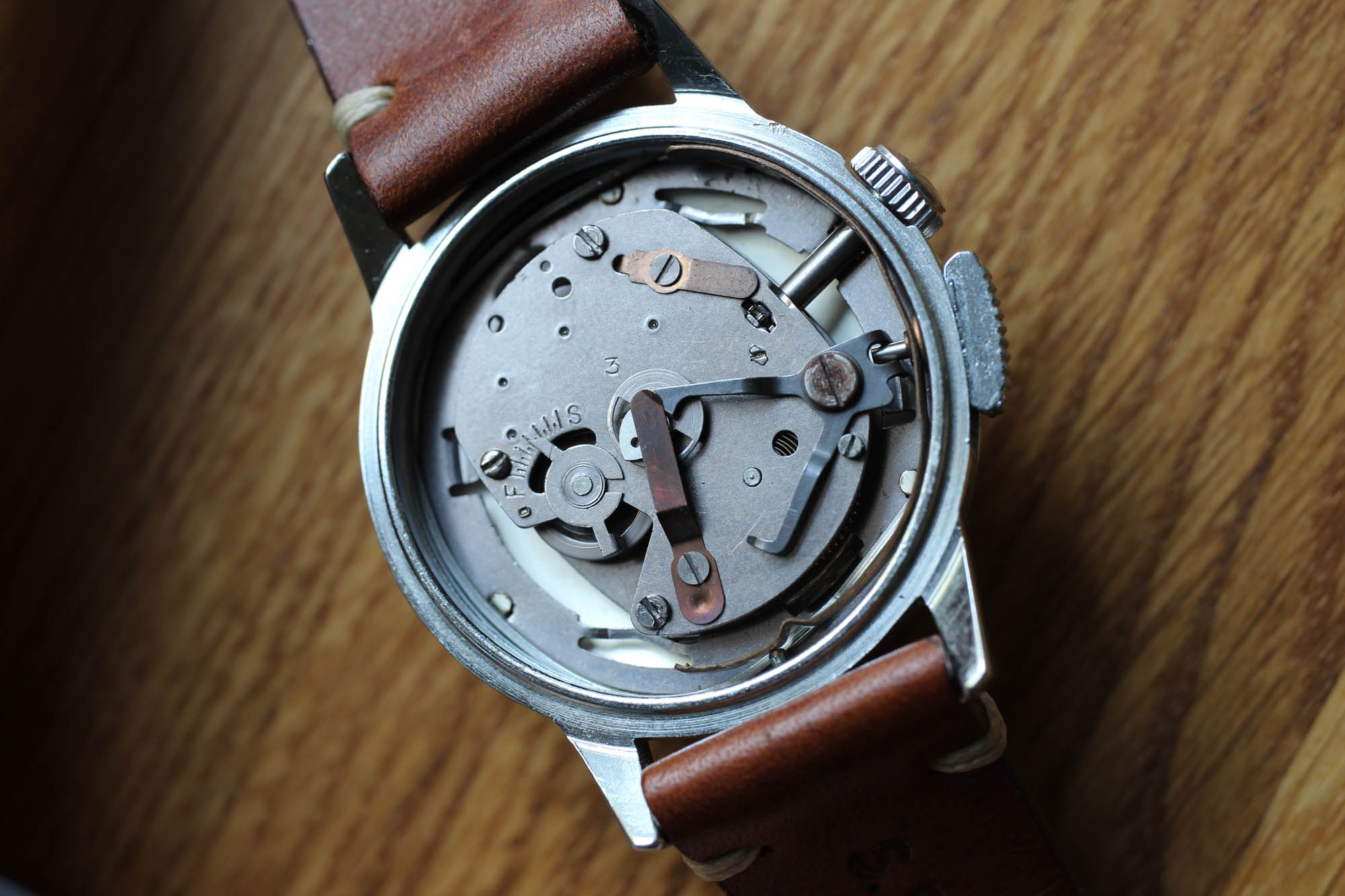 A look inside is very similar to that disheartened feeling when your eyes desperately gaze at empty vegetable stands in the supermarket right before Christmas Day.

To calm down, I highly recommend putting the case back on the place, turning the watch around and focusing on the watch face. The Timex Southampton has a surprisingly clean and balanced dial. Would you say that it is 35mm in diameter only? It looks very spacious, and the indexes have a lot of room to breathe. The Arabic even numerals are written in a generous and quite fat sans serif font that looks modern even today. The odd hours have been replaced with triangular indexes. 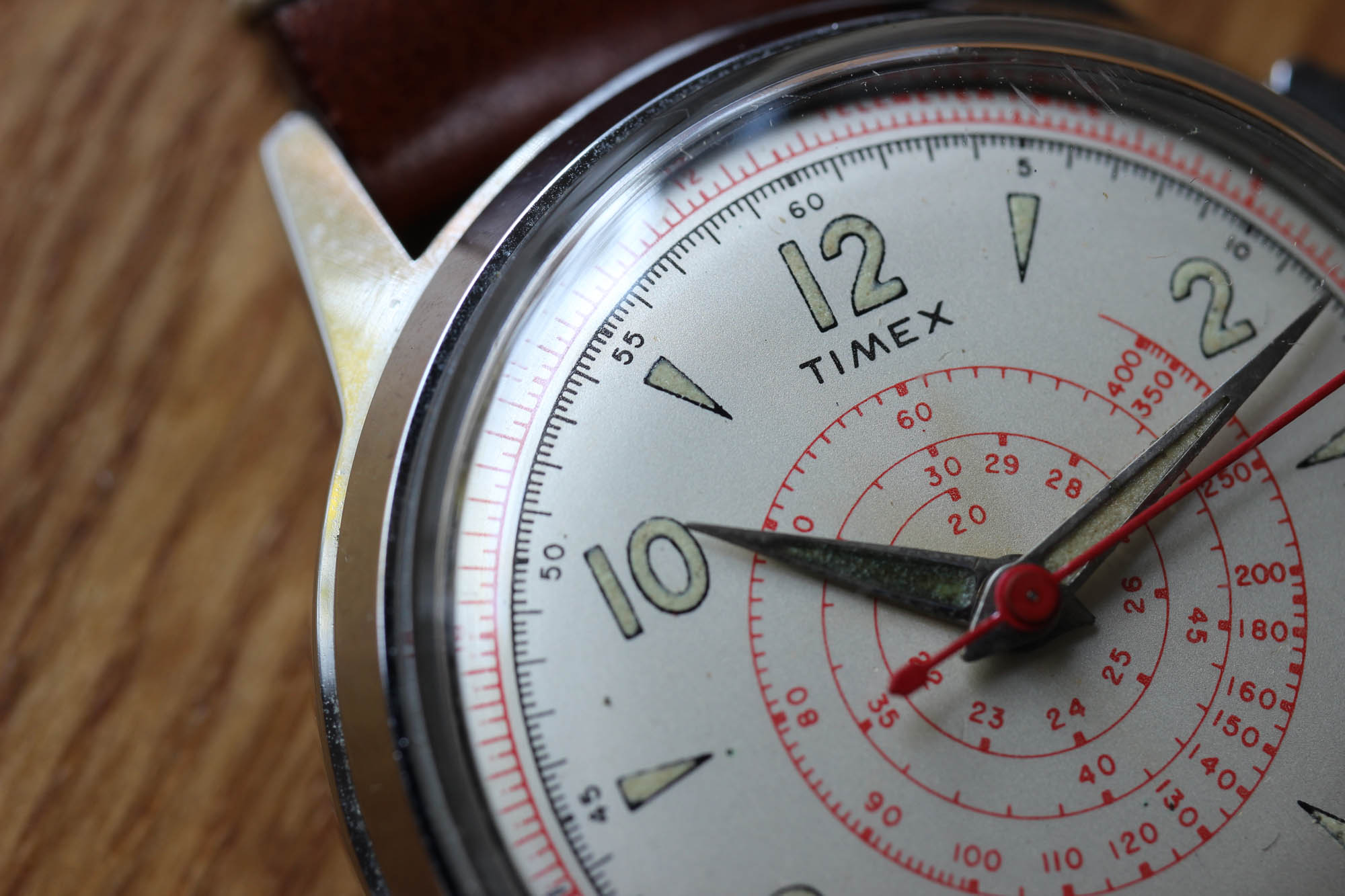 Both the numbers and indexes have a luminous radium material covering, also visible in hands. What’s interesting is the full range of patina variety found in different Southampton models. Reminds me of the Breitling SuperOcean, where you often find discolouration between the hands and dial. The linear ageing is a warning sign for possible re-luming. As with the SuperOcean, you can hardly see the same two Southamptons with same patina. My Timex Southampton has a beautiful creamy patina on the dial, with hands of a more greenish hue. 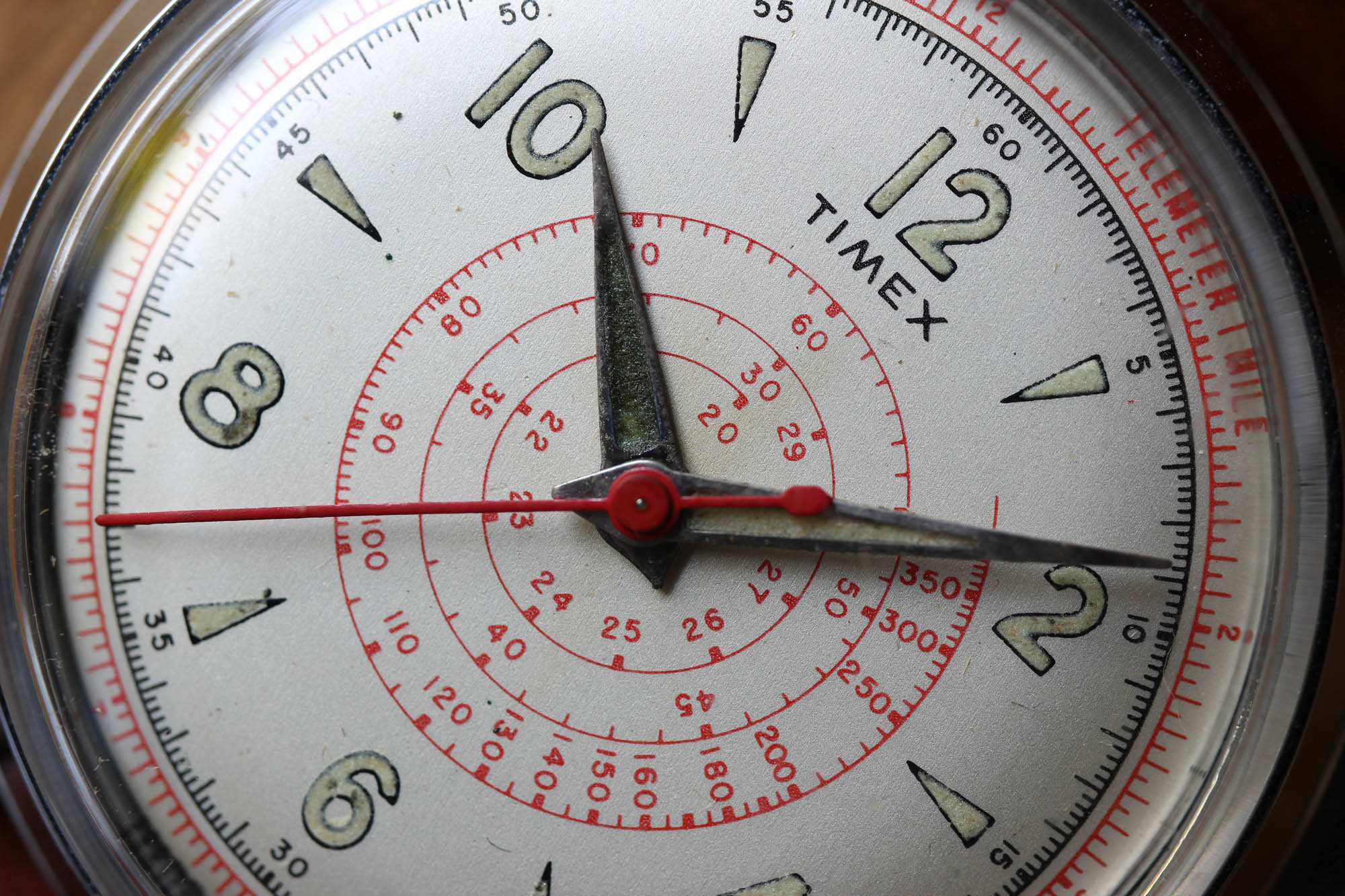 Also, notice the discolouration between the minute and hour hands. One of them is much darker than the other. Under UV light, both the dial and hands respond unanimously, so I have zero doubts on originality even if the patina varies so much.

Where the fun begins

Connecting the dots on the three and only elements in red, you get what might be called a unique selling proposition of this watch. The trio of usual suspects consists of the central second hand, an outer telemeter scale and the central spiral tachymeter scale or so-called “snail.” Nothing unusual up to this moment, yet still quite valuable when present on a vintage watch dial, especially the snail. Skating on very thin ice starts if you move your attention over to the edges of the case. There is so few, yet contradicting information about the watch’s function and name. 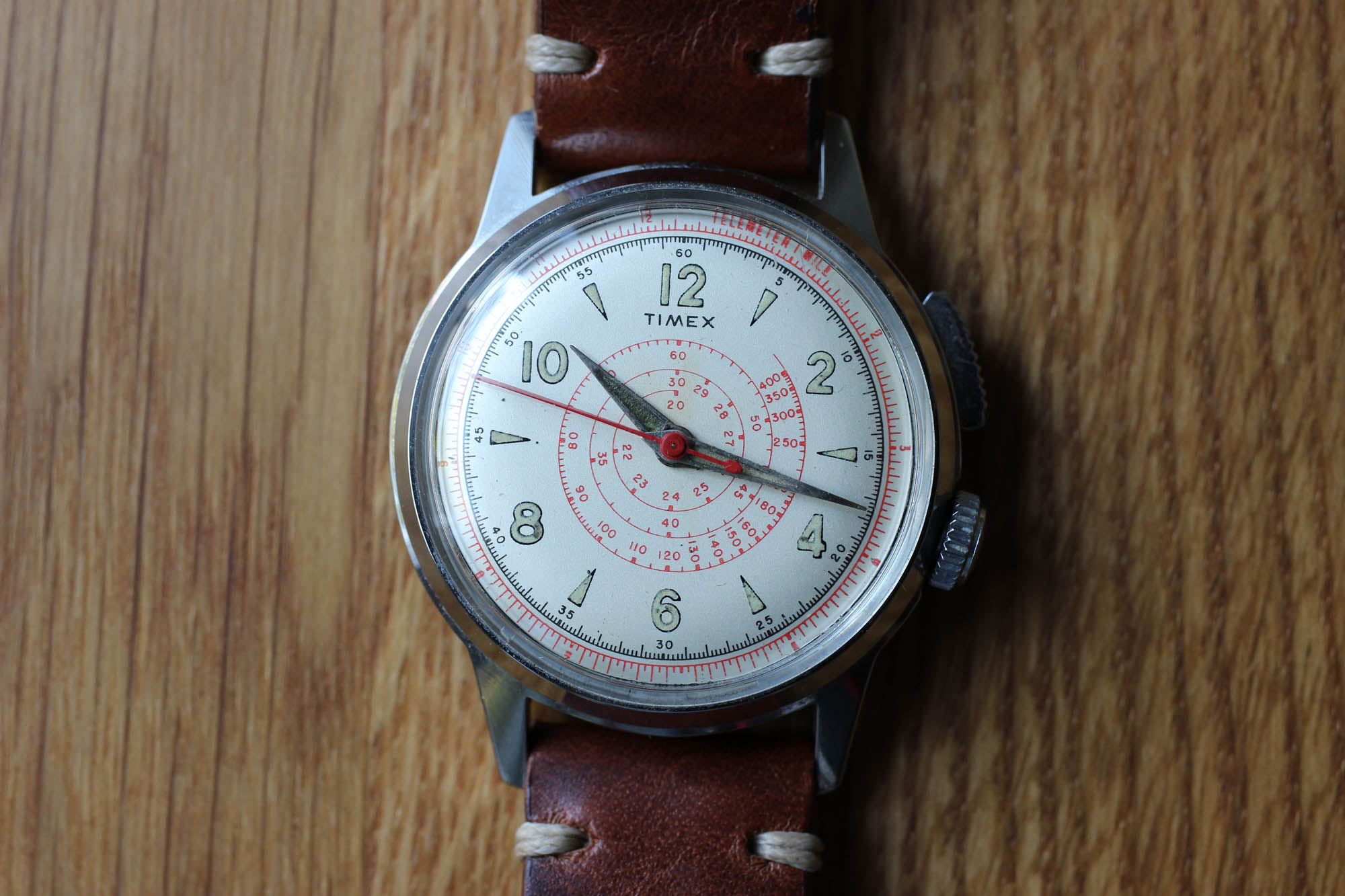 A chronograph or not?

I don’t want to pour more gasoline to the fire, so I will describe just what I see. The copy of a brochure lists Timex Southampton under 12371 number. I don’t know whether it is a catalogue or reference number. For sure it contains the Southampton as a new chronograph stopwatch with chrome bezel, sweep second hand and radiolite dial. Some people laugh (especially when looking under the case back) when hearing term chronograph linked to Timex Southampton.

Does it comb your hair too?

Bunch of misleading information claims that with stopping the central hand, the entire watch stops. Or that there is no fly back to zero function, which is not true. On a side where usually sits standard upper chrono pusher, there is something what original manual names as a slide button. Yes, I speak about in that pointlessly oversized thing that looks a bit like a rooster comb. As it spreads nearly down to position at three, the crown is unusually moved to the area almost at four. If you take just this elements composition into account, you get pretty exciting weirdo watch with a classy face. 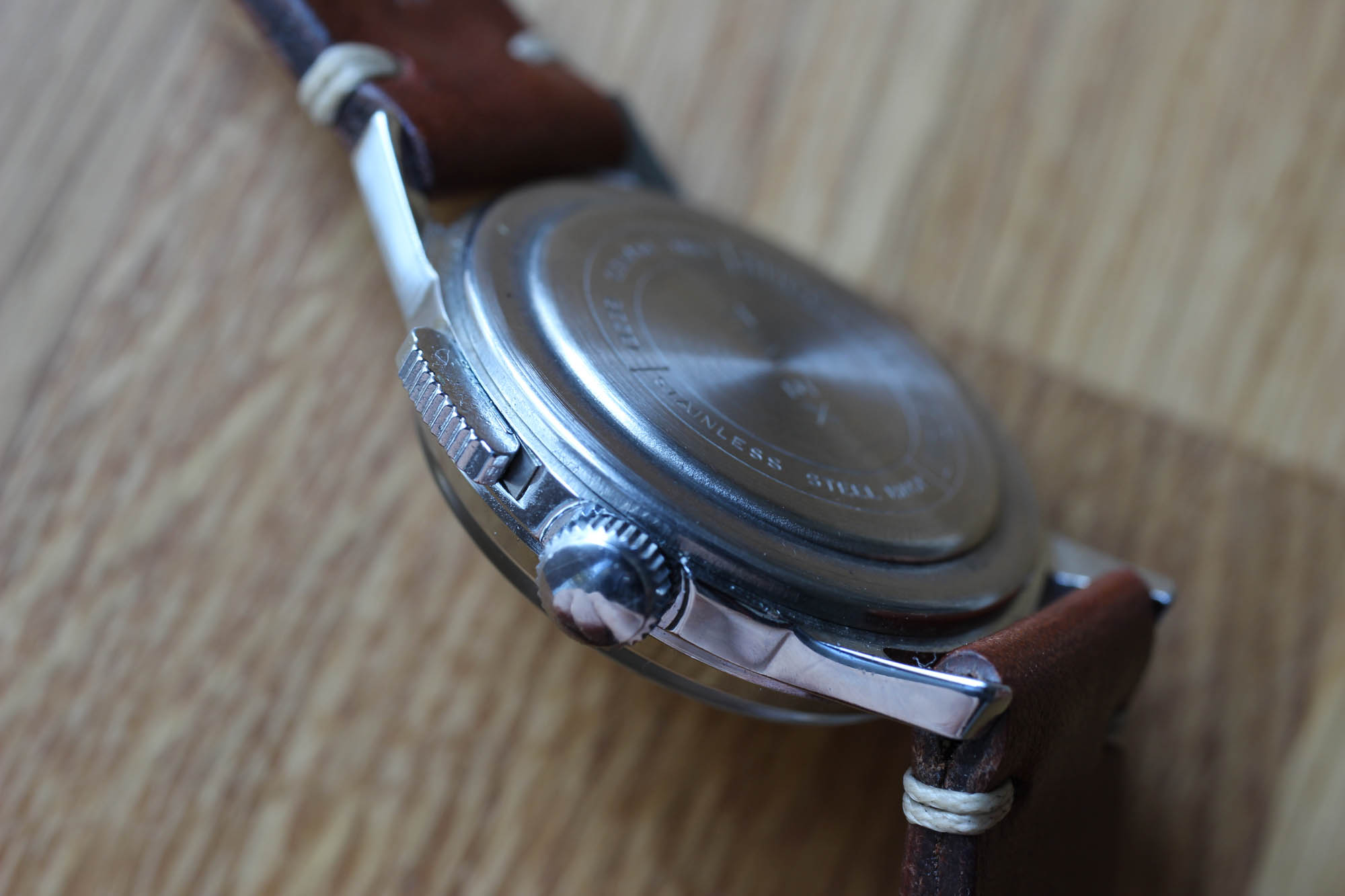 My watch works exactly as the manual describes. When slider sits in its neutral middle position, central hands patrols around the dial dressed as a second hand. Manual says specifically that watch continues to run even if sweep second hand is stopped. To do that, you have to move slider actively against the case, away from the crown. That is the weakest point of my specific Southampton. It takes a lot of attention to put it in, and the stop position is precarious. Sometimes it slips back immediately. It holds there very gently. The way I am holding our newborn’s diaper. 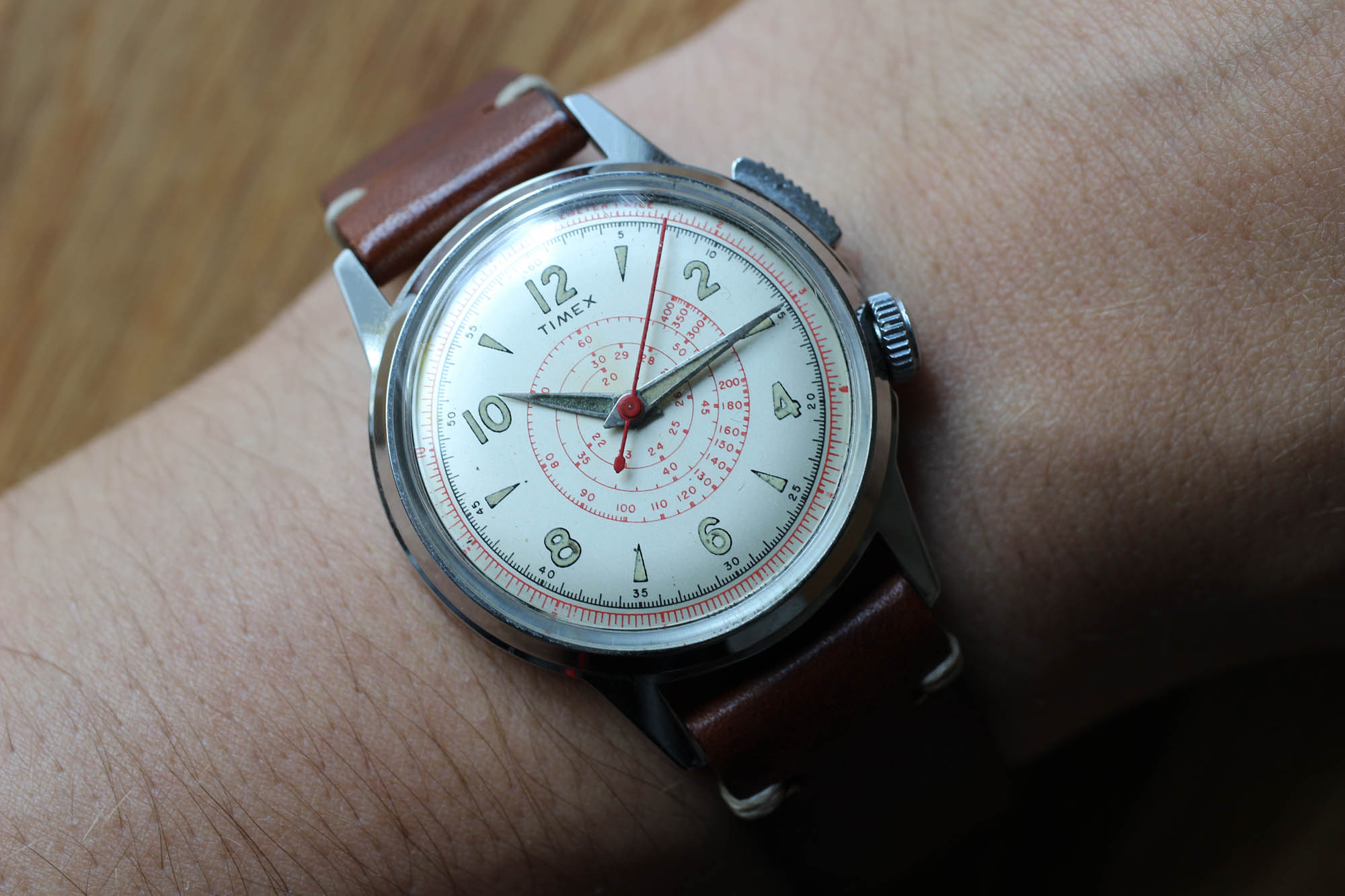 By moving the slider down to the neutral position, you un-brake central second that starts running immediately. Moving the slider further down towards the crown, second-hand flies back to zero. Whatever simple the movement looks like, the functionality is amusing. It reminds of recently reviewed unstoppable Tissot Mediostat that has small second hand and central chrono that in contrast to Timex Southampton, it never stops. Only by pressing the pusher at two you can zero it to twelve. 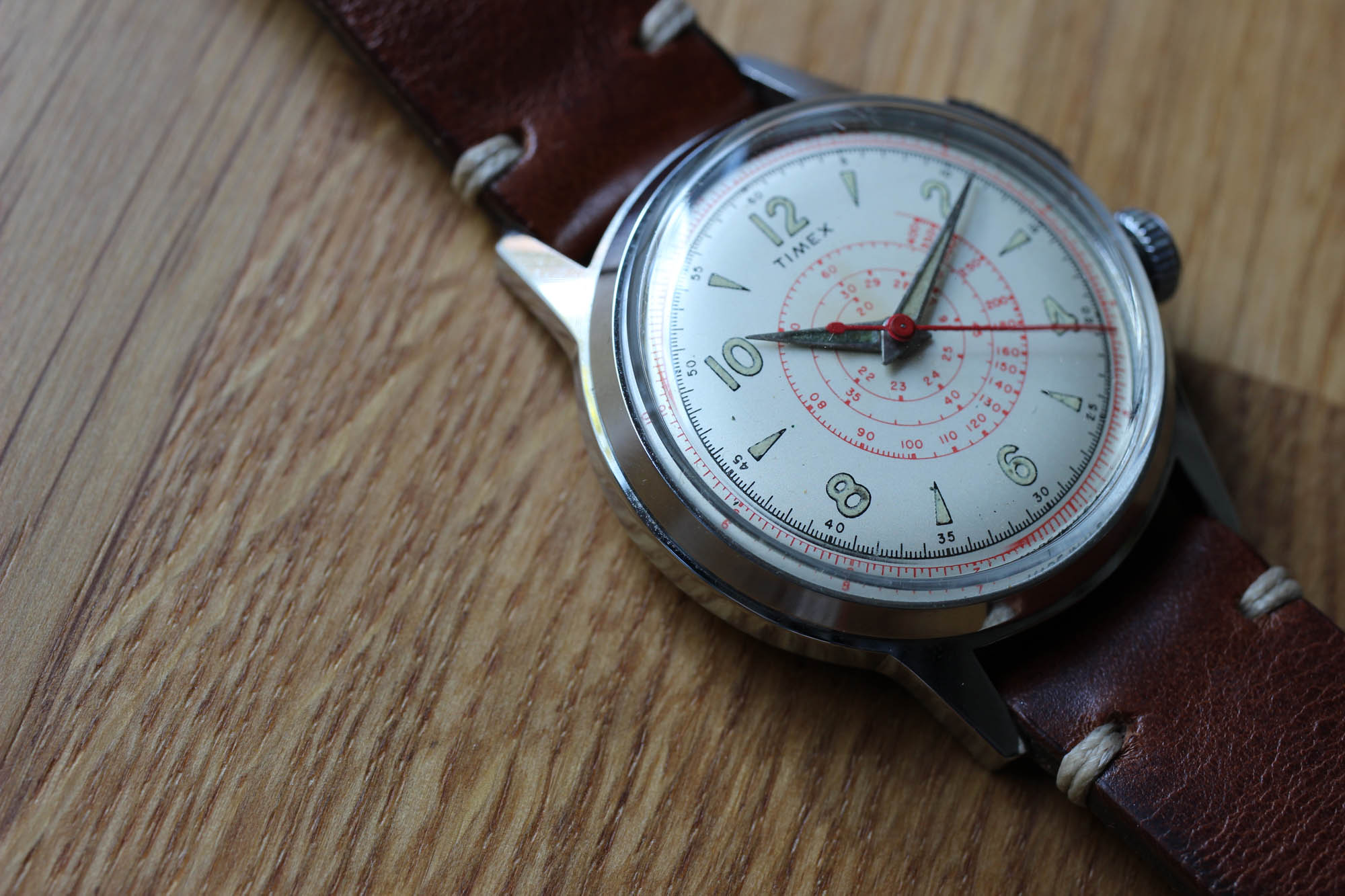 I don’t think I have any other vintage wristwatch with snail spiral track on the dial. More I look at it; more it makes me think about it. It is not axially symmetrical, yet it doesn’t trigger my OCD demon. It occupies half of the dial, usually that clean, spacious middle area, yet it does not distort my focus on time reading. I need to run more research on spiral tacho scale. 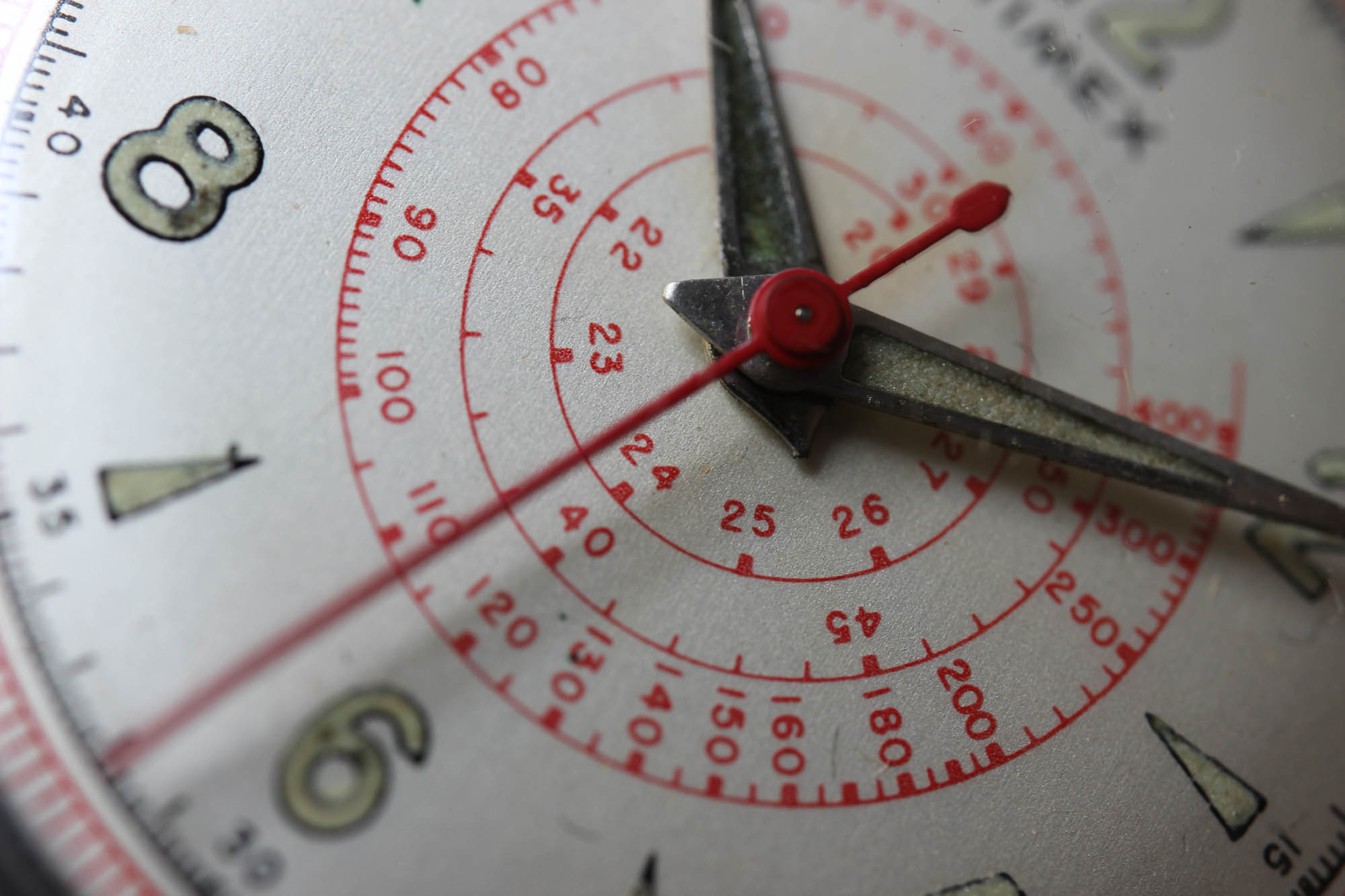 What I never realised until reading the Timex Southampton manual is the fact, that it doesn’t calculate only the speed of moving object over the one-mile stretch. It can also be used to determine the rate of production. If one piece is produced in 180 seconds, production is 20 pieces per hour. 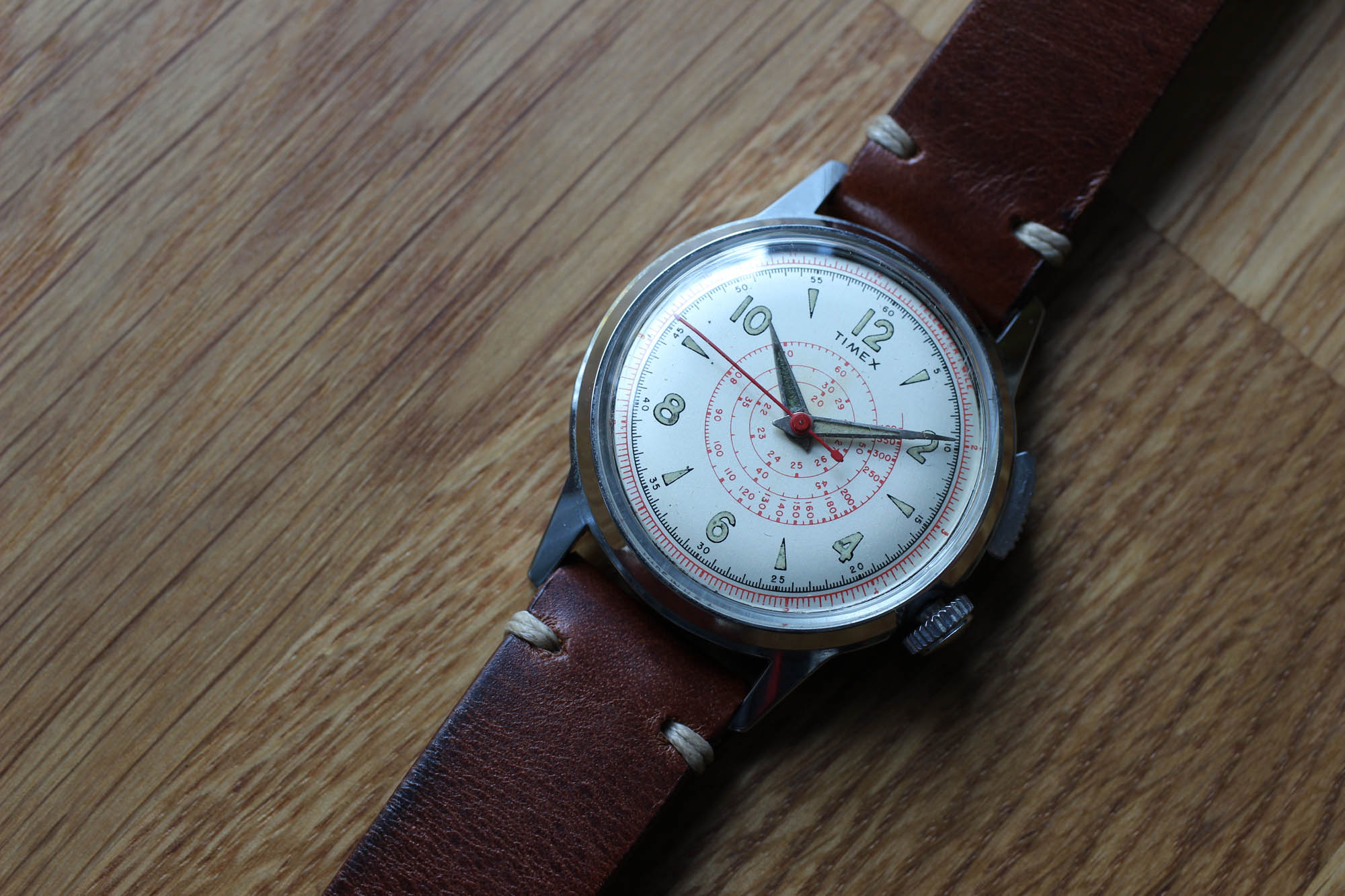 Where the Southampton name comes from is a bit of unknown, we can only guess. Winding this watch is honestly a pain in the ass, at least mine. Same might apply to watch service. Quoting my watchmaker to whom I send all the pictures of watches I happen to find: “I hope I’ll never find this watch on my bench.” The case back is nicely signed. As visible also on the brochure, original Timex Southampton came on a brown padded leather strap. There was also a black dial version of Southampton. Some identical watches in bi-colour option I prefer black – let’s take Angelus Chronodato as an example. Here I think the white dial version is a lucky charmer. 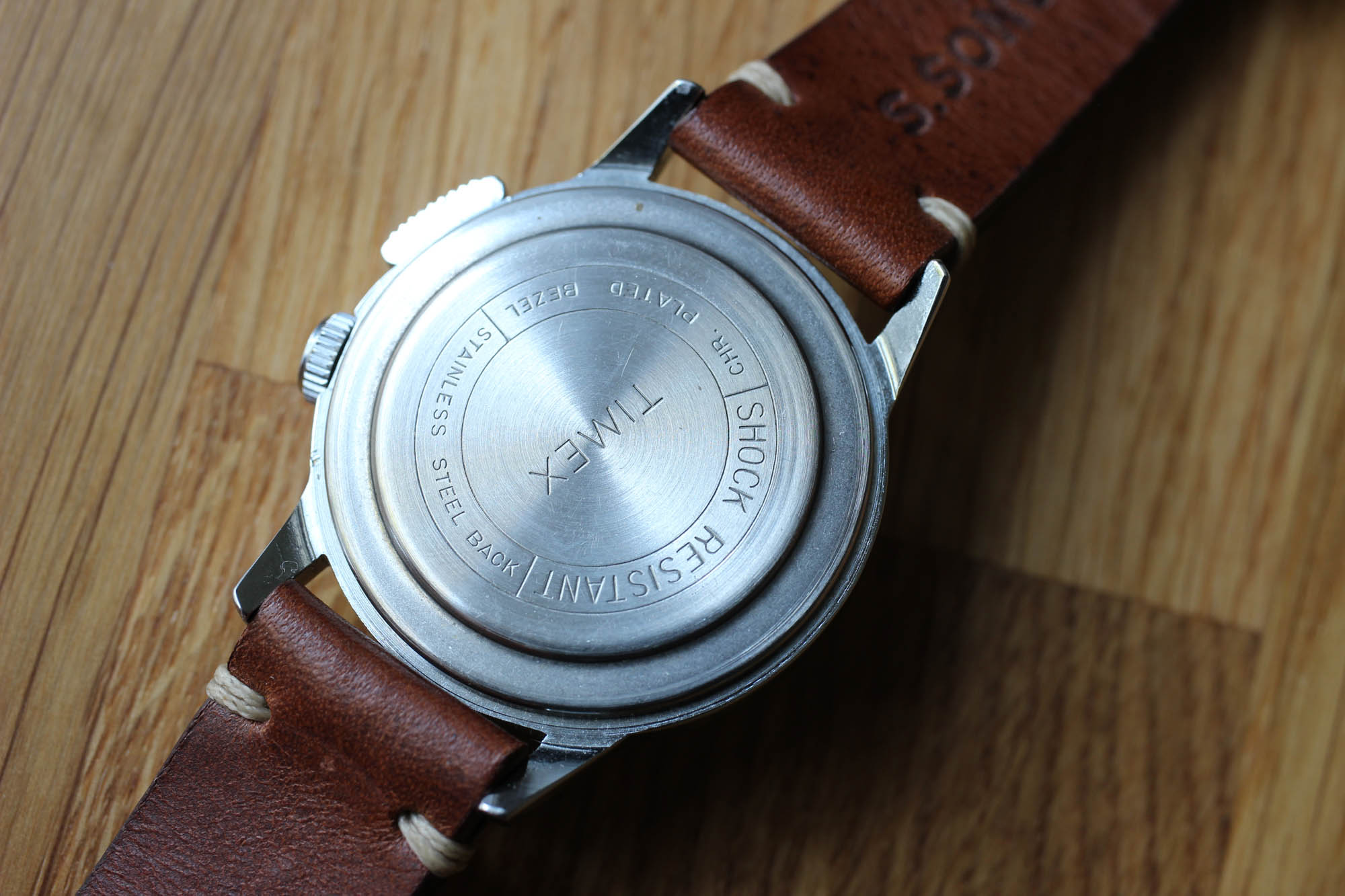 If you value your watch collection based on the number of wheels and jewels in the movements, you probably haven’t read until the last paragraph anyway. For the rest of your curious minds, I believe this is one of the exciting species from the legendary American producer, presenting very best of 1950s creativity. If you got lucky, you might find one for 100 USD, if craving for the well-preserved piece, it easily might demand fivefold budget. 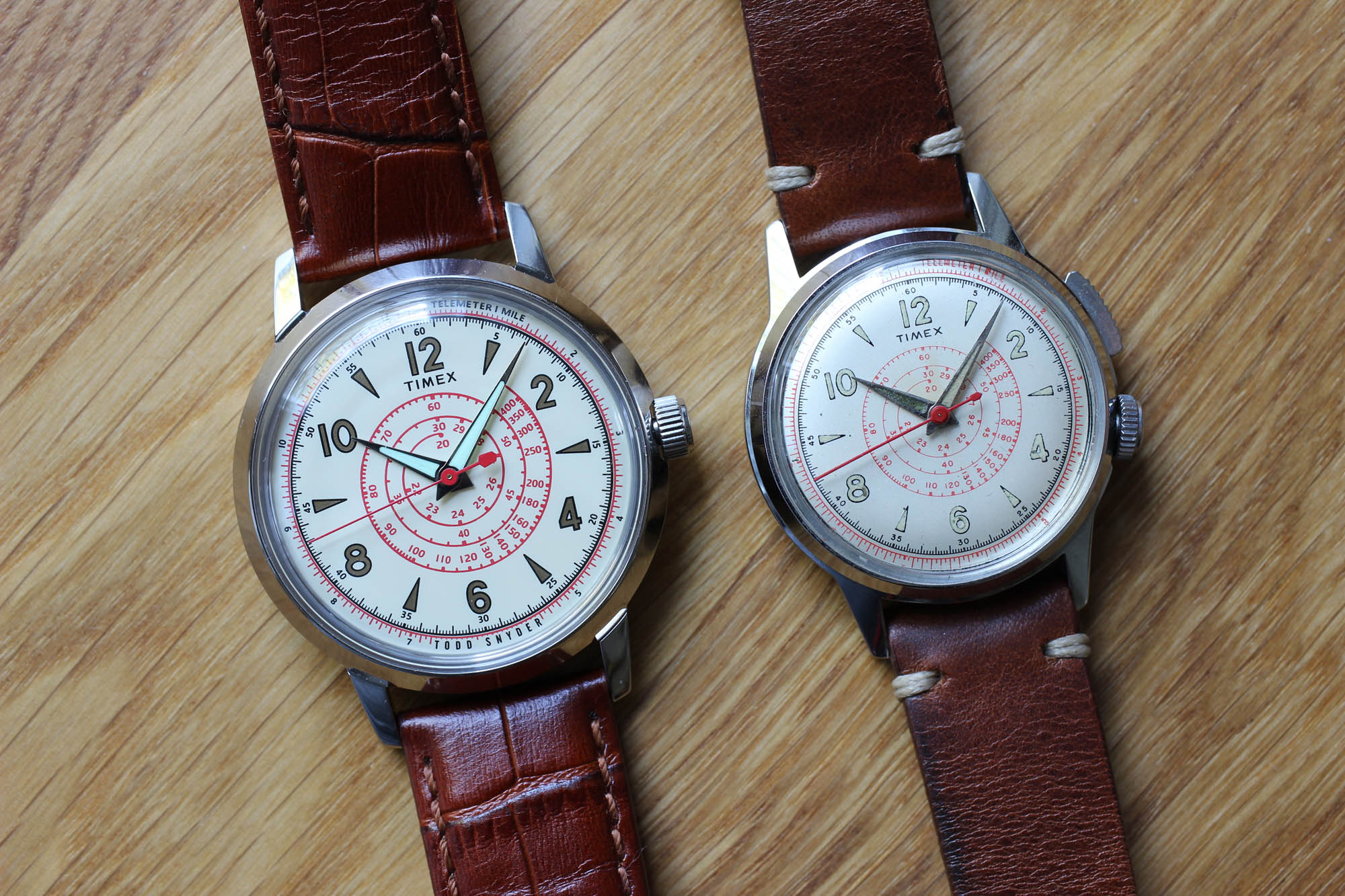 If we had that chance as famous Todd Snyder that found Southampton in Timex archives, we might see some other hidden treasures. Todd Snyder chose Timex Southampton as an inspiration for last year news, the Beekman model. How close, or how far are the original and 2018 re-issue? Stay tuned with us. We already work on a side-by-side review of Todd Snyder Timex Beekman. 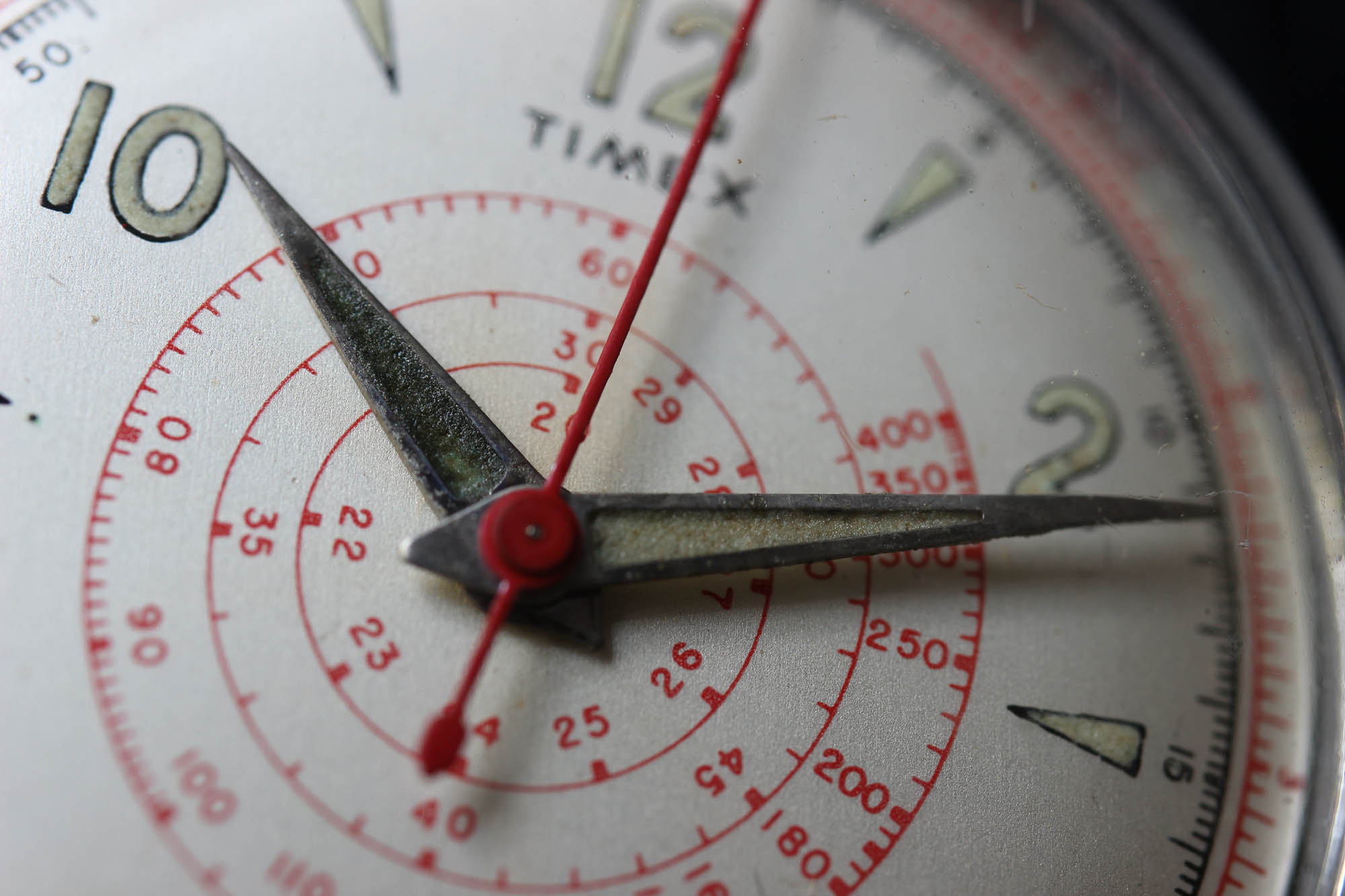 Hot Topics
Laventure Automobile Chronograph With A Proprietary Movement — Marking A Huge Leap Forward For One Of The Industry’s Most Promising Brands
157 comments
We Talk To Swatch Group CEO Nick Hayek About The MoonSwatch
116 comments
Fratello Exclusive: An Inside Look At The MoonSwatch Production Facilities
76 comments
Summer Splash — Semi-Final 1: Thor’s Doxa SUB 300 Divingstar Vs. Jorg’s Tudor Pelagos FXD
61 comments
Rolex Prices In The Current Day — What Generation Of Rolex Models Is The Smartest Buy?
44 comments
Popular
Grand Seiko SBGA211 ‘Snowflake’ And Why I Didn’t Buy It
Robert-Jan Broer
22
Two Patek Philippe Nautilus Watches: 3700/1A Versus 5711/1A
Robert-Jan Broer
15
The Omega Seamaster Diver 300M Returns – On The Wrist Of Daniel Craig
Paul Dezentjé
15