URWERK Drops The UR-112 Aggregat Odyssey: A New UFO On The Horizon

When URWERK released the UR-112 at the tail end of 2021, I was predictably in love. It was a completely new member of the URWERK fold, but here we had something totally new, yet still quintessentially URWERK. Now, the Swiss masters of the Avant-Garde have released the second iteration of the UR-112 with the new UR-112 Aggregat Odyssey.

For a brand that has created its identity around futuristic mechanical time-telling sculptures, the UR-112 Aggregat was something I was not expecting. It was so clinical and perfectly executed. There was no hint of the playfulness that we see in some of the brand’s other models, but I liked that. URWERK intended to make a statement, and it had done just that. Now that statement is made, the brand has shown another side of the UR-112’s personality. Where the previous UR-112 Aggregat was a dark and brooding character, the Odyssey is a flash of all things bright and metallic. 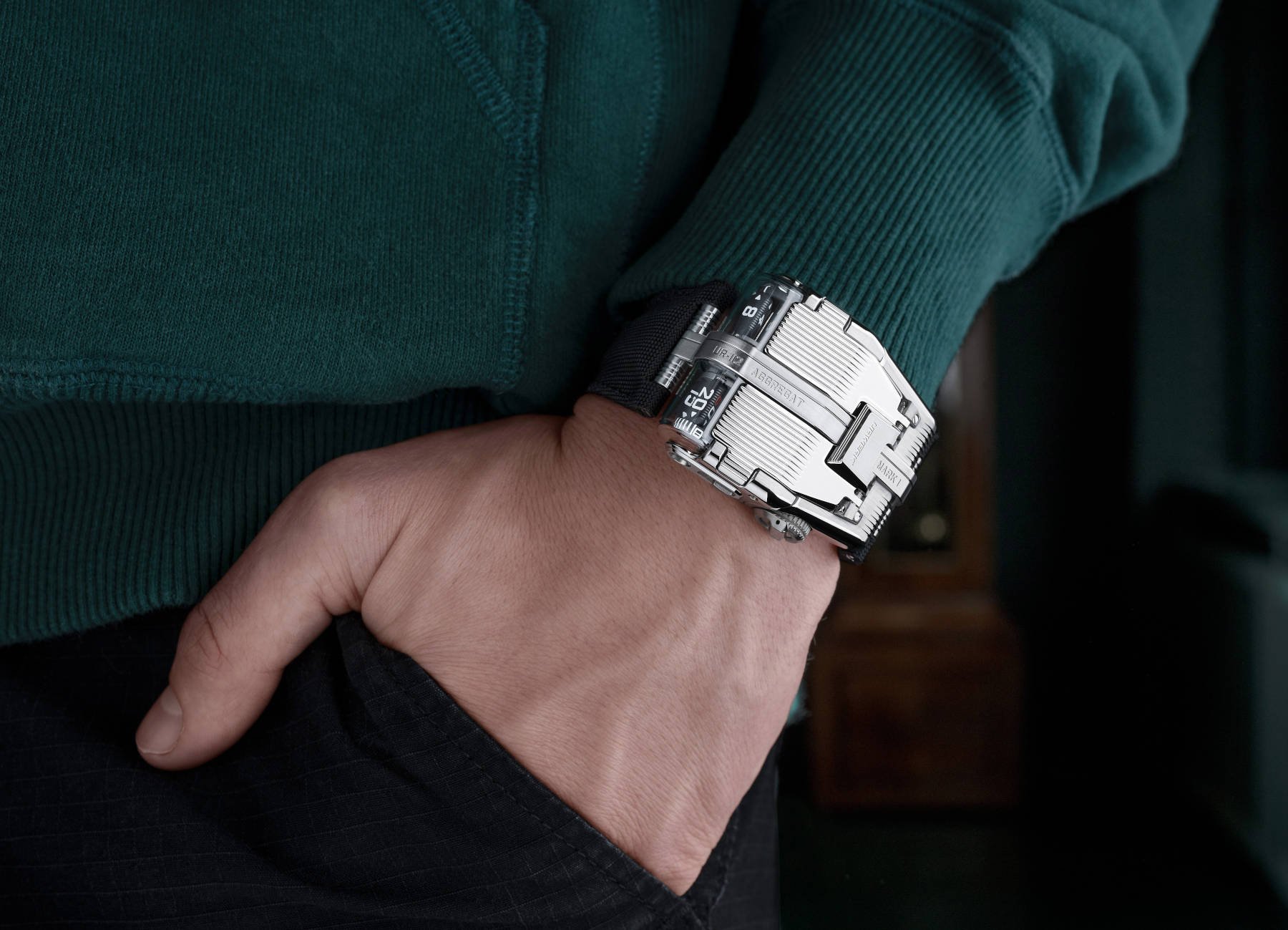 A new UFO in town

When I first saw pictures of the URWERK UR-112 Aggregat Odyssey, I spoke to a colleague who was having similar difficulty interpreting the watch. I use the term difficulty lightly, as the Odyssey’s personality was so starkly different from its predecessor. My colleague described the aesthetic as “50’s electric shavers”. Thankfully I understood what he was trying to say, as I interpreted it similarly, but hopefully articulated slightly better! Vintage futuristic.

Welcome to The Wasteland, Vault-Dweller

It reminded me of one of my all-time favorite video games from the Fallout franchise, Fallout 3. For those not so familiar with the Fallout games, they are set in a post-apocalyptic world. The atompunk retrofuturistic setting is influenced by the post-war culture of the 1950s United States. The game franchise does a wonderful job at playfully exploring ideas of what a dystopian future may have looked like within the style boundaries of that era. How does that translate to the UR-112 Aggregat Odyssey? Where modern ideas of futurism are more industrial with matte and dark finishes, the Odyssey is defined by vintage expectations of our current future. Bright shining polished finishes lead the way among the other brushed and blasted surfaces in a beautiful shower of metal. It’s a glorious retrospective reincarnation of a visionary design.

Despite this quite different aesthetic, the UR-112 Aggregat Odyssey is still clearly a UR-112 at its core. It’s a harmonious member of the UR-112 family. Watchmaking is an art, and true art transcends singular classification. Imagine it this way; the original UR-112 is to the UR-112 Aggregat Odyssey what the minor key is to the major key in classical music. A complementary and harmonious opposite. Yin and Yang. Hot and cold. Yes and no. 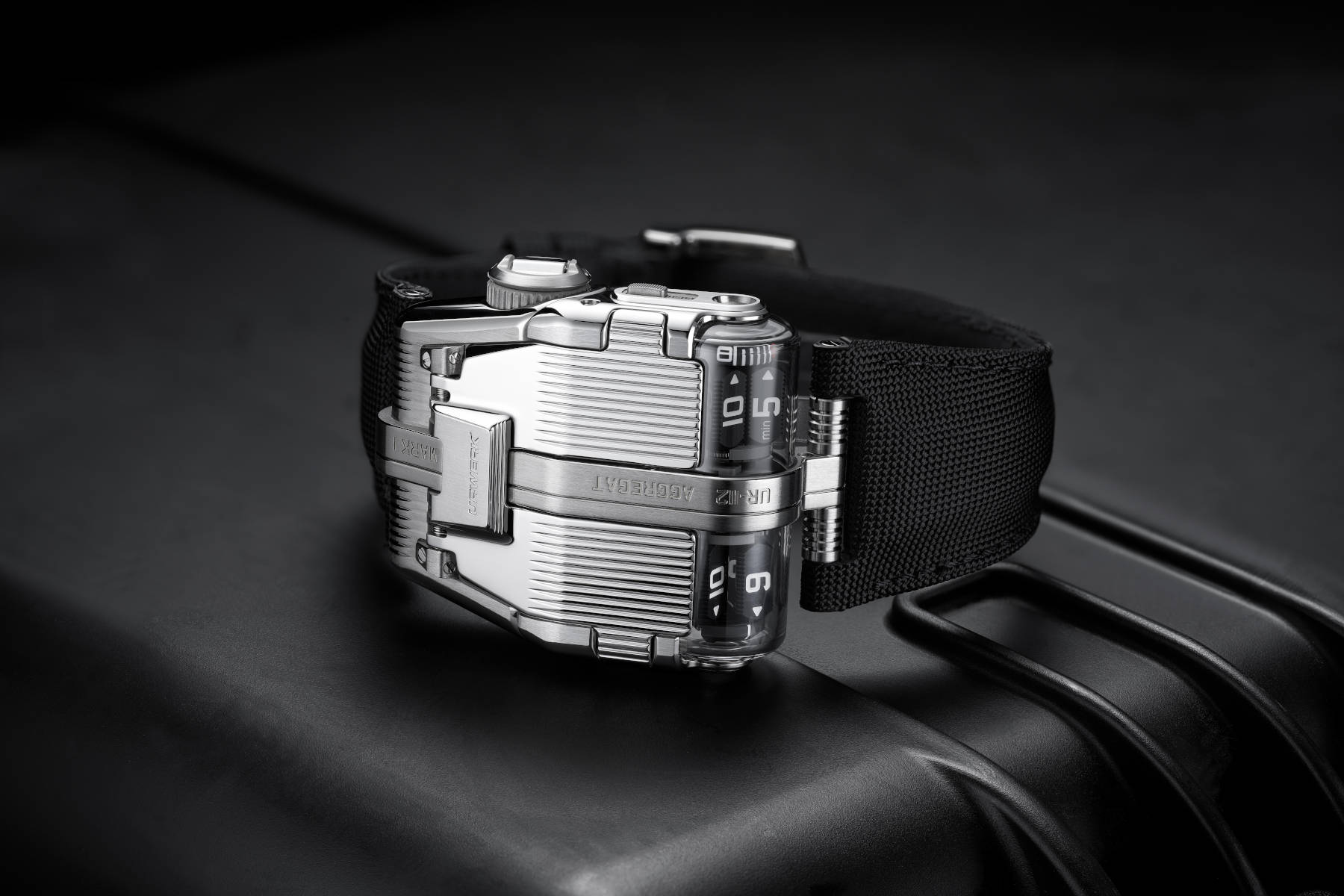 So what are the fundamental changes? Where the original Aggregat was a titanium beast, the UR-112 Aggregat Odyssey uses both steel and titanium in its construction. As mentioned, the range of finishes is different, too, with the black and gunmetal PVD coatings eschewed in favor of the natural color of the metals. Aside from that, there are no real changes to the guts and spirit of the watch. Then again, why would there be? The intricate and technically impressive mechanized digital movement took so long to perfect that it needs no changes. 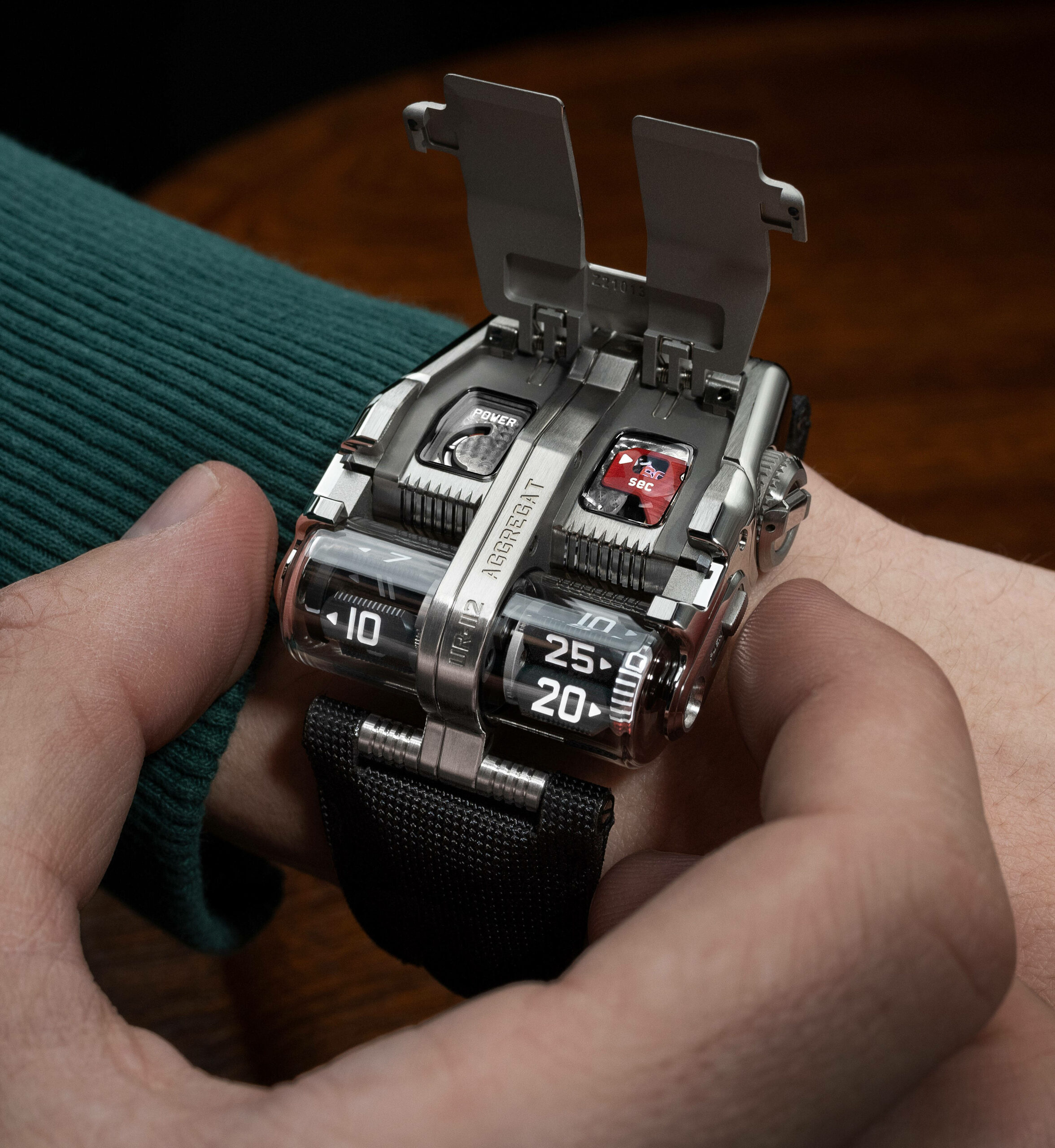 The caliber UR-13.01: three years in the making

URWERK separates its automatic caliber UR-13.01 into two distinct sections, the head, and the body. The body of the movement sits inside a hunter-style case with a hinged hull. By pressing the twin pushers on either side of the case, the hull opens to reveal an analog power reserve (the only analog display on the entire watch) and an elaborate digital seconds counter. We find the hour and minute indicators at the head, connected to the body through a Cardan shaft. A complex set of gearing allows this axis to transmit all the energy required from the mainspring in the body to the display in the head.

The hours and minute counters use revolving triangular prisms made of blackened aluminum attached to flying carousels to tell the time digitally. URWERK achieves this through jumping increments. The numerals on each of the eight triangular prisms are engraved and filled with Super-LumiNova. Interestingly, the operation of the jumping hours display is driven by the advance of the minutes. At the 60th minute, the force accumulated during the previous 3600 seconds releases to change the time to the next hour. 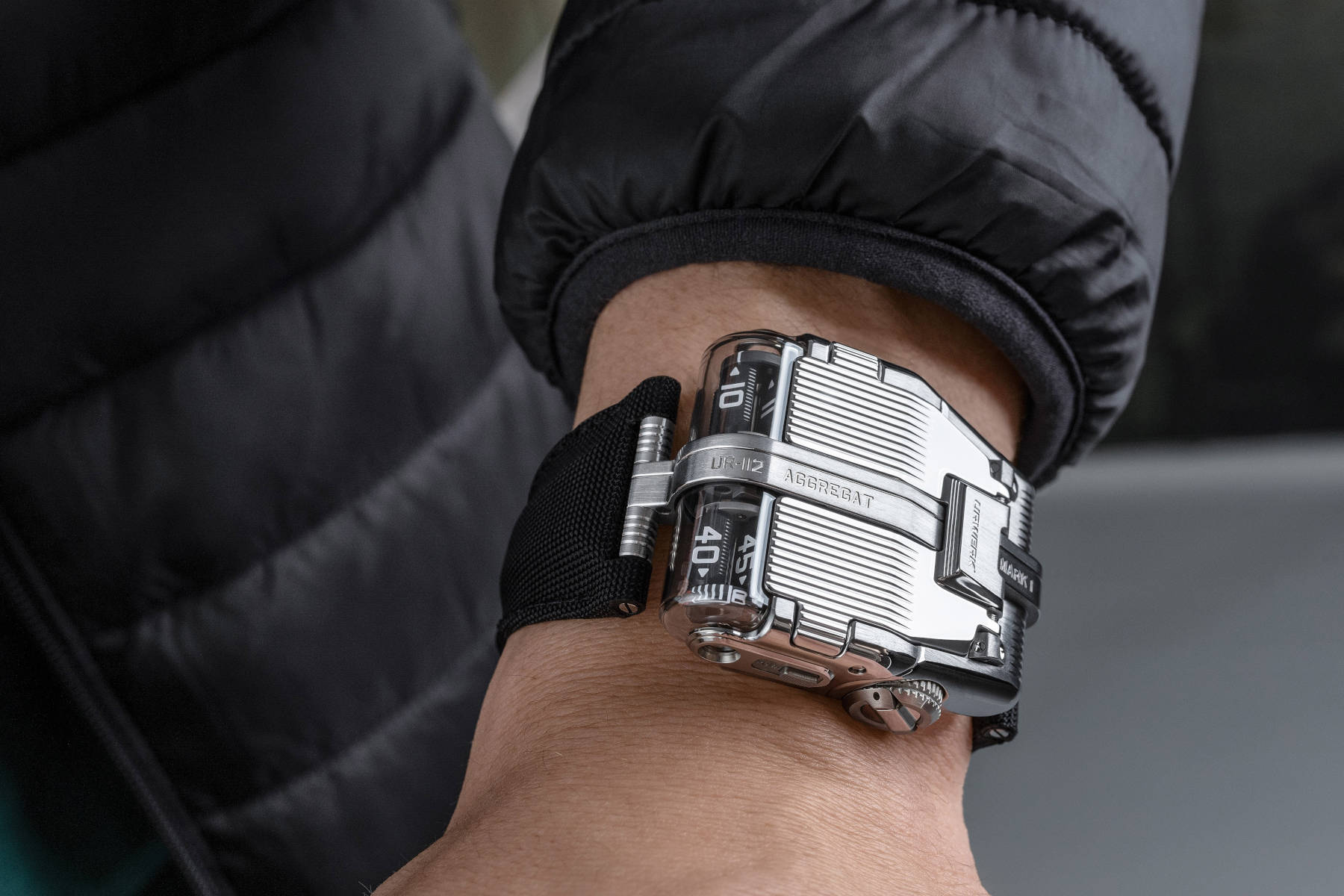 Of the three-year design process it took to design and build the first UR-112 Aggregat, URWERK co-founder Martin Frei said: “Once again, we have let our guts speak for us in making a spaceship, a UFO that is a technical challenge. This UR-112 is pure madness in terms of the mechanics and the finishes. We will only be able to make a very limited number, and there may be just five of them, but this is sheer unadulterated watchmaking pleasure!” 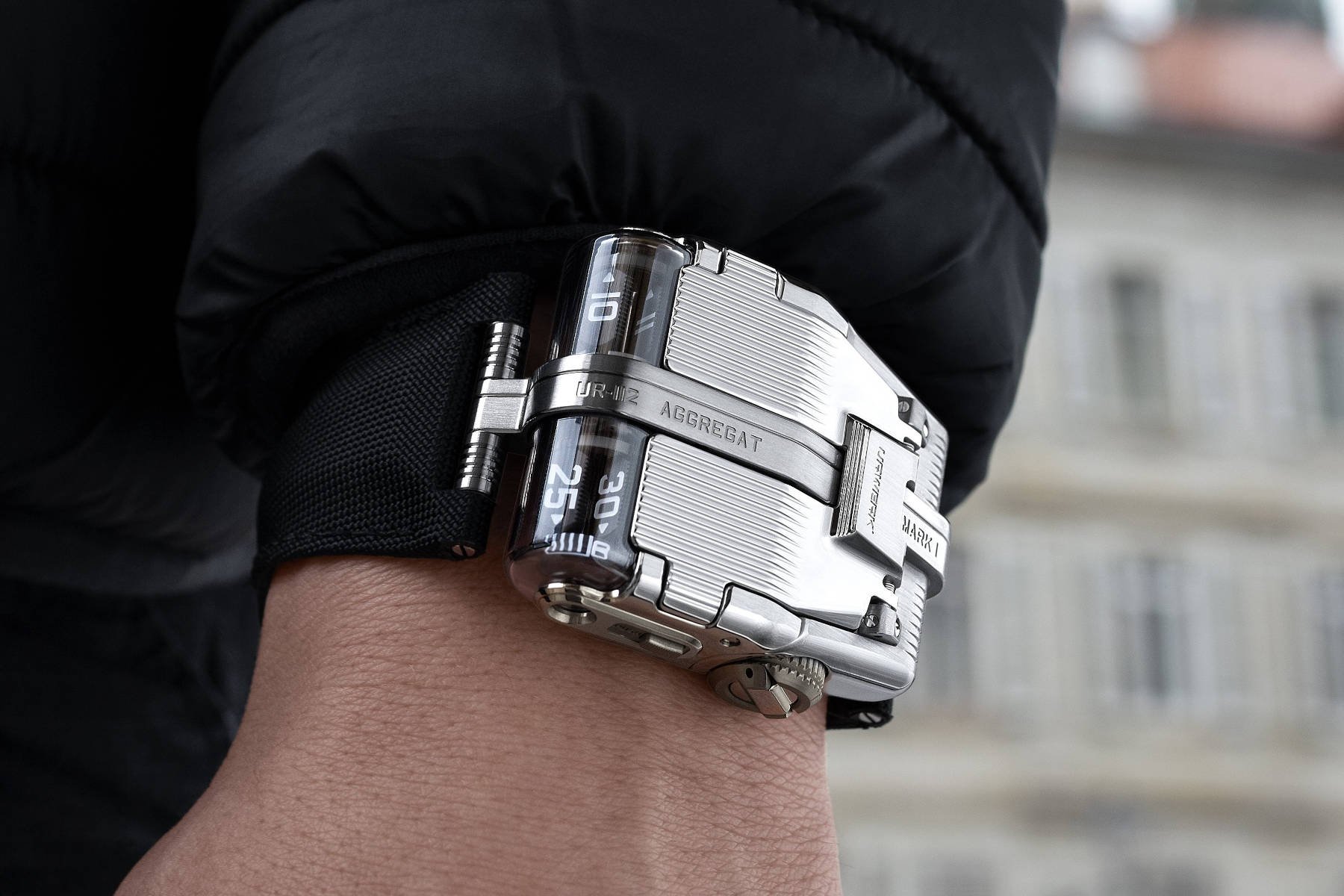 The UR-112 Aggregat Odyssey adapts to its new personality

With the UR-112 Aggregat Odyssey, URWERK shows us once again how it can reimagine and deliver very different characters on very distinct canvases. It’s hard to imagine the brand’s watches being as versatile as they are. But here we are, presented with yet another perfect example. Watches are different beings to each of us. Here I see a nostalgic connection to video games in my younger years. Watchmaking should always make you feel something, no matter how personal or obscure. Mission accomplished!

The limited-edition URWERK UR-112 Aggregat Odyssey is available now. The exact quantity available is not specified at this time. Price: CHF 250,000 (excluding taxes). You can find out more on the official URWERK website.