We spend a lot of time talking about the Bvlgari Octo Finissimo on Fratello. Quite frankly, it’s because we love that line dearly. But the Octo Roma line has a lot to offer also. In fact, while the Finissimo is truly groundbreaking, for some people, its incredible thinness can be a bit too much. The Octo Roma has that same Roman flair, but with a bit more muscle backing it up. Let’s take a closer look at the WorldTimer version today.

It isn’t uncommon for a brand to labor away for years and years in the shadows, doing all the right things and getting none of the credit it deserves. Oftentimes, it takes one moment, one seminal release to make the watch-loving crowd sit up and pay attention. For Bvlgari, that release turned out to be the Finissimo, which heralded a new era of design for the brand. The Octo Roma collection, which was marketed as a “rounder” version of its slimmer brother, hit the shelves in 2017. It took a lot of the know-how gained from the Finissimo experiment and put it into practice in a more, shall we say, traditional fashion. 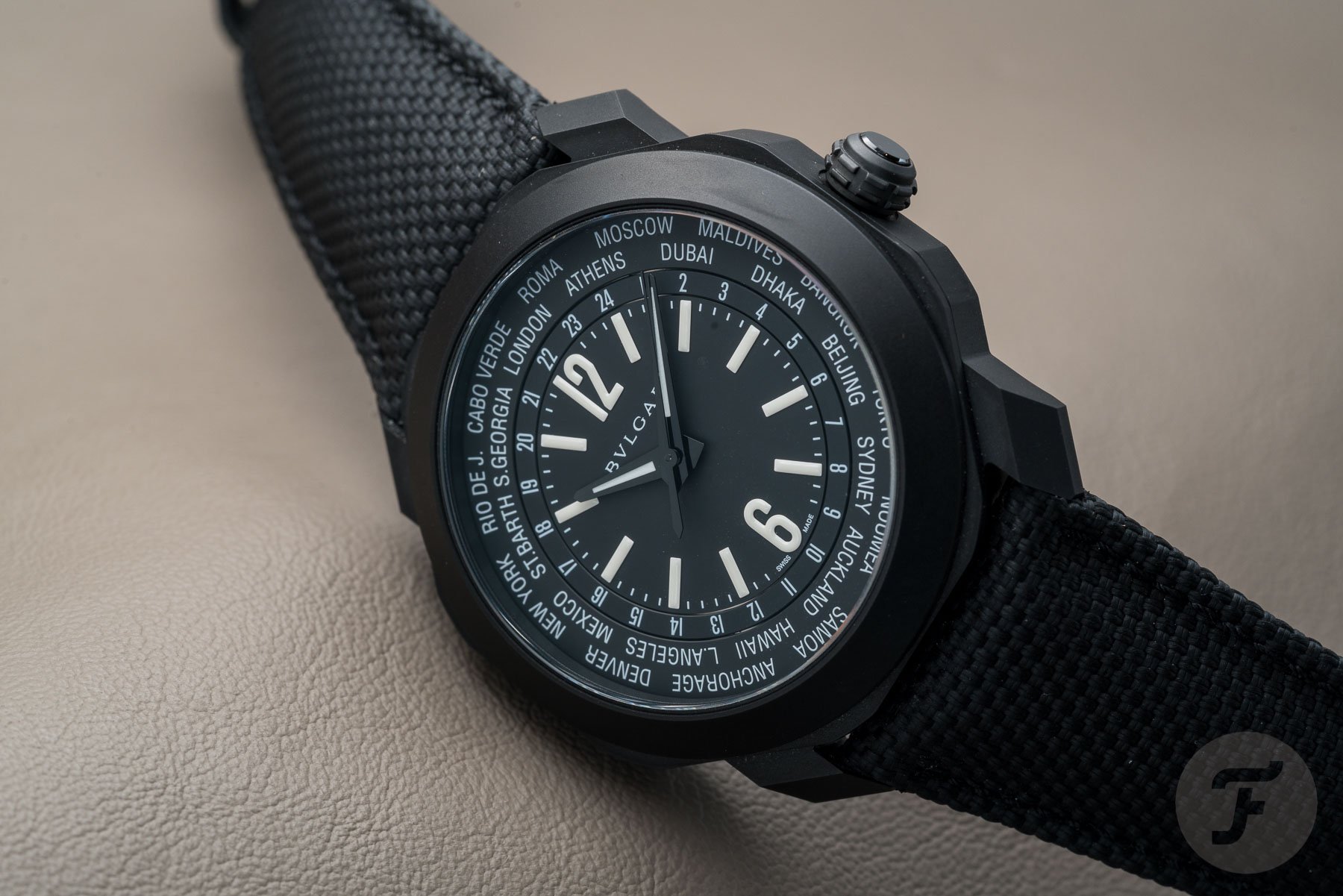 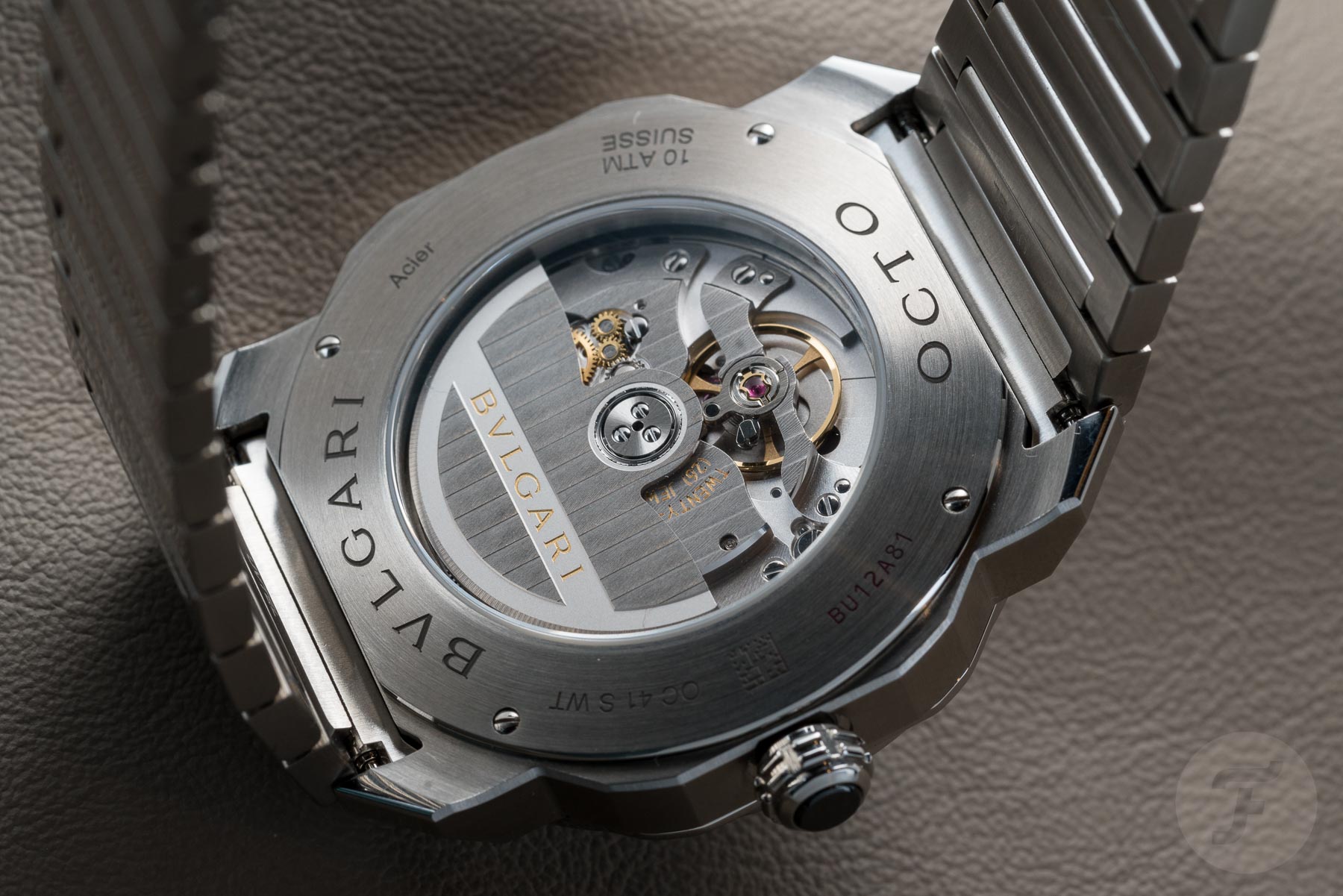 Compared to the movements found in the brand’s more expensive watches, the movement used in the Bvlgari Octo Roma WorldTimer is pretty basic. Nevertheless, it’s by no means uninteresting. The manufacture caliber BVL 257 (based on the BVL 191) has automatic winding, a 28,800vph operating frequency, the ability to display 24 time zones simultaneously, and a 42-hour power reserve. 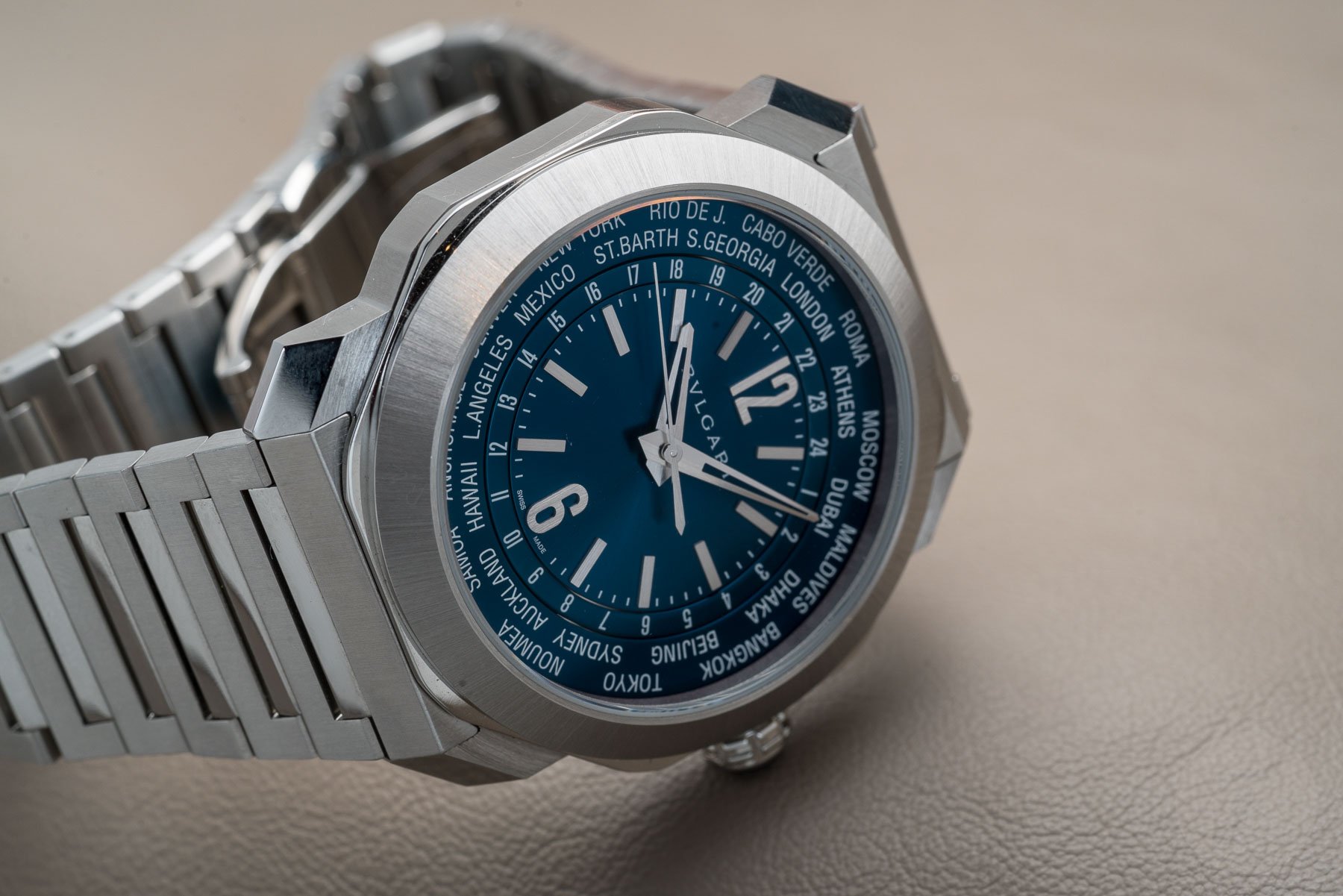 It has a relatively standard movement architecture, but with a full balance bridge for added robustness. There’s also some nicely applied striping, making this movement pleasant to observe through the display case back. However, that’s not why we came to this party. The real treat is the dial side of this model, regardless of whichever color you choose. 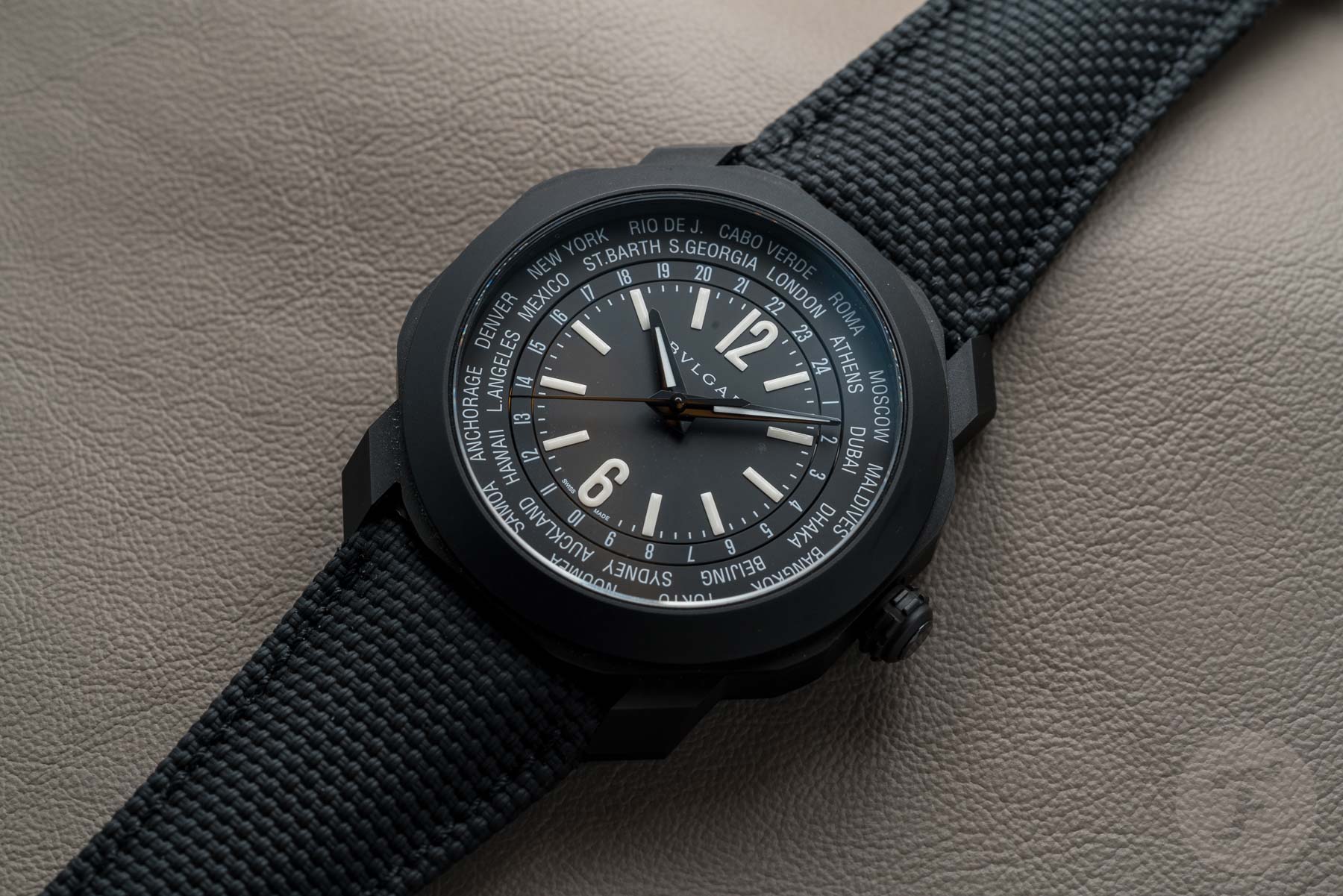 The dial displays 24 timezones simultaneously. Your chosen “home city” can be oriented at the top of the dial, and then the hour and minute hands can be set normally. Sandwiched between the city ring and the center portion of the dial is the 24-hour ring. It is linked to the time-telling mechanism, and thus, it always displays the time in your chosen home city. Worldtimers are, in my opinion, better suited to tracking foreign timezones from your homestead rather than actually traveling in some ways. It’s simple enough to change the “home city” if you wish to while you’re abroad, but the absence of a separate GMT hand means the set-up is marginally more laborious. 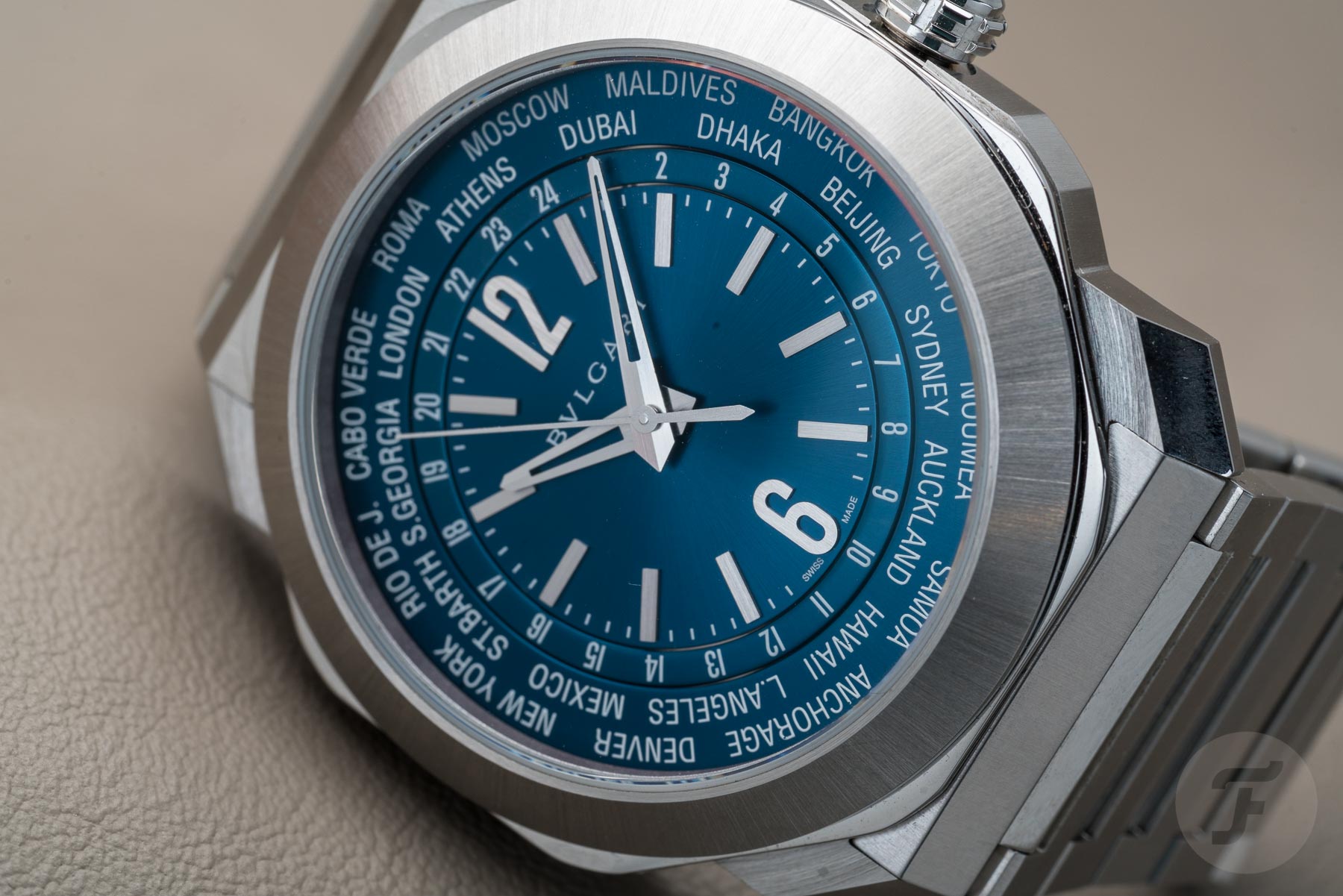 Where does it fit?

Honestly, it seems hard to imagine a more seamless release. This model (in both colorways) seems like it has been around for eternity. While it certainly isn’t the most shocking of novelties, it is exactly the kind of sensitive development I look for and expect from brands trying to build their standing. So which would I choose out of the black and the blue? 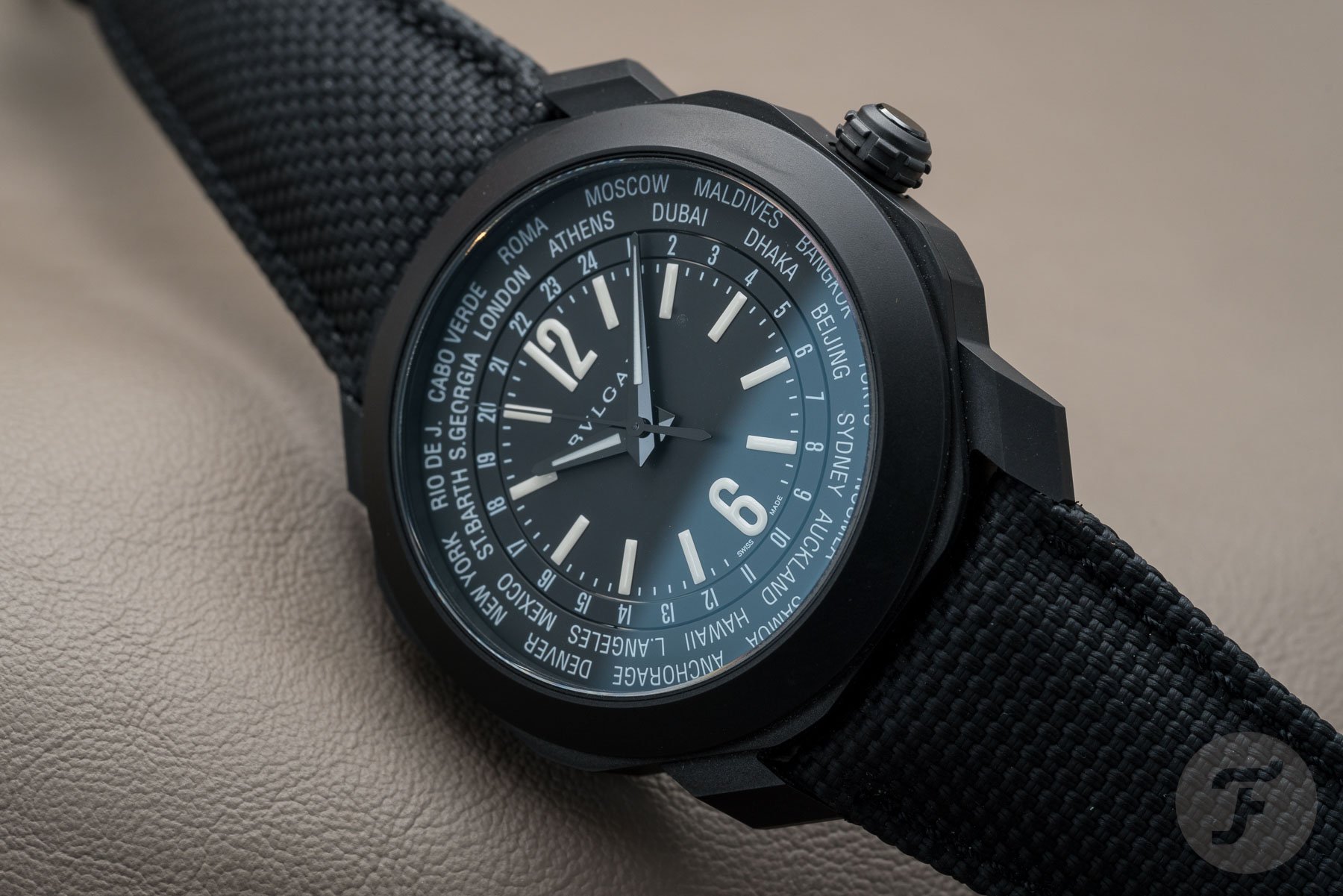 Well, it’s a tough one. Initially, I said the blue dial was my preference, but having spent a lot more time with them now, I feel my opinion might be shifting.

The crisp, blasted finishing of the black model makes all the difference, especially on the “under bezel”. It is matte on the DLC version with sharp edges that align with the case middle, but it’s polished to utter distraction on the plain steel version. This is a big tipping point for the black model, in my view. Also, as beautifully designed and executed as the steel bracelet is, and as pleasant of a drape around the wrist as it has, the lightness and breeziness of the DLC model on the wrist make it the take-home choice for me in the end. Learn more about Bvlgari here.