Before we take a look at the panda I would like to start of with an announcement. Last months I received a lot of questions about prints of the artworks presented in the Watches & Pencils feature. Unfortunately I wasn’t able to handle all the individual requests and therefore I decided to open an online shop. In the shop I’ve placed a selection of my artwork, which will be updated now and then. Since the payment, printing process and shipping is handled by a professional third party with quality products (RedBubble), buying a print should be a breeze from now on (several materials and sizes available). Please take a look around at the Watches & Pencils shop.

Today we discuss a topic which was on my Watches & Pencils bucket-list for quite some time. But to prevent an overload on animal related nicknames I decided to spread this kind of episodes a bit. You could even say that Watches & Pencils has its own animal-category (e.g. the first episode, Wild Bullhead)… Instead of reviewing some remarkable pandas (there are some fantastic articles out on the interwebs) I would love to talk about it on a more analyzed and abstract way.

I’m pretty sure that almost every WIS knows what a panda dial is, but let’s quickly look at my personal definition… 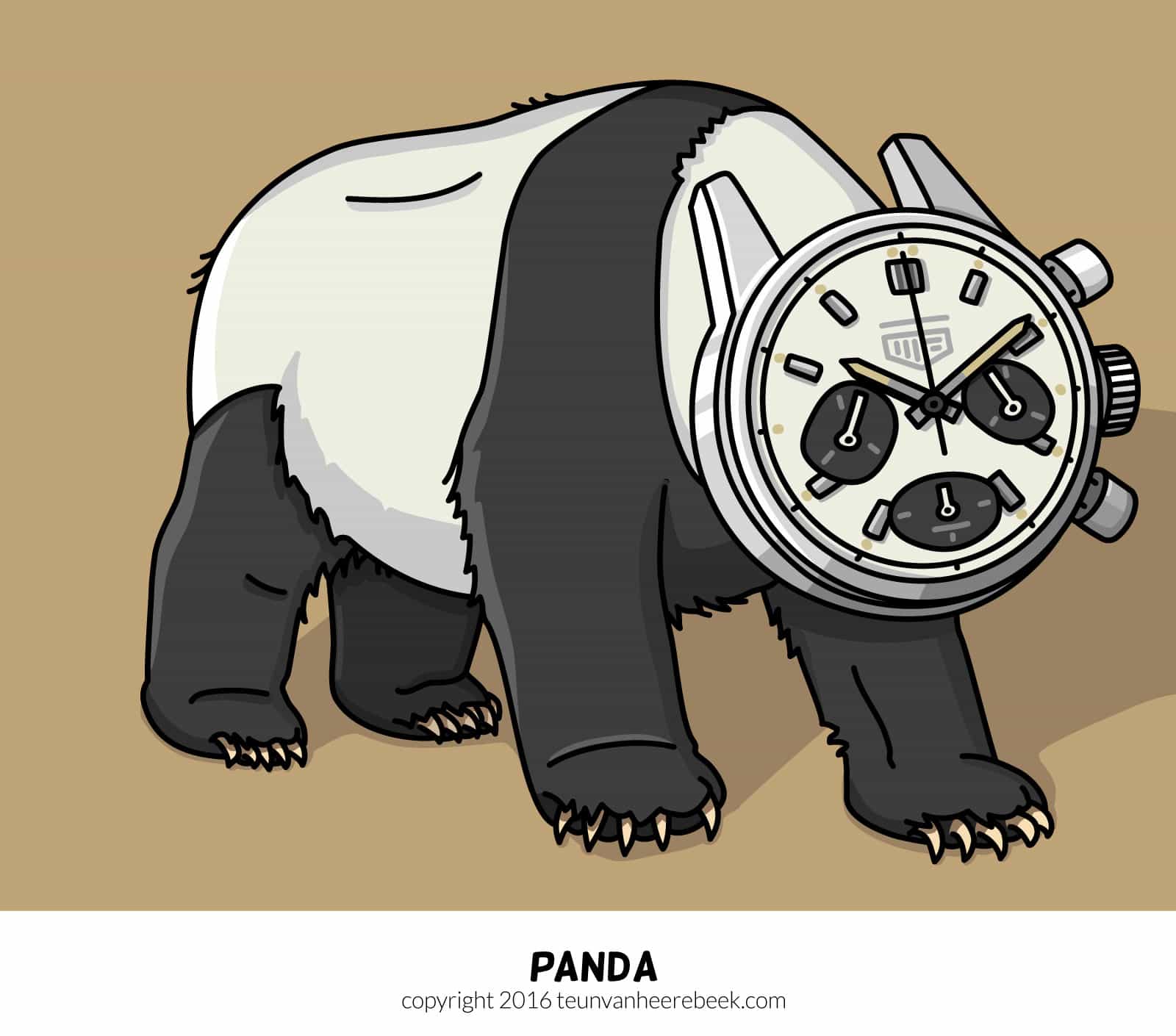 Definition of a Panda Dial

A watch with a light colored dial and sub-elements in dark tones on it. The most common ‘panda’ setup is a chronograph with a white dial and three black sub-dials. But there is also a famous variation, called ‘reverse’ panda. A watch can be called a reverse panda when the base-color of the dial is black and the sub-dials are white. Thus, exactly the opposite from a ‘standard’ panda dial. Although a panda is white and black the term is being used quite loosely these days. Setups with dark-blue and cream colored dials are sometimes also being called ‘Panda’. That’s why I mentioned (variable) light and dark colors instead of white and black earlier on. I even encountered some new terms for color and lay-out variations. For example, ‘semi-panda’ for chronographs with contrasting subdials at 6, 9 and 12 like the Tudor Big Block. 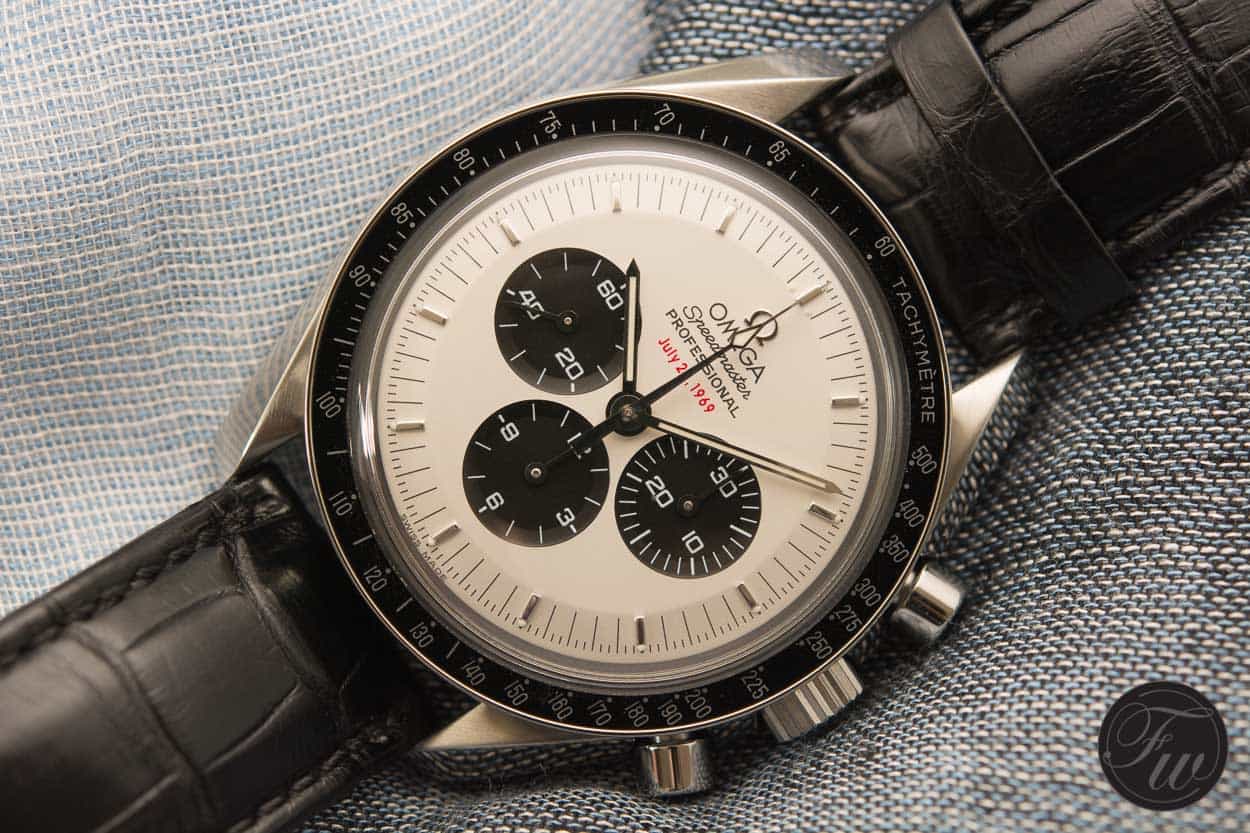 Like many inventions and design statements in the world of watches, the panda concept also originates from the sixties and seventies. Throughout those years the first pandas were born and not without success. Many years later those watches still are popular and very sought after. There are many examples. To name some big shots: Heuer Carrera (reference 2447SN), Rolex Daytona “Paul Newman” (reference 6263) and the Universal Geneve Compax “Nina Rindt” (reference 885103-02). 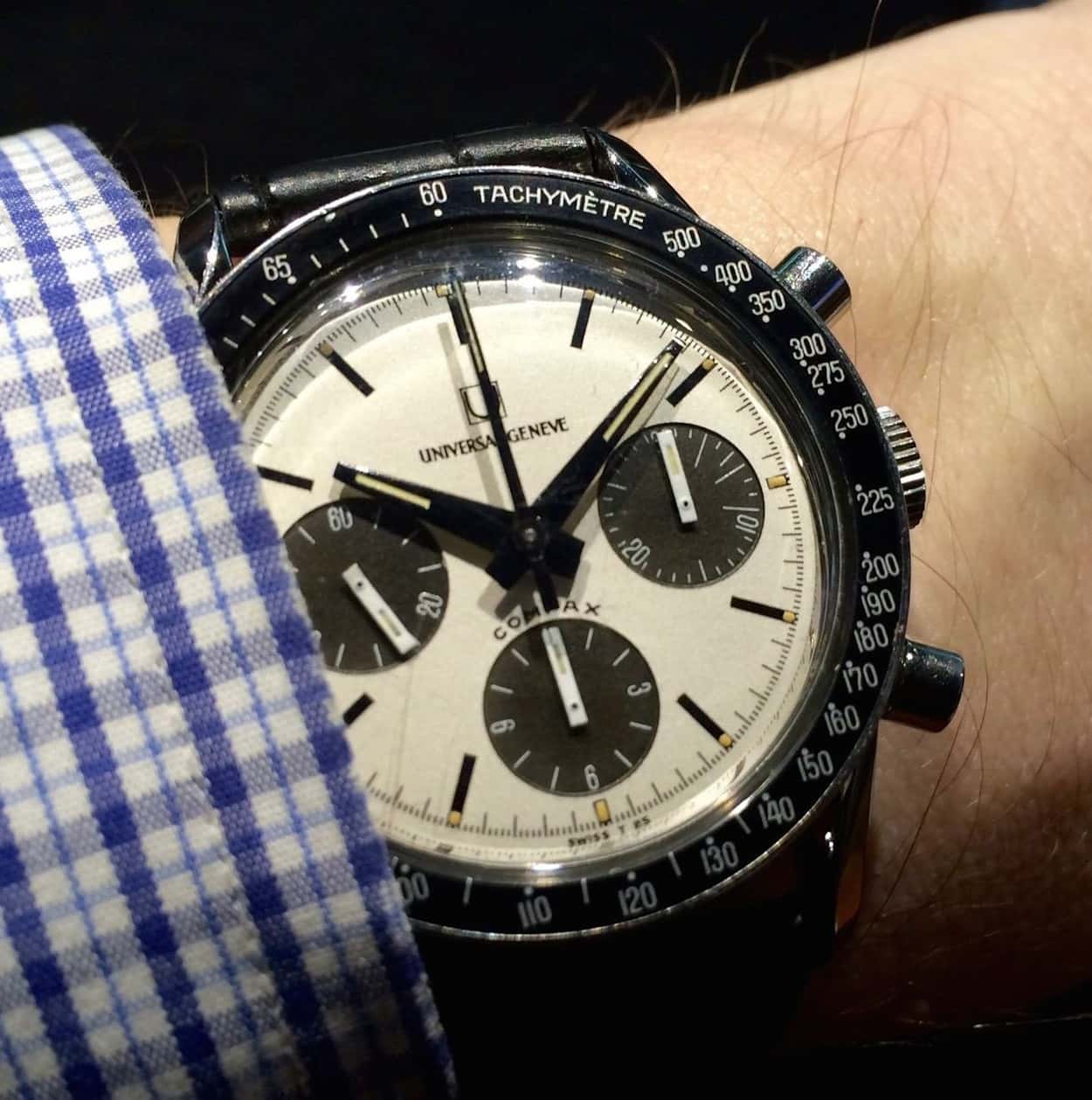 Of course the famous brands and their pandas are quite pricey, but there are still more budget friendly options. Because it is an aesthetic matter, you can find panda dials in every price range and watch brands still have it in their design-toolbelt for upcoming watches. Why is that and what attracts us to these cute animals? 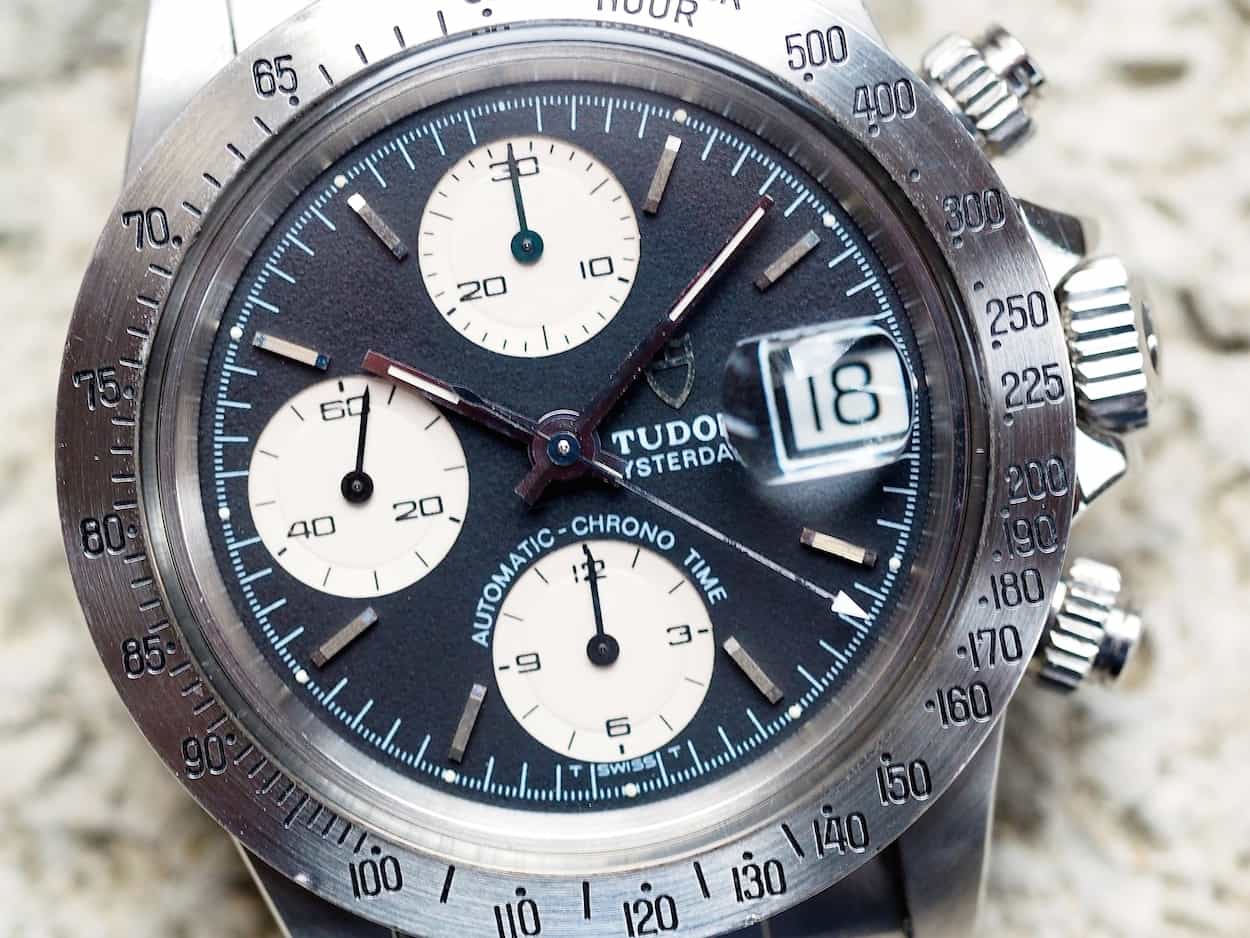 Black and white is the purest contrast possible. Before the 1960’s most of the watches did have a black dial with white numerals or a white dial with black numerals. Whether it was a plain hour-minute-seconds setup or a triple calendar with a moonphase. Why did somebody introduce the panda? What did motivate him/her? I’ve thought of this for a while and came up with a theory.

At that time chronographs were very popular and sometimes it was quite difficult to read the time at a glance with all those registers in the same background color. In some cases, there was obviously a need to create clearer and more separated sections. I think this need, design experiments and tests led to what we now recognize as a panda dial. Let me try to explain my theory which I like to call the ‘island theory’. By defining solid filled sub-zones with the ultimate contrast color you create (more) independent ‘islands’ which are surrounded by a ‘sea’ (dial) in a contrast color. These islands will attract your attention and your eyes will find every section at glance because the boundaries are so well defined by the black|white contrast. Besides this optimized legibility it also looks very balanced and because the setup is so recognizable the panda has find his own spot within the ‘forest’ of dial designs.

Please look at the illustration below and try to look through your eyelashes: 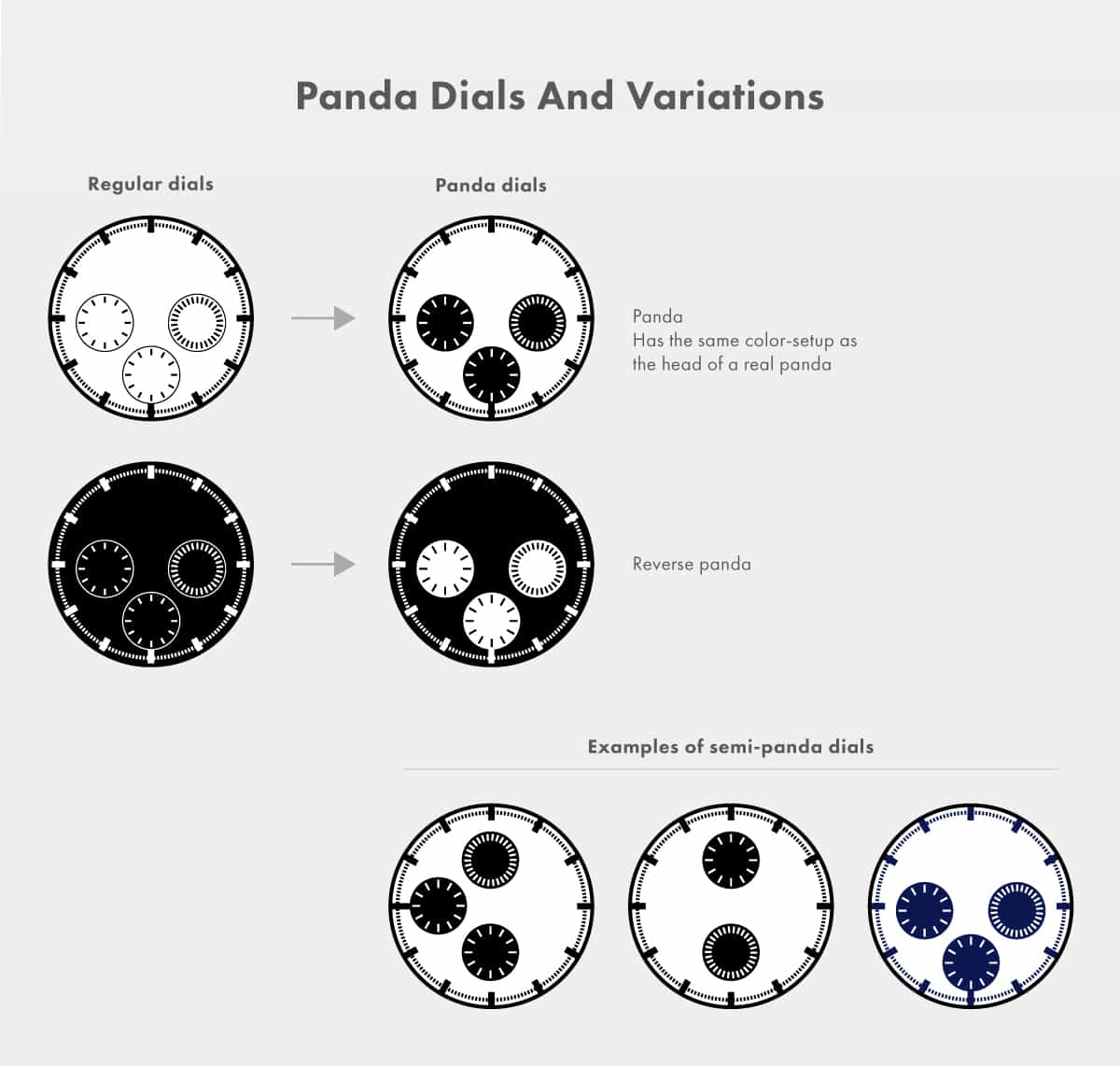 Do you agree that the subdials on the (reverse) Panda setup, the ones with ‘islands’, grab more attention?

White on Black or Black on White

As I mentioned earlier, besides the most common setup, you also have the reverse one. But which one is the most optimal? In other words: what setup delivers the best contrast to read time? Most of the time we focus on the watch itself, but to answer this question I think we also need to look at the environmental colors and light conditions. I could try to explain it in words, but again, please look at the following illustration: 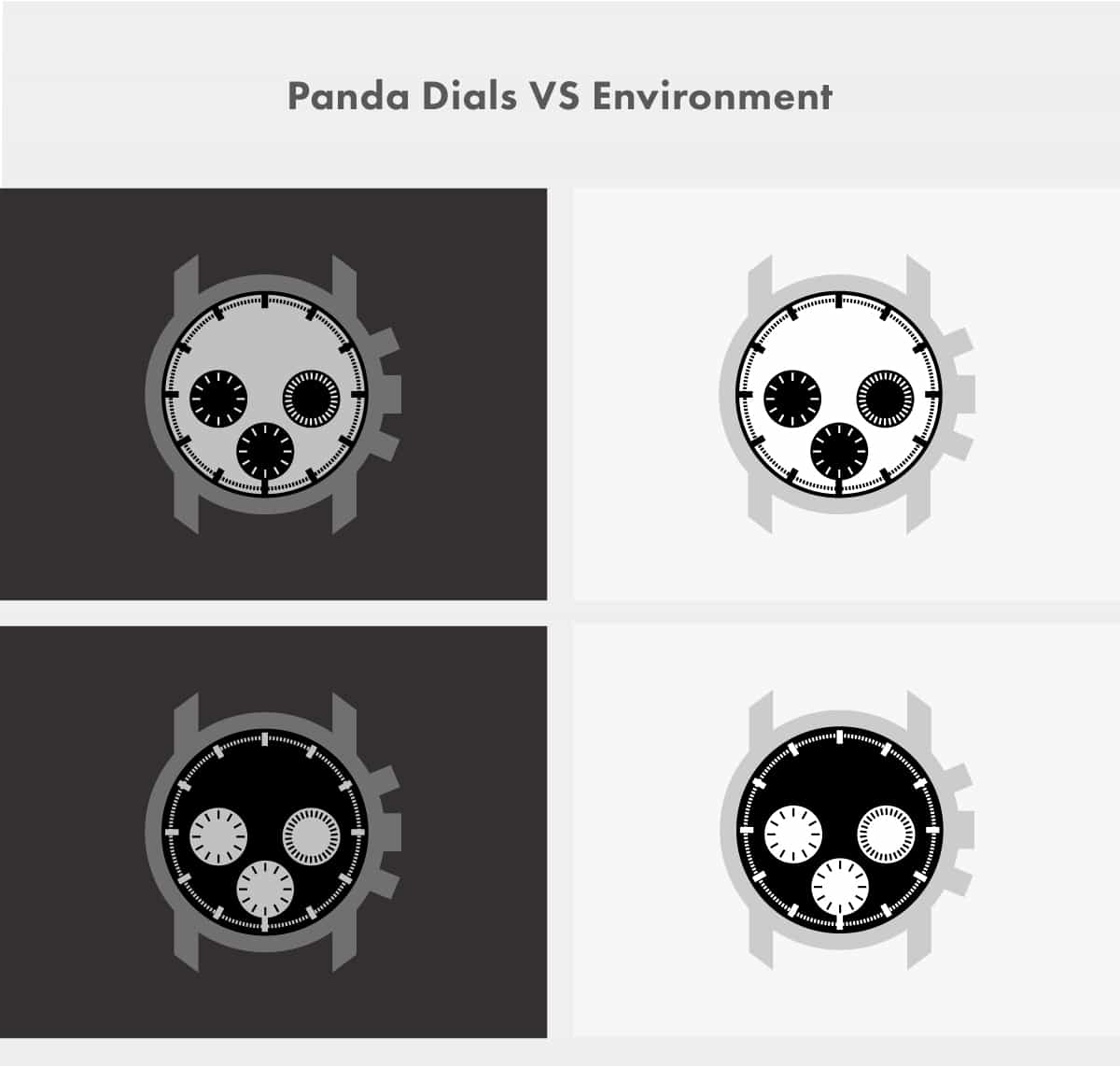 You see? Maybe the reverse panda is even more legible in most conditions. The color black stays the same in almost any condition, while white ‘absorbs the environmental colors more in general. As you can see above I’m talking about non luminous or vintage watches. Otherwise, it would be a different story.

Since I love nicknames I embrace the ‘Panda’. They are a visual spectacle and are very legible in general. The alias helps the watch to become a cult object, which often also translates positively into the price. Although there are some general accepted requisites for a watch to be defined as panda, the edge-cases are more difficult and make the landscape of pandas a bit blurry as long as we call them pandas. But isn’t this discussion together with flexible boundaries what we love about our passion? 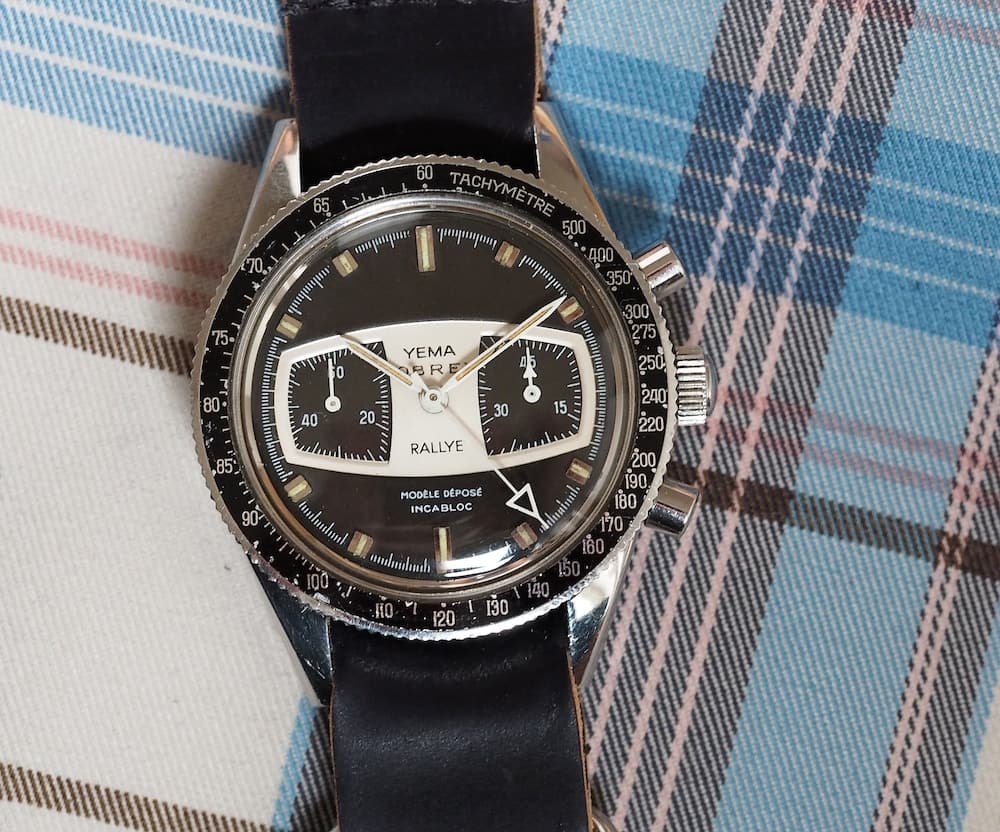 Yema Rallye Chronograph: panda or not?