Would you ring in the New Year with this Cartier for €4,800?
Michael Stockton
comments 26
Share
Wrist Game
Crying Shame

We welcome you back to Wrist Game or Crying Shame with a take on the Cartier Ballon Bleu. Will you take it or leave it? We’ll have to see, but before we get there…

A couple of weeks back, I showed you the JLC Master Control Ultra Thin, and an overwhelming 93% of you did the right thing by awarding that watch a Wrist Game win. Hey, 7%-ers, it’s ok to be flat-out wrong sometimes! This week, with the Cartier Ballon Bleu 36 on deck, we will talk about something decidedly more divisive. It’s just the kind of article that should help blow some time while you wait for New Year’s Eve (seriously, this period between Christmas and NYE just feels like a weird no man’s land). 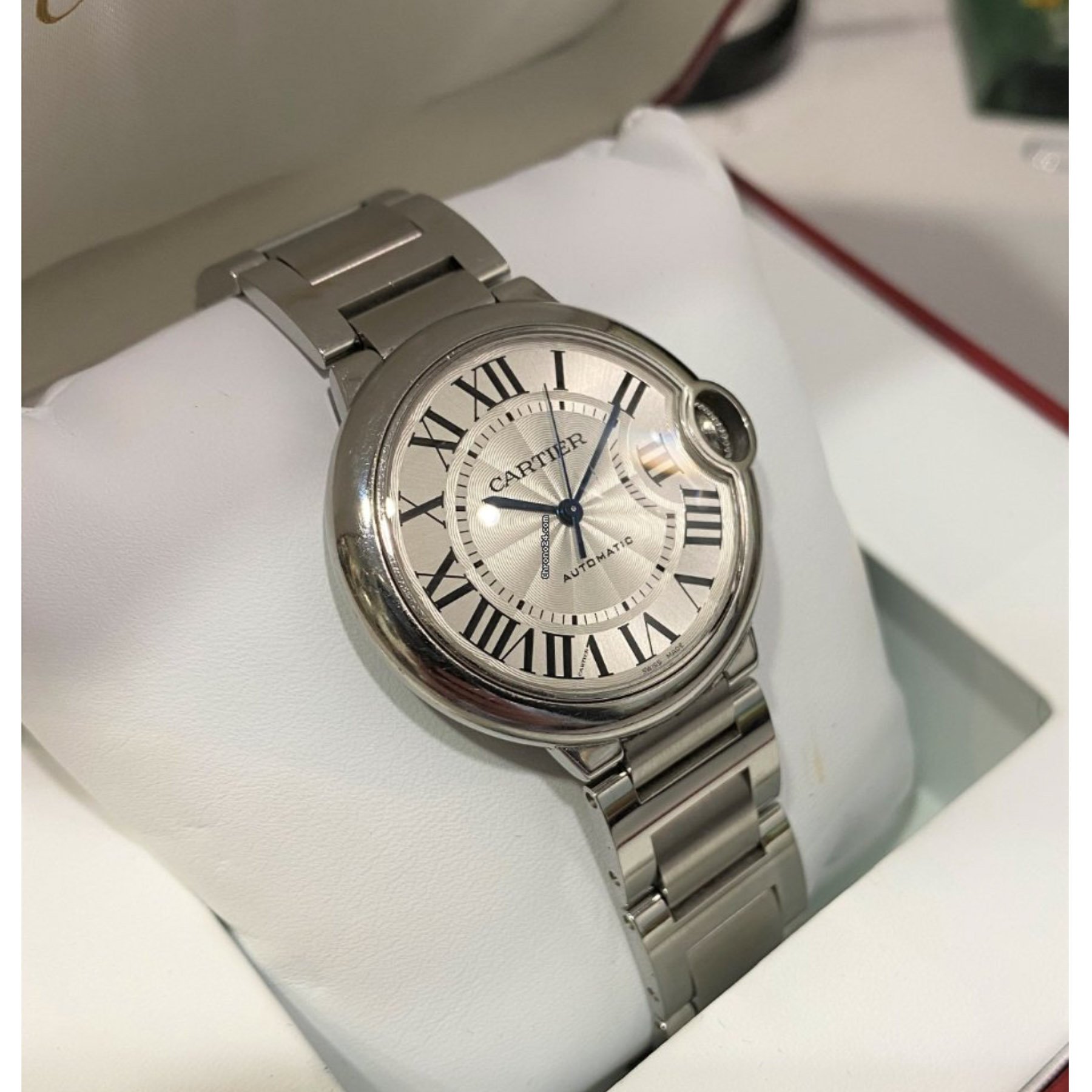 If you haven’t noticed, the last year has been big for Cartier. It seems that Richemont decided to put some financial backing behind the storied brand and, as a result, we were “treated” to all kinds of stories about Cartier in various online magazines. Cartier has always been important and popular, but the marketing machine wanted to push, push, push the history of the Tank, as well as the brand’s watchmaking prowess and whatnot. Seemingly, they were tired of companies like Rolex and Patek getting all the ink. I get it, to a large degree, but force-feeding anything gets a bit tiresome, doesn’t it?

Still, the nonstop bombardment of Cartier resulted in several things — some were even personal. Firstly, Cartier launched its Tank Must, a fun solar-powered version of its iconic watch. Sadly, the hoarders that run rampant in the watch world even made this watch impossible to find. Secondary prices are silly (and so are you if you pay above retail for a solar-powered watch) and many of us have moved on to other topics. Next, it caused me to follow our friend Geo Cramer’s Instagram account more closely — he does sport some beautiful examples from the marque. Finally, it led me to look more at Cartier’s offerings. This, and a certain TV show, led me to the Ballon Bleu. 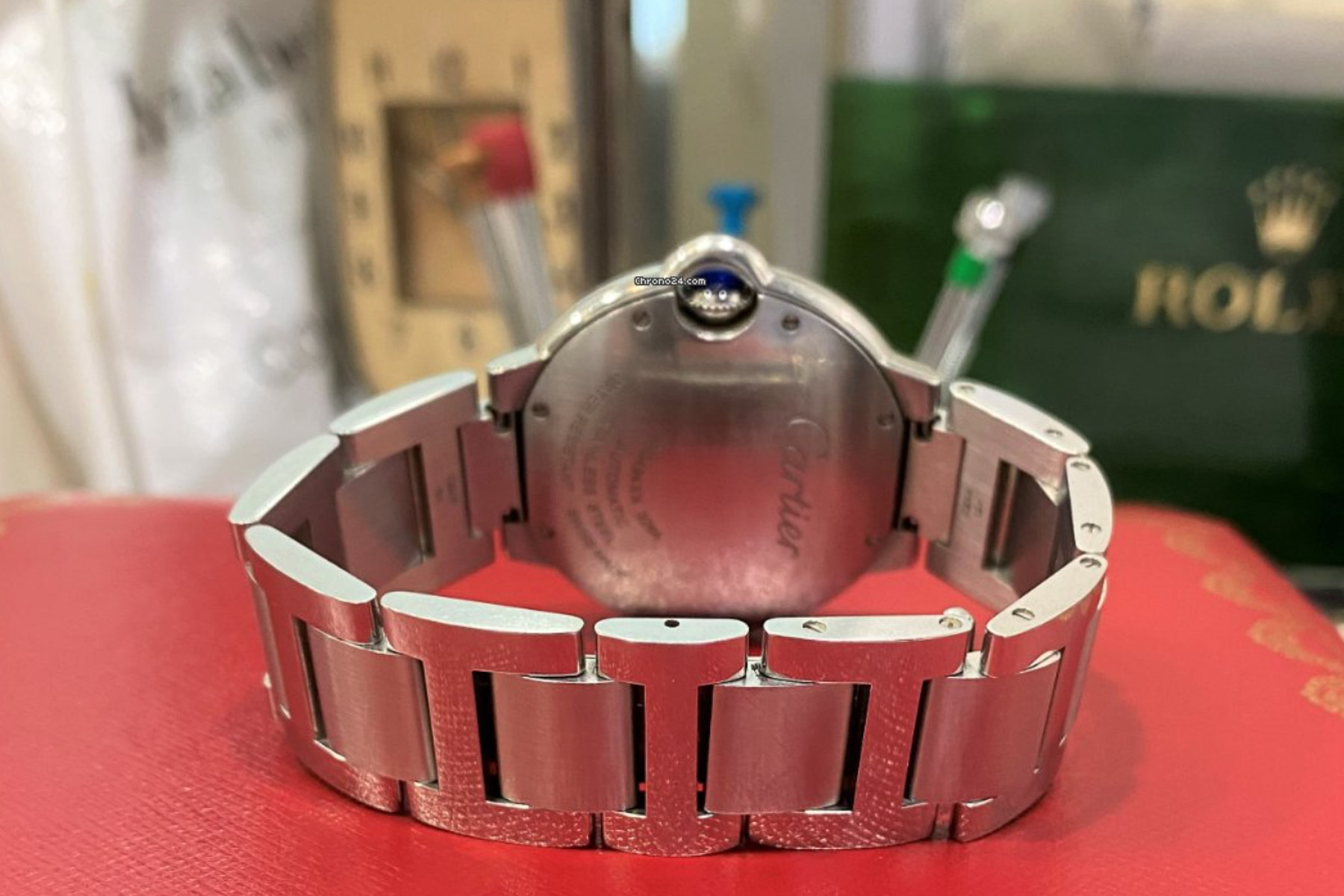 Like just about everyone else on this weird planet, I’ve been watching a fair bit of TV. Recently, we ran through both seasons of The Morning Show. As an aside, I find it to be well-acted with an all-too-real plot — it’s a bit uncomfortable, actually. However, my favorite character on the show, Cory Ellison (played by actor Billy Crudup) caught my eye in one of the later episodes. I noticed that he was wearing an unusual watch. Well, in the beginning, I only saw it from the side. While I thought it was an Oyster bracelet, it was incredibly small. I went to the world of the internet and found out that it was no Rolex. In fact, it was the Cartier Ballon Bleu.

Now, Crudup’s character is, to put it mildly, eccentric. He makes lots of off-the-wall comments, is impulsive, and can be challenging to watch. All of this, incidentally, doesn’t mean that the Cartier Ballon Bleu deserves the same description. What is wild, though, is that apparently, he wears the 33mm variant, which is unexpected for a network CEO. Different strokes for different folks I guess. Regardless, I looked up this watch and decided to focus our attention on the automatic 36mm version because that seems like a good size for just about everyone. 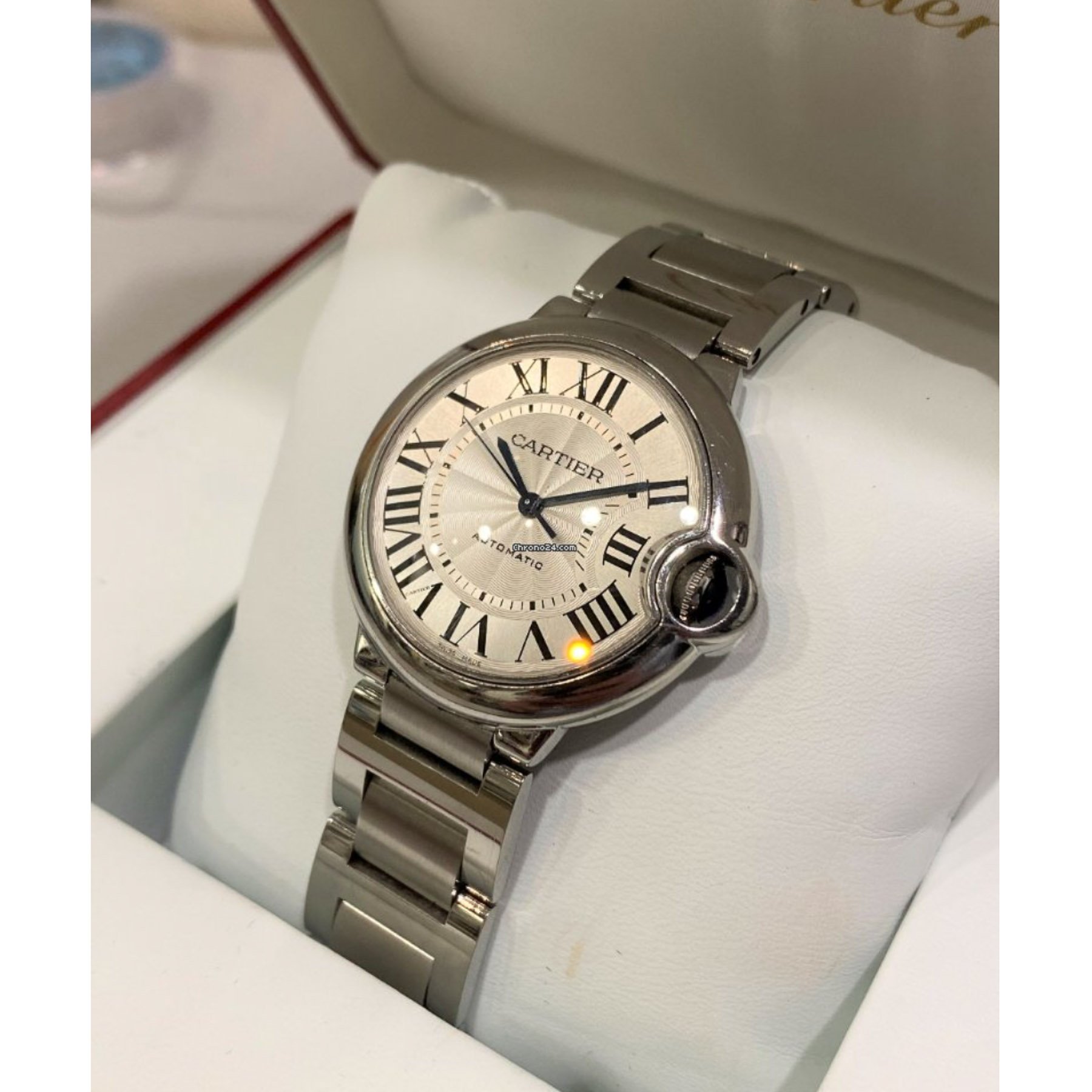 I guess that the Cartier Ballon Bleu has been all around me, and I just never really stopped to take notice. It is, however, a pretty nice and unique-looking watch. Cartier introduced this watch in 2007, and if the internet is to be believed, it’s a brand bestseller. It comes in a number of sizes, beginning with 28mm and going all the way up to 42mm. Gold, diamonds, bracelet, strap, automatic, and quartz — you name it, and Cartier probably has it. “Ballon”, if your French is as good as mine, means “ball” (I guess some of us non-speakers sort of knew that from the World Cup trophy). The watch takes on this look by offering a very round case with an enclosed crown. It’s a bit like a Panerai or even an old Bedat No. 8 in that regard, but it’s done nicely in that fancy Cartier way.

The dial on the Ballon Bleu contains the usual Roman numeral trappings one expects on a Cartier watch. The crown is deeply recessed into the case, causing some whimsical wrapping of the minute track that I quite like. That crown, by the way, is capped with the obligatory blue cabochon. Seriously, without this, the world would probably roll off of its axis. Inside, an automatic movement based on the ETA 2671 beats away. To allow for a bit of freshening up in the washroom after a power lunch, these watches have 30 meters of water resistance. 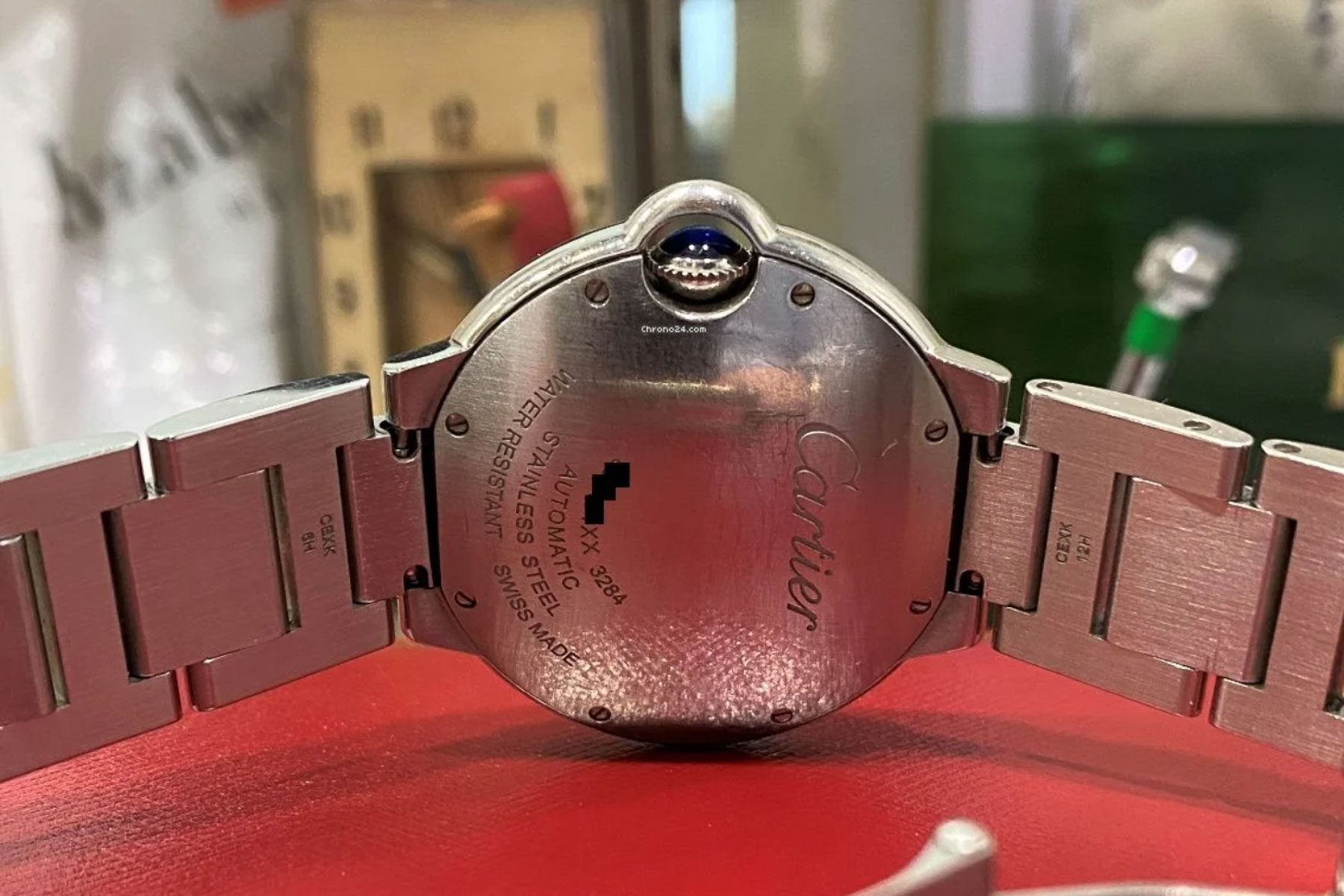 Today’s Cartier Ballon Bleu 36 is listed on Chrono24. The seller, The Watch Exchange in Manchester, owns the watch and the photos. Our candidate isn’t the cheapest around, but I chose it because it has a bracelet, is in nice shape, and comes with all of its original kit. At €4,806, it still offers “good value for money” (as my English friends like to say) over the €6,150 retail price here in Germany. Sometimes something as innocuous as a TV show makes one sit up and take notice of a watch. Sometimes, it makes one want to forget a watch! Which side do you fall on with this Cartier?

Hot Topics
RJ’s Top Five Alternatives To The Omega Speedmaster Professional
94 comments
The Top Five Alternatives To The Rolex Datejust
91 comments
We Need Luxury Solar-Powered Quartz Watches From Rolex, Omega, Breitling, And Grand Seiko
70 comments
Above And Beyond: When And Why Paying Over Retail For A Watch Makes Sense
58 comments
My Guilty Pleasure Watch: The Chanel J12 Marine
48 comments
Popular
Rolex GMT-Master History And Overview Of All Major References
Robert-Jan Broer
15
10 Tips For Better Watch Photography
Bert Buijsrogge
11
Oris Classic Date Or Save Up For an Omega De Ville Prestige?
Robert-Jan Broer
11