Are you ready to grow up for €12,690?
Michael Stockton
comments 10
Share
Wrist Game
Crying Shame

Welcome back to Wrist Game or Crying Shame where you can choose whether you’d like a serious watch or not. We’ll find out with today’s Jaeger-LeCoultre Master Control Perpetual Calendar. But first…

Last week I gave you the Seiko 6159-7001 Professional diver for consideration. Even though it carried a stiff price tag, the watch swam away with a 67% Wrist Game win. I was happy to see Seiko get some love in this Swiss-dominated arena. Today, we’ll do a serious 180 with the Jaeger-LeCoultre Master Control Perpetual Calendar. 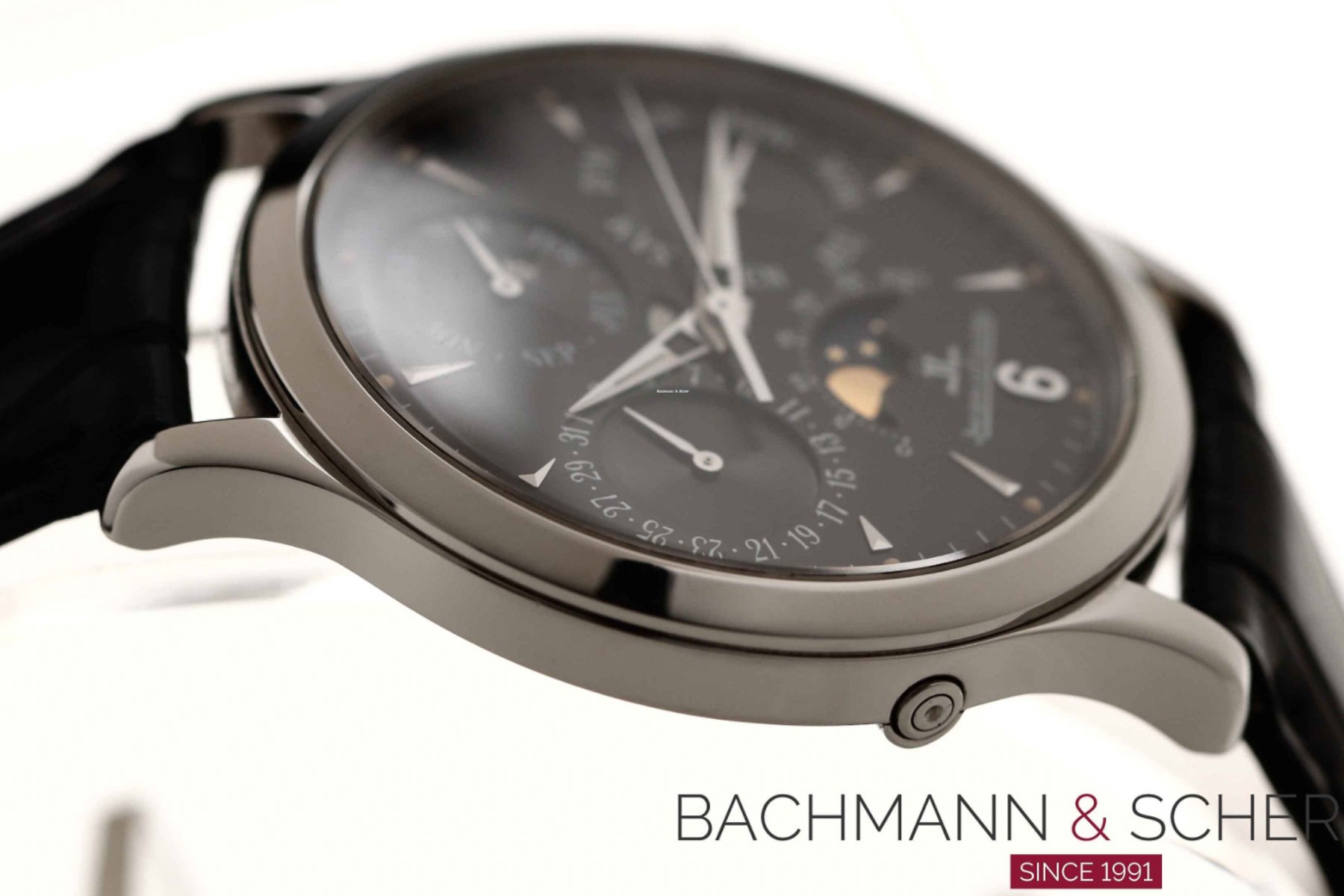 I know that the world has become more casual and as a native South Floridian, I could live in shorts and flip-flops for the rest of my days. I don’t think it would make me any less productive and I’d be far more comfortable. But, work-from-home comforts aside, I know that’s not the way of the world as of now. We actually have to dress like grown-ups at times. When it comes to watches, a similar casualness has entered the fray. We wear sporting chronographs and dive watches all the time now. Therefore, the delicate and elegant dress watch feels less and less relevant these days. I know this and you know this, but do you ever get this little uncomfortable itch telling you to act your age and wear something appropriate? Well, I do and I wonder if I’ve spent too long overlooking the fancier side of things such as the Jaeger-LeCoultre Master Control Perpetual Calendar. 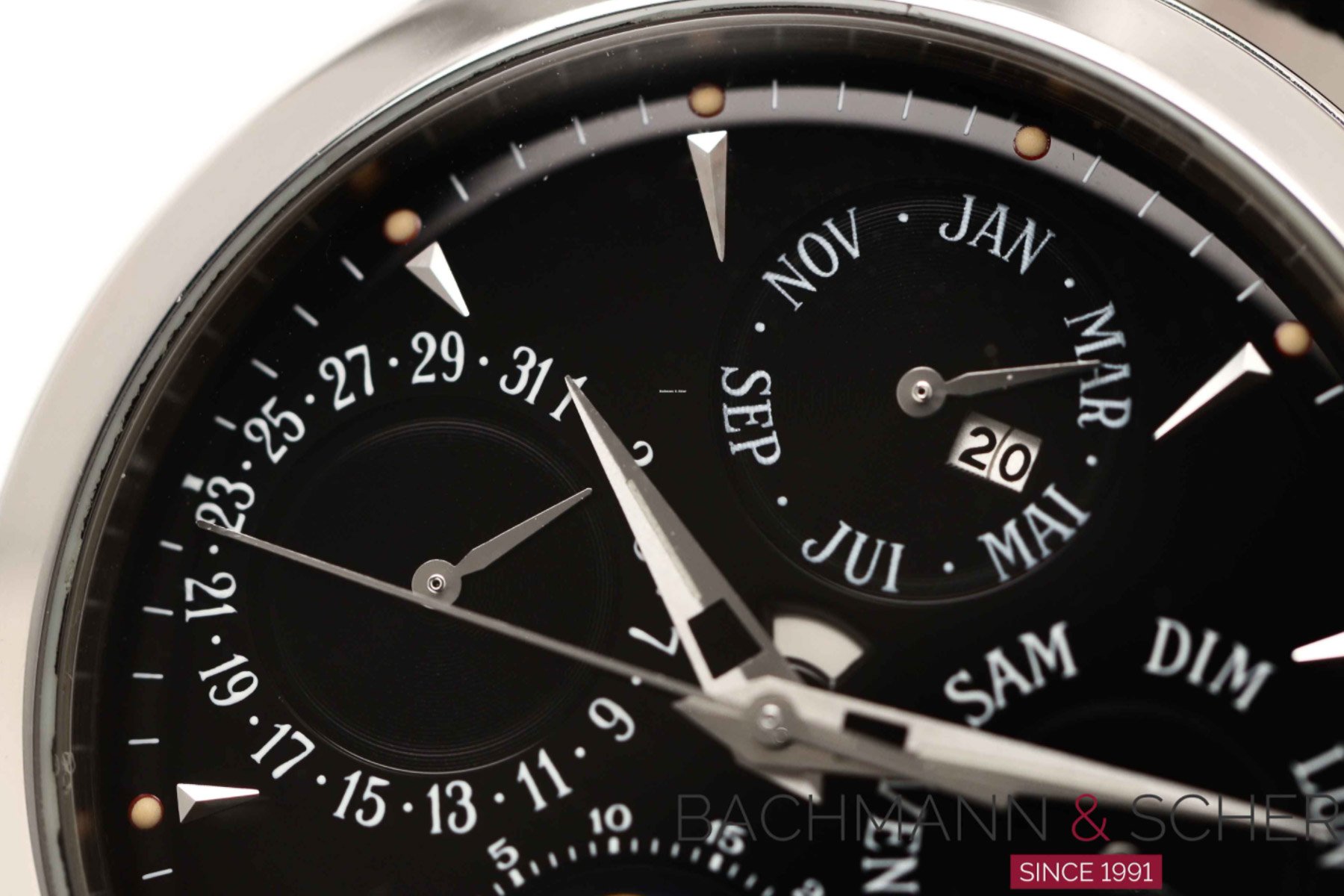 G2…he’s kind of our hero

Just a month or so ago, I ventured north to the land of wooden shoes and Heineken. I was able to spend some time with my Fratello teammates and this meant seeing Gerard, aka “G2”. G2 is a man of surprises. Did you know that he drove a ’90s Maserati Ghibli for over 100,000km? He likes fun things like older Japanese bicycles, orphan cars (like SAABs), and, of course, watches. No, this isn’t a dating site and I’m not “shopping” G2, but he is a seriously fun person. Plus, you never know what the hell is going to be on his wrist. This last time, it just happened to be the Jaeger-LeCoultre Master Control Perpetual Calendar and, folks, I was smitten. 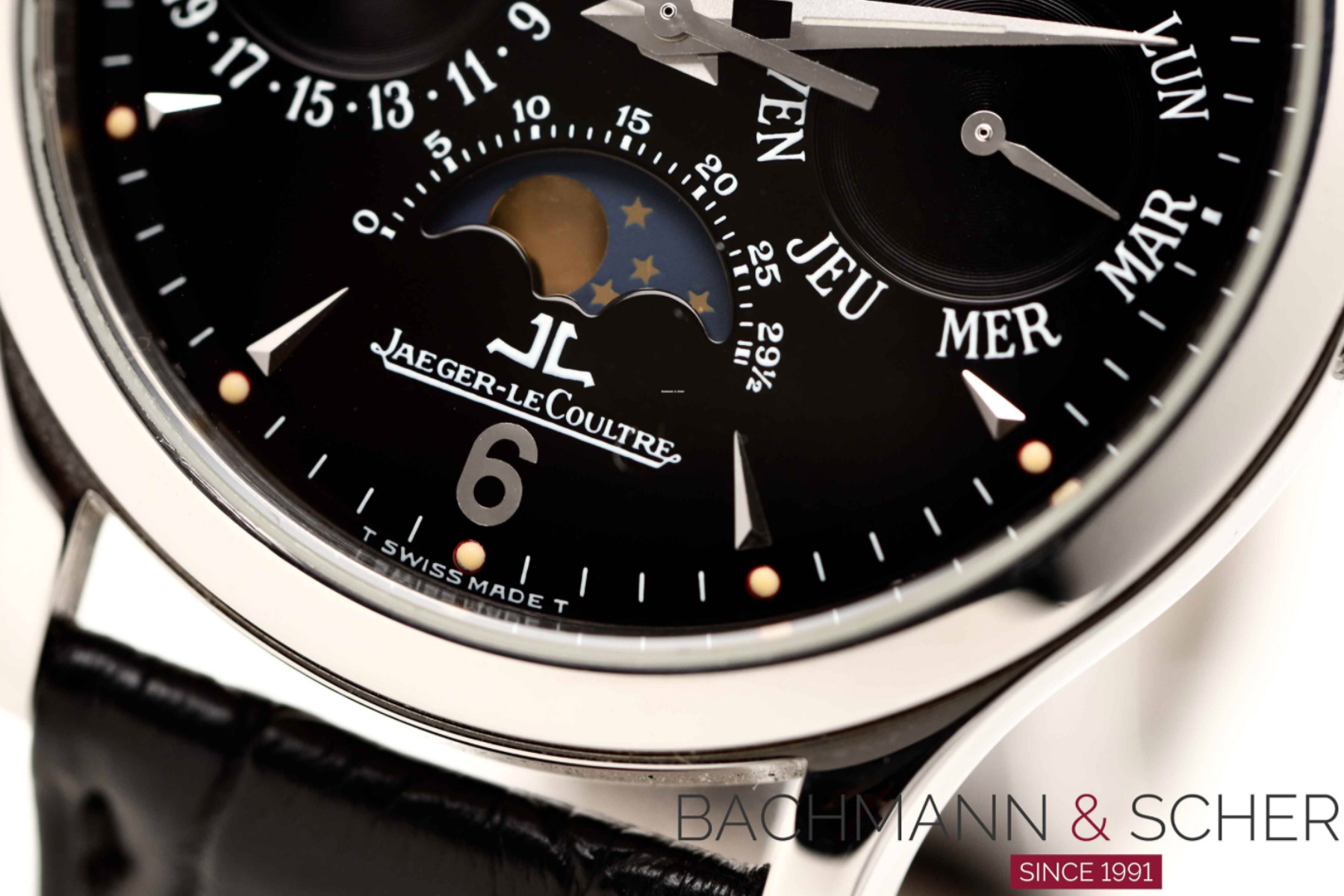 Jaeger-LeCoultre has a wild history. It’s one that I won’t come close to reciting here, but my take is that the brand went from being a strong movement maker throughout its watchmaking history, to an even stronger watchmaker in the 1990s. This period marked the rebirth of mechanical movements and JLC was able to seize that moment. If you stepped into a high-end jeweler at that time, you were given one heck of a story about JLC. The company did a nice job of training salespeople to recite a yarn about how JLC was essentially the clothier to the stars. Names like Patek, Audemars, and the like were clients, and now JLC was doing its own thing. Oh, and while the brand’s wares weren’t cheap, JLC undercut the big dogs. It felt like you, the consumer, was able to go direct to get the good stuff.

I actually thought it was later, but it was in 1991 when Jaeger-LeCoultre first introduced its Master Control line. These watches were meant to bring the best in watchmaking due to a stringent 1,000-hour test after completion. A wide variety of dress watches with complications from the simple to the complex were sold and most came with very clean, stark dials in silver. My Dad ended up buying a couple of these — one at a healthy discount when a store was closing — and they were and remain pure class. Because they were five-figure watches and a bit confusing to me, I had never really looked at the Jaeger-LeCoultre Master Control Perpetual Calendar. Until now… 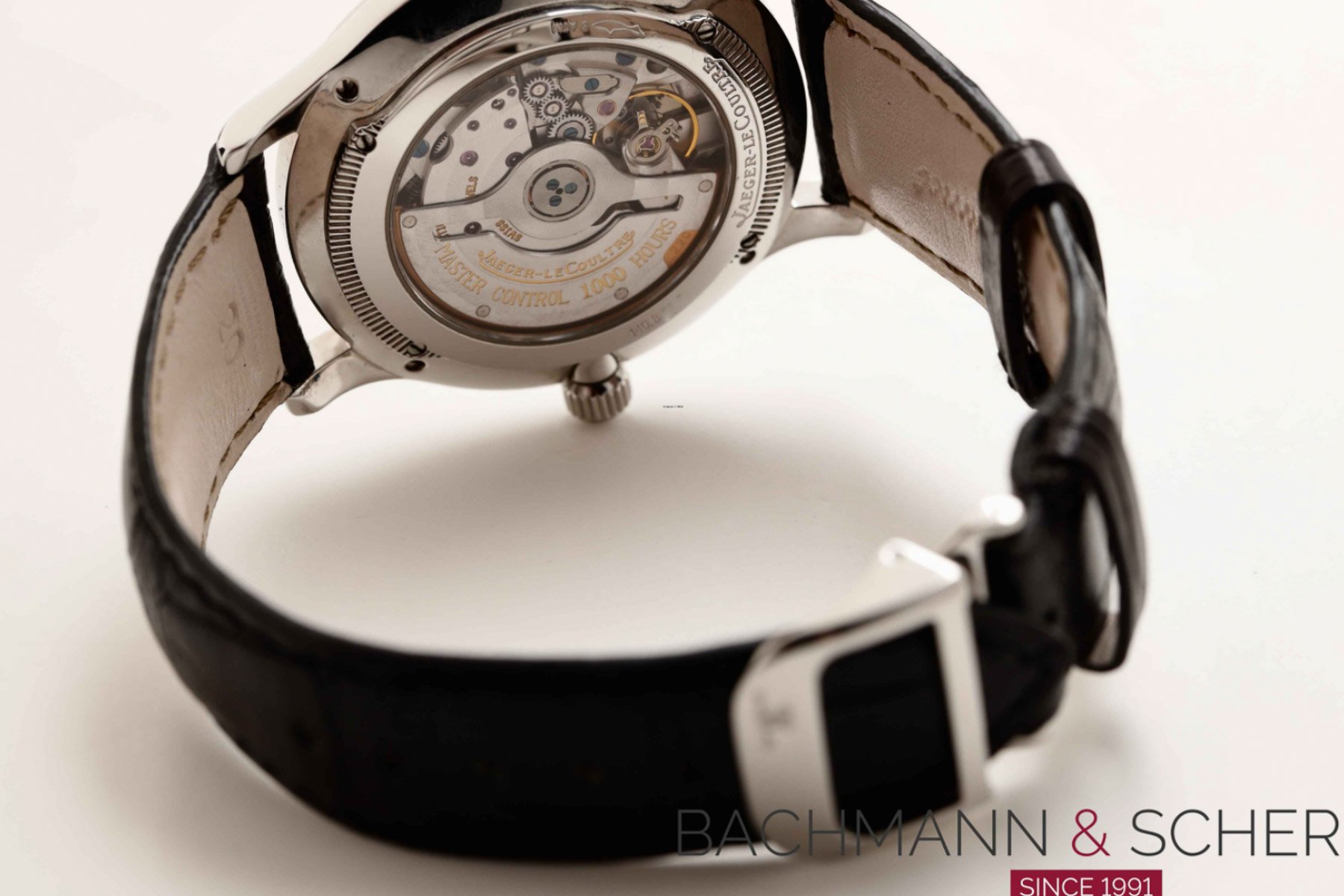 When I took a look at Gerard’s wrist, my eyes stopped dead in their tracks upon seeing this black-dialed beauty. The Jaeger-LeCoultre Master Control Perpetual Calendar is one achingly gorgeous watch. With all the information on the dial — day, date, year, month, moonphase, and, yes, the time — it stays clean. It’s also incredible size-wise. It’s a healthy 37mm, just 10.1mm thick, and can go for a swim with 50 meters of water resistance. The jaw-dropping in-house caliber 889/440/2 is on display on these black models (the silver edition has a solid case back) and it’s worth a look. That movement, by the way, was manufactured by JLC, but there was some sharing with stablemate IWC in terms of the perpetual mechanism.

The Jaeger-LeCoultre Master Control Perpetual Calendar is clearly a dress piece, but these days I’d say it also works with a smart pair of jeans or, in G2’s case, a TinTin t-shirt. The watch has tritium pips at every hour, dagger-like hands, and applied arrow markers. That, along with the black dial, lends just a hint of sportiness so it helps ease the transition to the fancier side for us slackers.

A perpetual calendar with this many complications is normally a seriously expensive undertaking. We’re talking tens of thousands of whatever currency you choose (save perhaps Bitcoin). With this Jaeger-LeCoultre Master Control Perpetual Calendar, though, prices hover just above the five-figure mark. As with a lot of JLC watches from the ’90s and early ’00s, there’s an insane amount of value to be had on pieces that actually fit like a modern watch. If you’ve never gone to a site like Chrono24 to plumb the depths of the “Master Contol” listings, go have a look. You’ll be flabbergasted. Furtermore, you just might decide that there’s something a hell of a lot better to buy than your next diver. Today’s Jaeger-LeCoultre Master Control Perpetual Calendar comes via Chrono24 and well-known seller Bachmann & Scher of Munich. The pictures and the watch are courtesy of the seller. As G2 tells us in an article on his watch, the black dial model was only around for a year or two in 1998–1999. This watch obviously was sold new only in 2005. It looks beautiful to me, and comes with all the trimmings. The price is €12,690 and I think that reflects the fact that these are starting to take off a bit. Seriously, if you’re a student of honest-to-goodness home-cooked value, you probably know these already.

So, are you ready to put on your big boy or girl pants and step up to a real watch? Or, would you rather drop this level of cash on another diver? Let us know what you think after voting.