Will you be on time with this German Speedy for €2,791?
Michael Stockton
comments 13
Share
Wrist Game
Crying Shame

Welcome back to Wrist Game or Crying Shame where, this week, we’ll take a look at the Omega Speedmaster Teutonic. Get ready for a serious discussion, but first…

Last week, the bulls were on parade as the Longines Legend Diver No Date crushed it with a 78% Wrist Game win. It turns out that many of you are just like me in the sense that you really don’t care about such silly things as a calendar. This week, let’s reach a bit to keep on theme with another watch that foregoes the dreaded date window. Our questionable candidate of the week just so happens to be the Omega Speedmaster Teutonic. Huh? 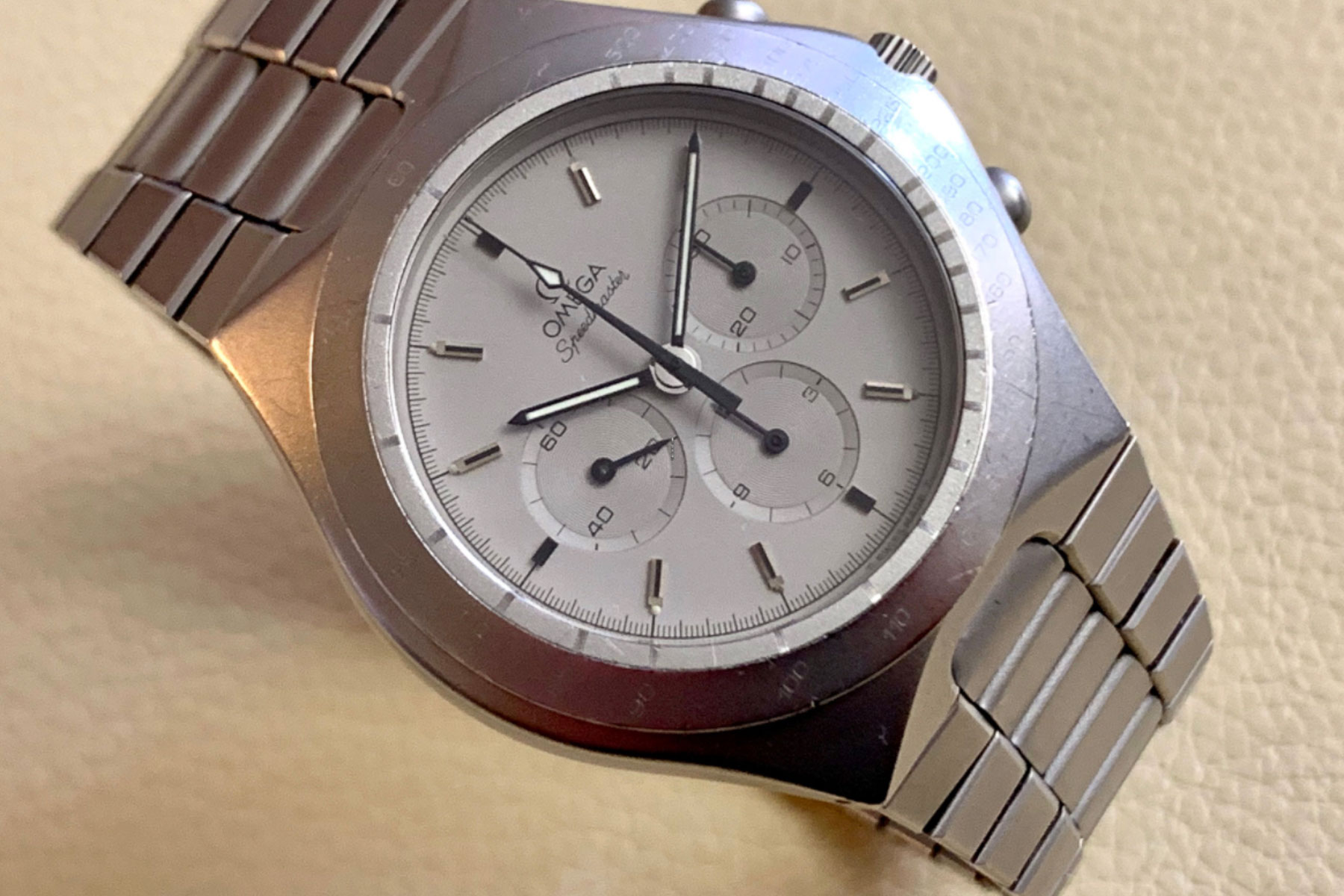 I’ll forgive you if you’ve never really heard of the Omega Speedmaster Teutonic. It’s a watch that rarely makes its way to the interwebs and our in-house lover of all things Speedmaster, RJ, doesn’t seem to rate them. As a result, these watches are rarely mentioned within the hallowed halls of Fratello. It turns out that back in the days of Kraftwerk,” Germany got its own lineup of Speedmaster models and they were, in a word, different. The watches were very “of the era”. They had bead-blasted cases with integrated bracelets and came with a variety of movements including the Lemania 5100. Oh, and because watches love nicknames, these Teutonics are often known as Mark V’s. 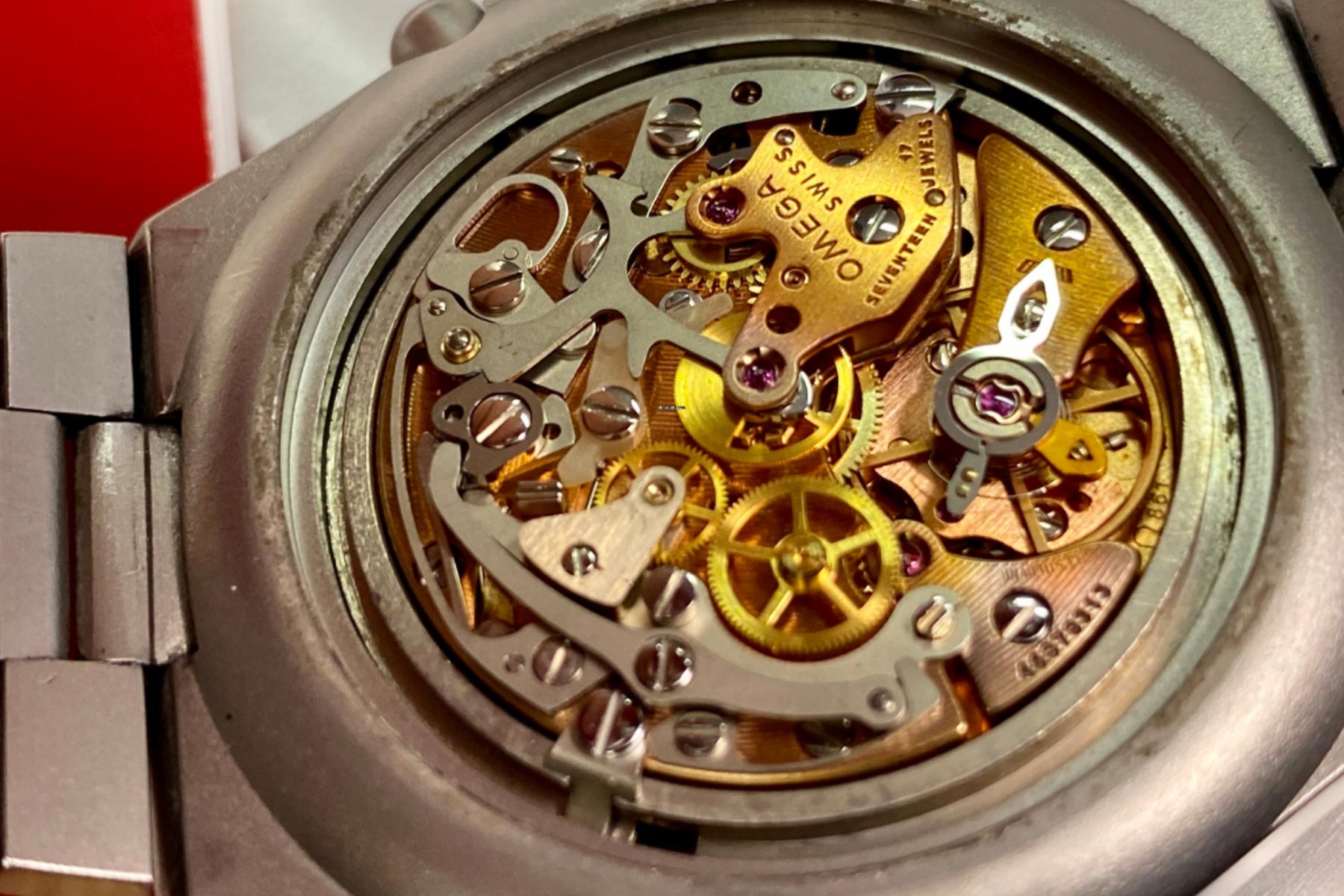 You’d have to travel way back to 2004 to find an article on a manual wind 861-powered Omega Speedmaster Teutonic. Check out those lo-res pictures and allow yourself to dream of RJ’s aughts mullet! Another thing you can do is head over to chronomaddox.com to read Chuck’s take on these wild watches.

In hand-winding form, reference 1450040 came in with a 42mm case and short lugs. The watches came with either a typical black dial in stainless or bi-color housings, a gray dial, or even a gold dial with bi-color hardware. Most seem to date these in the 1982-84 range. No one really knows how or why the Omega Speedmaster Teutonic came into production. In fact, some even say it was available outside of Germany. What we do know is that all of them contained Seamaster case backs along with flat sapphire crystals. 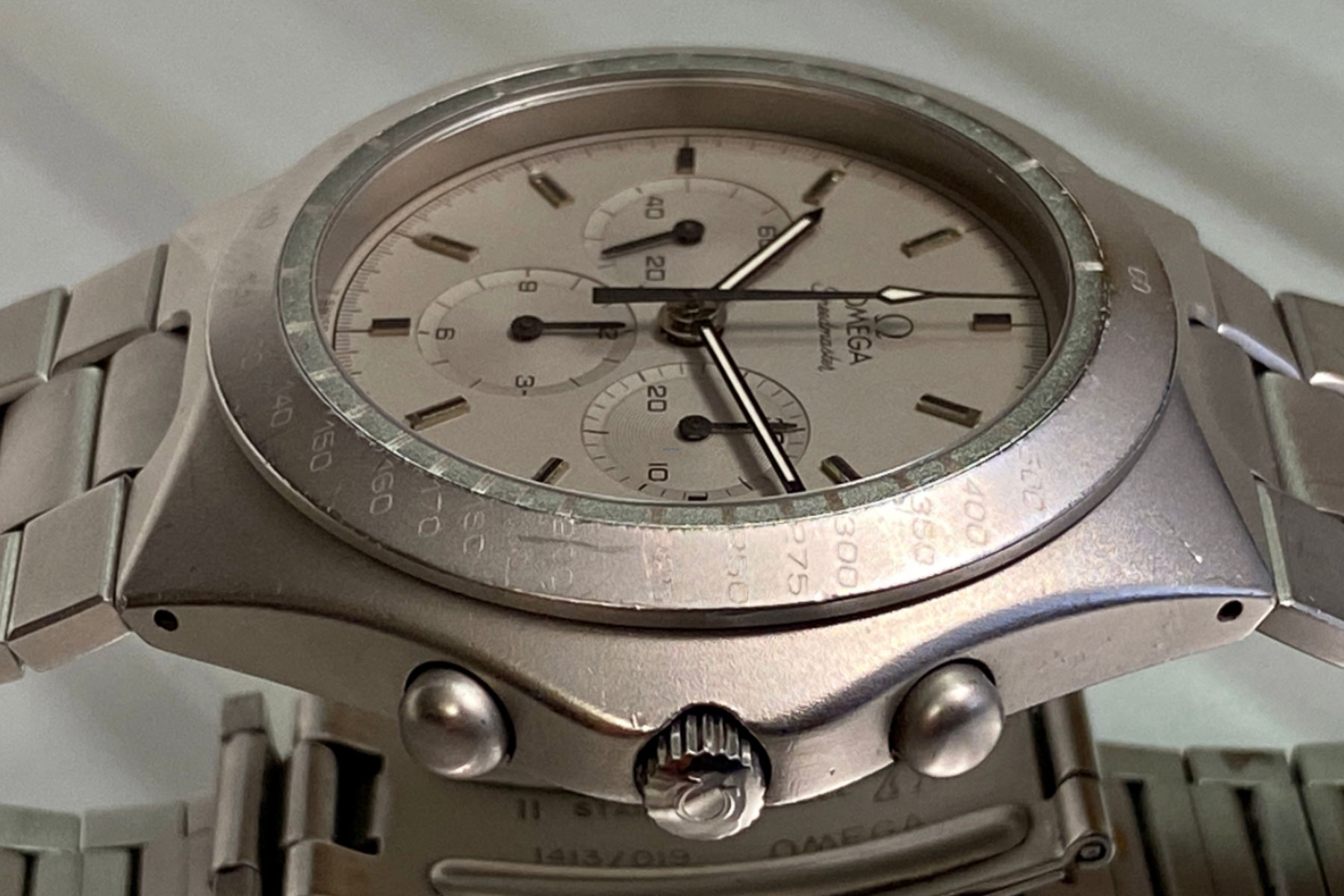 Looking back on this wild watch

I don’t own an Omega Speedmaster Teutonic, but I have come quite close to pulling the trigger. I think it looks a bit space age and it does remind me of a time when people still felt the future would be full of flying cars and whatnot.

Actually, for 1982, it must have looked positively modern. But there is one major issue with the Teutonic and that relates to aging. I don’t know what the hell Omega was doing in the early 1980s, but perhaps these watches were built by trainee high school kids from Bienne. Seriously, 99% of these watches look awful today. The crystals must have let in loads of moisture because the dials are often rotten. I’m also guessing that the steel bezels were made of that silver wax on scratch-off lotto tickets. Seriously, the tachymeter scales are almost always illegible. 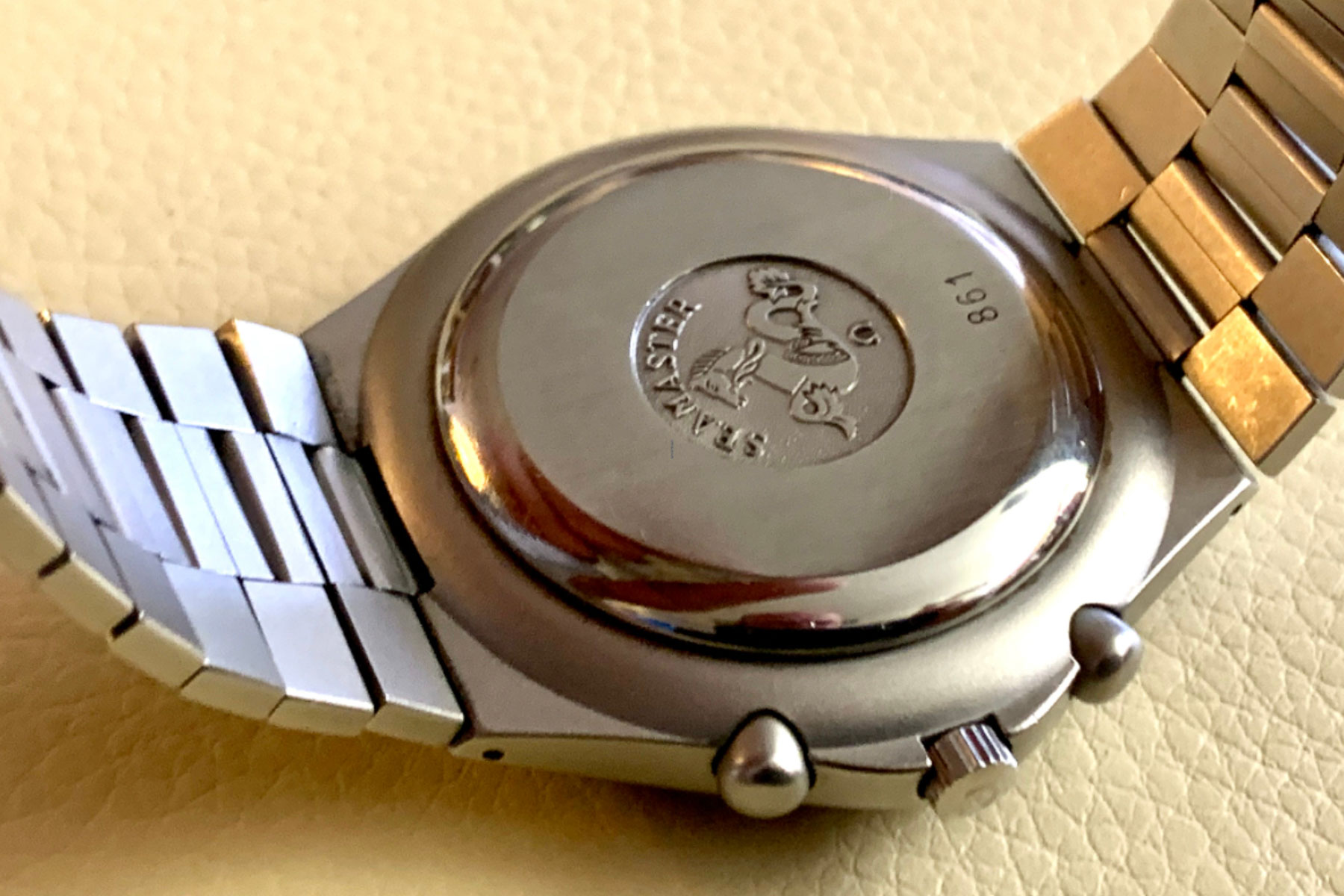 All that being said, I should have bought a decent Omega Speedmaster Teutonic. It just feels like the perfect chronograph to pair with some era-correct Pasha pattern seats in a 928. These 861-powered models suffered in the €1,200 range for what seemed like forever. Sadly, those days are now long gone. You can find pieces below the €2k mark, but the patina is likely to scare away even the hardiest neckbeard. Yes, a rising tide lifts even the nastiest Rivas and these Speedies now sit in the €2,500–3,000 range. Honestly, for a Speedmaster this old, limited, and weird, can you truly complain? 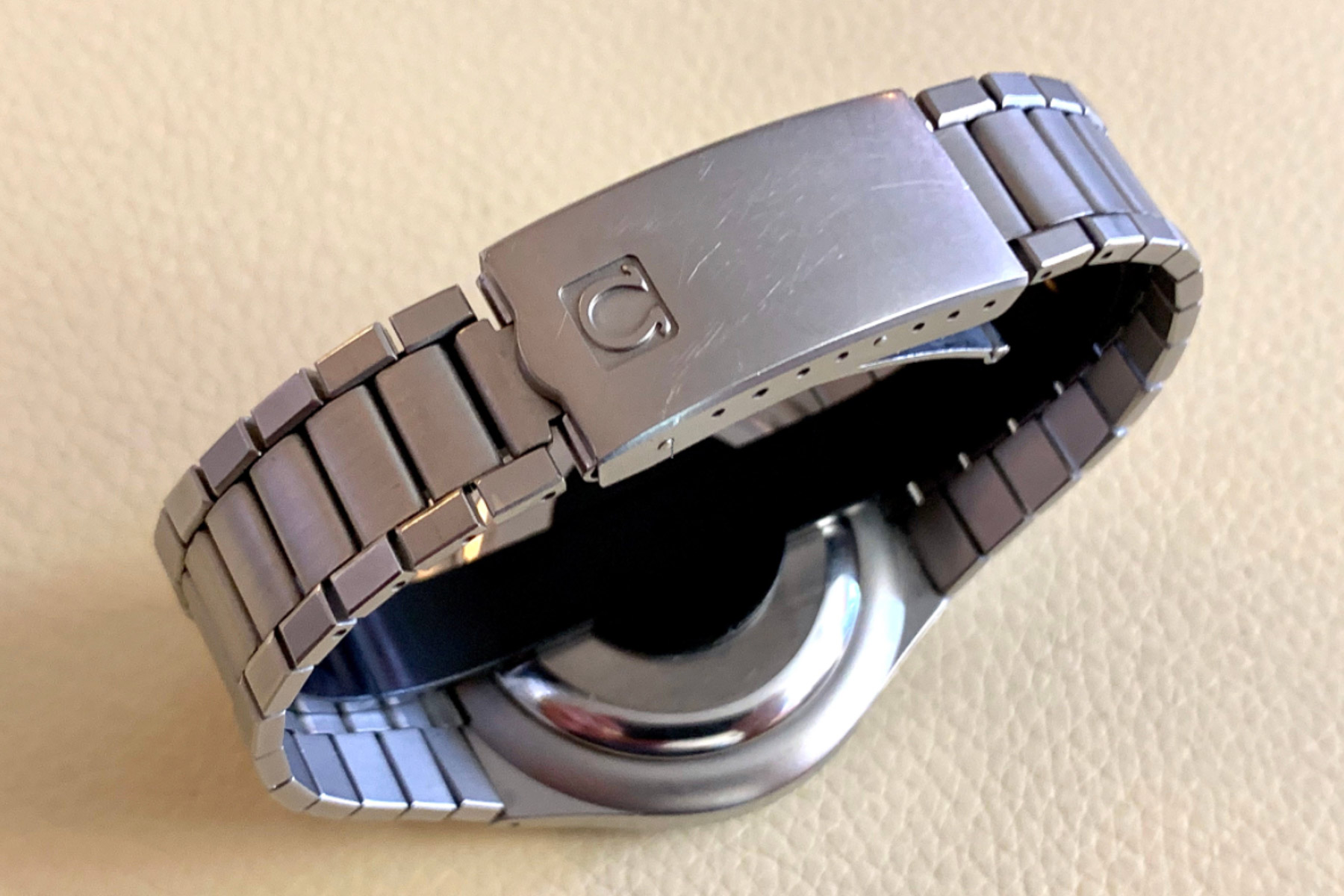 Today’s Omega Speedmaster Teutonic (and the lovely pictures) comes from Chrono24 and a seller in the Germanic-sounding town of Kreuzlingen, Switzerland. It definitely looks worn, but it’s presentable as far as these go. It also received a service at Omega back in 2010, so that’s a bonus. The bracelet looks good and it all comes together with my pick of the litter: the grey dial. Really, if you’re going to go futuristic, what better than a case-matching matte grey dial? It just looks slick and, besides, black dial Speedmasters are a dime a dozen. If you want to look the part while ticking the faux-ivories on your Minimoog, you’ll also need €2,791. 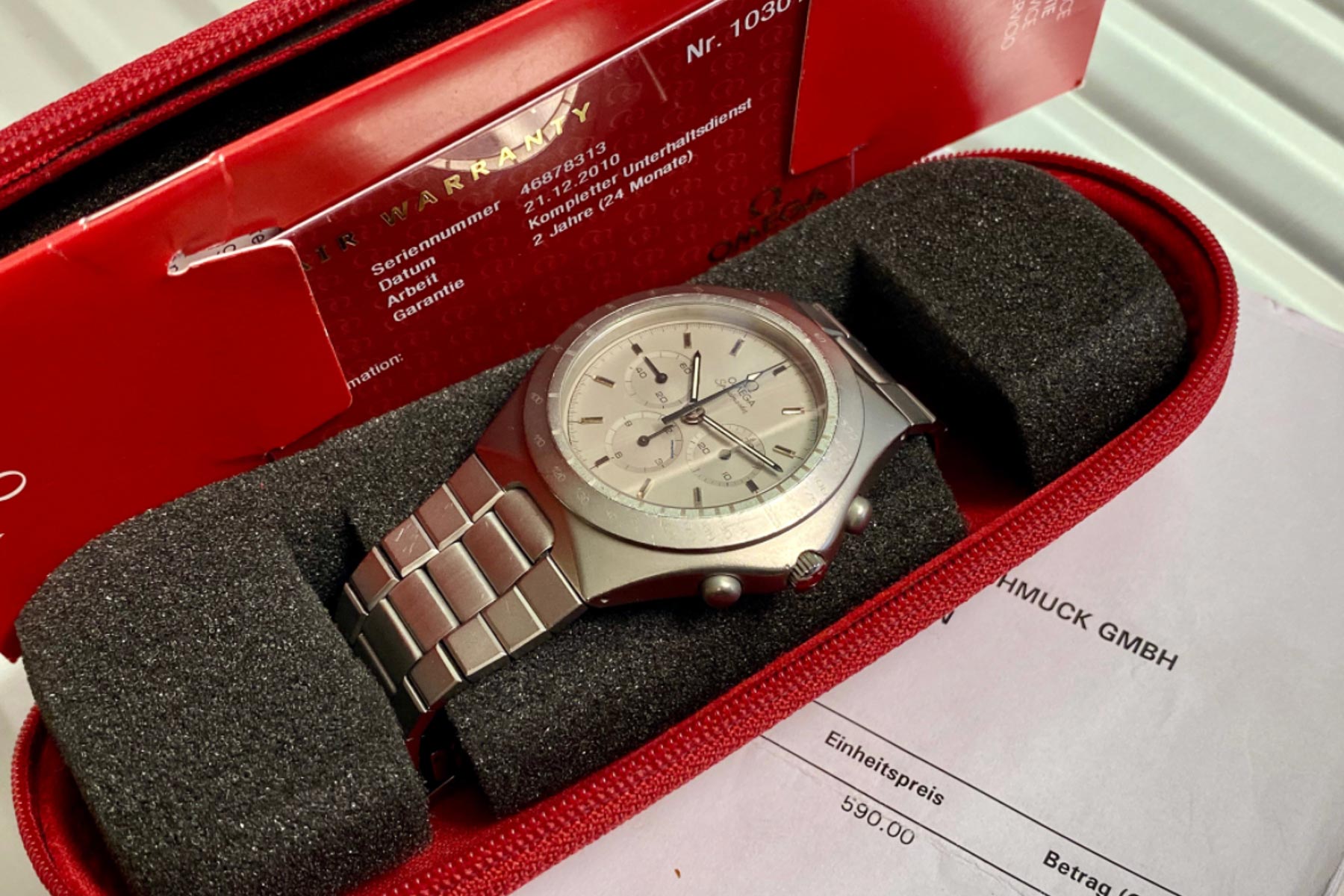 I’ve never truly loved any of the automatic “Mark” Speedmasters. I like my Speedies in manual, but I accept different funky cases such as this or the Mark II. Neither the Mark II nor the Omega Speedmaster Teutonic have ever truly risen above cult status, though. Perhaps it’s high time that changes, but perhaps not. Let’s see what you think!

Hot Topics
Laventure Automobile Chronograph With A Proprietary Movement — Marking A Huge Leap Forward For One Of The Industry’s Most Promising Brands
155 comments
Fratello Exclusive: An Inside Look At The MoonSwatch Production Facilities
75 comments
Selling Your Watch To A Dealer Or Trading It In — Tips From A Former Watch Dealer
49 comments
Summer Splash — Round 2 : Jorg’s Tudor Pelagos FXD Vs. Lex’s Hublot Big Bang Integral Ceramic Sky Blue
47 comments
We Talk To Swatch Group CEO Nick Hayek About The MoonSwatch
44 comments
Popular
Rolex Submariner – Historical Overview Of A Diving Legend
Robert-Jan Broer
22
You Asked Us: Tissot Powermatic 80 Seastar 1000 or Longines HydroConquest
Robert-Jan Broer
17
Seiko Tuna For The Rest of Us
Gerard Nijenbrinks
13