Hands-On With The Yema Superman 500 — A Bigger, Better, And Quite Elegant Update

Never change a winning team, they say. Well, the folks at Yema don’t adhere to that rule. The Superman range is attractive and successful, but still, they went out and tried to improve it. Last Friday, the Yema announced the Superman 500. With adjustments to the bezel, the water resistance, and the thickness, the designers seek to make an already appealing package even more appealing. Let’s see if they succeeded!

My first encounter with the Yema Superman was a little over a month ago when I looked at the currently sold-out Full Lume version. That was a fun watch to have on the wrist for a while, especially in the dark. The watch we’re looking at today is also a Superman, but it’s quite different indeed. Although the dial might be the most obvious difference that catches your attention, it’s not the only point worth addressing today.  There’s actually a lot more that has been changed for the Yema Superman 500. 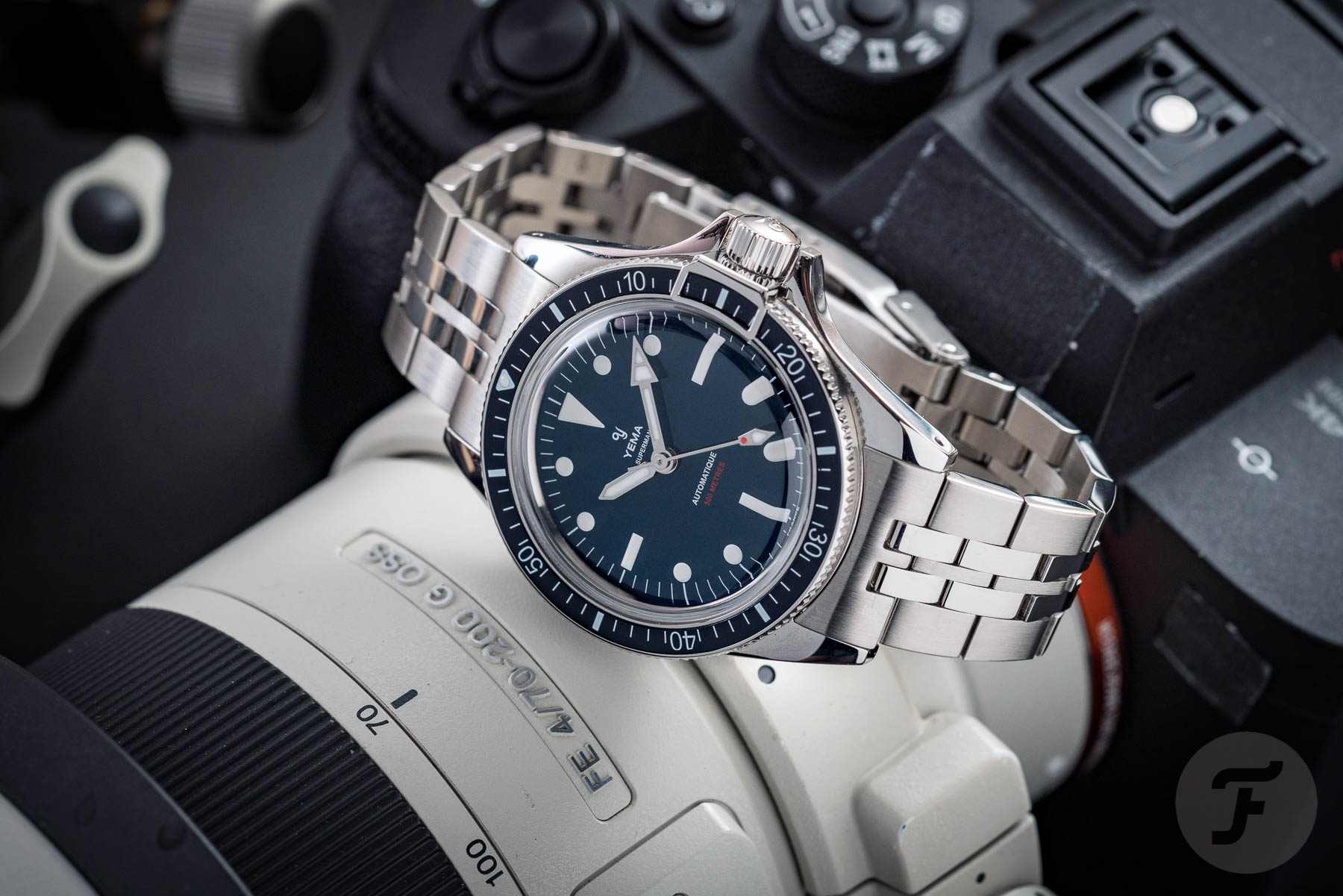 First of all, the case is now fully polished, which gives the watch a less sporty and more elegant look. The Superman 500 will be available in 39 and 41mm, as is often the strategy with Yema’s offerings. Both will have the same thickness, though. At 13.4mm tall, it’s actually 0.4mm thicker than previous Superman models. Not that I noticed that on the wrist, to be honest. But — and now you’ll get where that name came from — the added thickness of the case means that the watch now has a water resistance of up to 500 meters. To achieve that, Yema has redesigned the boxed sapphire crystal. 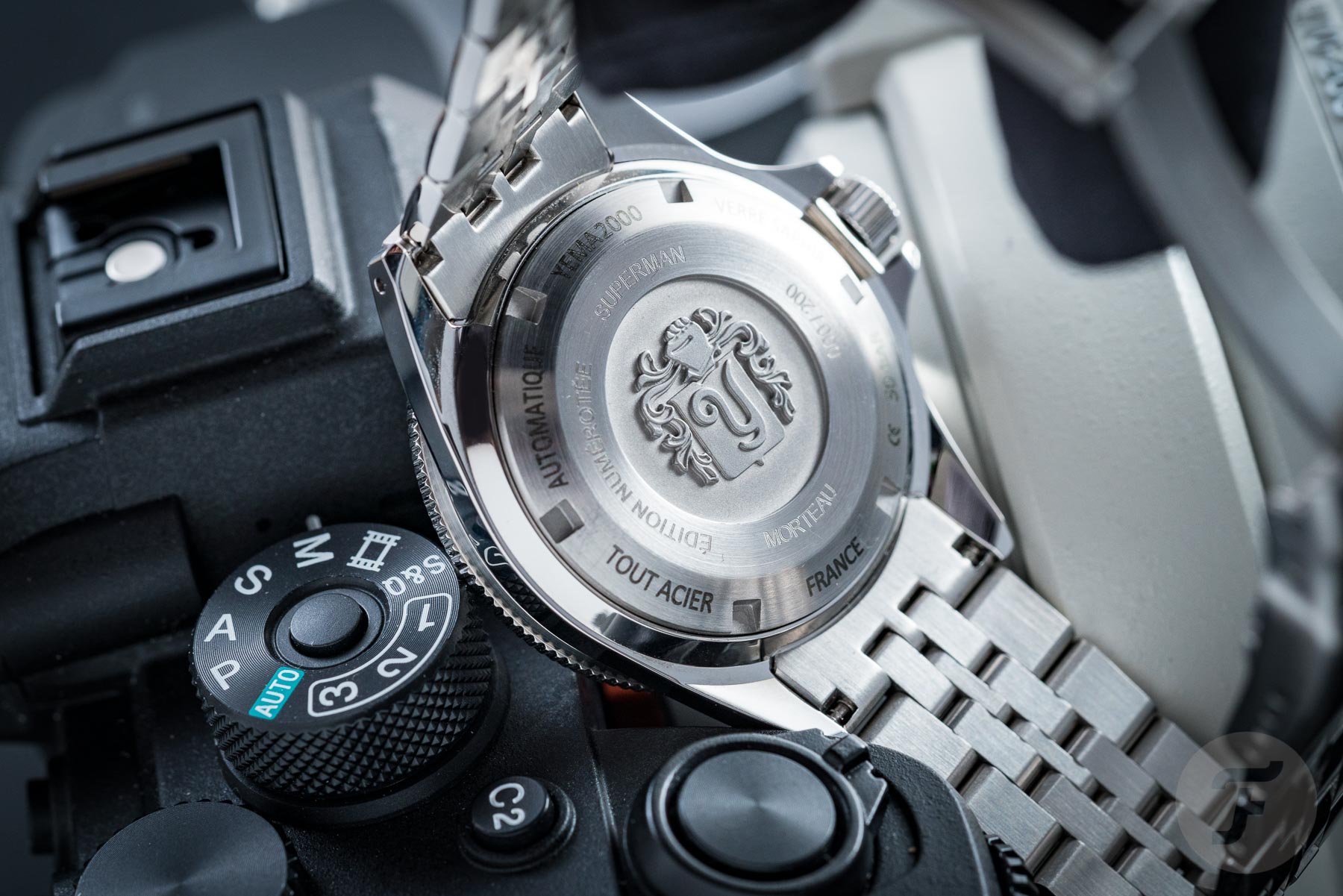 While the case itself is a tad thicker, the crystal is now a little lower and wider to make it more resistant to water pressure. This makes it protrude a little less above the bezel. To me, this adds to the more elegant character of the watch, something that can also be said about the classic Yema crest on the case back. Thanks to the brand’s new microblading techniques, the logo is now sharper and deeper than ever. But, wait. We’re not done talking about the water resistance just yet. 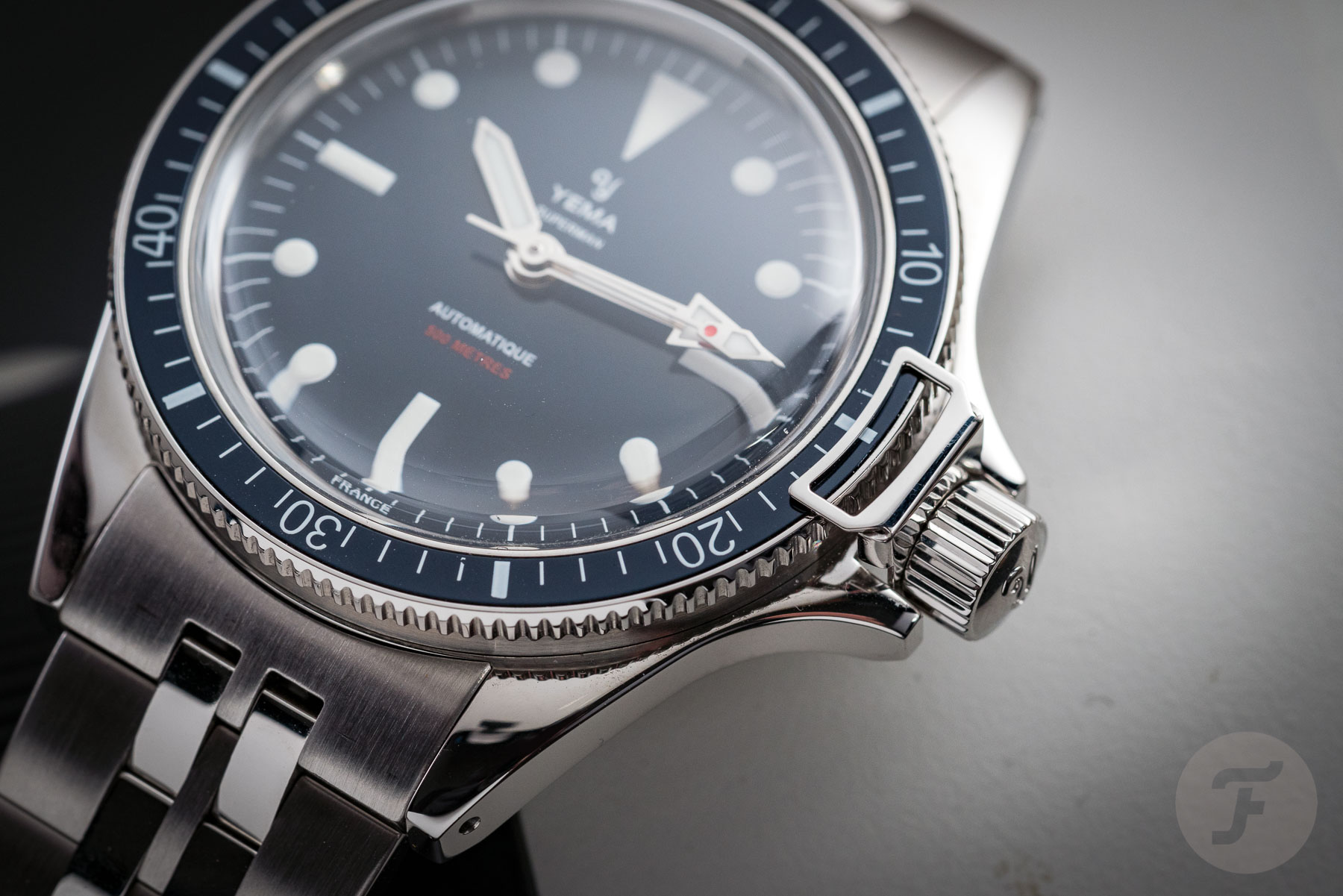 Water-resistant at all times!

The Superman 500 is equipped with the signature Yema bezel clamp, ensuring that the bezel won’t shift positions during a dive. That’s great, of course, but it is operated through the screw-down crown. That means that adjusting the bezel while you’re in the water could cause a major risk of water entering the watch. Well, not anymore. For the Superman 500, Yema now ensures that even when the crown isn’t screwed down, the watch is still water-resistant to 30 meters.

Yema has also redesigned both the bezel clamp and the bezel itself to give it a more solid construction. It’s now easier to precisely set the bezel, and the clamp feels less flimsy than before. I think this is a great improvement. To me, the clamp has always felt more like a gimmick, and I’d rather have a watch without it. But the people at Yema are showing that they’re very serious about it and that they were even able to improve the construction. Chapeau! Now, let’s return once again to the elegant character that I mentioned earlier. 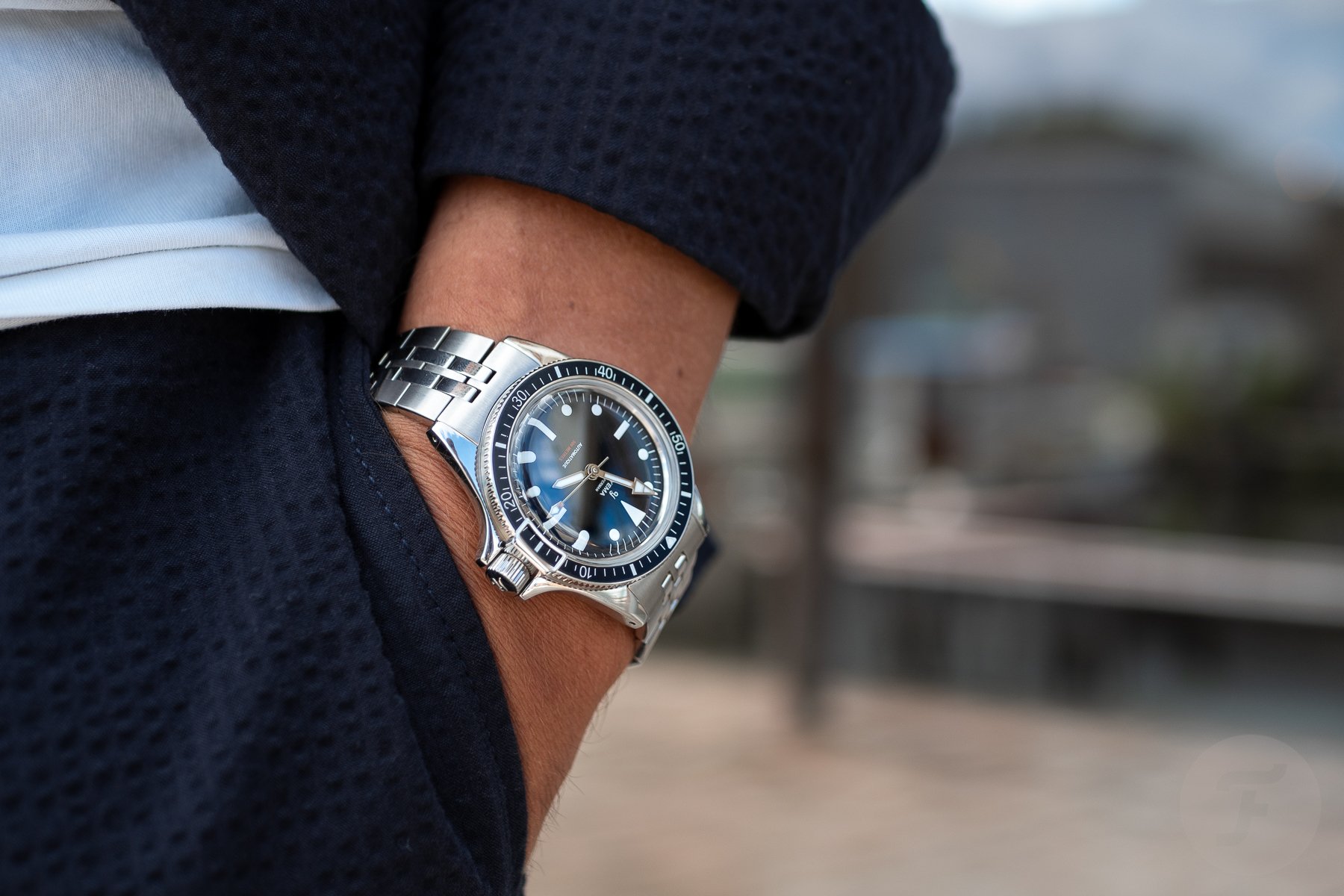 The new Superman will be offered in two versions. There is one with a glossy black dial, black bezel, and “aged” patina on the dial and hands. The other features a glossy dark blue dial and bezel with stark white lume all around. I had the pleasure of wearing the latter version for a few days. Honestly, it would probably also be my personal pick because I’m not such a fan of fake patina. Then again, I haven’t actually seen the black version for myself, so I’m not sure what it looks like in the metal. All I can say is that the blue one looks incredible!

The shade of blue that Yema chose is spot on. It feels like a very royal, rich kind of blue. There’s a slight difference between the color of the bezel and the dial. But in most situations, you don’t notice it, and when you do, it’s not a problem at all. That’s mainly because the blue on the dial has such a beautiful tone to it. It’s often just very dark, but when you see it in direct sunlight, for example, it has a very warm feel to it. I find that this warmth is accentuated by the dark red accents on the dial and hands. 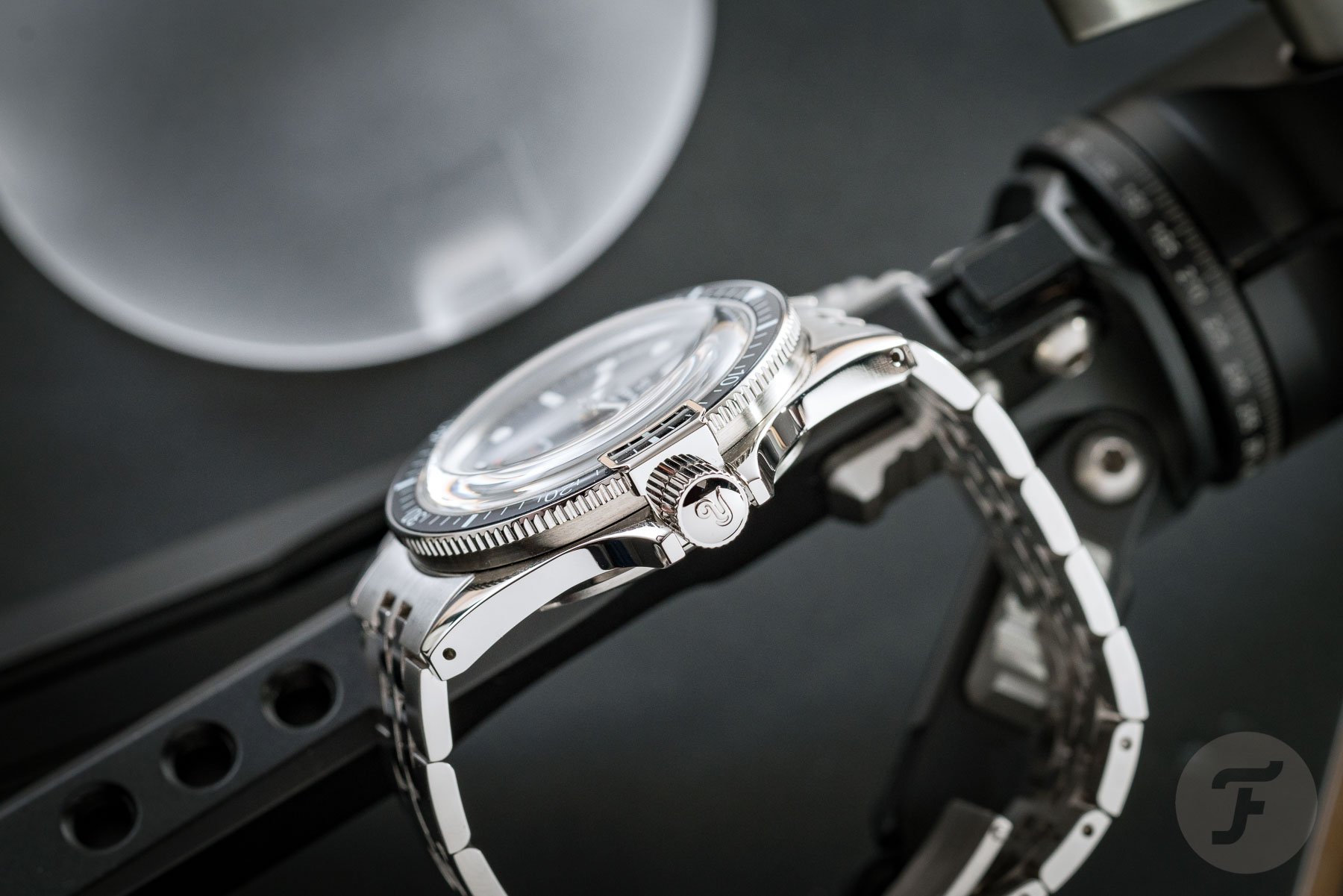 This time, the French brand has actually chosen to use its native language for the text on the dial. I already found the French text on the bezel of Serica’s 5303 very charming, and I’m finding the same thing with the Superman 500. In some way, to me, it adds to the elegance and friendliness of the design. The rest of the dial design is in no way a very original one, but the classic diver style just works very well. It’s highly legible, and the lume seems to sit on top of the dial, which adds a little bit of depth to it. On the wrist, the case feels very solid overall. Unfortunately, the same can’t be said about the bracelet. 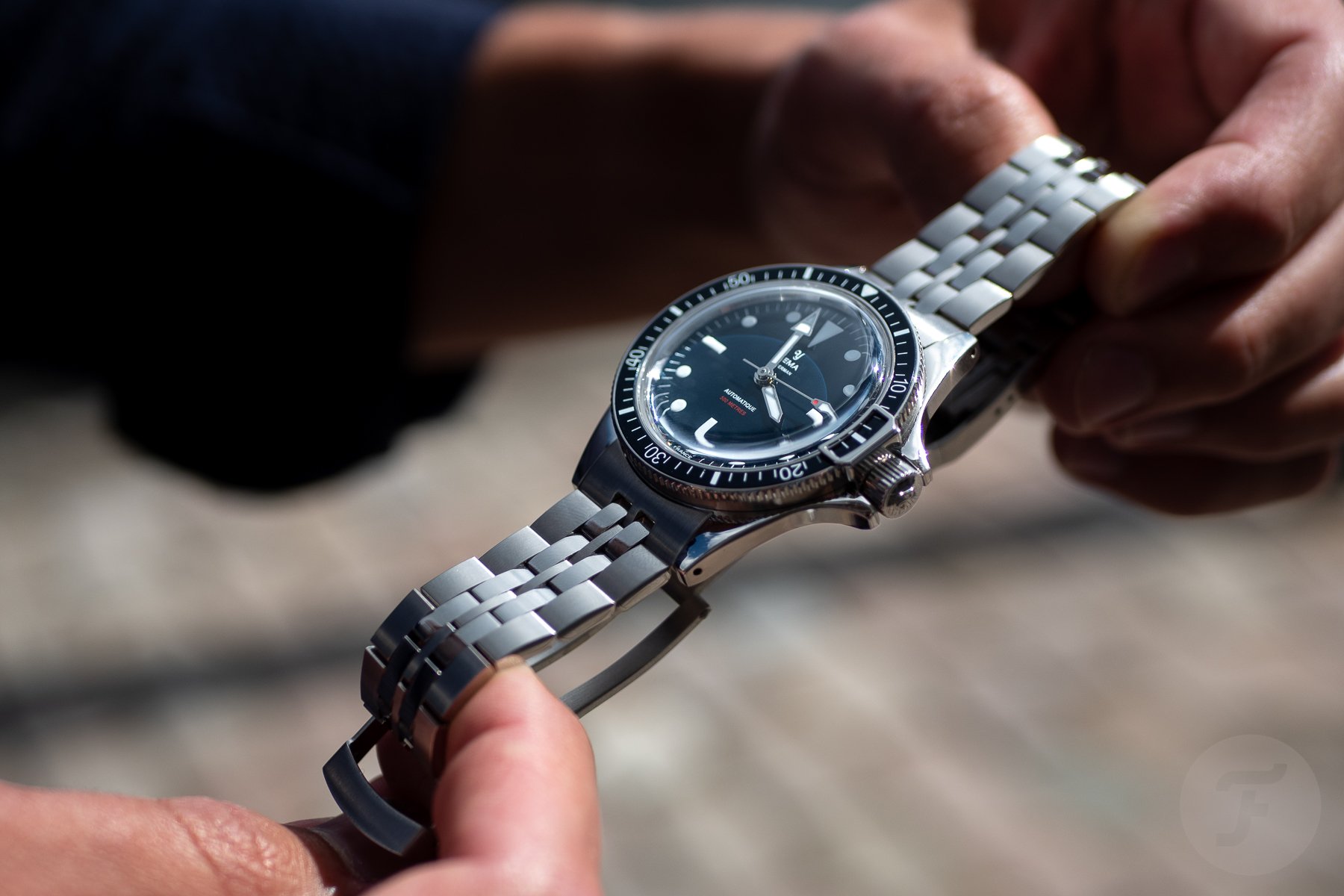 The bracelet is the weakest link

It’s one that we already know from previous Superman iterations, such as the Heritage model. And that’s exactly what I don’t like about it. It doesn’t seem to be made for the Superman 500 with its all-polished case. The bracelet, which almost looks like a flattened Jubilee bracelet, has brushed end links and outer links combined with polished center links. To me, it just didn’t look like the right fit. I did get used to it over time, and an all-polished bracelet might also be a bit too much. But I do think there’s something a little bit off here.

The bracelet is nice and sleek, though, which adds to the comfort while wearing it. Then again, what I didn’t find very comfortable was the folding clasp. Although the folding parts are milled, the rest of the clasp looks a bit cheap, and the flip lock didn’t secure the whole thing very well. I definitely think this is something that Yema should improve in the future, especially when the watches that the bracelet is being paired with are becoming more and more advanced, like this Superman 500.

Pictures courtesy of Matt AKA @clock_n_watch

Overall, the Superman 500 is quite the watch, though, especially when you take the movement into account. The watch is powered by Yema’s proprietary YEMA2000 caliber, which has 29 jewels, runs at 4Hz, and delivers a power reserve of 42 hours. Yema says that it has been regulated in four positions for accuracy between -10 and +10 seconds a day. There are not many watches available in this price range that could claim the same thing. Add to that the increased water resistance, the improved bezel construction, and the elegant design, and you have yourself a very compelling proposal.

What do you think? Are you a fan of the bezel clamp? And which color would you choose, black or blue? Let us know in the comments!