At Fratello Watches we show a lot of love for Omega’s Speedmaster watch. But there is a new watch that is accelerating and heading for a position at the top: Yema Rallye. This year there were several articles about this extravagant watch with a true motorsports connection. Michael wrote about his Obrey branded Rallye and Balazs revealed the fact that Mario Andretti’s Rallye is actually a one-of-a-kind piece (read about Andretti’s Rallye).

So what elements can we look at? In this article I would like to look at the variants and point out a few interesting design elements.

Rallye: many aliases and variations

You’ve probably heard that Yema released watches under different labels. The most famous alias is ‘LeJour’. Yema used this name for watches which were shipped to the United States in the sixties. Besides this, I know three other names on the Rallye at the time of writing. Often it’s difficult to point out the connections between Yema and the aliases since it’s a long time ago. Frankly, things weren’t (good) documented back then… Unfortunately, I wasn’t able to obtain pictures of all ‘brands’. Though I was able to make a family portrait. Below two aliases and a ‘regular’ Yema:

Three times a slightly different execution of the Rallye model. Since those watches only differ in small details it’s obvious that they are family in some way (read, have a ‘Yema-mother’). Look at each individual piece and then start to compare. So many interesting differences to spot!

How many names does the Rallye have?

Again, at this point I know the following names:

Five different branded Rallye watches and maybe more (I’m not including pieces with Yema on the dial plus an extra brand). While the original Rallye with the Valjoux 7730 movement was released in 1967 there were produced brand-variants in lower quantities or as one-of-a-kind. Probably requested by individuals and companies. I’ve seen more brands doing this kind of customization, but almost always accompanied by the original brand name unlike the Yema examples. 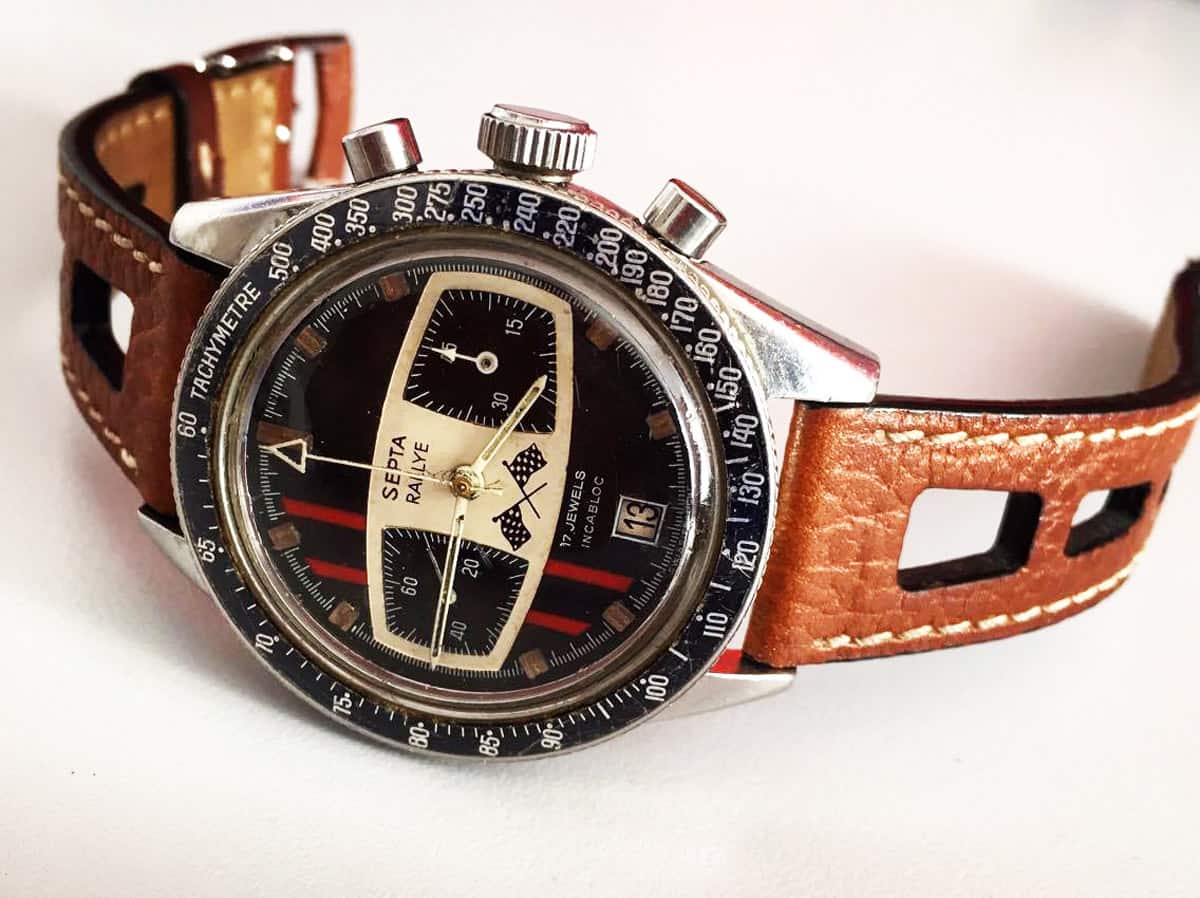 Example of a Septa Rallye on an original Yema rally strap (photo credit: dutchwatchshots on Instagram)

While we do know the history of the Wesley-branded Rallye, the history of the Septa and Polymac is still unsolved. It is guessing but I have a theory for the Septa chronograph: One of the known examples was sold on eBay and the seller was situated in Michigan, relatively close to Pennsylvania. The Southeastern Pennsylvania Transportation Authority (abbreviated ‘SEPTA’) was founded in 1963. So the SEPTA Rallye could be a custom branded present for employees or as a gift to someone else. The SEPTA was/is big enough to afford/request such a thing to Yema. Again, it’s only a possible scenario. It also could be just another export brand name by Yema… Again, one of the aspects which does make the Rallye such an interesting vintage watch. 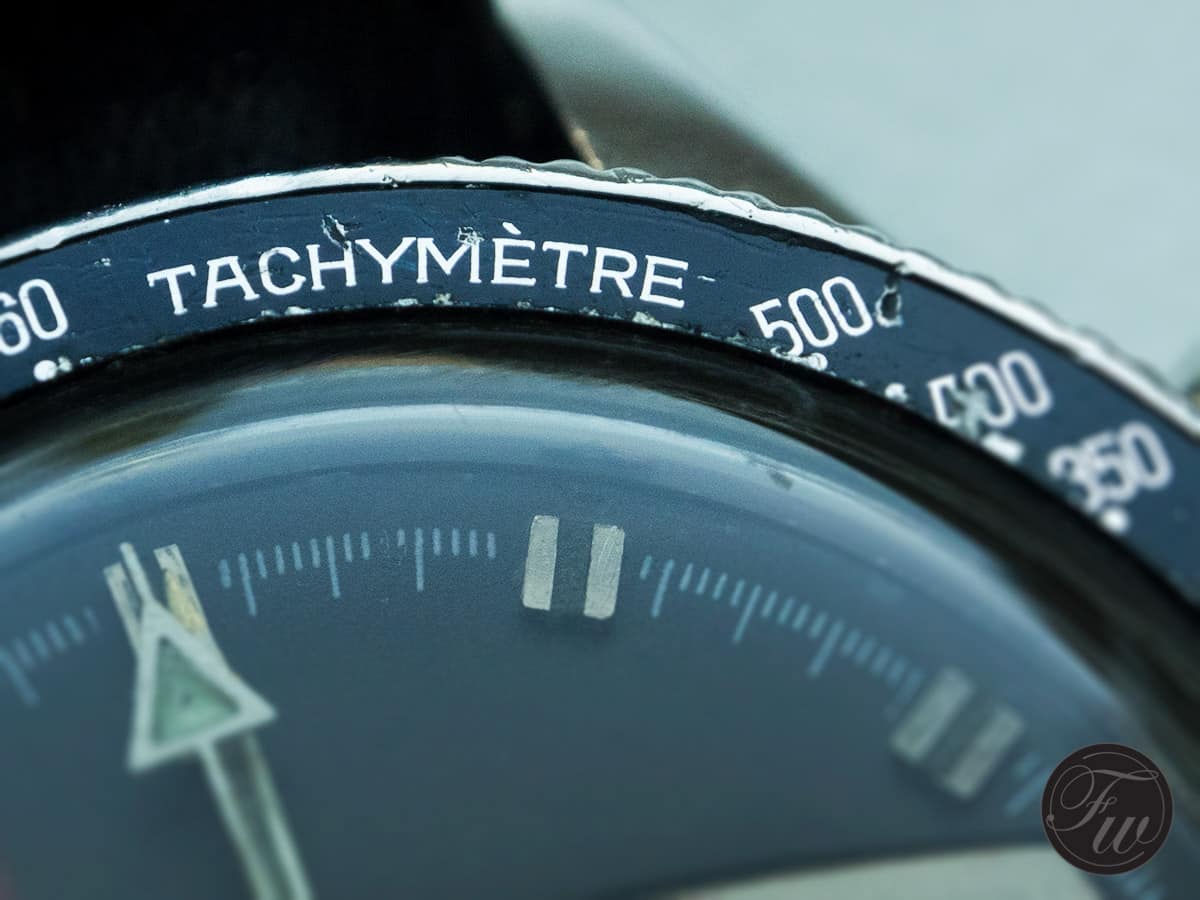 Different bezels on the Yema Rallye

If we look careful to the bezel you can spot slight variations on the Yema Rallye. Funny enough, the variations have a lot in common with Omega Speedmaster bezel variations. For example: my Yema Rallye has a dot-over-ninety bezel (like some pre 1970 Speedmasters), while the ‘Septa’ and ‘LeJour’ do not. The font size and font weight also differ. Look closely to the ‘TACHYMETRE’ text and we can spot even more differences: besides the font weight the Yema-version does have a l’accent aigu (É) on the ‘E’, while the other two are written without the sign. 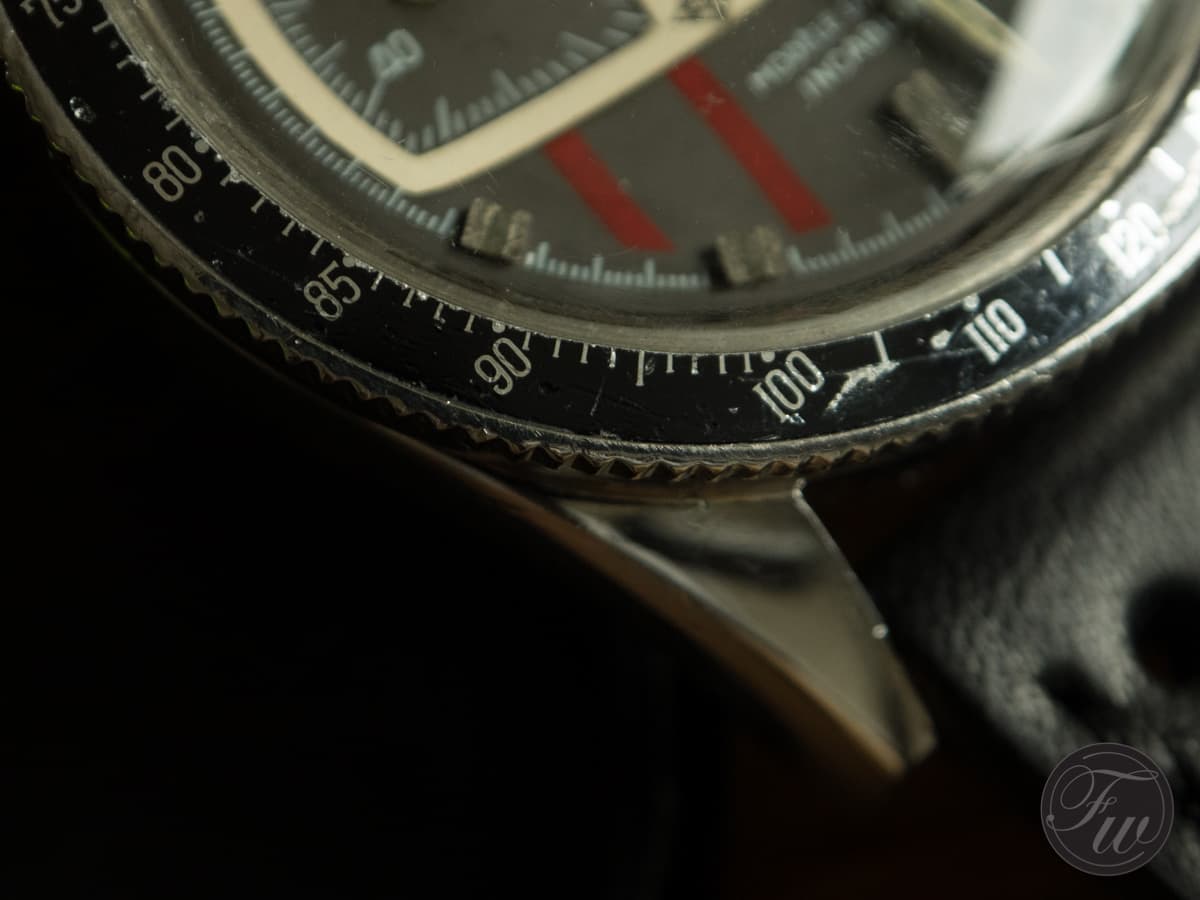 There are two variations of the minute counter known on the Rallye with the Valjoux 7730 movement: a 30- or a 45-minute counter at 3 o’clock. Some people say that the counter with a 45-minute scale is rarer then the 30-minute variant, but I couldn’t find hard evidence for this. So why 45 and 30 minutes? Maybe changing of lap times in motorsports? 45 minutes became more popular? Please clear this up for me in the comments-section below. (A French page with pictures of the two versions). 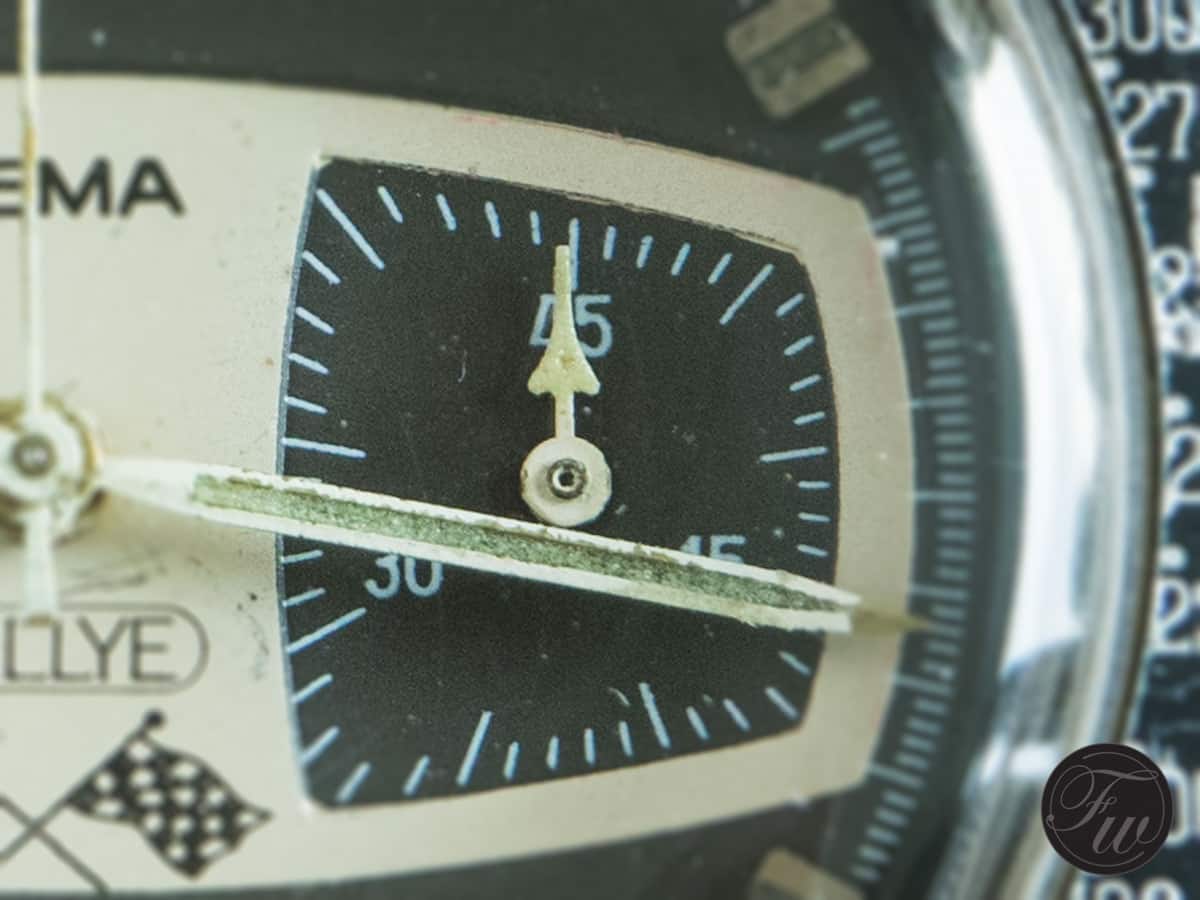 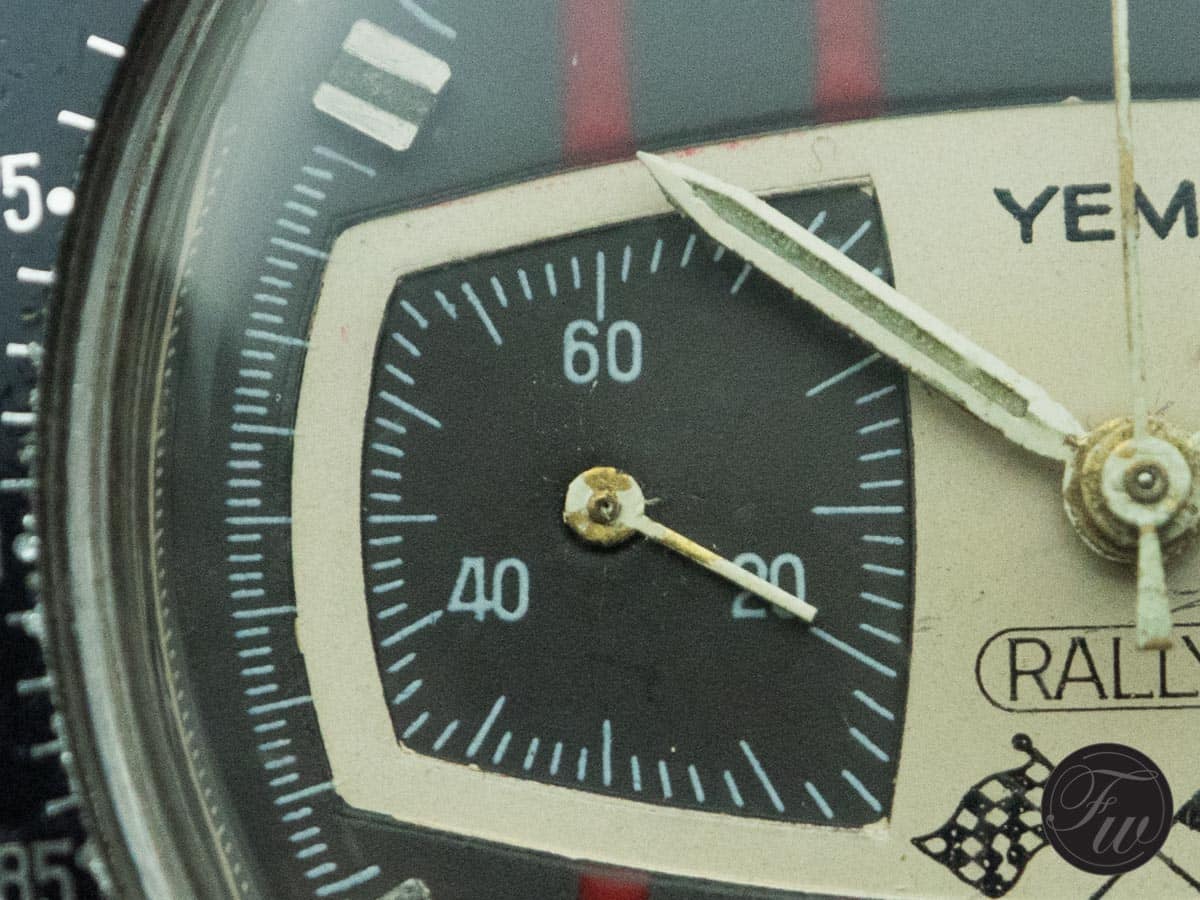 The subdials are made for the prologue of the seventies: funky, freely and a bit rebellious. Still it commits to the harmony on the dial: it divides the dial in perfect even pieces on the x- and y-axis. Despite this relative unorthodox shaped setup for the time, the legibility remains and it blends in seamlessly on the circle oriented dial. With a bit of imagination, you could say that the setup looks like a dashboard of a racing car. Again, kudos for the racing link. 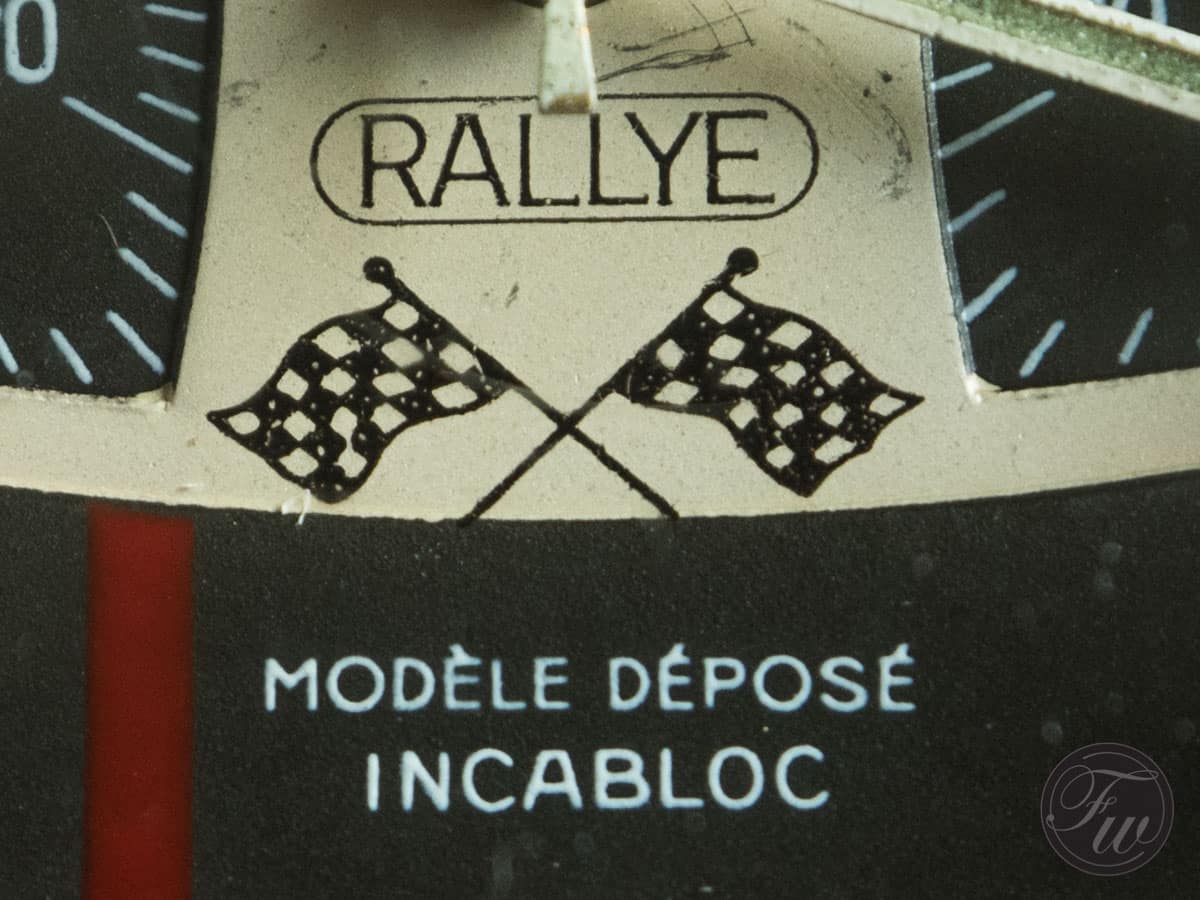 Definitely on of the most striking and playful details are the finish flags just below the center. A core-element in the Rallye setup which underlines the racing spirit of the watch again. While absent on some variations, I’ve spotted approximately 4 variations in terms of placement on the dial. In the horizontal middle we can spot them. Normally I don’t like elements which are placed without spacing between each other. But in this case I do like the fact that the flags are on the absolute bottom of the white  sub-dial region. 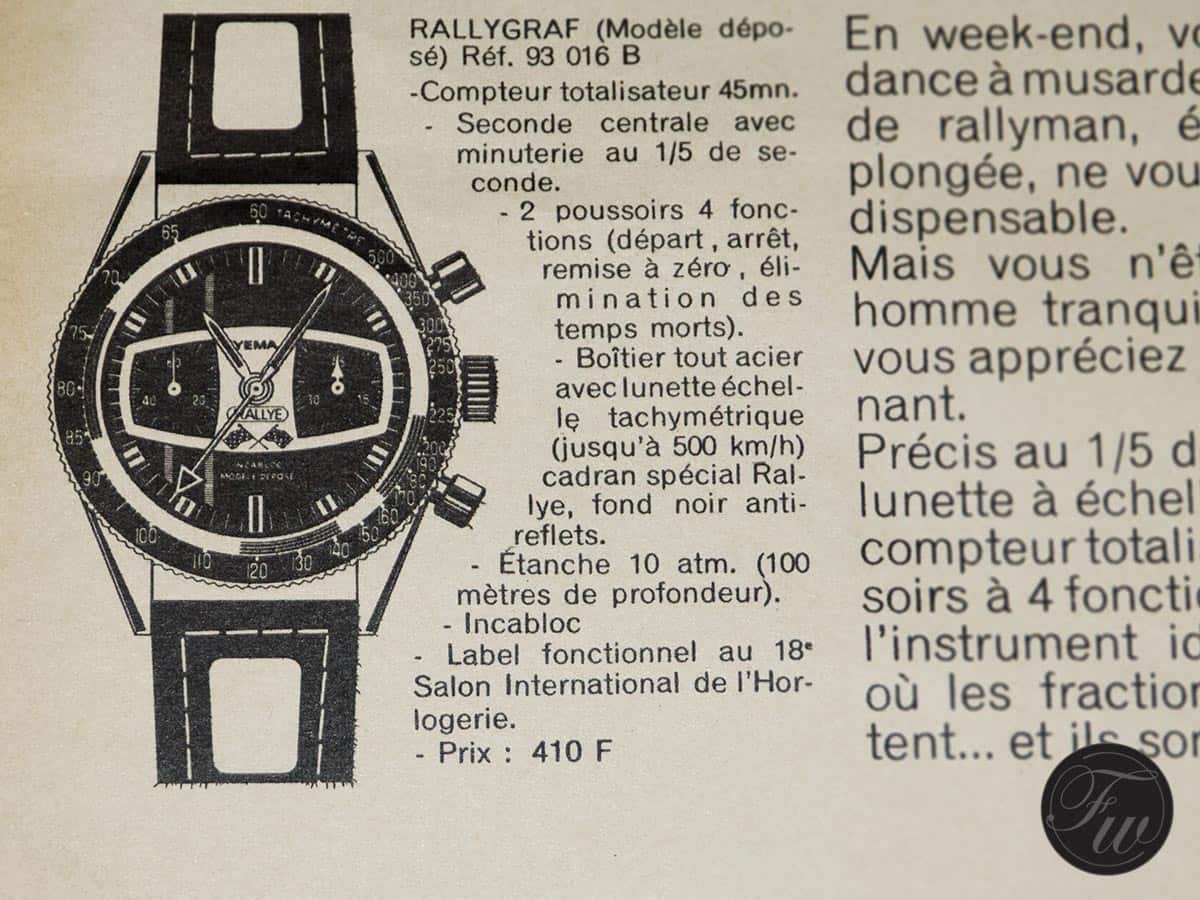 The two racing lines on the dial are subtle and therefor do not mess up the harmonious dial setup. In my opinion, this detail does keep things interesting and playful, without causing too much unbalance. It reminds me of the deep red striping accents on racing cars. 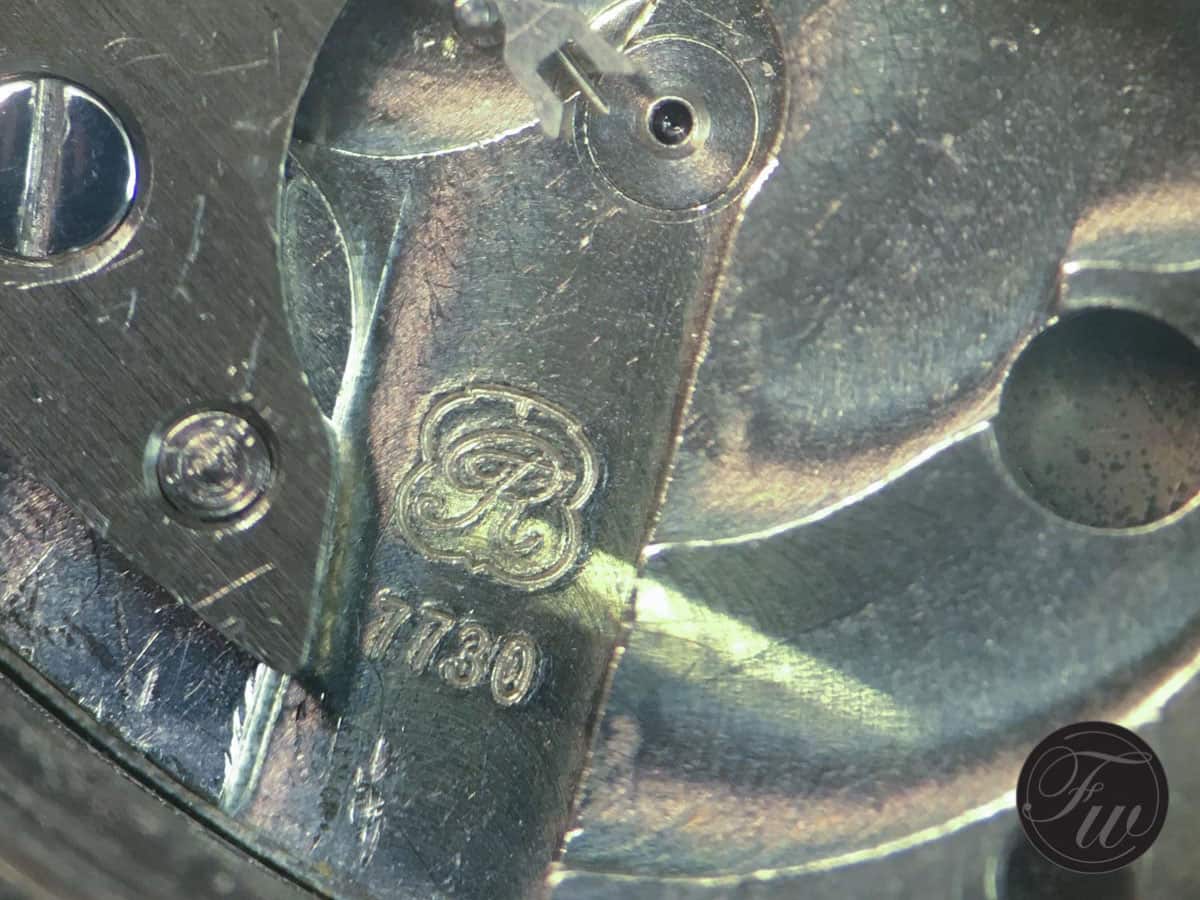 Valjoux stamps the 7730 mark and their logo on the movement

Yema used three Valjoux chronograph movements in the Yema Rallye. No extravagant movements, but true reliable workhorses. The movements are unsigned and therefore relative easy to service. A gentle watch for the wallet! Below a chronological list of the used movements. Do you have additions or know Rallye examples with a different movement? Please notify us!

I recently bought a Yema Rallye as a ‘project watch’. Below a picture. It has potential, but just needs a cleaning service and restoration without replacing original parts. I’ve spotted  a lot of dust under the plexi crystal and the chronograph seconds hand lume needs to be removed (as this hand was a ‘skeleton’ hand to begin with). Next weeks the watch will be restored by watchmaker Kalle Slaap. A Dutch watchmaker with a lot of experience in restoration of vintage watches. Curious? We will publish a full report of the restoration here on Fratello Watches as soon as everything is completed. So see you soon!

Thank you for your time and I hope you’ve enjoyed the race! 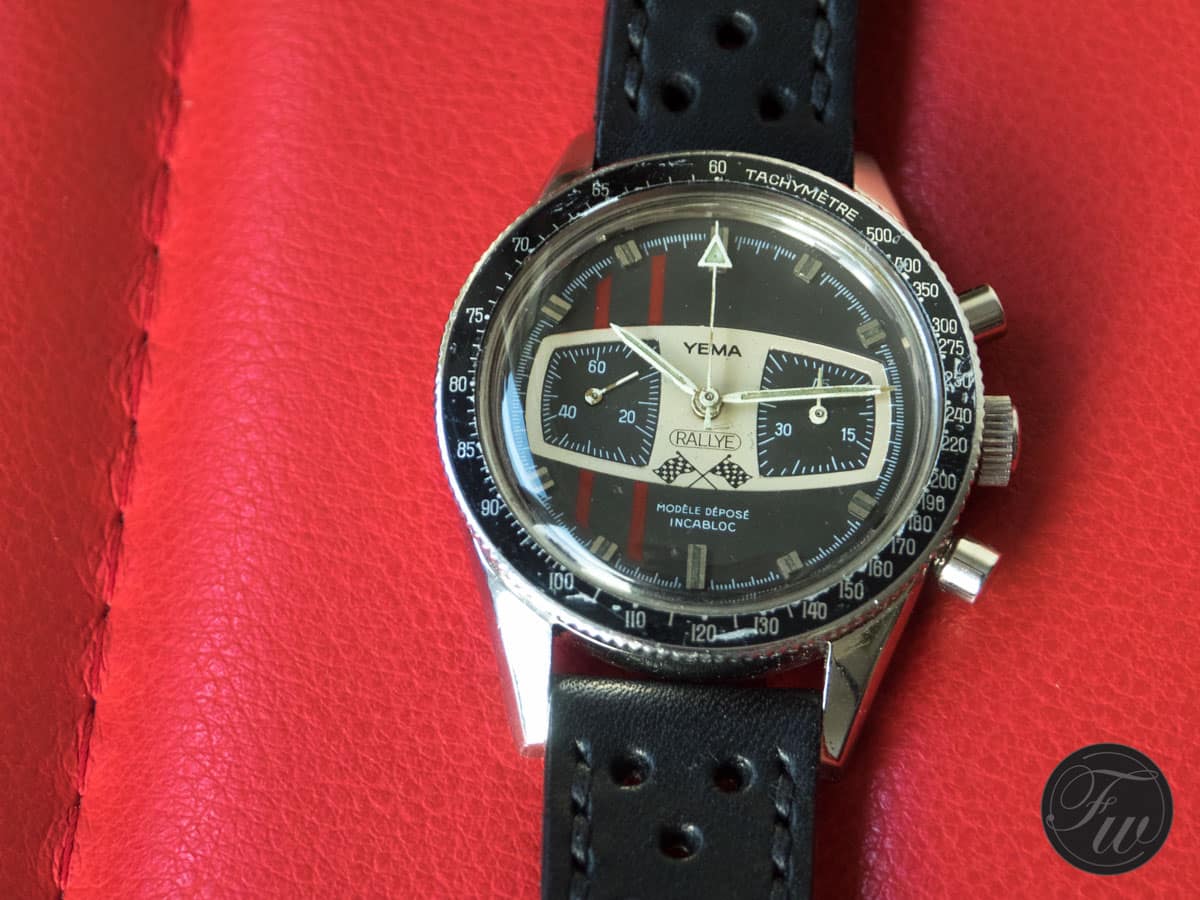