The last time I reviewed a Yema, the Daytona as it’s nicknamed, I came away with a rather lukewarm feeling. The watch was nice, but I likened it to a lookalike product; it’s close to the real deal, but somehow lacking in the details. Today, though, we focus on a different model, the Yema Rallye, and I’m delighted to tell you that this watch is far more worthy of praise. Furthermore, the model, in a slightly different format, has a real motorsports connection. #TBT returns from its recent travels to the distant lands of gold plating and smaller sized watches to bring you something a bit more customary. Now, let’s go check out that Yema… 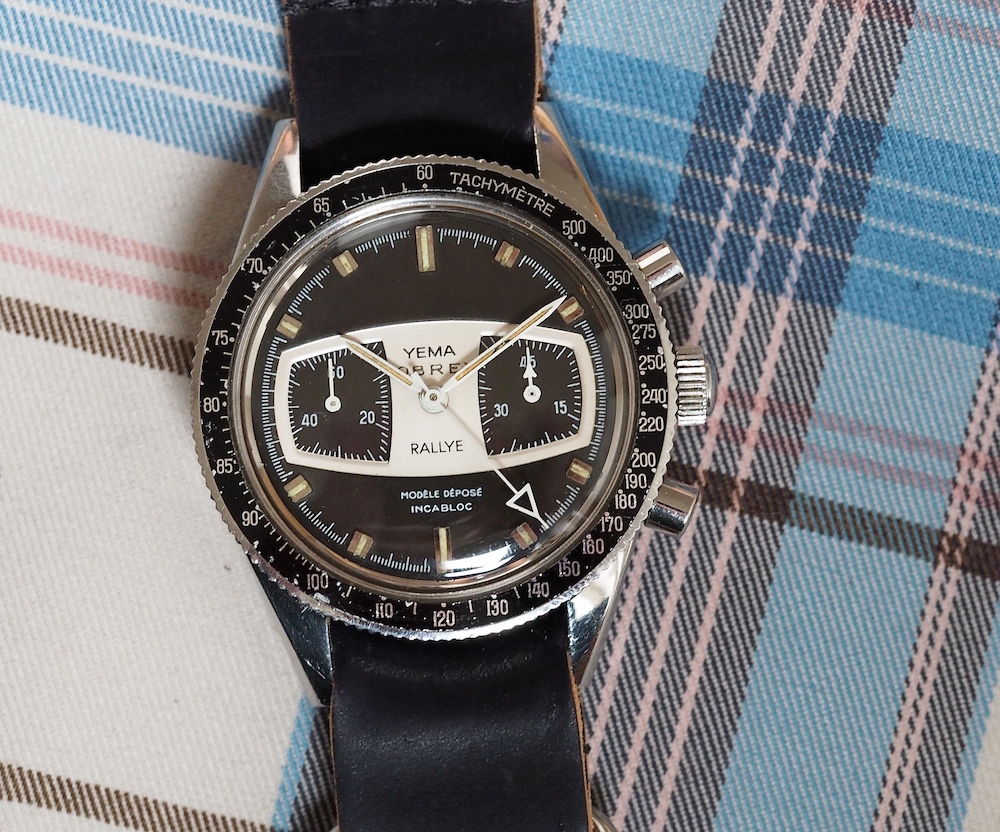 The proportions of the Yema Rallye, with its nearly 39mm of diameter and 19mm lug width are classic and pure late 1960’s

So, you’ll recall from the earlier article that Yema is a French brand. Within their range of chronographs, the company made some of the most colorful and interesting pieces during the 1960’s. This was especially true when it came to their different yacht timers and I invite you again to check out this fantastic site that highlights the wonderful variations on the theme. However, Yema also made chronographs for motor racing. Enter the Yema Rallye (and its USA export version branded as LeJour).

The Yema Rallye was likely introduced in 1969 and is a 2-register chronograph fitted with the lever action Valjoux 7730. It seemingly came in the early version you see here, a similar version per the ad above with red stripes and, later, in an “exotic” dial with wood grain around the registers that looks a bit like an old dashboard. 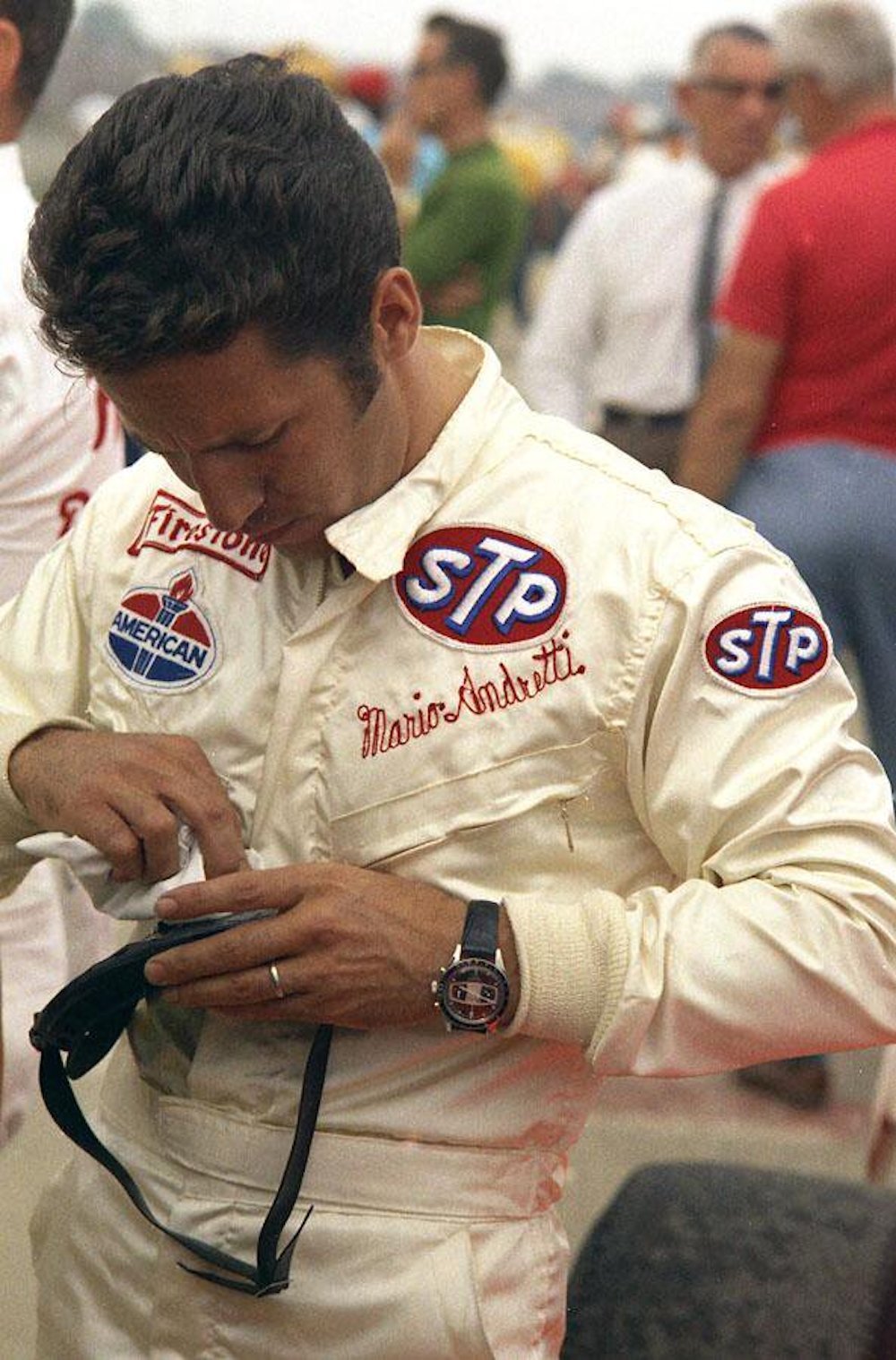 Mario Andretti seen with either a LeJour or Yema Rallye on the wrist during the 1969 Indy 500 – his sole win of the legendary race (photo credit: OnTheDash.com)

The Yema Rallye was seemingly worn by Mario Andretti

Mario Andretti is one of racing’s all time greats. He has the distinction of winning an F1 World Championship, the NASCAR Daytona 500, a class win at Le Mans, and the Indy 500. Andretti competed in the Indy 500 many times, until 1994, and came close to winning it on several occasions, but his lone win came all the way back in 1969. What was Mario wearing during this win? It seems, per the picture above from OnTheDash, he was wearing either a LeJour or Yema Rallye. Check out how the watch even matches his race suit! 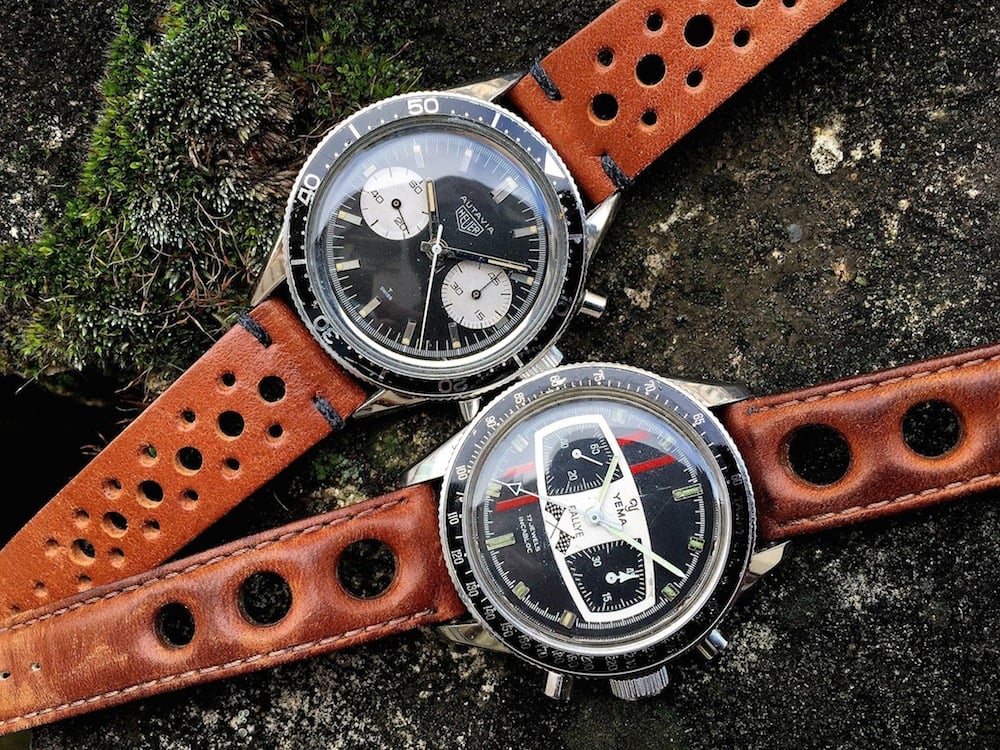 In a vintage watch-collecting world where we have an absolute frenzy over racing chronographs worn by Jim Clark (the Enicar Sherpa Graph and the Breitling Navitimer ref.806), Paul Newman (the Rolex Daytona exotic dial), the Jochen Rindt (Heuer Autavia 2446) and Andretti again (Heuer Autavia 3646), the Yema Rallye has somehow stayed quiet. Why is this? 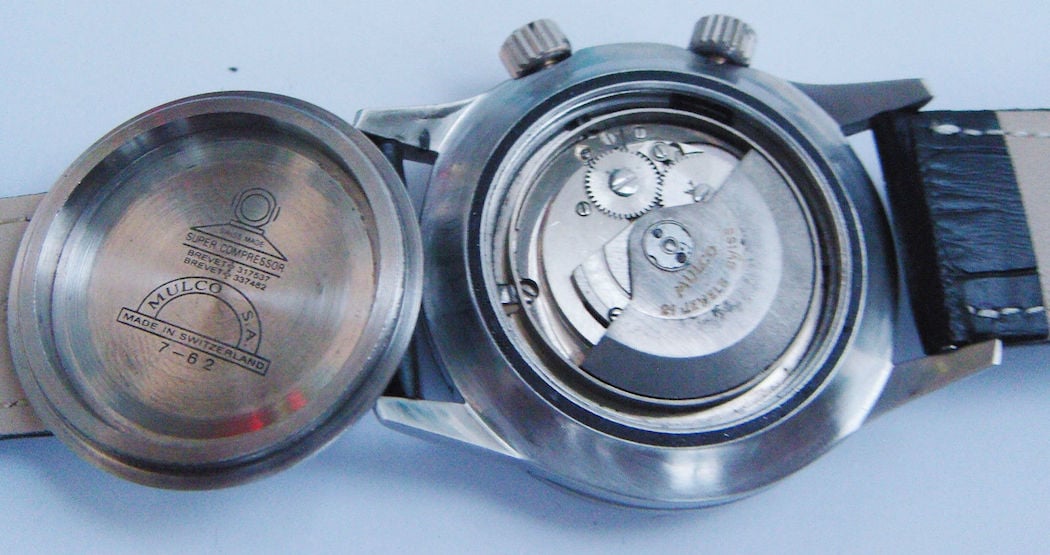 Perhaps the use of the more pedestrian movement within the Yema Rallye doesn’t help or could it be the somewhat whimsical red stripes found on most versions? I’m not sure, but when I learned of the racing association that Yema had with the great Italian-American driver, it sounded like a watch that I wanted to own. The model you see here, which is sans stripes, was on eBay for quite awhile, up until very recently, out of Italy and didn’t garner much interest due to its relatively high buy it now price of over $900. When it finally expired and the piece remained unsold, I asked a friend in Italy to contact the seller to see if a local transaction could be managed at a lower price. As you can see, it worked out and I’m really glad that it did because this is a surprisingly nice watch. 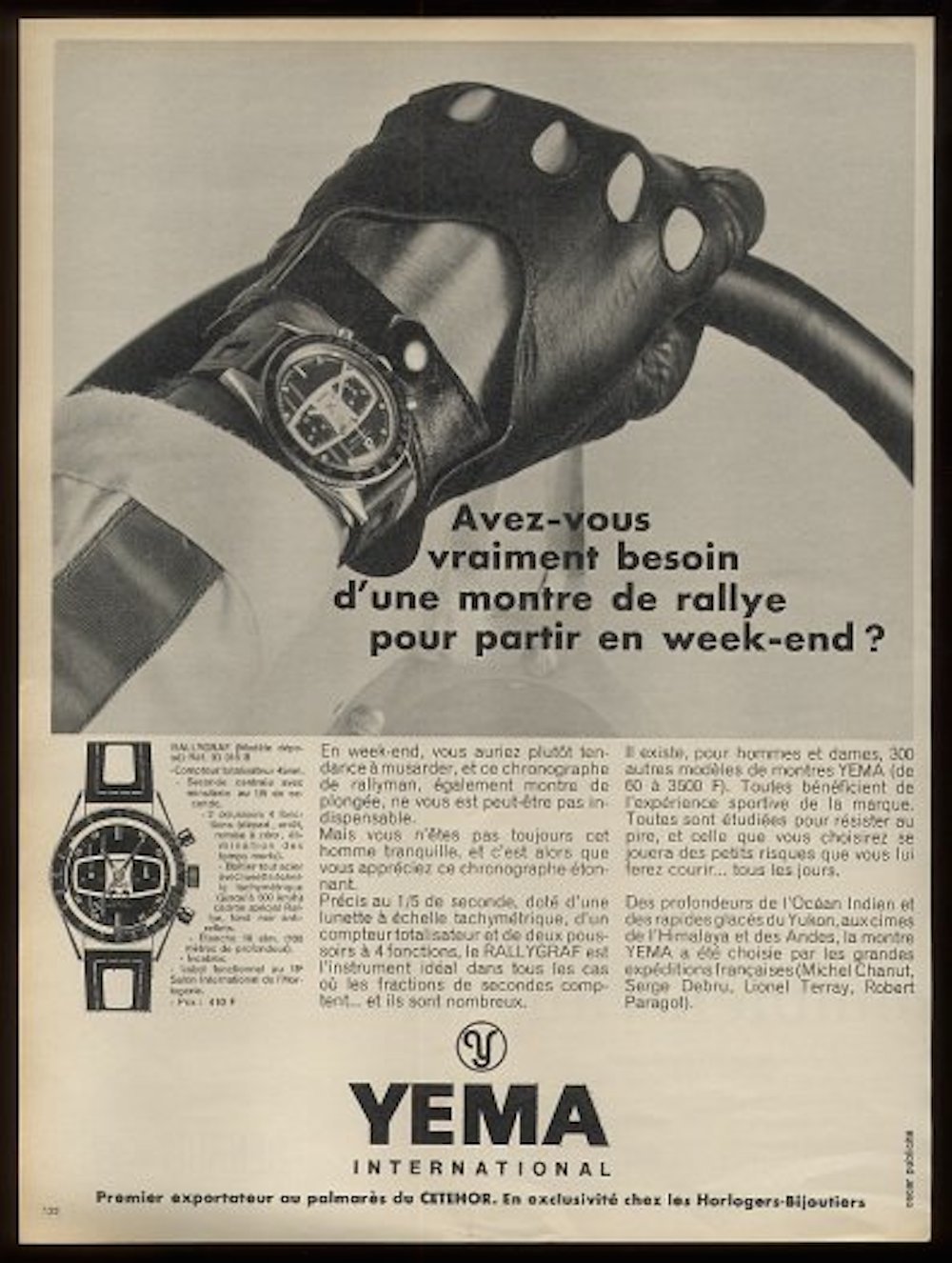 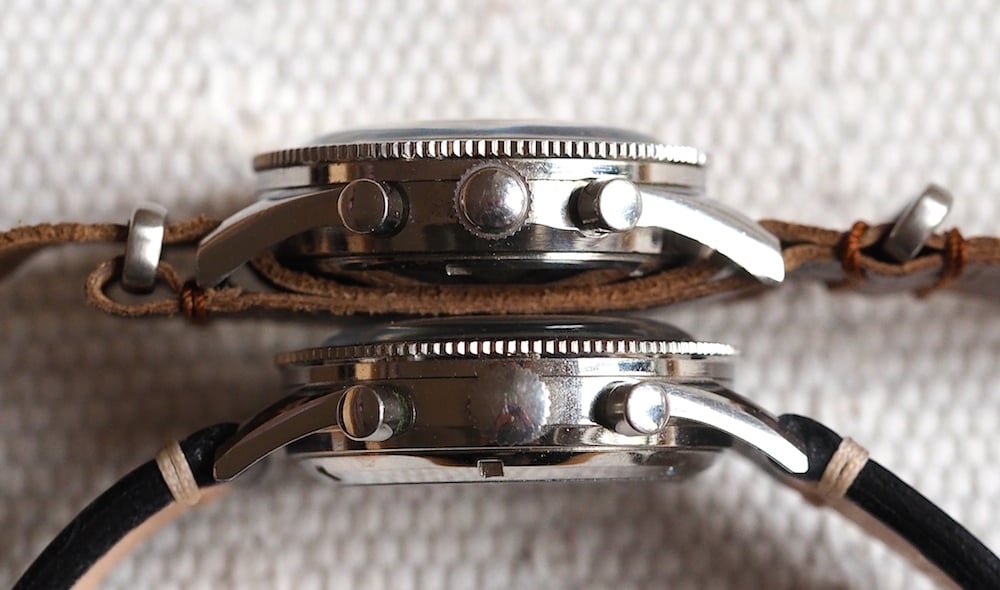 Another comparison of the Yema Rallye (top) and a Heuer Autavia 2446 “Rindt” (bottom). The crystal and bezel look identical. THe lugs of the Yema are a bit thicker and less sculpted.

The Yema Rallye comes in at roughly 39mm with a 19mm lug width and uses a case that is very similar to the Heuer Autavia 2446. In fact, save for the fact that the case’s chamfers aren’t as well designed, its “feet” are a little thicker, and the bezel is non-rotating, it’s the same size. 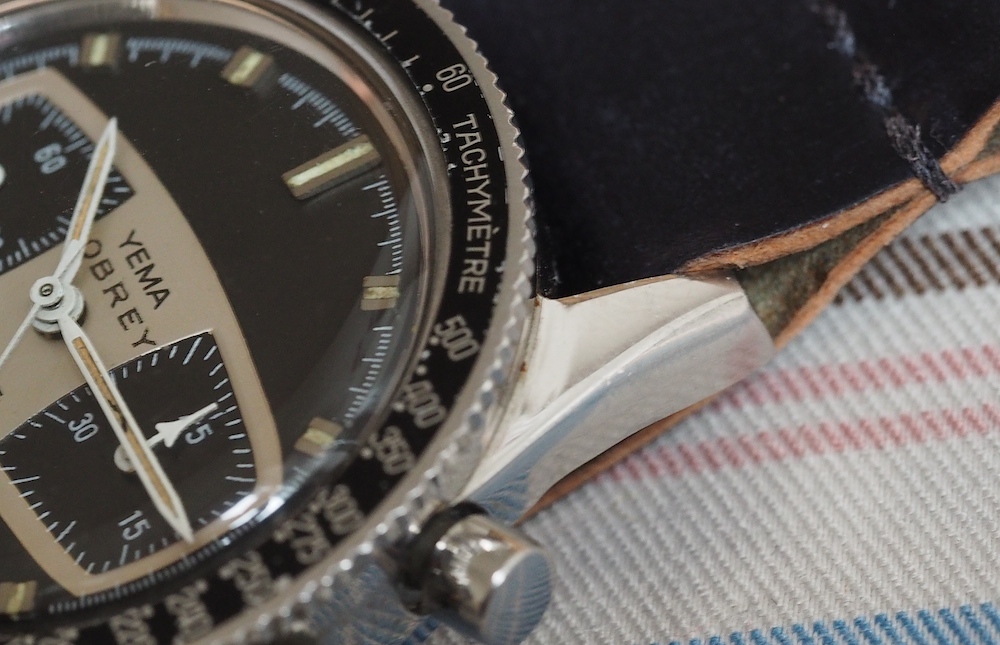 I’d even venture to say that it might have shared the basic stamping die used for the Heuers by whatever company was sourced. Taking a look at the crystal and the bezel height, the two watches show as identical. The Yema features its typical crown with table surface on its face and, thankfully, unlike the Daytona, has pushers that show their posts. In other words, they don’t look too small for the case. Of course, the dial and bezel differ greatly from that of an Autavia. 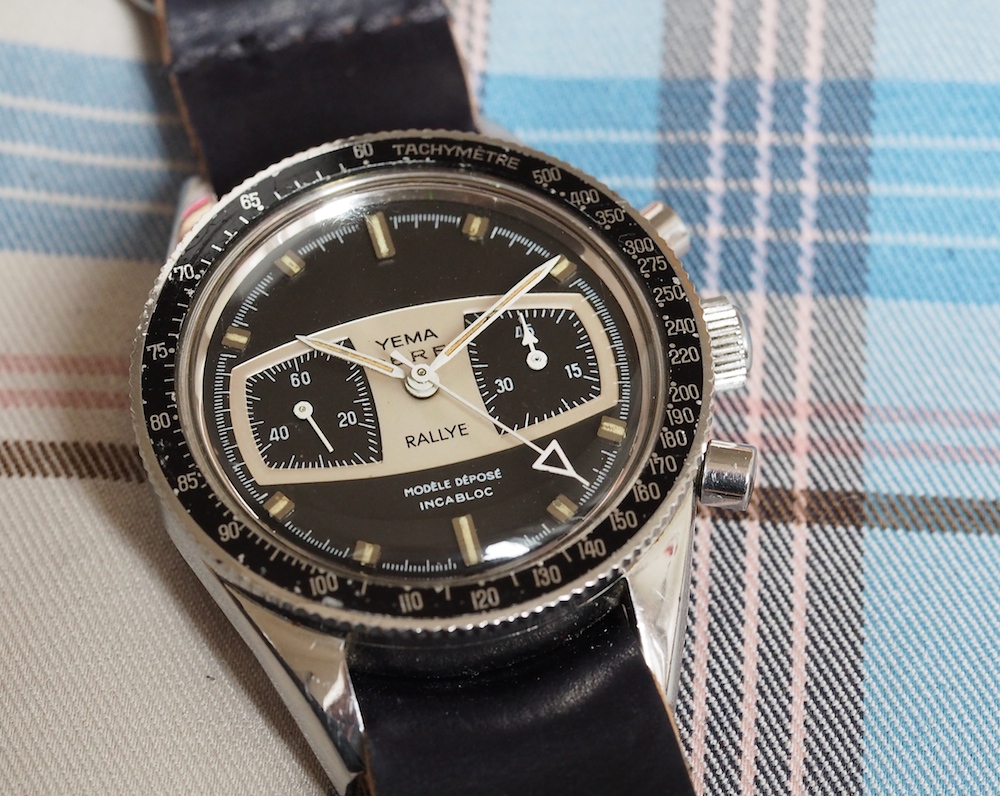 While this Yema Rallye has a touch of wear to the bezel, one can see a “Dot Over Ninety” tachymetre scale. This sits inside a high quality, finely knurled bezel. The inlay itself is a nice attribute that should interest a lot of collectors who fawn over such a detail on Omega Speedmasters and Universal Geneve Compaxes. The dial, in this version at least, is relatively subdued save for a large white/silver band around the subregisters. Here again, I’d guess that a dashboard was the intended design. Sub registers are clear with differing hands – a pointed arrow on the right – and are sunken below the large band. 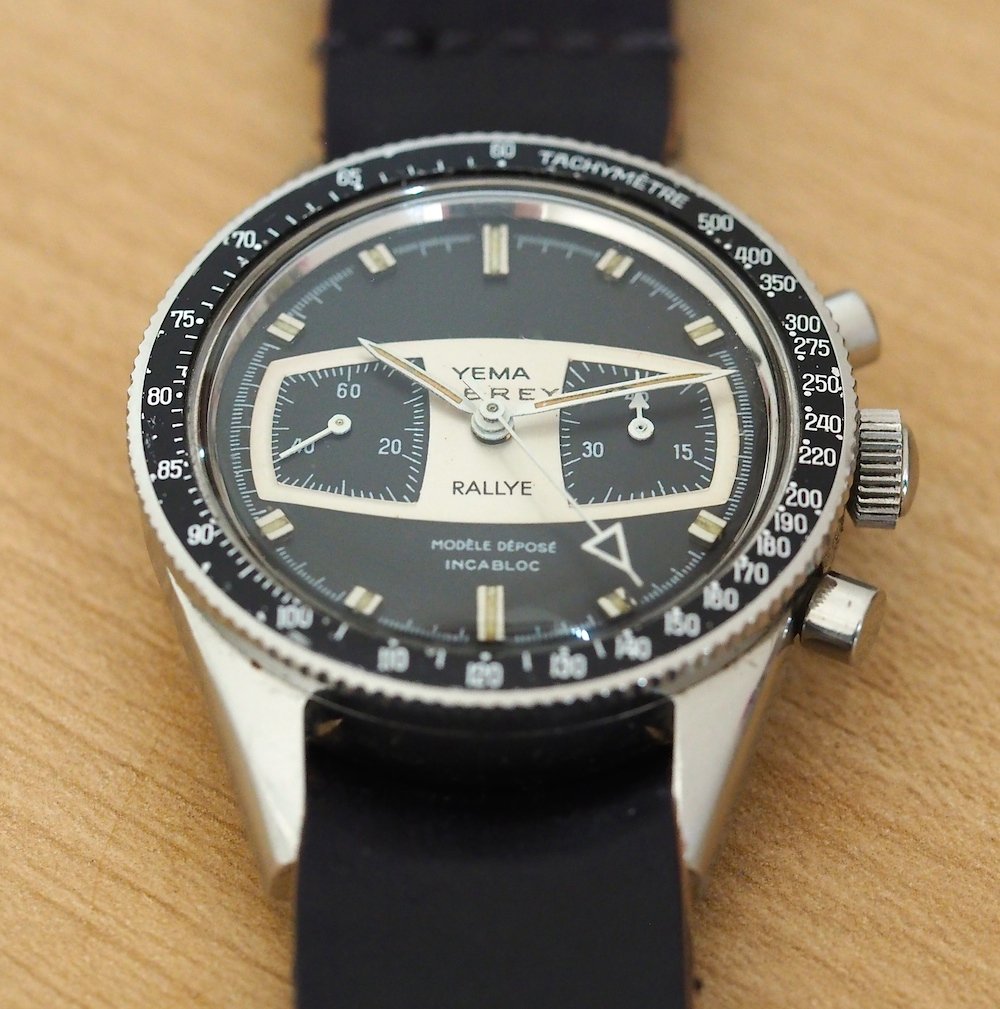 Applied hour indices with a lume stripe are nicely set between a minutes chapter ring. The central hands are very slim and are done in white with tritium inside. Interestingly, the central chrono hand has an unfilled arrow-shaped tip. This detail is really the only nod to the creative kookiness that often accompanies vintage Yema chronographs. 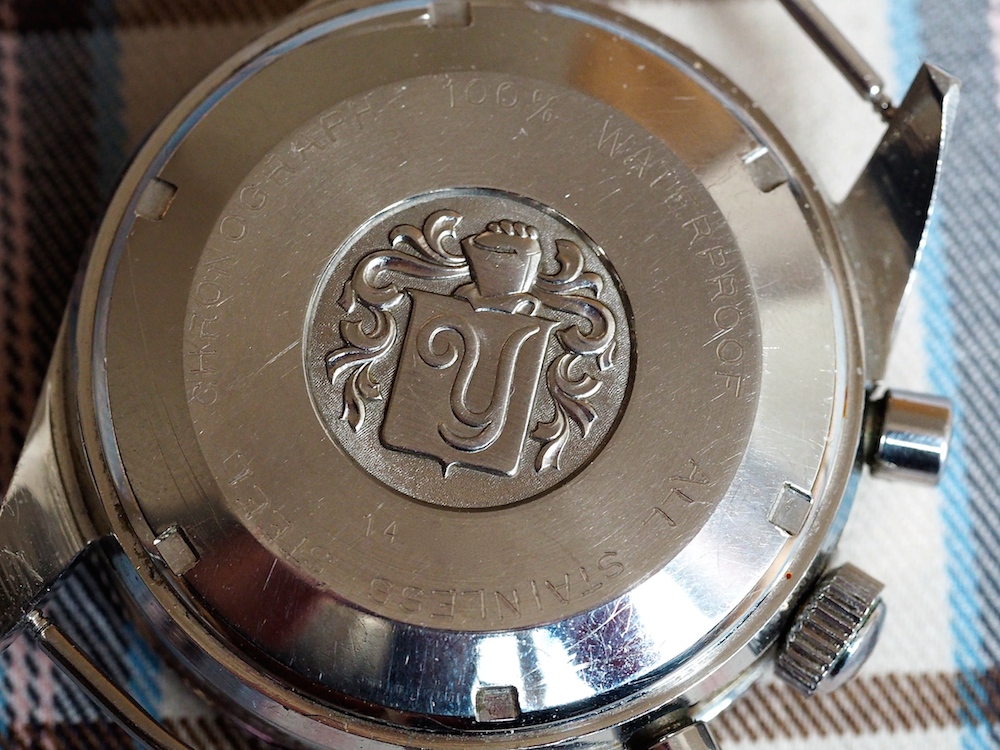 The case back of this watch contains some serious bas-relief and shows the Yema crest while being surrounded by some optimistic verbiage, “100% waterproof.” 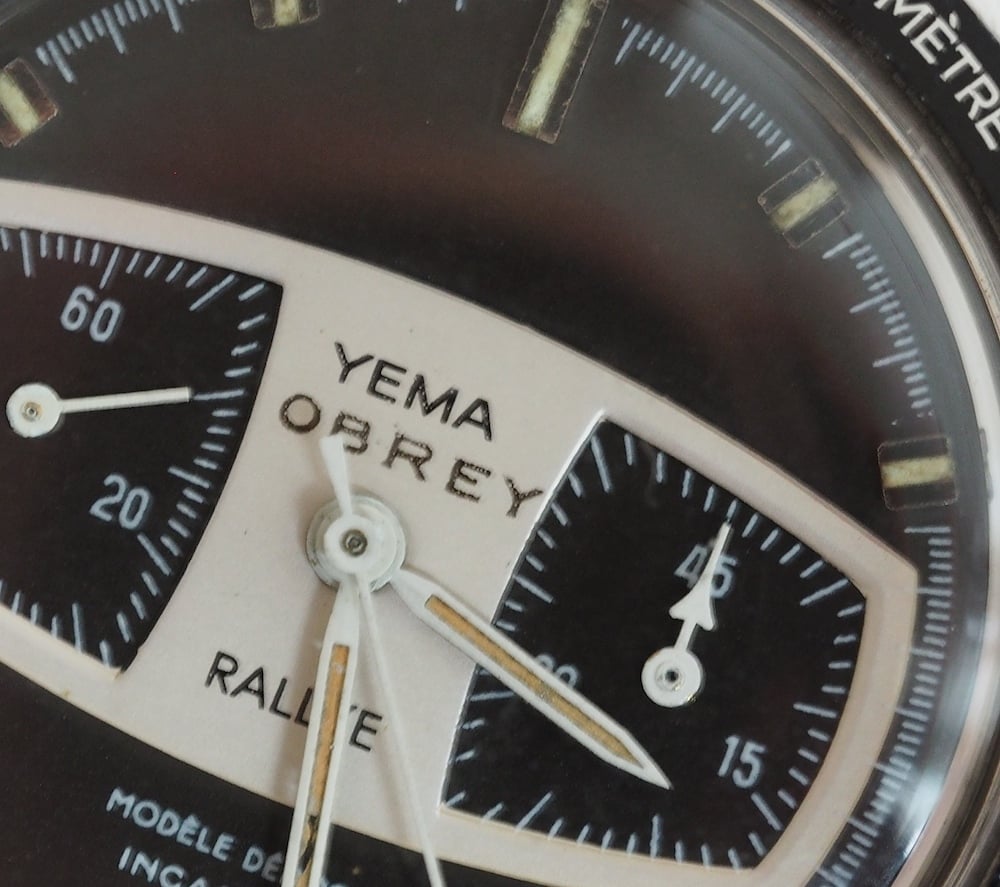 “Obrey”…what’s in a name? Is it the high end jeweler in Paris?

The quality of the Yema Rallye is impressive

Overall, the Yema Rallye is a far nicer watch than their “Daytona”. The details are much finer and the design allows it to stand on its own. It wears much like an Autavia, which translates to “great”! This size of watch is really perfect for about anyone and the watch works with all sorts of strap colors and types. I should mention the odd name, “Obrey”, on the dial. It’s not exactly centered, which is a bit odd and after the fact, but it led me to do some research. What I found is that Obrey are high-end jewelers in Paris, France that make their own line of watches. Their watches tend towards the jewelry side of things and seem to focus on sterling silver construction, so this makes an association with this rather stark piece an oddity. Then again, this was the 60’s. Frankly, I can’t find any proof to directly tie this watch, or any other Yema, to the house, but it’s possible that it was sold at the store or perhaps distributed by the company in a Tiffany-like manner. Or, maybe it’s a common name in French? If anyone knows more, I’d love to hear from you! 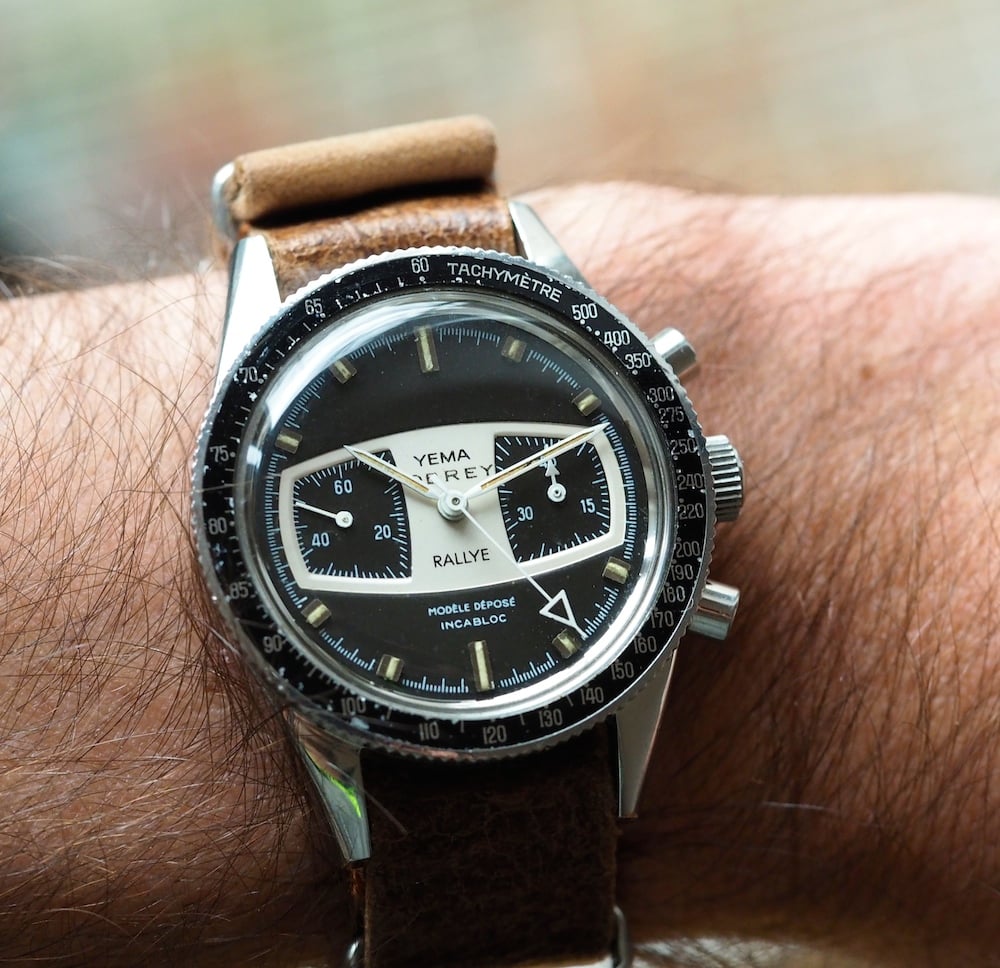 The Yema Rallye on the wrist

Yemas have a devout following, especially amongst French collectors. My understanding of French is exactly as good as Google translate allows it to be, so I mostly do picture browsing on the French forums such as chronomania. One can find an amazing assortment of beautiful Yemas there and the group seems very open to helping members with questions, but I’m not so sure how English passes as a forum language! I’d invite you to have a look for ideas as Yemas and LeJours really do offer some exciting, and relatively cost effective options for the collector. 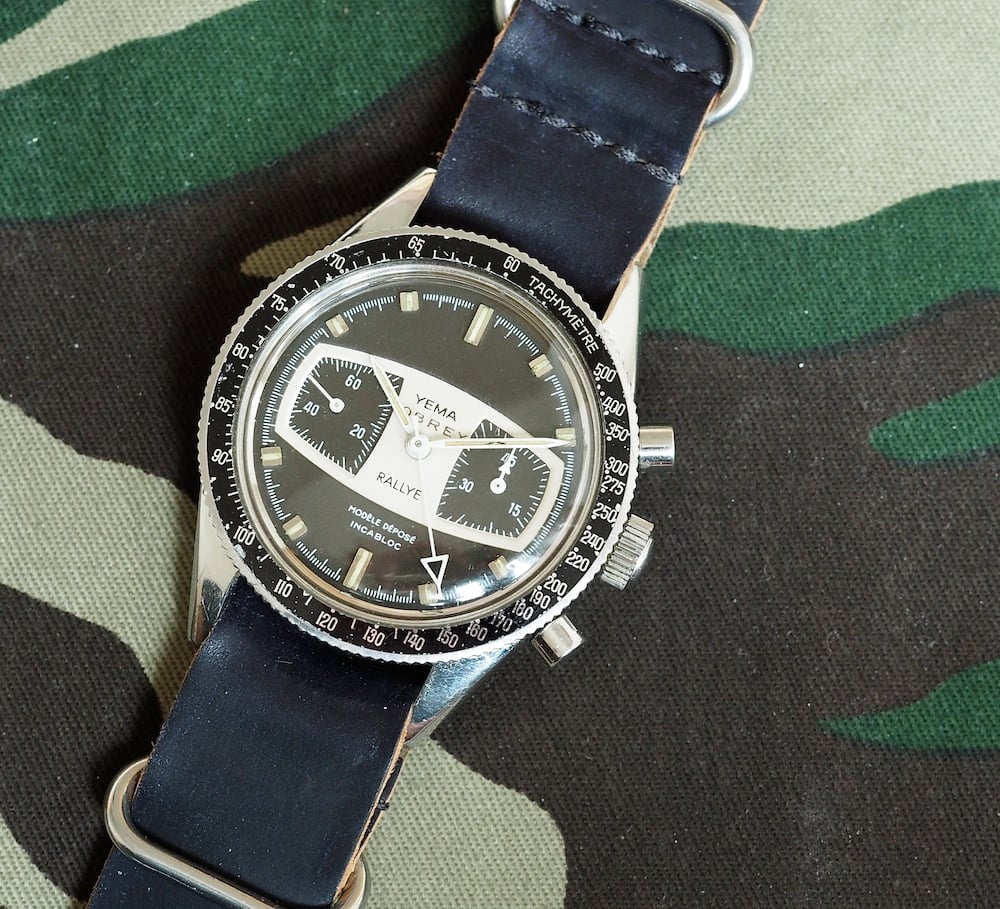 The Yema Rallye represents great value in a hot market

Buying a Yema Rallye is not quite as easy as in the past. Yes, these watches have fallen prey to the uber-hot vintage chronograph market, but they do come up with relatively good prices. I’d budget anywhere from $600 – 1,000 right now for a solid piece by either Yema or LeJour. Do be on the lookout for incorrect bezels and relumes, but realize that the lume on the hour indices does often go green. Dials come up now and again as well hands, but I rarely see bezels. Movements are unsigned on the bridges and make for an easy repair. I have seen examples online where the central chrono hand is filled in, so perhaps the company issued several variants over time. The same can be said where the Yema logo is on the dial at times. A good tip is to check the French forums as Yemas come up for sale there more frequently. 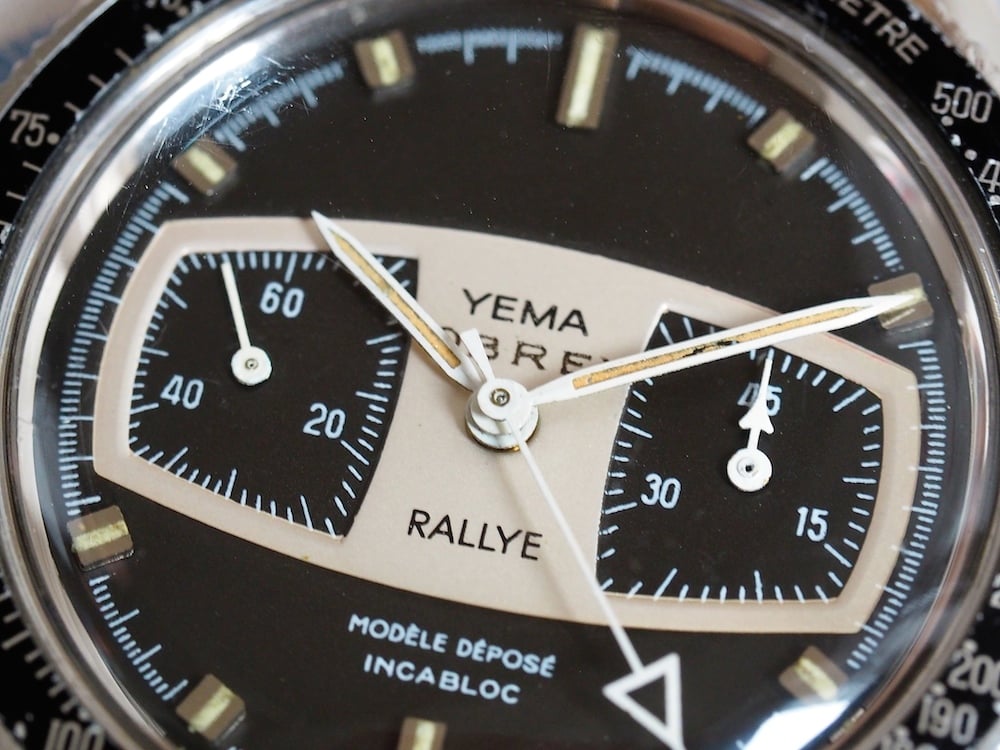 The Yema Rallye…an affordable piece with a real motorsports tie

Thanks for stopping by to check out the Yema Rallye. It’s rare to find a nicely designed chronograph with a true motorsports tie in for such little money. Let’s be thankful that this watch has somehow avoided the curse of overheated demand. Add to this a bulletproof and easily serviced movement and it’s a real winner. As always, enjoy the hunting and until next week…