The Hanhart Pioneer One collection just got better, with this new blue version of their military-inspired watches.

If you are a friend of the brand that resides in the Black Forrest, you are probably familiar with the Pioneer models. They are the most authentic in looks as far as the history of Hanhart is concerned. Hanhart was among the brands who supplied chronographs for the German Air Force during World War II. Those vintage pieces are very sought after and hard to come by these days. Partly because they are military timepieces, partly because the king of cool, Steve McQueen also wore one.

Steve McQueen and his Hanhart 417ES

Hanhart has three major collections, but the military-inspired one, named Pioneer takes inspiration from these 1940s chronographs. I reviewed the Pioneer Monoscope a while ago. This time I’m going to look at another Pioneer, a time-only version. 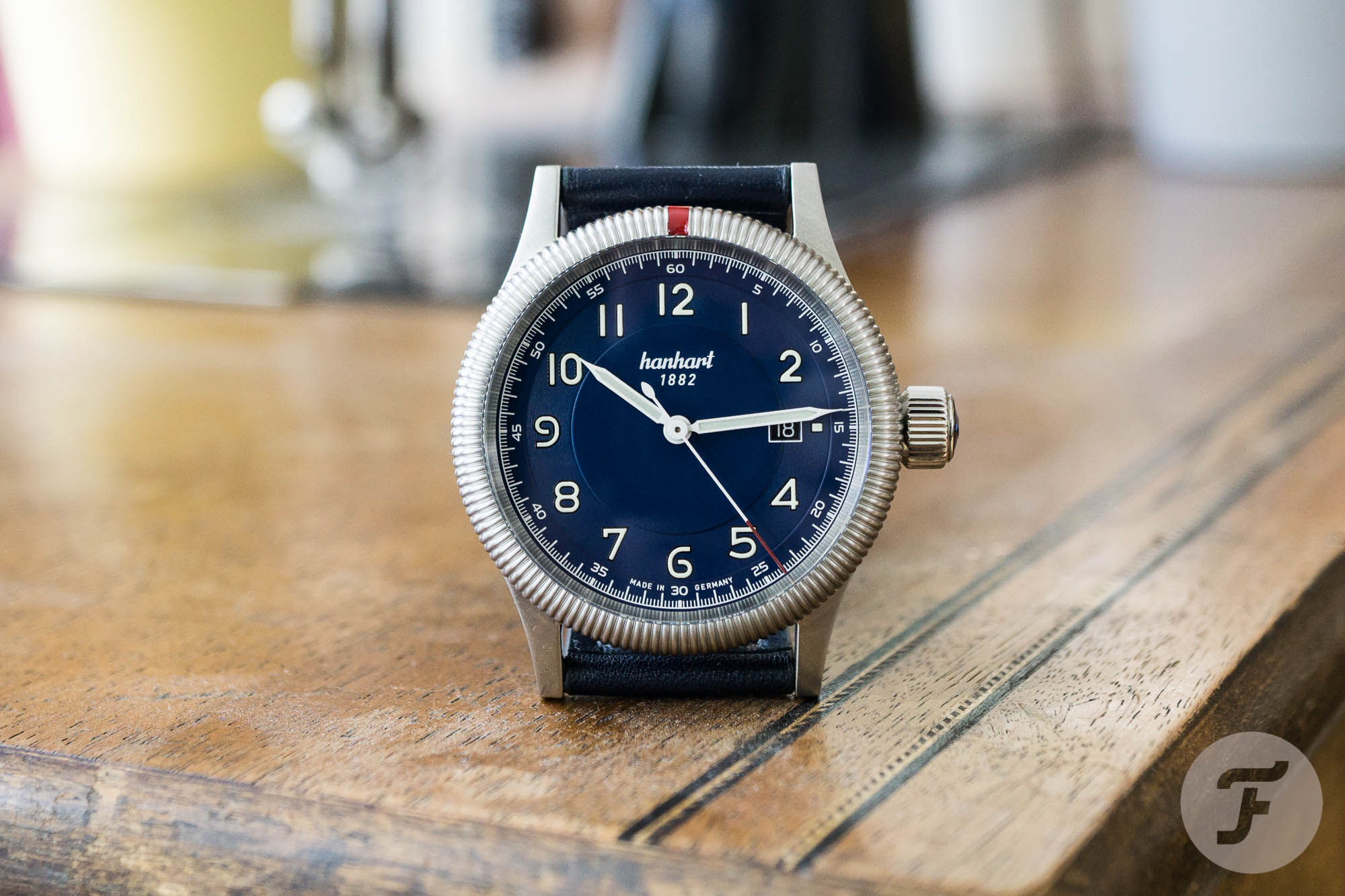 For a small company like Hanhart, its Pioneer collection is rather big. You can choose from a number of watches both chronograph and time-only pieces. You have 45mm two-pusher (Pioneer TwinDicator) and single pusher (MonoScope) chronographs. The same 2 chronograph types in a smaller 42mm (TwinControl and MonoControl) and an even smaller 40mm (Pioneer Mk I, Mk II and TachyTele) case all with a vast variety of dials. Then you can find some time only pieces, like the Preventor 9 or, the subject of this article, the Pioneer One family. To me, this is the simplest Hanhart out there, a really cool watch with a vintage vibe in a modern interpretation. The Pioneer One collection comes in 4 dial colors; black, grey, white and blue. While some, like the black or white, look more vintage, the blue is actually a pretty modern-looking timepiece. Despite its many vintage design elements. 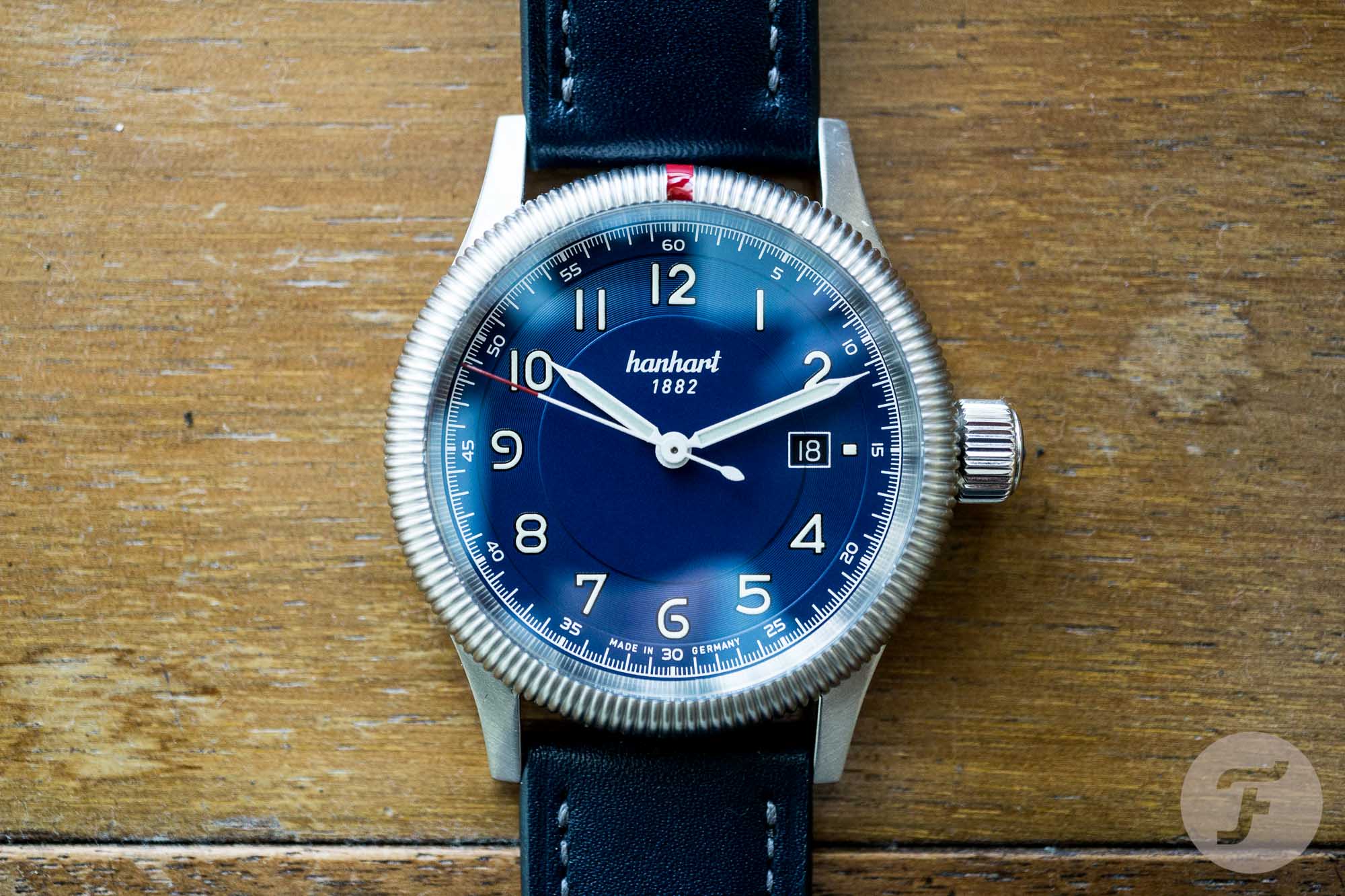 The case looks just like the chronograph versions minus the pushers. It is 42.5mm wide and 12.5mm thick albeit it says 42 and 12 on Hanhart’s site. No big difference but it’s worth mentioning. The case is mostly brushed, as you’d have with a military (- inspired) watch, only the underside of the case has shiny, polished surfaces. It is steel, as all Pioneer One watches are. The two most prominent features of the case are obviously the large crown and the fluted rotatable bezel with the red marking. Needless to say, both features are nods to the vintage chronographs. Not sure why a time-only watch has a bi-directional bezel it has no use other than being a design element. It does no harm to the watch though, actually even ads some character to it. The large crown isn’t disturbing unless you wear your watch further down on your wrist. 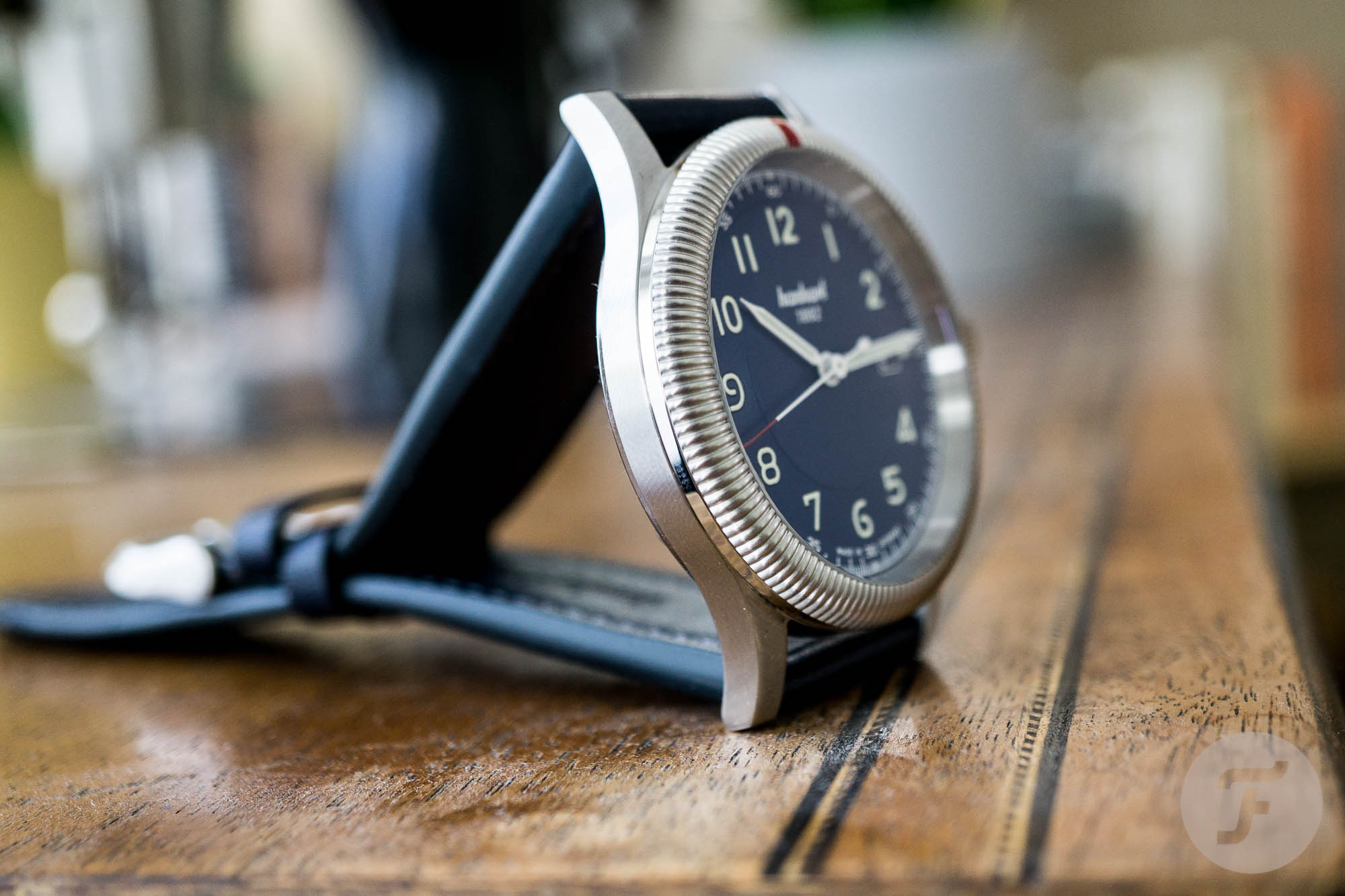 The back of the Pioneer One just as simple as the front of the timepiece. There’s a crystal in the middle through which you can admire the movement and the black Hanhart rotor, a feature of most of their timepieces. The back is screw-in making sure no water gets into the case, which is water resistant to 100 meters. Unlike many other brands, the Hanhart Pioneer One does not have the whole technical sheet engraved on the back. One feature is worth mentioning though, and that is the inscription “Made in Germany”. It proudly proclaims that the watch is coming from Germany, as it has been the case with Hanhart since 1902 when the then-Swiss brand was relocated to Germany. 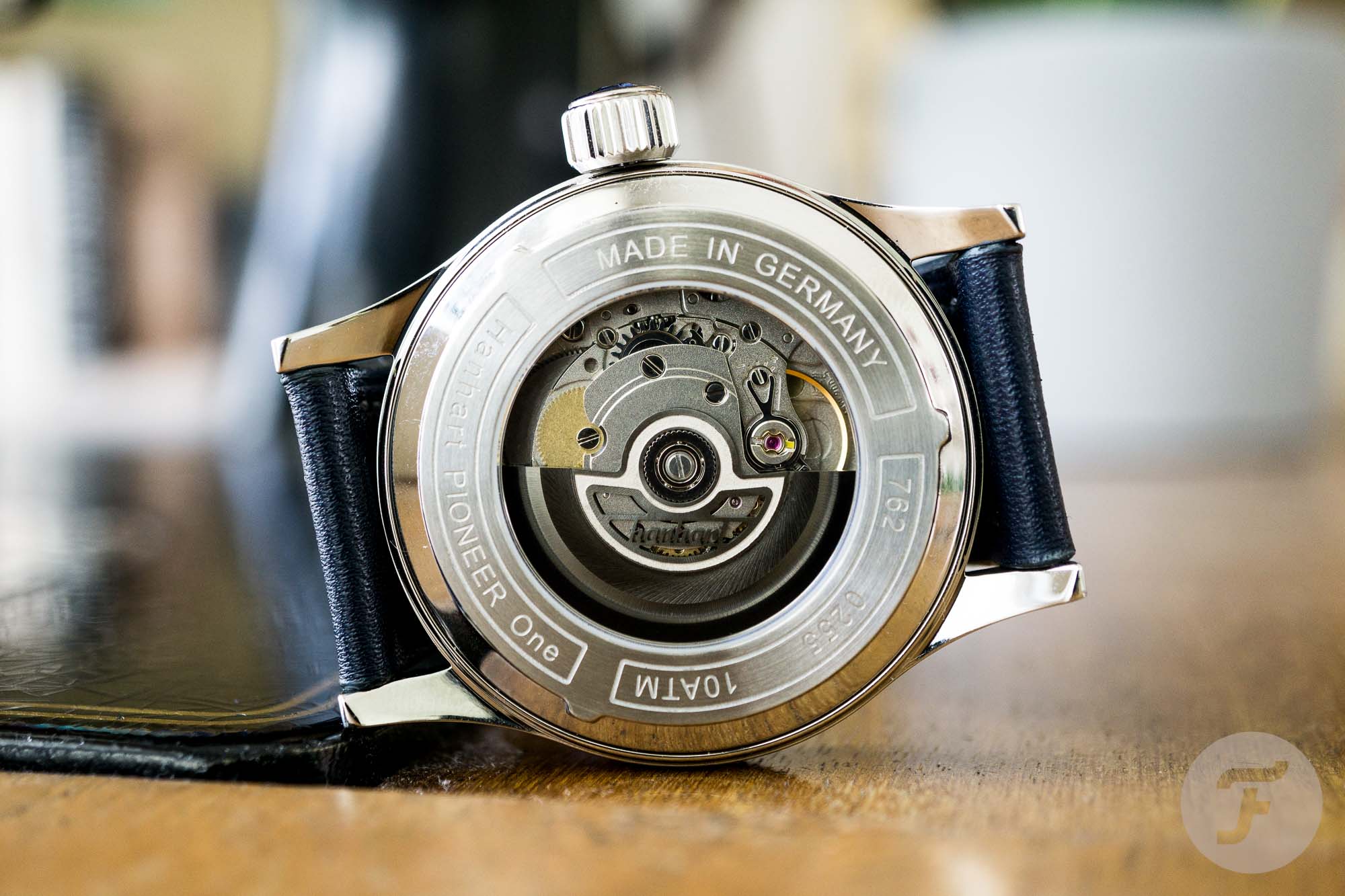 Blue is the new black

It seems that nowadays more and more brands use blue as their dials’ base colors. Whether it is a trend that will die out or a way to replace black I’m not sure. I love the looks of deep blue dials; they have a special shine that black hardly does. But of course, black dial watches are and have always been the first and only versions for most brands. Either way, the blue on this Pioneer One is a truly magnificent tone. It is deep enough to look black from certain angles. However, when the light shines on it, that’s when its true deep blue color is revealed. As far as the design goes, the layout is rather simple; large Super-LumiNova coated Arabic numerals all around, small printed minute track and a date aperture at 3 o’clock. White pencil hands make the watch easily readable also with lume coating. 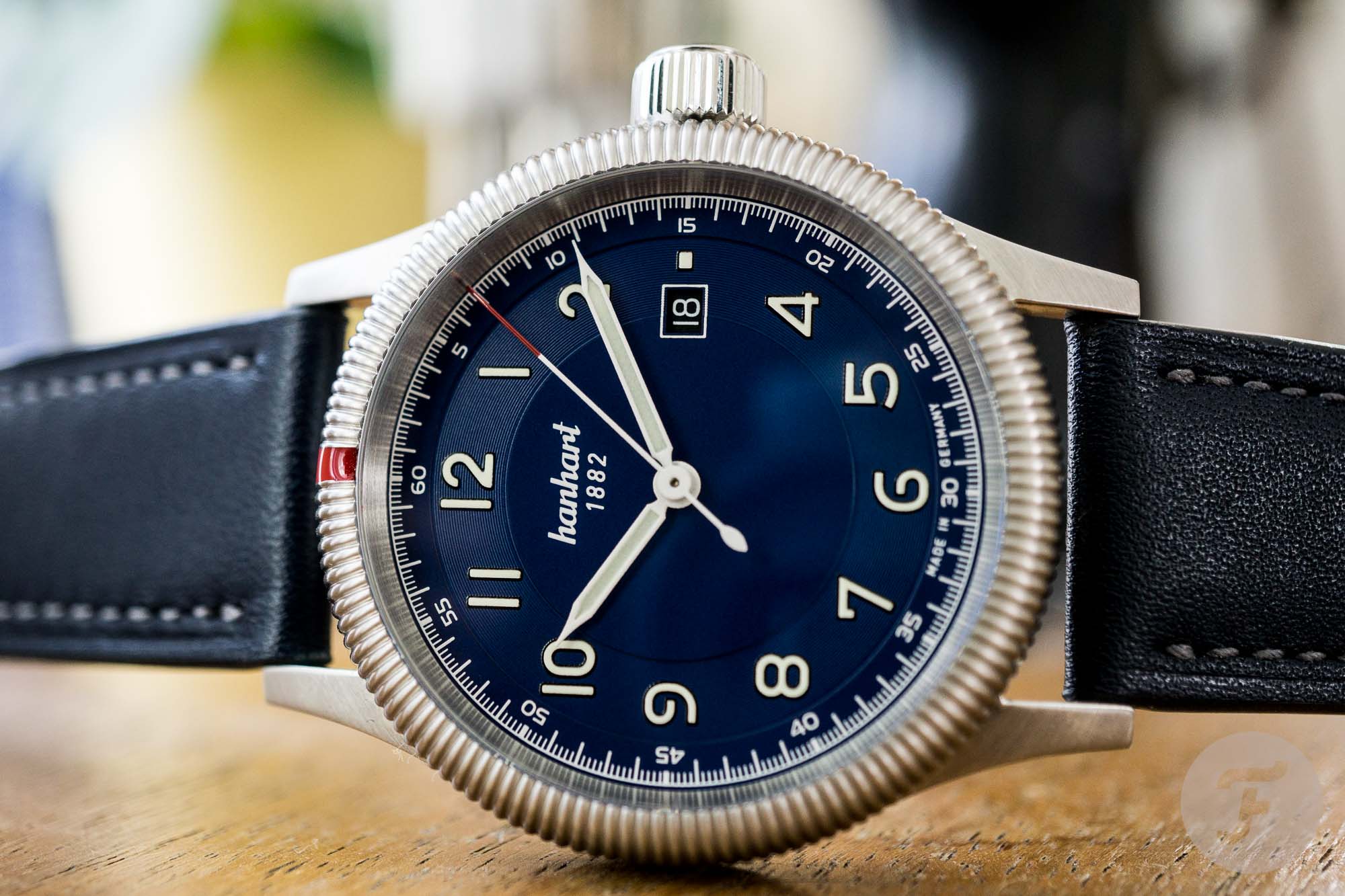 The tip of the second hand has the same red paint as you’d find on the bezel. Needles to some also connect this to the vintage models. While I have seen many chronographs from that 40s and 50s with a red marker on the bezel, none (or I should say 95% of them) came with a red tip second hand. It is a design feature on the modern timepieces. A subtle detail that gives a tiny splash of color to the watch. The logo is Hanhart’s vintage font version with the year of establishment (1882) underneath it. just like on the back of the case, at the 6 you can also see the Made in Germany marking. The watches come from a small town in the Black Forrest, where the Hanhart headquarters is. I visited them a while ago, you can read all about that trip here. 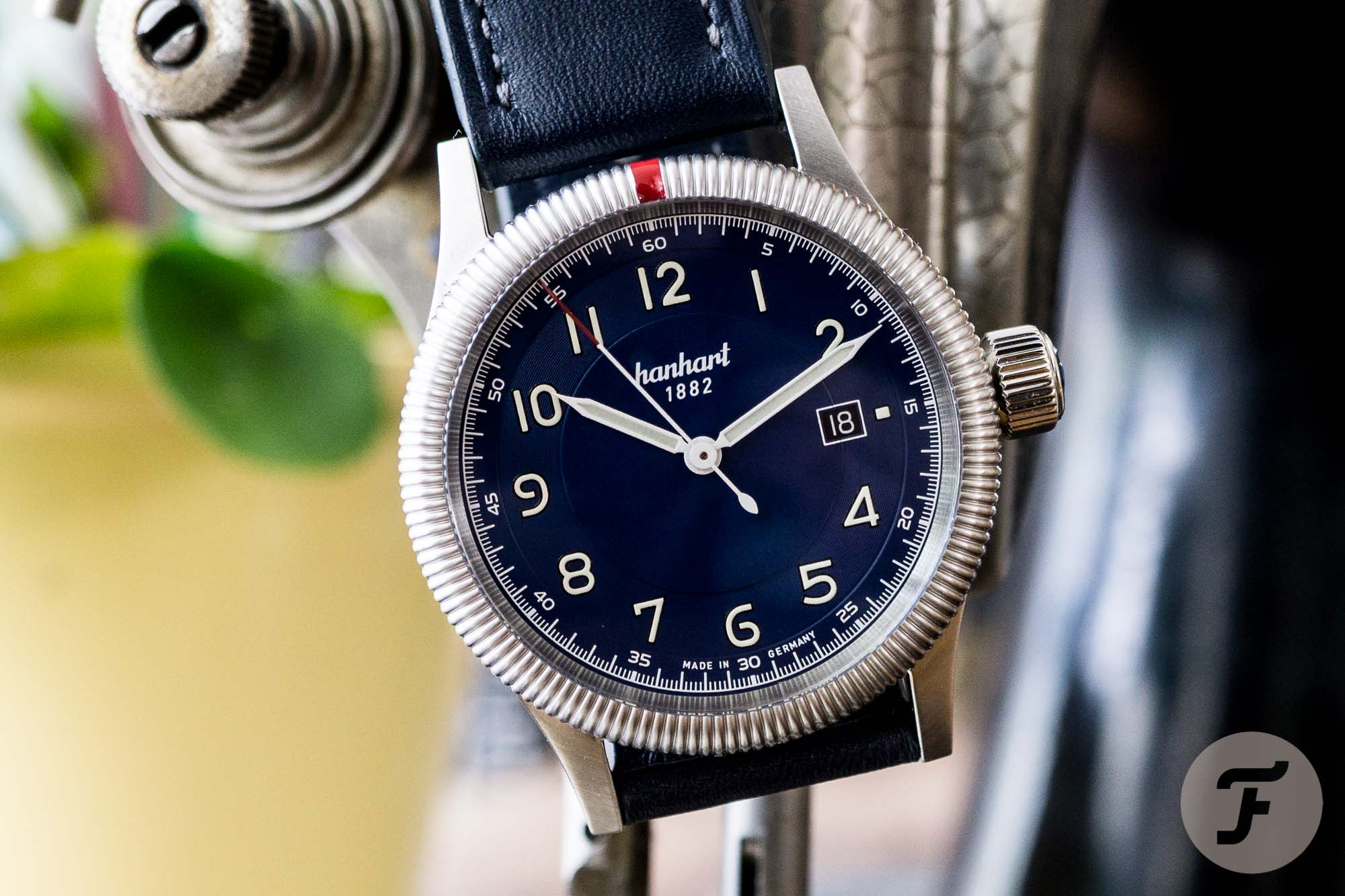 Albeit the Pioneer One comes from Germany, the movement inside is Swiss. Hanhart assembles each and every watch in their factory in Gütenbach. However, their movement supplier is Sellita, in Switzerland. The caliber inside the Pioneer One (blue) is the SW 200. It is a 26-Jewel self-winding movement with about 38 hours of power reserve and 28,800 Vph. Obviously, it is a time-only caliber with a date feature something that many brands don’t use. As the Pioneer One is a vintage-inspired but modern timepiece they kept the date. If we take a closer look at the dial, we can see that there is a step, a larger circle in the middle of the dial. The date window aperture cuts right into this round raised surface. 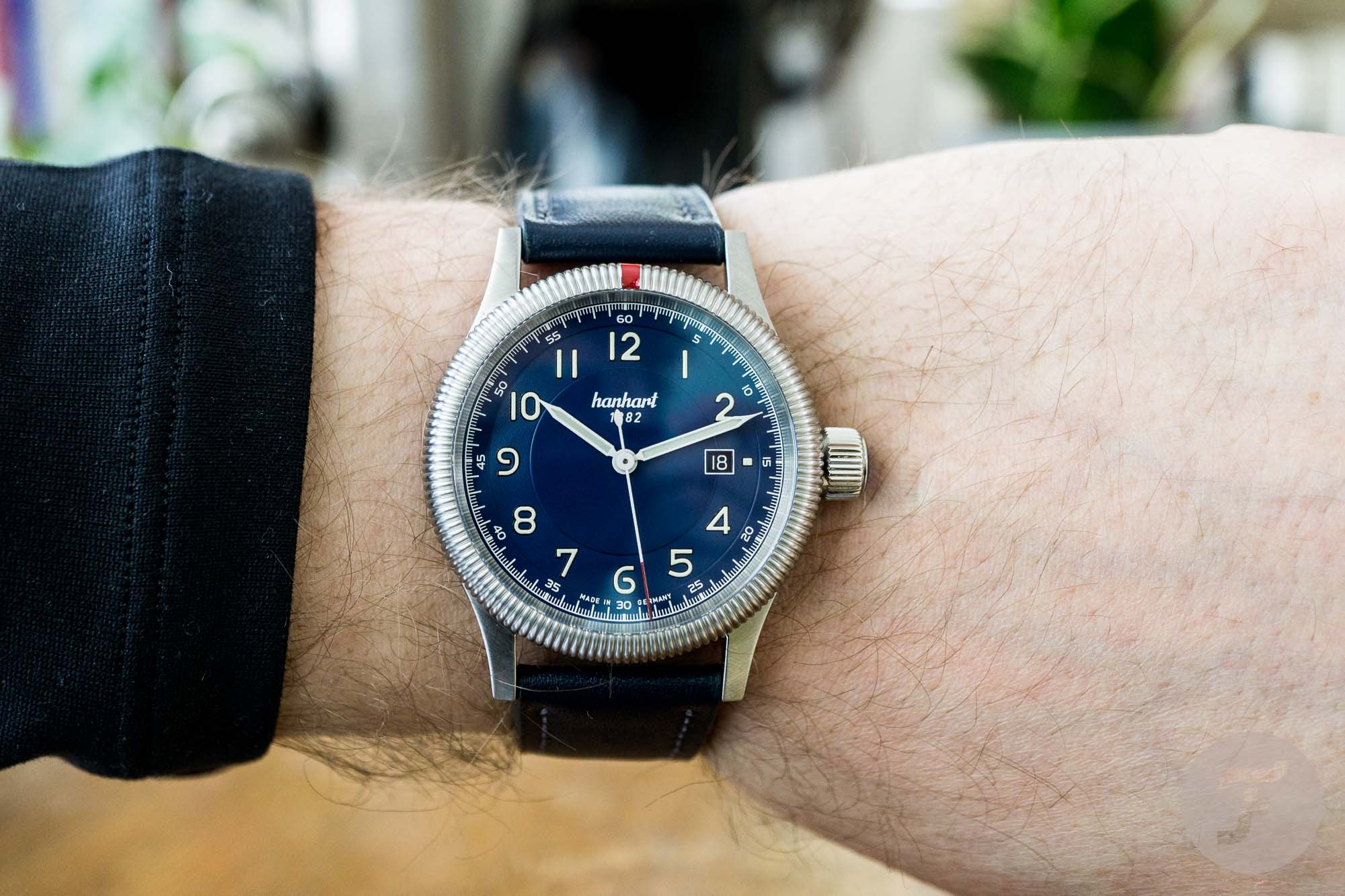 The Pioneer One comes on a 22mm deep blue calf leather strap even though a steel bracelet is also available. It was a bit stiff at first like most leather, but I’m sure with time it would soften up. The leather strap has a brushed Hanhart steel buckle. As the brand’s position is on the affordable range the price of the Pioneer One is also relatively low. It starts at only €890 for the leather version, which is a competitive price in this segment. Due to the large selection of Pioneer One color choosing one that fits your liking isn’t hard to do.

Hot Topics
Introducing: The Omega Speedmaster Super Racing With Spirate System
165 comments
Design Vs. Specs — Which Is More Important To You When Buying A Watch?
86 comments
My Predictions For New Omega Speedmasters In 2023
54 comments
The Time To Buy Is Now: How The Current Economic Climate Influences Watch Buying And How You Should React
51 comments
A Regret-Free Guide To Buying Your First Luxury Watch — Part Three: Higher-End Options From Omega, Rolex, Grand Seiko, And More
48 comments
Popular
Top 10 Rolex Watches – Overview of Models Favoured By Our Readers
Fratello
25
Hands-On With the Seiko Prospex SRPC91K1 – Save The Ocean
Robert-Jan Broer
15
You Asked Us: Nomos Orion as a dress watch?
Gerard Nijenbrinks
10