Angelus Celebrates The Chronodate’s 80th Anniversary With An Imposing Successor

Founded in La Chaux-de-Fonds in 1891, Angelus built a reputation during the 20th century as one of the most influential horological manufactures. The brand’s excellent in-house movements and vintage timepieces are coveted by collectors worldwide. My colleague Balazs is a big fan of the brand and owns a couple of vintage Angelus watches. Unfortunately, the brand was one of many that succumbed to the Quartz Crisis. After remaining dormant for over 30 years, Angelus was revived in 2015 by Swiss movement manufacturer La Joux-Perret. Since then, it has become the new sounding point for La Joux-Perret to display some of its most impressive mechanical marvels. And now, Angelus introduces a homage to its most respected watch, the Chronodate chronograph from 1942.

Indeed, you might have read this intro before. It was written by my other colleague Dave who wrote an article on the introduction of the Angelus U-30 last year. But as we’ll be talking about one of the brand’s most well-known vintage models today, I thought it would be good to give you a little bit of an intro on Angelus. After all, it’s not that often that we write about this brand. And there might be quite a few of you, like myself, who are not so familiar with both Angelus’s origins and current offerings.

The world’s first chronograph with a triple calendar in 1942

If you’re not familiar with what Angelus has done since 1891, please hit that search field in the top-right corner of your screen. Balazs has written great articles on the brand’s history, such as this one on the brand’s most important models of the past. He even worked together with Dr. Christoph Öhm-Kühnle on an Angelus Collector’s Guide. But the watch in the spotlight today is the Angelus Chronodate. In 1942, the Chronodate was the world’s first chronograph with a triple calendar showing the day, date, and month. The following year, the model name changed to “Chronodato”, but now the new Angelus reintroduces a Chronodate into its contemporary lineup. And as you can see, the new Chronodate has very little in common with that original model from the 1940s.

But that was something to be expected. As Balazs already pointed out, the company behind Angelus didn’t revive the brand to produce heritage pieces. The people at Angelus are certainly vintage enthusiasts, like the brand’s head of innovation, Dr Sébastian Chaulmontet. But they’d like to pay homage to the brand’s past in their very own way by blending vintage high watchmaking with contemporary design and materials. So take a good look at that Chronodato model above, and let’s see how the brand tried to represent the old values in the all-new Chronodate. 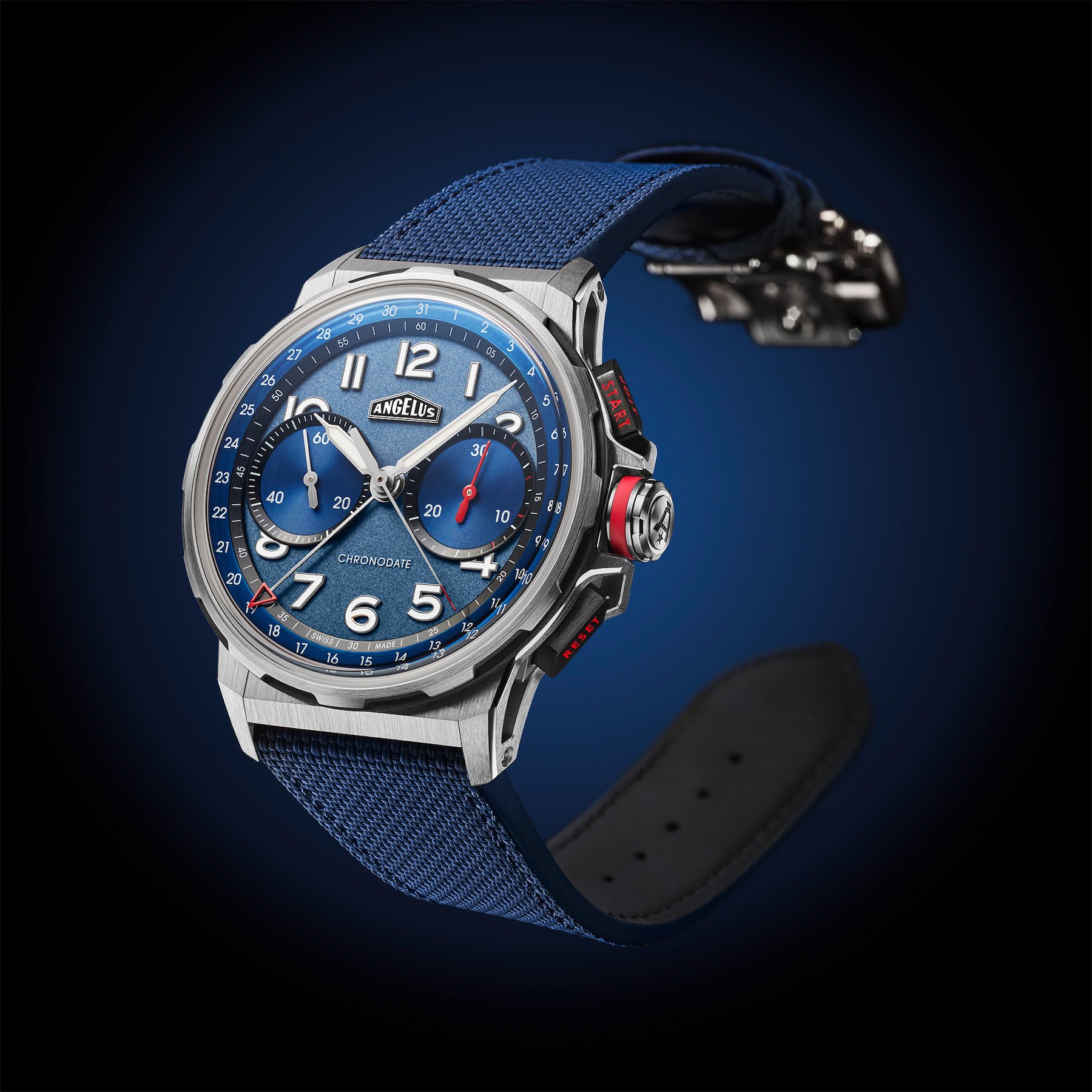 I’ll start with the similarities because we can be quite quick here. Basically, everything but the dial layout has received a major sports-watch overhaul. Both sub-dials — one for the chronograph’s elapsed minutes and one for the running seconds — are still there. The Arabic numerals, including those cut off by the sub-dials, still continue to mark the hours as well. And of course, the characteristic pointer date ring on the dial’s periphery has stayed. The syringe hour and minute hands have also survived the overhaul, but what didn’t are the distinctive day and month windows. 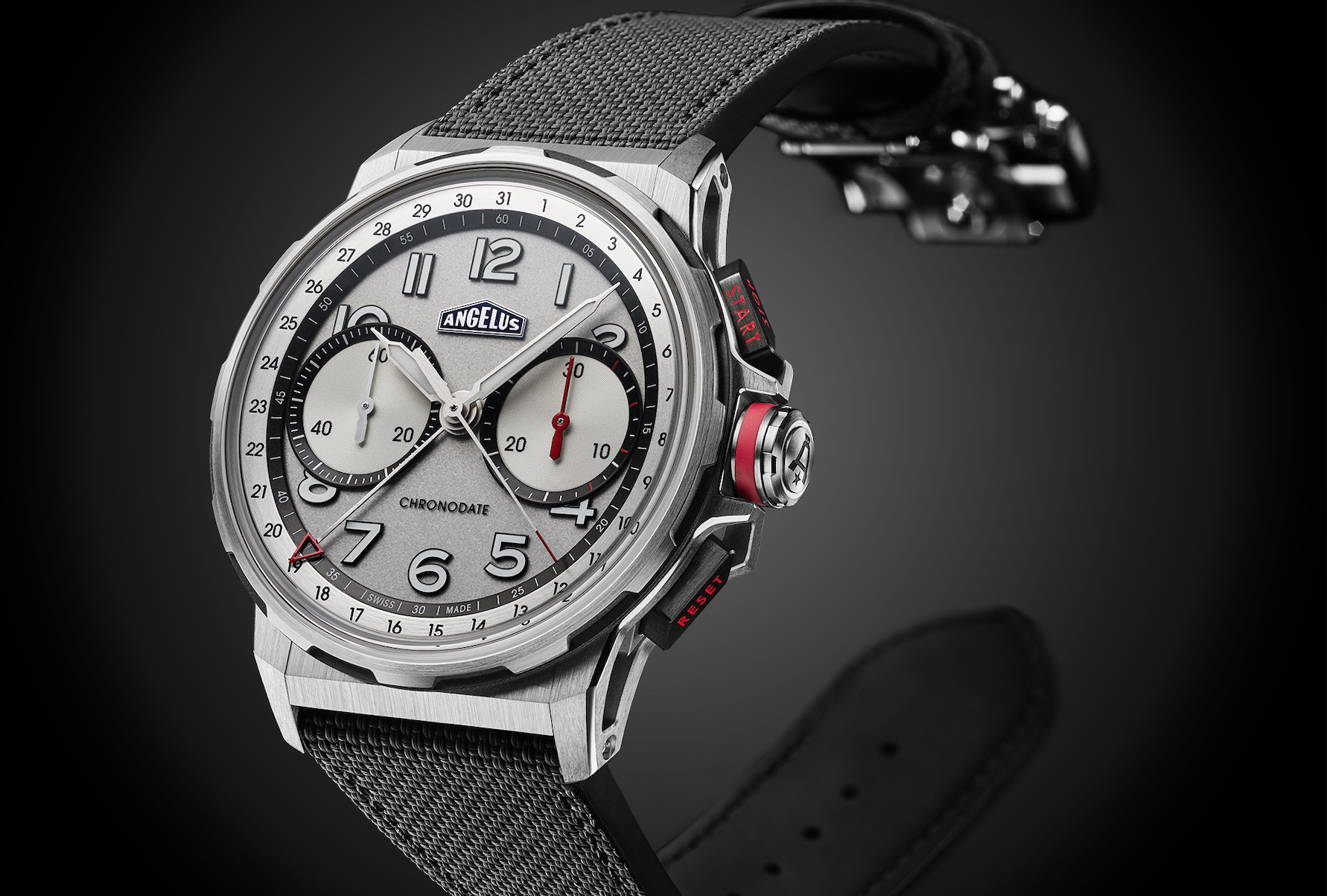 In fact, Angelus left out the triple-calendar feature on the all-new Chronodate. To be honest, this surprised me a bit when I first saw the pictures. Why would the brand leave out the one signature feature that made the Chronodate/Chronodato so famous? It must have something to do with the sporty makeover that Angelus had in mind. Technology-wise, the brand is more than capable of building impressive and complex movements. Well, never mind. Let’s move on to the rest of the Chronodate’s features because there’s still enough to get excited about. 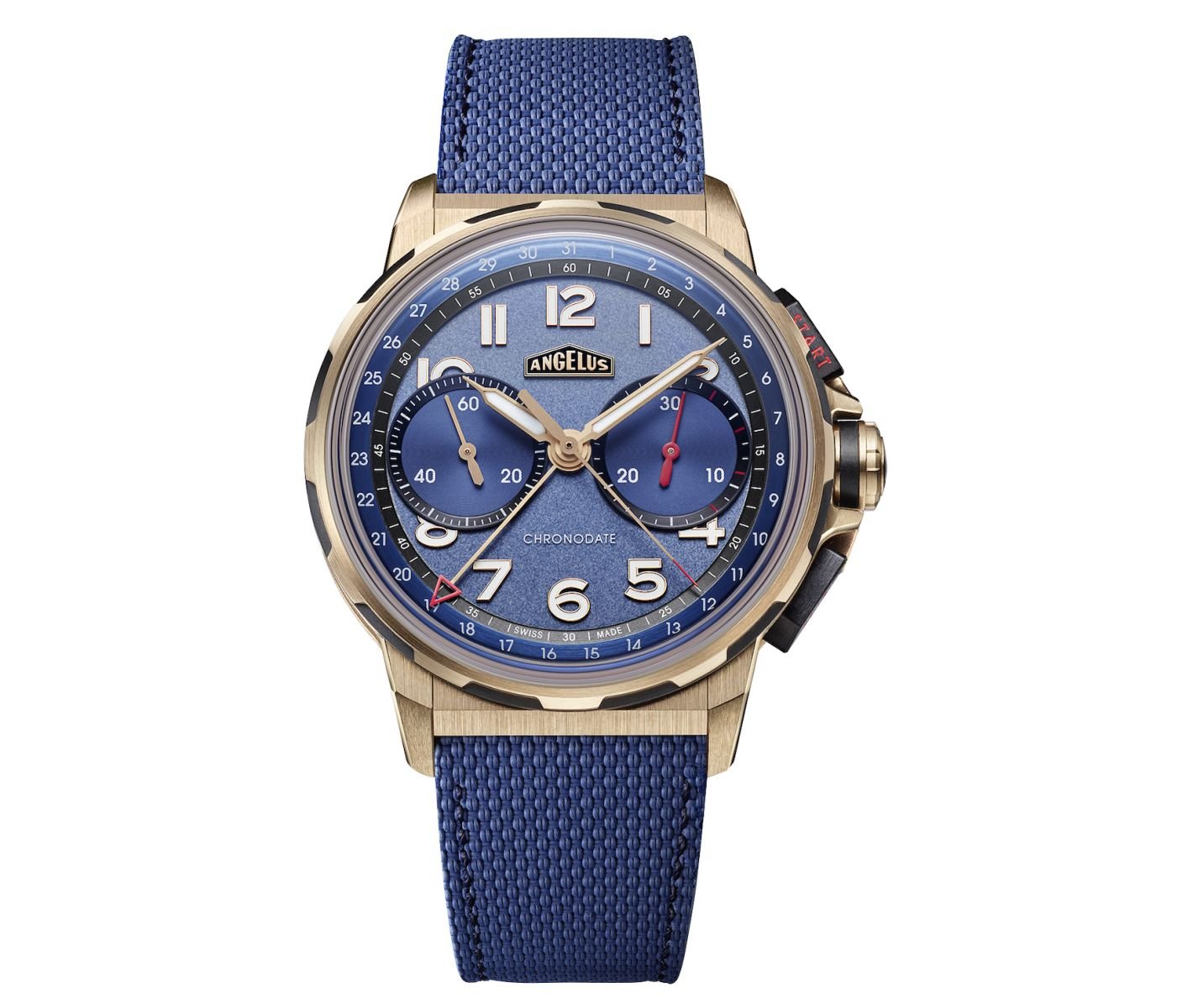 A large and legible three-dimensional dial

The new Chronodate treats us to frosted PVD dials in blue and opaline (the latter only available on the titanium version) on which the majestic Angelus logo and model name seem to float. That sense of depth is further reinforced by the large applied Arabic numerals and the elevated tracks of both the sub-dials and the main dial. That imposing 3D effect is exactly how Angelus tries to pay homage to the large and legible dials of this model’s vintage predecessors. Let’s move on to another imposing part of the 2022 Chronodate — the watch case itself.

The new Chronodate is available with a mostly brushed case, measuring 42.5mm in titanium or rose gold. It’s a very muscular design with cutouts that start at the tip of the lugs and expand all the way to the center of the case. On the right side, they actually turn into wings that function as guards for the chronograph pushers and the crown. Angelus has also added a rubber ring in a contrasting color to the crown. It provides a better grip and accentuates the sporty character of the new Chronodate. The bezel with its aggressive cutouts is the same as the one used on the Angelus U-41. Underneath its metal surface lies a matte black ring made out of a carbon composite. 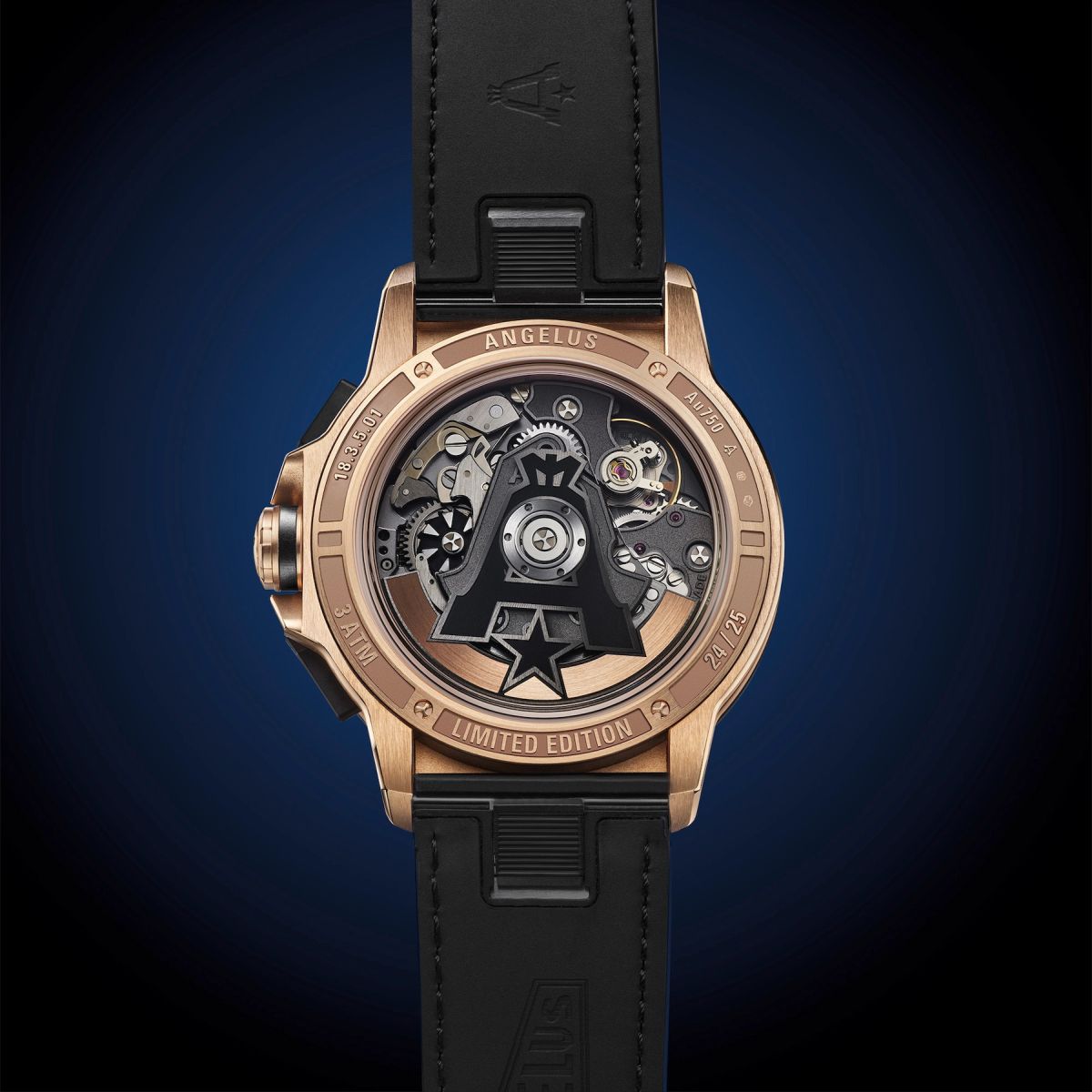 Angelus used that same material for the chronograph pushers and the holder in which the all-new A-500 automatic chronograph movement sits. This column-wheel chronograph caliber operates at 4Hz (28,800vph) and uses a horizontal clutch to keep its thickness to a minimum. The A-500’s rotor has the shape of the company’s historic logo. It reminds me very much of a logo an ice-hockey team might use. Again, this reinforces the new Chronodate’s very sporty character, as does the included sailcloth strap with its rubber lining. Angelus will produce just 25 pieces of each of the three versions of the Chronodate. 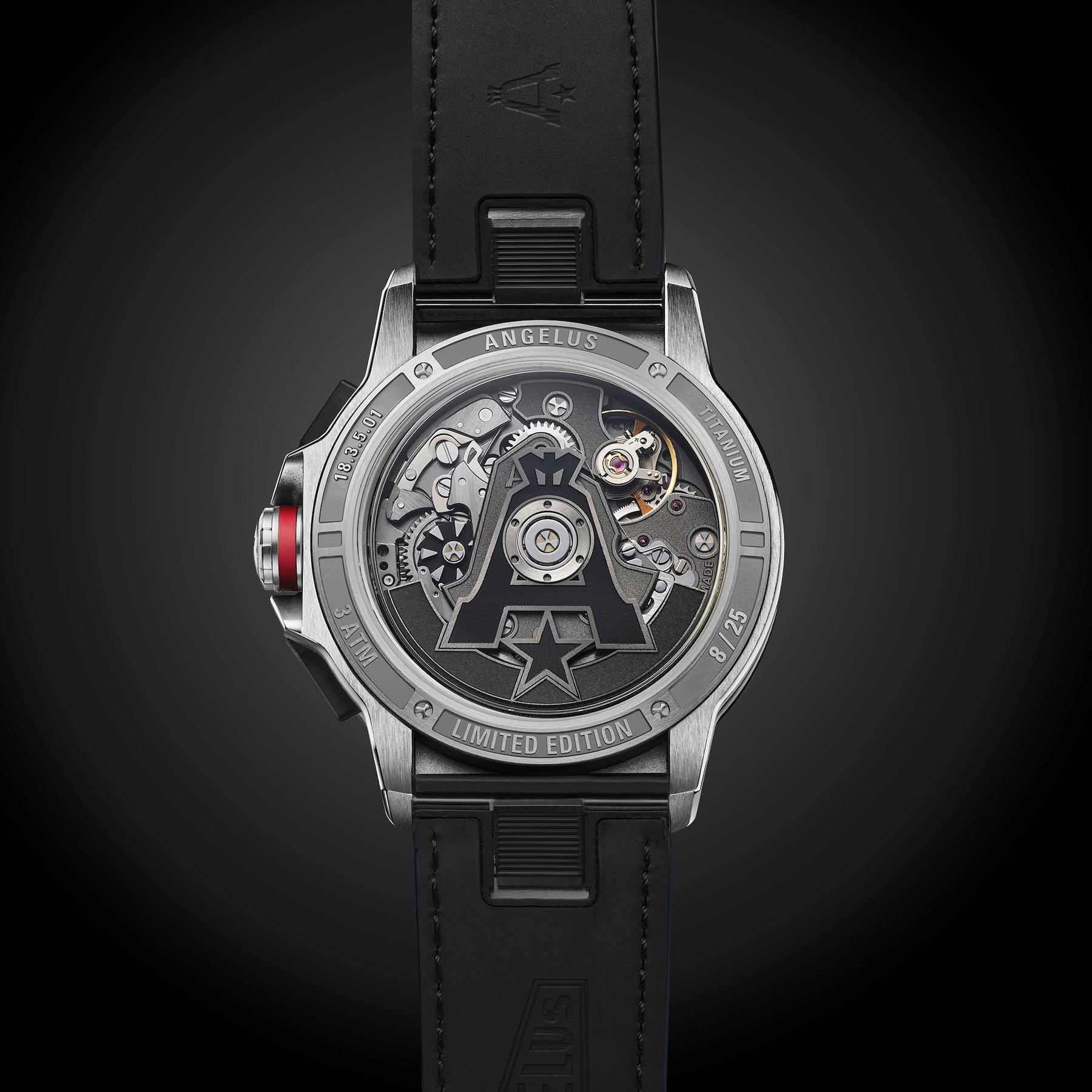 It certainly takes a lot of courage to revive one of the brand’s most significant watches. Apart from the 2022 Chronodate’s dial layout, there’s little to remind you of its 80-year-old predecessor. The all-new Chronodate is a very sporty piece with a lot of character. It very much continues in the line of modern reinterpretations that make up the current Angelus collection. As Balazs already mentioned, enthusiasts of the vintage Angelus will probably think the brand took it a bit too far. But I’m sure there will be fans of the new design out there as well. I just think the day and month complication should’ve been a part of it. 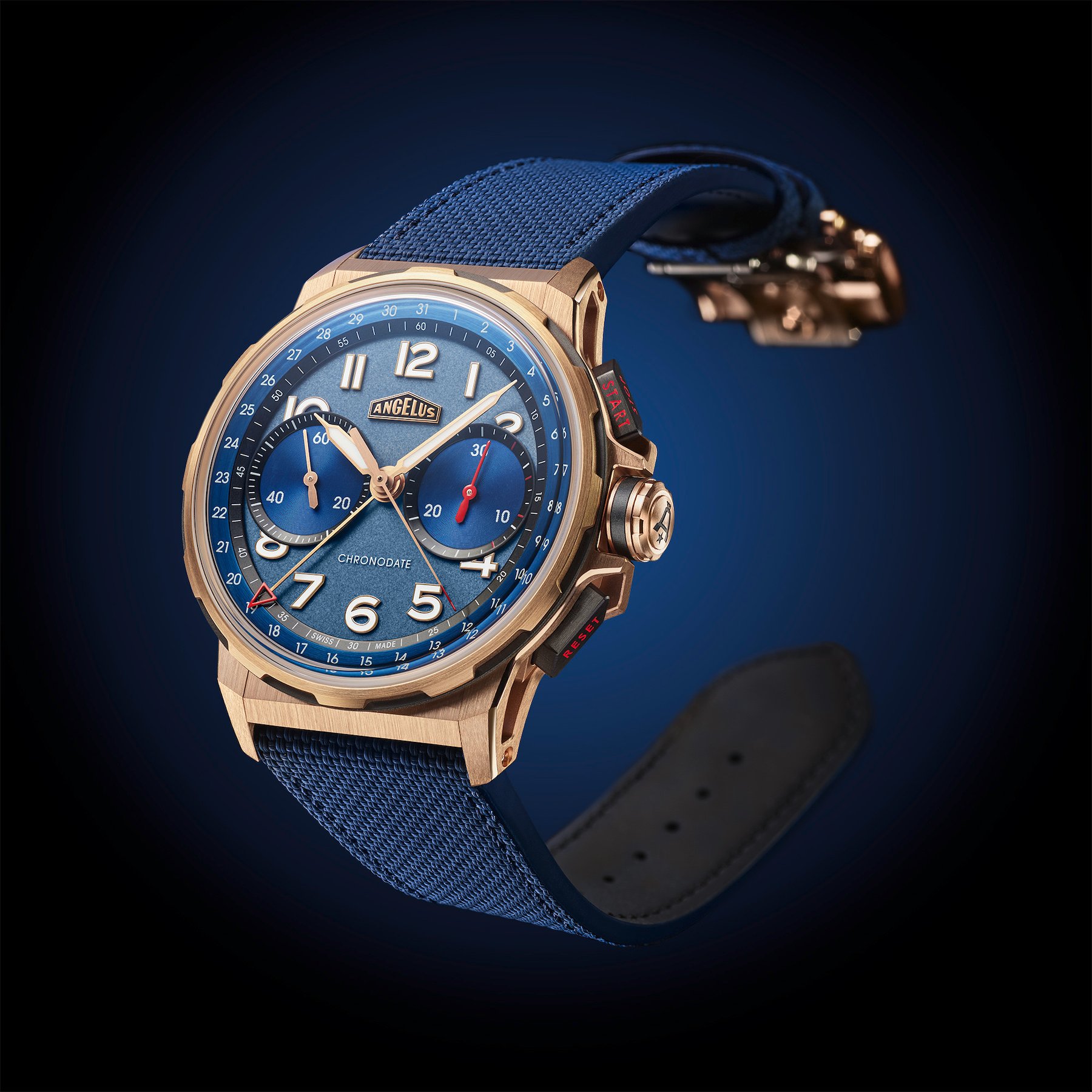 You can find more information on the Angelus website, and please feel free to me on Instagram @fliptheparrot

Hot Topics
Laventure Automobile Chronograph With A Proprietary Movement — Marking A Huge Leap Forward For One Of The Industry’s Most Promising Brands
155 comments
Fratello Exclusive: An Inside Look At The MoonSwatch Production Facilities
75 comments
We Talk To Swatch Group CEO Nick Hayek About The MoonSwatch
50 comments
Selling Your Watch To A Dealer Or Trading It In — Tips From A Former Watch Dealer
49 comments
Summer Splash — Round 2 : Jorg’s Tudor Pelagos FXD Vs. Lex’s Hublot Big Bang Integral Ceramic Sky Blue
47 comments
Popular
Top 10 Rolex Watches – Overview of Models Favoured By Our Readers
Fratello
22
The Ultimate Sports Rolex – The Explorer II Reference 1655
Robert-Jan Broer
15
You Asked Us: Rolex Submariner vs Omega Seamaster
Robert-Jan Broer
22