Cars & watches go very well together, we don’t have to explain this to you. A number of major car manufacturers seem to have a collaboration going on with watch brands. Formula 1, Le Mans, Daytona etc are being sponsored by watch brands for a long time as well. So why shouldn’t the famous Gumball 3000 rally be teaming up with a watch manufacturer? One of the coolest independent brands that masters the art of skeletonizing movements and dials, Armin Strom, teams up with Gumball 3000 in 2015. We couldn’t think of a better match ourselves.

The Gumball 3000 was founded by Maximillion Cooper and has lots of fans all around the world. Drivers in the most extreme sports cars will be traveling from Stockholm to Las Vegas in the 2015 version of the Gumball 3000 rally. Armin Strom will be one of the sponsors of the Gumball 3000 2015 rally but also will take part in the actual race itself.

We will see approximately 120 amazing sports cars (and other vehicles) participating to drive the 3000 mile route around multiple continents, in just 7 days.

On the 23rd of May, the Gumball 3000 race starts in Stockholm and will be in Amsterdam on the 26th of May. David Hasselhoff, Afrojack, Tony Hawk and many others will join the show in Amsterdam. Of course, team Fratello Watches will be there with Bert Buijsrogge, Gerard Nijenbrinks, Balazs Ferenczi and myself. During the last race, in 2013, we were also there (in Copenhagen) to do some watch spotting (extensive photo report can be found here).

Let’s start with the Manual Gumball 3000 model in PVD coated stainless steel. This 43.4mm case has been fitted with the Armin Strom calibre AMW11-GB hand-wound movement. It has 5-day power reserve, small seconds and off-centre time indications. To commemorate the Gumball 3000 rally, it has been engraved with the Gumball 3000 2015 tour logo at 9 o’clock and has specific Gumball 3000 engravings on the back side as you can see below. Price is 15,200 Euro. Comes with a leather strap as well as with a rubber strap. Each watch is individually numbered. 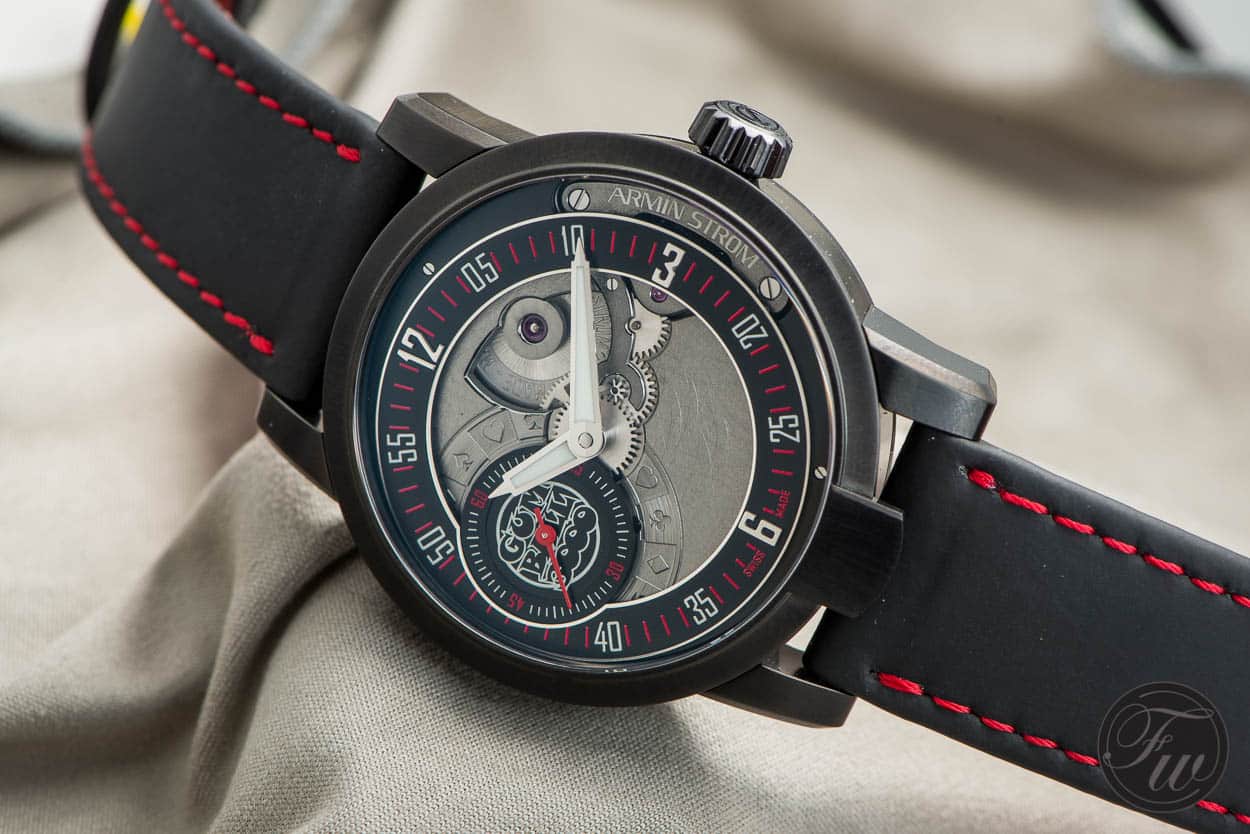 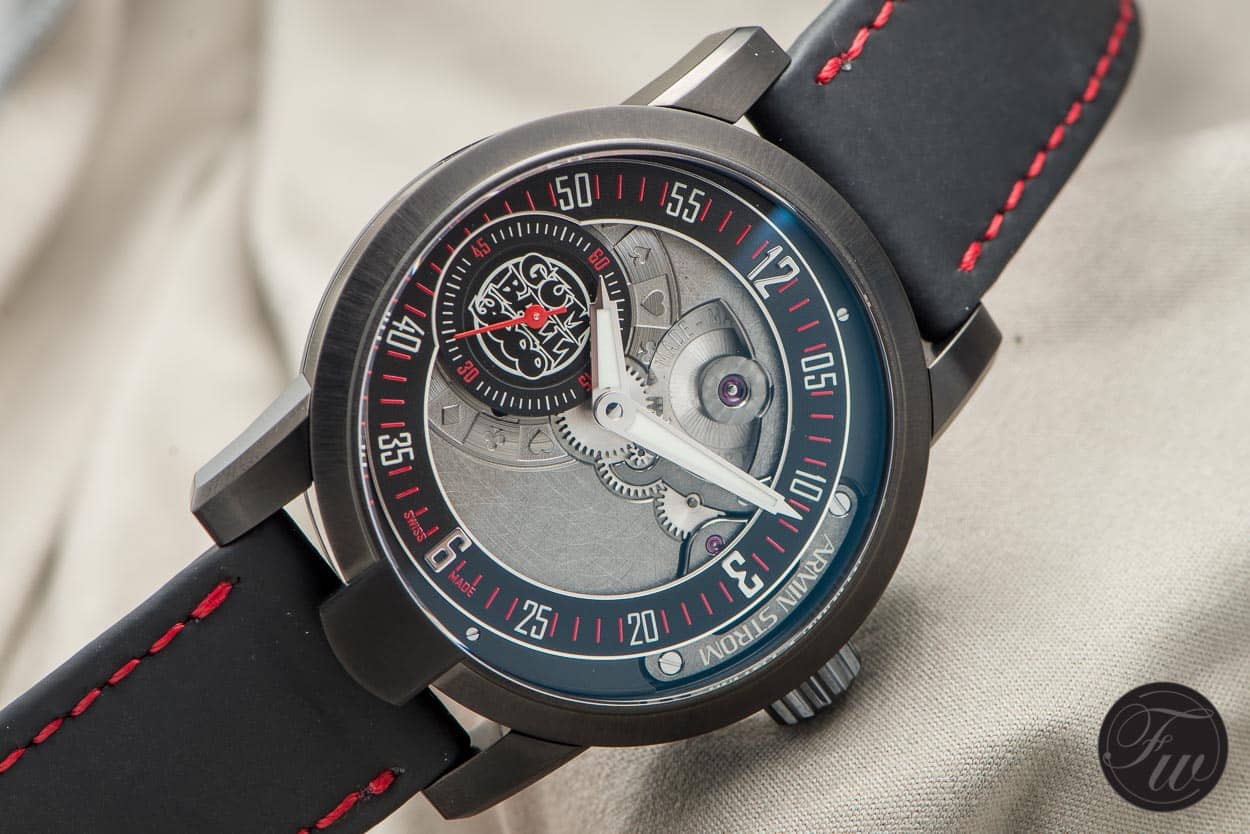 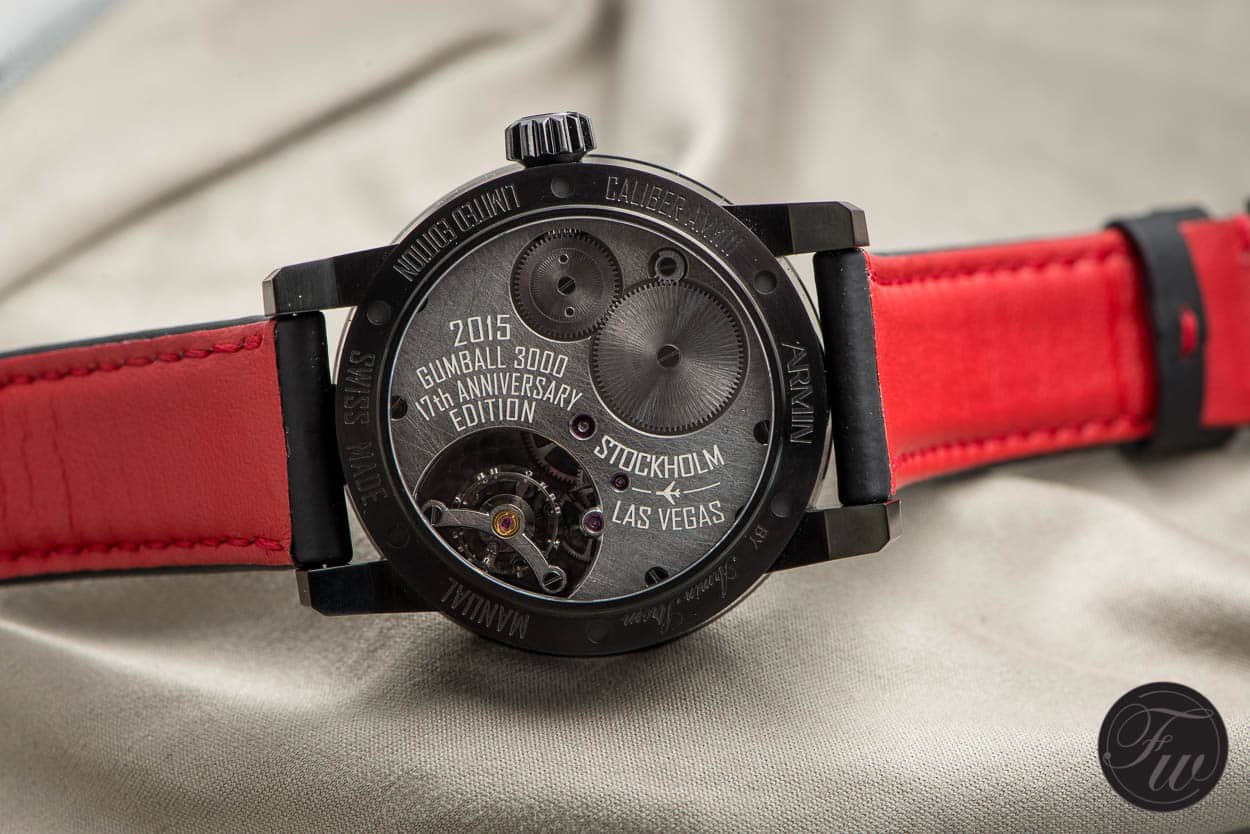 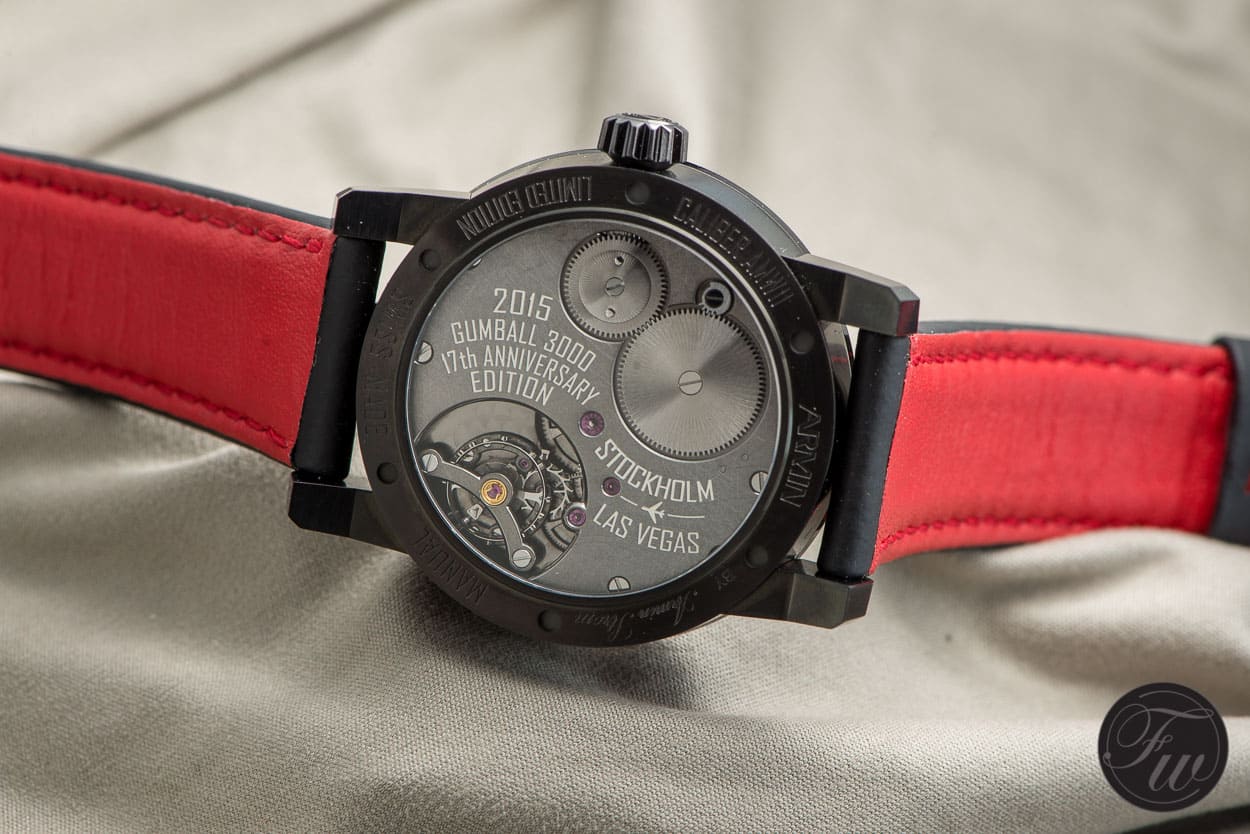 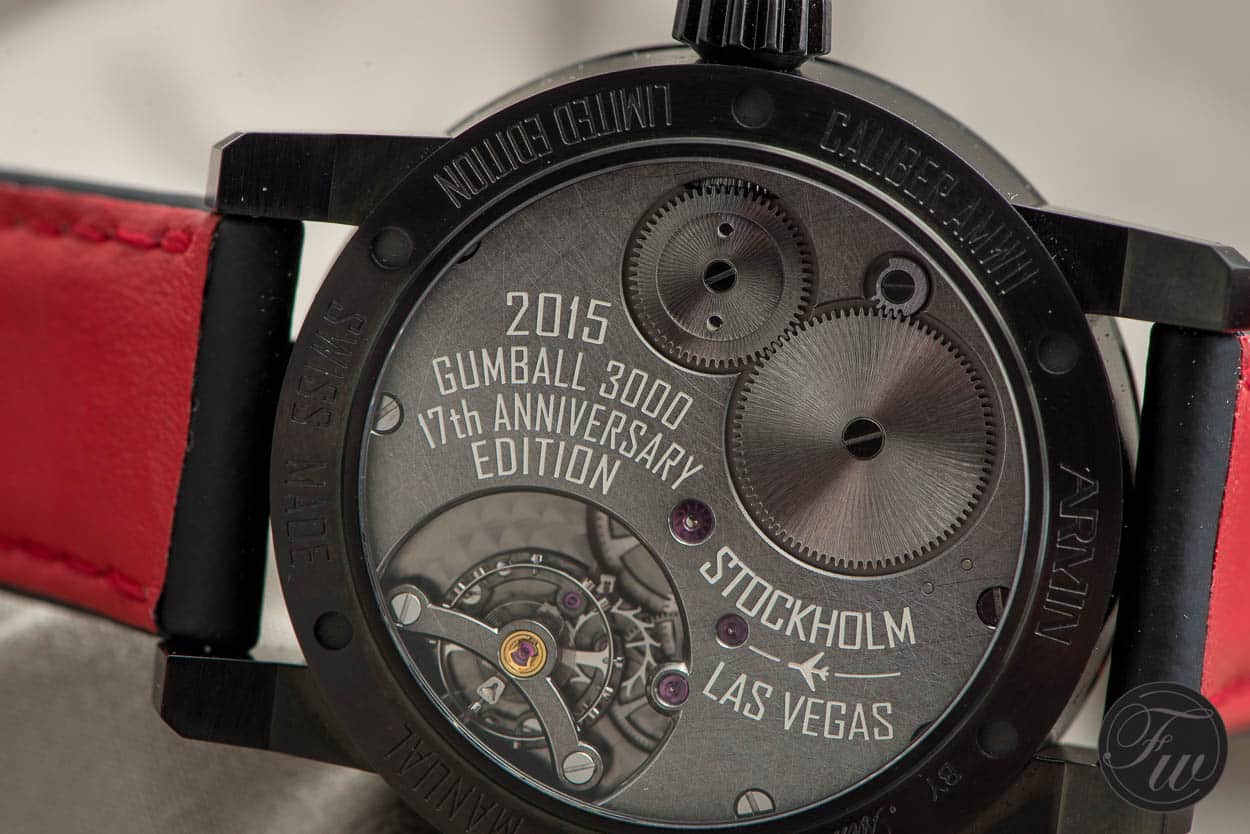 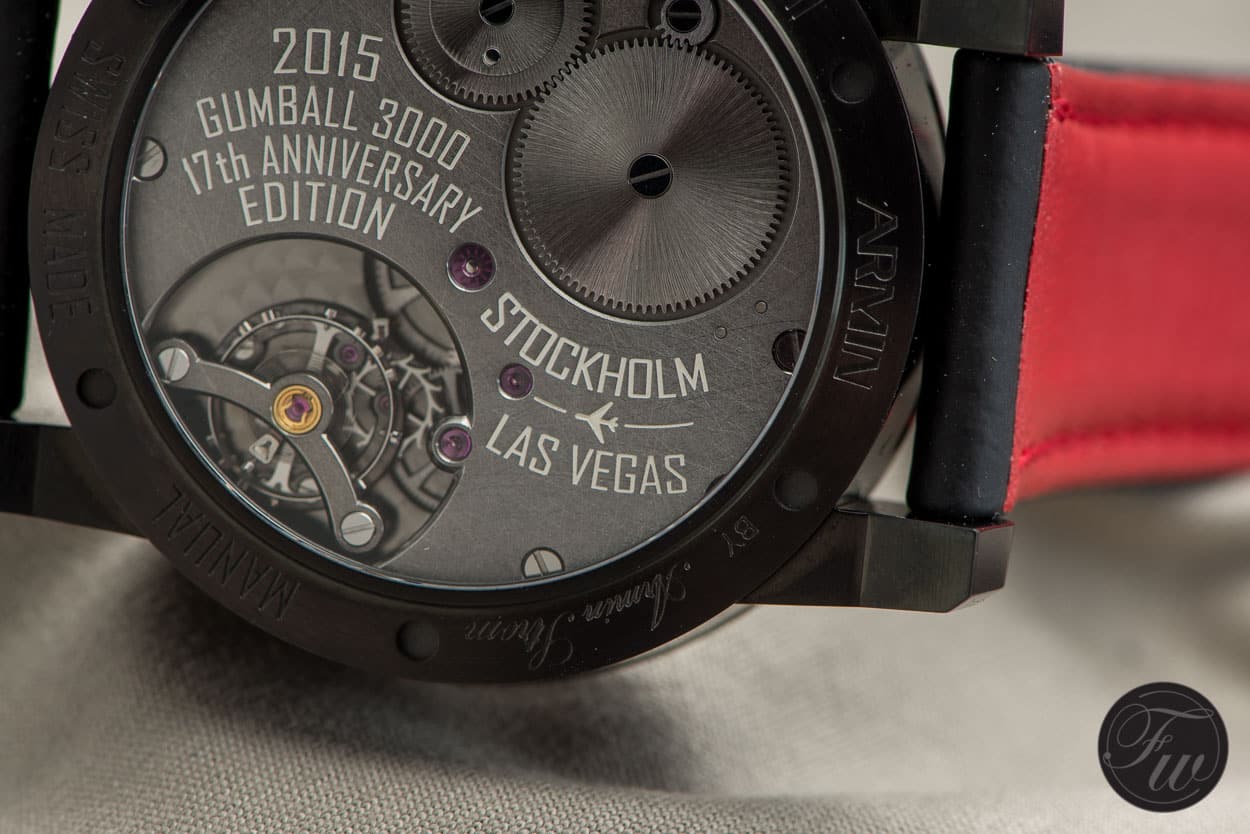 Next is the Armin Strom Double Barrel Gumball 3000 timepiece. This black PVD titanium case also measures 43.4mm and has the double barrel Armin Strom calibre ARM12-GB movement inside. This movement has a 10-days power reserve and – as can see below – as been engraved with the Gumball 3000 logo.

As you can see below, the visible bridges through the skeletonized dial have carbon inlays and golden trim lines. This Armin Strom Gumball 3000 model comes on the rubber strap as pictured below as well as with a leather strap. Price is 30.800,- Euro. Each watch is individually numbered. 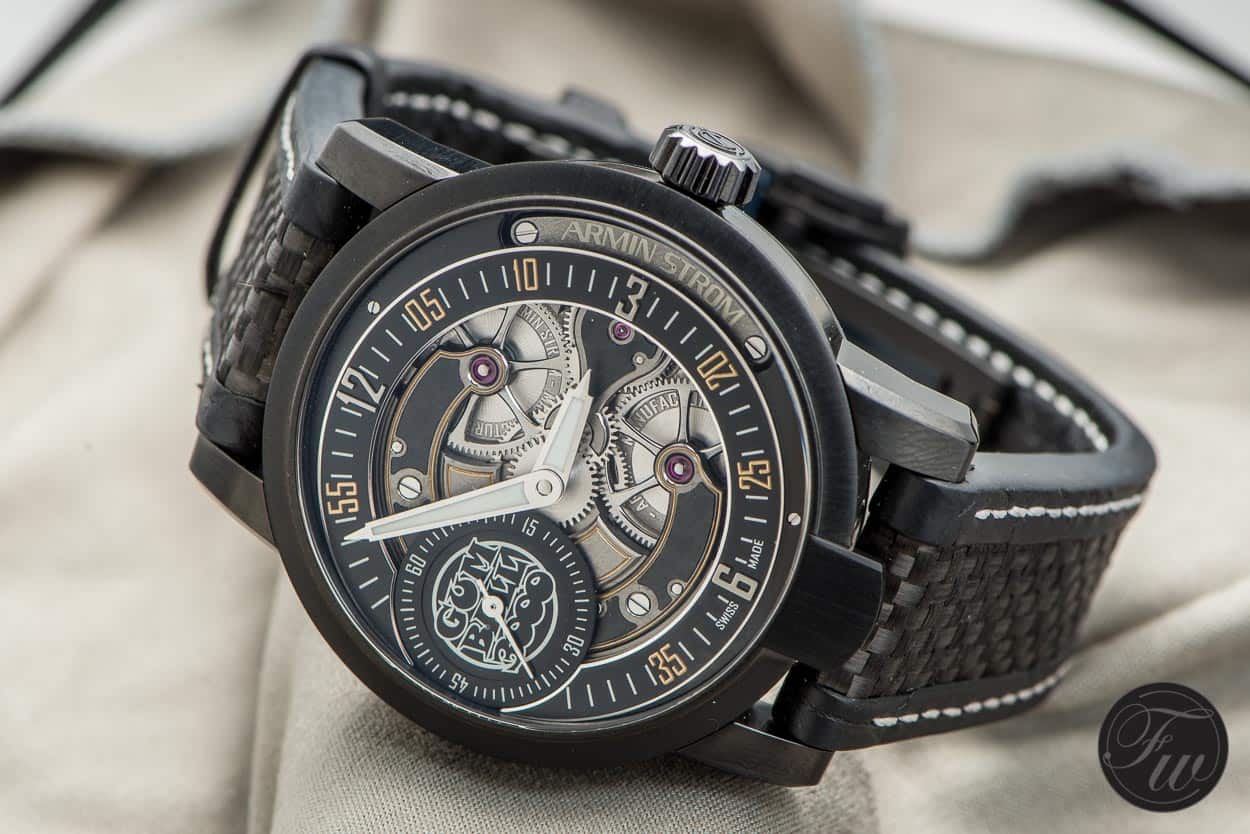 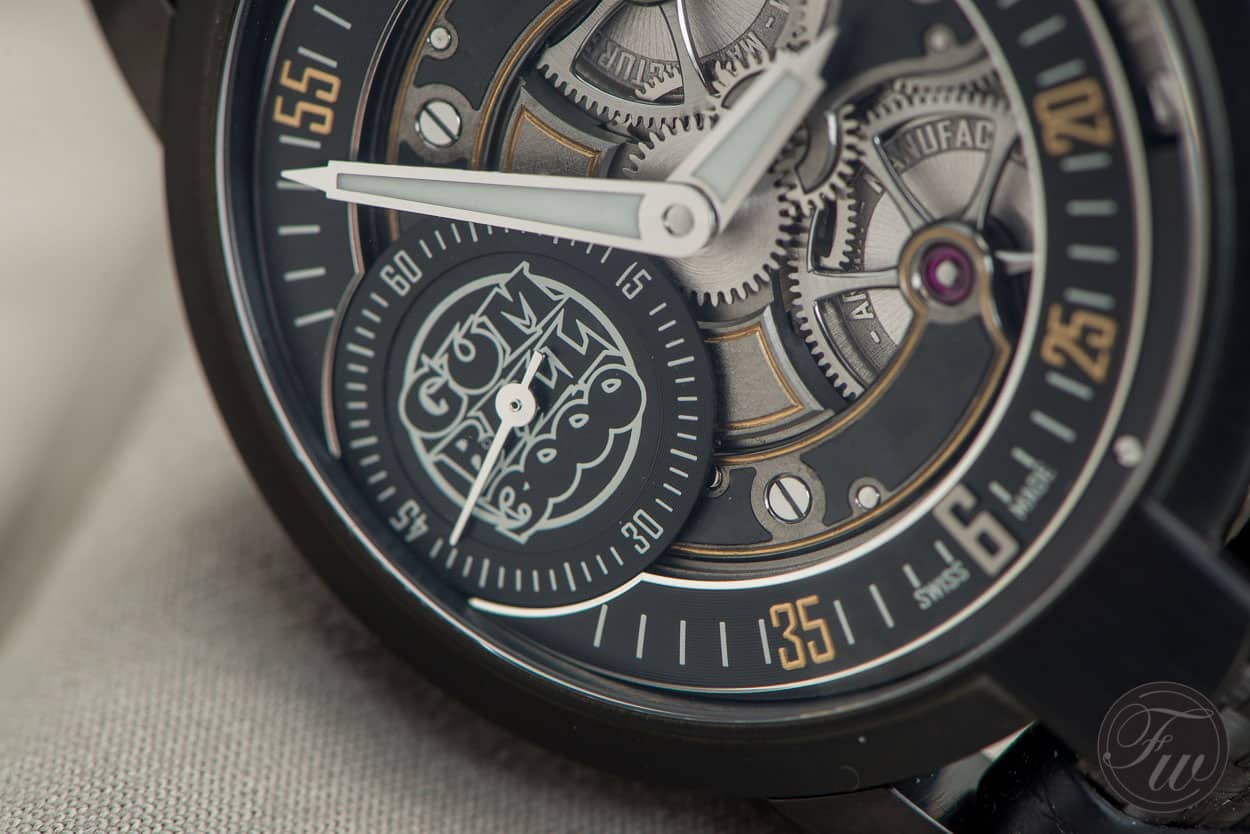 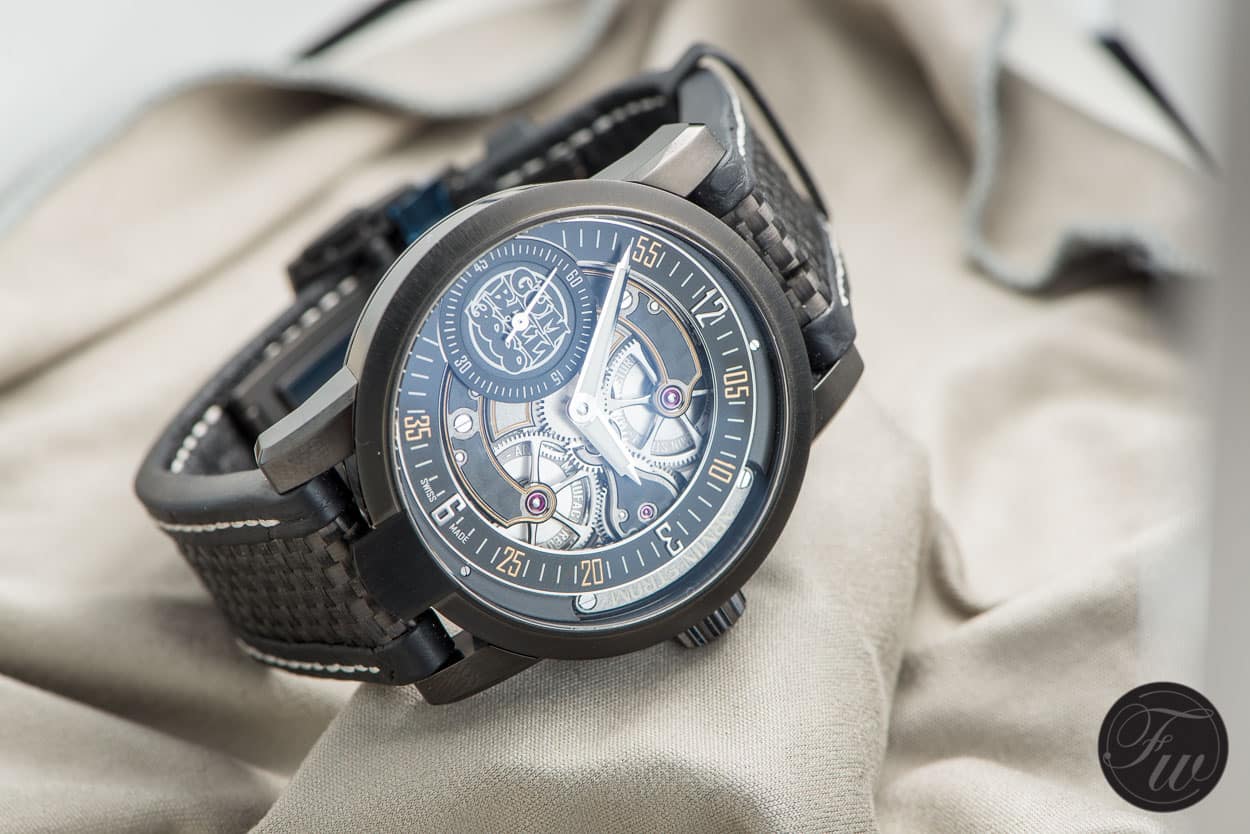 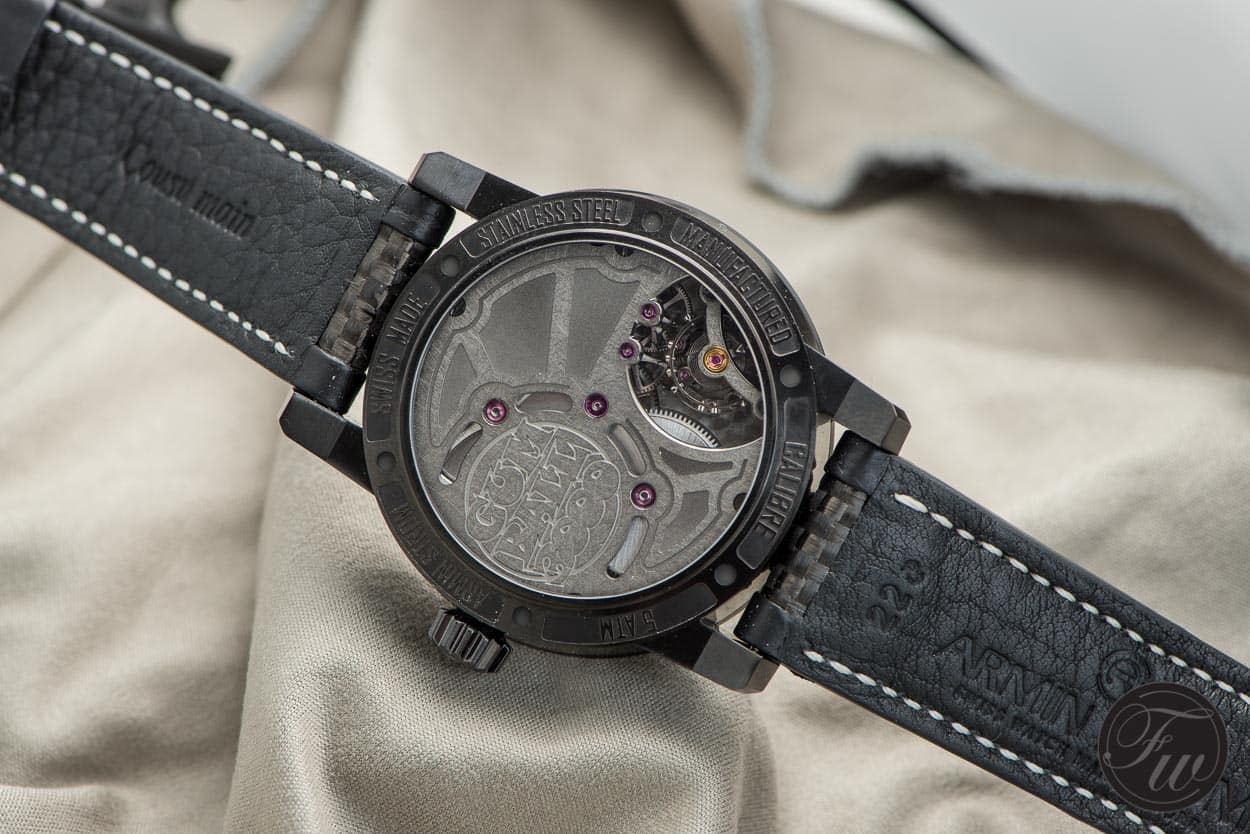 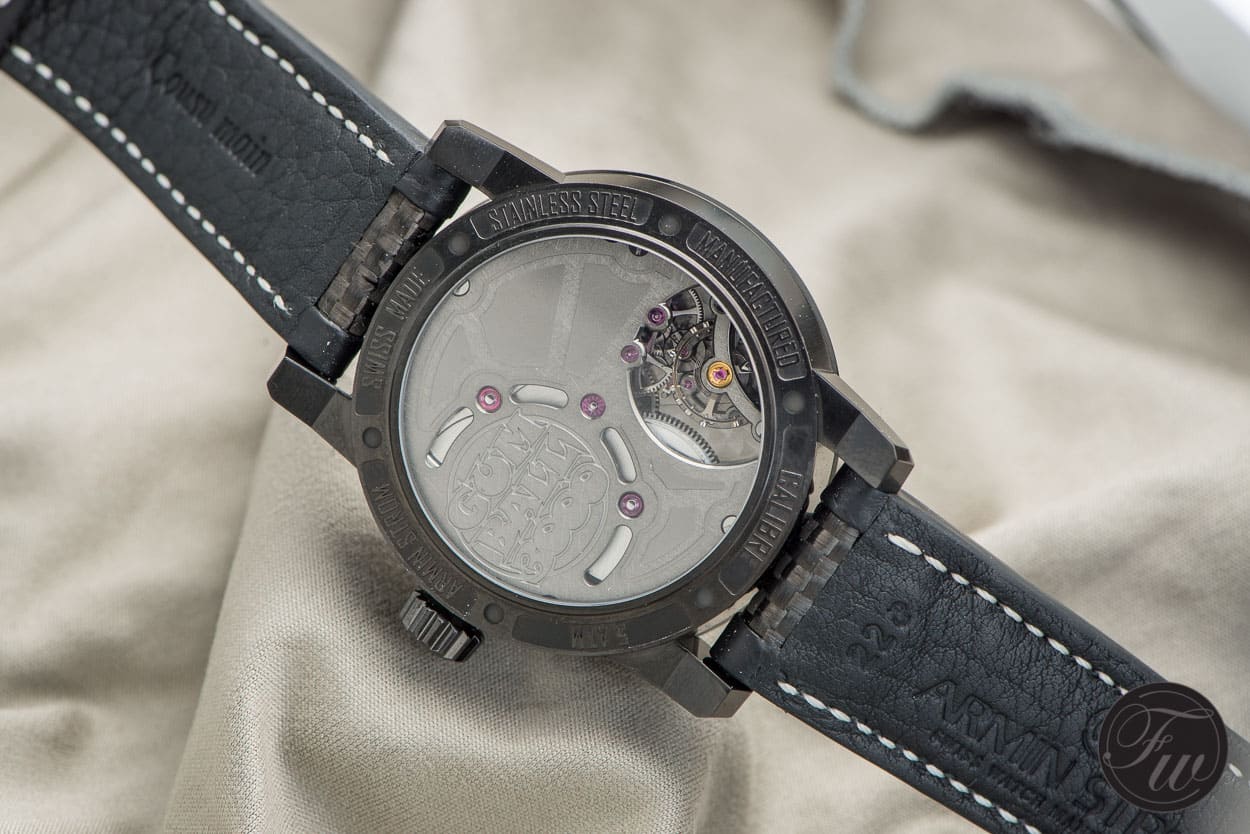 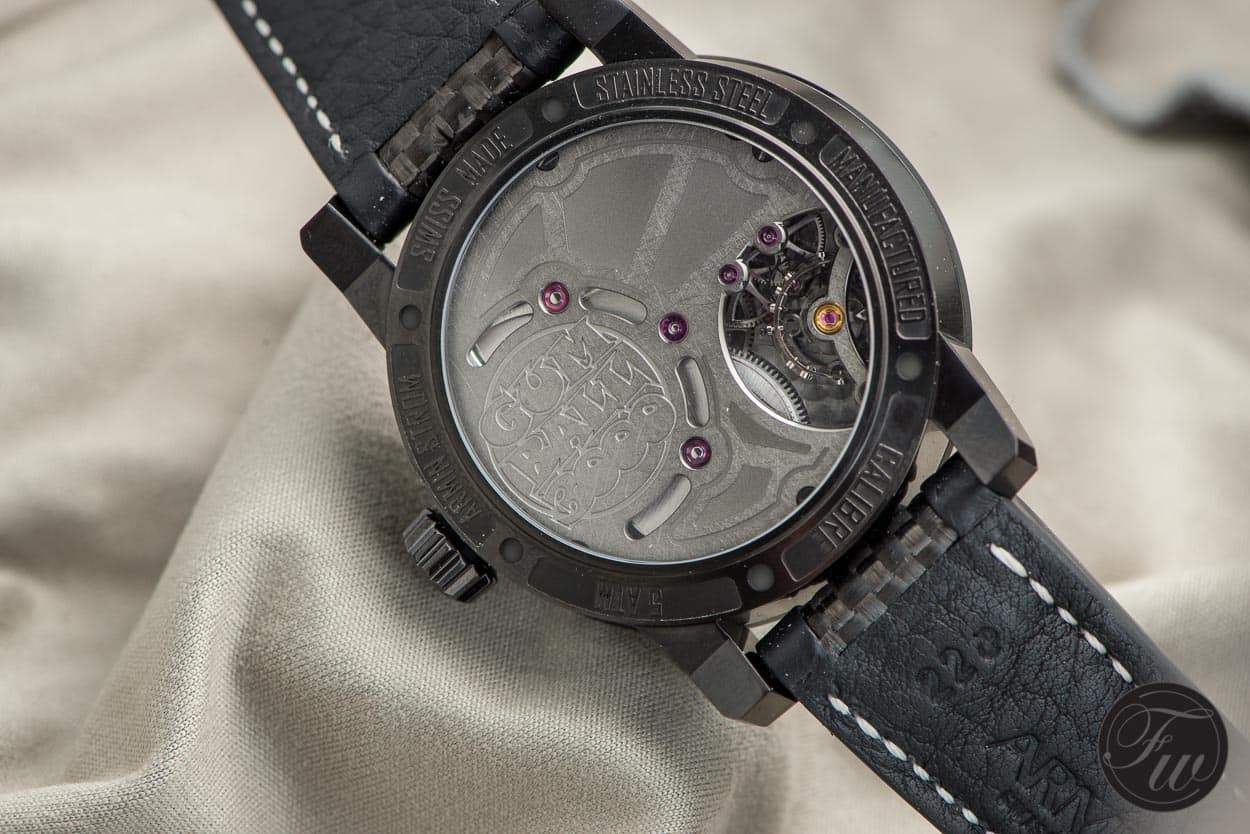 Last but certainly not least is the Armin Strom Tourbillon Gumball 3000 edition, in 18 carat rose gold. We already showed you this piece in our 5x Top 5 BaselWorld 2015 article a month ago. This beautiful piece has the Armin Strom calibre ATC11-GB movement inside. It features a tourbillon and has ‘Gumball 3000’ engraved in the small seconds-track. This manual-wind movement has a double barrel which ensures a 10-days power reserve, like the Double Barrel Gumball 3000 timepiece above. 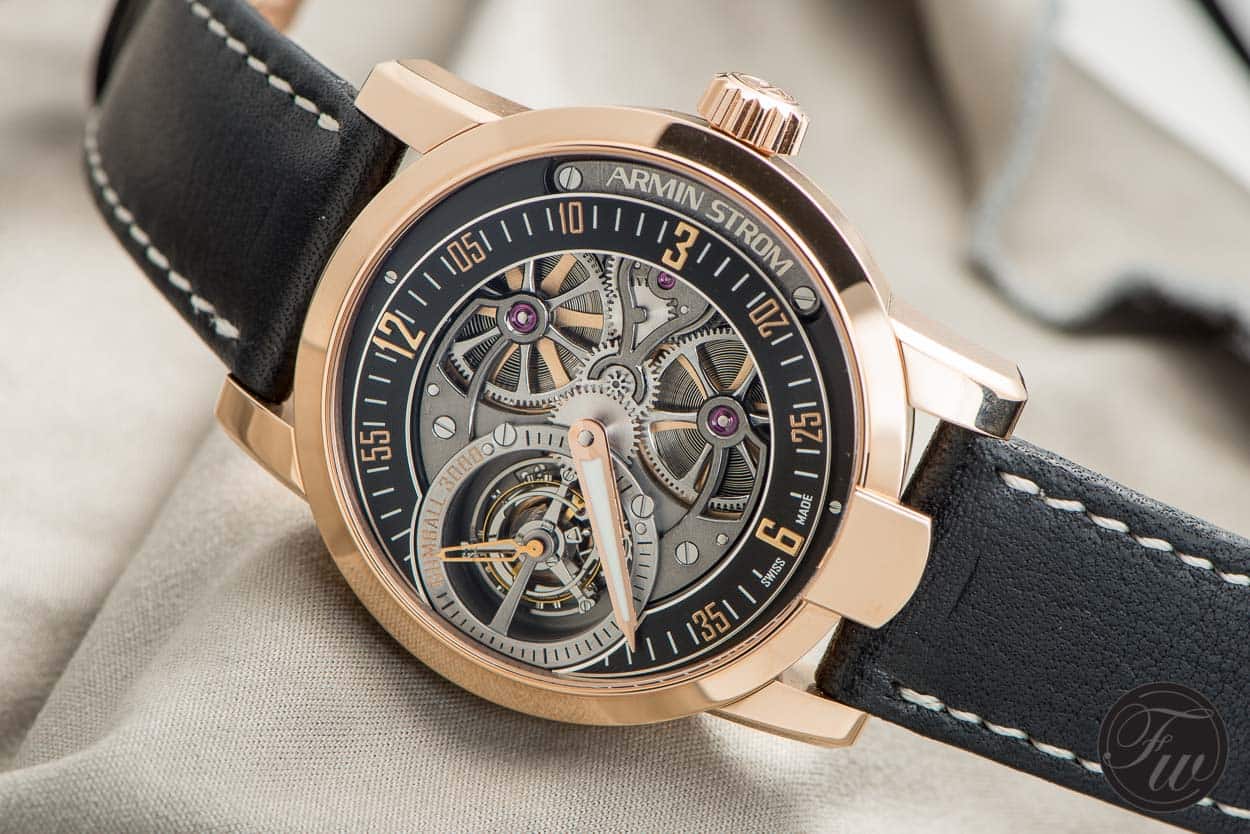 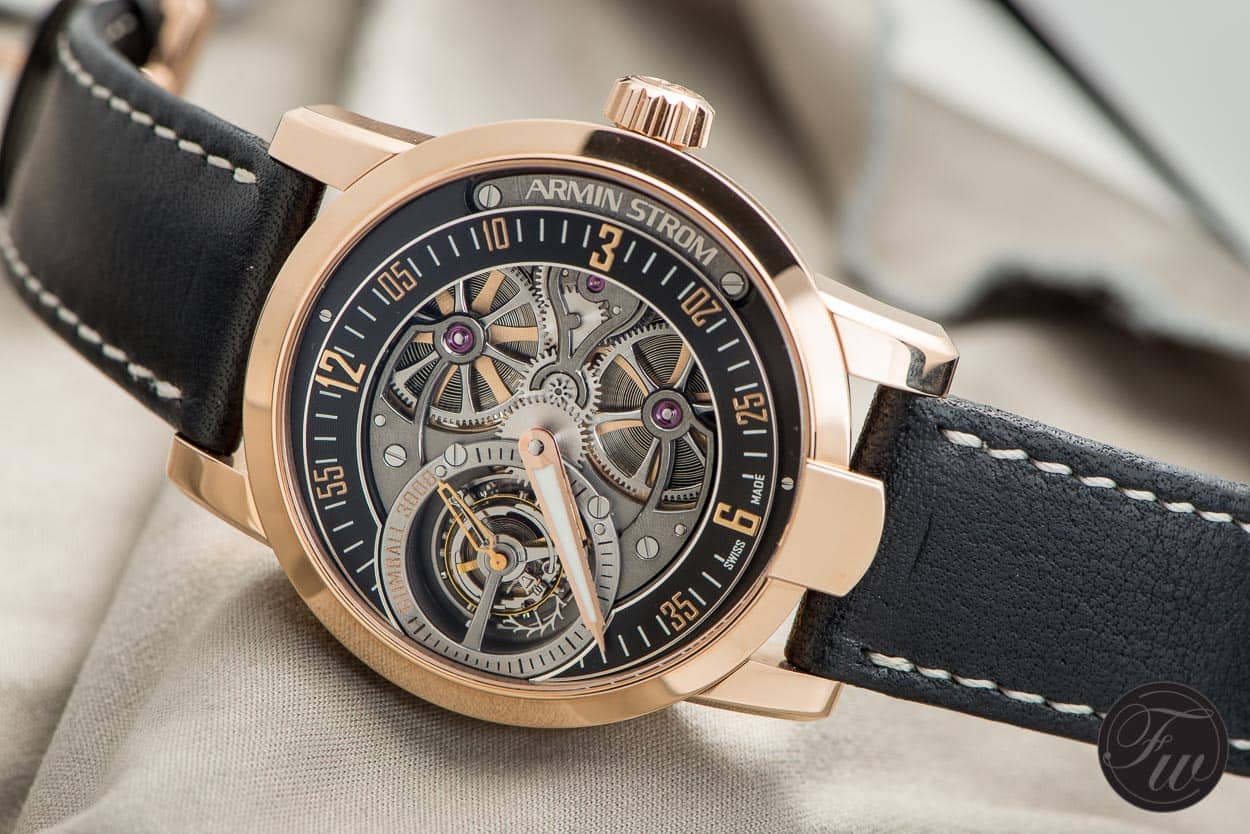 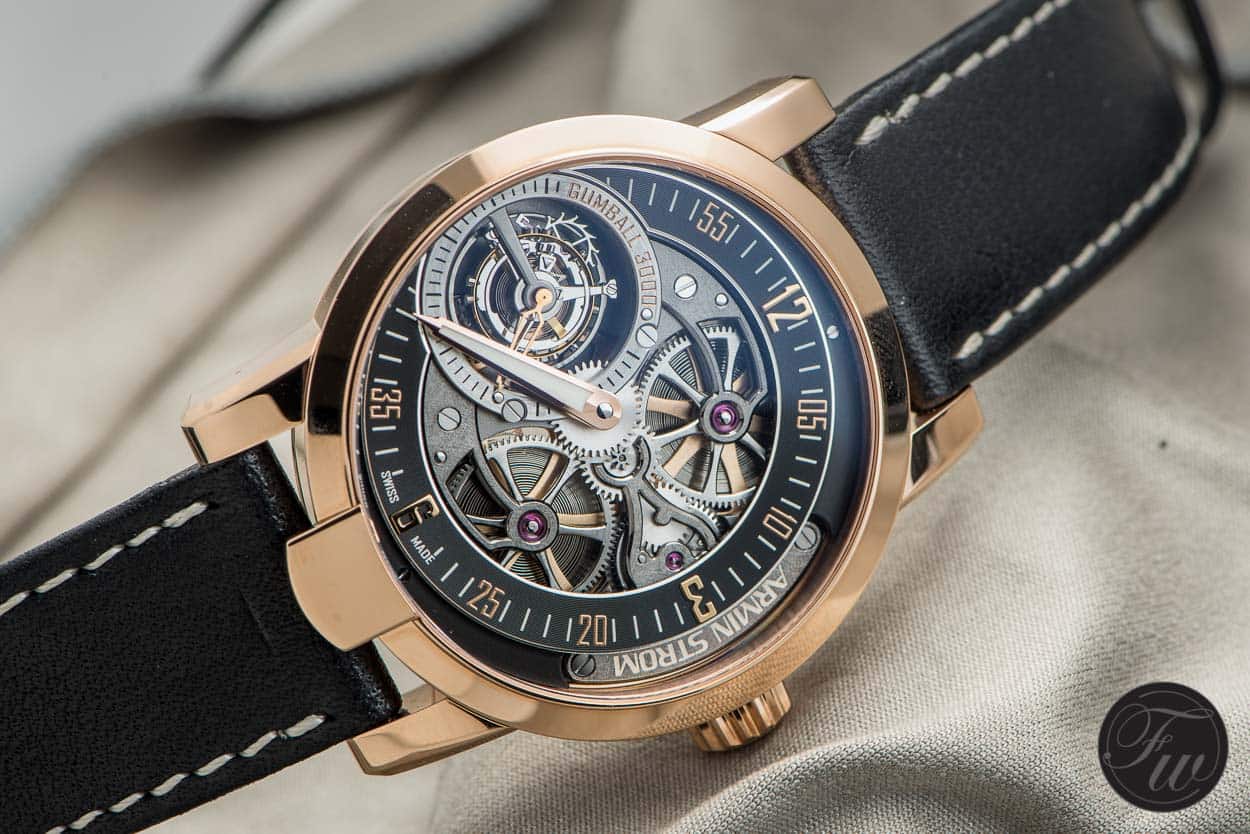 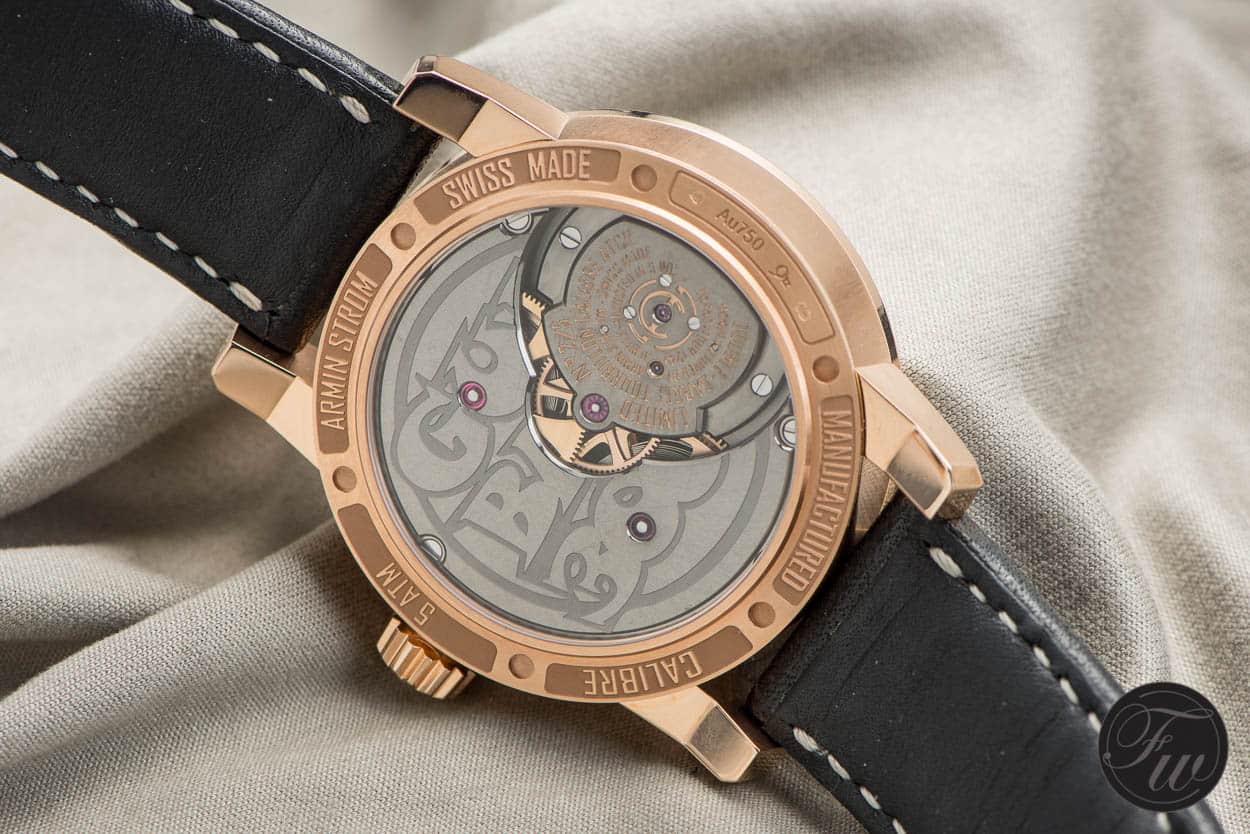 More information about these Armin Strom Gumball 3000 timepieces (and full specs) can be found here. Keep an eye on Fratello Watches and our weekly newsletter to get updated about the Gumball 3000 rally in Amsterdam next week.