I don’t know about you, but I feel like 2022 is turning into the year of collaborations. Months of internal turmoil and potential instability left many brands leaning on contemporaries for reassurance. Many manufacturers ended up showing surprising resilience and, in some cases, exponential growth. Yet, the blossoming partnerships ensured future joint projects. One such example is the recent Bremont S500 Bamford Special Edition. With the backbone of a shock-protected, hardened-steel, 500m-pressure-tested Bremont dive watch, Bamford Watch Department enters the fray with its distinct design flair. Does the clash of genres break the mold or miss the mark? Find out more in this hands-on experience.

It had been rare for watch brands to co-produce so overtly until now. For example, Jaeger-LeCoultre would supply its exemplary movements to fellow Grand Maisons of Haute Horlogerie with little fanfare. However, the practice of brands emphasizing co-production is seemingly at an all-time high. Last week, Thor gave you the run-down on British independents Fears and Garrick and their striking open-heart collaborative timepiece. Technically, this offering from Bremont and Bamford was launched first, but the Fears Garrick had been in the making since 2018. With Bremont operating at a volume exceeding the aforementioned British brands, the sky’s the limit with customization opportunities. Or should that be “the ocean’s depths”? Despite Bremont being renowned for aviation wristwatches, the Supermarine S500 sets its sights on the life aquatic. 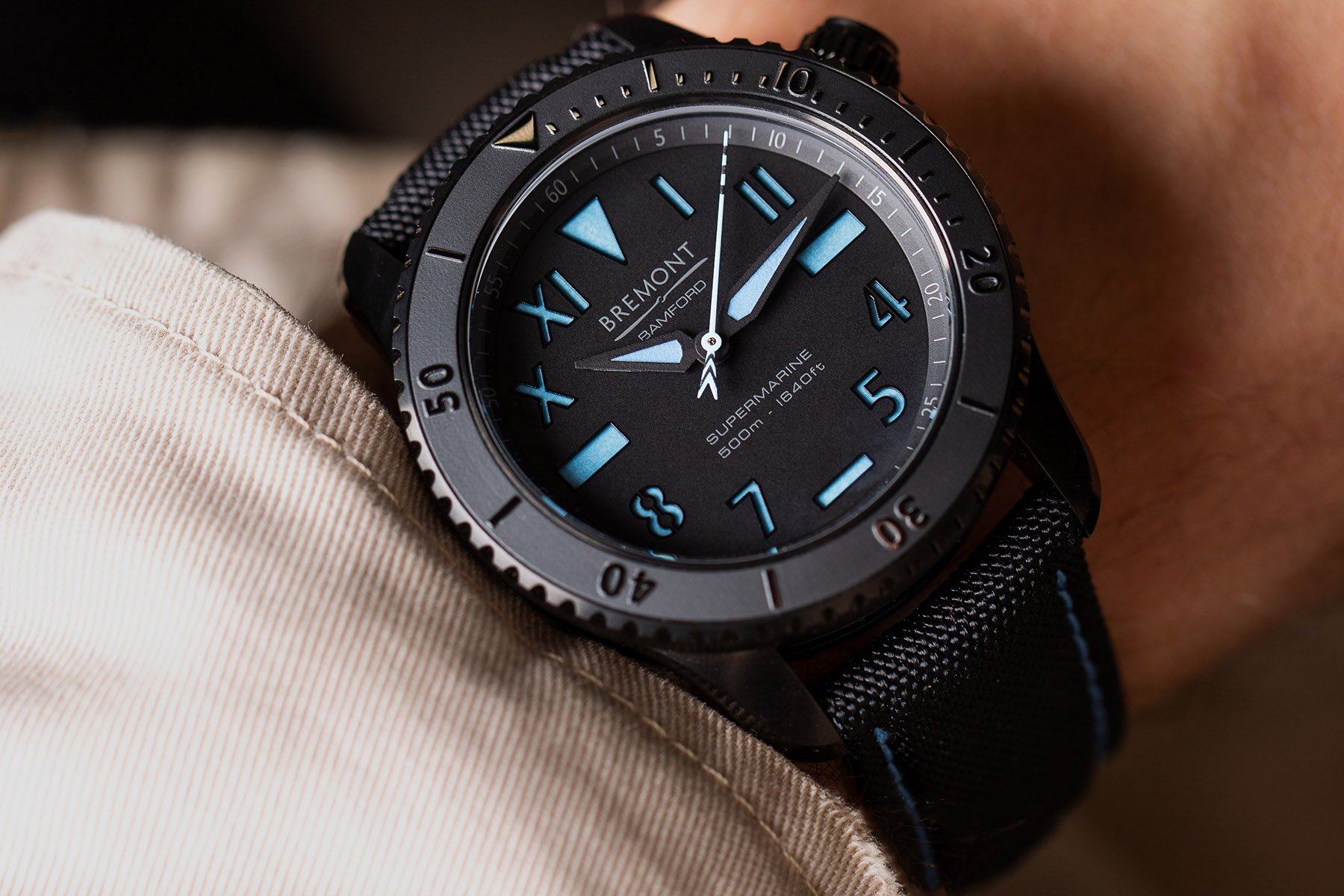 The Supermarine name stems from the British manufacturer of sea-faring aircraft along with the famous Spitfire. The Supermarine collection from Bremont hosts a slew of variations, from chronograph GMTs to mid-size divers, each with the signature Trip-Tick case construction. It all began in 2009, though, with the S500 as the seminal mechanical dive watch from Bremont. This 43mm stainless steel watch case serves as the core base for Bamford’s creativity to flourish. But before we get to the resulting timepiece, let’s remind ourselves of Bamford’s history, as in some way, it explains the design choices of this new watch.

Bamford experiments with dial and hand configurations that ignore the conformity of traditional executions.

From the very beginning, George Bamford specialized in coating customers’ (predominantly Rolex) watches in a proprietary Military Grade Titanium Coating (MGTC) layer that completely altered the appearance to establish individuality. Not always focusing on blacked-out pieces, however, Bamford experimented with dial and hand configurations that ignored the conformity of traditional executions. Eventually, this caught the attention of the watch industry, and LVMH was the first to throw its hat in the ring to officially collaborate and create rare versions of TAG Heuer, Bvlgari, and Zenith watches. When I spoke with George Bamford, he was keen to point out the partnership did not require him to work exclusively with LVMH watches, hence the openness to working with brands further afield. 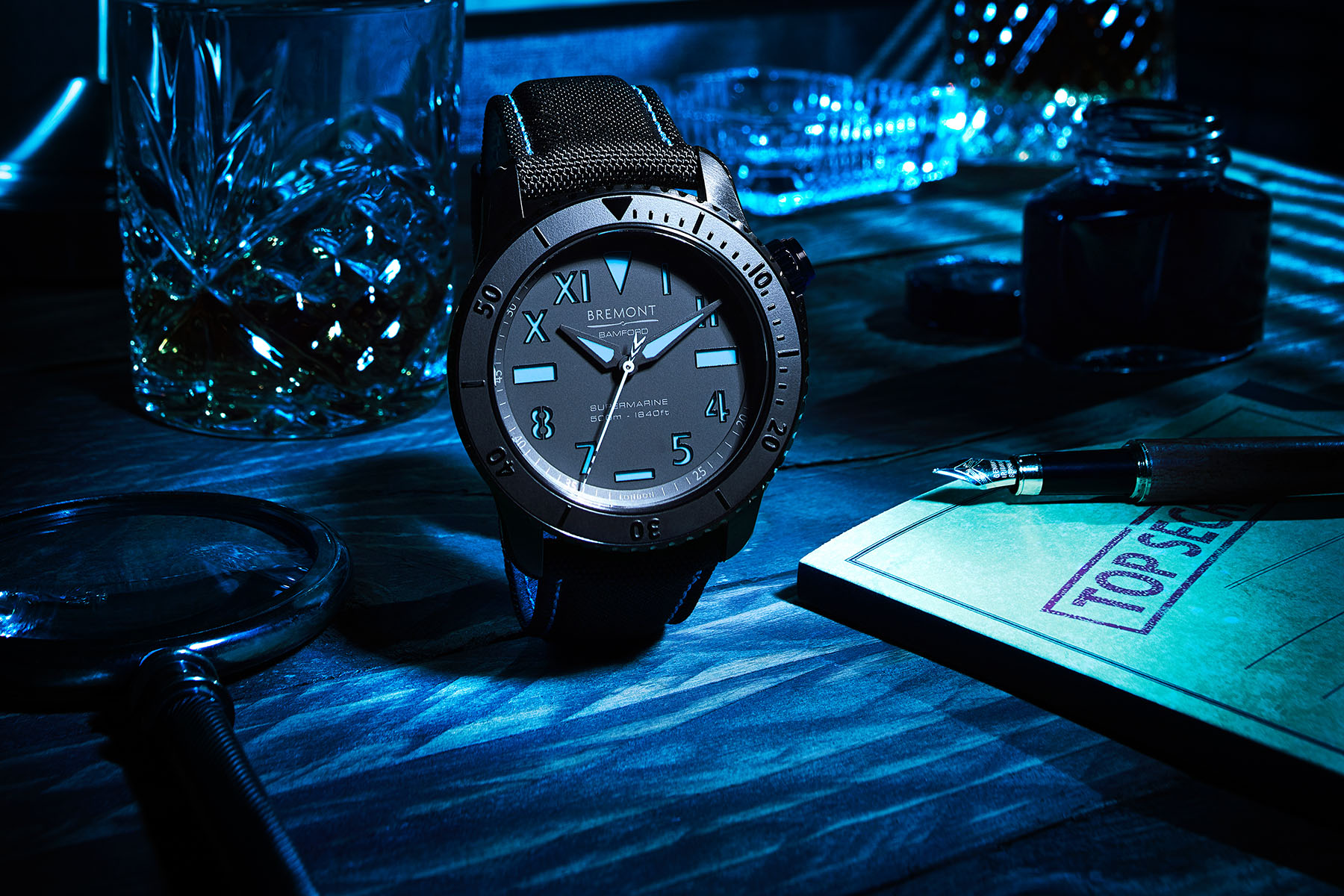 A signature of Bamford that is rapidly becoming a characteristic is the use of light blue amongst a sea of black. We’ve seen this previously with Rob Nudd’s Casio GW-M5610BWD20-1ER, a name that seemingly rolls off the tongue. Yet, the neon blue coloring with dark background has a cyberpunk (no, not that one) aesthetic that gels with the futuristic G-Shock Square template. Bamford proves the concept also works well with more traditional watch designs despite the niche look. On the S500, black DLC coating provides the framework for the standout flourish. Where the regular S500 employs relatively commonplace dot-and-dash indices, Bamford rips up the rule book with a California-style layout. Not just that, the out-sized markers are stenciled to allow the Super-LumiNova layer underneath to absorb light and, in return, bathe the wearer in a vibrant blue glow.

According to the brands, the dial is “California Blue”.

Nicknamed the “California Blue” dial, Roman numerals occupy the north side of the dial, with Arabic digits on the south side. The exceptions are 3, 6, and 9 o’clock with horizontal dashes and the pizza-slice-shaped marker at 12. Notably absent is the date window, which is commendable but also necessary to achieve the full effect of its luminous abilities. Although we partially debunked the term “California dial” in this heated op-ed, I will also refer to the Bremont × Bamford dial as “California” for the sake of general ignorance. Alongside the blue markers are the blackened hands with luminous inserts. The fully lumed center seconds hand is arrow-shaped with chevron patterns on the counterbalance and stripes near the tip. 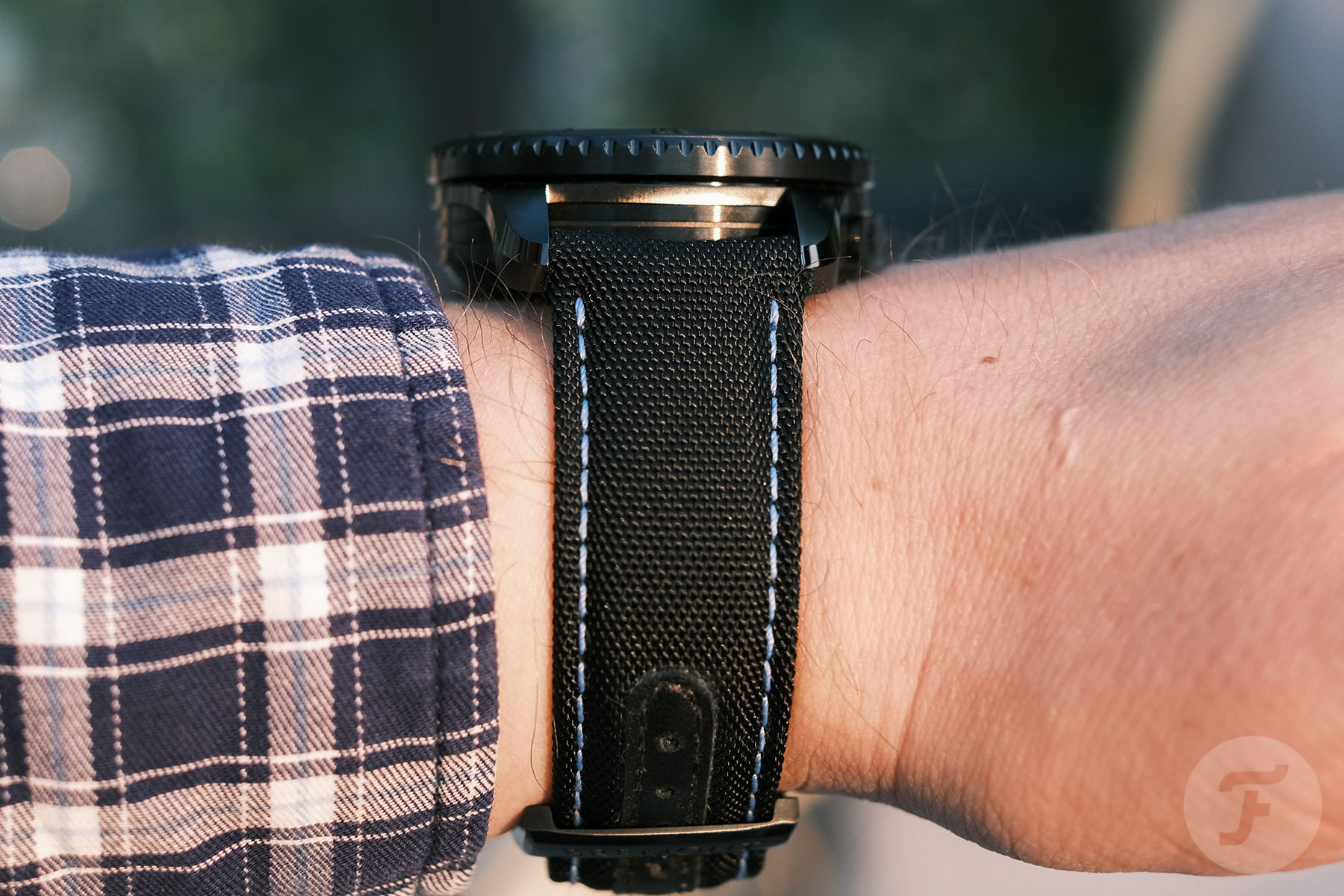 So how does the dial hold up under natural lighting conditions? Well, with such a dark canvas, legibility takes a hit. The indications are clear under direct light or with a suitable luminous charge. Yet, in most cases, the minimal application of contrasting shades left the hands unreadable against the similarly dark dial. I found this frustrating as, at one point, reading the time on the move had me straining my eyes. While many enjoy timepieces for style and confidence, I still rely on analog watches for their intended purpose. I lack the skill of walking and texting on the phone, unlike the smartphone zombies of many populated areas. Therefore, time-telling at-a-glance is essential for my working and commuting day.

It’s less about sliding under a shirt cuff and more about fitting through the sleeve in the first place.

As you can imagine, the clarity of time-keeping is critical on a diving expedition. Yet, with the all-black relief bezel in ceramic, it’s safe to say the watch is more an inland interpretation of a dive watch than a pure tool. However, the frosted ceramic with the raised polished markers is attractive and pleasingly tactile. But ultimately, it leads me to discuss the case height — the S500 is 16.5mm tall. With that thickness, it’s less about sliding under a shirt cuff and more about fitting through the sleeve in the first place. The case is comparable to the A. Lange & Söhne Triple Split. But with the Lange, there is a justifiable reason for the case thickness. Notably, the complex mechanism enables the splitting of three elapsed times (seconds, minutes, and hours). With the Bremont × Bamford, time is its only function, without even a date window to complicate things. 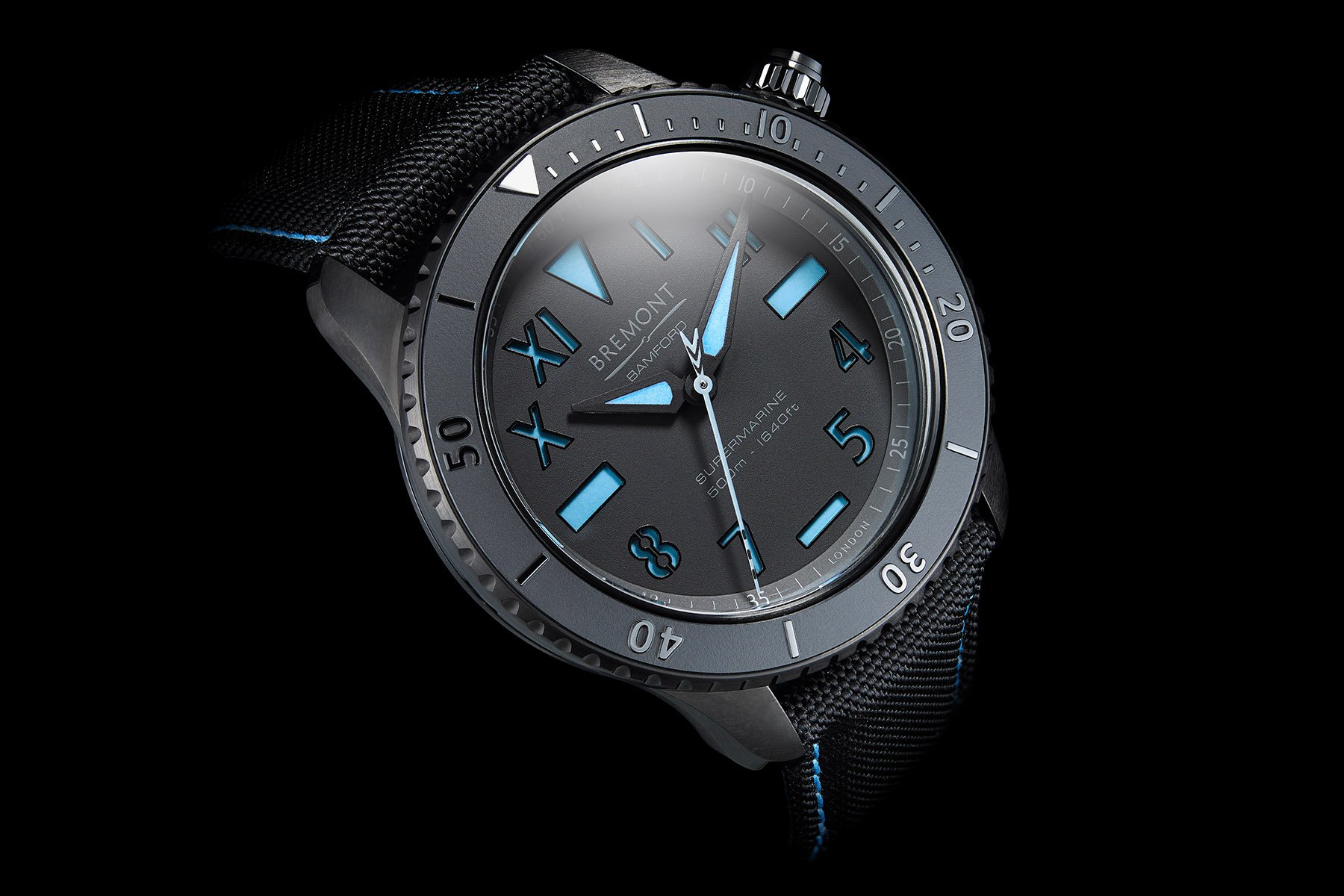 At 43mm, this Supermarine feels substantial on the wrist but not unbearable. With the sloping crown guard, the case feels 45mm in diameter, but the 51mm lug-to-lug keeps things relatively compact and snug. And while I lament the thickness, the automatic helium valve, additional luminescent layer, and impressive 500-meter water resistance contribute to a capable daily beater. The modified automatic ETA 2836-2 that becomes the Bremont BE-36AE also keeps things ticking with a reliable 38-hour power reserve. Affixing the watch to the wrist is a synthetic sailcloth strap with light blue inner lining and stitching and a jet-black pin buckle.

The Bremont S500 Bamford Special Edition is a limited edition of 250 pieces and priced at £3,995. Find out more about this model on the Bremont site as well as the Bamford site, and also enjoy this ‘60s-spy-themed introductory video here. 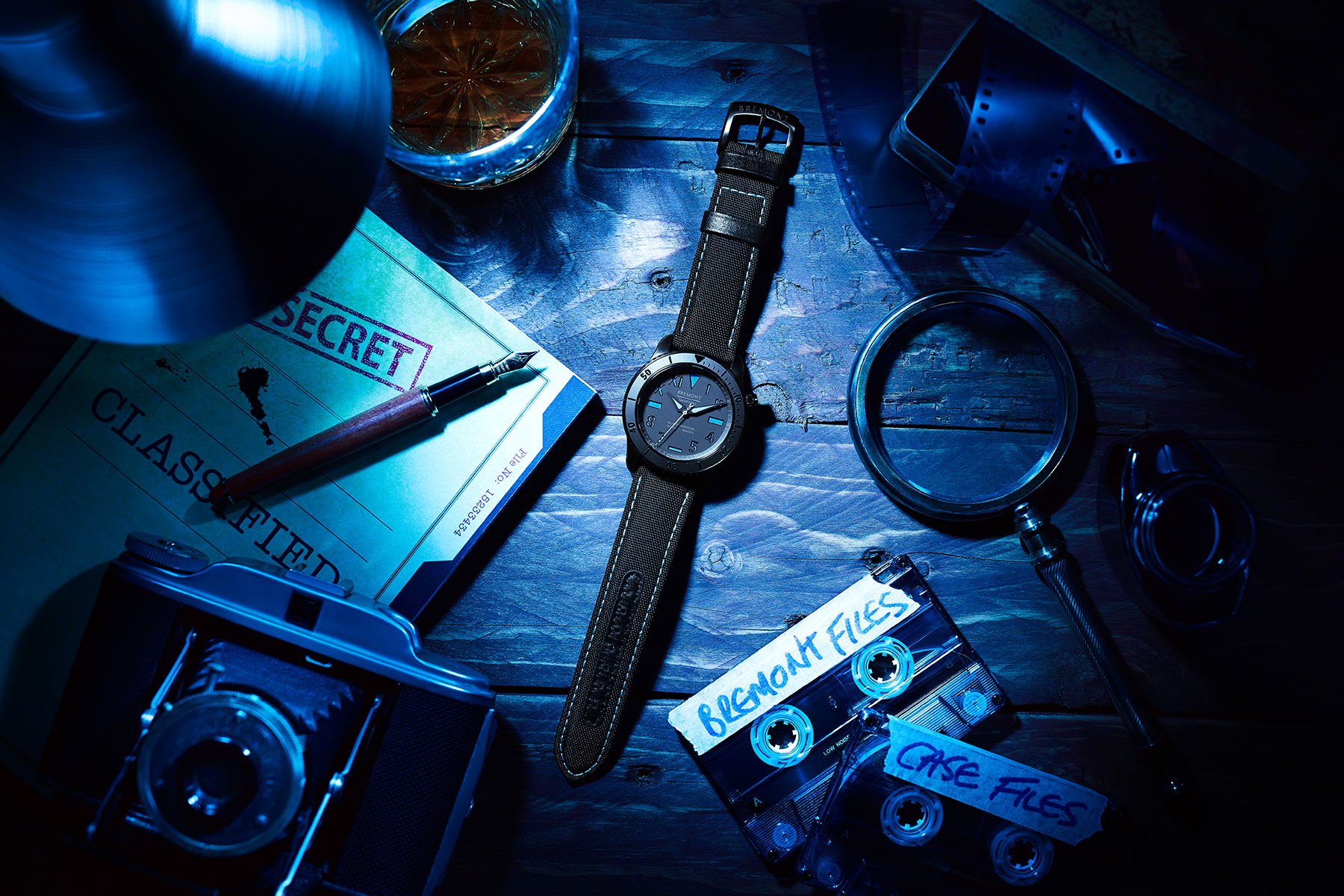 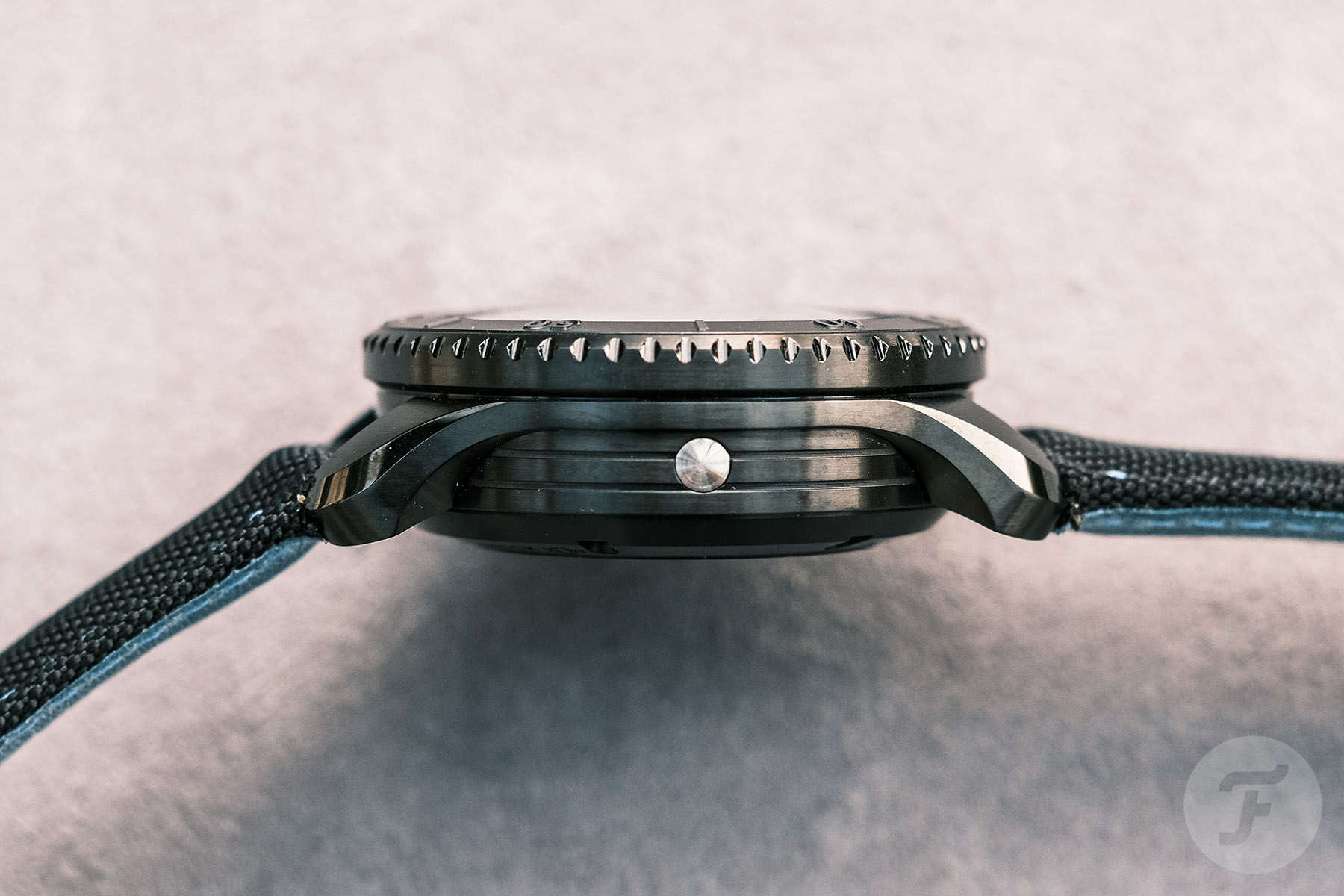 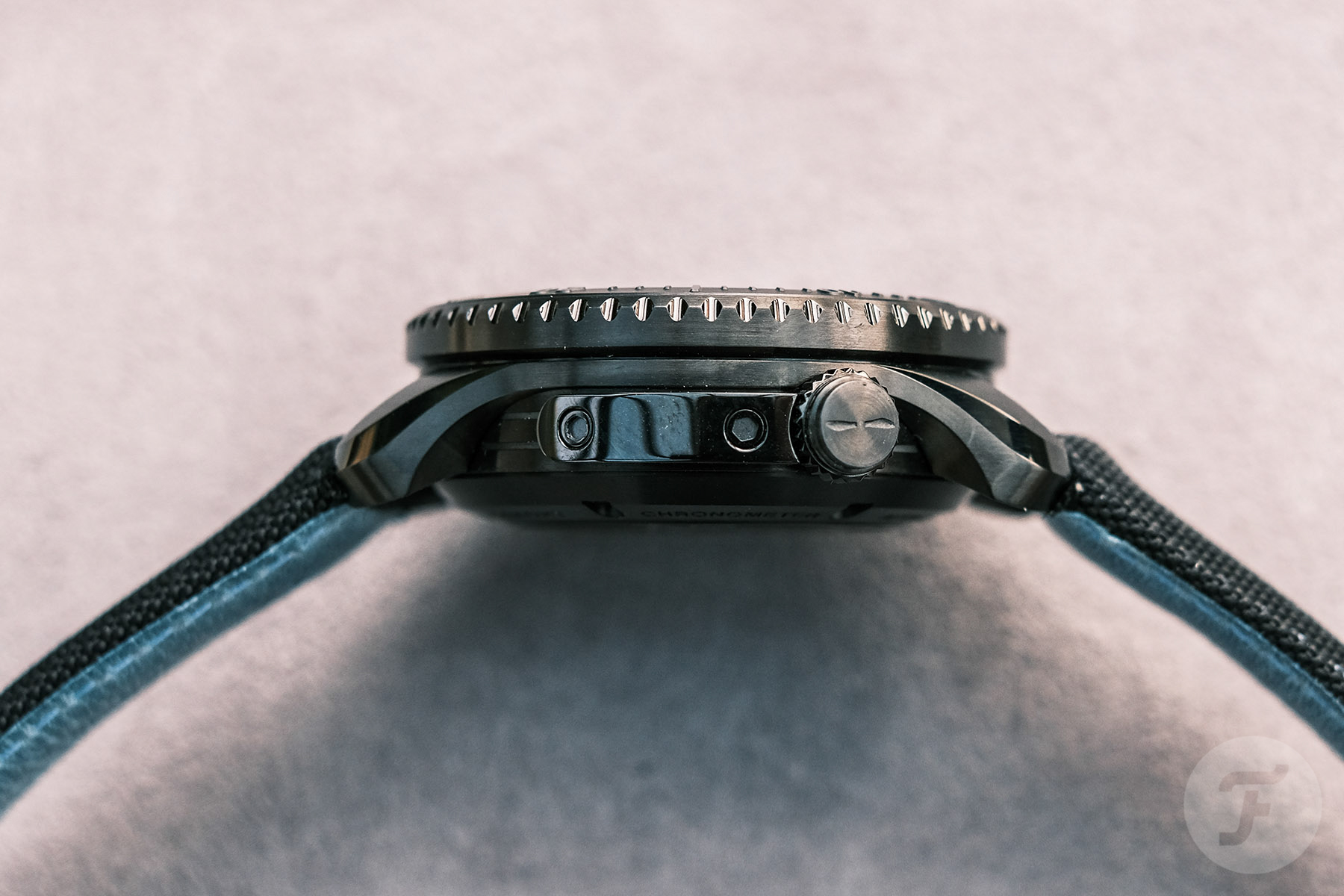 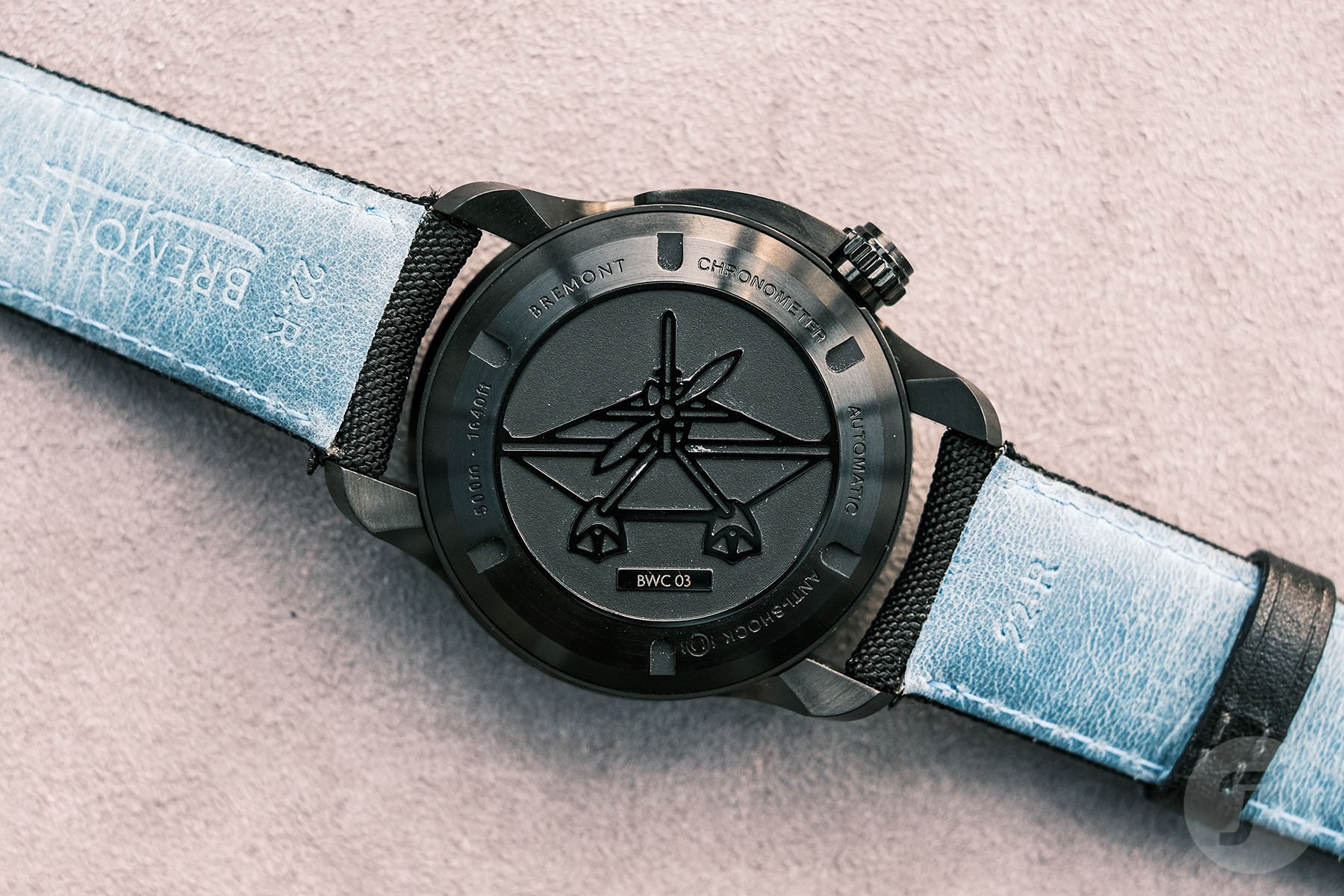