Let’s face it. Here at Fratello we mainly cover serious watches. From Audemars-Piguet to Zenith, as long as serious watchmaking — and preferably a bit of brand history — is involved, it gets our attention. But a totally different watch universe exists. And it might be that, in numbers, more people dwell in this universe than in those of traditional Swiss, German, or Japanese watchmaking. Watches in this segment don’t aim to be serious; their goal is to bring you lighthearted fun (as well as the time).

The Casio × PAC-MAN Collaboration Model A100WEPC is indisputably a fun watch. No technical high-end aspirations, just a good vibe. In fact, six of the Fratelli ordered one. Unfortunately — to date — only four were able to acquire the watch. And you thought only Rolex watches are hard to get! 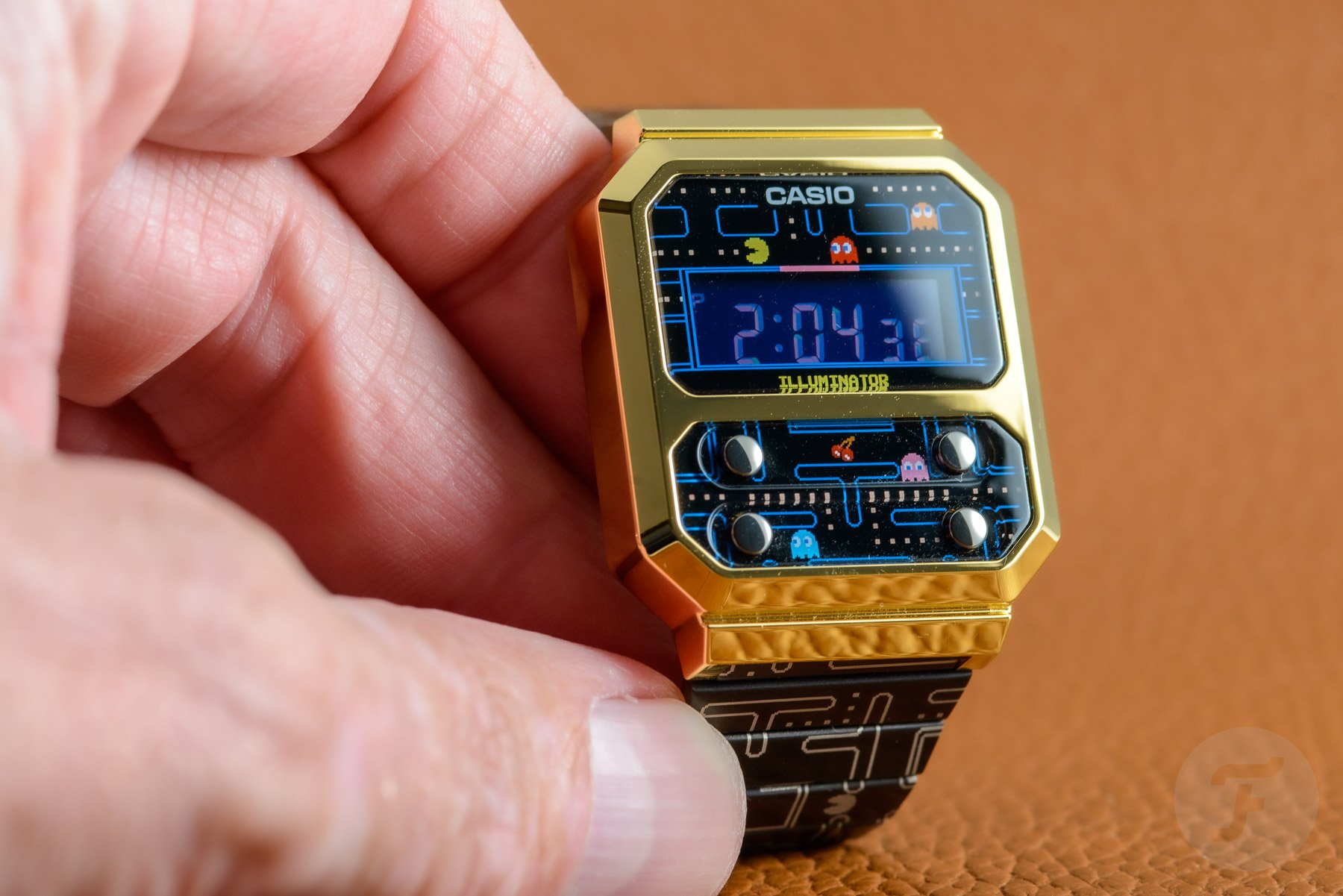 The, in my opinion, rather thin reason given for this collaboration is that Casio and PAC-MAN are both with us for over forty years. I would have been a bad journalist if I hadn’t checked that. But it’s true. Founded in April 1946 by Tadao Kashio, it was only in the eighties that Casio’s wide variety of budget electronic wristwatches became popular. Until then, the brand was mainly known for its electronic compact calculators.

PAC-MAN, now owned by BANDAI NAMCO Entertainment Inc., was released as an arcade cabinet game on May 22nd, 1980. So that’s indeed, over forty years ago as well. Mr. Toru Iwatani developed the PAC-MAN game in 1979, working closely with programmer Mr. Shigeo Funaki. Just like the importance of Casio’s accessible electronic wristwatches (that brought digital precision timekeeping to the masses), PAC-MAN caused a distinct BPM and APM period in video game history. 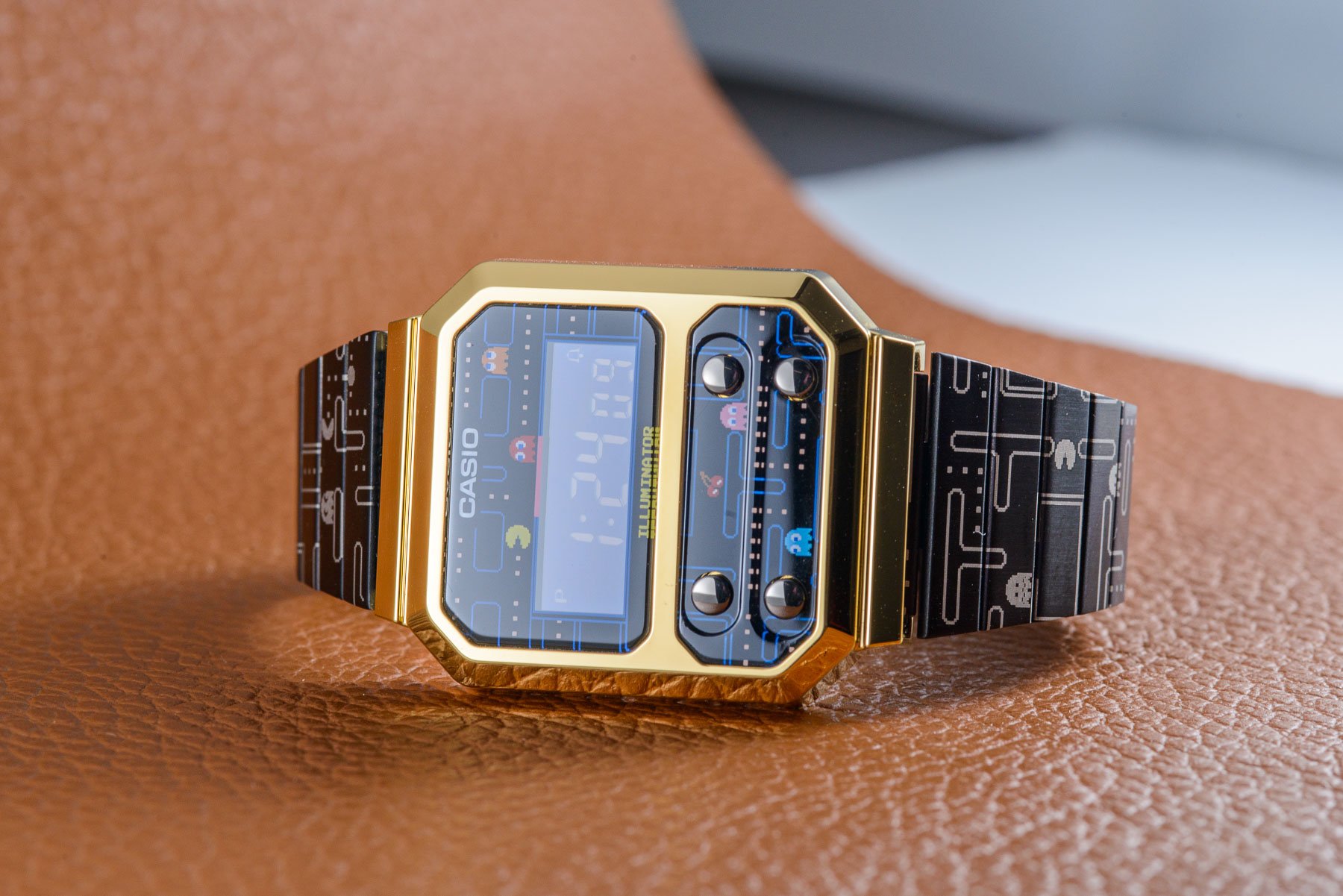 So, with forty-plus years of the significance of both Casio Watches and PAC-MAN proofed for accuracy, let’s agree that it was a good idea to have a collaboration. By the way, it wasn’t the first time there was a PAC-MAN collaboration watch. Last year — to commemorate PAC-MAN’s 40th anniversary — Timex presented one as well. In my opinion, it was a poorer attempt than this execution, but Tomas wrote about in this Hot Take article regardless.

The Casio A100WEPC-1B, in full, is a variation on the A100s found in Casio’s Vintage line-up. Rumour has it that the PAC-MAN variation is a one-shot production, which caused it to quickly sell out in the various official online Casio shops. If you’re looking to buy one, my advice would be to contact a local Casio watch retailer; they might have separate stock from the online Casio shop. The newly introduced A100 series is a revival of the iconic F100 released in 1978, which got rock-star status by appearing in the classic 1979 movie Alien.

The other three models in the A100WE series have a solid stainless steel case, however, the case of the A100WEPC PAC-MAN is said to be made of resin, topped by an acrylic glass. The good thing is, it’s definitely well disguised. Even owning the watch, I find it hard to tell the difference. The gold chroming effect works really nicely against the stainless steel bracelet and that it has a black ion-plated (IP) finish with a cool PAC-MAN design laser-engraving.

The above, again, makes clear that the importance of the A100WEPC-1B definitely doesn’t come from its technical specifications. The relevance of this watch comes solely from the design of this Casio × PAC-MAN collaboration, which is playful and inspired by one of the world’s most iconic arcade games. 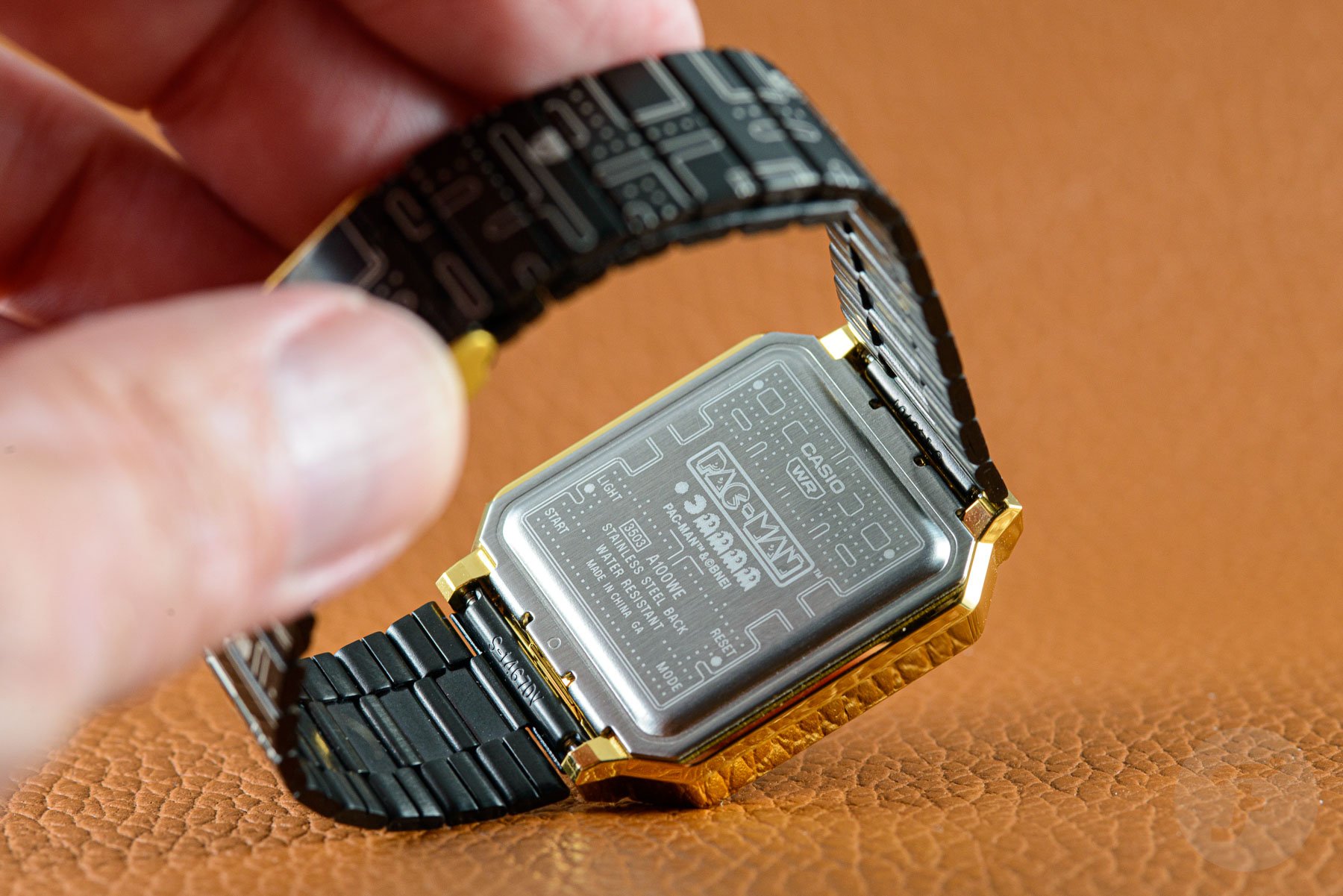 Familiar PAC-MAN characters can be spotted on the watch’s face and bracelet. The four ghosts Blinky, Pinky, Inky, and Clyde, along with Pac-Man himself, are all present and correct. One part of the bracelet shows PAC-MAN eating dots while escaping from a normal ghost, while the other part shows PAC-MAN, after eating a Power Pellet, chasing a ghost turned blue. Even the case back is an integral part of the PAC-MAN design. It’s engraved with a game screen motif and the classic PAC-MAN logo.

Beyond the watch, the PAC-MAN design extends to the packaging. Featuring the game’s characters, logo, and score screen on the outside, while the inner case is reminiscent of an arcade cabinet. Unlike the regular packaging, this one is designed so that it doubles as an attractive display. Most of us will understand that a watch like this might not get much wrist time. It smacks of a collector’s piece that will be cherished as a fun object more than a daily timepiece. It perfectly fits the bill of a watch many of us would buy but never wear. We’d cherish it, of course, but it might well end up on display. Thankfully, the provided packaging does not disappoint in that regard. 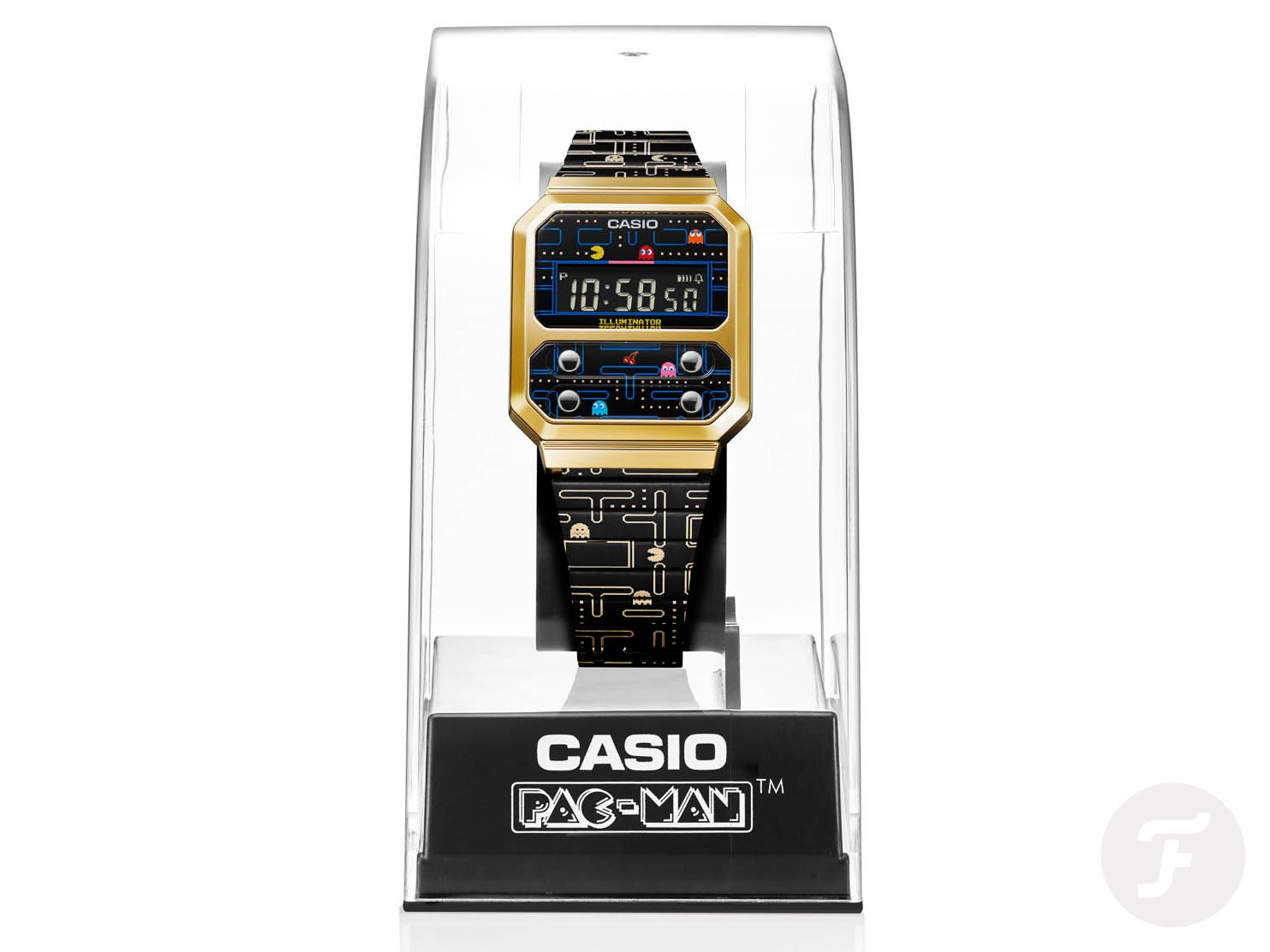 Casio and PAC-MAN fans around the world wholeheartedly welcomed this collaboration piece. Probably to a larger extent than Casio expected, causing the watch to sell out through the brand’s official channels in only a few hours. That must be a pity and very disappointing for the fans who missed it and for Casio, who could have sold many more pieces of the A100WEPC-1B. Of course, the shortage might as well be caused by the agreement Casio made with BANDAI NAMCO Inc. Such contracts often provide a maximum number for the use of the name and imagery.

A complaint heard in online enthusiast groups was that the watch doesn’t feature a playable game. Of course, that would have been nice, but I don’t think it was the purpose of this product to be a miniature arcade game. It is just a watch, decorated to celebrate the forty-plus years existence of both Casio electronic wristwatches and the PAC-MAN arcade game. To me, Casio and BANDAI NAMCO succeeded in this very well — even better than Timex did in the past. In general, people who were lucky enough to get one, seem to be very happy with the product. I have been wearing mine three days in a row now and still have no intention of taking it off any time soon! 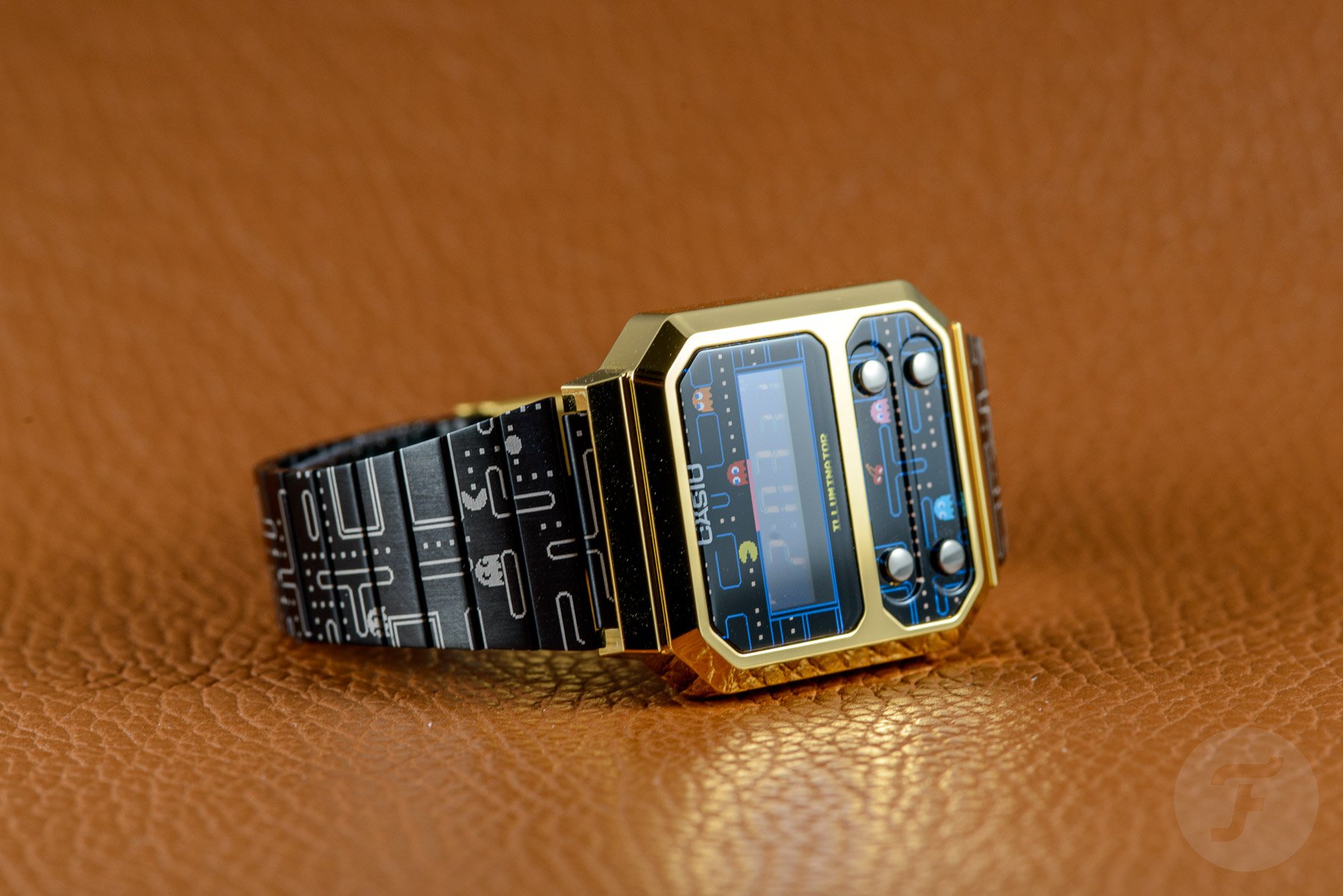 As said, the Casio × PAC-MAN is no technical masterpiece. I’d describe it as flimsy rather than rugged. But it definitely lives up to its task, which is to bring some fun to the all too serious world of watches. The black face and bracelet resonate nicely with the gold-tone case which makes for an attention-grabbing combination. I would say that the bracelet could have been a bit more substantial. Perhaps the negative display could have been more readable. And, if I’m being really picky, the amber backlight could have been a bit brighter. Finally, one other thing that caused me some consternation is that the Casio module 3503 used in this piece does not offer the possibility to show the time in 24-hour format. I’m not even asking for the date in DD.M format.

None of the above was important enough for me to reject the Casio × PAC-MAN A100WEPC collaboration model though. With a list price of 10 cents below €100, it was an easy decision. It is, however, quite a bit more expensive than the other three models in the A100WE line-up. The standard versions retail for €65–€75. But hey, the awesome PAC-MAN design and the custom box easily account for that difference in price. 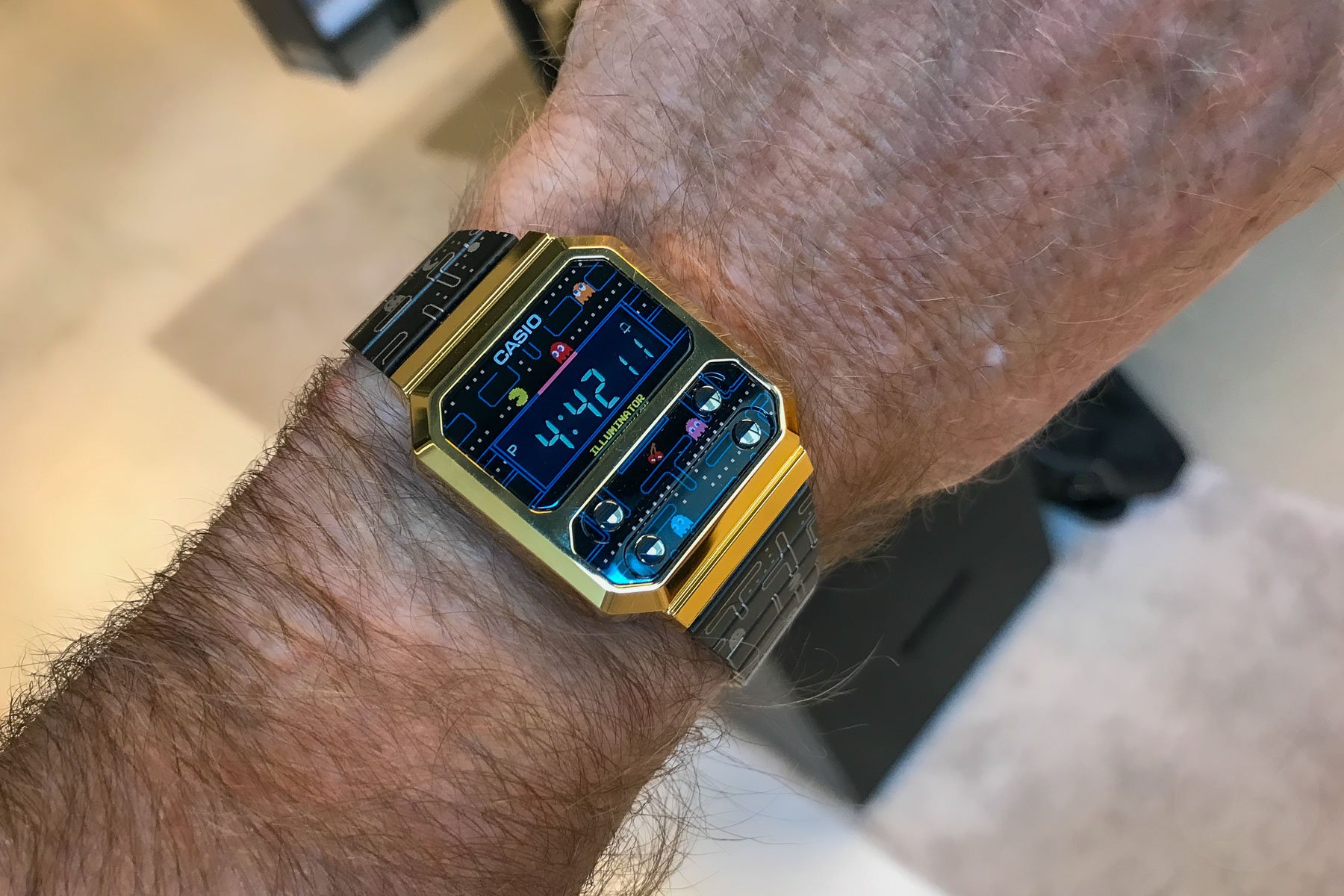 Would you let us know in the comments if you like content like this on Fratello? Are you interested in fun watches as well, or would you rather stick to more serious watches? And make sure to look at an interview with PAC-MAN creator, Mr. Toru Iwatani, here on YouTube.