“Retro done differently.” This is my impression of the Rado DiaStar Original 60-Year Anniversary Edition. It n is a revamped iteration of a 1960s futuristic classic that honors the past in a contemporary way. And in a world of reinterpreted tool watches, the DiaStar stands out because it’s more like a jewel — one with excellent material and functional qualities, that is. It is probably an acquired taste, but so is coffee, isn’t it? And since we’re on the topic of deviant styles, what do you think of the H. Moser & Cie. Endeavour Centre Seconds Genesis with its 3D-printed parts? How about the Jaquet Droz The Rolling Stones Automaton with its revolving stage including miniature instruments? Yes, there’s plenty to discuss in this edition of Coffee Corner Watch Talk.

Earlier this year, Rado released four new Rado DiaStar Original models to commemorate the 60th birthday of the flying-saucer-like watch. My favorite one of the four is the DiaStar Original 60-Year Anniversary Edition designed by Alfredo Häberli (ref. R12163118, €2,100). Of the four revamped and redesigned watches, this “designer edition” is the most adventurous and bold. Häberli both got and allowed himself maximum creative freedom to reinterpret the futuristic original. 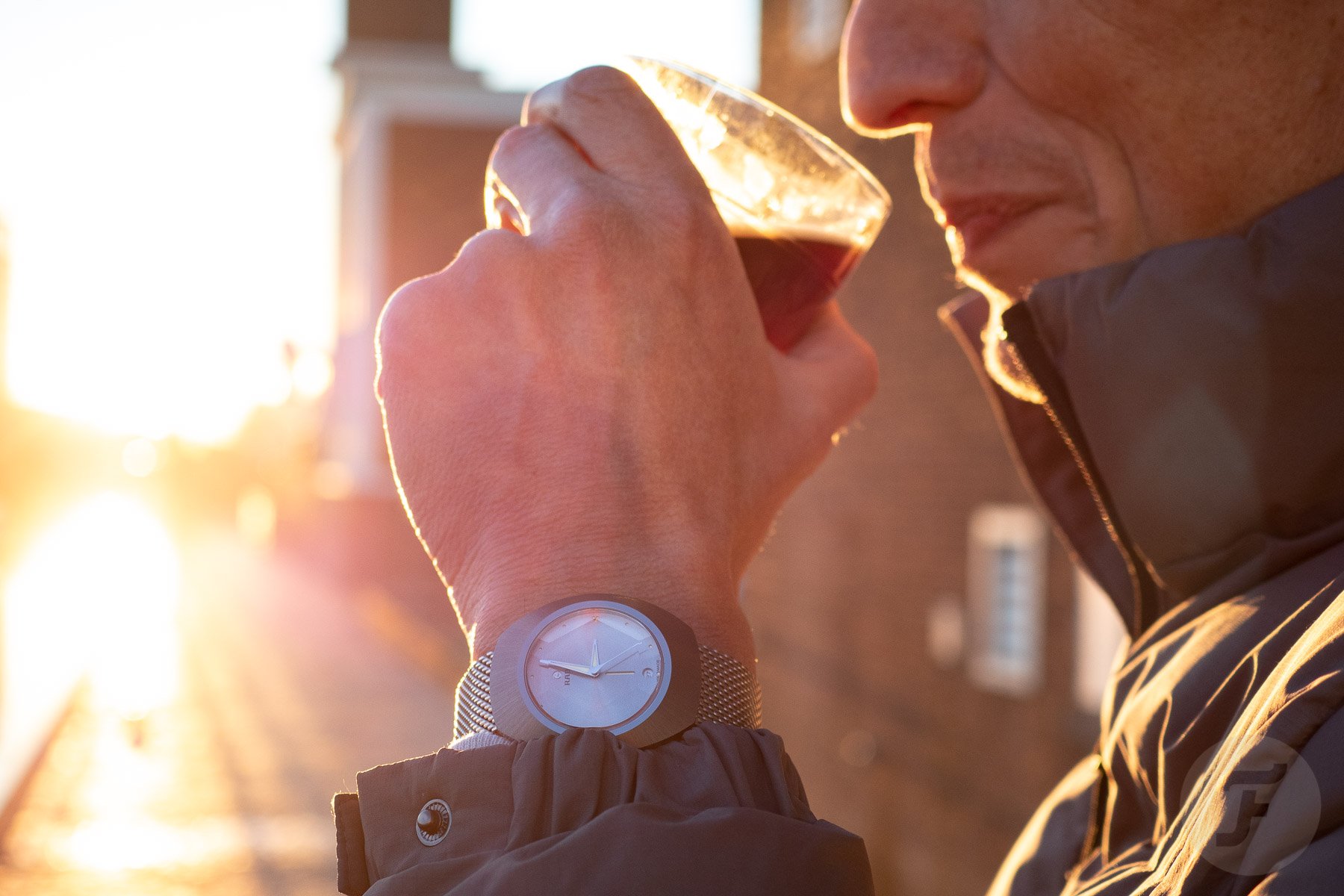 The biggest factor in my preference for this Häberli-designed DiaStar is its conical bezel in radially brushed Ceramos. The matte bezel looks more industrial and solid compared to the gleaming bezel on the other three DiaStar Original models. And there’s also the faceted-hexagon sapphire crystal, the circular-brushed metallic gray dial, the elegantly tapered hands, plus the off-beat day/date indicator. It’s not off-beat because it has a color scheme in gray and natural-colored Super-LumiNova, but because it doesn’t specifically tell the day. Instead, it graphically shows the progression of the week, allowing the wearer to choose what day it starts on. I think Monday is the first day of the week, but some argue that it should be Sunday. This watch settles that (rather obscure) debate. 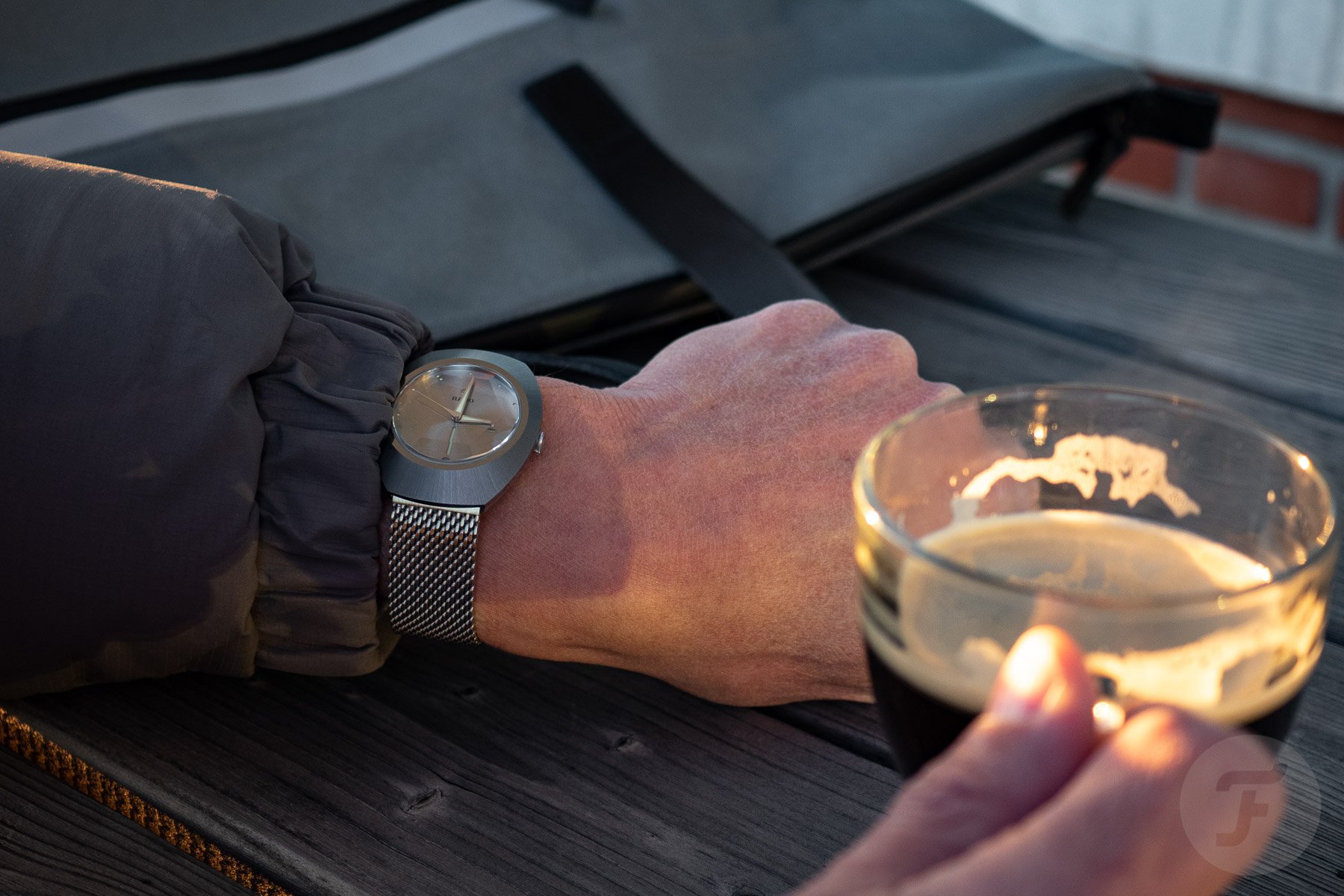 Scratchproof Ceramos on the outside, invisible gold plating on the inside

The new Ceramos bezel is slightly sleeker than the bezel on previous DiaStar models. Combined with the steel middle case, case back, and crown, we have a watch that measures 12.3mm thick, 38mm wide, and 45mm long — not too big, not too small. It has the right dimensions, design, and wrist stance to get noticed, but it’s not an exuberant design object that cries for attention.

Inside the new DiaStar Original beats the gold-plated Rado caliber R764. That’s an automatic movement with an 80-hour power reserve and an anti-magnetic Nivachron hairspring. You can’t see that in this particular version of the Swatch Group’s shared Powermatic 80 movement because it sits behind a closed snap-on case back. However, despite the absence of a screw-down case back, the new DiaStar Original is water-resistant to 100 meters. 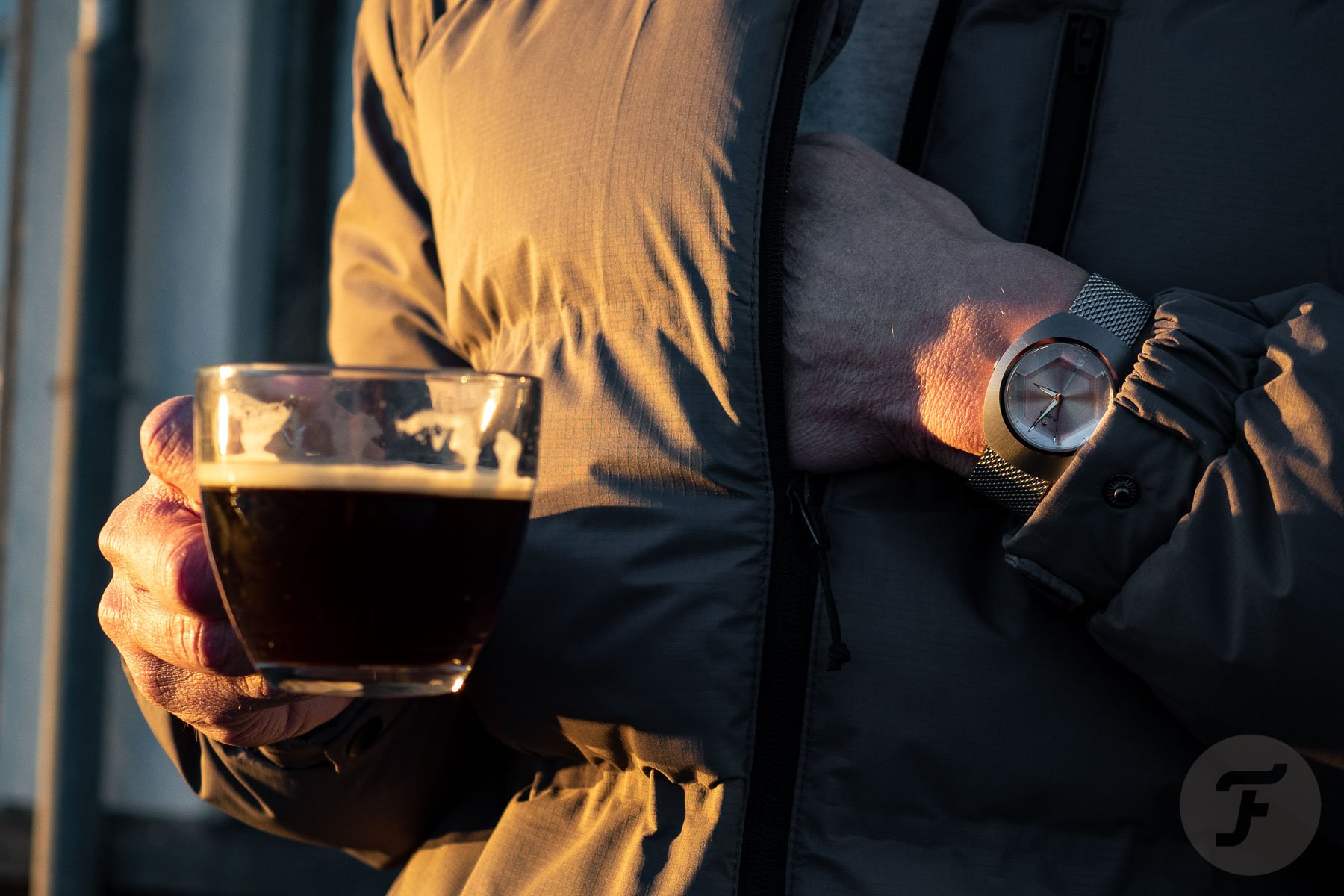 Would I wear this watch to go for a swim? No, it feels like this watch needs to be carefully paired with a well-considered outfit. The clever and subtle design deserves the companionship of a nice cashmere turtleneck, for instance. You can wear it casually or in a more formal situation because of the watch’s unicolor style. It comes with a steel mesh bracelet and a textile strap, of which I prefer the first option. It wears comfortably, and the all-metal look strikes me as cool, industrial, and hard. Yet, at the same time, it also appears sleek, refined, and elegant. What I also like is that, at first glance, the color gray dominates, but a second look reveals the magical reflections of the faceted crystal interacting with the dial below. As I wrote before, the new DiaStar Original is retro, but it’s retro done differently, and I like it like that. 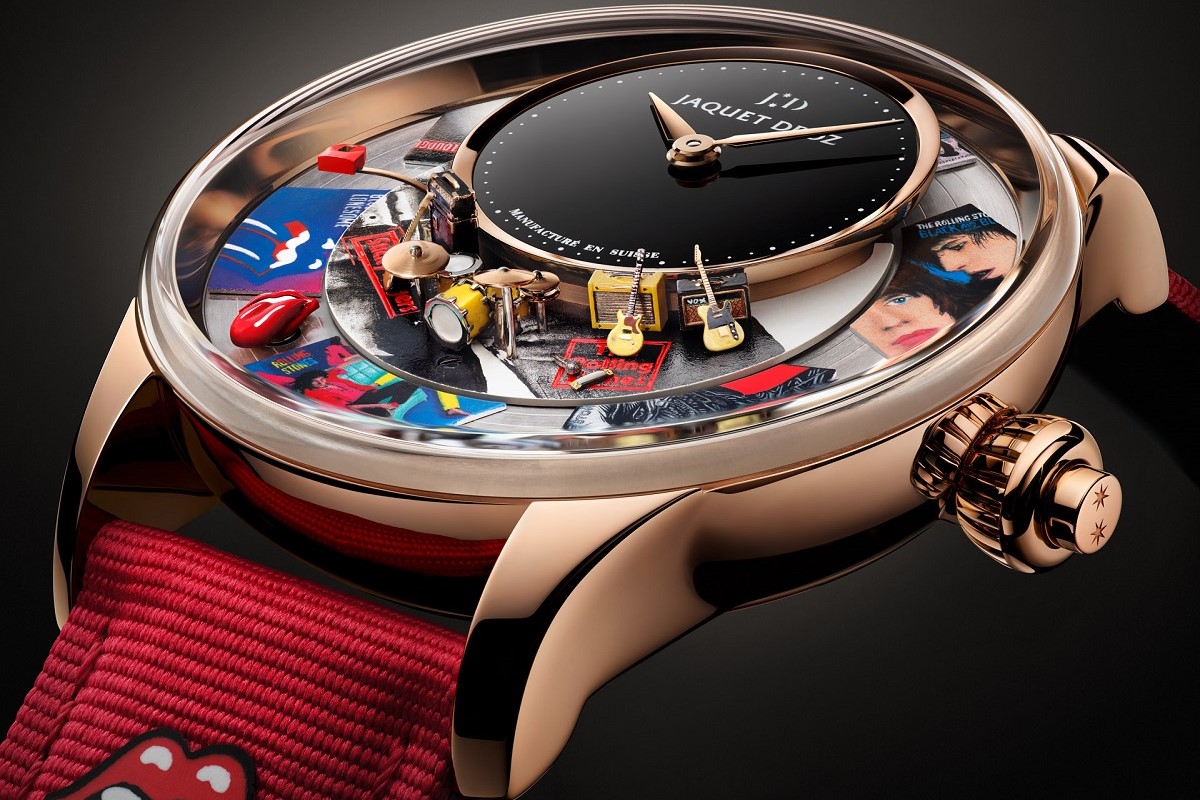 “I can’t get no satisfaction” is true for everybody but one person. Yes, the 1965 song by The Rolling Stones predicted the future because the Jaquet Droz The Rolling Stones Automaton is a unique piece. It’s been a while since Jaquet Droz released a new watch. The last watch we featured was the rather-gorgeous Grande Seconde Quantième in 2020. And there’s a reason for that: the brand has changed its strategy quite rigorously. Jaquet Droz will, from now on, dedicate itself to very special people. Unique people. Collectors that operate in the upper echelons of the watch world. Jaquet Droz is now focusing exclusively on these people by creating unique, customized timepieces with very special features for them.

Customizable automatons, to be precise, just like the founder of the brand, Pierre Jaquet-Droz (1721–1790). I have seen one of Jaquet-Droz’s crazy-complicated automatons, The Writer, in action once. It was miraculous because the 18th-century robot, dressed like a boy from that time, could actually write a pre-programmed letter. 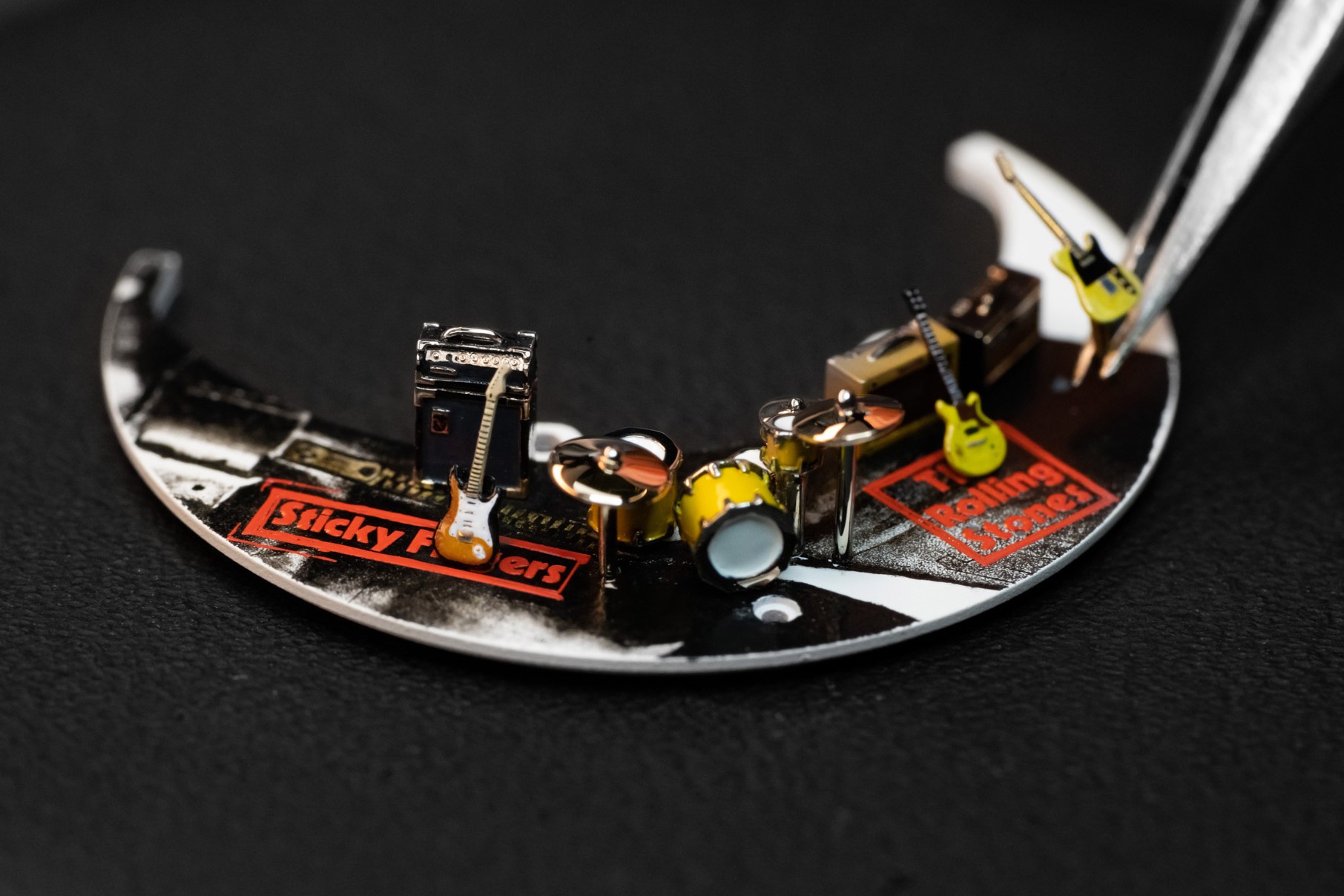 Not a writer but a rock band

The modern brand Jaquet Droz has now released news about its first customizable automatons made for someone who can be sure that no one else will get one. The Rolling Stones Automaton is a 43mm red gold watch with a miniature reproduction of the Stones stage. What you see on “stage” are Ronnie Wood’s Fender Stratocaster leaning against his amp, the minimalist drum kit of the late Charlie Watts, and, of course, Keith Richards’s Fender Telecaster with not six, but just five strings. The guitars and their amps are handcrafted from a block of red gold, engraved, and then painted. And Charlie Watts’s cymbals are made of a slightly curved gold disc, and the various drum toms have a diameter ranging from 1.2 to 2.3mm. 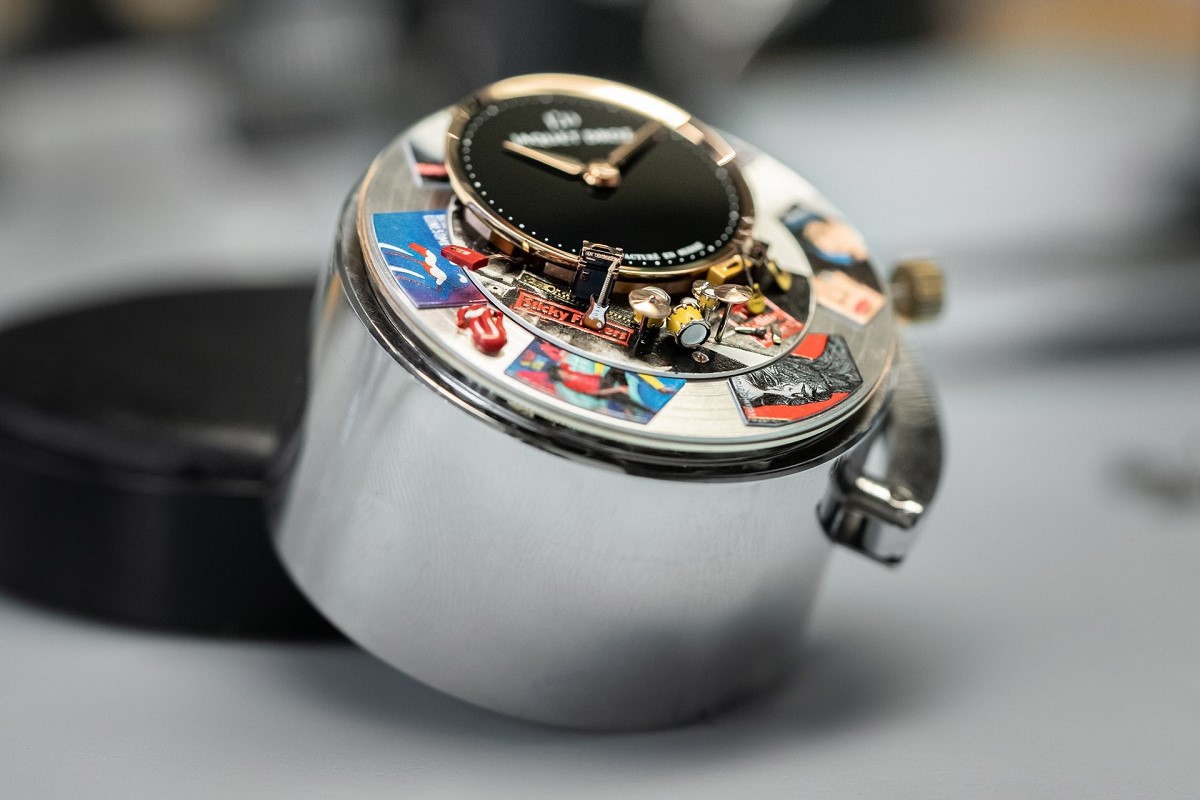 The stage, which rotates on demand, is decorated with six iconic album covers from 1971 to the present day. If you decide you want a watch like this, Jaquet Droz will let you choose any album covers you like and have an artisan reproduce them. The rotation of the stage lasts about 30 seconds, and it can be operated up to eight consecutive times thanks to the push-piece inserted in the crown. And there’s more action. The power reserve is indicated at 8 o’clock by a cam restoring the articulated arm and the diamond of a record player. And just below, the famous Stones tongue logo moves up and down as it simultaneously moves left and right.

What do you think, is this Rolling Stones Automaton a successful comeback for the horological artist Jaquet Droz? Anyway, if you want to find out more about this wearable rock set, of which a maximum of 23 different thematic pieces will be produced, please go to this special page on the official Jaquet Droz website. 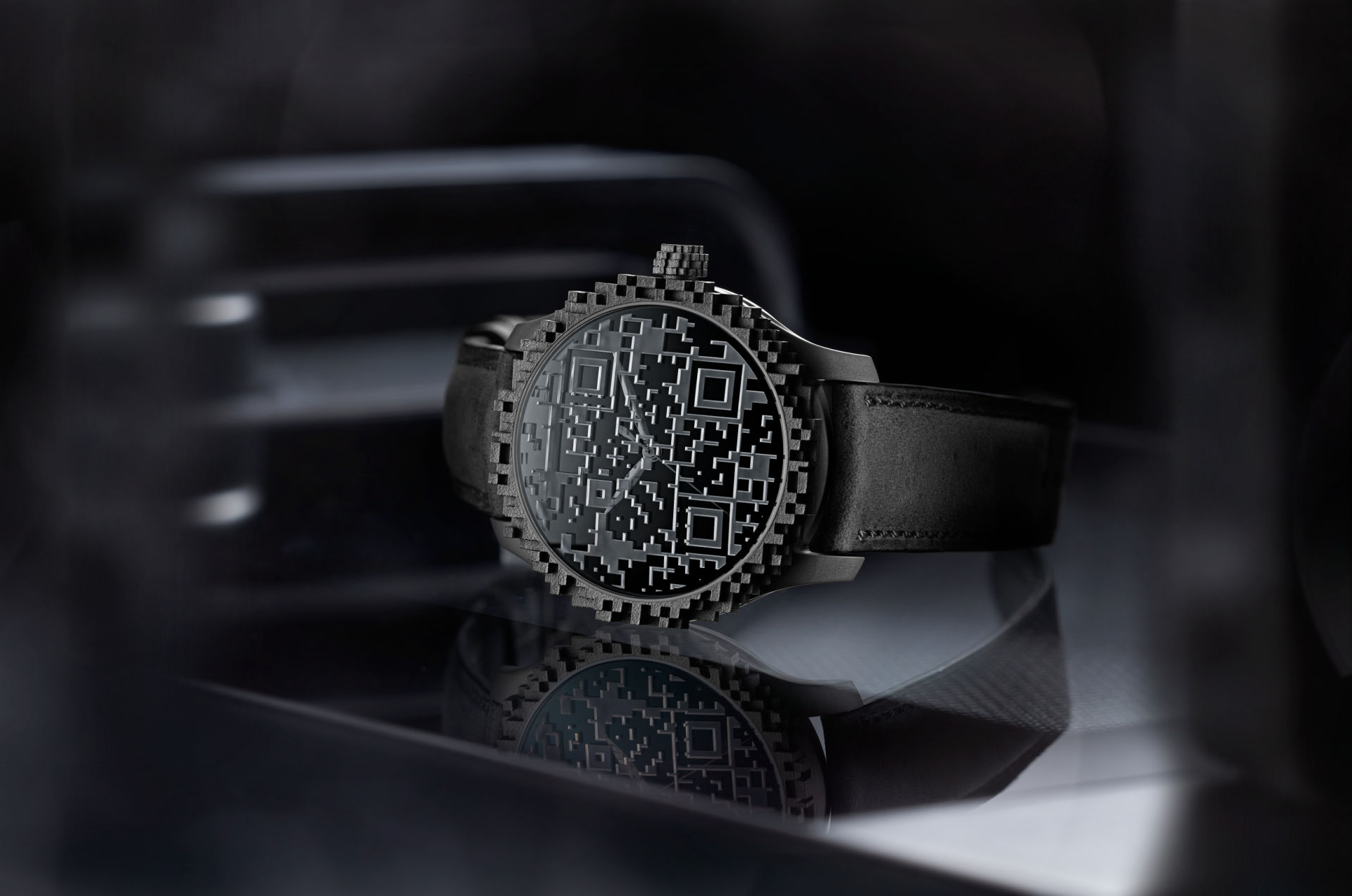 You can pay for the H. Moser & Cie. Endeavour Centre Seconds Genesis or 01100111 01100101 01101110 01100101 01110011 01101001 01110011 in cryptocurrency. You should because this limited edition of 50 pieces is offered “… through a holistic ecosystem, including blockchain watch authentication, digital asset,s and its own dedicated metaverse space…” as Moser writes in the press release. Everything about this watch is challenging — the looks, the concept, and the statement that the brand wants to make. What we do know for sure is that this watch is a merger of virtual and tangible elements. And the tangible ones that stand out the most are the 3D-printed titanium crown and bezel with a pixilated look. 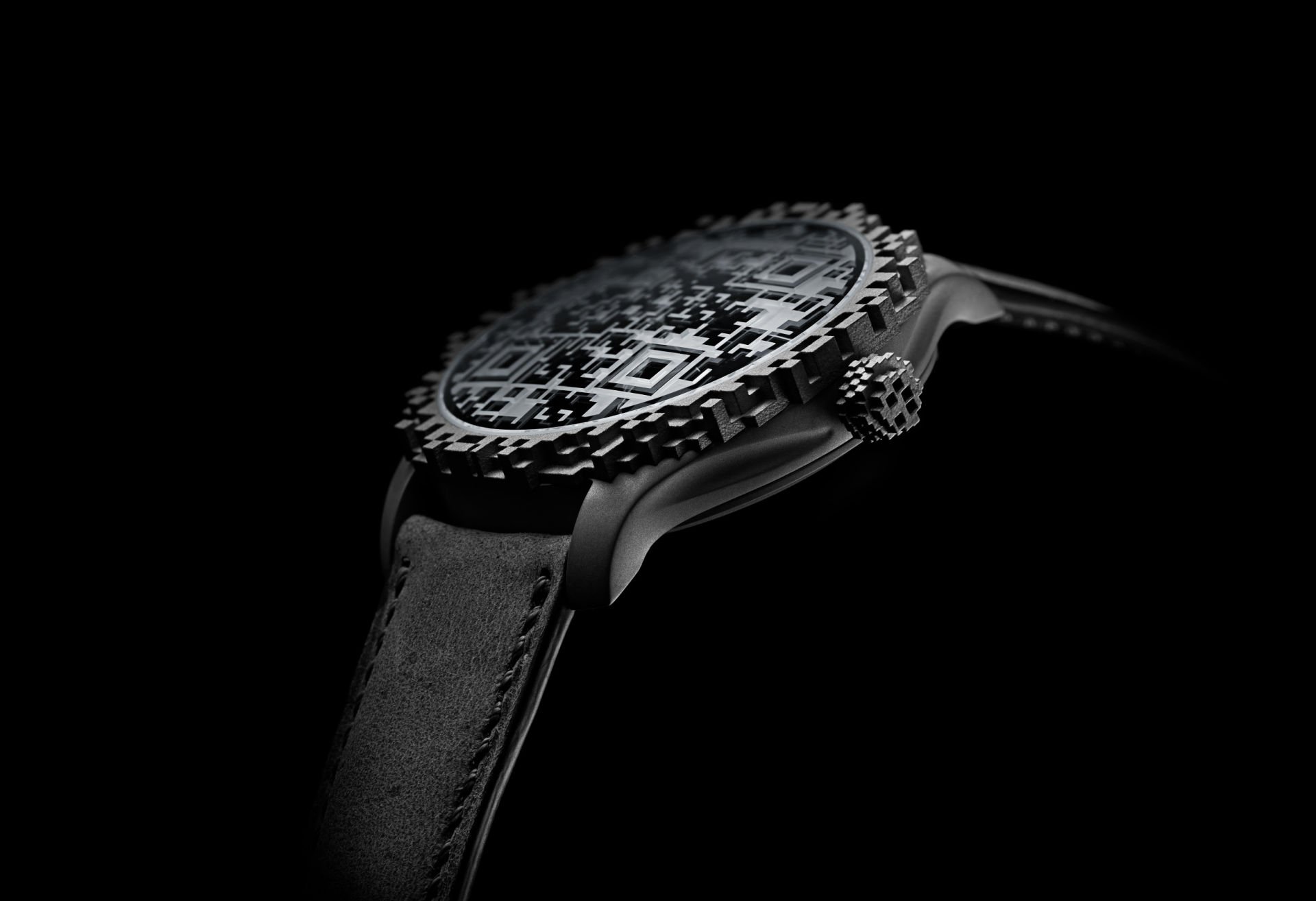 A virtual tour and practical perks are included

The Genesis with its micro-blasted steel case is the watch in an exclusive triptych that will give each owner access to the next two timepieces. Genesis, or 01100111 01100101 01101110 01100101 01110011 01101001 01110011 in binary code, is a hybrid product. In other words, you get a watch to wear in real life, but because of a unique QR code engraved on its sapphire crystal that allows you to verify ownership of the watch, you also acquire privileged access to the entire dedicated digital and virtual ecosystem.

That includes an immersive metaverse experience that lets you discover the history of the brand and meet the Moser team in a new dimension. One of the practical perks is that you can purchase certain future limited editions. You also receive a membership to the Moser community, and both the Genesis timepiece and the associated digital assets will benefit from a special insurance service. 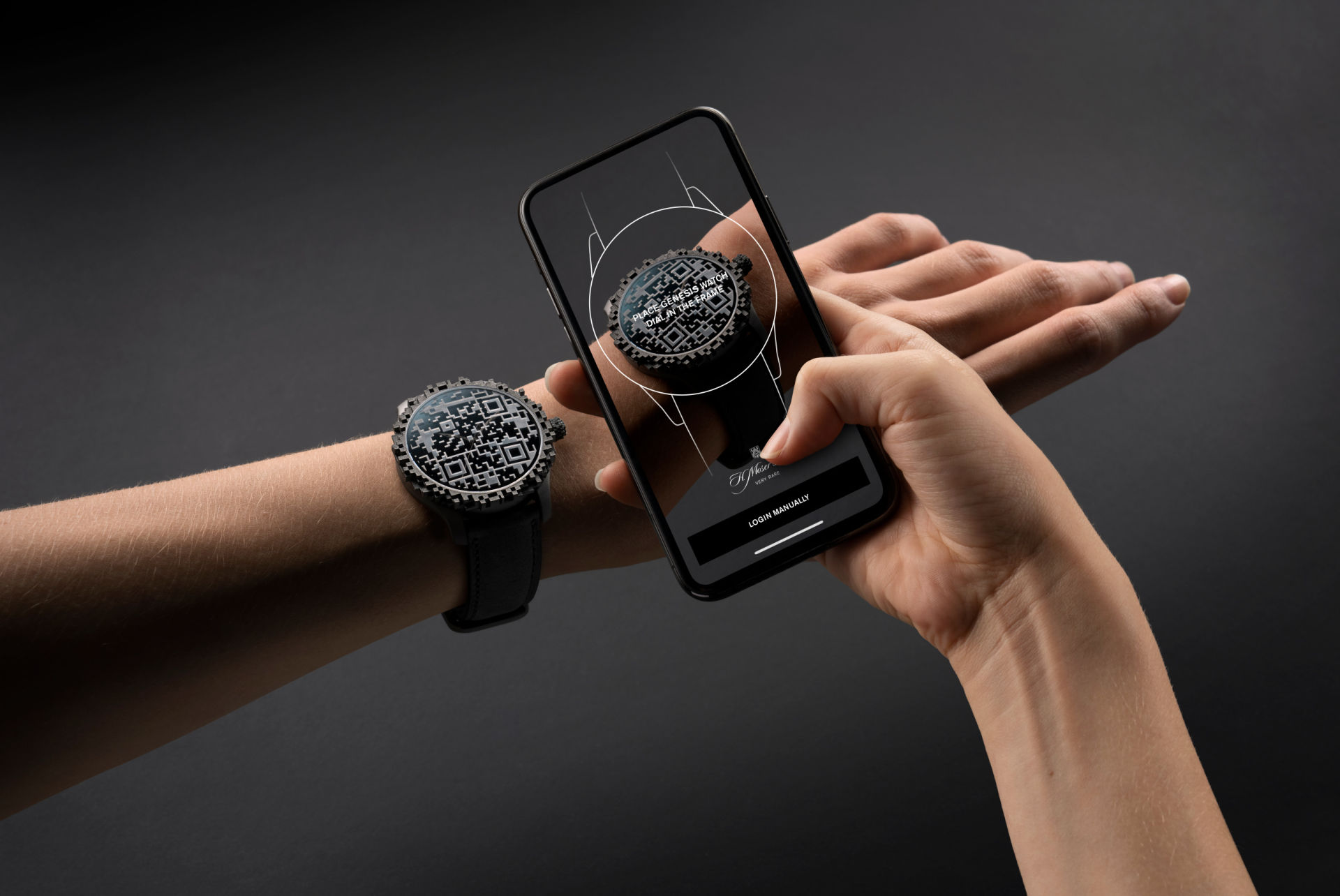 Please go to the special Moser Genesis website for more info about the 40mm watch with its Vantablack dial and all the partners that are involved in this project. You might also find out what the price will be. 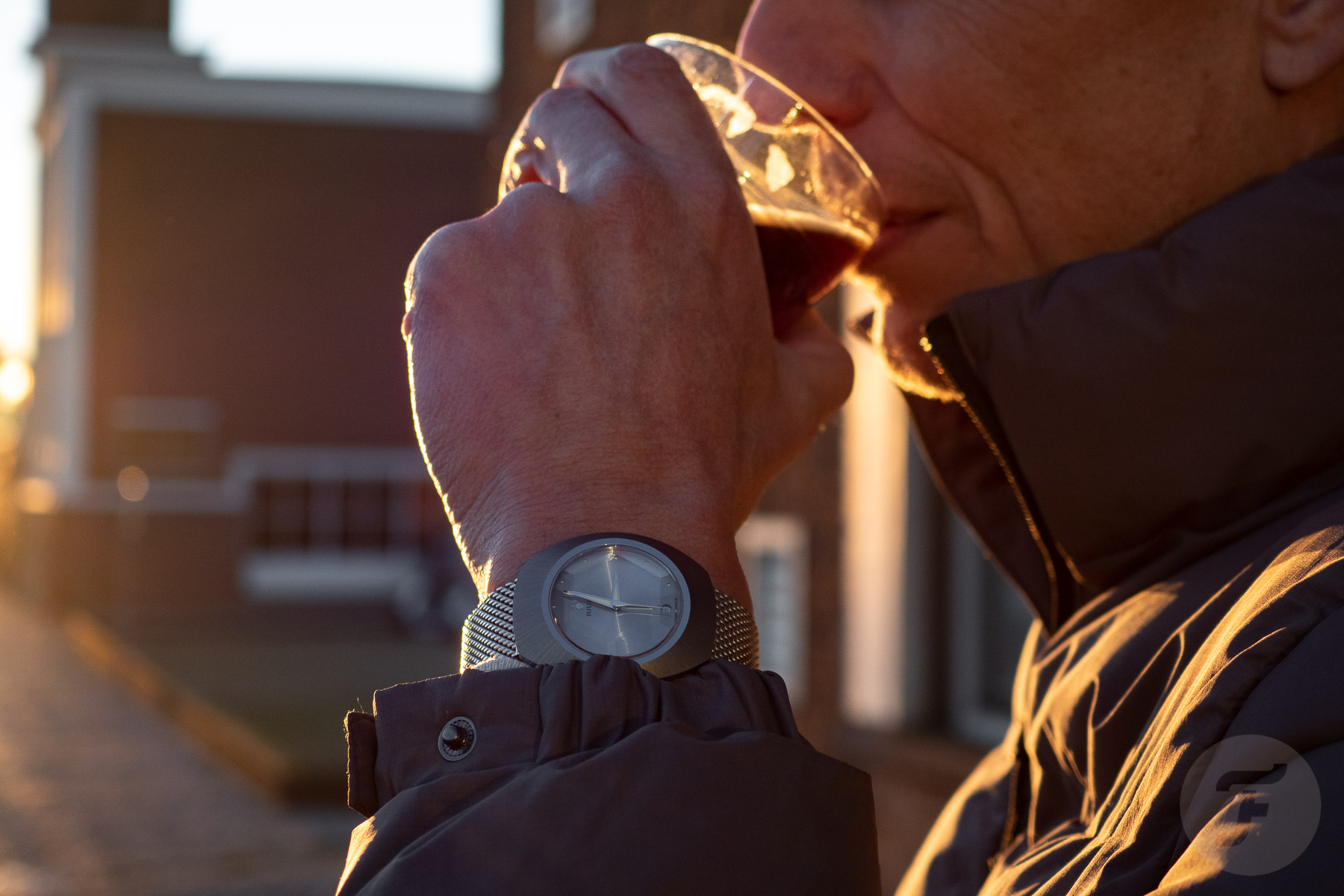 The Moser Genesis sure is a talking piece for the coffee corner. And so is the rockin’ Jaquet Droz because it brings the old “Beatles vs. Stones” discussion back to life. The Rado DiaStar was the subject of a heated debate at Fratello HQ, but compared to the other watches in this edition of Coffee Corner Watch Talk, the redesigned classic looks like a crowd-pleaser, wouldn’t you say? Anyway, there’s plenty to talk about, not just for Monday, but for the rest of this (hopefully enjoyable) week.