You might have a permanent headache realizing you didn’t pull the trigger on that Rolex GMT-Master or Submariner ten years ago. You know what the problem is with my dearest Longines 5699? That I was basically 25 years late to the party…

The last online listing for a Longines ref. 5699 that I bothered to inquire about was about three years ago. I remember it very precisely, as it were yesterday. I studied the Longines 5699 in more detail and instantly fell in love with it. Being slightly naive, I sent the seller an email asking the price for which he’d part with the watch. “The Longines you inquired about is a truly rare and special beast. The price is €95,000.“ I passed out. I don’t think I even managed to put a polite thank-you email together. Shame on me. Well, I could not afford it. And I am not sure I will ever be able to. 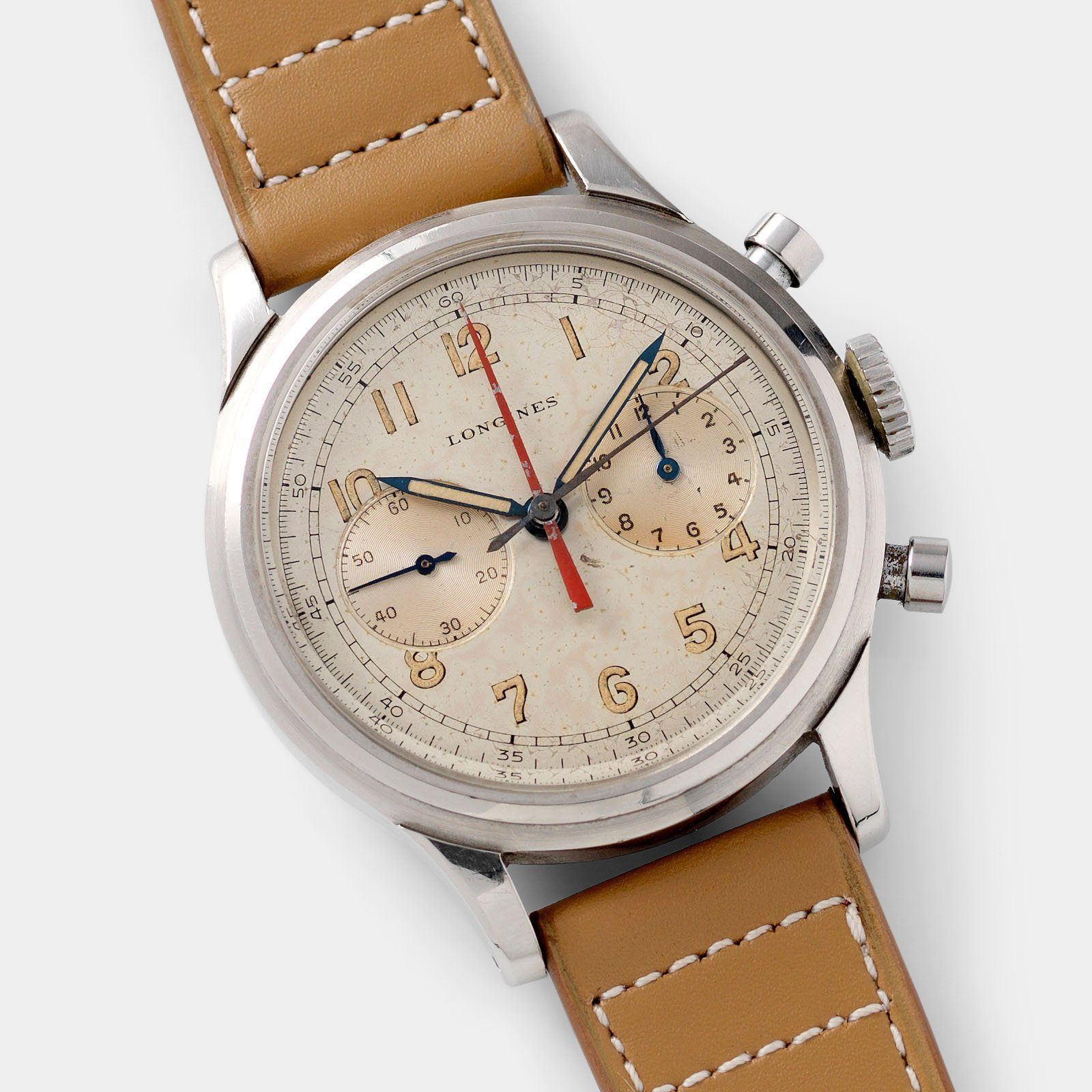 Do you know what one of the best things about watch collecting is for me? That there are still pieces I can’t acquire. And the Longines ref. 5699 is definitely one of them. If I could buy everything that my heart longed for tomorrow, I assume the game would be boring. It’s also about dreaming.

I remember a LEGO Technic kit that my best friend and I wanted when we were kids. Back then, it was our totem. Each day after we finished school, we went to check the shop window to see if it was still there. Just the idea of having it when we looked at it was fulfilling. And today, about 30 years later, I am looking at the Longines 5699 with the same feeling. I will most likely never get my hands on the original Longines 5699, but the idea of having one is nice. 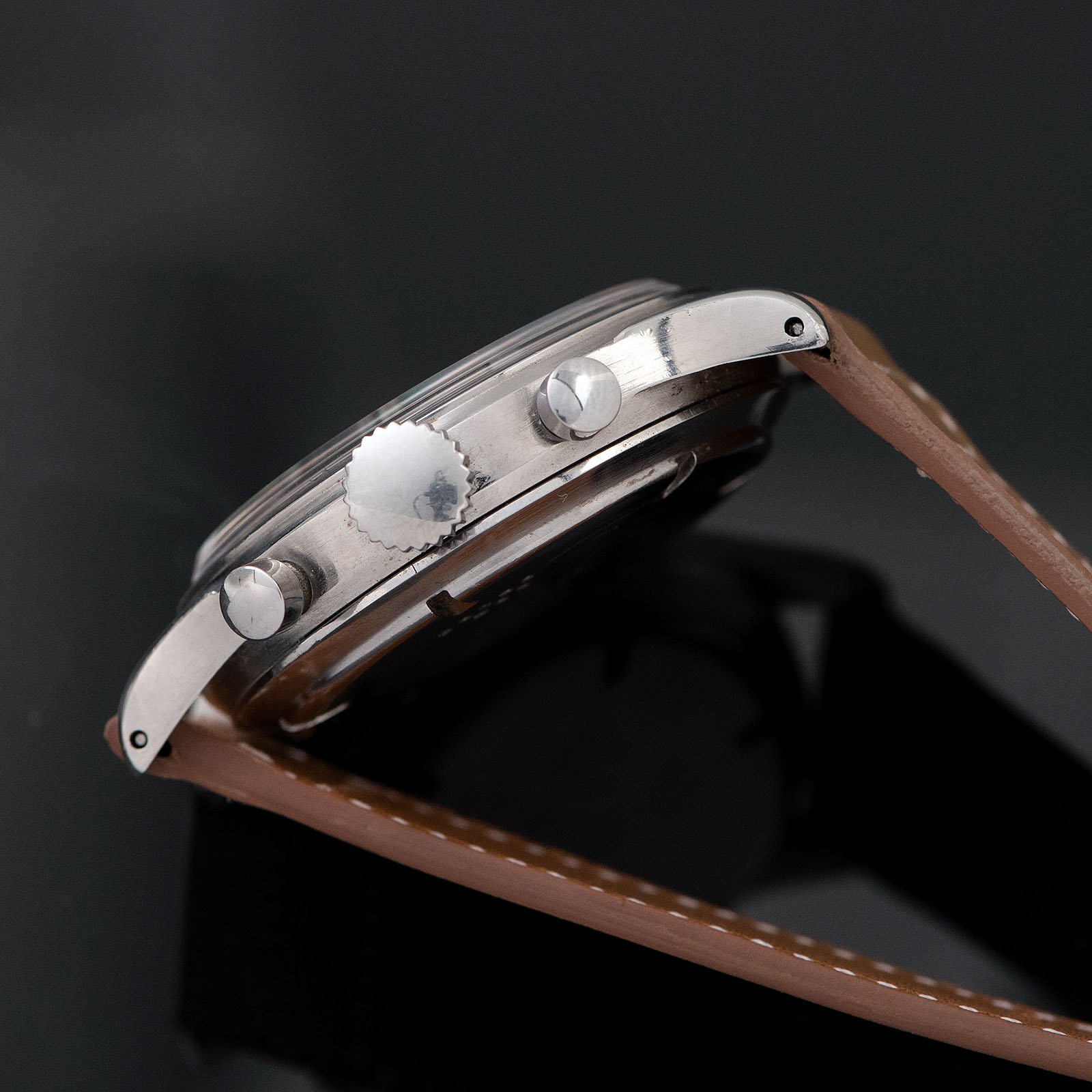 There aren’t many of them out there, and they seldom pop up for sale. When they do, it’s mostly at the world’s best auction houses, which is already a solid promise of a fat premium price tag. For us dreamers, there isn’t much to celebrate, but at least we get a bunch of high-quality photos, the kind you often find accompanying lots selling for €100,000.

One detail that is not so obvious from pictures but that is pretty astonishing is the diameter of the watch. While watches from the 1940s usually hop around 35mm in diameter, the Longines 5699 is a notable exception. The astonishing 39.5mm case is well beyond the standard and leaves a lot of space for dial artistry.

In 1936, Longines developed and patented what would become its most famous movement — the caliber 13ZN. “This chronograph movement was the most elaborate of its time,” says Phillips, which auctioned one example of a 5699 about 50 grand below value after COVID attacked Europe. The ref. 5699 with its unusual 12-hour counter is not merely one of the most sought-after Longines watches. It is also one of the finest vintage chronographs you may ever see.

The Longines 5699 is extraordinary on so many levels, and every time I look at it, I am left speechless. The most surprising thing about it is that this chronograph is capable of recording events up to 12 hours long, despite having just two sub-registers. What might look like a typical 30-minute or 45-minute counter on the right side is actually a 12-hour recorder. Similar to my beloved Mido Multi-Centerchrono, the Longines 5699 has two centrally mounted chronograph hands, which some might mistake for a split-seconds feature. In reality, the thin blue hand on top records seconds, and the striking triangular red hand records minutes. 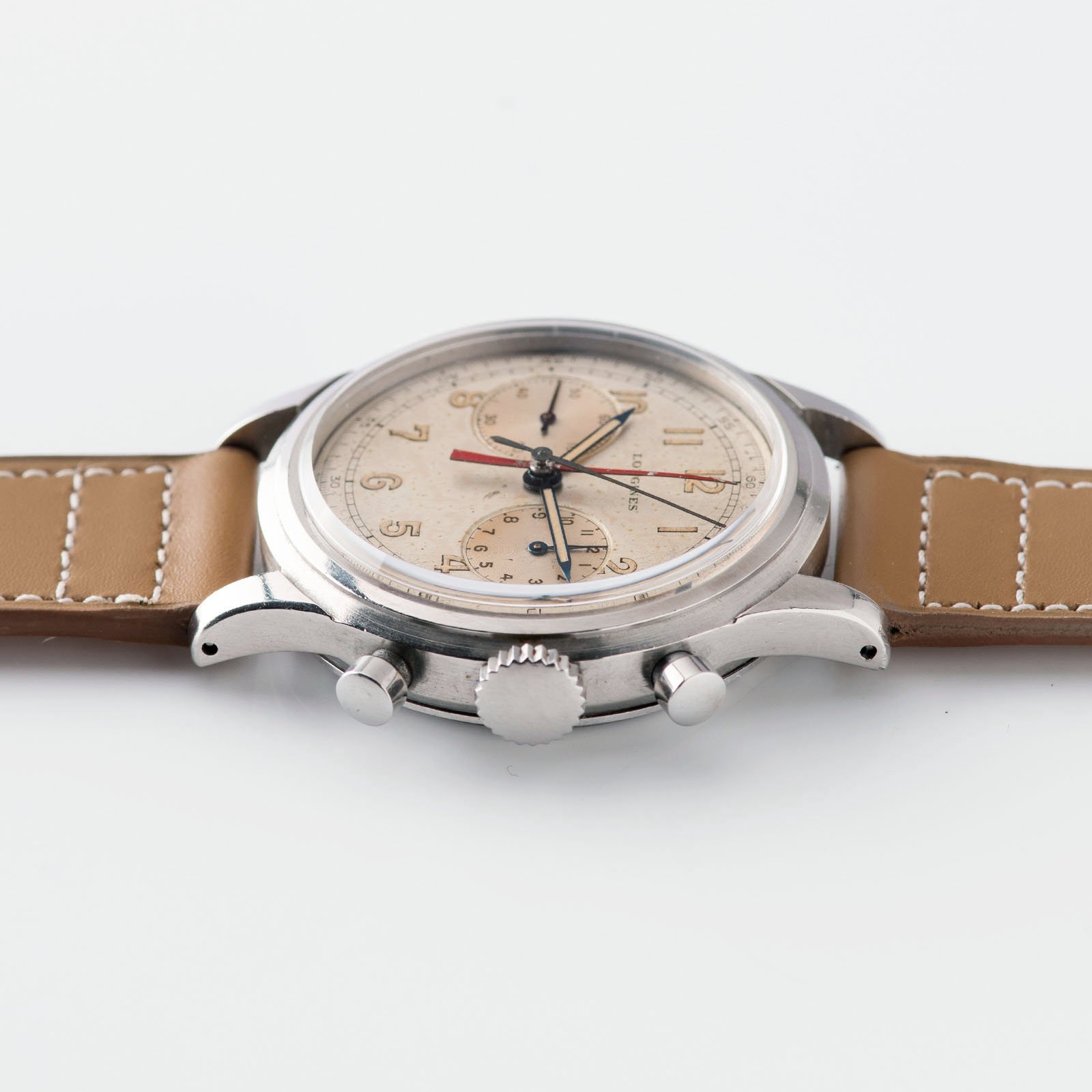 What I like in particular is the unusual incorporation of the minute and second tracks and how they play with the central hands. The blue hand for elapsed seconds is slightly longer. It sticks out a hair more so it displays the recorded time to 1/5th of a second on the outer track. The shorter red minute hand reaches just far enough to show recorded minutes on the railroad track.

The pencil hands gliding above the silver dial often age to beautiful sandy tones that perfectly match the lume on the big Arabic numerals. While Excelsior Park has its cult-classic coathanger seven, Longines strikes with strong sports-jersey-style numbers. Out of all of them, I think the “6” is my favorite. 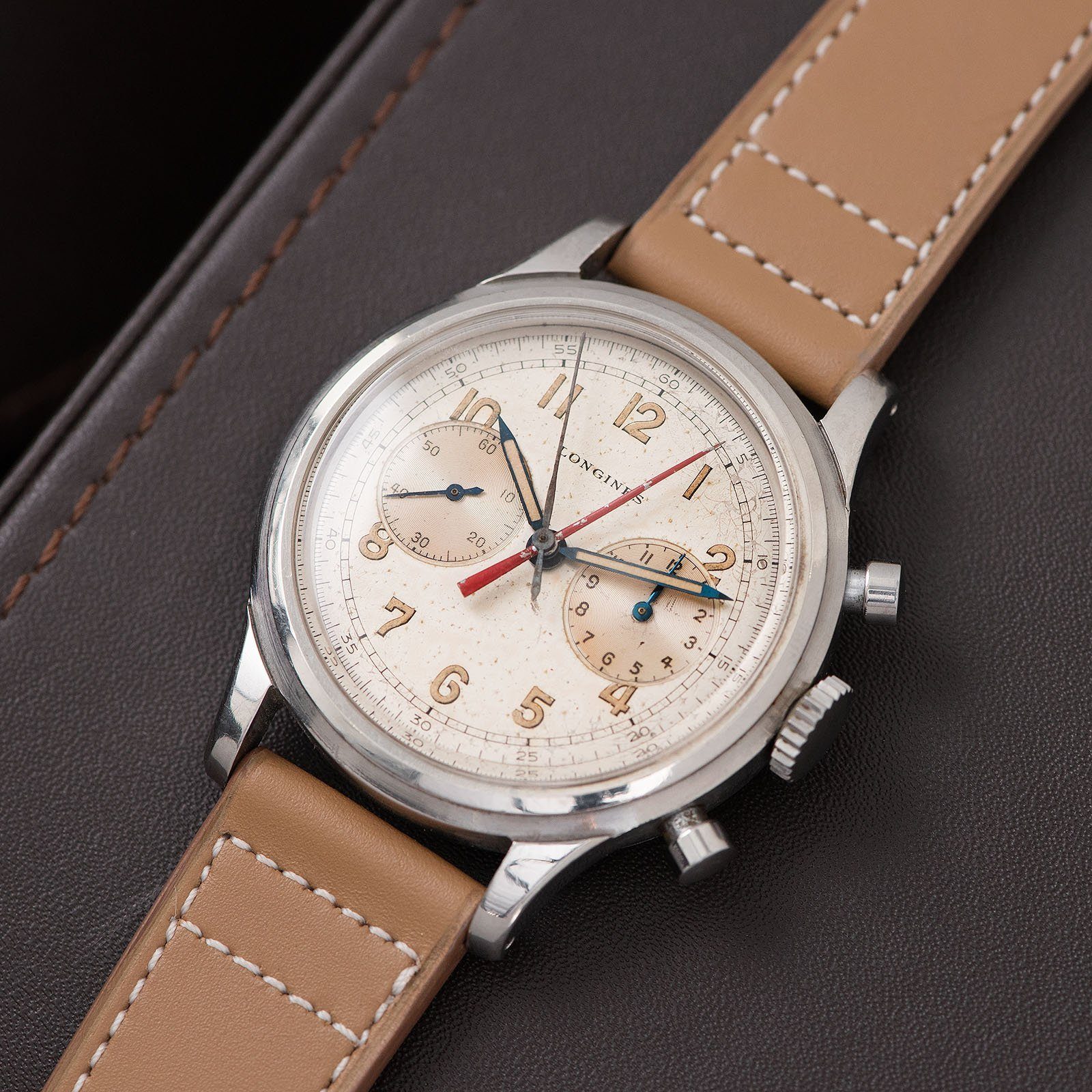 It’s almost unbelievable that this watch originates from the mid-’40s. I swear, if I didn’t know the 5699 and only saw an identical 1:1 re-edition, I would believe it was a freshly designed modern watch. That makes me think it has incredible potential today. It’s both sporty and elegant, and it’s perfectly sized. And what’s pretty important for me is that it’s different than most 12-hour chronographs out there. If I ever start selling pieces from my collection, you will know what for…

Do you think the Longines 5699 deserves a re-issue? If so, let us know in the comments below.