Finally. Yes, finally, I can write about the time that Nacho and I were locked in a tiny, scorching-hot room with no windows. It all happened months ago in Geneva during an event called Watches and Wonders. What happened is that we were shown the phenomenal Ferdinand Berthoud Chronomètre FB3 SPC, but we were not allowed to write about it or show the fabulous pics that Nacho took of the different executions of the new watch. But now, my Fratelli, the cat is out of the bag.

One of the highlights of Watch and Wonders 2022 that took place earlier this past spring was, without a shadow of a doubt, the new Ferdinand Berthoud Chronomètre FB3 SPC. Yes, the fact that the watch was cloaked in secrecy and we had to swear on the lives of our favorite teddy bears also affected our perception of the piece. But through Nacho’s lens and my naked eyes, the different versions of the watch looked nothing short of spectacular. Not spectacular in the way of previous Ferdinand Berthoud creations like the skeletonized FB-T.FC-RS in carburized stainless steel, but rather, in a more soft-spoken way. Everything about this watch, from the size and design to the technique and the prize, is beyond spectacular. The Chronomètre FB3 SPC is the most laid-back, introverted, and affordable Ferdinand Berthoud offering yet. 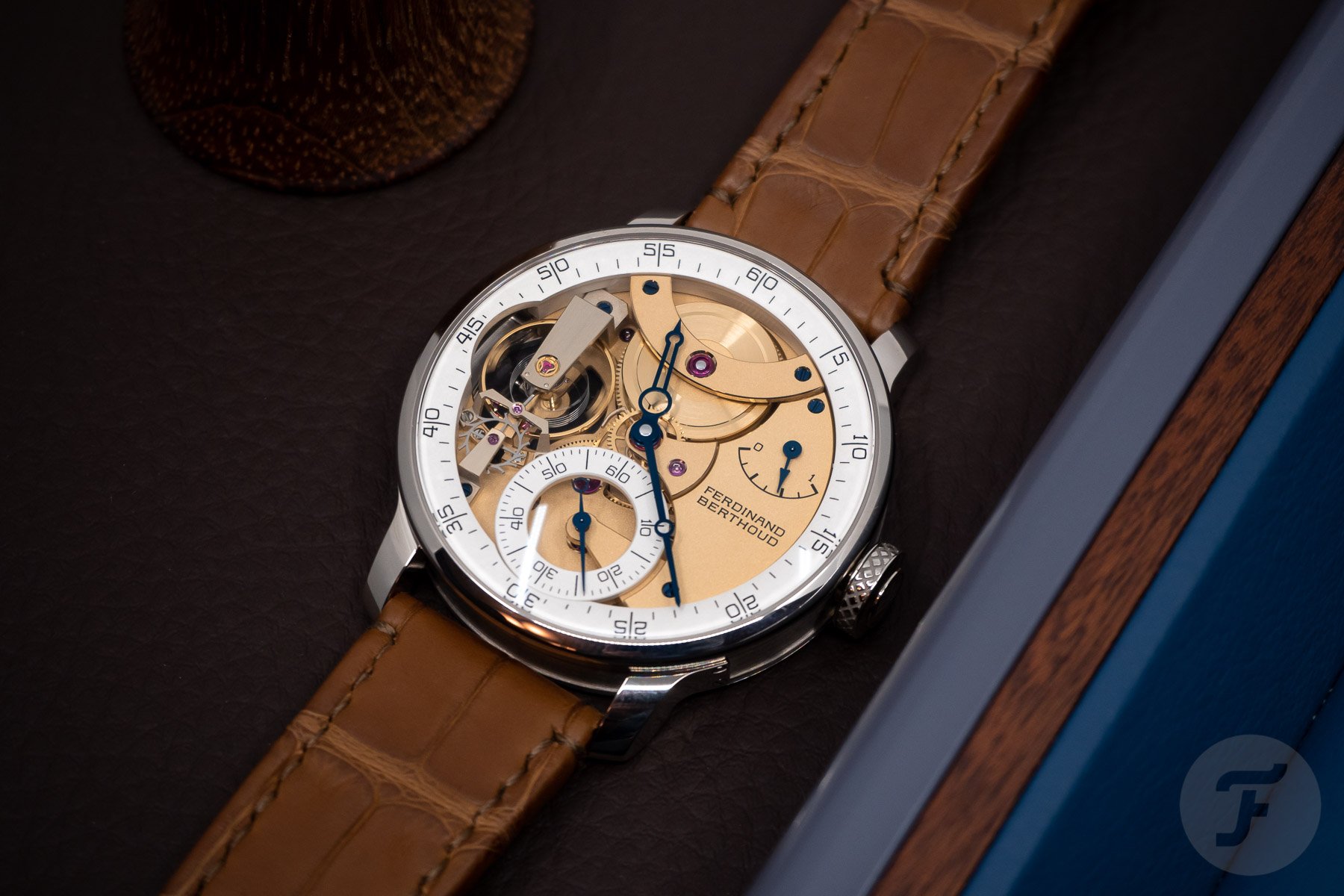 For those who want to know, the brand Ferdinand Berthoud is named after an 18th-century watchmaker and was revived by Karl-Friedrich Scheuffele of Chopard in 2015. The watches that have come out since then have all been distinct, complicated, and successful in terms of awards. The FB1 was the best-in-show of the 2015 GPHG, for instance. The third Ferdinand Berthoud creation, aptly named FB3, is a completely new concept. It’s simpler, smaller, and more “affordable” — the FB-T.FC-RS carries a price tag of €251,000, while the new FB3 watches stay below the €150K mark. Watches and Wonders 2022 was the scene where Nacho and I got the chance to try out, feel, inspect, and photograph the Chronomètre FB3 SPC that comes in either an ethically sourced 18K white or pink gold case with gilded or black rhodium-plated visible movement components. The price of all versions is CHF 140,000. 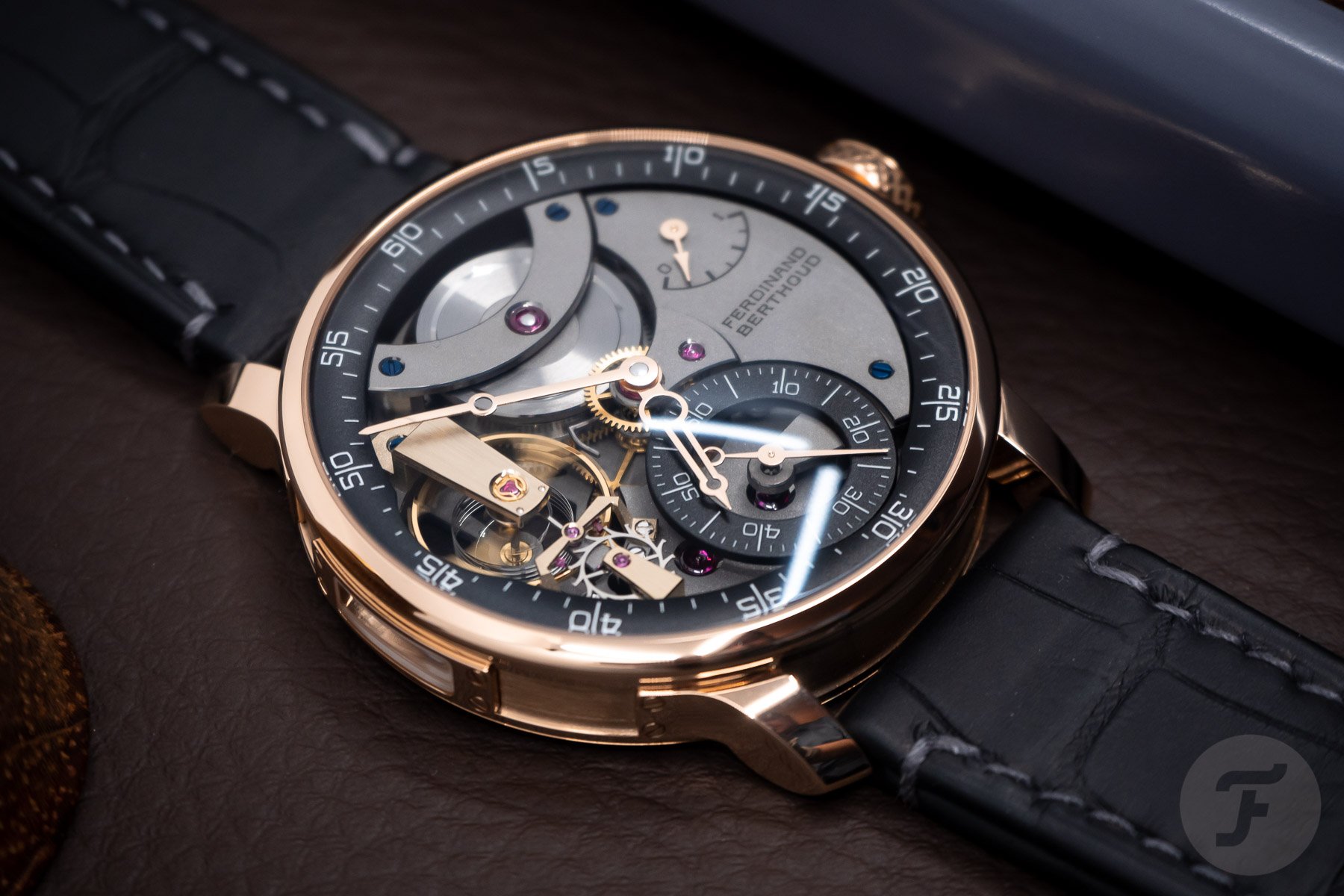 The third modern Ferdinand Berthoud watch measures 42.3 × 9.43mm, and those numbers suggest a watch that wears well on an 18.5cm (7.3″) wrist. And the numbers don’t lie. The round and luxuriously weighty white or pink gold case sits well and feels great on the wrist. Furthermore, the feeling that it brings to the heart of a watch enthusiast is wonderful. It’s not a difficult watch in the sense that you have to put your brain to work to connect all the horological details, as you have to with some Greubel Forsey models, for example.

Rather, the FB3 is pretty straightforward. It has a clear layout that shows the time instantly, and it will only reveal its technical magic tricks upon close observation. And the layered design of the dial — which is actually six bridges that form the baseplate of the movement — with an extra opening at 9 o’clock on the side of the case, allows just that while the FB3 is on the wrist. The ring on the outside of the dial keeps everything together, so to speak. And inside that perimeter, you will find the small seconds at 6 o’clock and the gold or blued hands in their very distinct shapes. 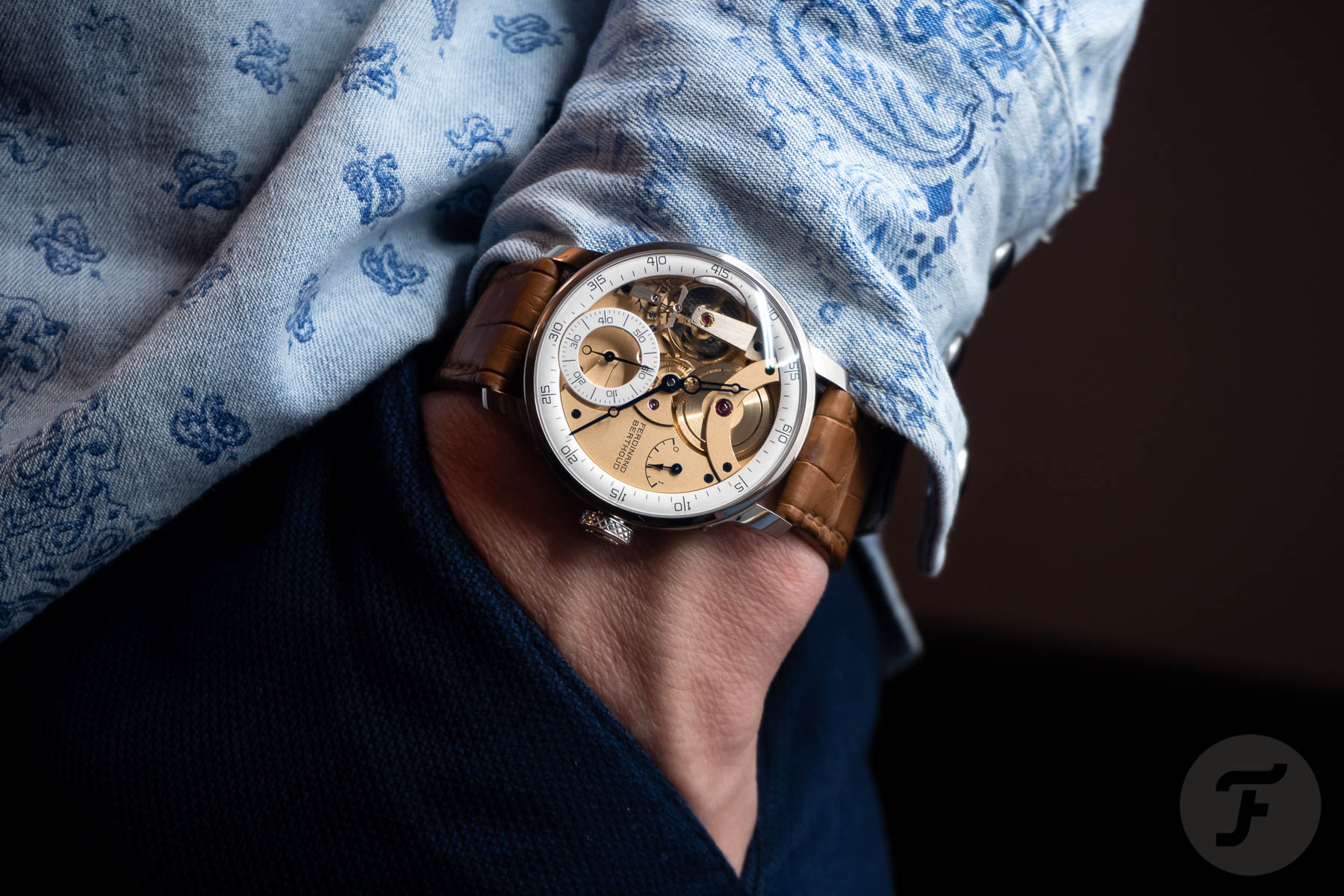 Look at it from the front, the back, and the side

The sandblasted and gilded or black, rhodium-treated components of caliber FB-SPC are a feast for the eye. And the knowledge that all this splendid craftsmanship is not just beautiful but also functional is something that is part of the attraction of a Ferdinand Berthoud creation. The historic watchmaker’s fame in the field of chronometers gets a contemporary twist with ISO 3159/COSC-certified FB3. To meet the standard, FB didn’t use a tourbillon or a constant-force mechanism — please keep in mind that we’re dealing with an entry-level FB here. Instead, the precision stems from other horological trickery like a cylindrical hairspring visible at 9 o’clock from the front, the back, and the side. The historical connection of the three-dimensional, concentric balance spring is that Louis Berthoud — Ferdinand’s nephew — put one such spring in a late-18th-century pocket watch. 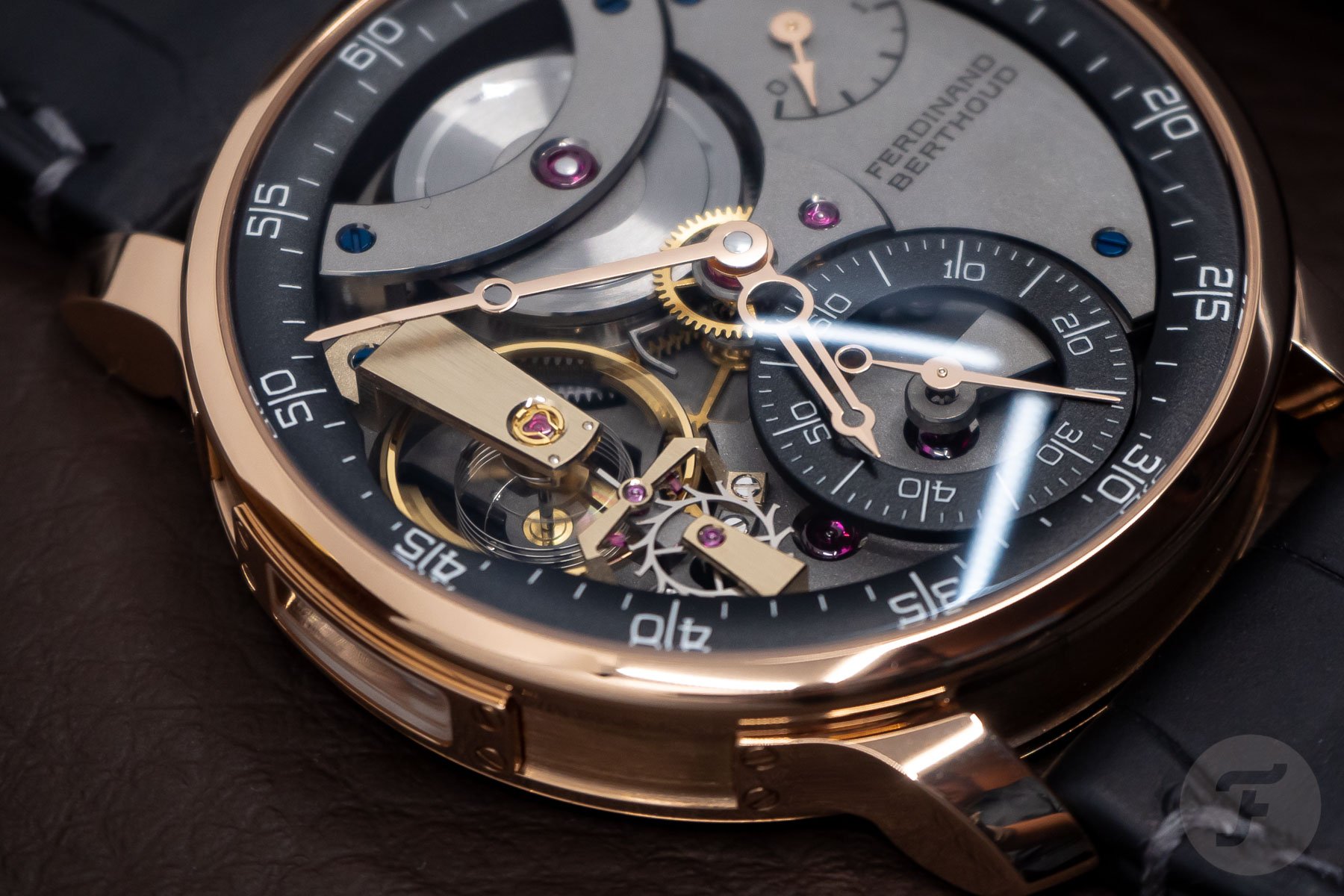 Kudos to Ferdinand Berthoud for fabricating the cylindrical hairspring entirely in-house. That is not an easy thing to do and something that required quite a bit of R&D. It took the FB watchmakers two years to create a hairspring of this shape that could meet COSC standards. And it was only possible because of hard manual labor. Each cylindrical hairspring is curved by hand, and that’s difficult and delicate work. It’s time-consuming too. Because of the hand-bent hairspring, only 25 FB3 watches will be produced every year; it’s a physical limitation. Since we’re on the topic of cylindrical, spherical, or helical hairsprings, these types of springs are quite rare. They are also hypnotizing to watch, by the way, because of the three-dimensional movement that mimics a pulsating heart much more than a standard flat hairspring does. 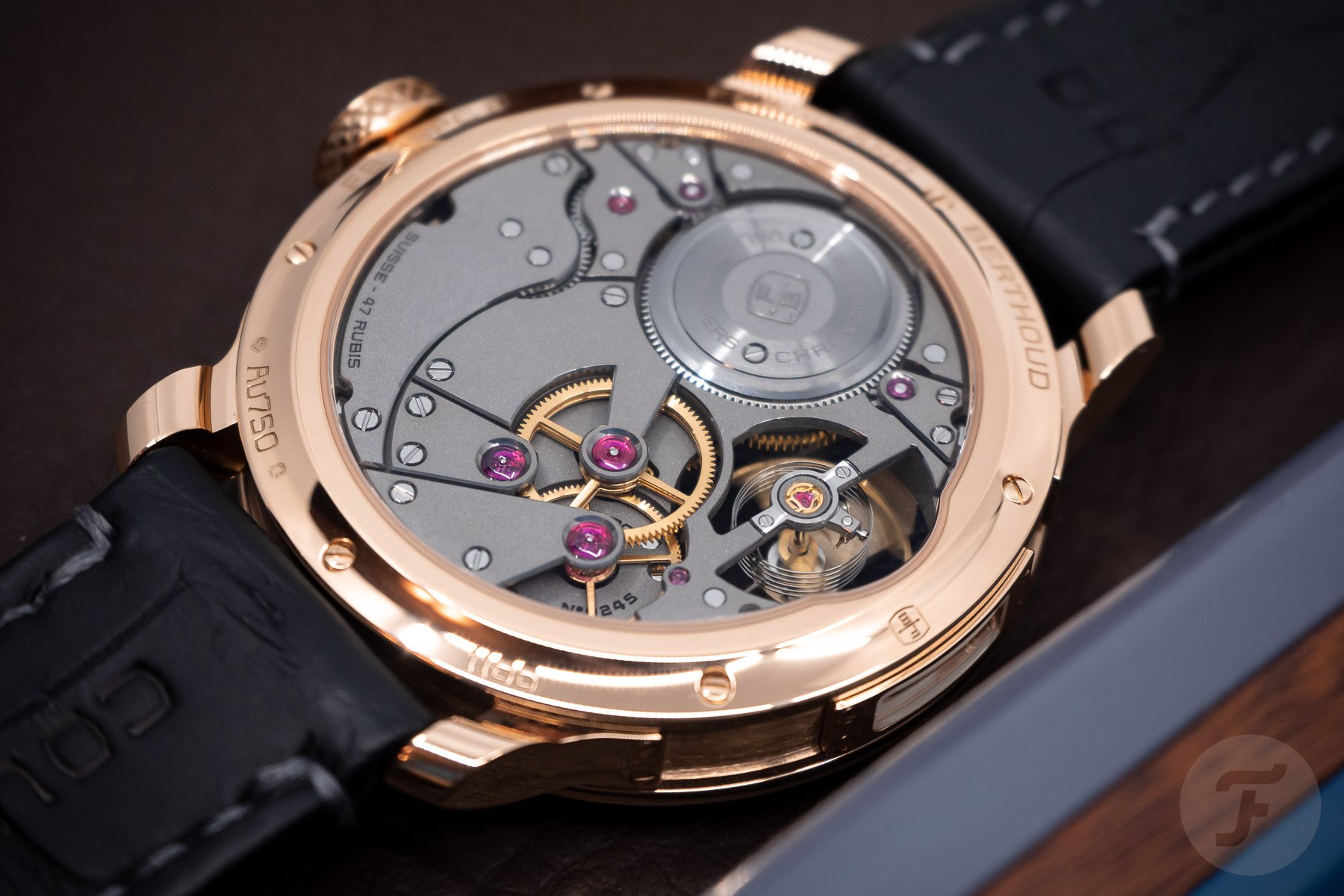 I remember seeing a Jaeger-LeCoultre with such a pulsating spring during SIHH a few years back, but there are also watches from Vacheron Constantin and, recently, a tourbillon with such a hairspring from H. Moser & Cie. 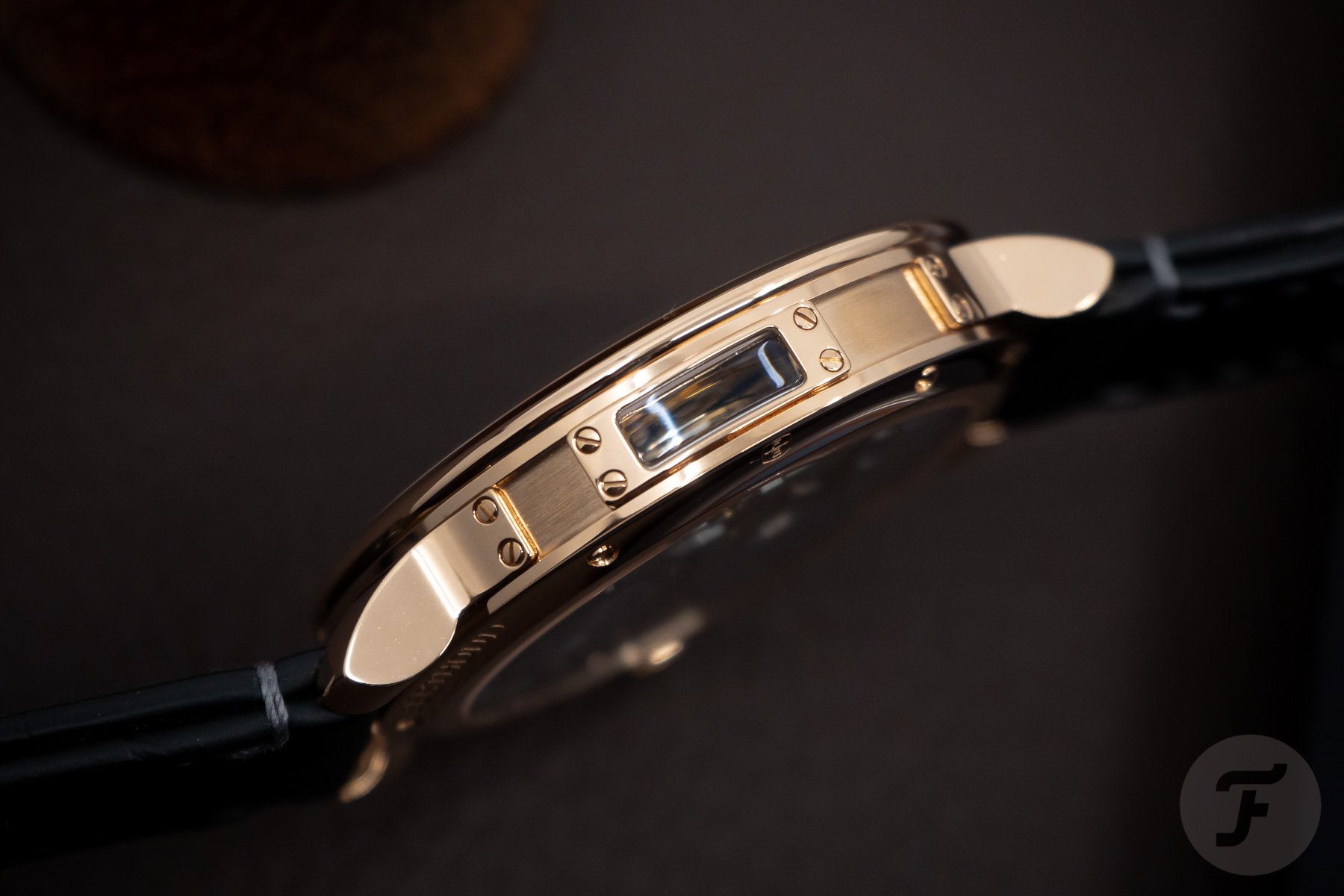 A micromechanical ballet of 230 “dancers”

You really get the sense that you’re wearing a steampunk version of an 18th-century marine chronometer on the wrist. It’s not so exaggerated as to feel gimmicky, but it’s not so subdued as to be bland. The FB3, in all its four iterations, is a watch with a strong personality. The 3Hz caliber, which has 72 hours of power reserve, is a never-ending source of horological joy. The constant movement of the different interacting parts of the escapement is a micromechanical ballet. And there are 229 “dancers” in the FB3’s corps de ballet, while the hairspring is the prima donna, making a total of 230. Bringing them together into the right shape and with the proper look takes the brand’s artisans more than 100 hours.

As you would expect with a high-end creation like the FB3, the bevels of the bridges are chamfered and polished — by hand, of course. After this decorative step, the parts get a galvanic coating. And to get to the final look, the bridges and flat surfaces get sandblasted. Again, not in a machine, but by hand. 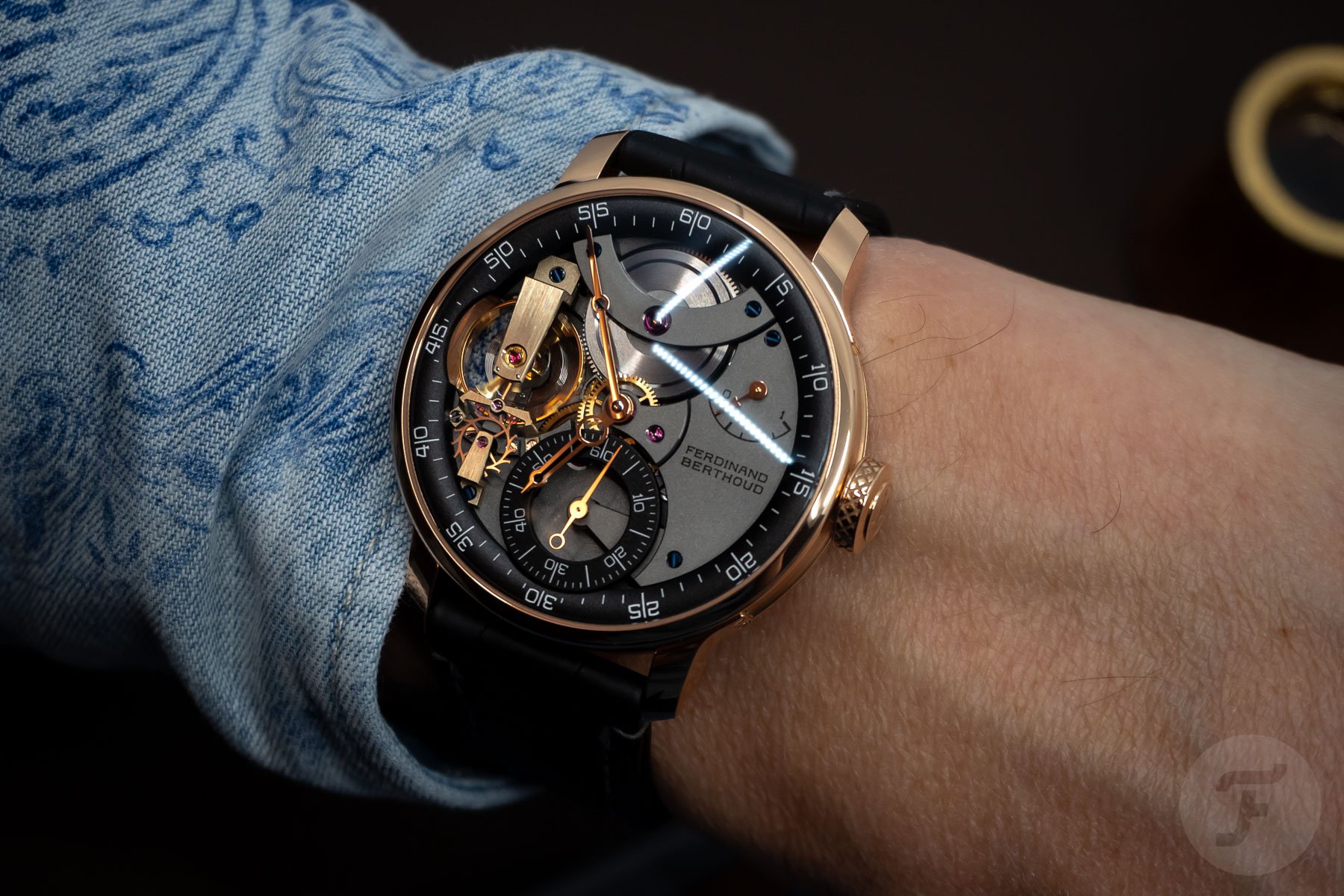 What impressed me most is that the watch is so incredibly wearable. Many nouvelle horlogerie creations are quite the wristful. Wearing an objet d’art that tells time takes effort and, in some cases, confidence. The Chronomètre FB3 is quite the opposite. Yes, the movement and the design of the watch show notable elements that hark back to historical Ferdinand Berthoud creations. The striking skeletonized hands, for example, are based on those in a 1785 Ferdinand Berthoud astronomical regulator clock that now has a place in the Fleurier manufacture. However, these elements don’t get in the way of experiencing and enjoying the FB3 as a proper timepiece. The FB3 is, first and foremost, a contemporary watch. 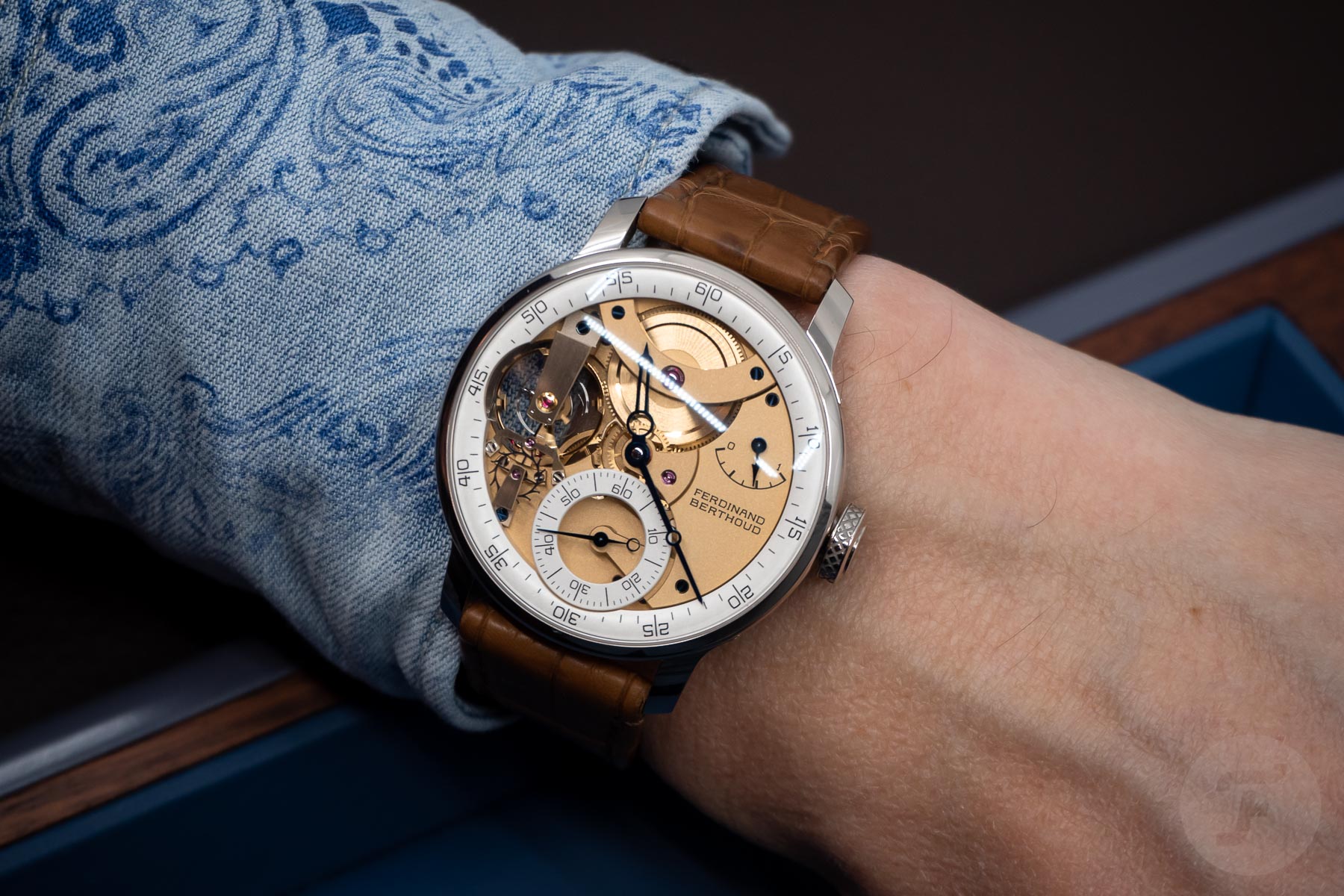 Second, it is a superb piece of micromechanical engineering. And third, it is a horological festival if you experience it through a magnifying glass. The detailing and finishing are of the highest level, and watching the cylindrical hairspring pulsating up close is what high horology is all about. It could, however, cause excessive horological excitement. If that happens, the FB watchmakers have come up with a way to calm things down. If you pull out the crown, the cylindrical hairspring stops moving. Once you have caught your breath and your heart has stopped racing, you can push the oversized crown back in, and the movement will resume its chronometer-accurate pace. If you think you can handle and afford the excitement, now it’s time to pick your favorite version.

Find out more about the Ferdinand Berthoud Chronomètre FB3 SPC watches on the brand’s official website.