Ever since the Apple Watch has been introduced, everybody is debating whether it will change the traditional watch world. Some say this is the greatest revolution in the watch industry since a long time, others say it is a wave that will die out as quickly as it emerged. The only point we can agree with is that the health monitoring function can indeed bring a bit of a change to a person’s life. Personally, I don’t find the Apple Watch very attractive and am not convinced about its battery life ether. There is one alternative to the smartwatches I’ve seen so far from Apple, Samsung etc. that I absolutely love and think will be a game changer for good; the Frederique Constant’s Horological Smartwatch. 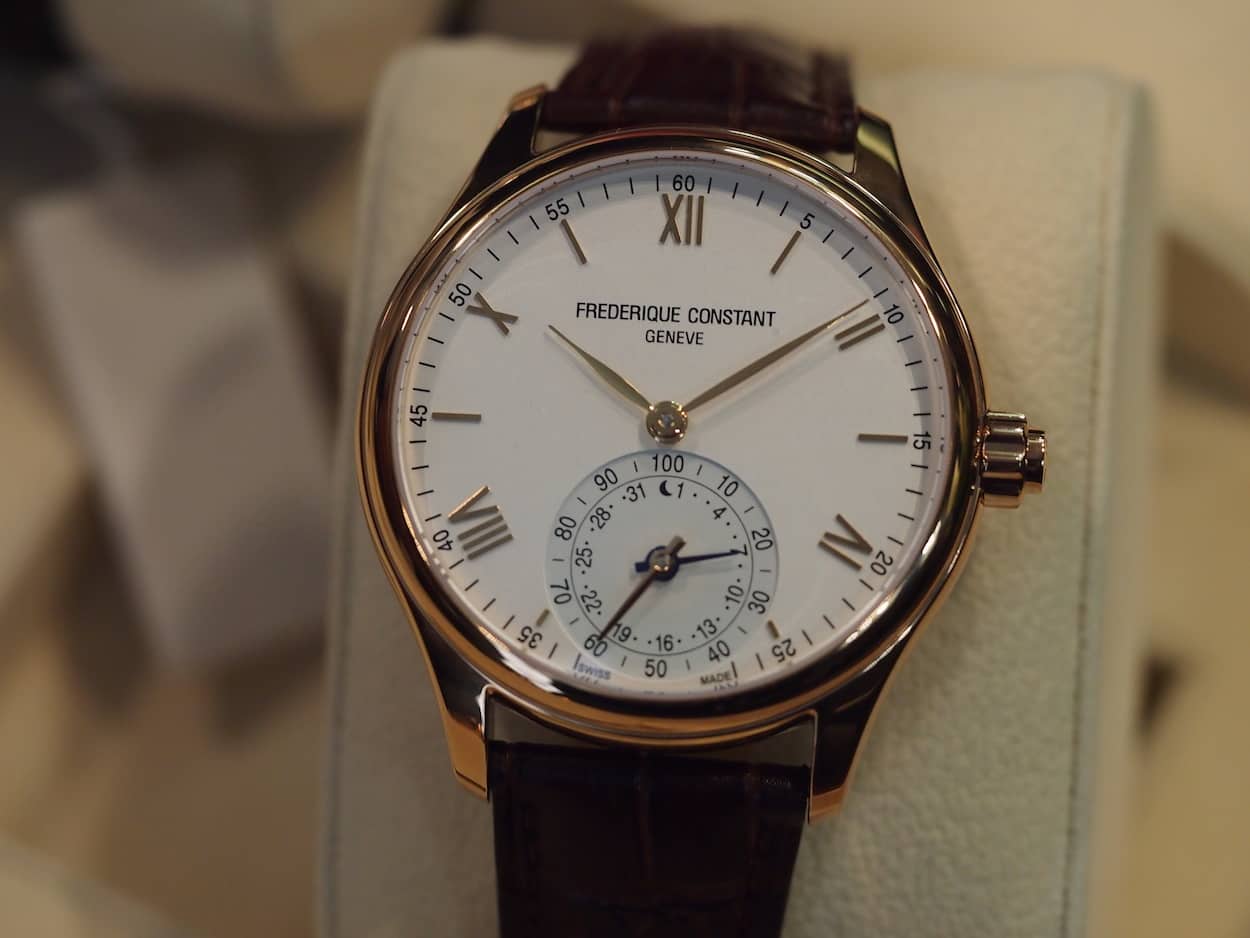 I’ve had the pleasure of examining the Frederique Constant Horological Smartwatch at BaselWorld and have to say that I am impressed by its design and the modern technology behind it. The watch, as all smartwatches on the market today, is “connected”. This means that information is being gathered by the smartwatch and then transmitted to another device (either Android or iOS based) using Bluetooth. The Apple Watch, contrary to popular belief, is no exception by the way. The Frederique Constant Horological Smartwatch features the same MotionX technology you will find in most sports bracelets by Nike,  Jawbone and so on. Basically, the Horological Smartwatch gives you the same features as the products by the above brands. It has features like: activity tracking, sleep monitoring, adaptive coaching, active alerts etc. The big difference is of course the execution of this smartwatch. Luckily, there are no digital displays; the functions are visible via the app on your smartphone or tablet.

An example: put the Horological Smartwatch under your pillow when you go to bed and it will monitor your sleep. It gathers information about you while your body rests; like the time you spent in deep sleep and so on. The Frederique Constant Horological Smartwatch is able to record data around the clock about your physical behaviour. This way, you will have data about yourself that can help you to analyse your physical condition.

Besides having the data at hand on your smartphone or tablet, the Horological Smartwatch’ sub dial at 6 o’clock also presents some information. By pushing the button on the crown, you will activate the Horological Smartwatch. The silver hand will present the activity level in percentages (approx 60% on the image below). In normal mode, the smaller blued hand indicates the date. However, when the ‘sleep’ function is activated it will point towards the little Moon on the sub dial. 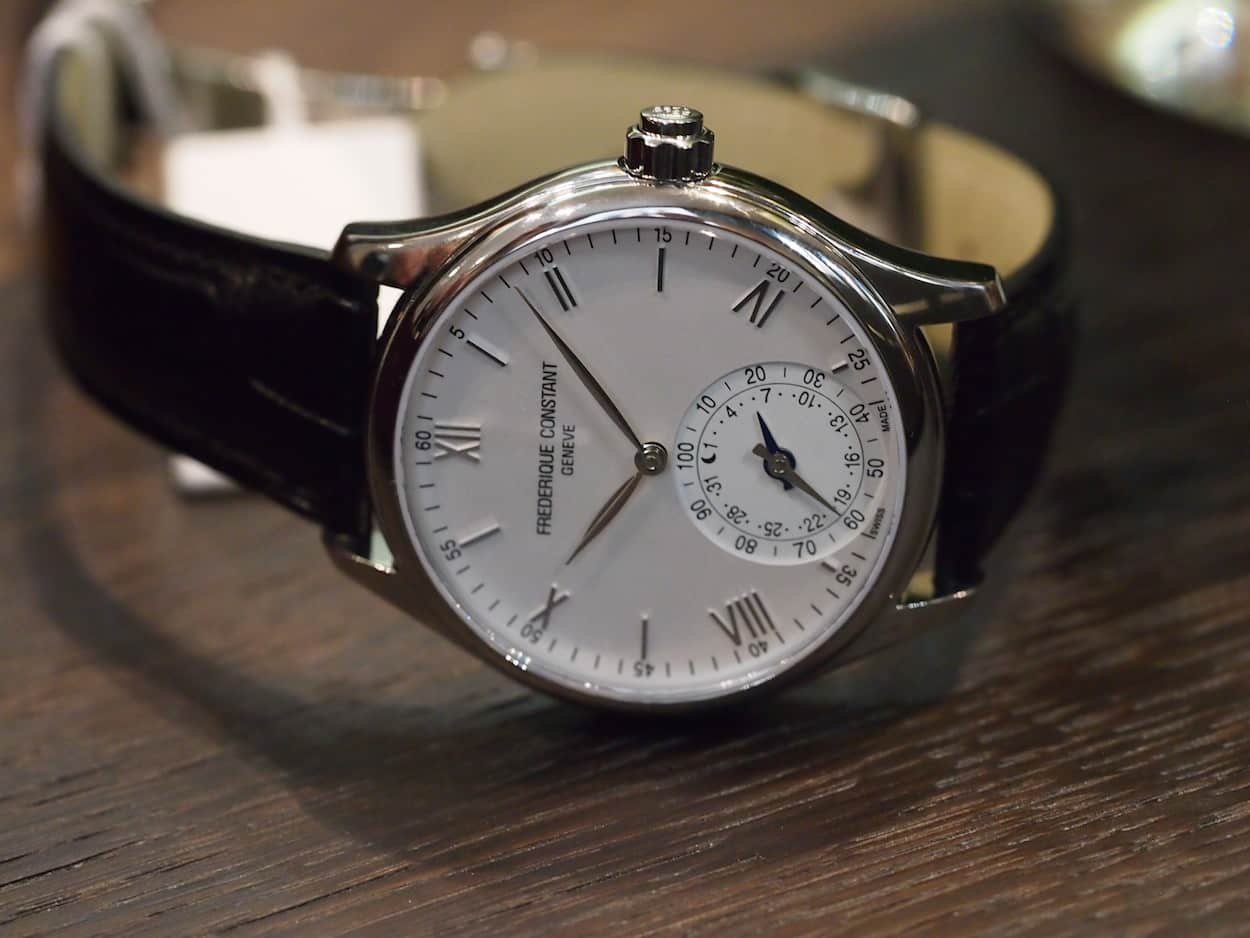 How is the watch built up?

The watch is basically built up in 3 layers. The dial is considered to be the first layer. Under the dial, you have the quartz movement (2nd layer). At the bottom, below the movement is the MotionX technology module (3rd layer). This module is equipped with sensors that collects the information from you. Your blood pressure, the number of steps you took and so on. This data is then being transferred to your smartphone or tablet where it will be processed by the special developed Frederique Constant Horological Smartwatch app. The data is displayed in a very easy-to-interpret diagrams.

This Swiss smartwatch has a battery life of +2 years which is a huge difference from other (or should I say “traditional”) smartwatches on the market today. The Frederique Constant Horological Smartwatch has a beautiful, elegant case design with a silver dial featuring applied Roman indexes. The case has a comfortable 42mm diameter with convex sapphire crystal on top and a water resistance up to 5ATM.

How many of these Horological Smartwatches will be released?

Frederique Constant is not the only brand releasing a smartwatch with the described technology. Even though the Frederique Constant Horological Smartwatch is the most classical one with its dressy an clean design the company’s sister brand Alpina will also introduce some sporty models with the same technology. The timepieces will be produced for both men and women and we were told that during this year ,Frederique Constant and Alpina would present more than 10 different models. We were also promised to receive a few models for review later on this year.  We can’t wait to give you a more in-depth review of these Swiss smartwatches. The Frederique Constant Horological Smartwatch and its Alpina cousins will be launched in June 2015 with price tag between €1000 and €1500 Euro (~ $1100 USD and $1650 USD).

More information can be found on this special smartwatch microsite of Frederique Constant.

Hot Topics
When Sneaker Heads And Time Geeks Team Up — The 11 Most Iconic Sneakers And The Watches That Go With Them
62 comments
A Californian Controversy: The Origins Of The Term “California Dial” And Why It Can Mean Two Very Different Things…
52 comments
What Zenith Is Doing Wrong With Its Pilot Line And How The Brand Could Fix It
35 comments
The Best Omega Watches Of Daniel Craig’s James Bond Era — Have Your Say!
28 comments
How Watches Work: What Is The Difference Between 316L And 904L Stainless Steel? And Why Does Rolex Use 904L Steel?
27 comments
Popular
#TBT Seiko H558 Arnie – One Serious Diver
Michael Stockton
17
Speedy Tuesday – Olympic Games 2020 Speedmaster For the Japan Market
Robert-Jan Broer
3
Watches Of The King – Elvis Presley’s Notable Timepieces
Balazs Ferenczi
4