Following the earlier announcement that Girard-Perregaux were partnering with Aston Martin, we reveal the first watch to cement the partnership
Ben Hodges
comments 3
Share

I gave a rundown of all the watch brand and Formula One team partnerships for the 2021 season following the Imola Grand Prix in April. When it came to Girard-Perregaux and Aston Martin, I came up short. These two iconic marques only began the collaboration this season. So with the ink still dry, we were still eagerly anticipating the new Girard-Perregaux watches to celebrate the co-branding. Until now: Introducing the Girard-Perregaux Tourbillon with Three Flying Bridges — Aston Martin Edition. But is this the best watch to perpetuate to the cachet of Aston Martin? Let’s find out. 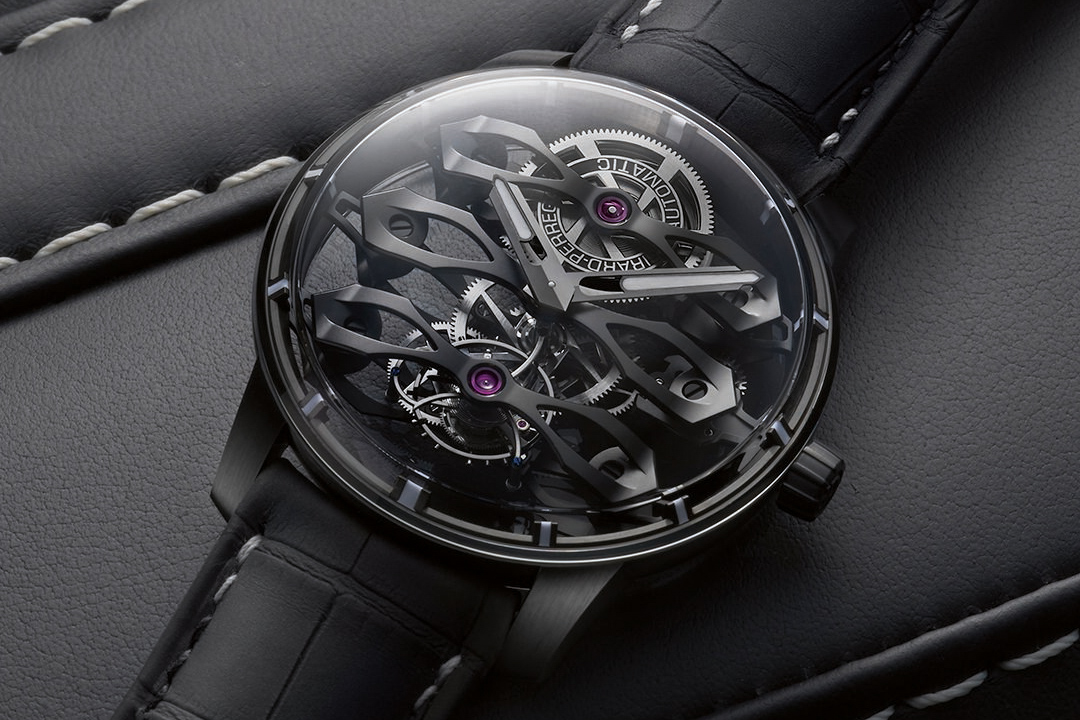 The blending of performance cars and Haute Horlogerie is nothing new. It’s something we’ve covered many times and even speculated on fantasy deals. But when it comes to Aston Martin, I always picture a sporty timepiece — more Omega Seamaster Diver 300M than Jacob & Co Astronomia. That’s why with the announcement that Girard-Perregaux was striking a deal with Aston Martin, my mind immediately conjured the sporty Laureato. Alas, this is not the watch Girard-Perregaux stacked up against the quintessential British car brand.

Girard-Perregaux gives us the new Three Bridges to mark the first watch with Aston Martin.

The Tourbillon with Three Flying Bridges is the skeletonized version of the Three Bridges with the Tourbillon at 6 o’clock. This model has no main plate as the bridges replace the main plate. It’s a contemporary finish with a black PVD treatment on the titanium bridges despite the traditional aesthetic. And despite the name, there are six bridges — three in the front and three in the back. To showcase the unique configuration is the box sapphire crystal on either side of the 44mm Grade 5 titanium case with DLC coating and satin finish. 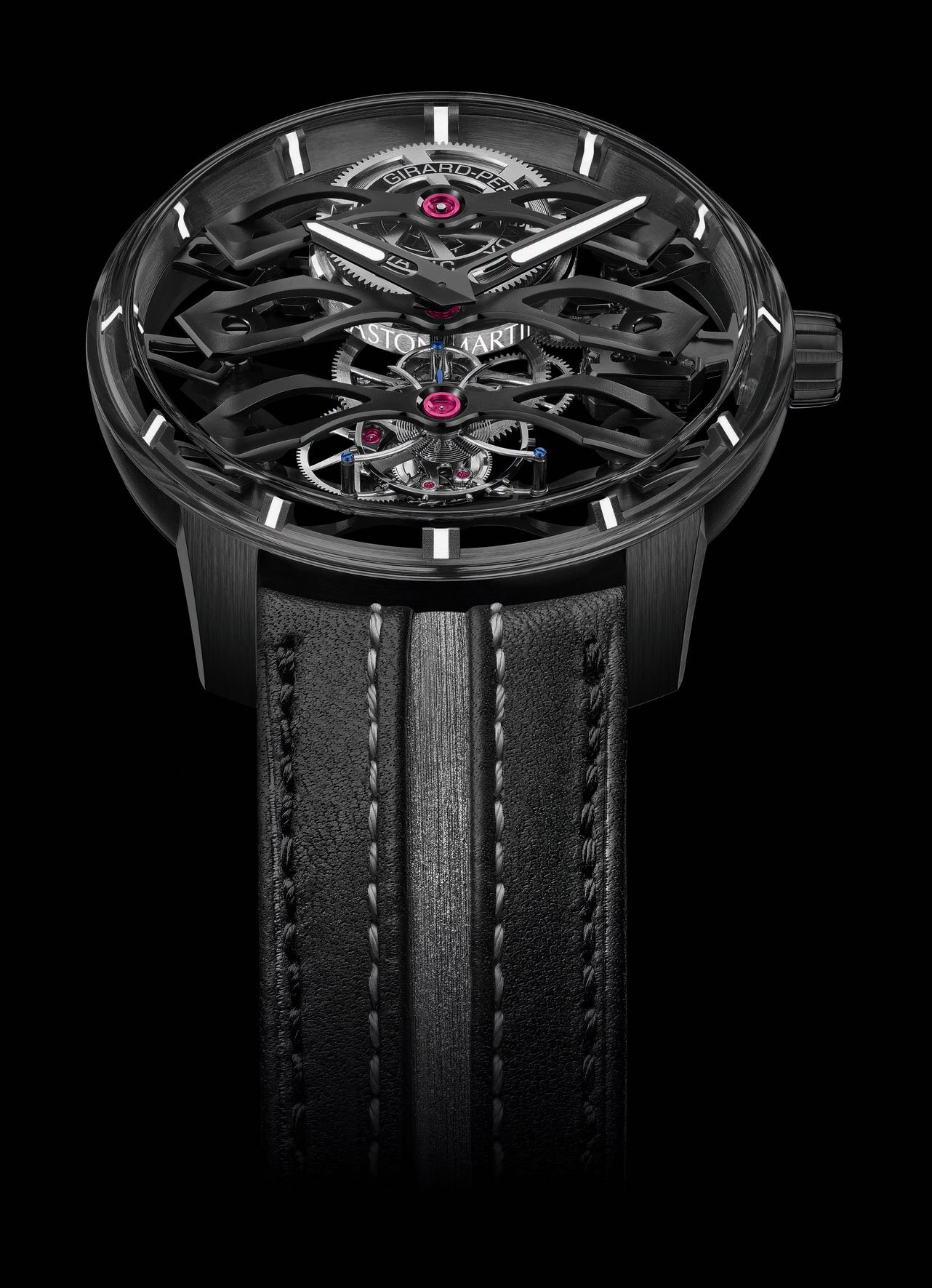 At the 12 o’clock position, and with the watch tilted at an acute angle, you can witness the first glimpse of the Aston Martin co-branding. Flowing around the periphery of the barrel is the white gold micro-rotor with the Aston Martin logo scribed in blue luminescent material. This exposed mechanism provides excellent views of the intricate construction, such as the circular gaining on the skeletonized barrel, the gold indices with black treatment, and the curvy namesake bridges that form that emblematic silhouette.

Aston Martin stands for values beyond the automotive industry. It’s not about just getting from A to B, but how evocative that journey can be. As such, GP selected its Three Bridges model as the poster child to mark the collaboration with Aston Martin. The Three Bridges line of watches began life in pocket watches and has persisted for 150-years in Girard-Perregaux’s 230-year history. The Laureato only stretches back to the ’70s, yet I still could not shake the potential of a Laureato × Aston Martin watch. Therefore, I posed the question to Girard-Perregaux’s CEO Patrick Pruniaux about the choice of Three Bridges over the Laureato:

The Laureato is considered the hero watch of Girard-Perregaux, whereas the Three Bridges is regarded as the icon watch at GP. The provenance of the wristwatch should match the rarity of seeing an Aston Martin on the streets. — Patrick Pruniaux 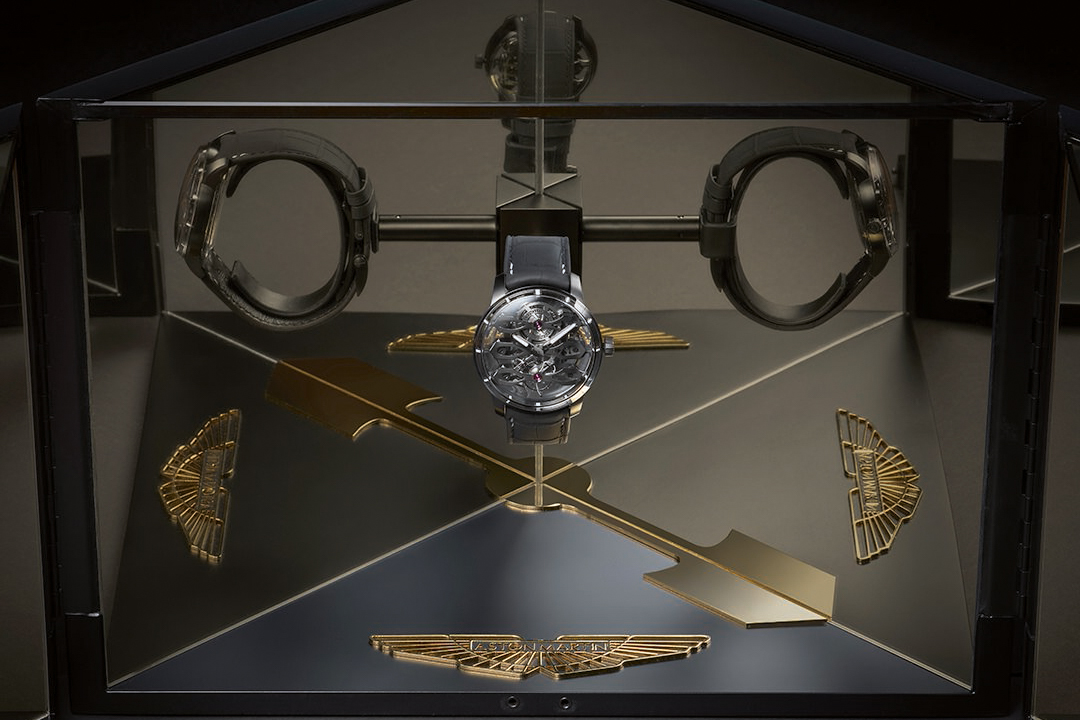 It was interesting to hear Pruniaux’s reasoning for selecting the Tourbillon with Three Flying Bridges. However, Aston Martin sports cars do seem a dime-a-dozen if you visit areas such as Chelsea and Knightsbridge in London. One of the strap options is also a breakthrough for Girard-Perregaux. The strap comprises an alloy mixing calf leather with a white gold injected rubber “go-faster” stripe running down the center of the strap. The Three Bridges is available for the (very exclusive) price of CHF 139,000 and is limited to 18 pieces. There is no specific significance to the number 18, but I will add that Aston Martin Formula One driver, Lance Stroll, races with the number 18.

The Girard-Perregaux Tourbillon with Three Flying Bridges — Aston Martin Edition includes a special presentation box fitted with an array of mirrors to showcase this creation from every angle. Check out more details and videos on the Girard-Perregaux site here.

Hot Topics
Introducing: The Omega Speedmaster Super Racing With Spirate System
162 comments
Design Vs. Specs — Which Is More Important To You When Buying A Watch?
86 comments
The Time To Buy Is Now: How The Current Economic Climate Influences Watch Buying And How You Should React
51 comments
A Regret-Free Guide To Buying Your First Luxury Watch — Part Three: Higher-End Options From Omega, Rolex, Grand Seiko, And More
48 comments
My Predictions For New Omega Speedmasters In 2023
46 comments
Popular
#TBT Seiko H558 Arnie – One Serious Diver
Michael Stockton
26
Hands-On With the Seiko Prospex SRPC91K1 – Save The Ocean
Robert-Jan Broer
15
#TBT Top Vintage Seiko Divers – They’re All Here!
Michael Stockton
16