Grand Seiko has had its foot on the gas pedal ever since the start of 2022. We have seen a string of exciting new releases from the Japanese brand, and it doesn’t look like GS is planning on slowing down anytime soon. To celebrate the 55th anniversary of its legendary 44GS, the brand introduces two limited-edition models with dials inspired by the stars in the sky. Both models are executed in Ever-Brilliant Steel and feature the latest hi-beat and Spring Drive movements. Let’s find out how bright the stars shone when Grand Seiko created these two new watches.

Grand Seiko takes the celebrations of the 55th anniversary of the 44GS seriously. We saw the first of the 55th-anniversary models announced back in December of 2021. Fratello’s own Thor covered the hi-beat GMT SBGJ255 that came out in January with its stunning yellow oscillating weight. I love how Thor sees hints of the Star Wars Tie Fighter in the design of the 44GS style case. I suppose I can continue using that inspirational parallel. In that case, the new SLGA013 and SLGH009 do not only take the same design inspiration, but they also feature dials inspired by the sky the Tie Fighters try to conquer. But that’s not the whole story. 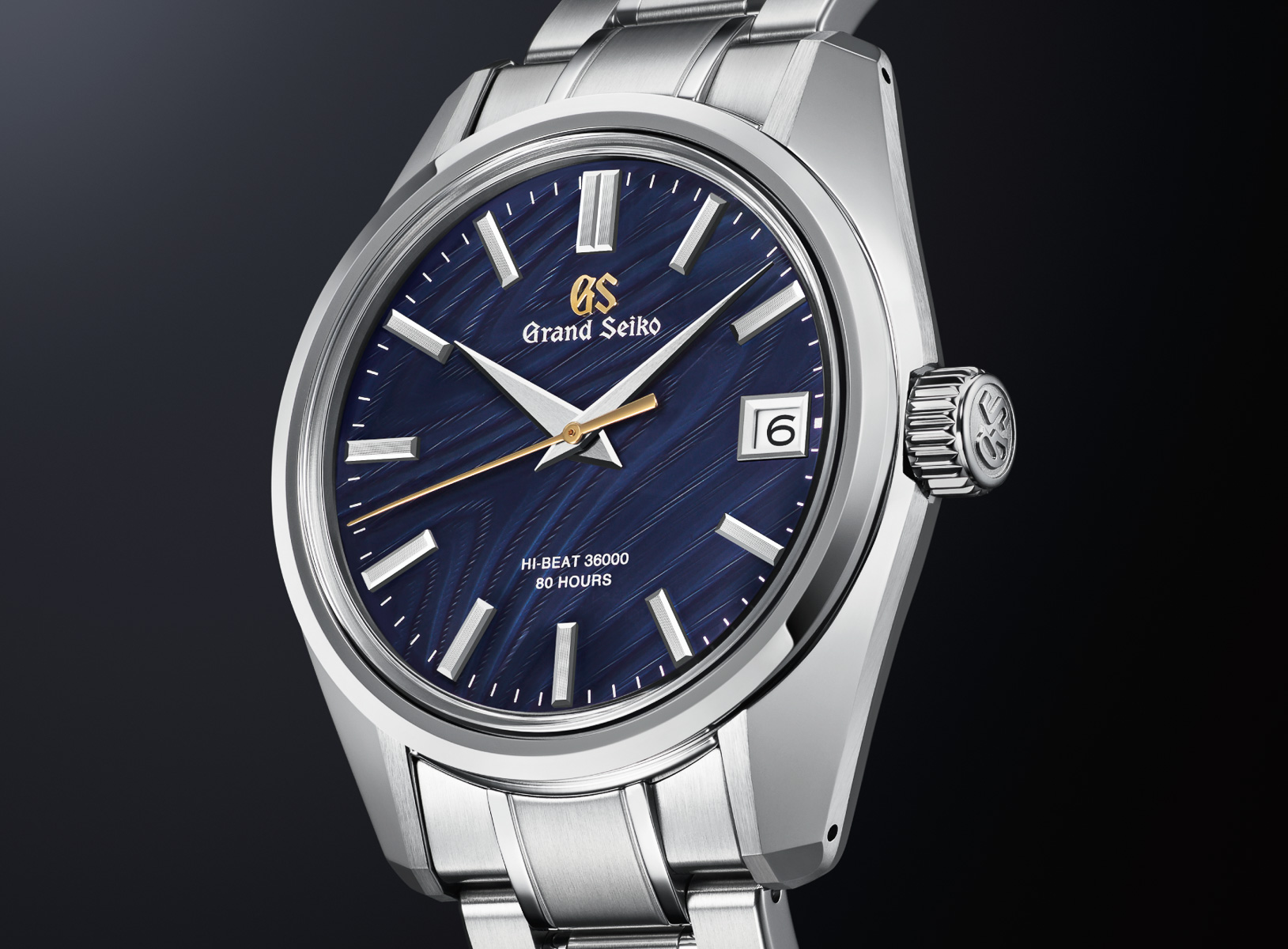 With the new SLGA013 and SLGH009, Grand Seiko adds two more models to the celebratory line-up of the 44GS models. Both models are executed in Ever-Brilliant Steel. To my knowledge, it is the first time that we have seen two Grand Seiko models executed in Ever-Brilliant Steel. We have seen the material used before for Seiko models, like for Seiko’s 55th Anniversary Diver models released in 2020. It’s a more corrosion-resistant alloy than regular 316L stainless steel and gives off a more whitish sheen. It only makes sense that Grand Seiko also starts using it for their watches.

The first of the two new models is the Grand Seiko SLGH009. The watch features the familiar 44GS style case executed in the slightly lighter-colored Ever-Brilliant steel. The 40mm case is 12.1mm high and water-resistant up to 100 meters. The watch comes with the familiar Grand Seiko style bracelet also executed in the same material featuring a three-folding clasp with push-button release. The watch features a dark blue dial that features a deeply etched pattern inspired by the movement of the stars in the sky. An extra hint of color comes in the gold-tone logo and seconds hand that slightly spice up the sophisticated looks of the SLGH009. 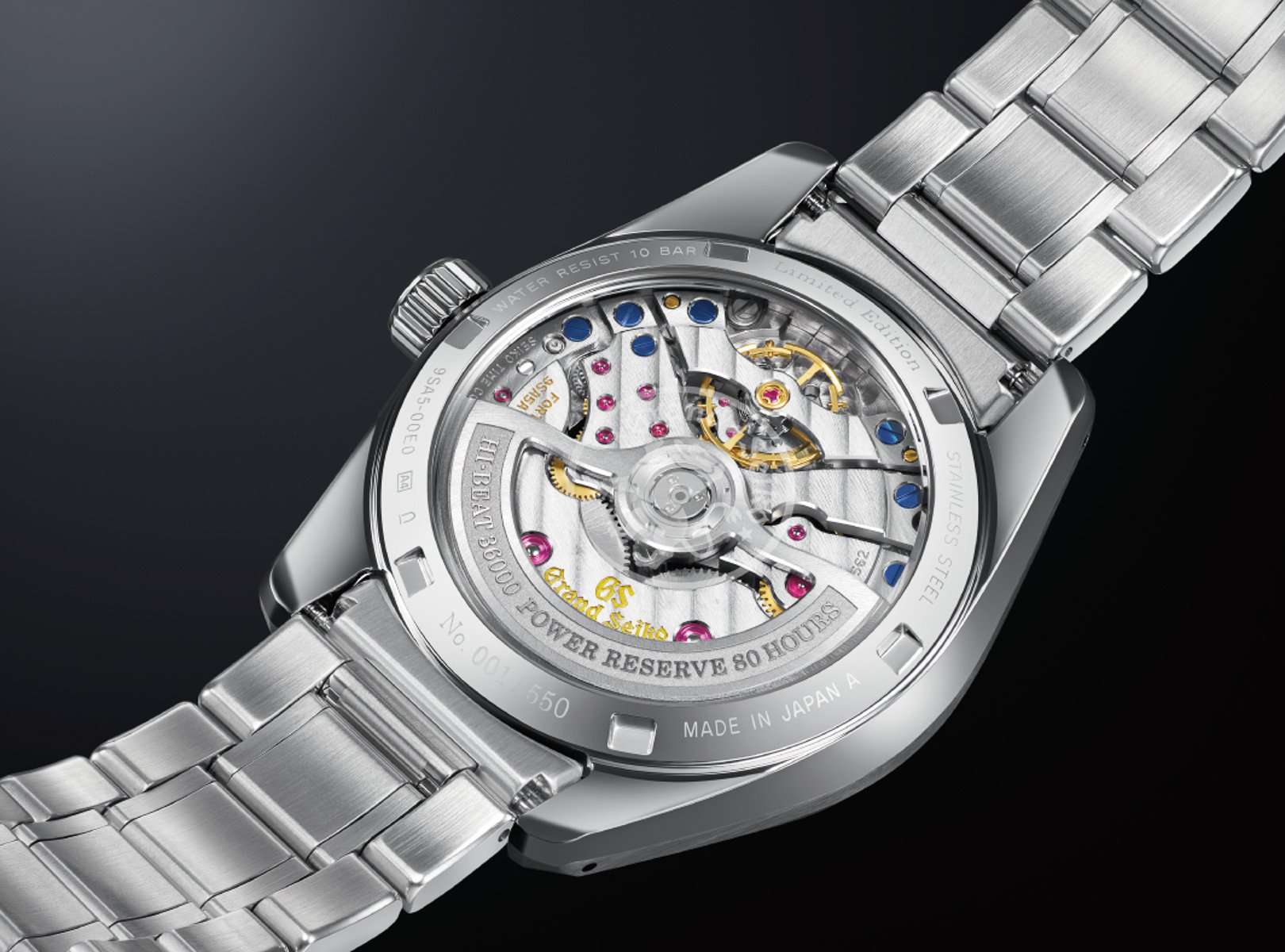 Inside the case, Seiko equipped the watch with the Hi-Beat 9SA5 movement that was introduced last year. We have slowly seen more models introducing the movement, including the much-talked-about Grand Seiko SLGH005 “White Birch”. The automatic movement operates at 36,000vph, has 47 jewels, and has a power reserve of 80 hours. The movement comes with an accuracy of +5 to -3 seconds per day. As Robert-Jan explained in his Grand Seiko “White Birch” review, the accuracy is within the strict chronometer standards of +6/-4 seconds. And knowing Grand Seiko, the movement is probably running even more accurately.

The caliber courtesy of Grand Seiko Studio Shizukuishi is visible through the sapphire display case back. As we have come to know from Grand Seiko, the finishing is impeccable and to the highest standards in the industry. The bridges come with Côtes de Genève decoration, and perlage decoration is used on the mainplate. As a result of a thinner movement, Grand Seiko could slim down the case for both watches. It’s a feature that many Grand Seiko fans will appreciate because the thickness of the cases is a much-debated topic. 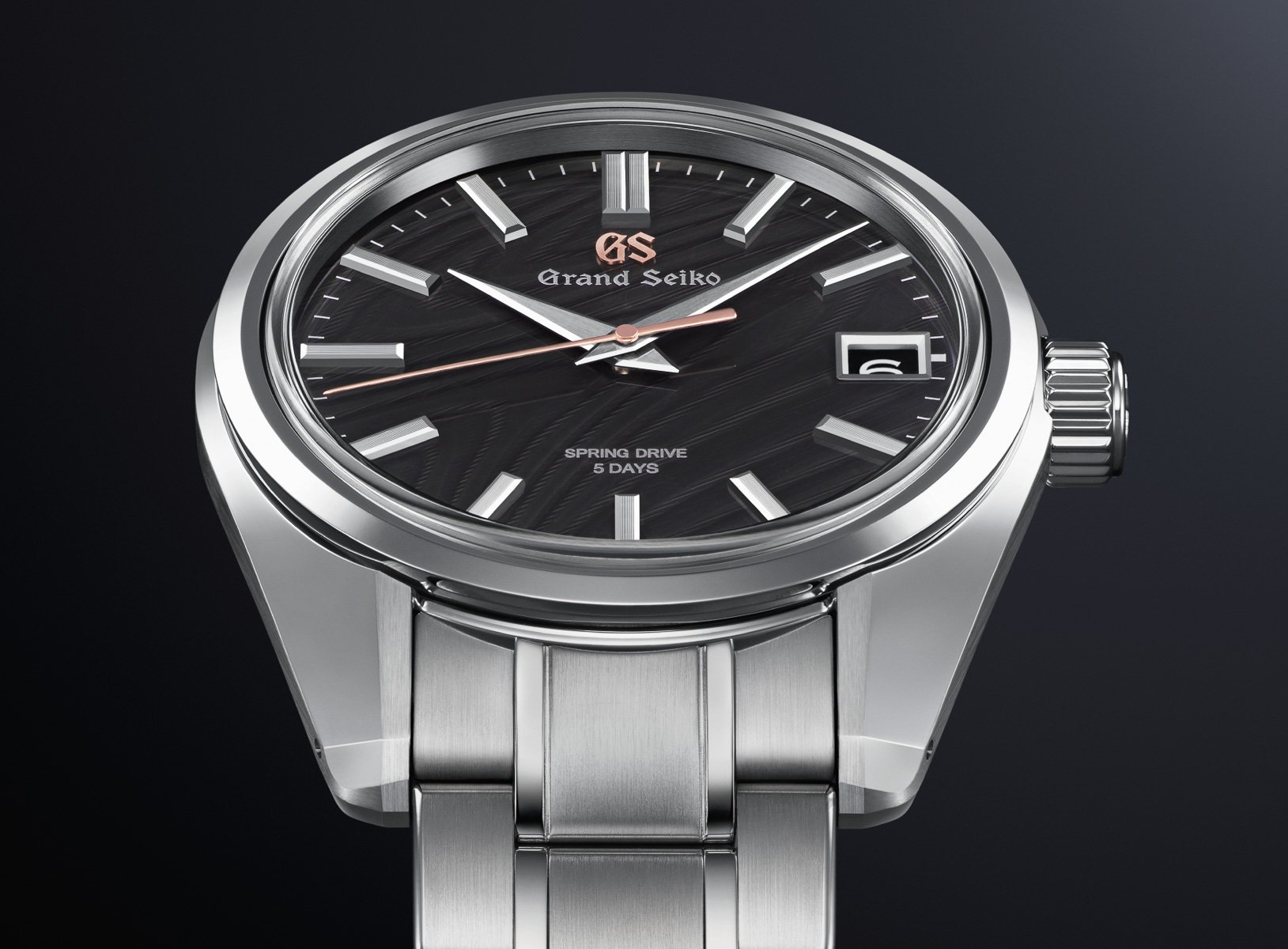 The second model is the Grand Seiko SLGA013. The watch features the same 40mm 44GS style case that is slightly thicker than the SLGH009 at 12.1mm and is also water-resistant up to 100 meters. As mentioned, the case and accompanying bracelet of the SLGA013 are also executed in Ever-Brilliant Steel. The watch features a black dial with the same pattern as used for its Hi-Beat brother. The watch also features the gold-tone Grand Seiko logo and the seconds hand.

I must say that I greatly appreciate this little hint of color on both watches as it brings a little sparkle to the watches. In the press pictures, it looks as though the blue dial stands out a little more. Let me rephrase that. Thanks to the blue color, it looks like the pattern is more present. While I would usually pick the combination of black and gold, I am on the fence with these two watches. Hopefully, I get a chance to see them from up close and get a better look to see which of the two works better with the star-inspired dial. 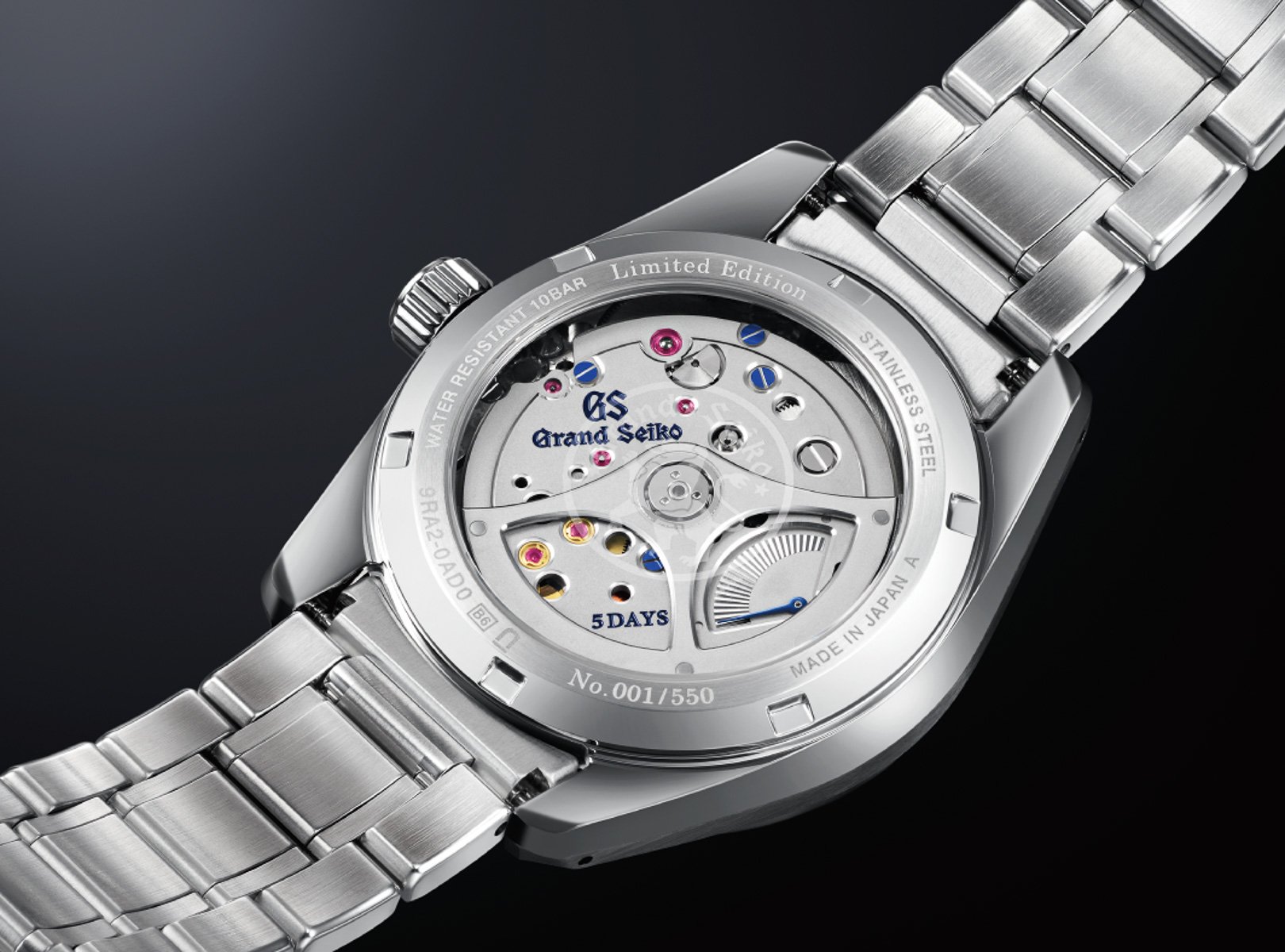 Inside the case of the SLGA013, Grand Seiko equipped the watch with its Spring Drive Caliber 9RA2. This creation of the Shinshu Watch Studio was first unveiled last year in the limited edition SLGA007. The Caliber 9RA2 is the slimmest automatic Spring Drive movement that Grand Seiko has created thus far. The movement comes with an impressive 120-hour power reserve and an equally stunning accuracy of +/-10 seconds per month.

The movement is visible through the sapphire display case back. There you will also find the biggest perk in my opinion when it comes to the update of this new movement. My biggest issue with a lot of the Spring Drive models is the power reserve indicator on the dial side of the watch. With the new Caliber 9RA2, the power indicator is positioned on the back of the watch. I have to give Grand Seiko credit for creating some incredible dials over the last two years that integrate the power reserve perfectly — with the SBGA413 as my current favorite Grand Seiko as the perfect example — but in general, my preference is the placement on the back. So I was more than stoked to see Grand Seiko solve this issue with the 9RA2. 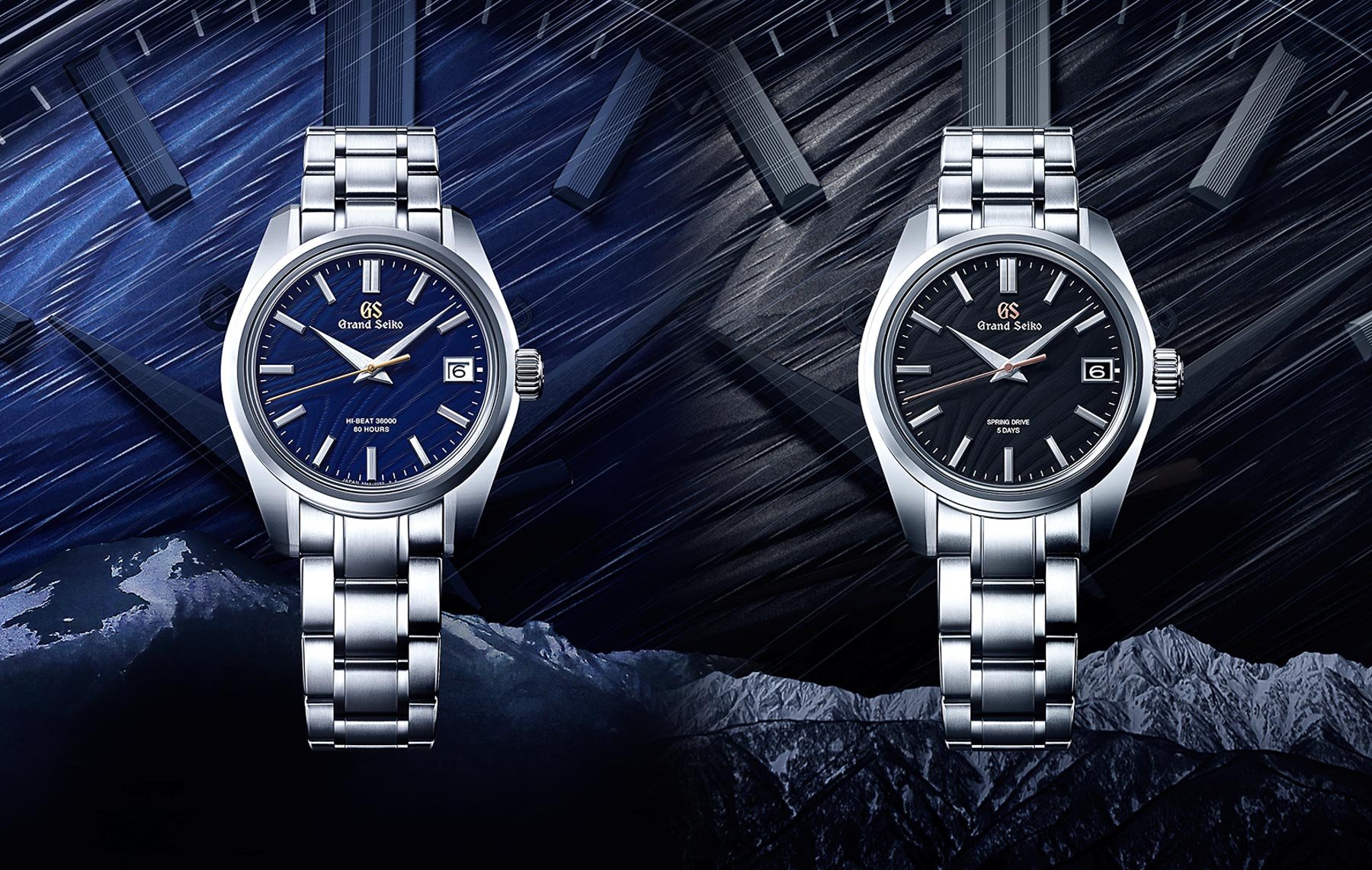 Both 44GS 55th-anniversary watches will be produced in a limited production run of 550 pieces of each model. All the watches come with their unique number engraved on the case back. The Hi-Beat SLGH009 will cost €10,500, and the Spring Drive SLGH013 will cost €9,500. Both models will be available through Grand Seiko Boutiques and selected Grand Seiko retail stores worldwide in February 2022.

As we have come to know from Grand Seiko, I have no doubts that the dials will look amazing in person. As mentioned, the star-inspired pattern seems to pop a little more in combination with the blue color. It would be my pick at first glance in combination with the Ever-Brilliant steel. On top of that, seeing the new movements used for the 44GS style models was expected. It is a great technical upgrade for the watches. 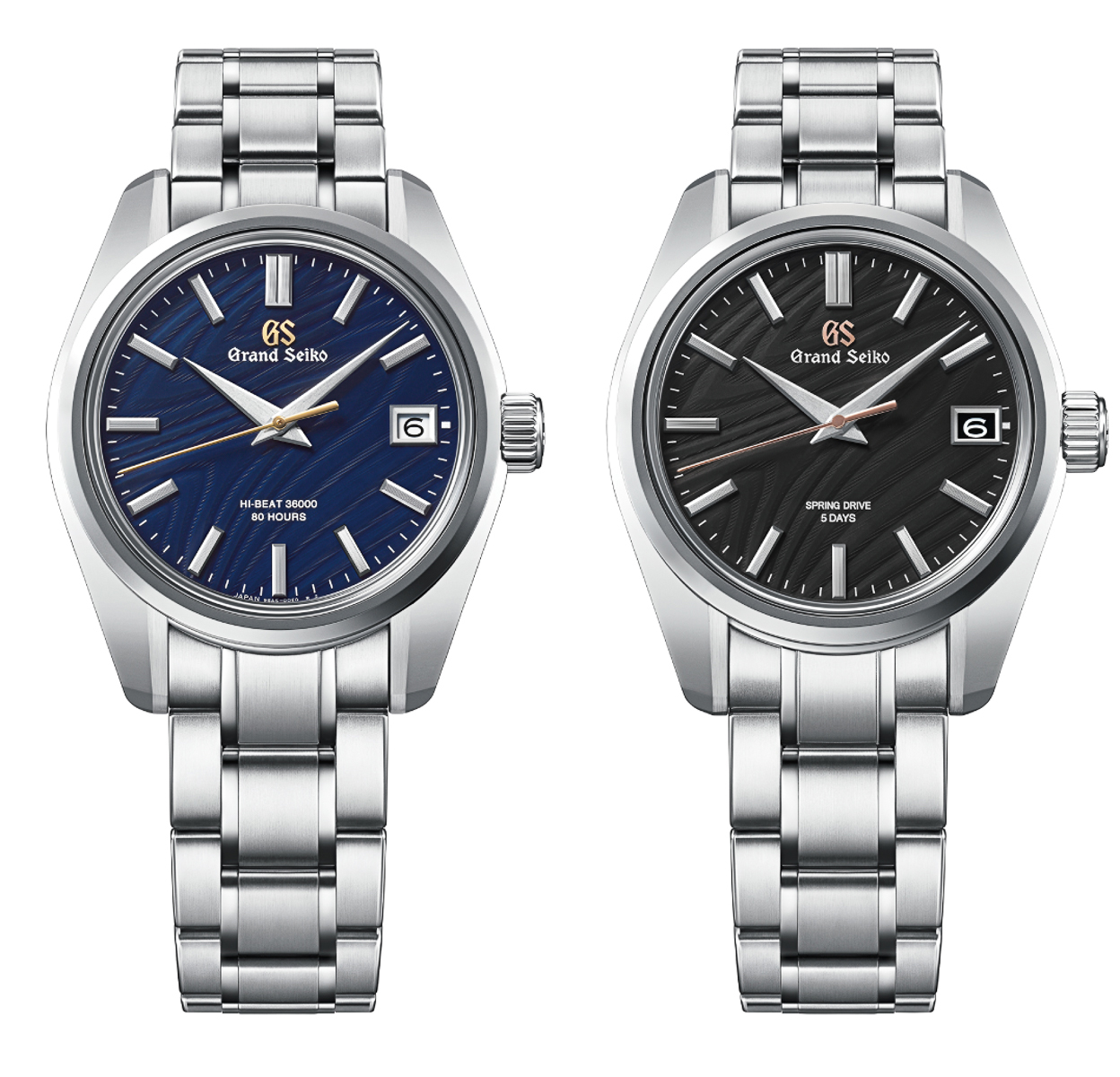 The upgrade to new movements for the 44GS style models also comes with a steeper price tag. While the prices of these two models are in line with what we have seen from the other recent introductions that feature the new movements, seeing prices for the familiar Grand Seiko models close to and surpassing the €10K mark is still something to get used to. Don’t get me wrong; the watches are a testament to Grand Seiko’s brilliant history; their design is iconic, the movements brilliant, and the finishing unmatched. If any brand offers undisputed value for money, it is Grand Seiko.

Maybe it’s just me that has to get used to the steeper pricing. This is strange in a sense because Grand Seiko has a lot more to offer than some of its competitors that have surpassed that €10K mark with plenty of their watches. Maybe I need time to get used to seeing these prices. In the meantime, I have no doubts that both models will find their way to 1,100 happy customers that will greatly enjoy these two 55th-anniversary models celebrating the awesome 44GS style and introducing star-inspired dials because they are, without a doubt, fantastic timepieces.