Quartz movements are getting more respect from watch enthusiasts these days. In my opinion, that’s largely thanks to Grand Seiko’s beautiful 9F movements. It’s a brand like Grand Seiko with its prestigious high-end quartz calibers that is making this type of movement desirable again.

Surely, brands like Breitling with its SuperQuartz, Rolex with its OysterQuartz, as well as super-high-end brands like F.P. Journe with its caliber 1210 are also to credit. But Rolex discontinued the OysterQuartz nearly 20 years ago, and Breitling mainly uses the SuperQuartz in its digital watches. F.P. Journe’s exclusivity and ballooning gray-market prices make buying a quartz-powered Eleganté an extremely costly endeavor. Grand Seiko, however, keeps pushing the 9F caliber into its attractive new collections. As the brand does so, more and more collectors are realizing that a quartz Grand Seiko is no longer a compromise. Today, the brand announces its newest release, the SBGP017. Combining signature aesthetics with a beautiful (and visible) 9F caliber, it’s a convincing package even for skeptics of quartz. 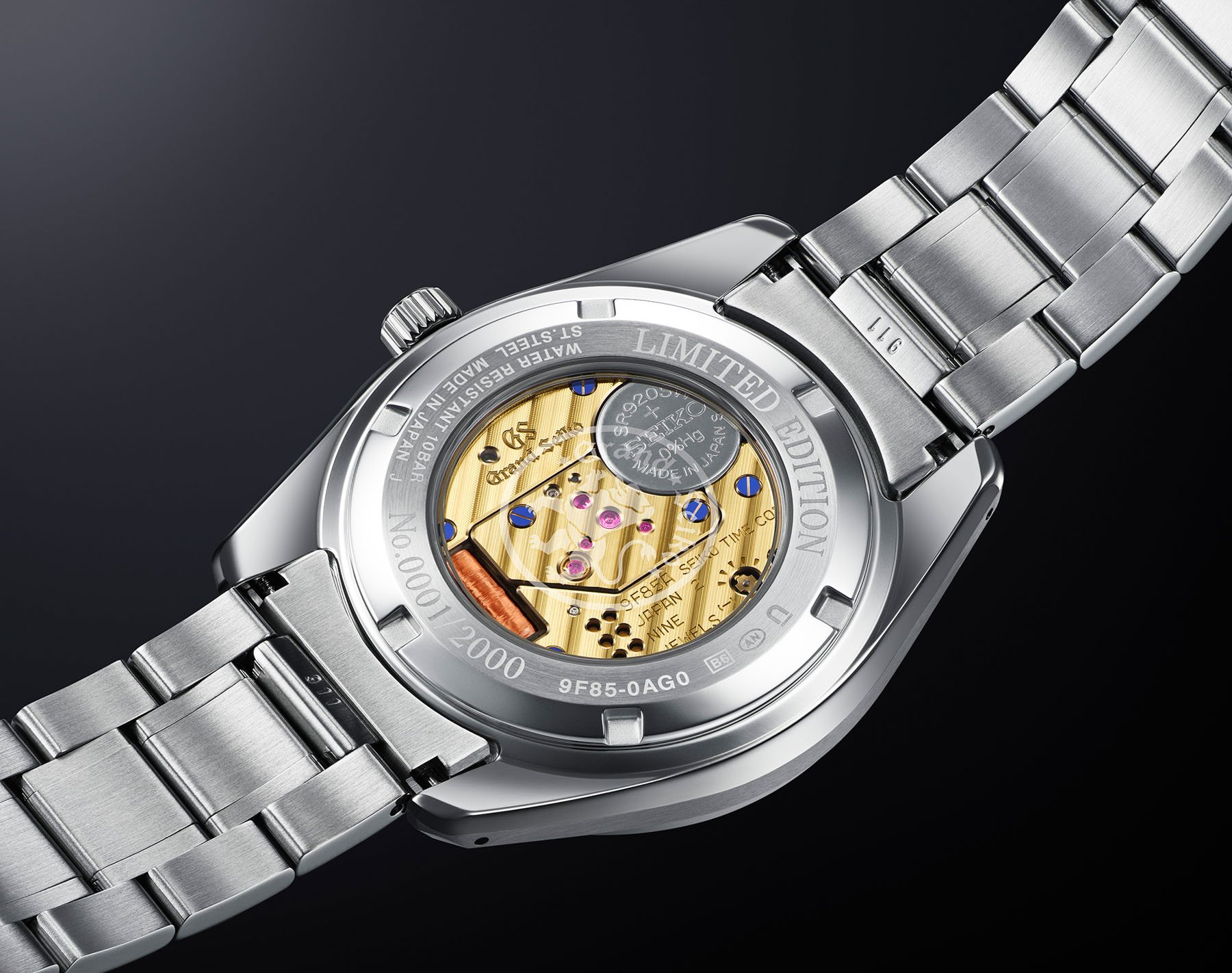 Truth be told, I needed some convincing as well. But in 2016, when I reviewed my first Grand Seiko quartz model (SBGV019G), it didn’t take long to fall for the caliber 9F. When I saw the quartz movement through the sapphire case back of that watch, I was smitten by it. Not only by its features — such as thermo-compensation and a regulatory wheel that adjusts the backlash between gears to prevent vibration of the second hand — but also by the beautiful finishing of the movement. It’s a joy to observe, despite the lack of moving parts and the battery. In fact, I think it looks nicer than many of the cheaper (or unfinished) mechanical movements I sometimes come across. 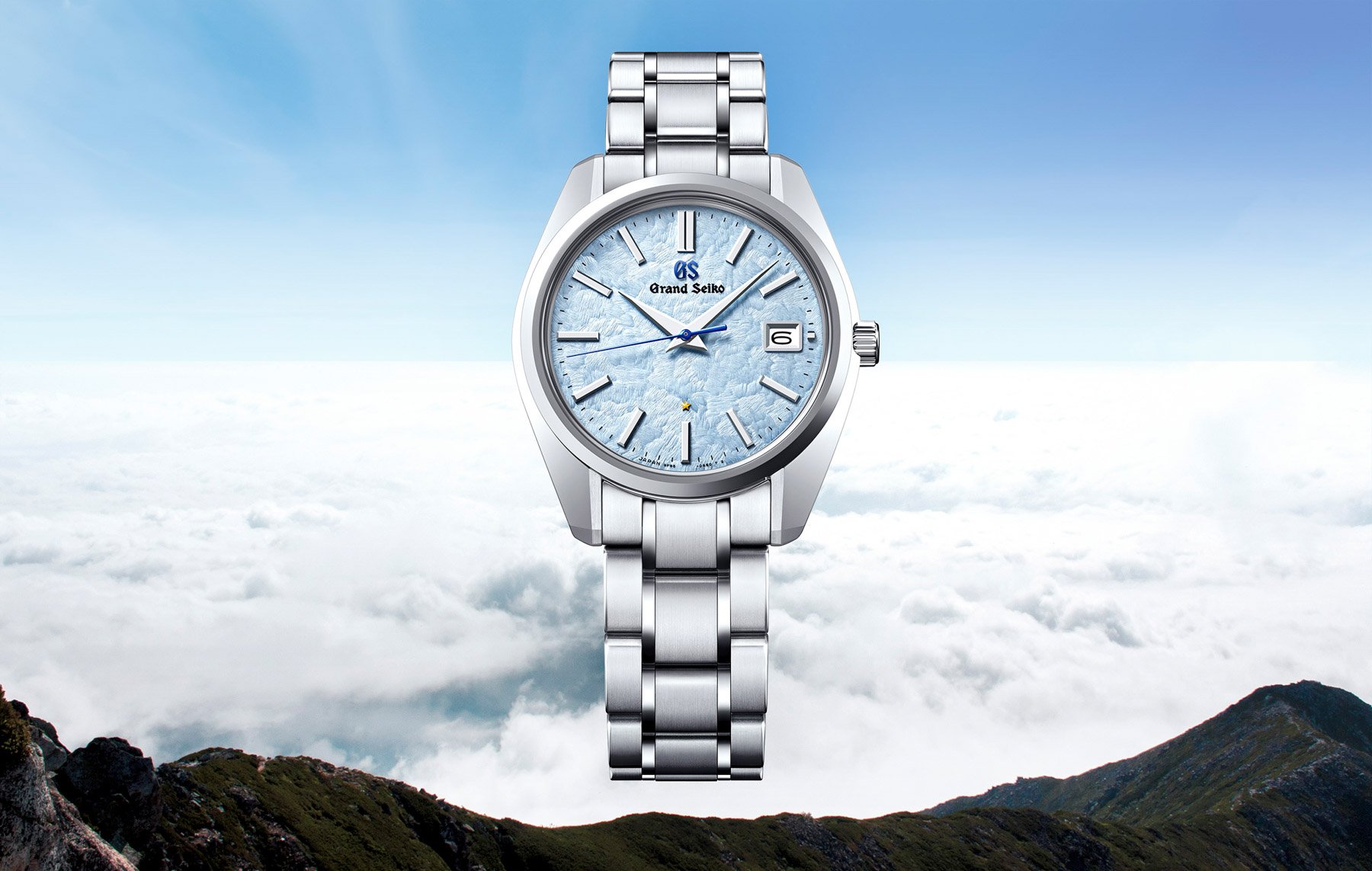 SBGP017 — A celebration of the Grand Seiko Style

Before I jump into the details of the new Grand Seiko SBGP017, let’s take a step back for a moment. This year is the 55th anniversary of the Grand Seiko 44GS design. The 44GS, or Grand Seiko Style, as it’s often referred to, was invented by Seiko’s Taro Tanaka and came to fruition in 1967 as we covered in this article. For this anniversary, Grand Seiko decided to celebrate “in style” (no pun intended) and came up with this beautiful 40mm Grand Seiko reference SBGP017. This watch belongs to the Heritage Collection and its official name is the “44GS 55th Anniversary Limited Edition”.

For most people, the beauty of Grand Seiko is not only in the 44GS-style case but also in the dial. Grand Seiko is famous for the work of its dial magicians, and the SBGP017 is another perfect example. As always, the poetic marketing gurus at Grand Seiko came up with an amazing description for this blue dial. 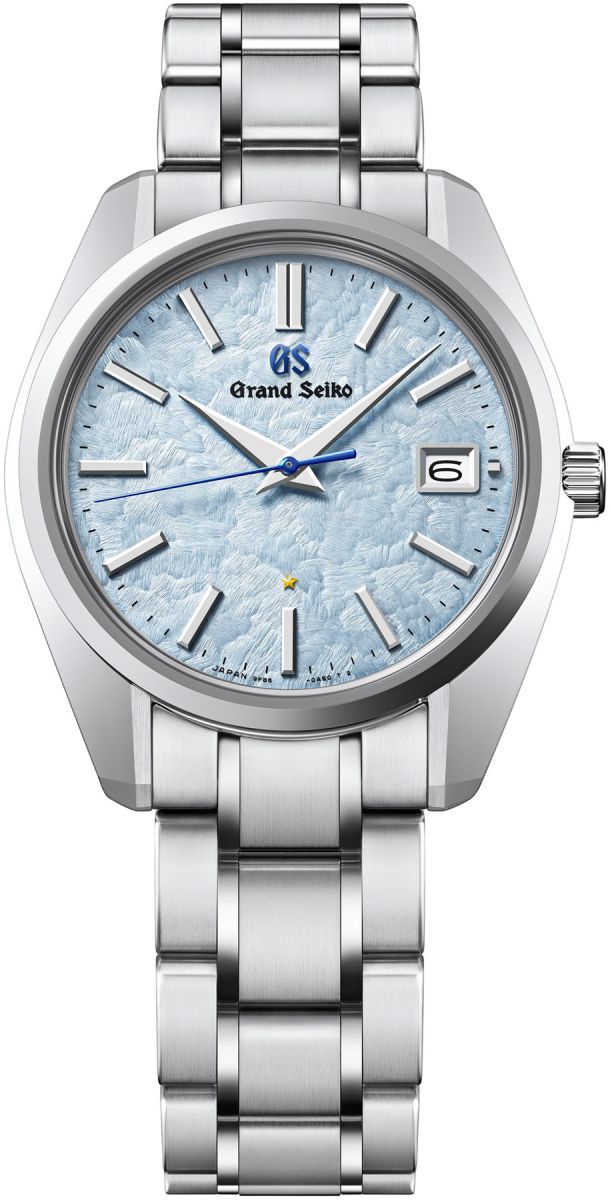 According to them, the dial is inspired by the sea of clouds that can be seen in the mountain area of the Shinshu region in Japan. Please note, however, that this sea of clouds can be only witnessed on “some mornings”, definitely not all. The press release continues to explain how this sea of clouds originates, but I will happily direct you to the official Grand Seiko website for the full description. Jokes aside, the textured blue dial on this Grand Seiko SBGP017 simply looks stunning. I am wondering what nickname the community will come up with now. It also made me smile to see that Grand Seiko itself didn’t decide on a nickname this time. I think this is something the enthusiasts and collectors need to do, not the brand. 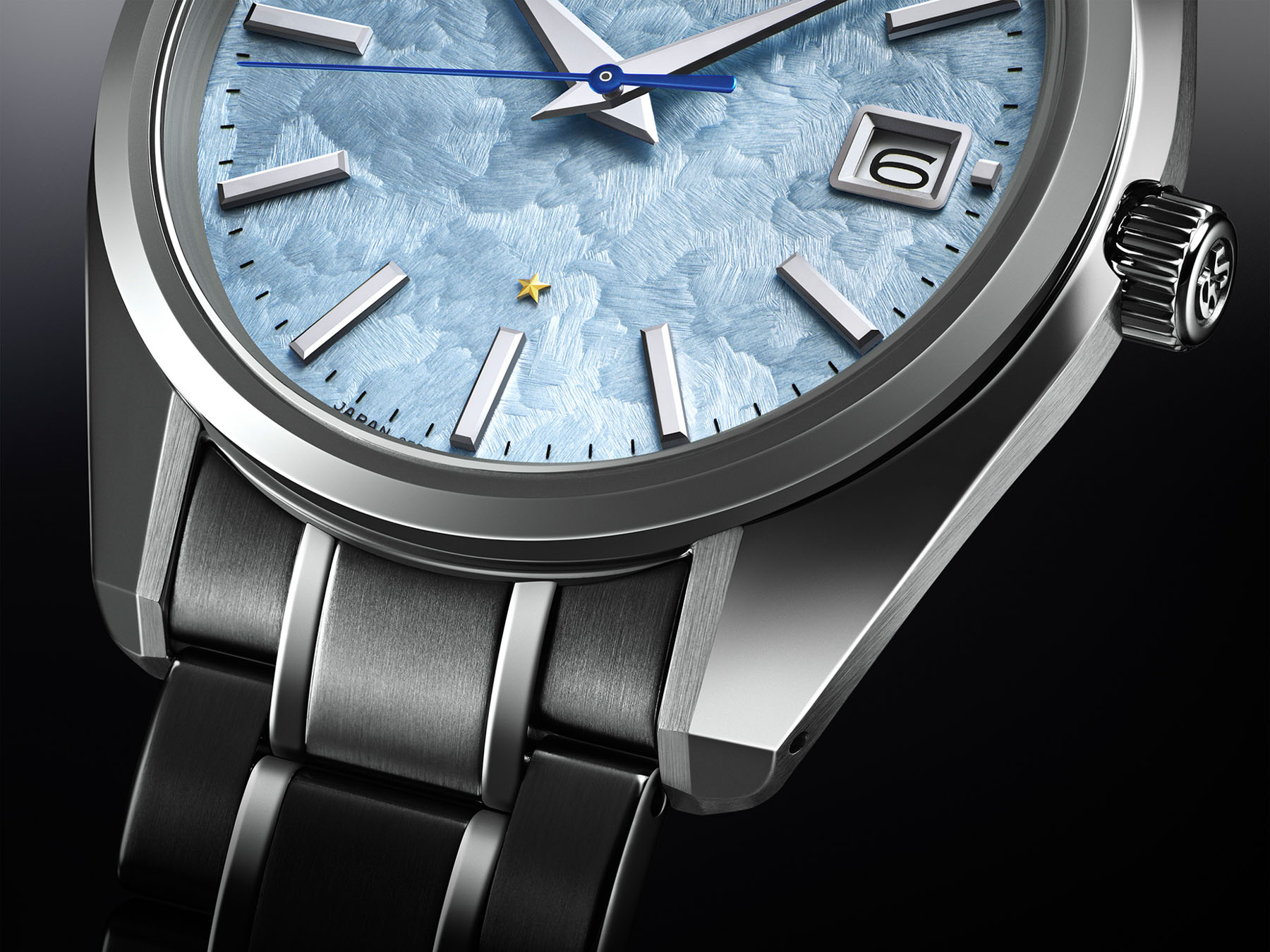 On the dial, you’ll find a blue applied GS logo at the top, as well as a gold applied star at 6 o’clock. This five-pointed star indicates that it has a 9F quartz movement with a deviation of just ±5 seconds per year. Caliber 9F85 also allows you to adjust the hour hand in one-hour increments without stopping the seconds. The date also changes instantaneously at midnight, so you’ll never see the calendar in “limbo mode”. On the Grand Seiko website, you will find a brilliant rundown of all features of the 9F calibers, which is worth a read. As always, the applied hour markers, handset, and date-window frame are impeccable when it comes to finishing. 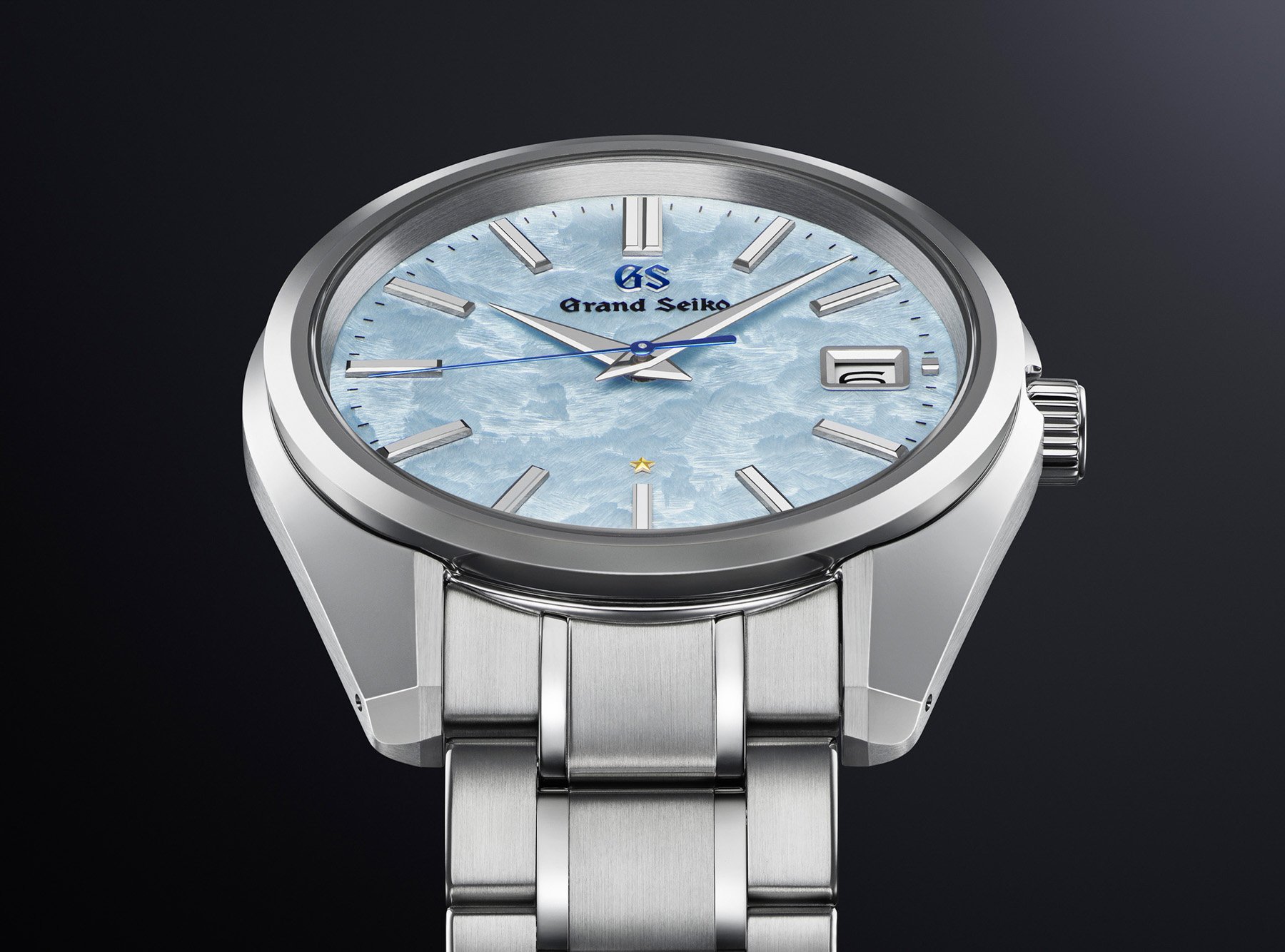 Some more thoughts on the SBGP017

The case of the Grand Seiko 44GS 55th Anniversary Limited Edition measures 40mm in diameter and only 10.7mm in height. Looking at my own Grand Seiko with a 44GS-style case (SBGJ201), this new release is nearly 4mm thinner. With the Evolution 9 series, the thickness problem has been solved, but that, of course, comes at a certain price. The GS Evolution 9 watches are significantly more expensive than the other GS collections, such as the Heritage and Elegance. The SBGP017 with its thinner case has a much more attractive price tag of €3,800.

Grand Seiko will only produce 2,000 pieces of the SBGP017, and they will be available as of July 2022. As always, we’d like to hear what you think, so share your thoughts on this release in the comments below.