Blancpain’s Air Command is a pilot’s watch that hails from the 1950s. The historical Swiss brand calls it “a legendary chronograph”, and reportedly, there are fewer than a dozen specimens in existence. Other than a number of Trilogy models with Fifty Fathoms cases and bezels spanning from 1996 to 2003, the Air Command never got a series release. That was until 2019, however, when Blancpain decided to breathe life into it with its very own case and look.

The first in this new series was a 42.5mm limited-edition model that looked almost identical to the vintage original. Last year, two updated models in new materials donning a new color scheme brought along a regular collection. The pair have made a return this year but in a mini-me version. Enter the Air Command 36.2mm Flyback Chronograph with a countdown bezel. 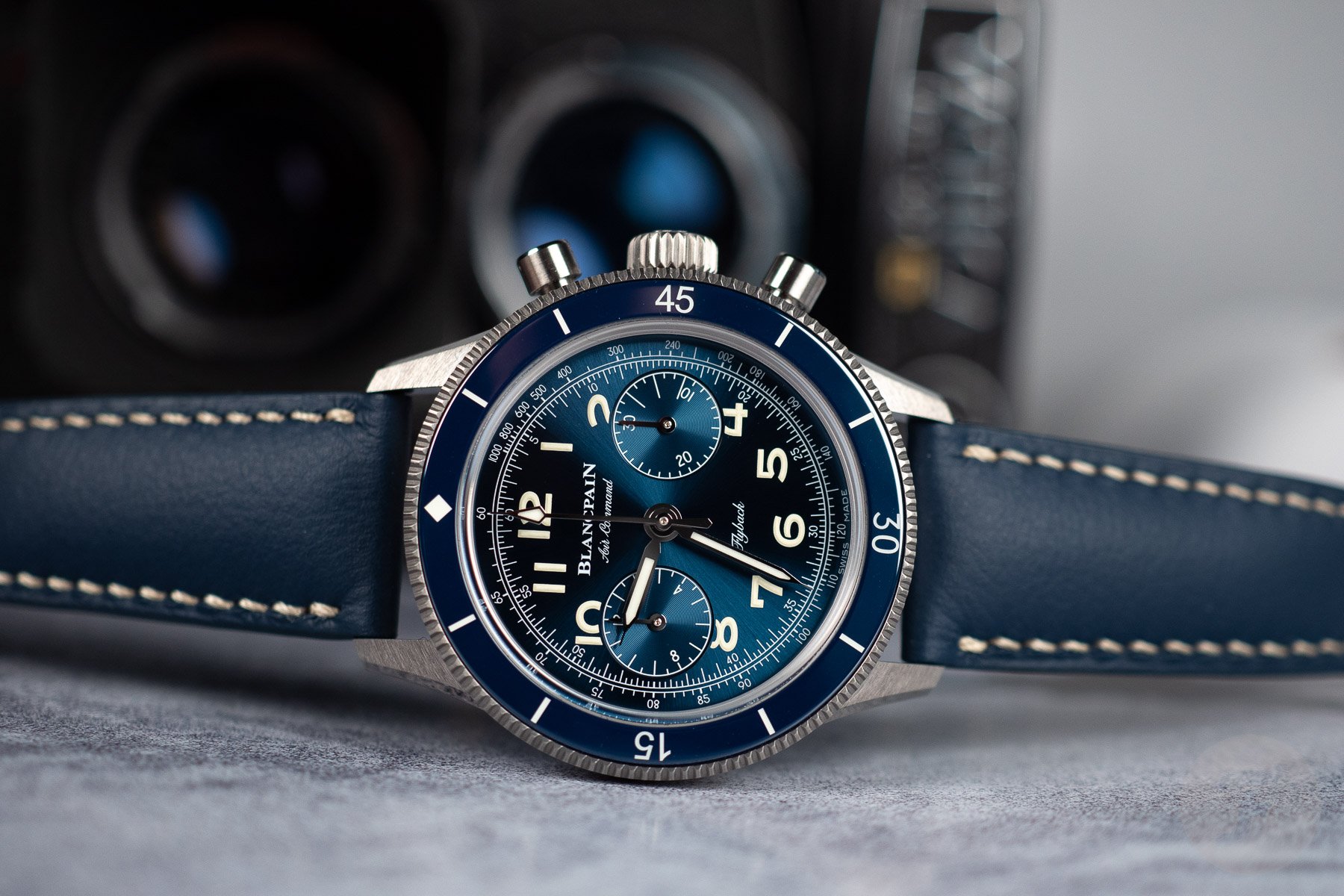 There is a theory about the Air Command surrounding its origins. However, no official documentation for the model exists to verify that. A rumor that cannot be substantiated is a tale at best (or a ploy to my inner cynic). That said, people love stories. It’s human nature. It’s how we preserve culture. Stories evoke emotions. Stories sell. If you want to indulge in a bit of mind-messaging by a brilliant storyteller, head to Rob’s review here. Since I’m a bit of a tech head, I’d rather get down to the “real” elements. And there are plenty of them to savor. 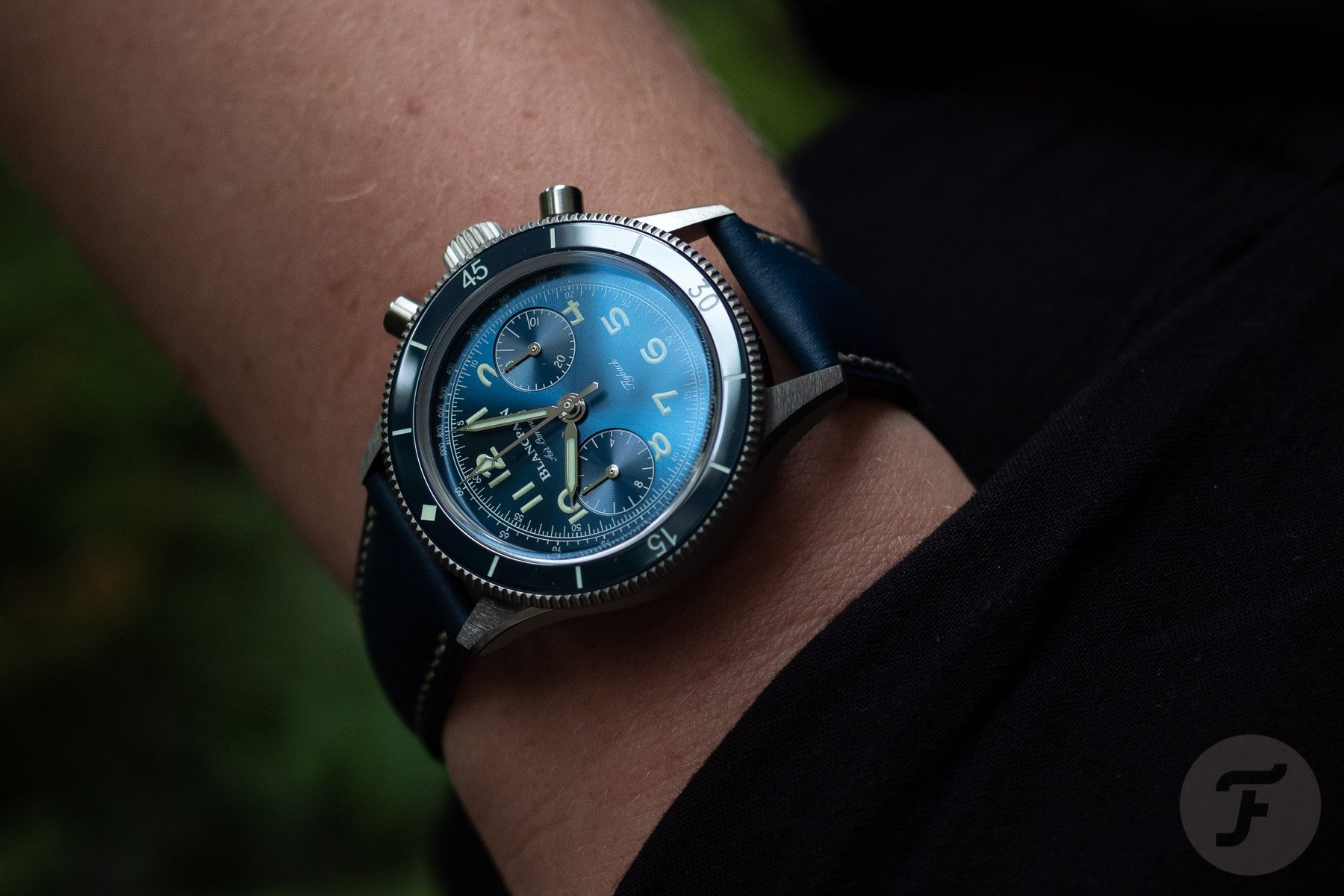 Let’s talk about the size

As they say, be careful what you wish for. All that noise about making serious watches (conventionally) for men that women can rock on smaller wrists? Ha, thanks guys — it pays off. The new Air Command comes in a 36.2mm case that is 11.5mm thick. Now, that’s an interesting one. Blancpain doesn’t explain why it goes from the prior 42.5mm releases to the latest 36.2mm duo, skipping a few popular sizes between. Given the brand is part of the Swatch Group, however, I would imagine that it was a calculated decision. 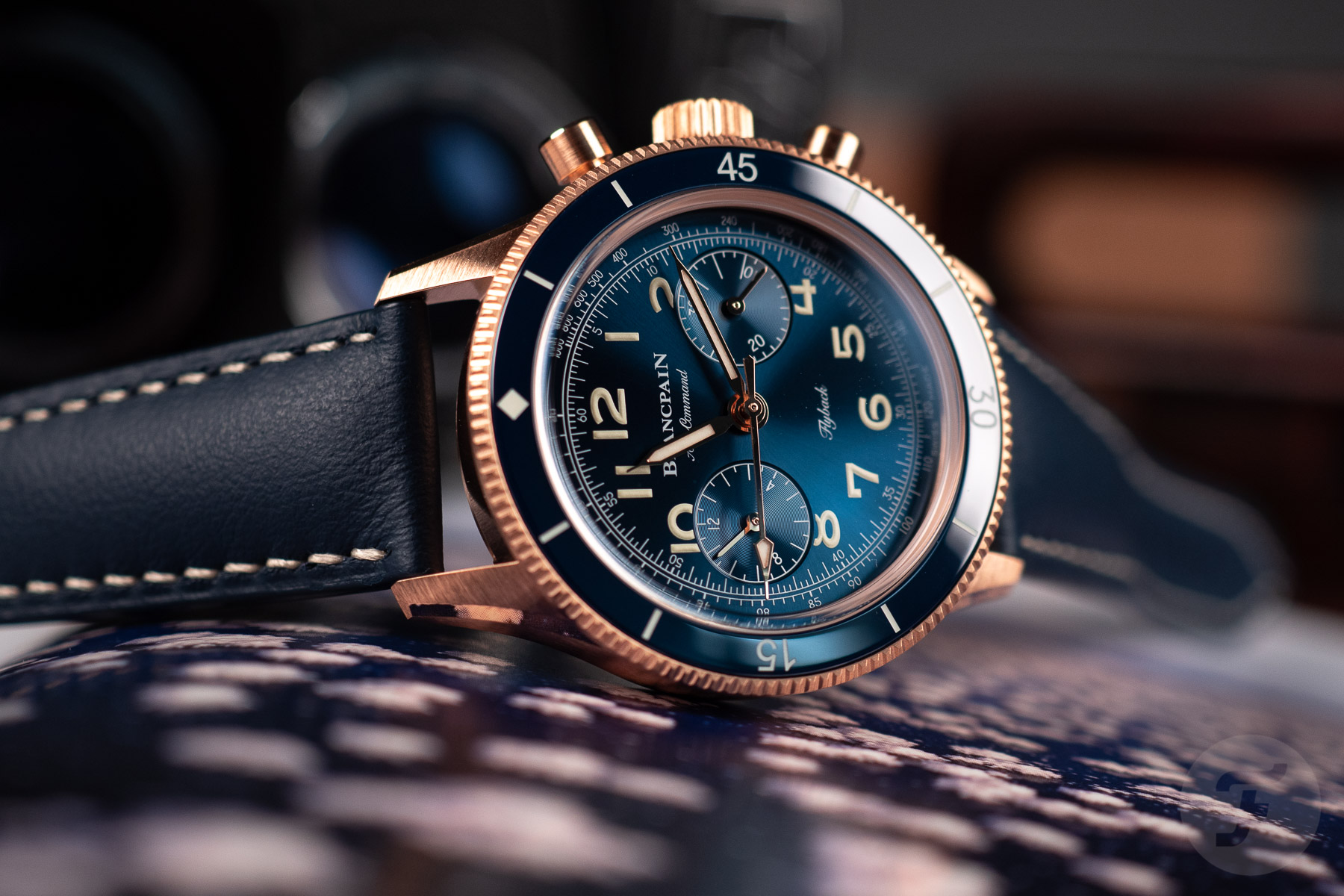 Small but not too small

Personally, I certainly wouldn’t like it to be any smaller. Even a 37mm or 38mm case would work really well. Nevertheless, when it comes to fit and comfort, the new Air Command is faultless. And that is not just my verdict, but also those of our small-wristed male peers. The point is that the brand may be missing a trick by touting these models specifically for women in its literature. You can also hear about its appeal from a man’s perspective in Thor’s introduction of the Air Command 36.2mm here. 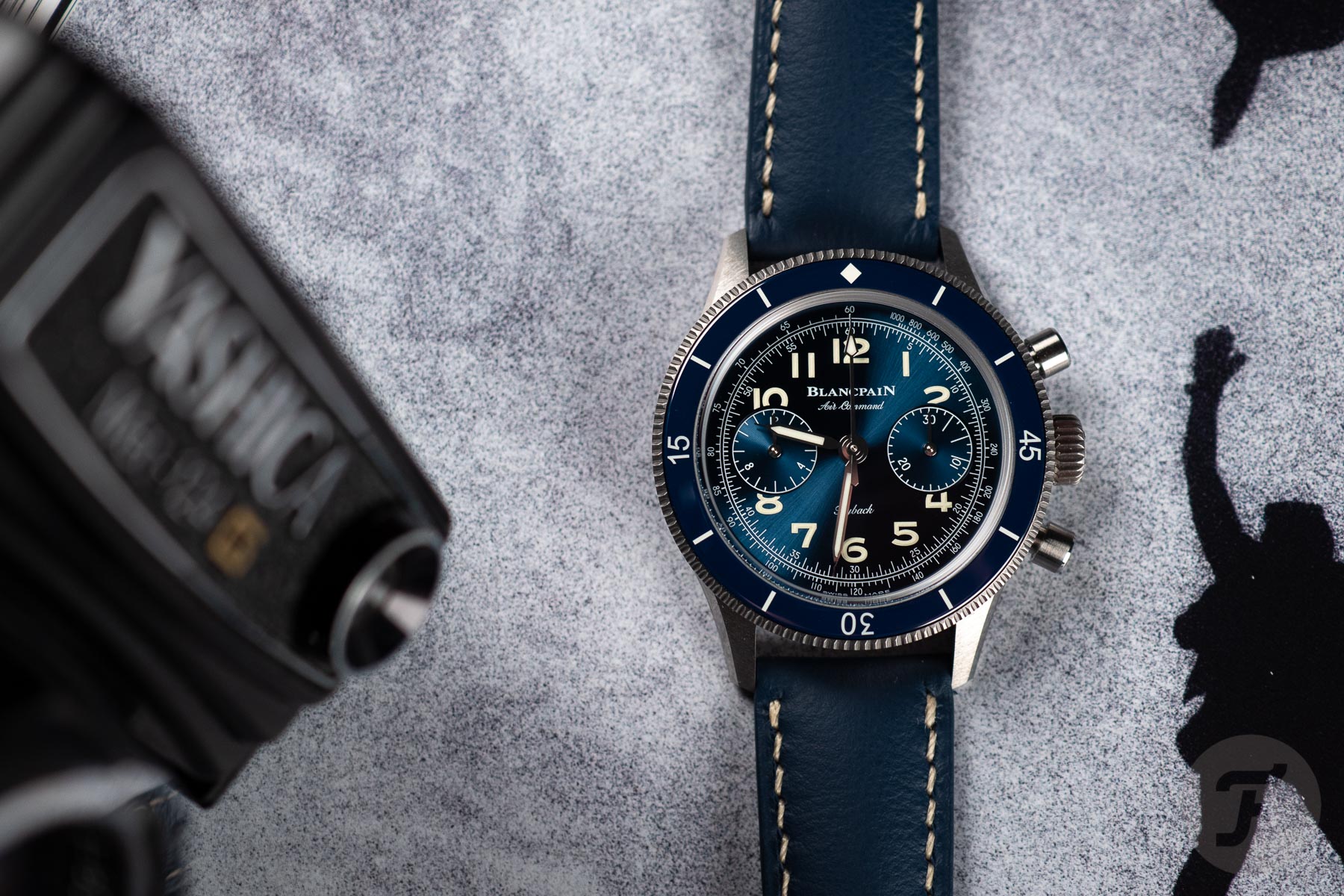 Size is one thing. Proportions are another. I must say, if I hadn’t seen the 42.5mm and 36.2mm models lined up side by side, I would have nothing to pick on. Proportionally, the 36.2mm model stays true to the original Air Command (you can see a photo of the vintage piece along with the 2019 reissue in Mike’s review here). But now that I can see how the bezel of the larger model opens up the dial by being just a touch skinnier, I would like that better on a smaller face. Granted, the bi-directional bezel needs to double up as a countdown timer. I still think the markings on its ceramic insert would be legible enough in a narrower space. 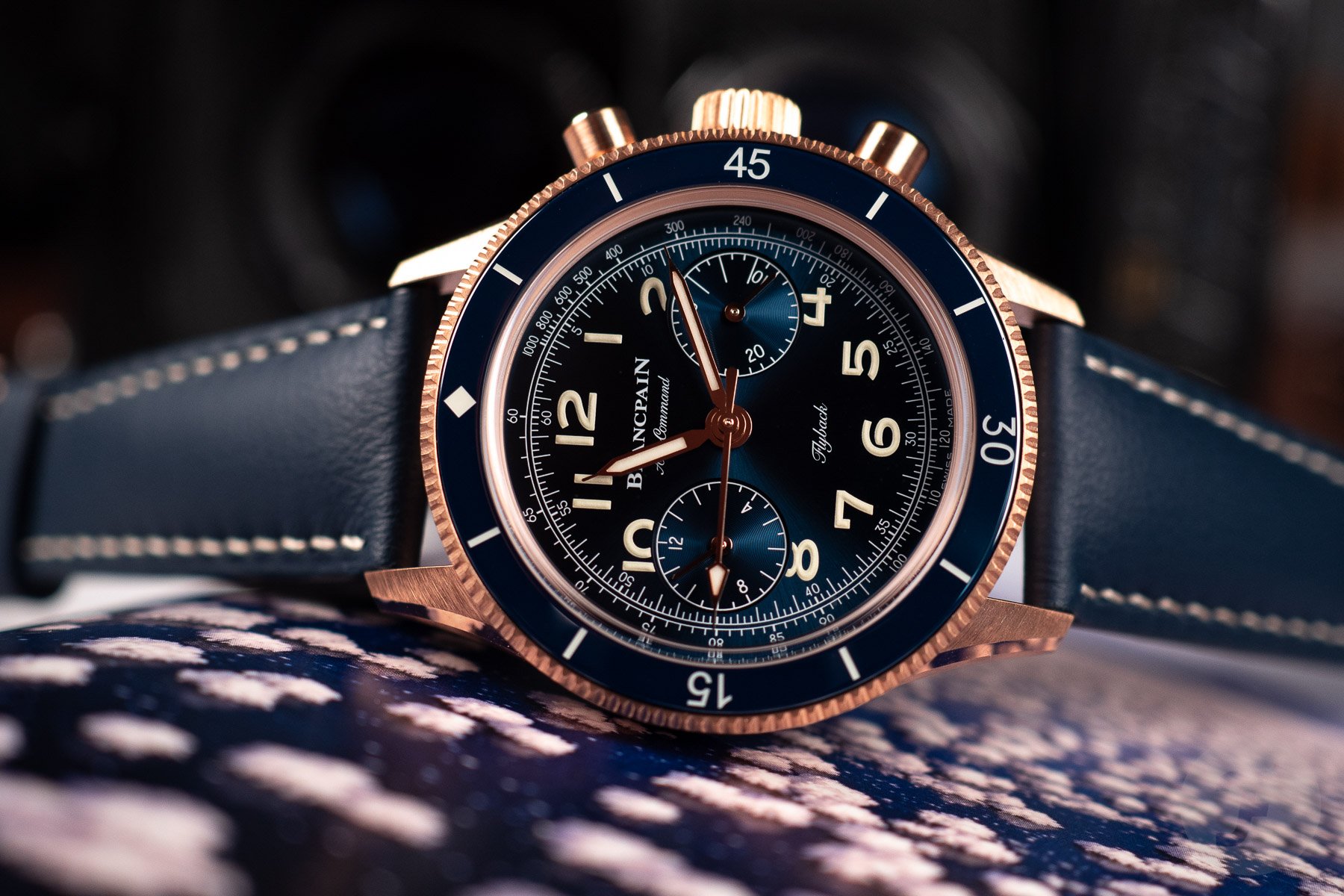 Let’s talk about the style

And legibility is a bigger challenge on a smaller face, especially for a chronograph. The new Air Command retains all the features of the bigger modern counterpart. On the outer edge of the dial is a tachymeter scale, and working inward, we find the minute markers, the hour numerals, a 30-minute register and 12-hour register along with a central chronograph hand, the hour and minute hands, as well as the brand and model names. There’s a lot going on. 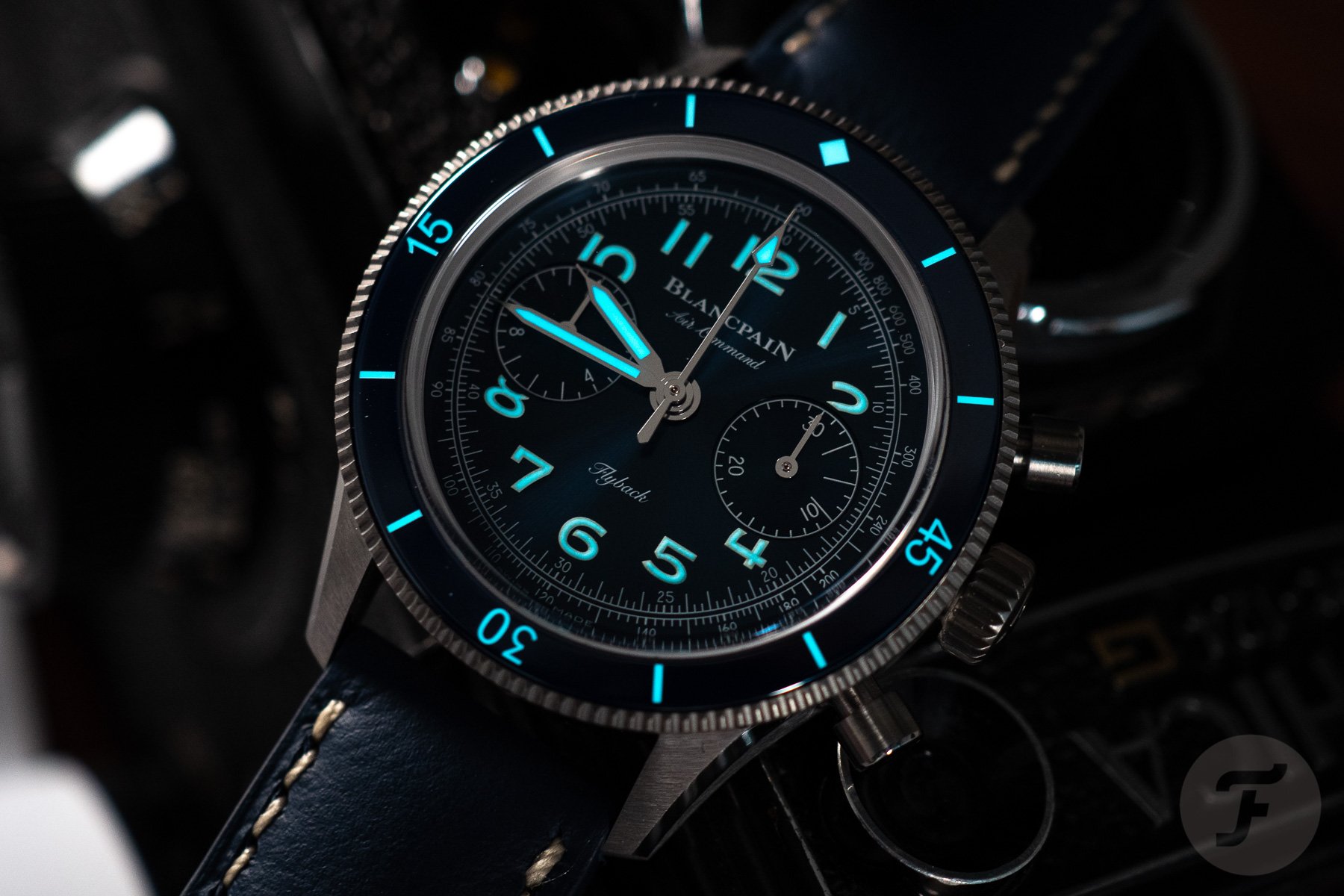 Thankfully, the dial layout is easy on the eye, a credit to the original’s design. The deep sunburst blue color creates a beautiful backdrop that enhances readability. The Super-LumiNova-filled hands, hour numerals, and countdown markers certainly aid legibility in dim conditions. Staying faithful to the vintage model are also the box-type sapphire crystal and the piston pushers to complete the style.

Let’s talk about the materials

As with their predecessors, the new 36.2mm models also come in brushed 18K red gold and Grade 23 titanium. For the gold variant, Blancpain has bucked the trend of rose gold to craft the Air Command in red gold. Red gold is redder because of its higher copper content. The deeper hue holds up really well against the darker blue palette. The finishing is superb with alternating satin-polishing, beveling, and knurling that have been done to perfection. 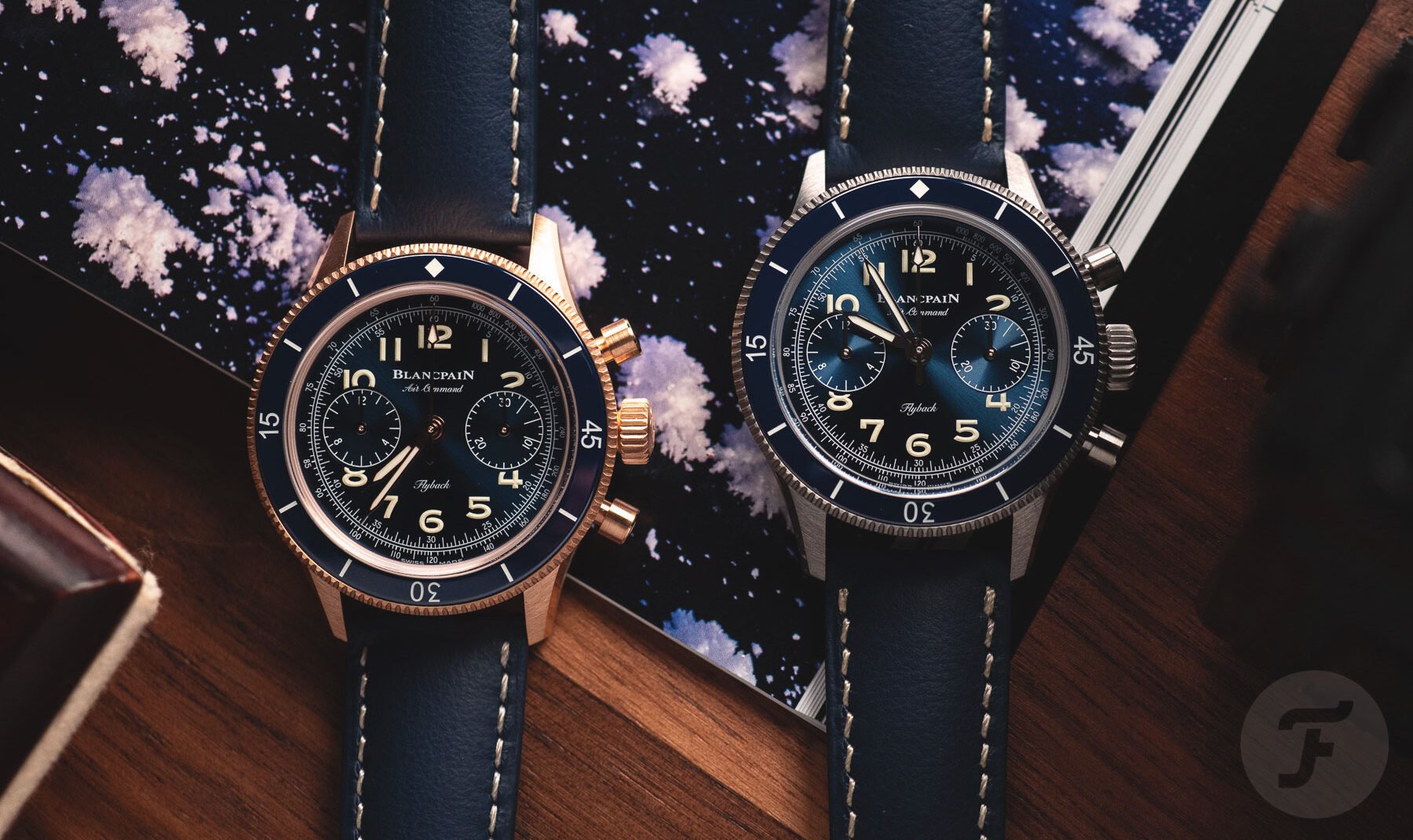 As for the titanium variant, Blancpain states Grade 23 titanium is of  “exceptional quality [and] rarely used in watchmaking”. This titanium alloy is said to be of higher purity than Grade 5 with lower oxygen, nitrogen, and iron content. Performance-wise, it has better ductility and fatigue strength. For this timepiece, the material feels the same as Grade 5 to the touch, yet it inherits improved toughness against fracture. 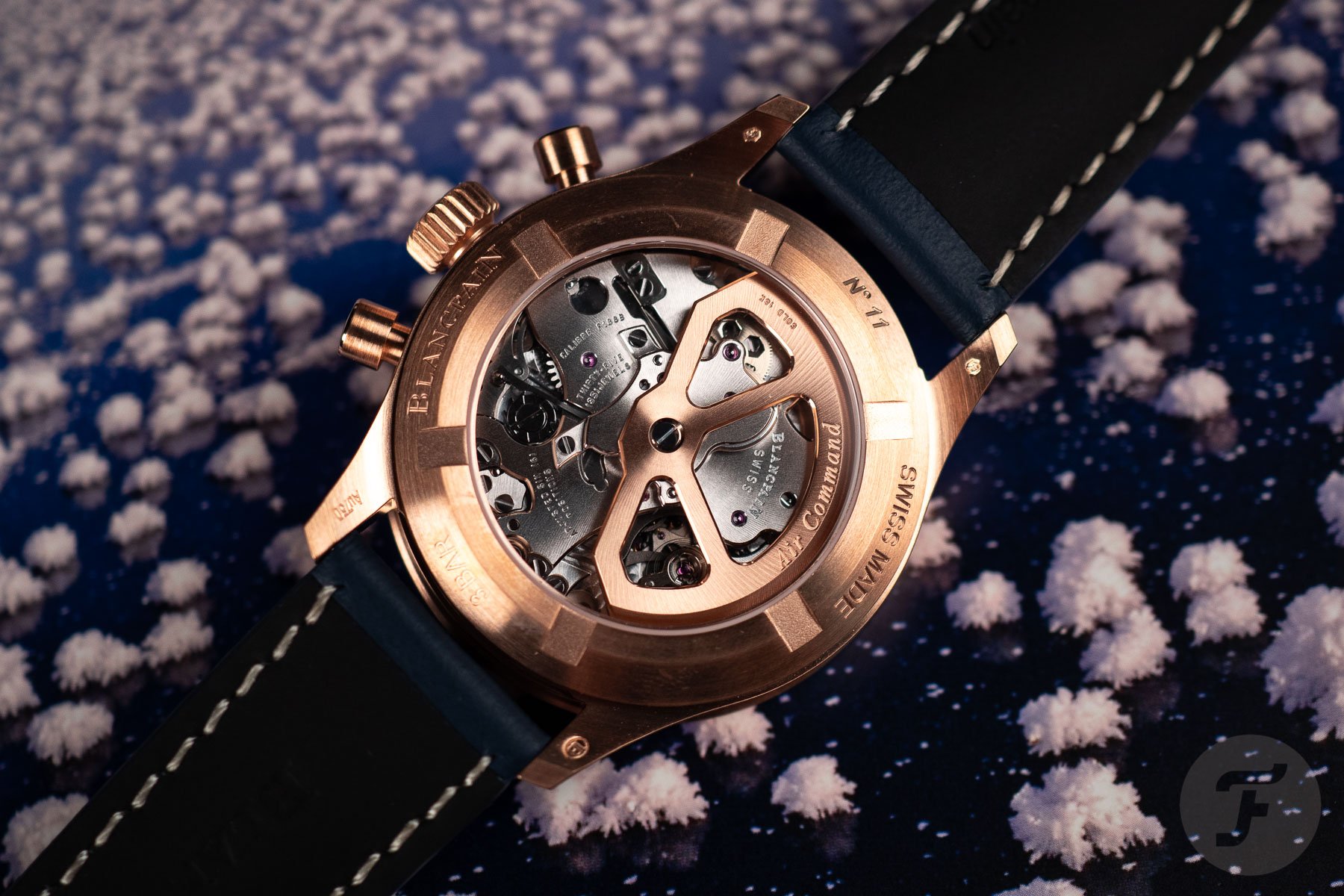 Let’s talk about the movement

Both the titanium and red gold models are powered by the in-house F188B caliber. This automatic movement employs a superior column-wheel system with a vertical clutch for the flyback chronograph. The F188B comprises 255 components and 35 jewels, including a skeletonized rotor and a silicon balance spring. It beats at 21,600vph (3Hz) and offers a 40-hour power reserve. Blancpain aims to indulge you with a good view of this exquisite mechanism. Through the exhibition case back, you can admire the traditional finishes such as perlage, snailing, and beveling, which have been done by hand. 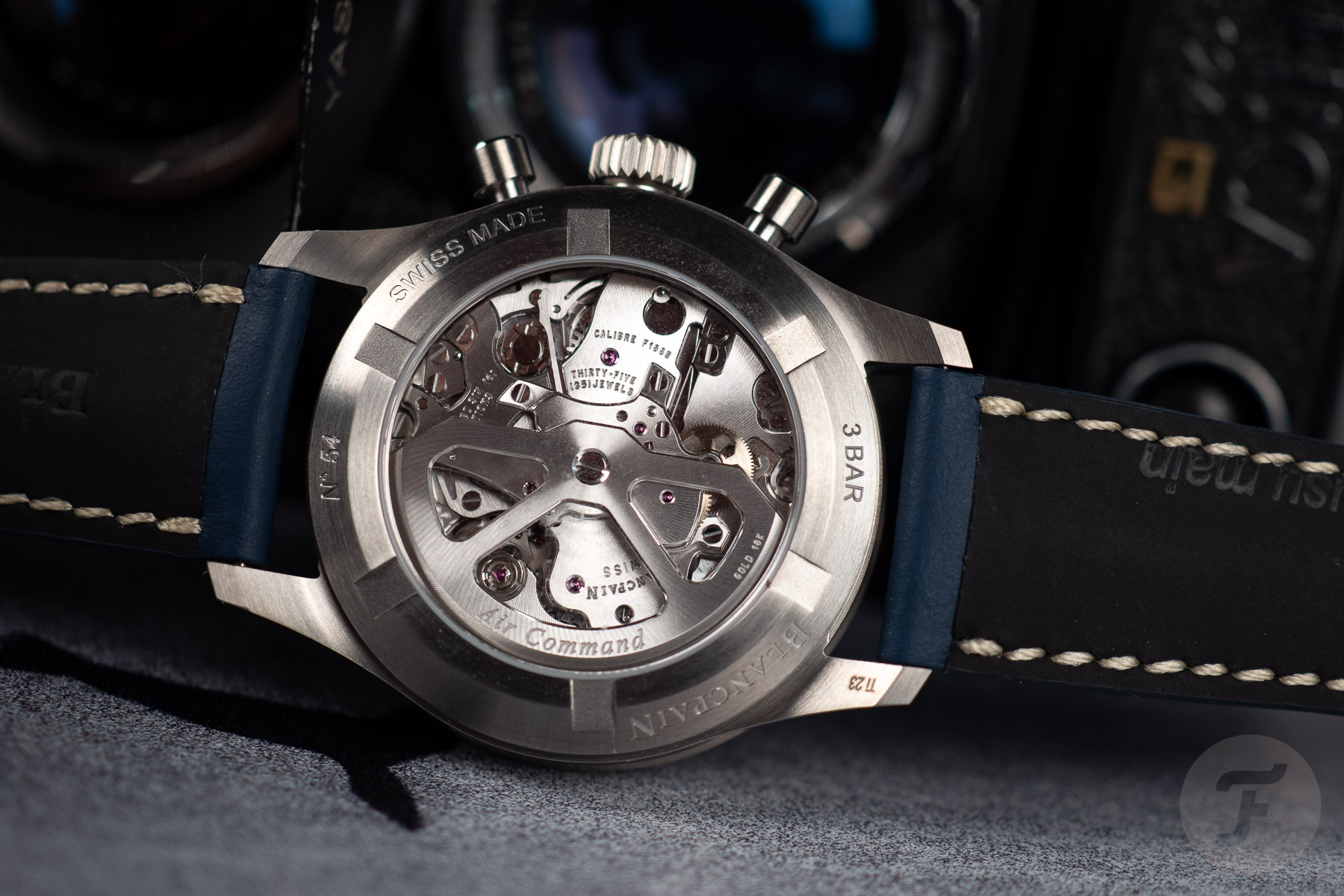 I recall the rotor for the debut model in a propeller design. Unlike Rob, who was utterly put off by it, I was a big fan. You can read about his contempt in this recent hands-on review of the bigger Air Command here. True, it didn’t stylistically “work” in gold. But the point of the propeller was to minimize the surface area and show off the wonderful movement underneath. And the inspiration from aircraft was evident. So now we have a skeletonized rotor. There is nothing wrong with it. I mean, in the high-end segment, skeletonized rotors are…”common”, for the lack of a better word. As a proponent of the weird (rare) and wonderful, I would call for the propeller to make a comeback.

I take my hat off to Blancpain for creating the 36.2mm Air Command. It is not a dumbed-down version for smaller wrists. Its high-spec execution commands appreciation (pun not intended). That said, for me, the style and color palette are too traditional. Maybe there are women who would like that. I honestly haven’t seen any female wrists sporting this style of watch except those working with watches. Maybe new color schemes would make a difference. For now, I’m not convinced it’s a watch for women as intended by the brand. 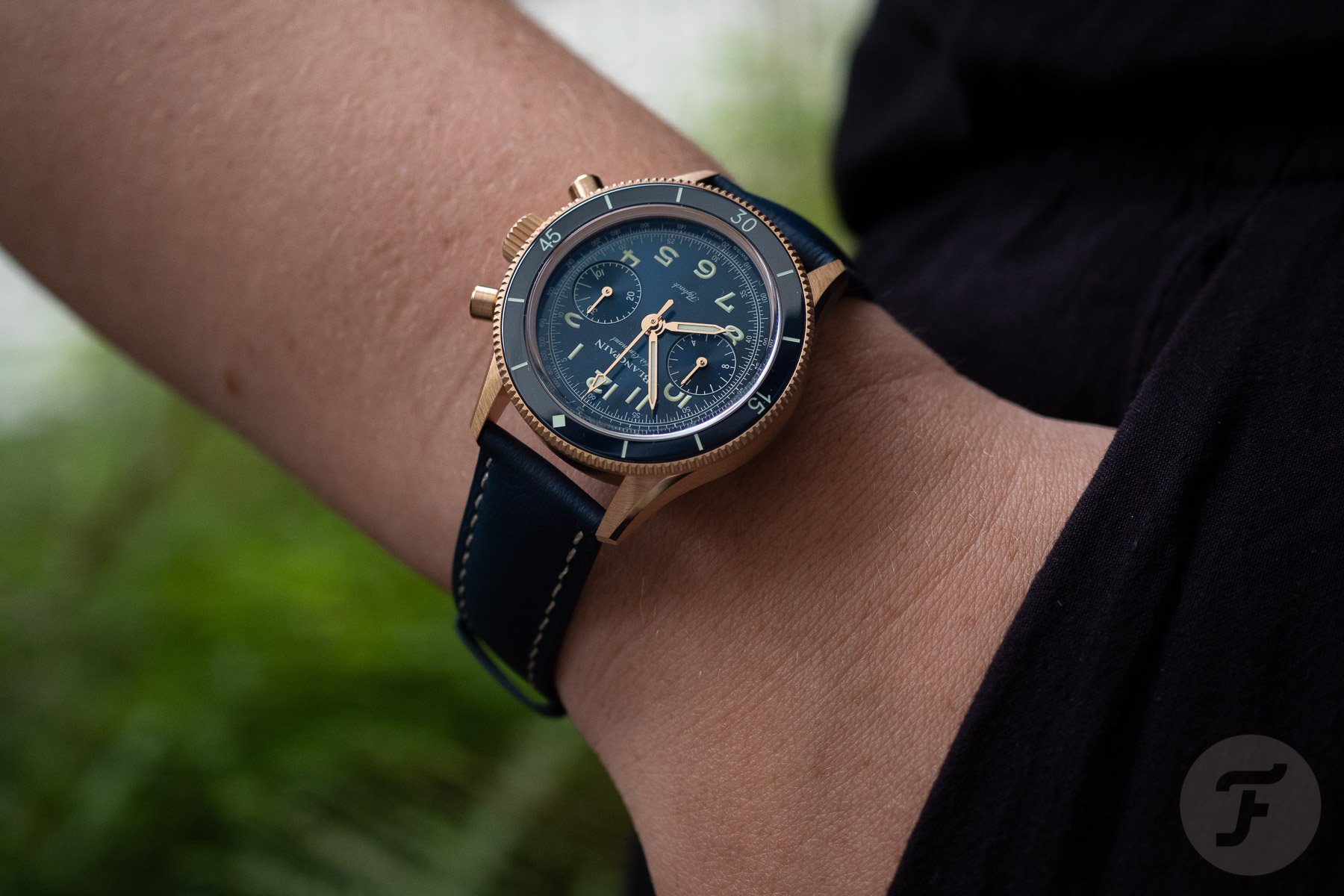 The Air Command 36.2mm is priced at €17,360 for the titanium version and €28,680 for the red gold version. Prices may vary depending on the strap fastening between a pin buckle or a folding clasp.