I did not see this one coming, but I’m happy it’s here
Balazs Ferenczi
comments 24
Share

I have a thing for vintage watches. Most of you who read my articles know that. Time-only or complicated, it does not matter to me. But, if I had to choose a favorite watch type, I’d go with chronographs. I have many different ones in my collection, but my favorite of the quirky ones is my vintage Certina Argonaut. So, you can imagine how excited I was when I heard the news that Certina is re-releasing the Argonaut. The new Certina DS Chronograph Automatic 1968 might not have the same name, but it has the looks.

My vintage Argonaut is on the one end of the spectrum. It’s the simplest and possibly the earliest version of the Argonauts. As such, it also has the first reference, 8401 001. The Argonaut Chrono 200M, upon which the DS Chronograph Automatic 1968 is based, is on the other end of said spectrum. 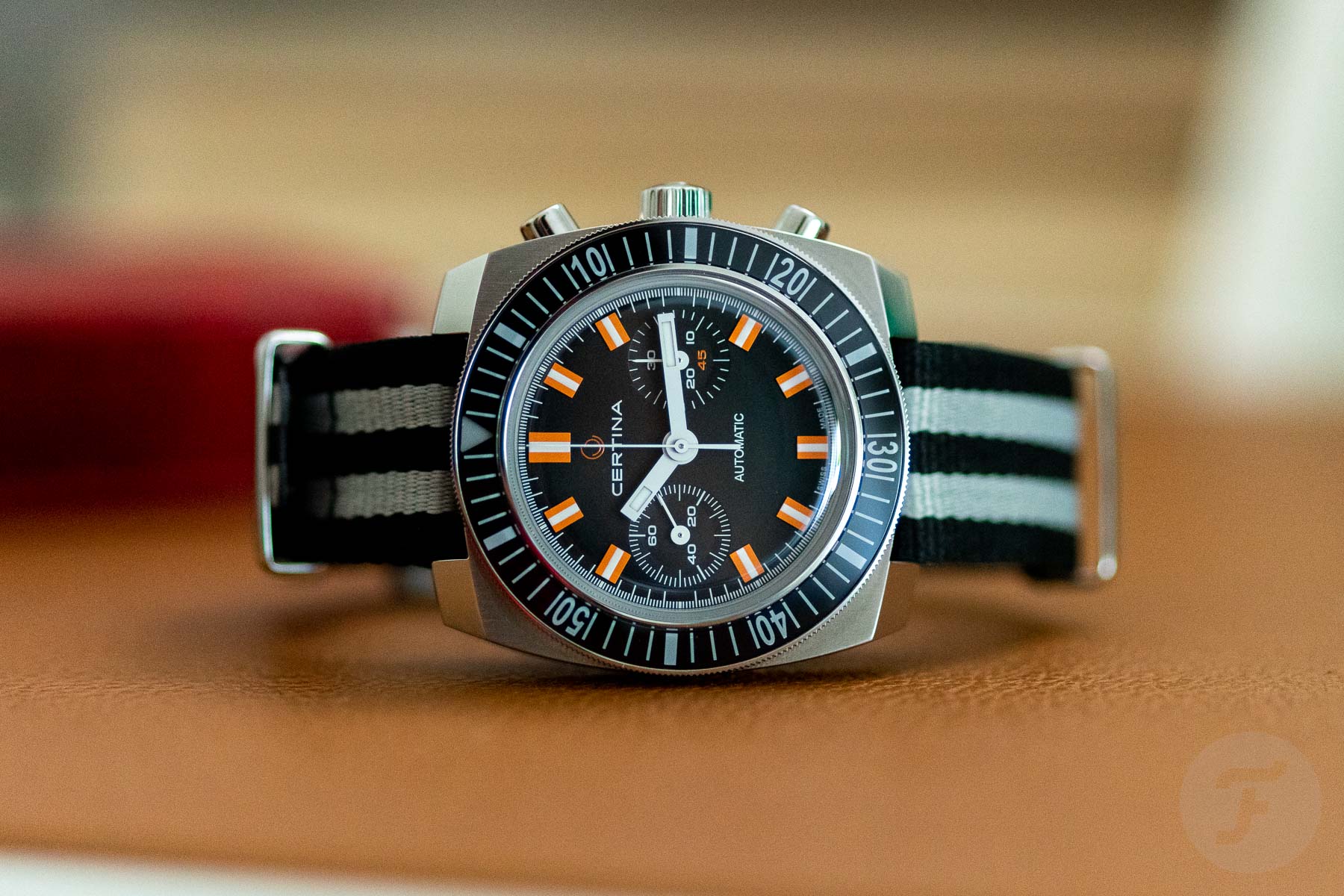 Before we jump into the hands-on review of the new Certina DS Chronograph Automatic 1968, let me bring you guys up to speed about the Argonaut. Over the years, Certina released eight versions of this model, strictly speaking. I say this because there were some other similar models, time-only versions, and so on. But when it comes to Argonaut chronographs, between mine and the Argonaut Chrono 200M, there are six different models. They all had either a Valjoux 23 caliber (for versions with two sub-dials) or a Valjoux 726 (for versions with three sub-dials). The case was identical too, measuring around 38 × 42mm with a 12mm thickness. The dial color was either black or white with no funky tones. Lastly, Certina made these Argonauts for a relatively short period. Production went on between 1968 and 1972. I guess you now know where the name of the new one comes from. 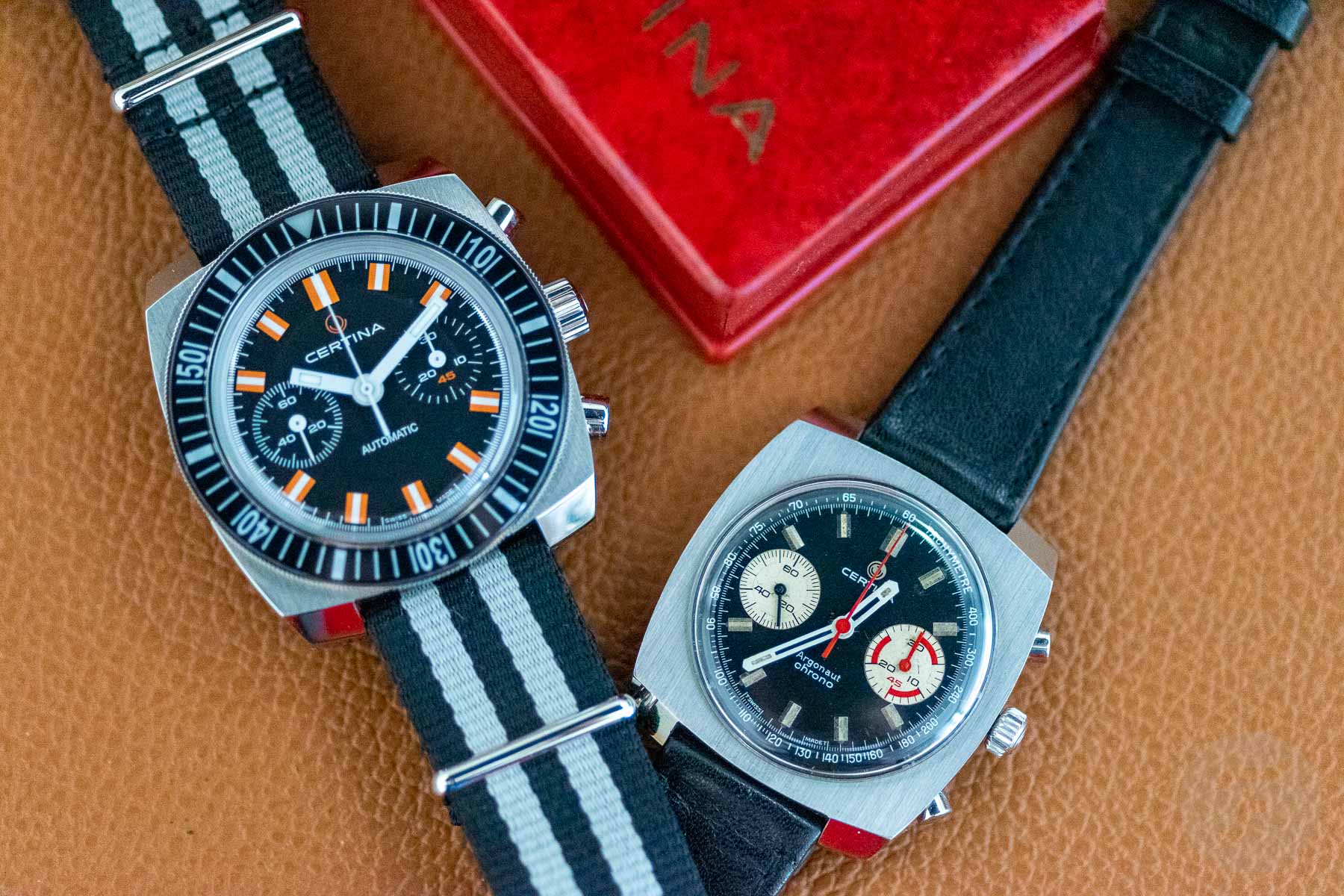 Brands with as long of a history as Certina probably have an easy job when it comes to re-editions. Its vintage catalog is vast, with decades and decades of models to choose from. I have to say, after seeing and testing both the Certina DS PH200M and the DS PH500M, it was time that the brand did something chronograph-related. Well, it did. The DS Chronograph Automatic was a charmer, but let’s be fair: Certina focused more on its vintage-diver catalog. Recently, however, the brand turned to the models that are popular on the vintage market, even if they’re a bit nonconformist by today’s standards. Certina reissued its iconic time-only DS line, and then the DS Chronograph Automatic 1968 dropped. I’m sure there are other iconic chronographs in Certina’s archives, but the folks behind the brand picked this one. Kudos to whoever came up with the idea, as the watch takes inspiration from the rarest Argonauts of them all. 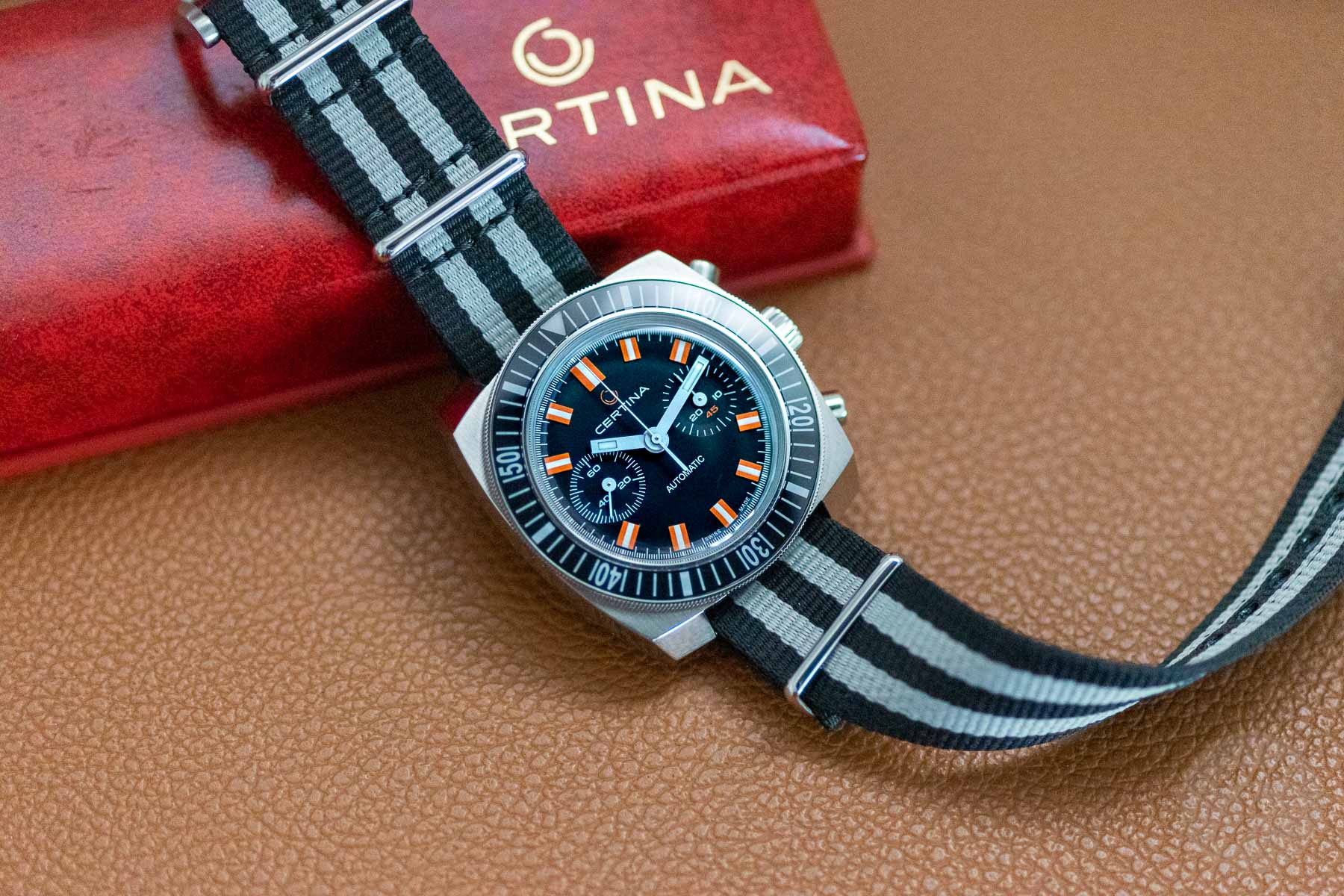 Sadly, I have never owned an original Certina Argonaut Chrono 200M (ref. 8401 002), so I can only work from pictures here. I know that Certina owns a vintage version of this excellent timepiece. Perhaps the designers used that to model this new piece? I understand that the DS Chronograph Automatic 1968 is as close to the original in looks as it gets. Sadly, this is where it stops. Everything else, from the size to the movement and certain case elements are all, for the lack of better wording, tailored for the modern watch lover. Or so Certina thinks. 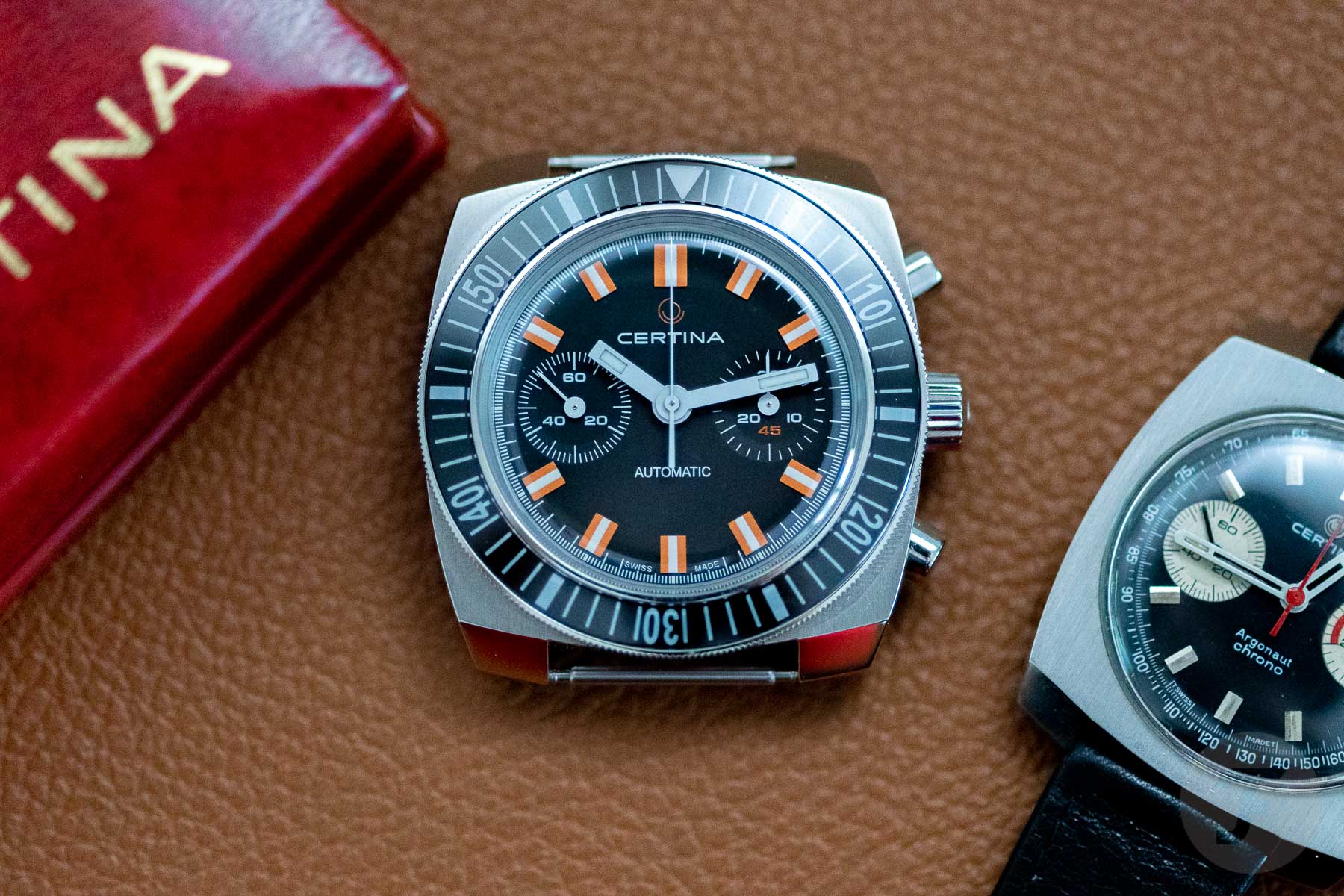 But before I go and dissect the poor thing, let me make one thing clear: I adore the piece. All I’m trying to do here is point out the differences between vintage and new. Hopefully, this will serve as somewhat of a checklist. By the end, you’ll know everything you want about the DS Chronograph 1968. As a matter of fact, you’ll also be reasonably knowledgeable about the vintage Argonaut 200M. 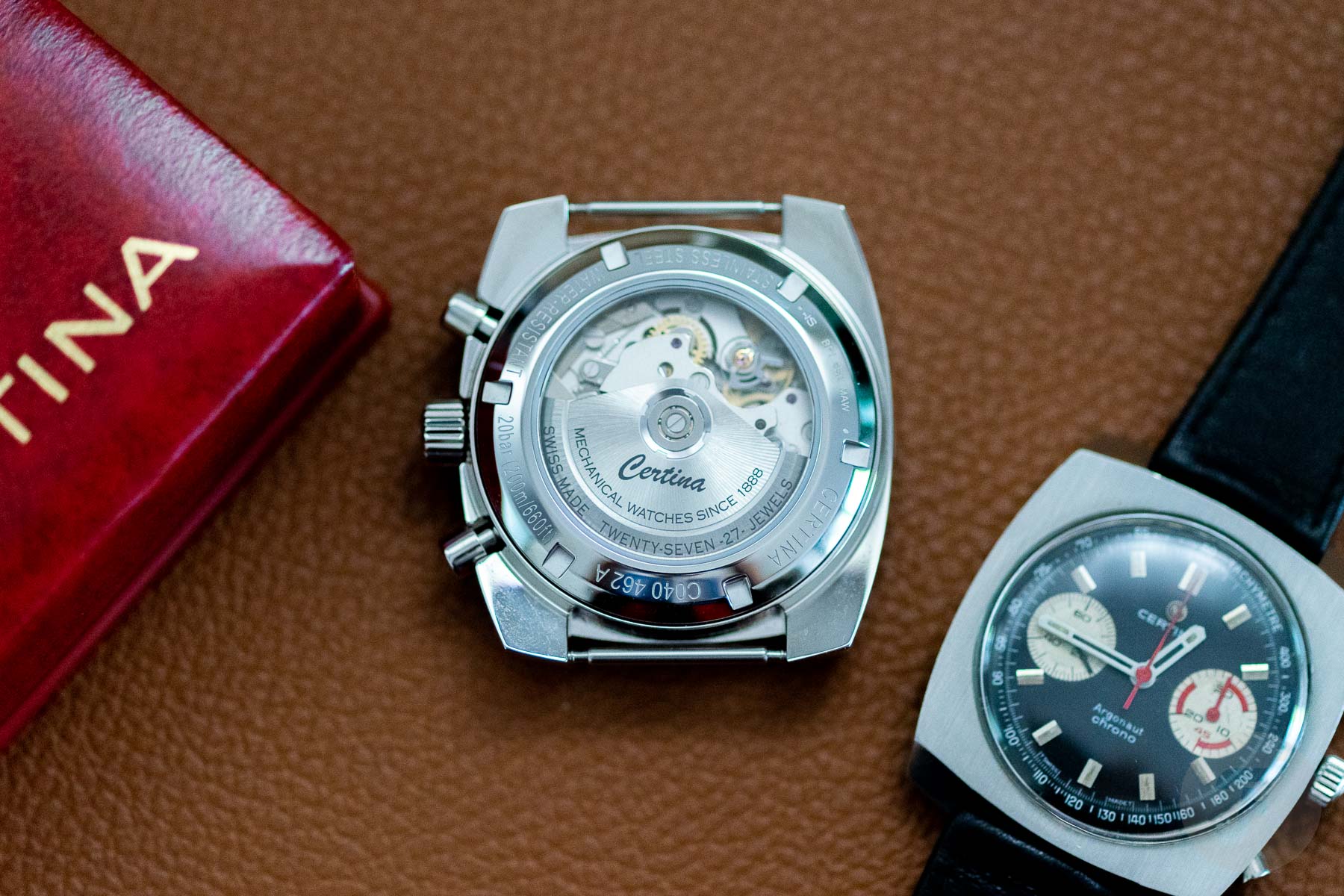 I know it’s very highly unlikely that a Swatch Group re-edition will stay close to the original model in size. The Group caters to a much larger audience than a microbrand like Nivada does. Nivada is known for creating timepieces that are the spitting image of their vintage counterparts. The masses, however, want larger watches. So, when I took the new Certina DS Chronograph Automatic 1968 out of the box, I expected a larger watch. The vintage Argonaut is around 38mm, but the new one is a whopping 43.6mm. Quite the growth if you ask me. Now, I must mention that while the watch is significantly larger than before, the proportions are pretty much the same. The case shape, the brushed/polished surfaces, and even the crown with the logo are identical. The new model differs in its thickness, and there’s a reason for that: it’s an automatic. 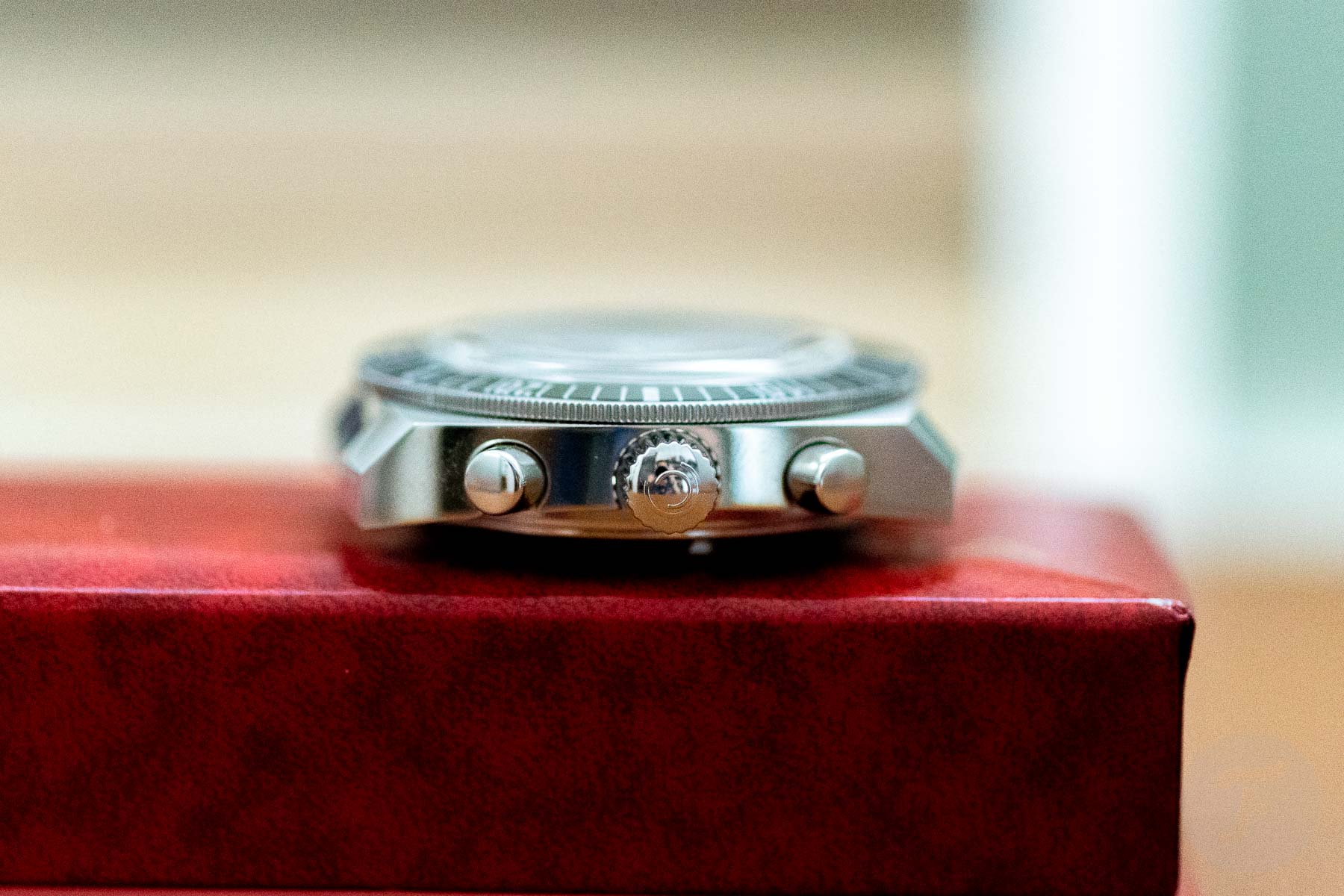 The vintage Argonaut had a Valjoux 23 movement inside. This iconic movement was not only a favorite of many illustrious brands but was also a manual-winding, super-slim caliber. The overall thickness of the Argonaut Chrono was just 11.8mm. On the other hand, due to its automatic caliber, the new DS Chronograph Automatic 1968 is over 15mm thick. Inside the watch beats the ETA A05.H31, which is technically an adapted version of the  Valjoux 7753. So, in this case, the new model also uses a Valjoux caliber but a very different one. This movement has 27 jewels, a 4Hz frequency, and a power reserve of 60 hours. Usually, the movement offers a date complication, but thank God this is “missing” from this Certina. Praise be to whoever decided not to have it on the watch. 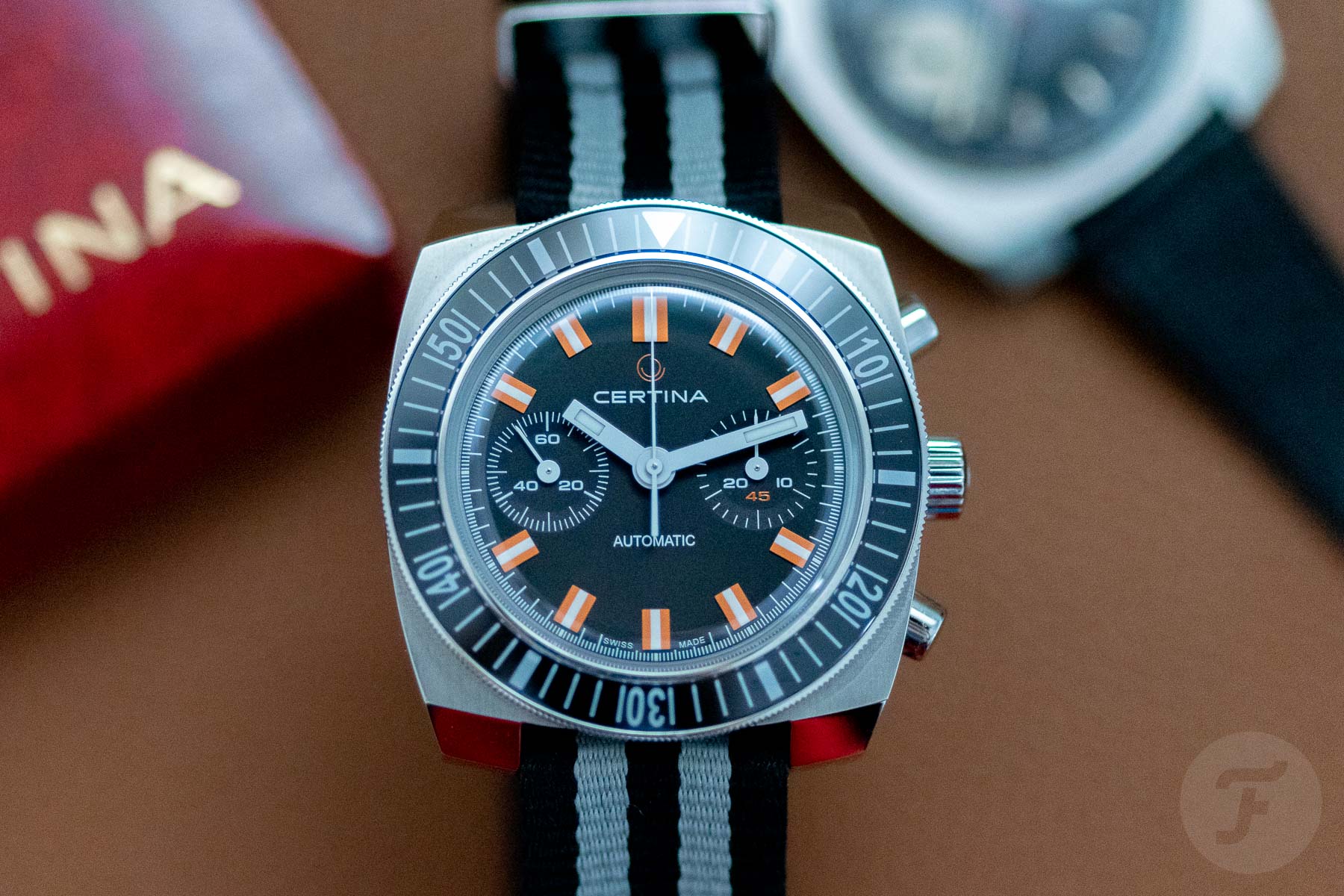 Despite its size, the DS Chronograph Automatic 1968 wears great on the wrist. I think it might be a bit top-heavy, but this is due to the NATO strap, which does not give as much support as a rubber strap or a bracelet. The NATO also adds to the bulky overall feel. It would likely wear thinner on a two-piece strap, especially since the watch has a display case back. Why would I wear it on a NATO when I could have it on a two-piece and enjoy the view of the automatic movement? Mind you, the other available version comes on a leather strap (more about this below).

The dial design, however, is both true to the original and highly legible. A dark dial, contracting orange indexes, and broad white hands help you clearly read the time and the chronograph. 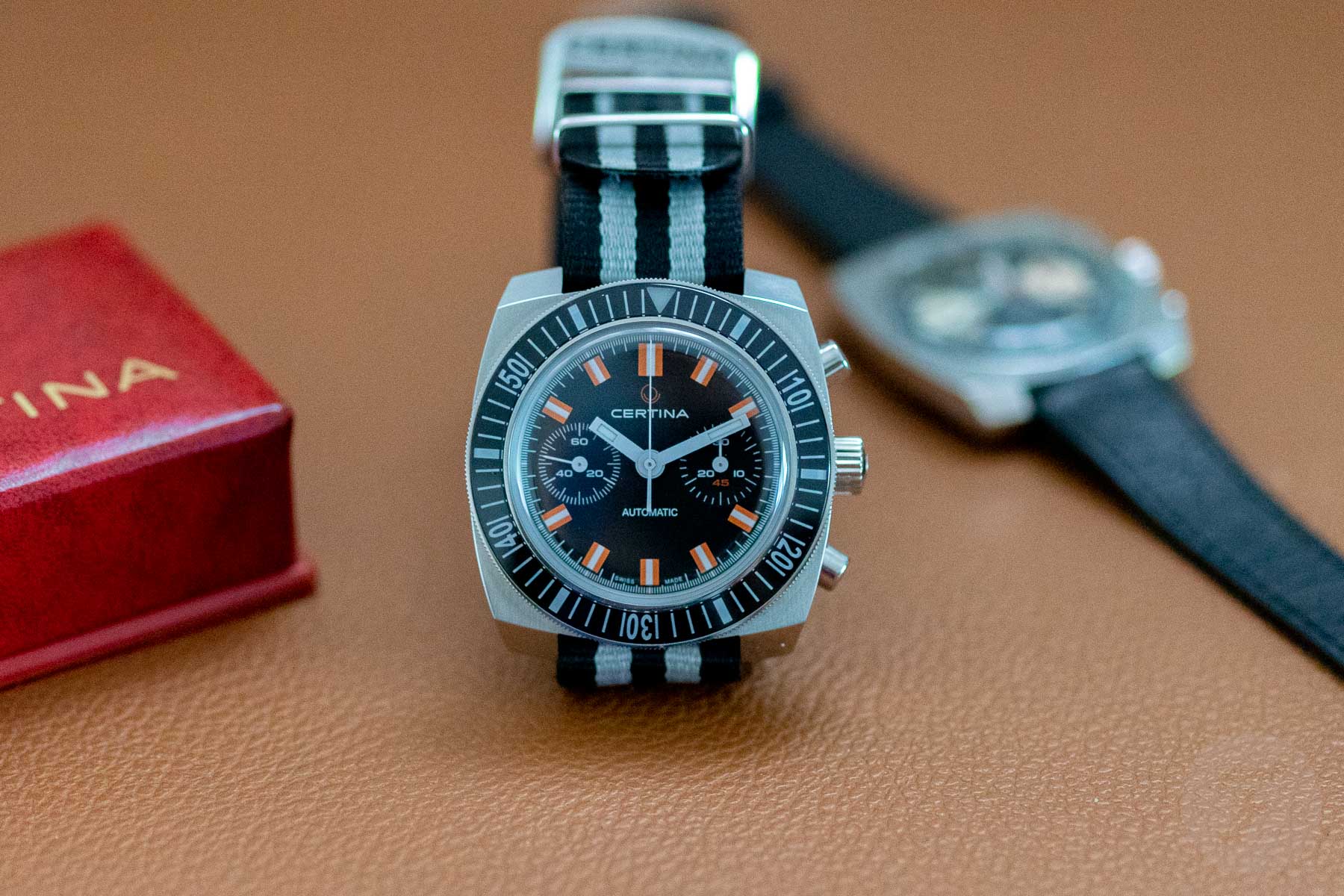 Certina released two versions of the DS Chronograph Automatic 1968. There’s the steel one that I talked about in this article as well as a PVD-coated version, which is a new design. Whether you fancy the steel or the PVD, the price points hovers around €2K. For the steel version, you’ll pay €1,990 (CHF 1,930). The PVD version is a bit more at €2,040 (CHF 1,970), which is still not too bad or much more. I love the vintage vibe, so I’d pick the steel version. However, if you are into black watches that are a tad eccentric, the PVD DS Chronograph Automatic 1968 could be a model to consider. In any case, make sure you visit Certina’s website and check them both out.

Let us know what you think of this release in the comments. And if there any other vintage Certina models that you feel deserve a reissue, let’s hear those too!