As you know, we love our G-Shocks here at Fratello. Most of the team members have a strong preference for the classic square models, and I am no exception to that. But I also love the wilder side of Casio’s G-Shock universe. The brand’s MT-G line, in particular, has seen some releases that I absolutely adore. That’s why I was curious to learn more about the new G-Shock MTG-B3000 series. The watches in this series come equipped with a new module that slims down the watches significantly. It makes the new MTG-B3000 line a great follow-up to the MTG-B2000 series. Time to find out more.

The first memory of the G-Shock MT-G that comes to mind is the glorious MTG-B2000PH2A “Blue Phoenix” that I had the pleasure of reviewing last year. The colorful beast was an absolute joy to witness up close. As it happens, the new MTG-B3000 is the follow-up to that series in which we have seen many wonderfully crazy releases. For the new MTG-B3000 line, G-Shock starts quietly with several less colorful models than the “Blue Phoenix” that I reviewed or the “Rainbow Mountain” that Lex reviewed. But what the new MTG-B3000-1A2ER and the MTG-B3000D-1A lack in spectacular colors, they make up for in technological development. 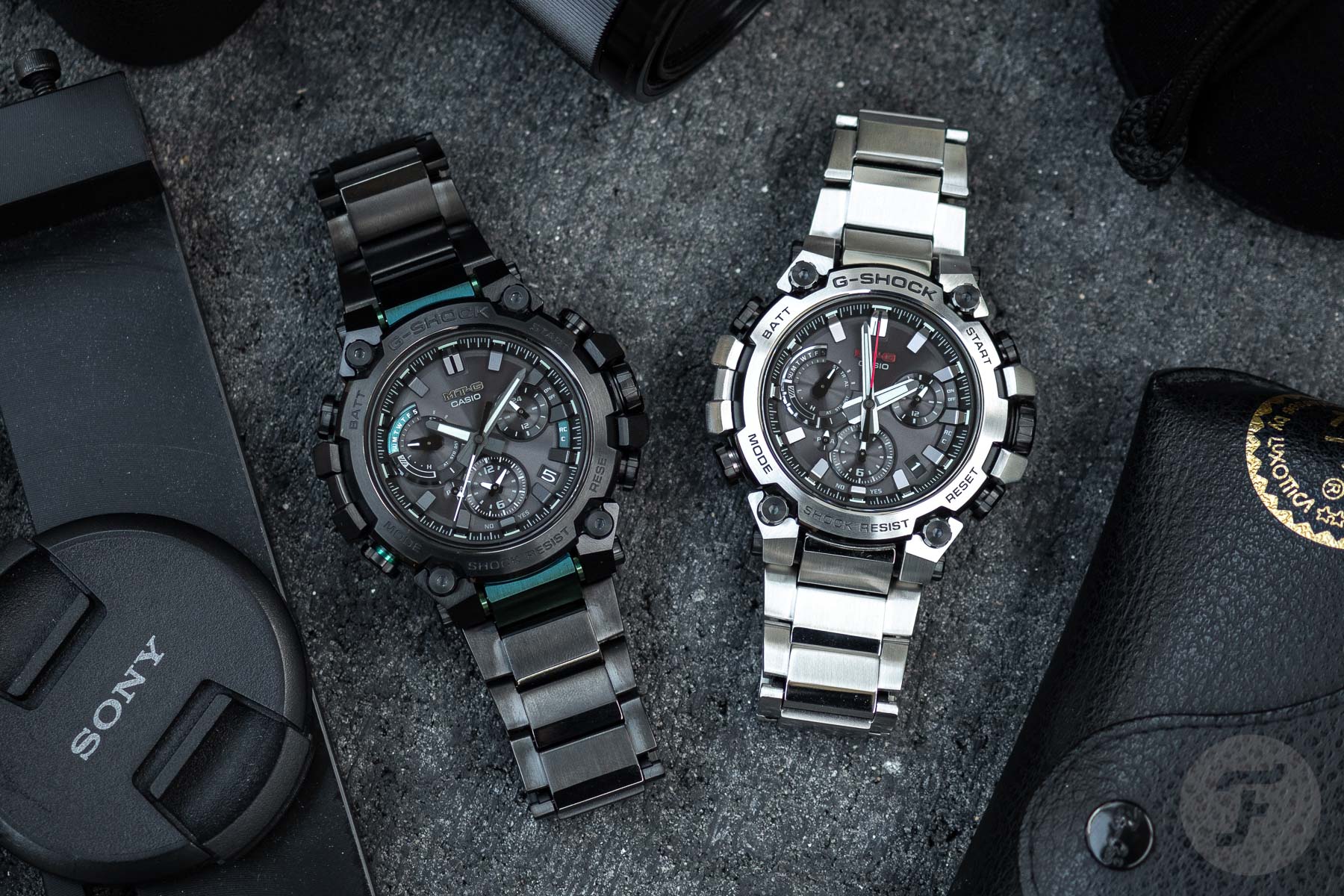 The details of the new G-Shock MTG-B3000 series

The new MTG-B3000 series is produced in Casio’s famous Yamagata Factory, which only produces the brand’s high-end products. For G-Shock, these are the MR-G line and the MT-G line that this new series is a part of. For those who don’t know, MT-G stands for Metal Twisted G-Shocks. The collection has been around for more than two decades and is characterized by the use of steel cases infused with resin. It has changed the brand’s use of materials and has also upped the overall quality of G-Shock watches. 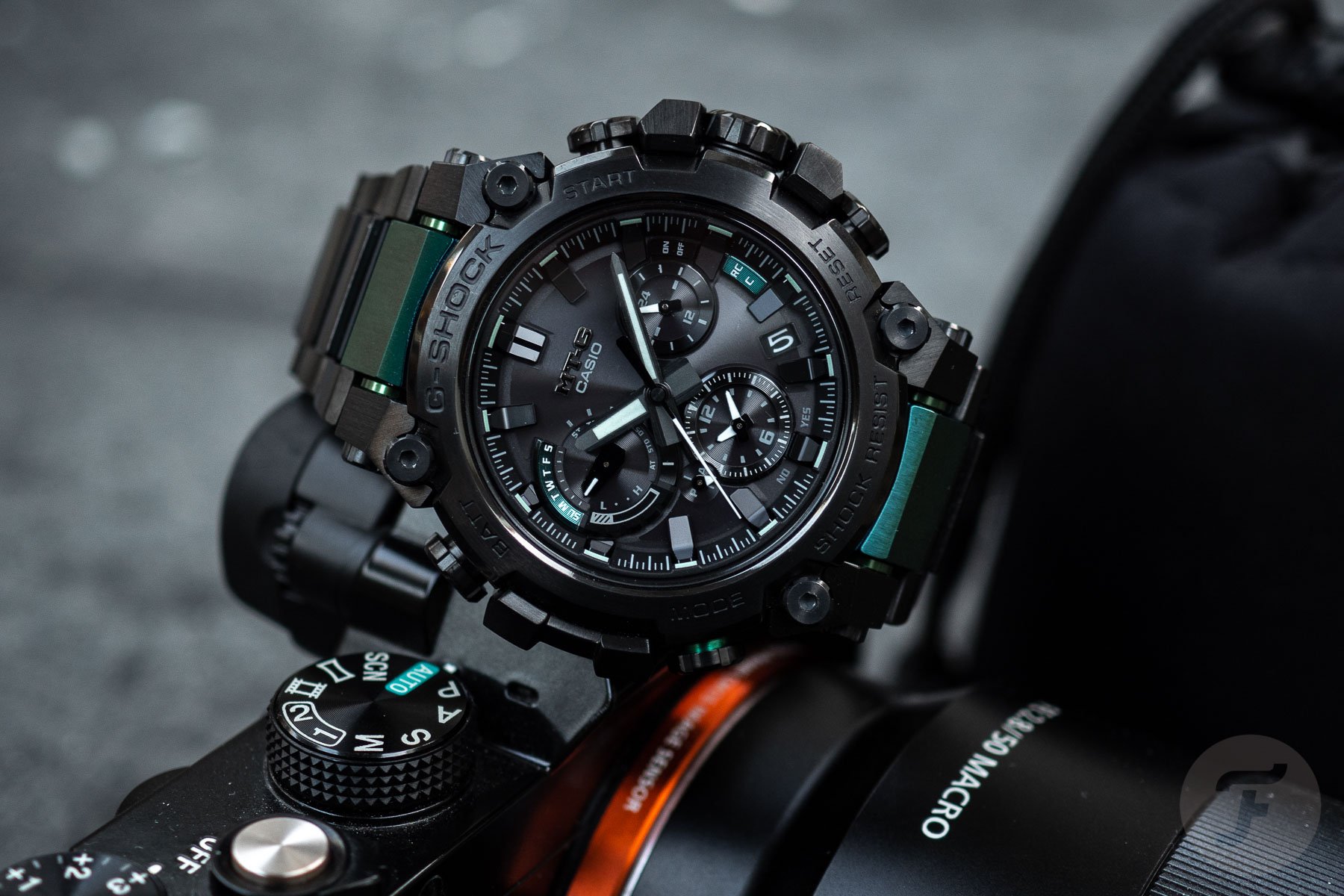 The new MTG-B3000 follows that tradition of hybrid cases with a case in metal, resin, and carbon. The newly designed case measures a substantial 50.9mm wide, 51.9mm long, and 12.1mm thick. Overall the case is slightly smaller than the case of the B2000 series. But what stands out most is the substantially slimmer profile of the watches. In comparison, the MTG-B2000 series with the “Blue Phoenix” and “Rainbow Mountain” has a case measuring 15.9mm thick. That means this new case is almost 3mm thinner. As you will understand, it makes the new G-Shocks much more comfortable on the wrist. 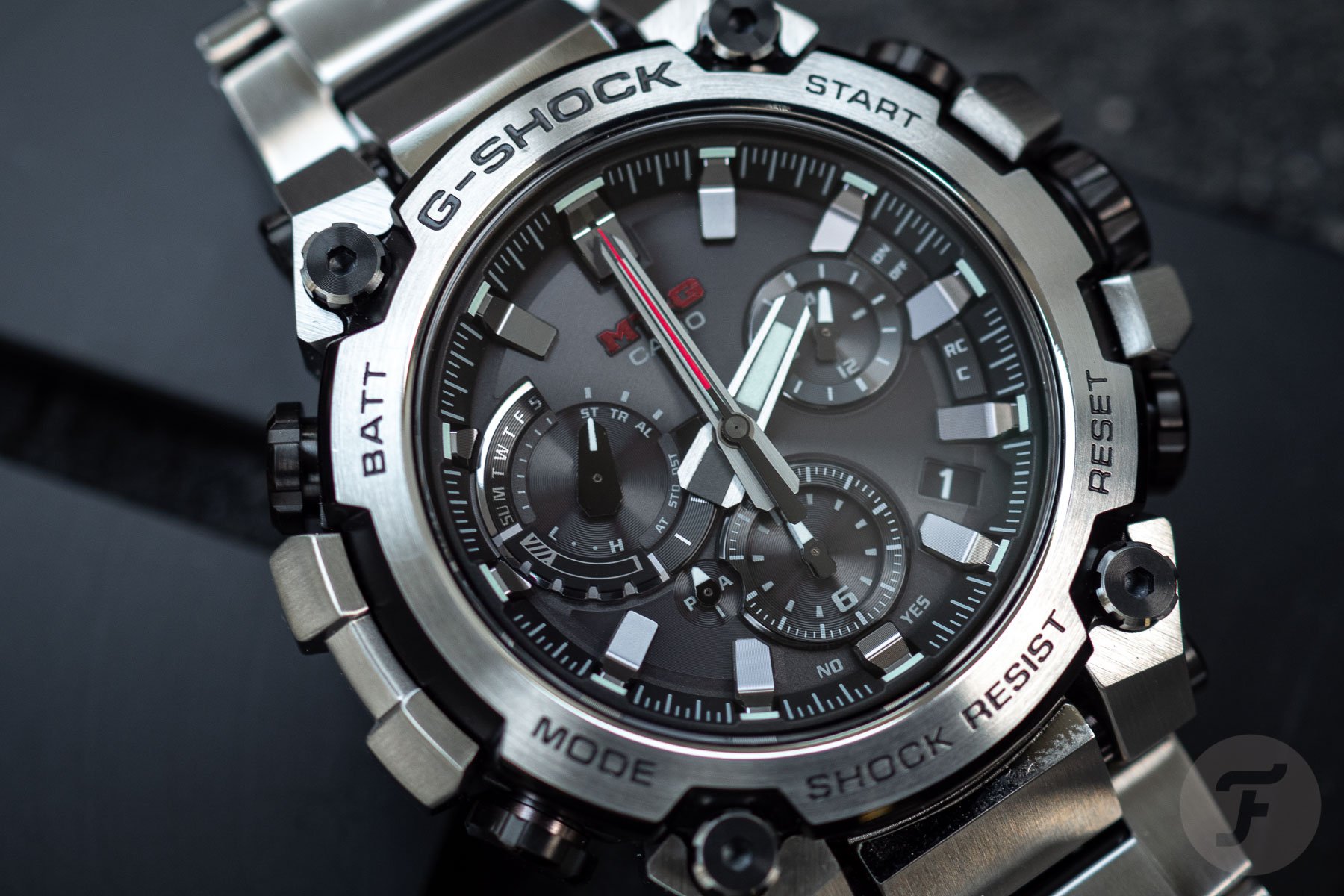 What has stayed, of course, is the remarkable toughness with incredible shock resistance and water resistance to 200 meters. The reduction in height was made possible thanks to the new Casio 5672 module that powers the watch. The Tough Solar module features long-range radio control for greater accuracy and reliability as well as Bluetooth connectivity for linking it to your smartphone. 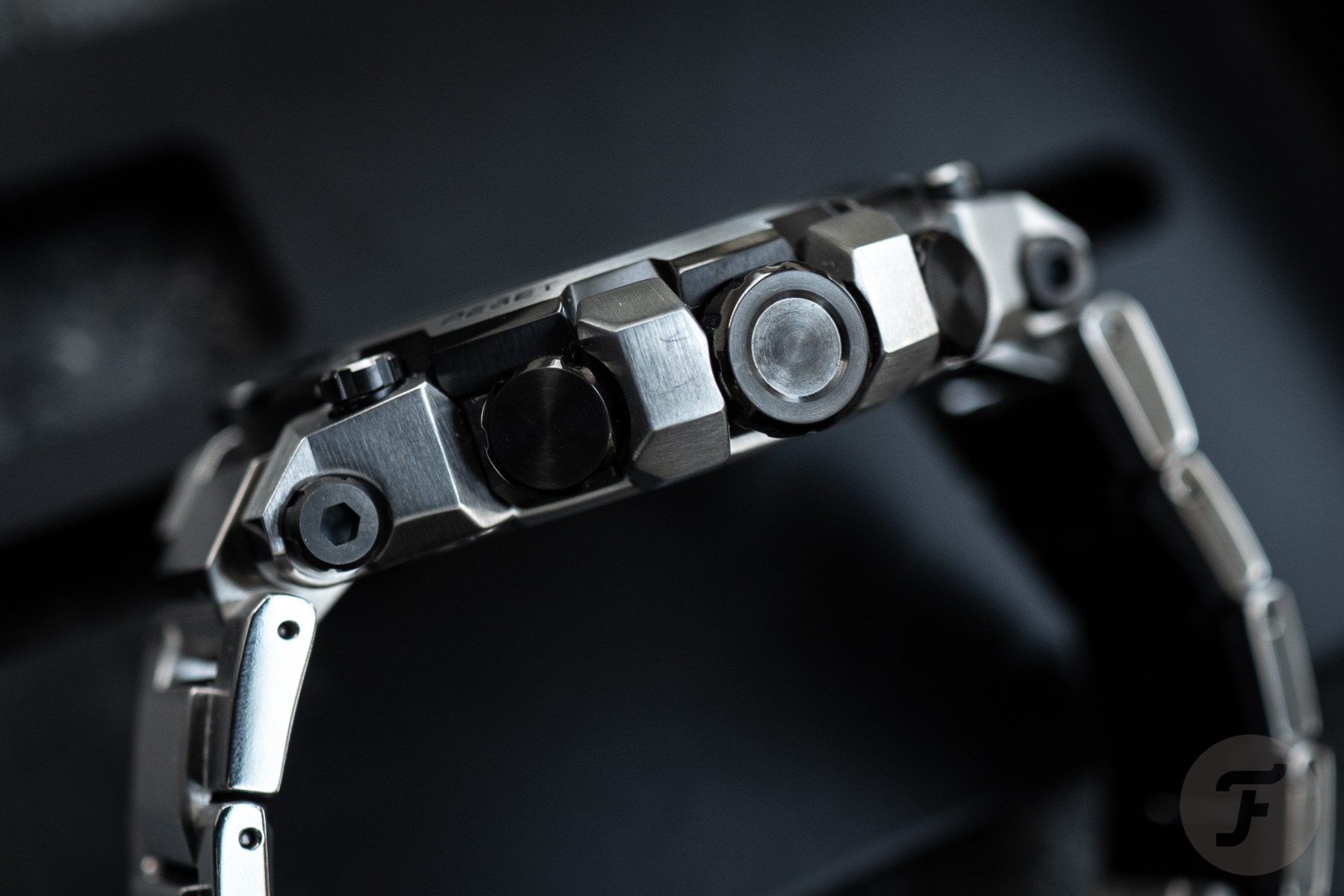 In designing the new module, the Casio engineers also returned to a more classical 3-6-9 chronograph layout. The earlier MTG-B2000 series has a more complex layout that is less intuitive to read. But while the new B3000 models still combine multiple functions in a single sub-dial, the watches feel more like traditional chronographs than their predecessors. It makes reading the different functions feel simpler and more logical. 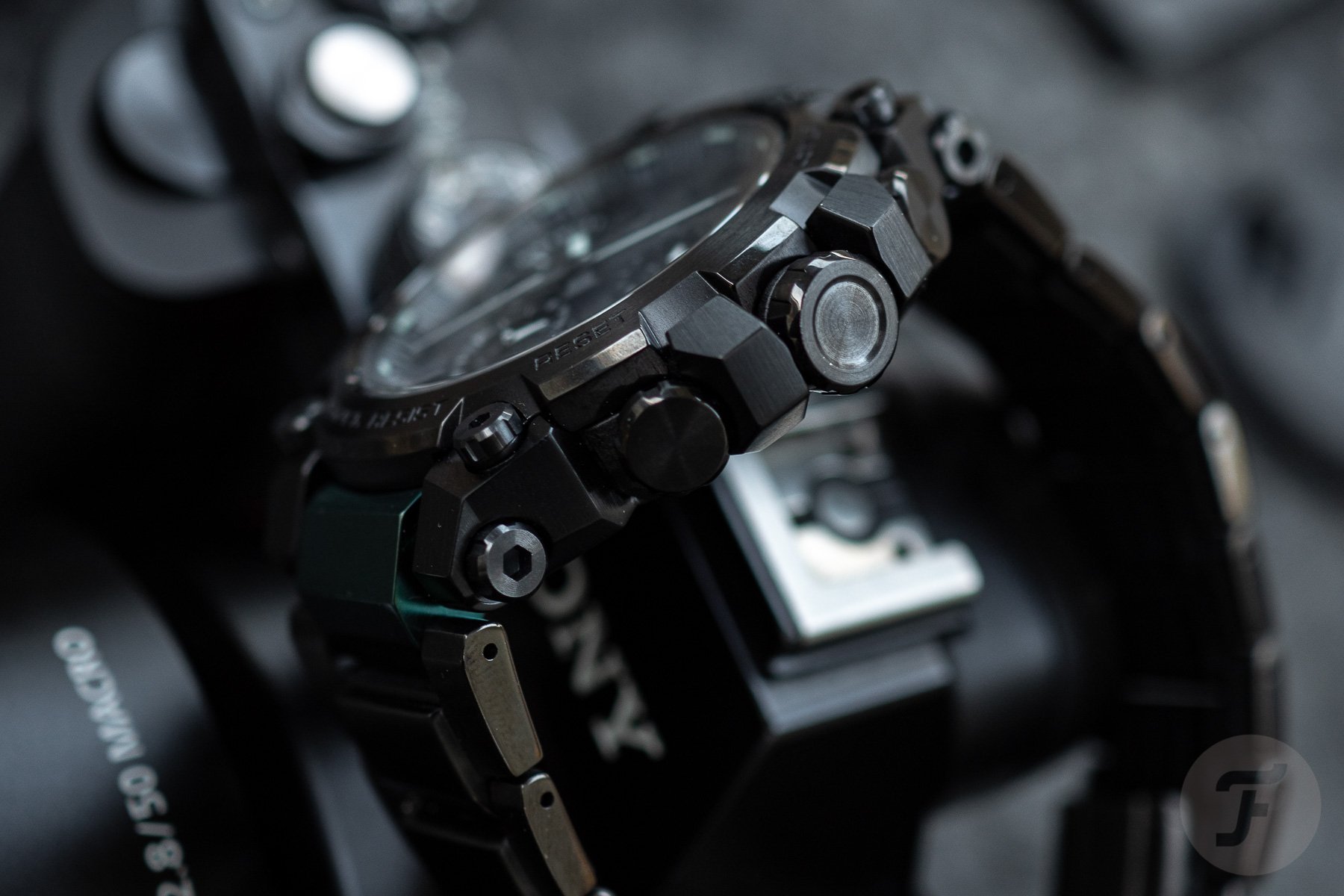 A plethora of different functions

The MTG-B3000 has the same wide array of functions as its predecessors. The watch features a dual-time function with 27 different time zones, a countdown timer, chronograph functions, multiple alarms, and a full calendar up to 2099. It also features an energy-saving mode that stops the hands from running when the watch is left in the dark. 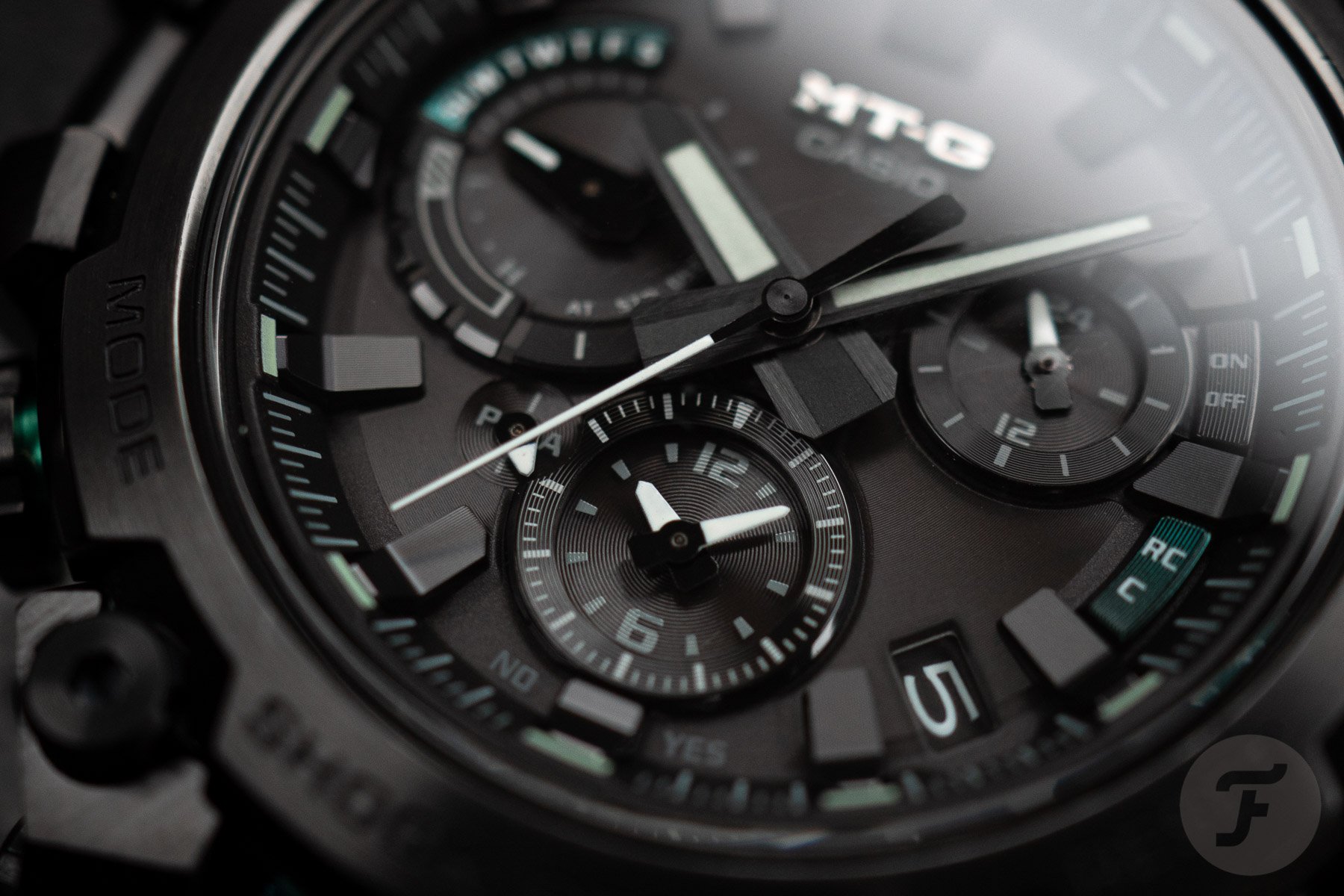 Thanks to Bluetooth connectivity, you can link the watch with your G-Shock app, and it will automatically sync upon arrival in a new time zone. Additionally, the app offers another set of functions, making it easy to adjust and use the watch wherever you are in the world. Regarding the new module’s accuracy, you can expect it to run within ±15 seconds per month. So overall, the new module offers the same great set of functionalities that we know from other G-Shock watches. 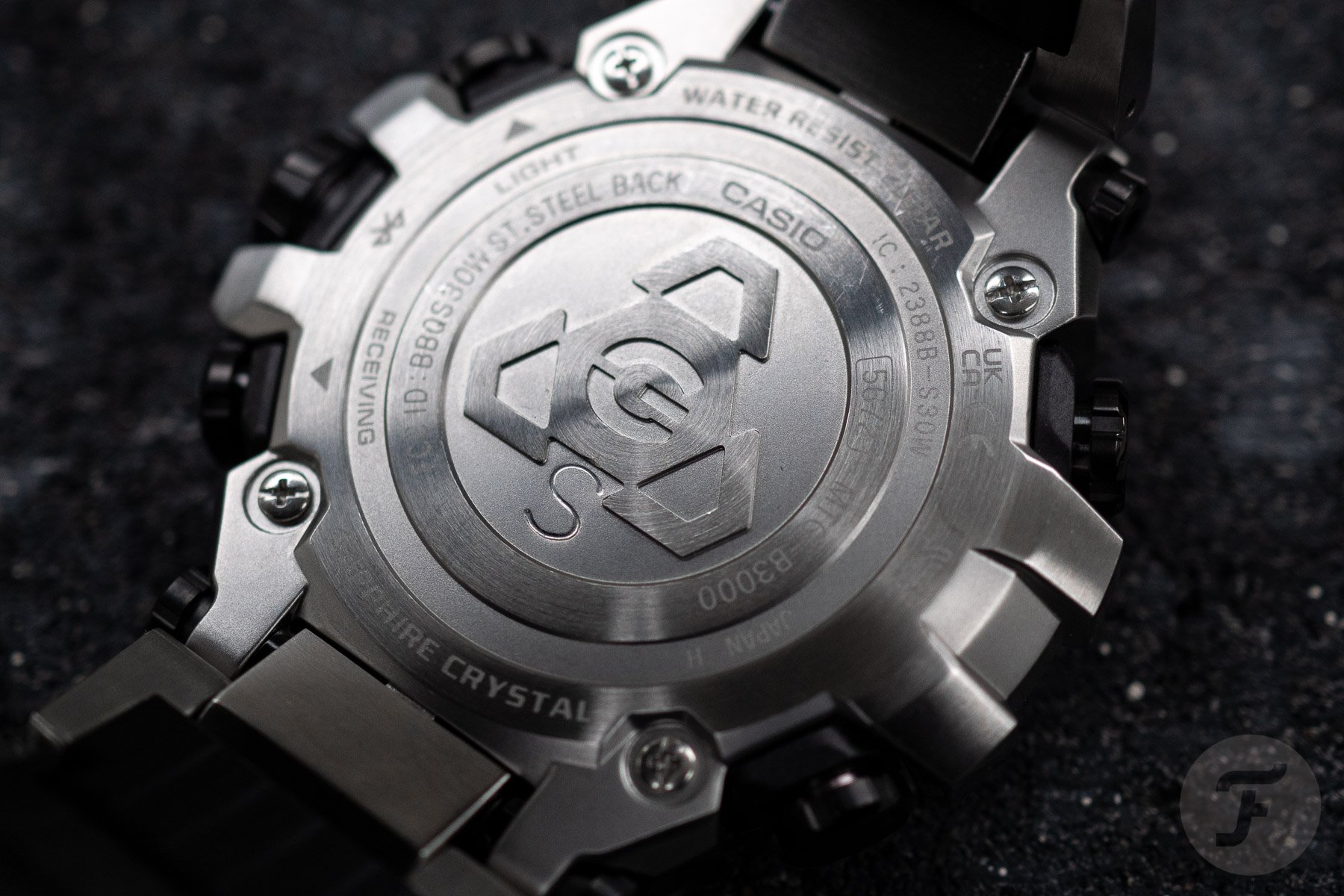 The new case design of the G-Shock MTG-B3000

With the new module as a starting point, the G-Shock designers created a case that embodies the recognizable G-Shock style but also has some smart design elements that made it possible to shave off almost 3mm compared to its predecessor. The most remarkable of them is the newly designed 3D case back that also forms the crown guard and button guards. It’s an ingenious piece of design and engineering. 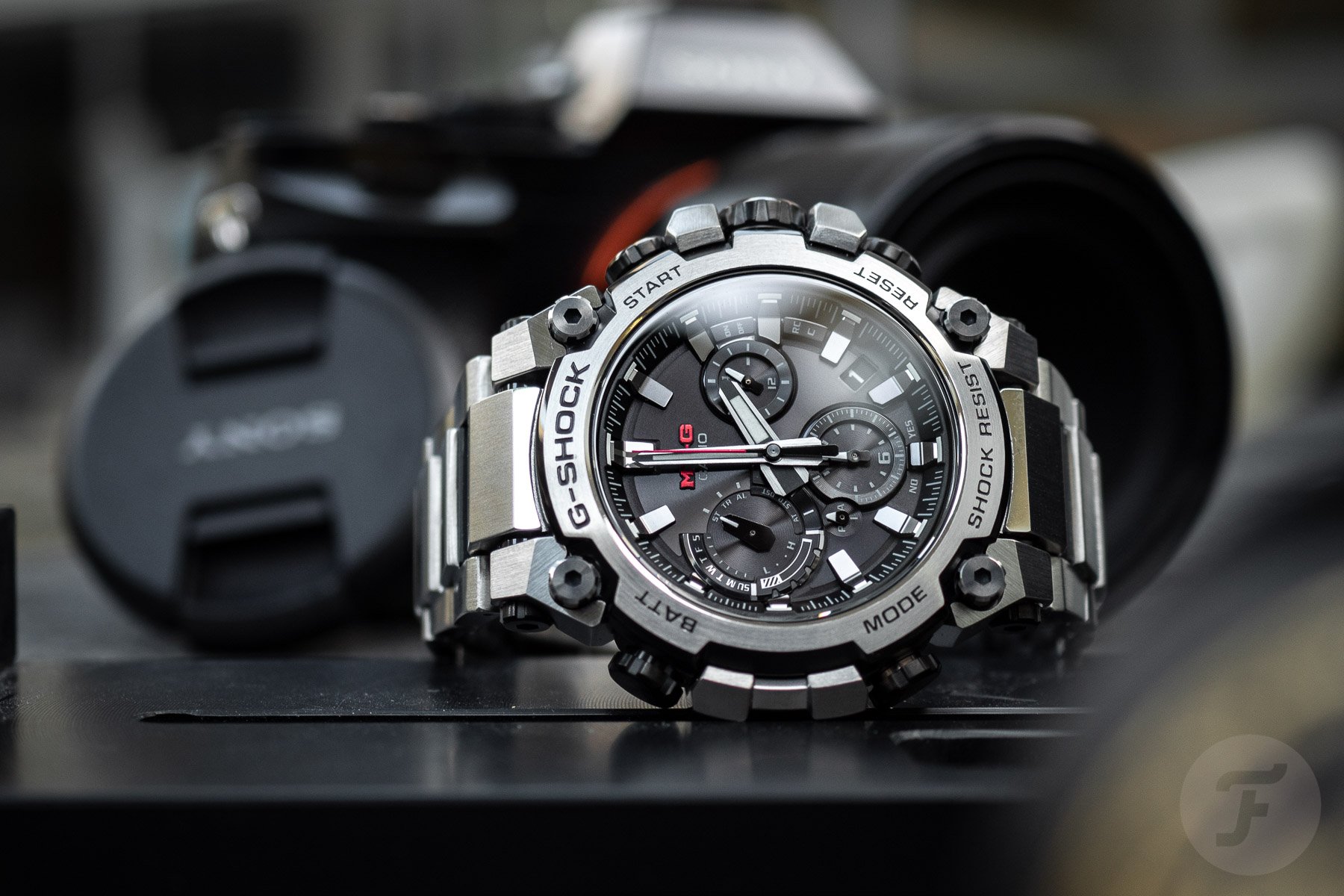 Additionally, the newly designed bezel with its four big screws is another standout design element that is both functional and gives the design its industrial character. Lastly, the bracelet has also been updated. It is made from a combination of lightweight resin and stainless steel and comes equipped with a folding pushbutton clasp. The clasp features urethane pads to prevent scratches from forming as a result of daily use. Lastly, the bracelet is now very easy to remove thanks to the new two-button quick-release system. It makes it easier to switch between the bracelet and any of the brilliant, integrated rubber straps that G-Shock offers for the MT-G models. 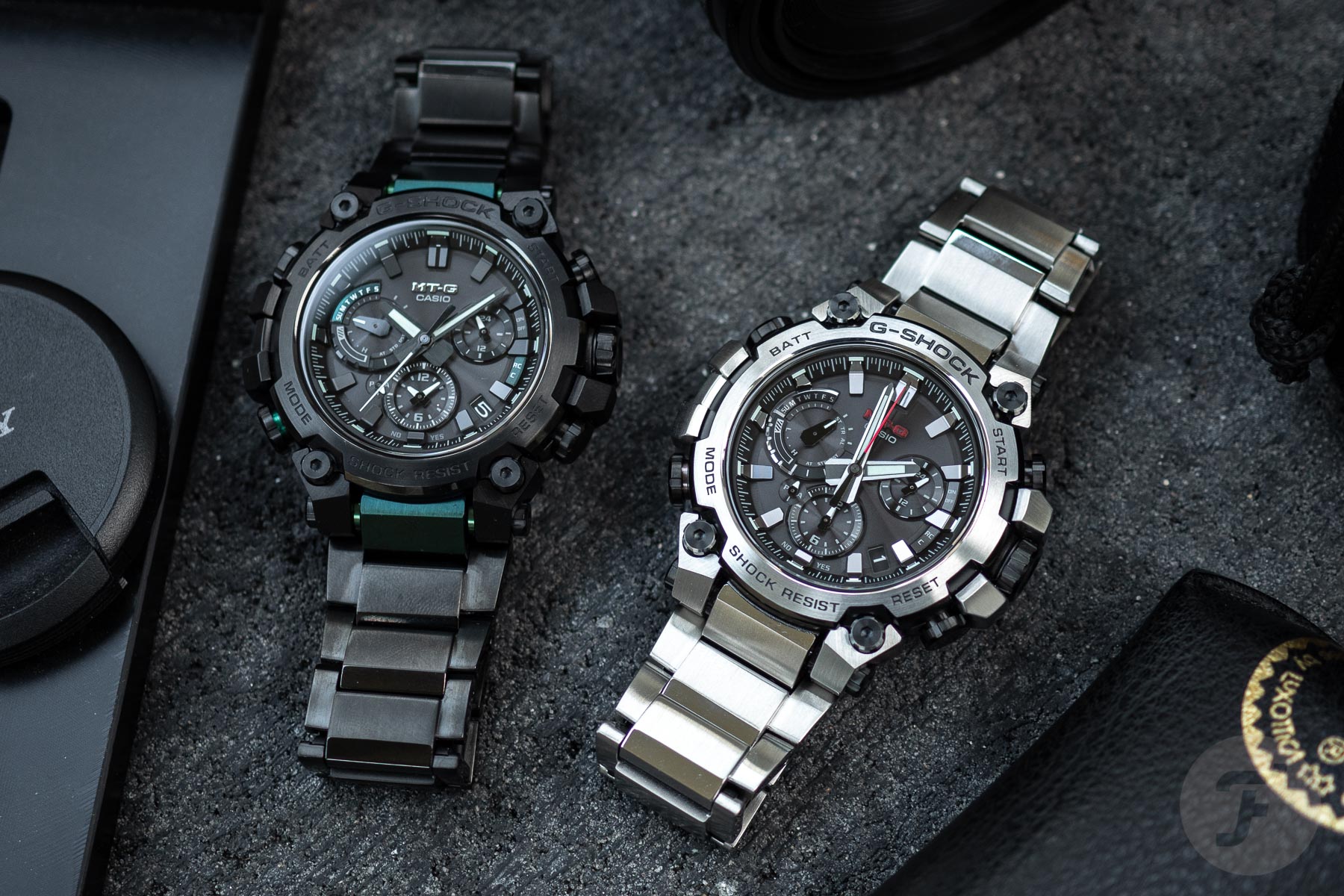 The bracelet is also a nice segue into the two watches that we had in for review. The first was the black MTG-B3000-1A2ER with its green ion-plated (IP) end link. This model was part of the first series introduced this year. The second model is the MTG-B3000D-1A with its stainless steel bezel and largely stainless steel bracelet. It gives off a slightly more traditional feel, although, with G-Shock, that is always a bad word to choose. The watch is hardly traditional, but you understand what I mean. 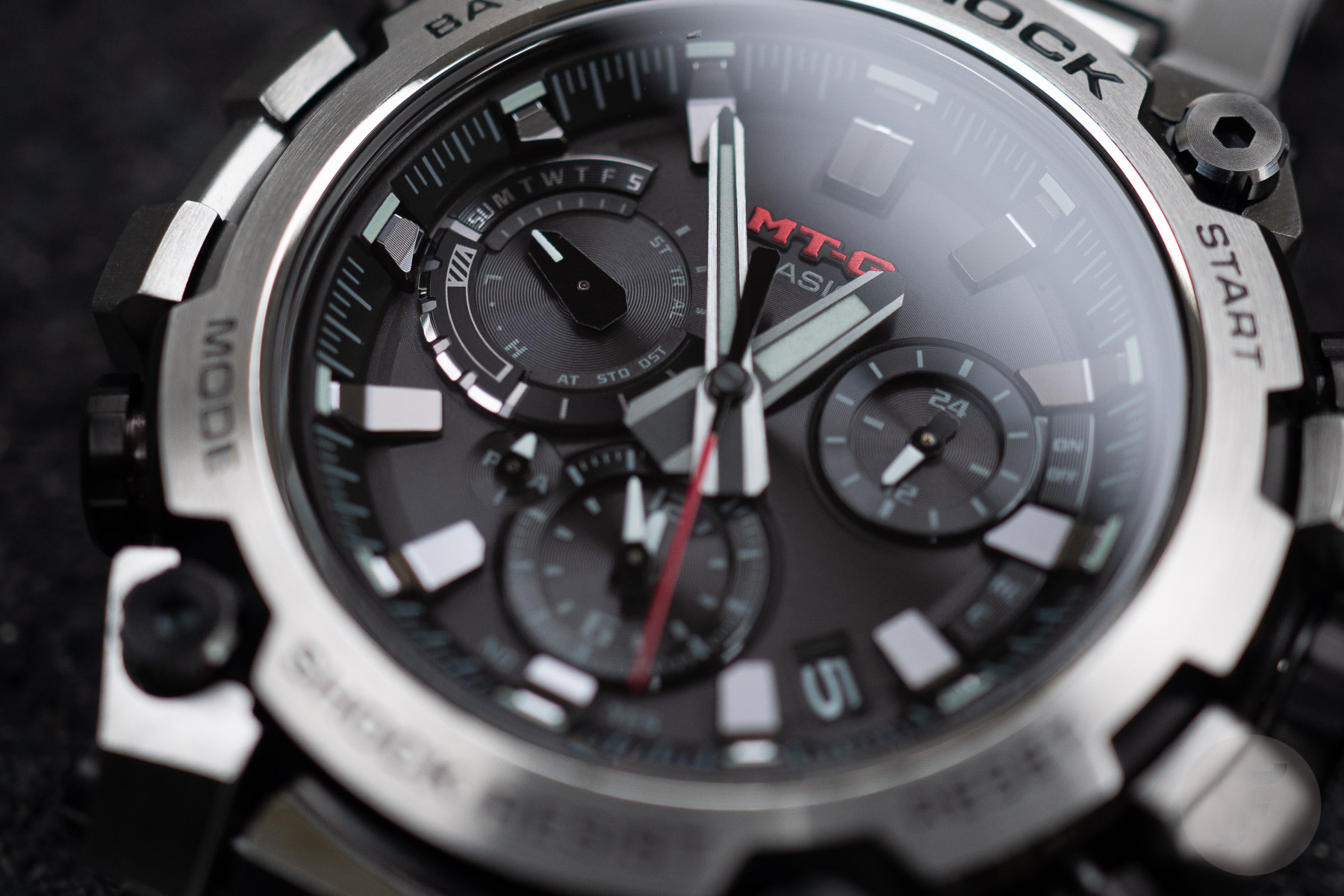 What immediately stands out is the incredible level of quality and detail. These watches feel solid and really well made. When it comes to looks, I preferred the black MTG-B3000-1A2ER, so that is the one I wore more out of the two. But I can say that both have the same weight of 148 grams and wear exactly the same. It’s merely a preference for the overall looks and presence that made the difference. 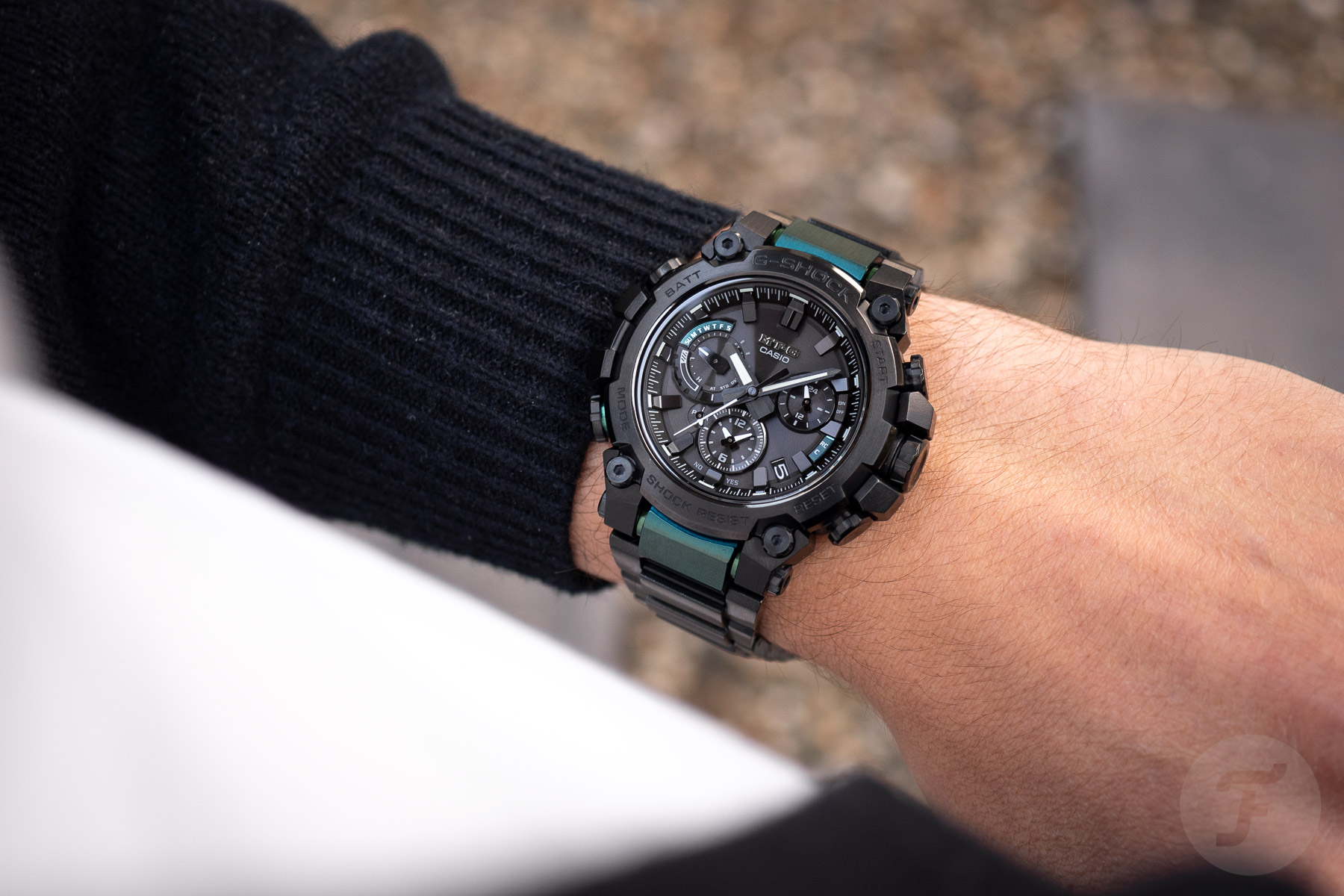 On the wrist, the watches are worlds apart from the MTG-B2000 models for multiple reasons. First off, the watches are slightly smaller. Secondly, the slimmer profile makes them a lot easier to wear. As we all know, a nearly 3mm difference in thickness is huge for overall comfort. And another thing that I was impressed by is the new bracelet. It drops straight down at the lugs, so it really wraps itself around the wrist nicely. 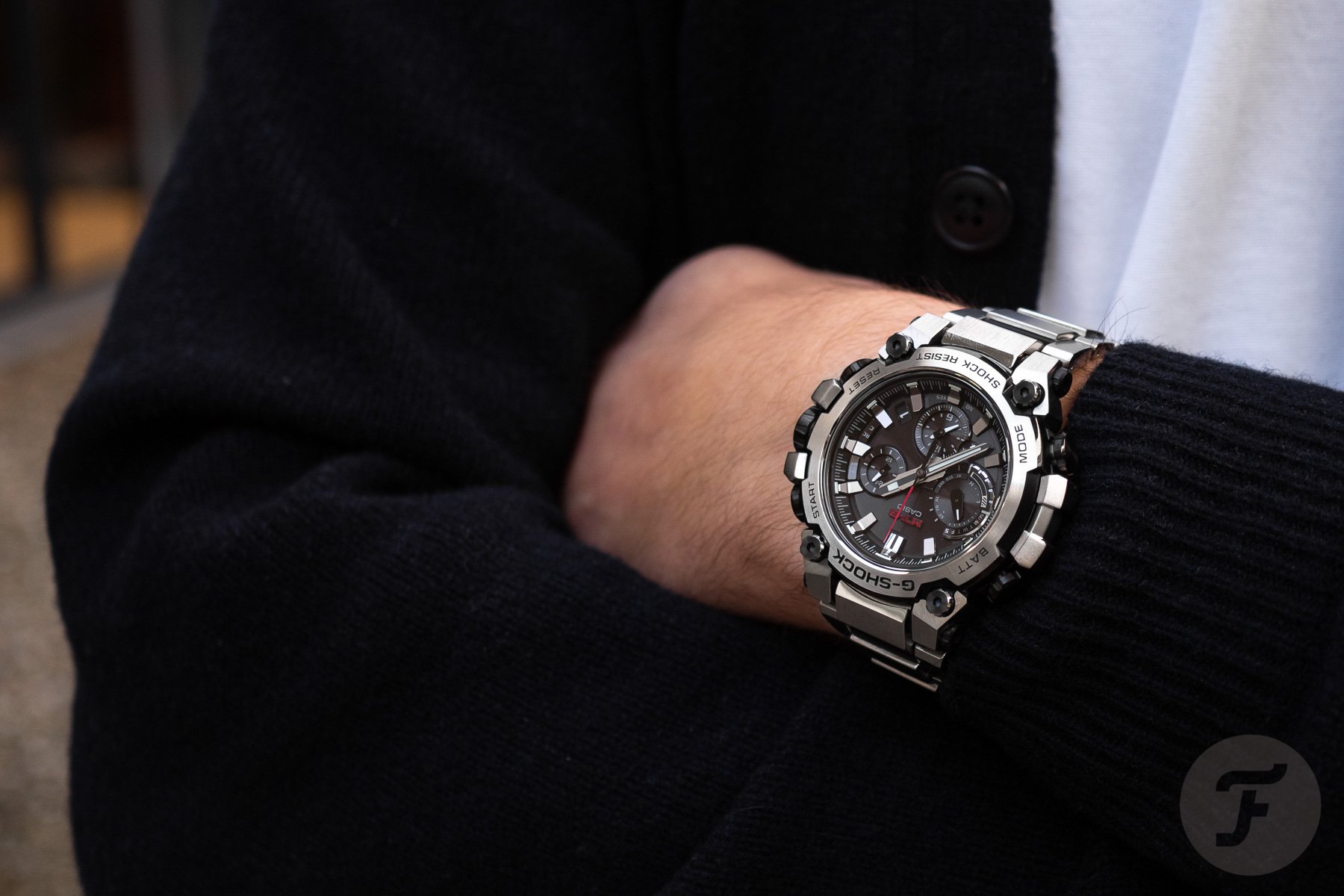 These models do not feature the same angular integrated bracelet and end links as the MTG-B2000 models. That construction made the watch only suited for people with larger wrists. With this new MTG-B3000 series, many more people will be happy to find out that the watches fit their wrists rather nicely. I loved wearing both models, as they reminded me of the incredible quality of the MT-G line. Additionally, despite the new design, both MTG-B3000 models still look like trusted G-Shocks. And with the new slimmer profile, I was impressed by how well the MTG-B3000 wears. 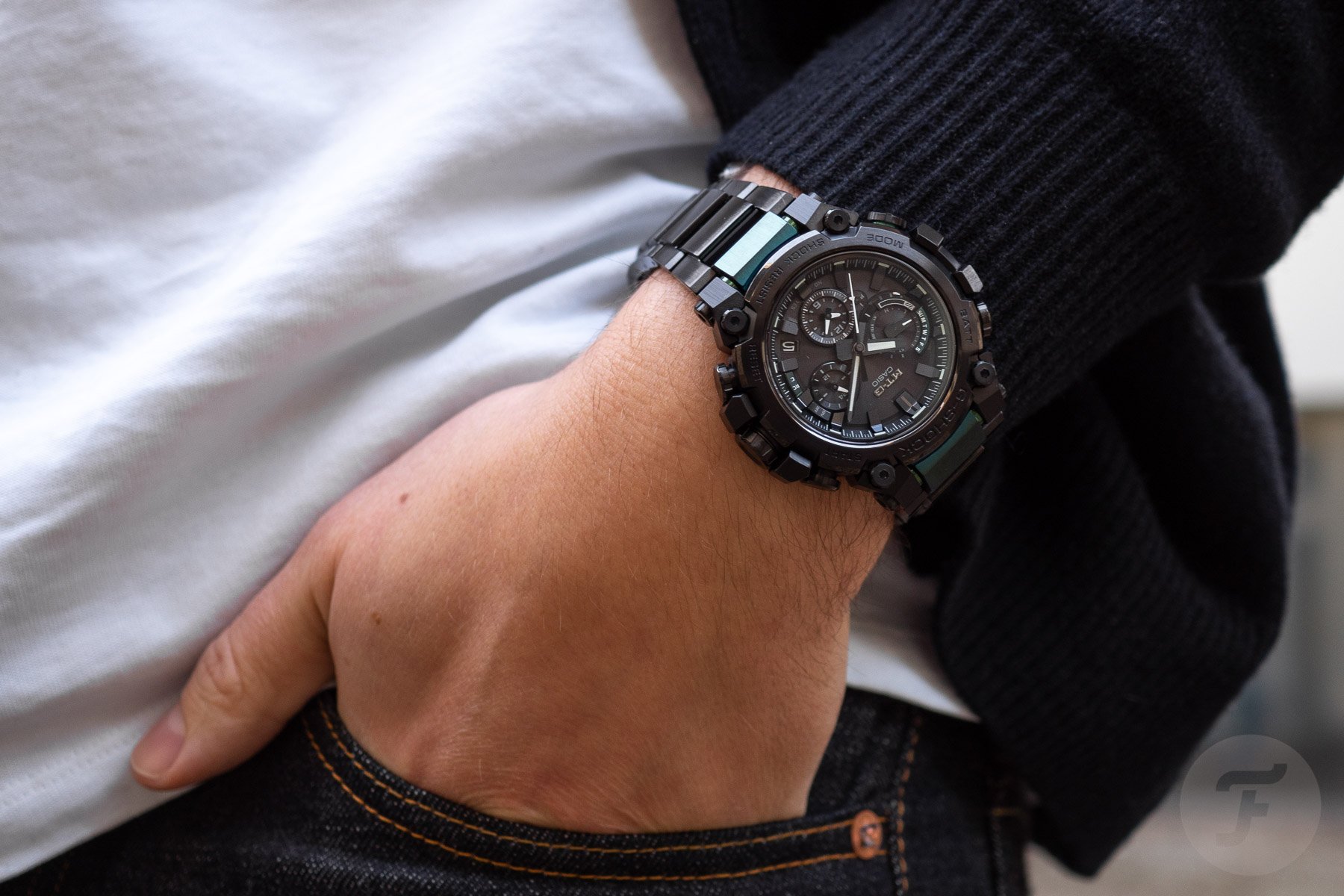 I have to say that G-Shock’s new MTG-B3000 series left a fantastic impression on me. The new module, slimmer profile, new case design with the 3D case back, and the new bracelet make for an expertly designed and executed watch. If you like a more modestly-sized G-Shock, you will probably not look at these new models because “modest” is certainly not the word to use for them. But I dare you to put one of the MTG-B3000 models on your wrist. Just try one, and you will see how well-made and impressive they are. 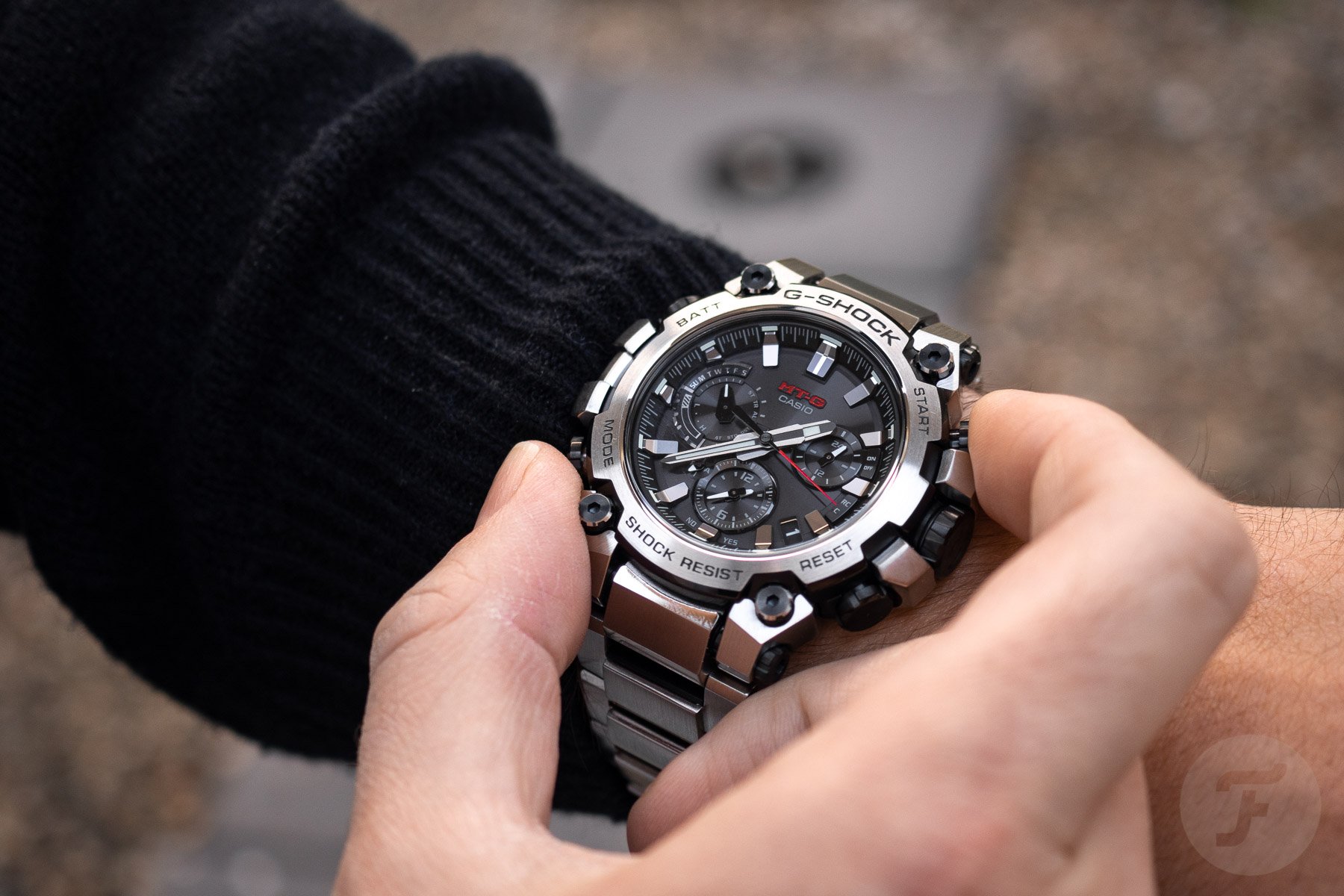 When it comes to functionality, the MTG-B3000 is in line with what we know from G-Shock. Honestly, I only use a few of these functions regularly. It’s only when I start playing around with them that I am reminded of the plethora of things that these watches can do. But it does bring a smile to my face just seeing what these watches are capable of. Combined with their looks, the MTG-B3000 models are great new additions to the G-Shock MT-G lineup. 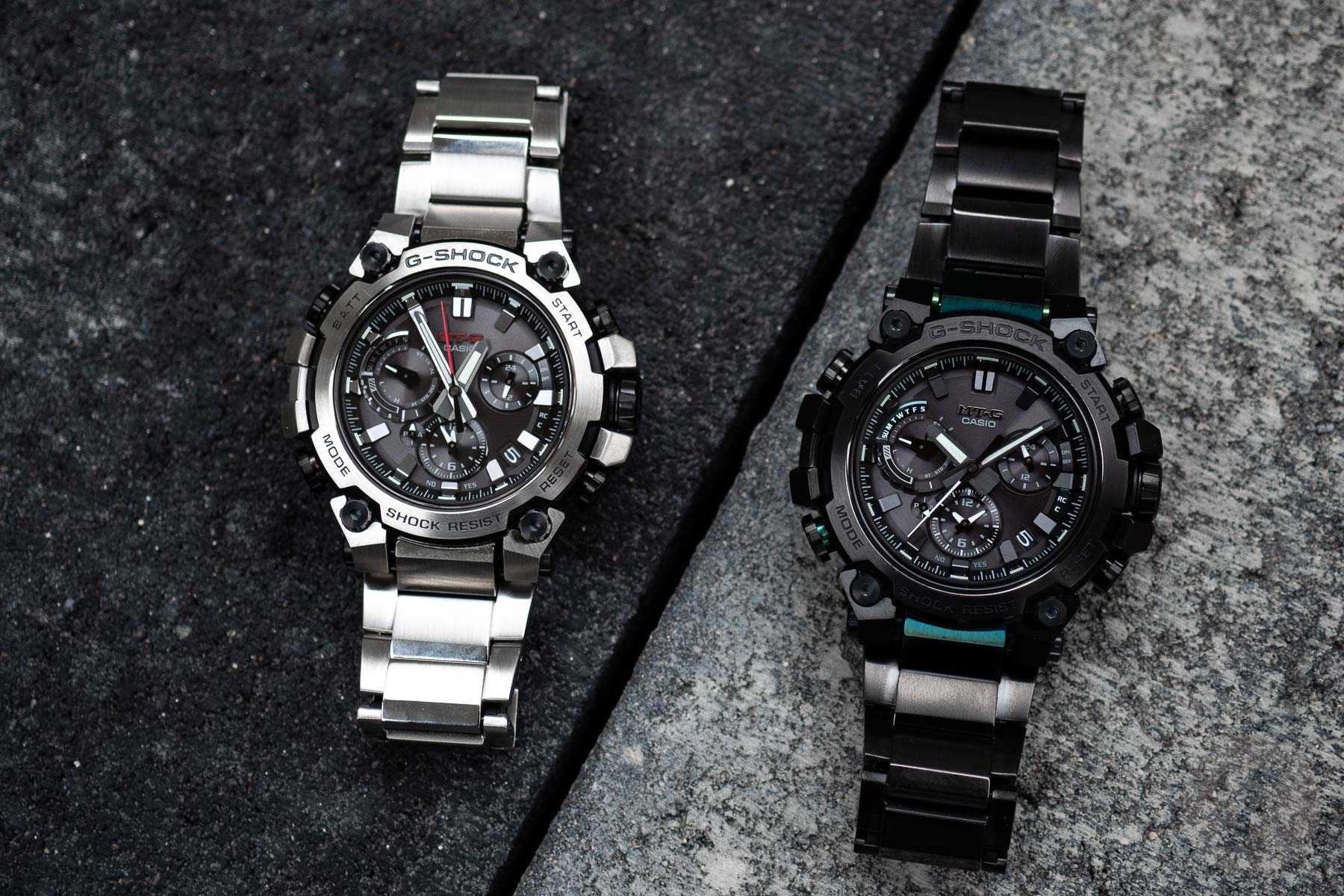 In terms of pricing, both the black MTG-B3000-1A2ER and stainless steel MTG-B3000D-1A are available for €1,100. The price is in line with other models in the MT-G line, so there are no surprises there. But I can’t wait to discover what surprising special editions of the MTG-B3000 series G-Shock will come up with. Bring out the bold colors, and I will be all smiles because the new MTG-B3000 series is just that good!

For more information on the MTG-B3000 series, visit the official G-Shock website.