Hands-On With The Farer Bernina and Cresta Chronographs

Both have the same diameter and have the same movements. The design is what they differ in. Which one will steal your heart – the blue-ish Skipper-like Cresta or the eye-popping white and red Bernina?

When I saw the newly released hand-wound chronographs by Farer, I had an immediate urge to check them out. While thinking about which one to ask for, I immediately scratched Moritz, the third musketeer from the series. I consider it too boring and traditional. I didn’t give it any further thought, I just compared the other two models and decided to review the Cresta. Only when I showed the news to my watch savvy wife, she said I have to get Farer Bernina too. So I did. 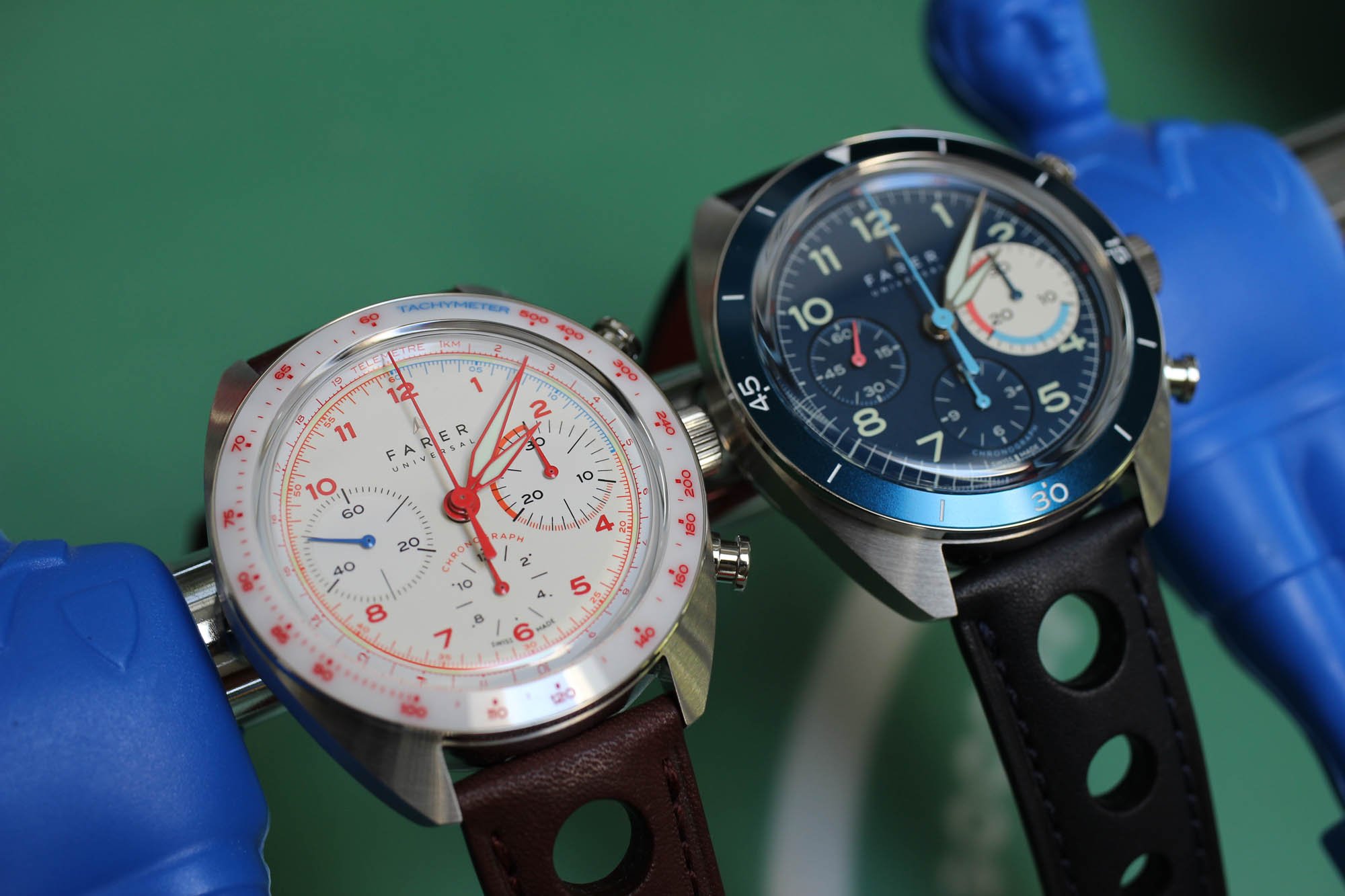 Cheating on the Farer Cresta

When I was unboxing the incoming Farer watches, I almost needed sunglasses as the Bernina was so white and shiny. It was a Saturday morning, and as expected, the Cresta landed on my wrist while the Bernina went to my wife. We went out to get our weekly shopping done, and every time I looked at the Cresta on my wrist, I immediately found myself comparing it to my wife’s Bernina. I knew something was going on. 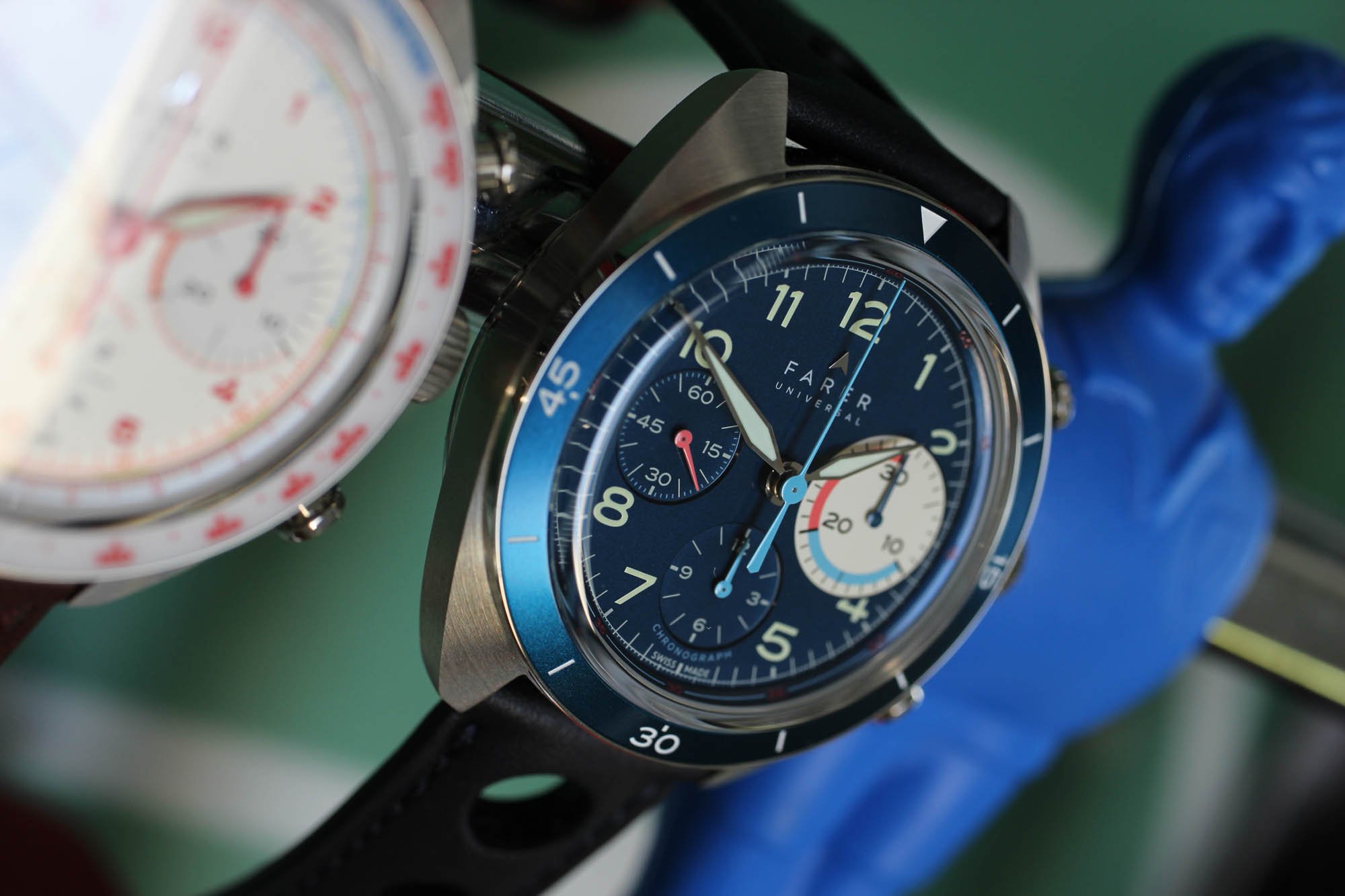 And what exactly was going on? After we got back home, I put the Bernina on my wrist, where it stayed throughout the majority of the testing period. If you hear mild sobbing, it might be the rejected Cresta laying on the coffee table. To my defense, I underwent the standard transformation of many Farer fans. In the beginning, it was like drinking sour milk, but the taste grew on all of us. In the occurrence of a personal meeting, this procedure escalates rapidly. Let’s dig in deeper. 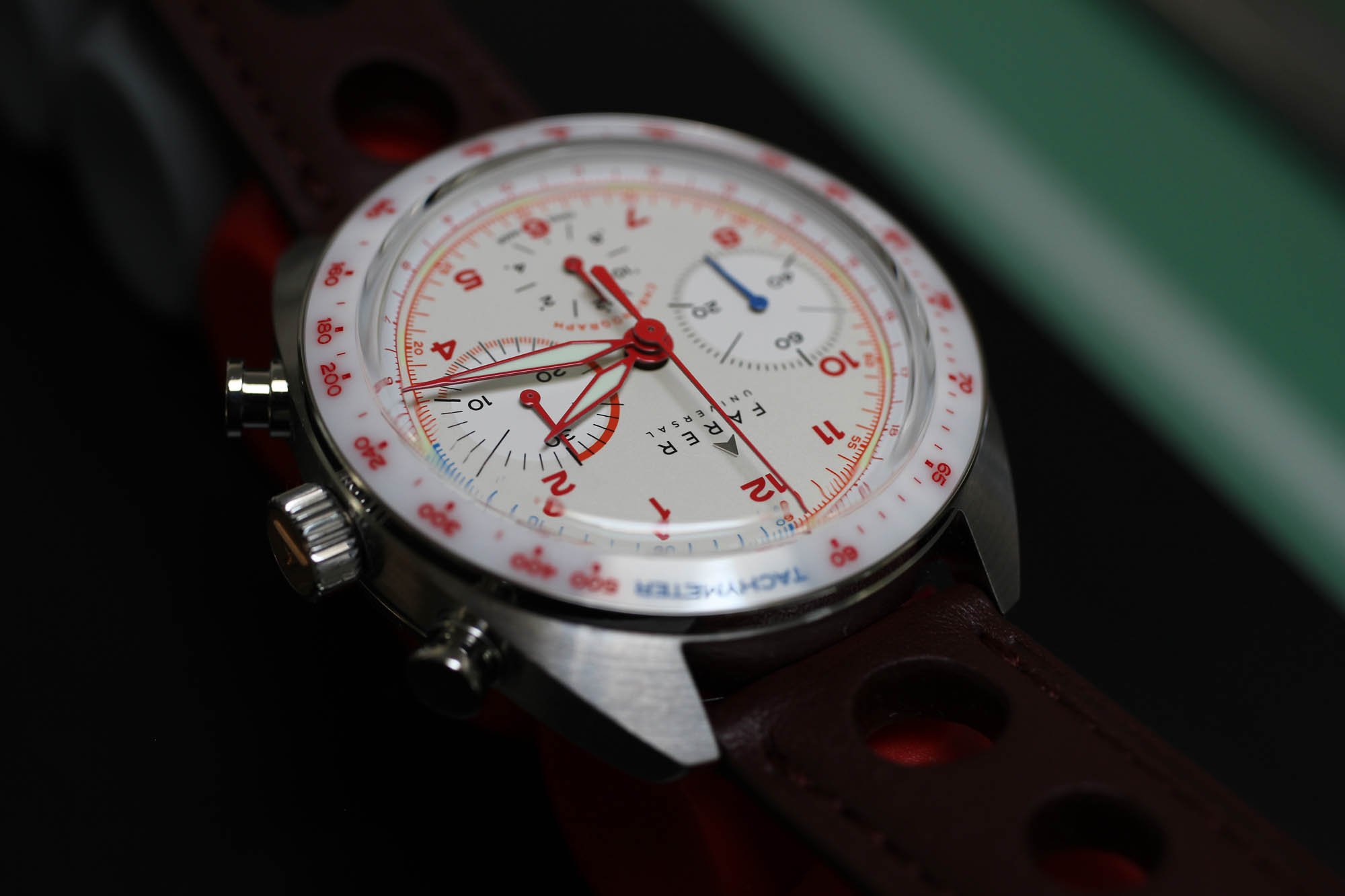 The Bernina represents the top of the new hand-wound chronograph line. It also became the official timing watch of the 2019 Bernina Gran Turismo, an iconic race across the famous Bernina pass in the Swiss Alps. As I haven’t been there myself, I borrowed a few words from Ted Gushue that he once wrote for Petrolicious : “Countless switchbacks test even the most seasoned drivers’ mettle as they climb up or down any day of the year, but for this one special weekend each year, the organizers of the event coordinate with local authorities to completely shut the pass down to create one of the most sinister, stunning, and satisfying hill climbs anywhere in the world.” 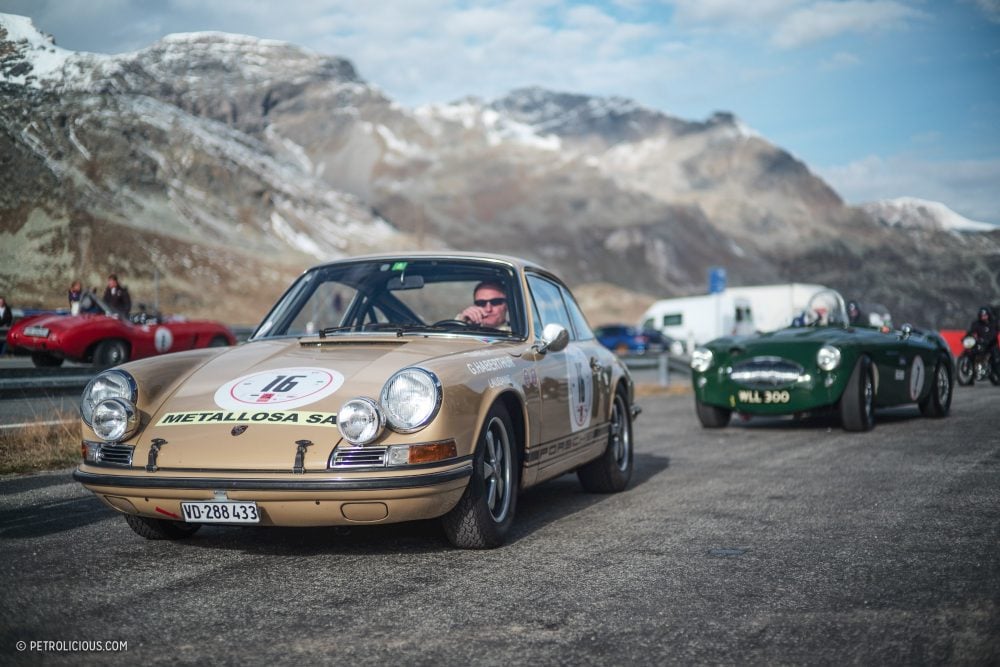 Bernina under the radar

Who would design an entirely white dial, including the telemetric scale background, the Super-LumiNova hands, and even the bezel in white? And I forgot to say that 90% of the other elements are in racing red. Every single time I put the Bernina on my wrist last week, I knew I was in the company of only a few like-minded people. It is so different on so many levels, yet sticking to the bedrock principals of a classy chronograph. 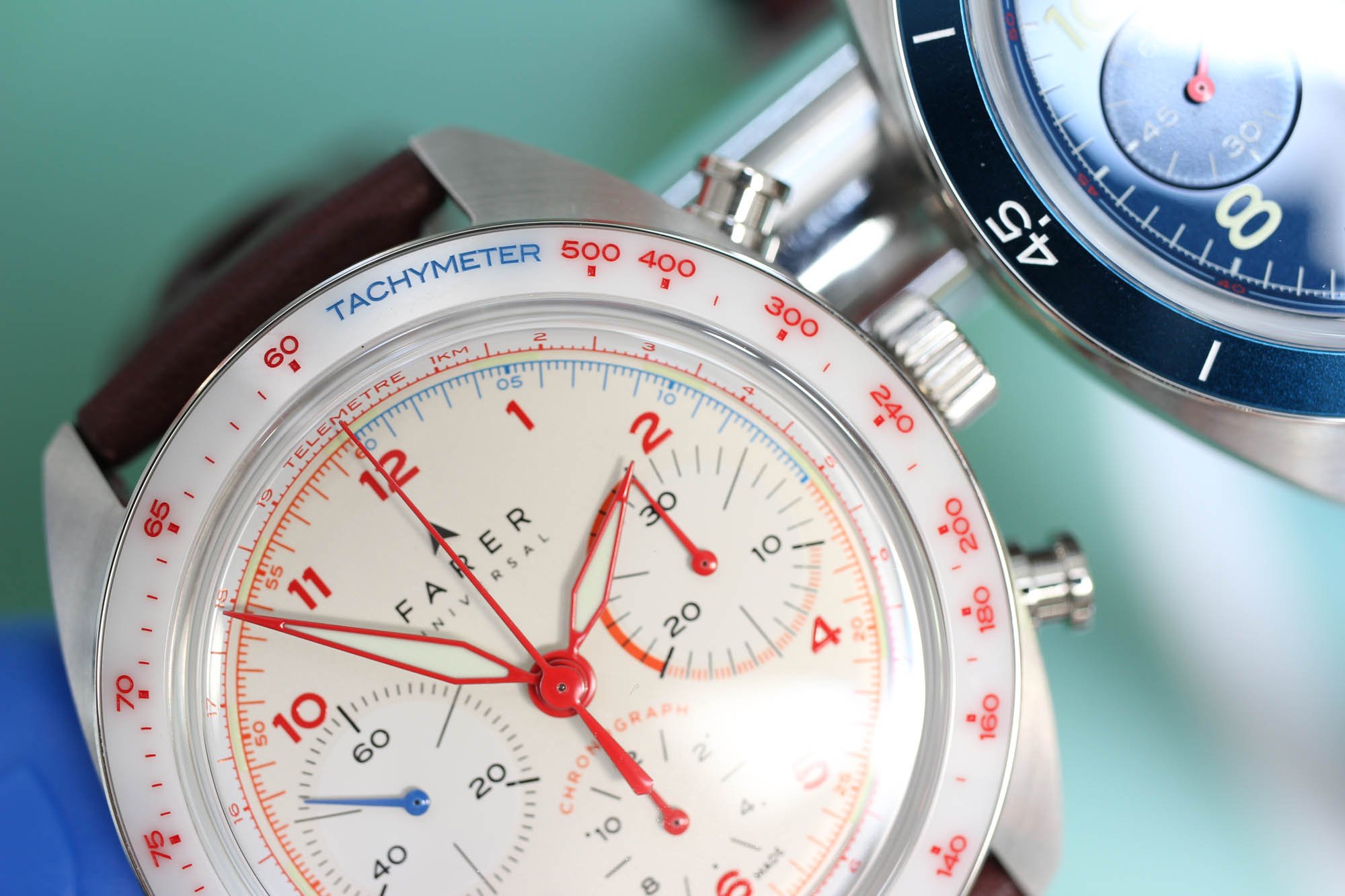 The bezel is a gamechanger

I am sure that the bezel is the fight or flight detail, catapulting the Bernina into its unique category. The milky white ceramic bezel is marked with a daring red tachymeter scale. I don’t know if it is my eyes only, but it produces a shadow-like effect around the numbers, like ink soaking and disappearing around letters on paper. Moving towards the central hands, you come across a full red telemeter track, minute track, and surprisingly small-sized Arabic numerals for hours. 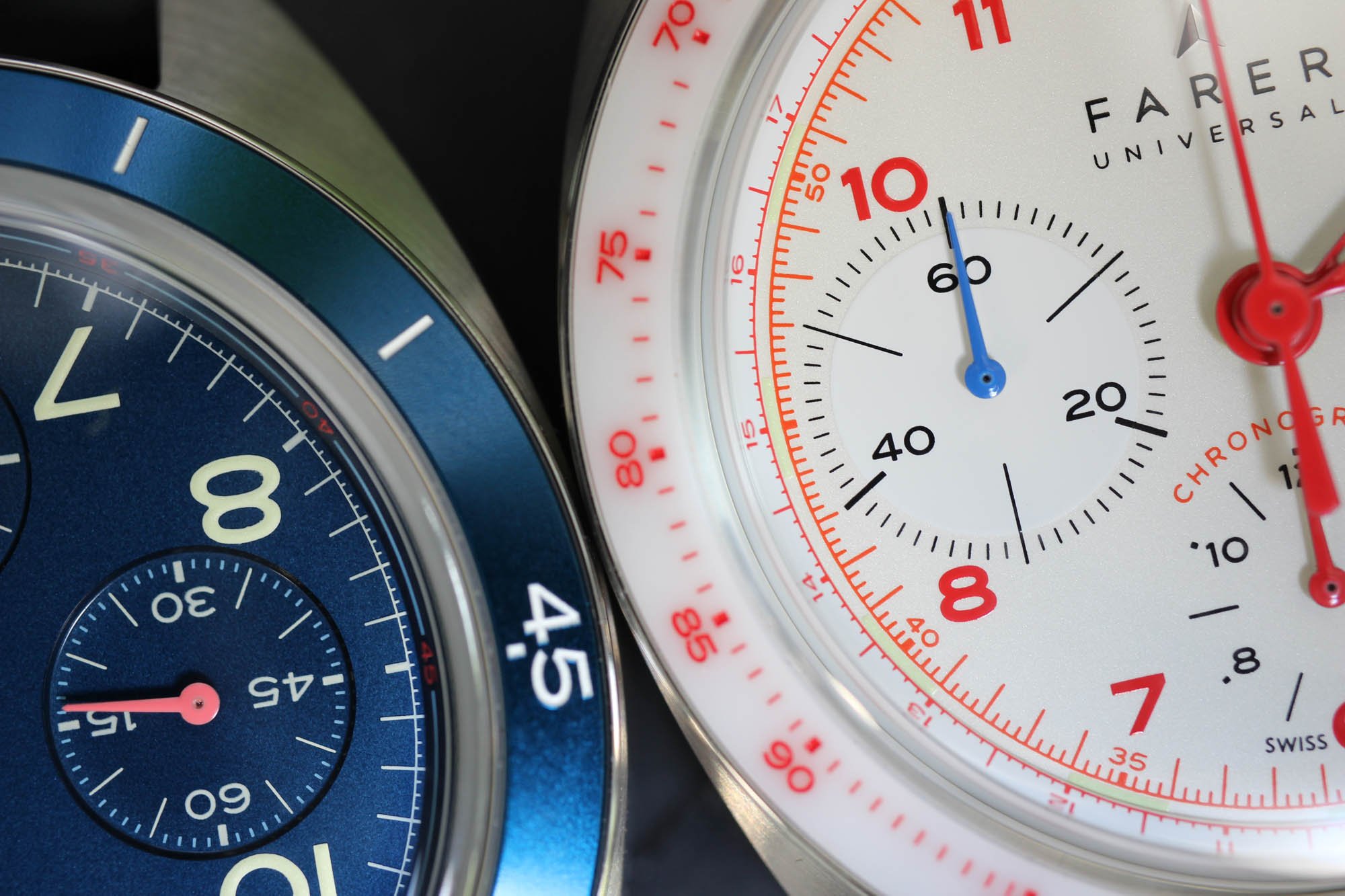 The hour numbers are all complete. Not a single one is cut off by the brilliant white embossed top twin sub-dials or the bottom 12-hours counter that is directly printed on the flat matte off-white dial. One thing I like about Farer is their typography selection. As I liked the font selection on their premier watch GMT Barnato four years ago, and their first automatic Beagle the year after, this Bernina shows their good taste in typography. 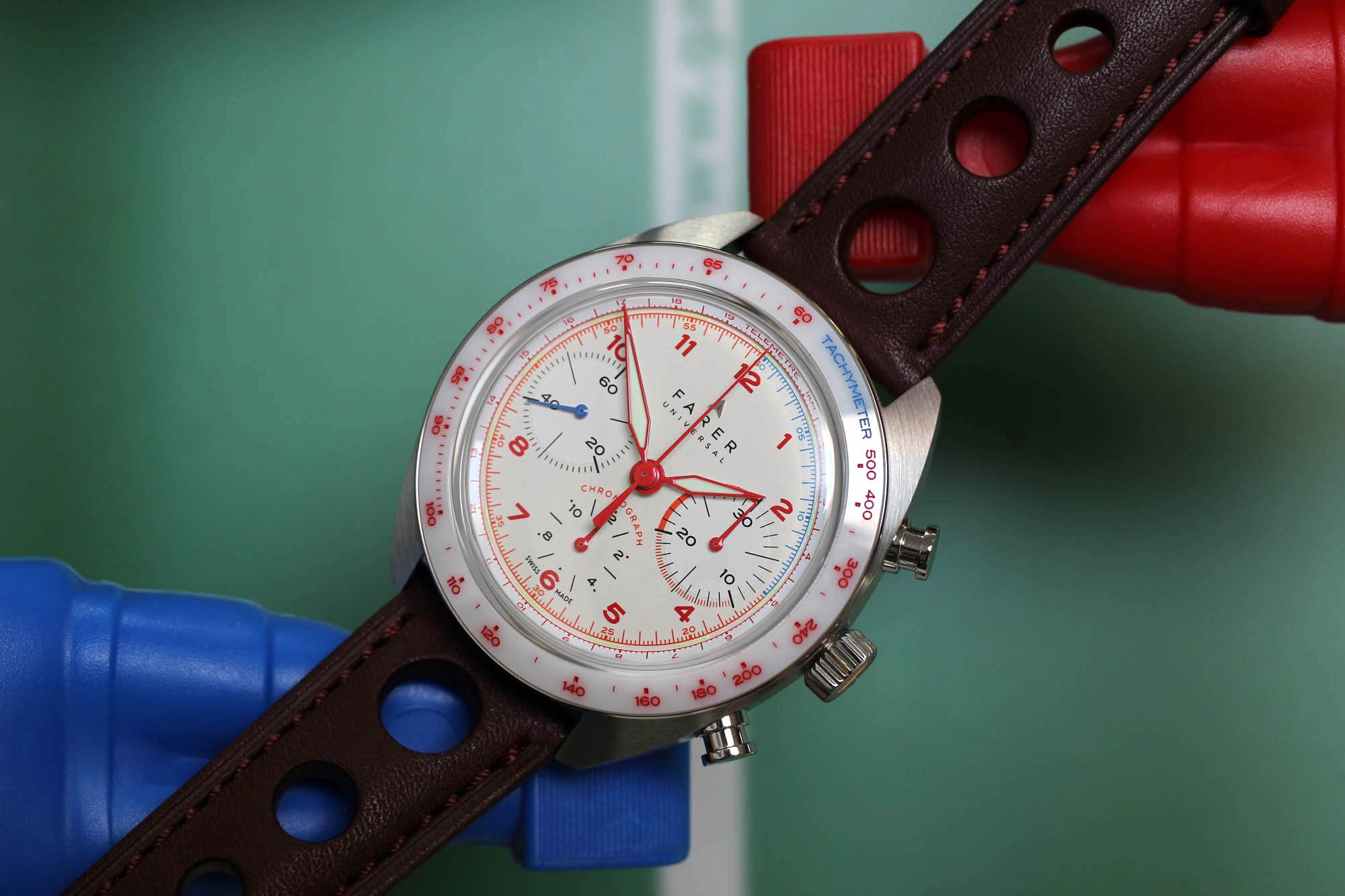 If you hear mild sobbing, it might be the rejected Cresta laying on the coffee table.

Before testing the watch, I thought it would be a nightmare to read the time or chronograph on the Bernina. I still have no rational explanation why, but after a week on the wrist, I have to say that this is not the case. I remember when first seeing the Bernina on a picture, thinking: “Too busy!” That’s why I switched my attention to the Cresta. And if I look at them side by side, I would still call the Bernina busier. But not less legible. 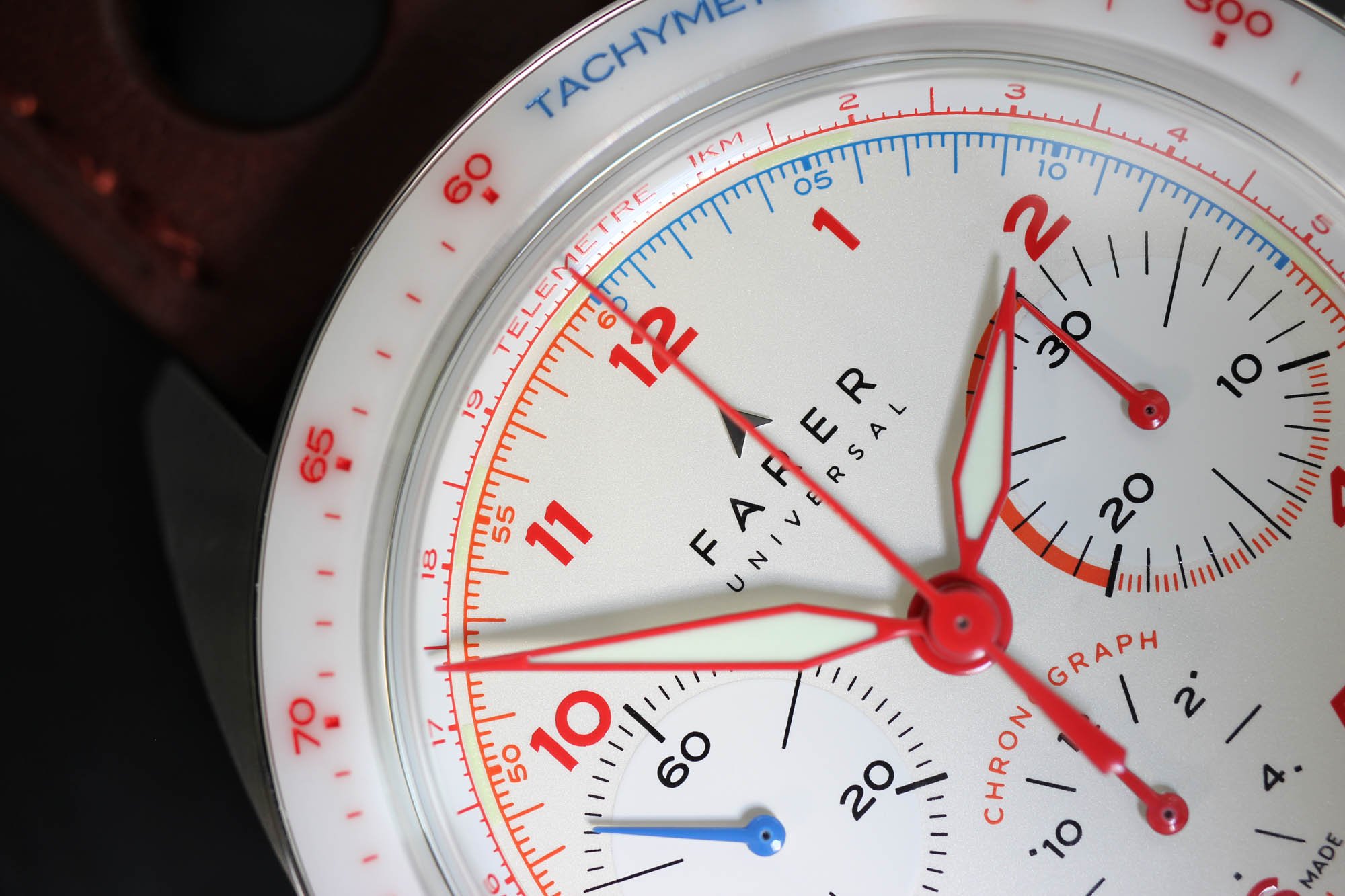 Farer Cresta under the loupe

Dark blue elegance, decent bezel, the dial stripped from all the redundant sporty scales. But still, looking into that big white eye, so shiny on the all-blue matte dial, you have to recognize the daring Farer spirit. The hours seem to be written in the same font as in the Bernina, and it just doubled in size. The numbers ‘2’ and ‘4’ are a bit cut off to accommodate the considerably bigger minute counter. In contrast with the Bernina, all three sub-registers sunk into the dial, giving the Cresta a more mature, or if you prefer, a more vintage look. 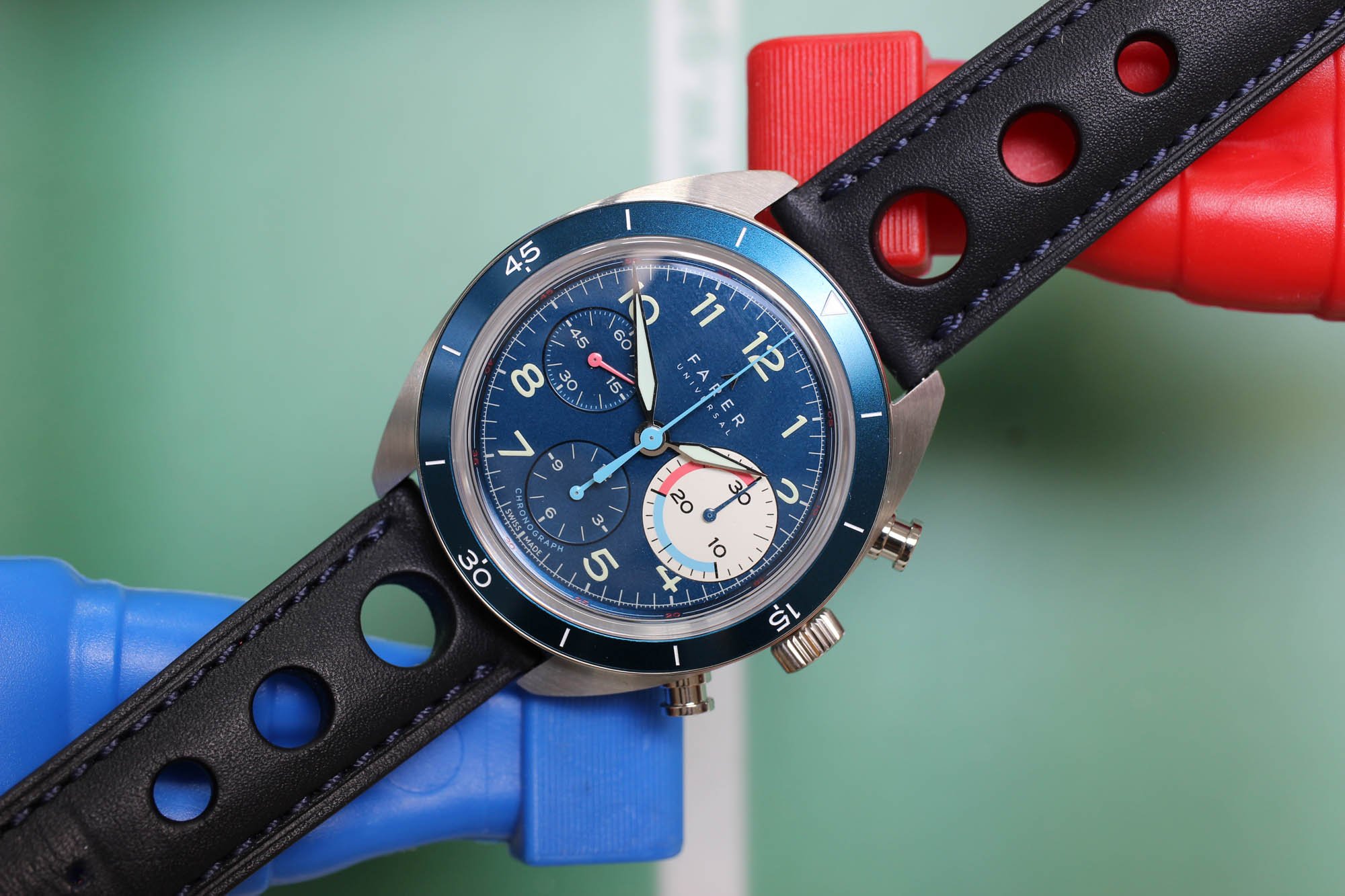 Both the Cresta and Bernina cases are made of  316L stainless steel and finished with a circular-brushed top and horizontal-brushed side. The case back is polished and has an individual number engraved.  The case fits perfectly on my wrist and measures just 44mm lug-to-lug and 12.9mm in height (including a domed box case front crystal). 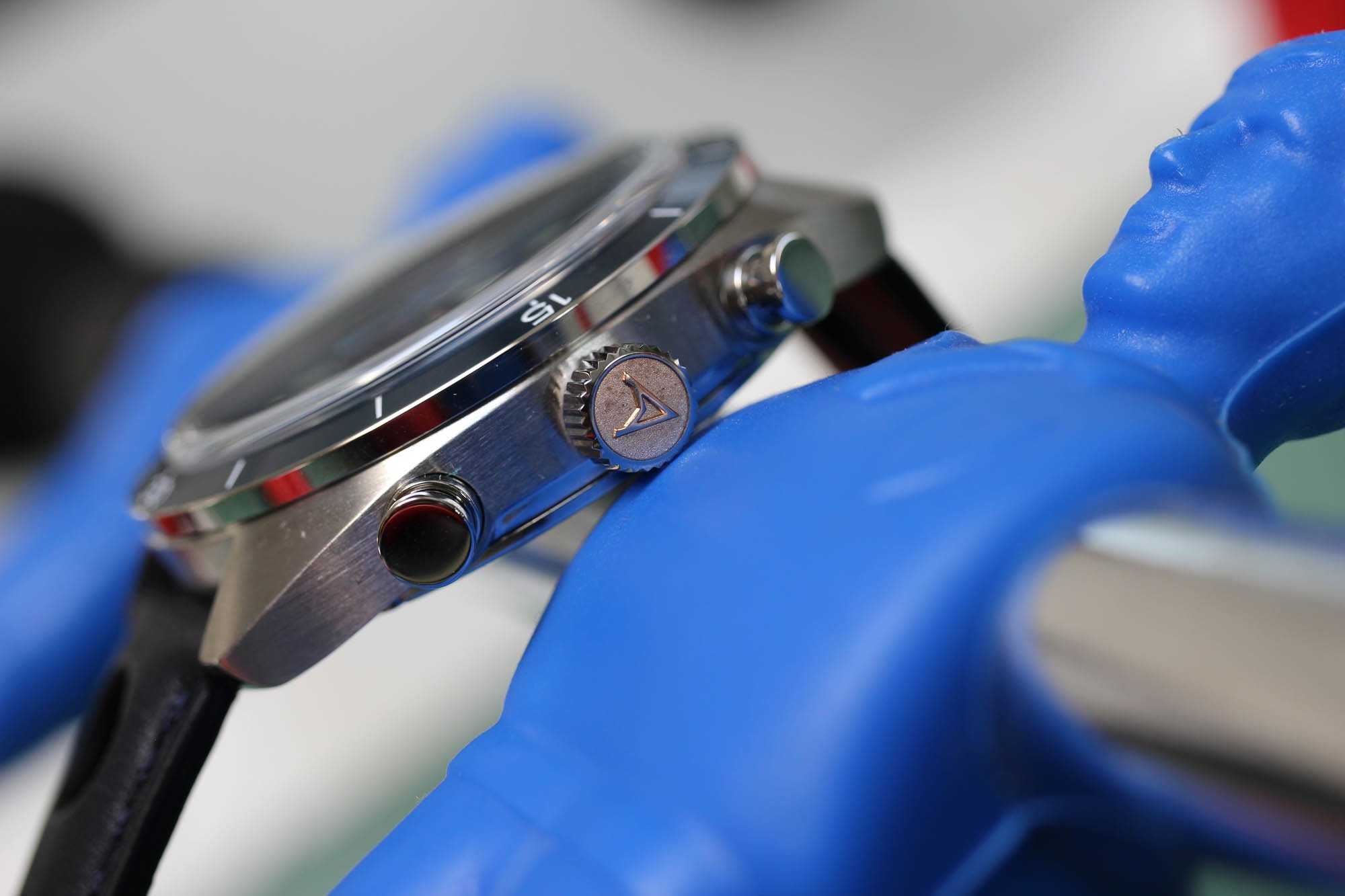 If you look at the Farer webshop to see the product line up, you will notice automatic models with entirely bronze crowns. To put it mildly, some people were not excited about this. The hand-wound series have a crown made of polished steel with a bronze cap. As an enthusiast of vintage watches, I have to extend a virtual high five to the polished capped recessed pushers made in stainless steel.

The milky white ceramic bezel is marked with a daring red tachymeter scale. It produces a shadow-like effect around the numbers.

Taking into consideration how quickly Farer moved from quartz, to automatic and then to hand-wound movements, I would not be surprised to see an in-house movement from them in the future. For the time being, you can enjoy a customized bridge with an engraved Farer monogram checkered sports pattern through the sapphire crystal case back. The watch is powered by the Sellita SW510 BH movement. Designed in Britain, made in Switzerland. 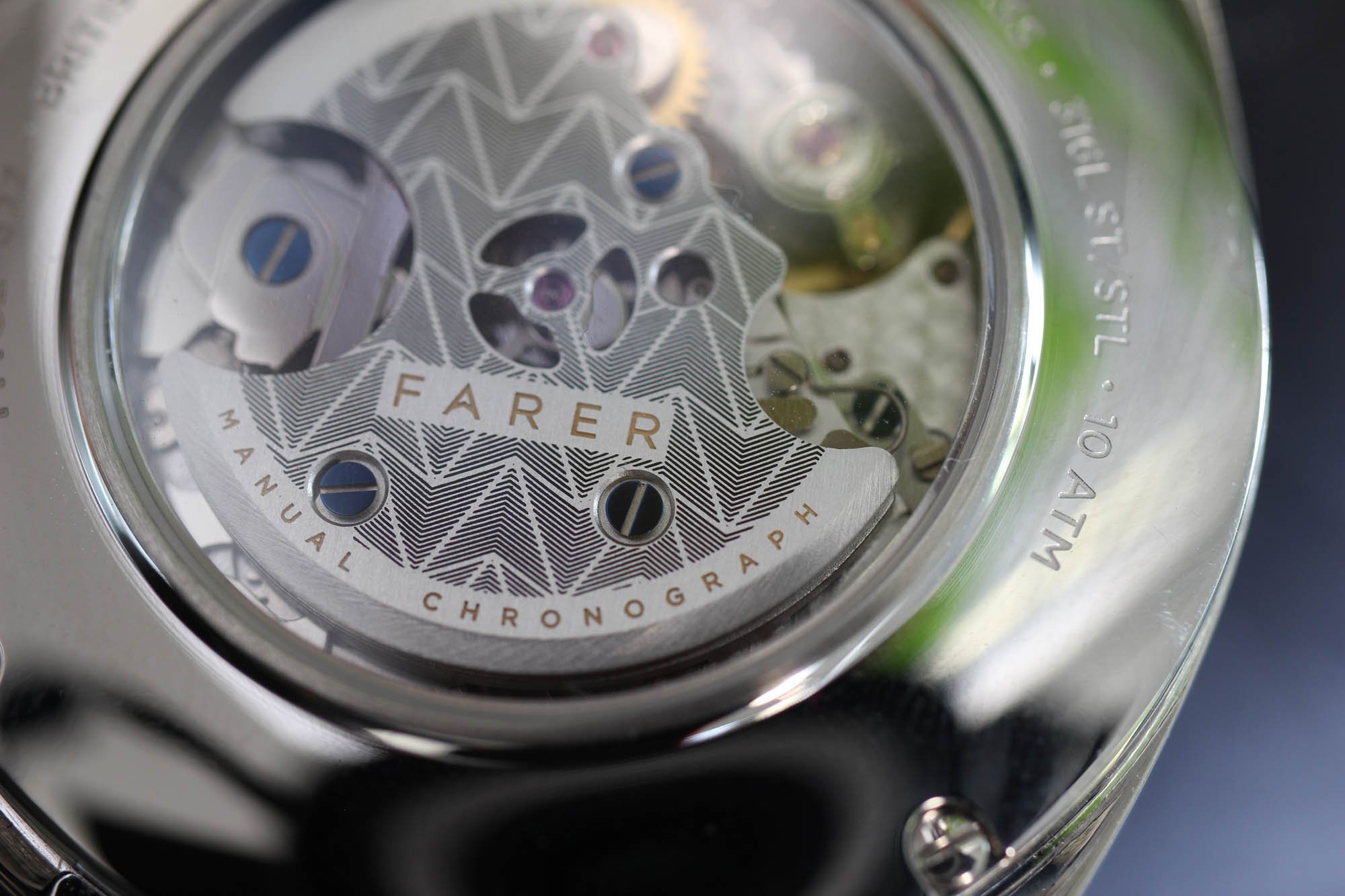 The 12-hour counter on the Bernina is particularly enjoyable. The same can be said about the polished relief Farer logo. The race-style straps have quick release pins, making it easy to swap them for other straps. I got both watches paired on contrasting straps, but I switched them to fit the dial more. I recommend this if you consider purchasing one of these watches and are not sure on straps. 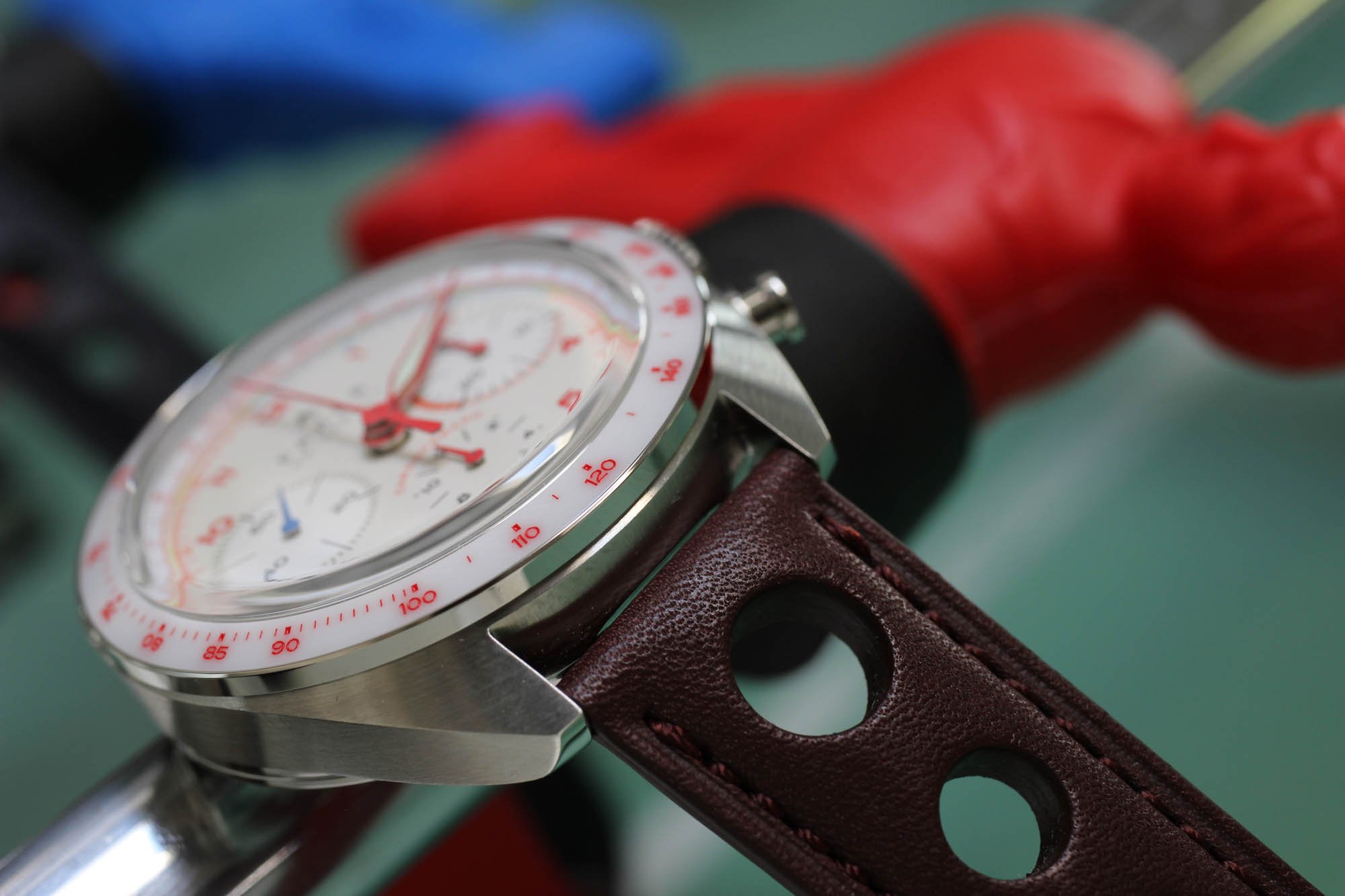 Comparing to what’s out there in a range (slightly) below 2000 Euro, you have some beautiful (modern) alternatives. If you are fond of this specific case shape, you should not forget about the ETA powered Tissot Heritage 1973 Chronograph. Balazs recently reviewed a 1990,- Euro re-edition here. If you want something smaller, the Yema Speedgraph with a Seiko movement might be yours for 1.499 Euro. Are you still leaning towards one of the Farer watches priced at 1.850 Euro? Let’s wrap it up then.

Never before, I took watches from the same collection for a comparison review. I might have ended up with the Cresta only and probably would have been content with my choice. But my wife made me order the other one as well, and look what happened. Reviewing both at the same time has made me bend the knee to the Farer Bernina.

As they are both priced the same, I would choose the Bernina. It is more charismatic, individualistic and I guess more time-resistant in terms of design. On the other hand, I see why some customers would feel the Bernina is a bit over the edge and would prefer sticking to the more classy Cresta. Which one do you vote for?

Hot Topics
Introducing: The Omega Speedmaster Super Racing With Spirate System
162 comments
Design Vs. Specs — Which Is More Important To You When Buying A Watch?
86 comments
The Time To Buy Is Now: How The Current Economic Climate Influences Watch Buying And How You Should React
51 comments
My Predictions For New Omega Speedmasters In 2023
48 comments
A Regret-Free Guide To Buying Your First Luxury Watch — Part Three: Higher-End Options From Omega, Rolex, Grand Seiko, And More
48 comments
Popular
Rolex Submariner – Historical Overview Of A Diving Legend
Robert-Jan Broer
22
You Asked Us: Rolex Submariner vs Omega Seamaster
Robert-Jan Broer
25
Hands-On: Breitling Navitimer 1 B01 Chronograph In 43mm
Robert-Jan Broer
3