When someone says worldtimer I usually imagine busy or — pardon my French — downright messy dials. We have seen maps, bezels, and inner bezels visualized in a billion ways by now. In contrast, the Junghans Worldtimer is shockingly clean. In the blue/grey color, it feels almost cold and reserved, but somehow, through the sheer weight of its smart design, it still gets under your skin.

I have followed the production of German brand Junghans very closely since I bought a Meister Classic model in 2013. It is the cleanest three-hander you can think of. The Junghans design language is very consistent, only going slightly off-piste when it comes to motorsport-inspired models. I love those too by the way. Last year on Fratello, I wrote about the Junghans weekly calendar watch, a pretty neat and unusual complication. In December, Junghans released a worldtimer watch and I decided to take a closer look at it for a few reasons. 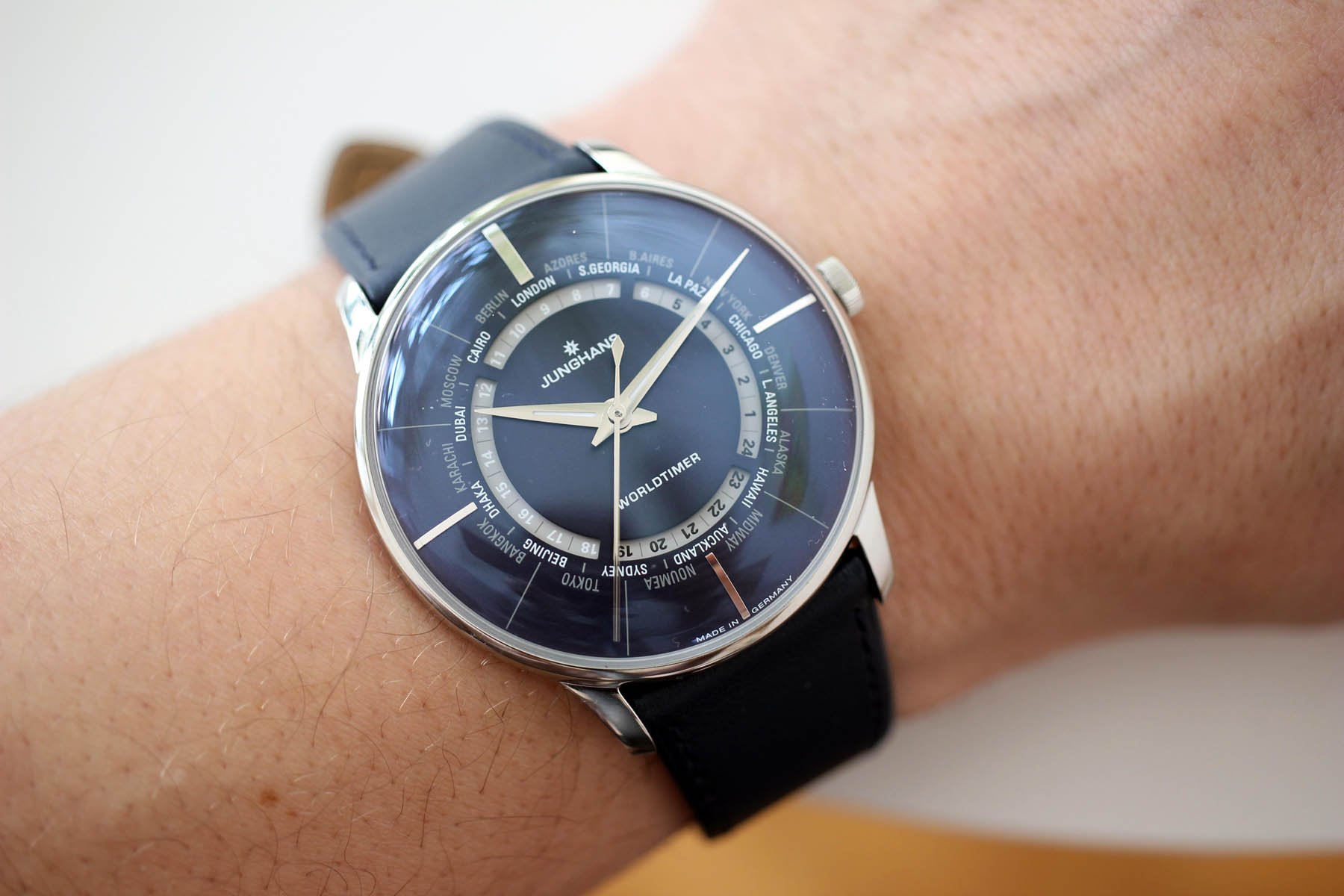 “In addition to business relations spanning the globe, more and more families and friendships extend far beyond international borders. The progression of digitalization is increasingly transcending the laws of space and time.”

If you were worried that I had suddenly become a paid brand ambassador, fear not: the above quote is lifted directly from the press release. We all know brands love to throw a bit of justification into the mix, but what do we make of this spiel? Do I believe it? Aren’t these just words crafted by a master marketer?

Maybe they are; maybe they aren’t. Oftentimes, those of us charged with reviewing these releases simply don’t care. If the watch is good, it’s good. If it is well designed, it deserves respect. And, in my opinion, whatever the press kit says (or doesn’t say), this watch resonates with me and, I think, stands out in an evermore crowded field. 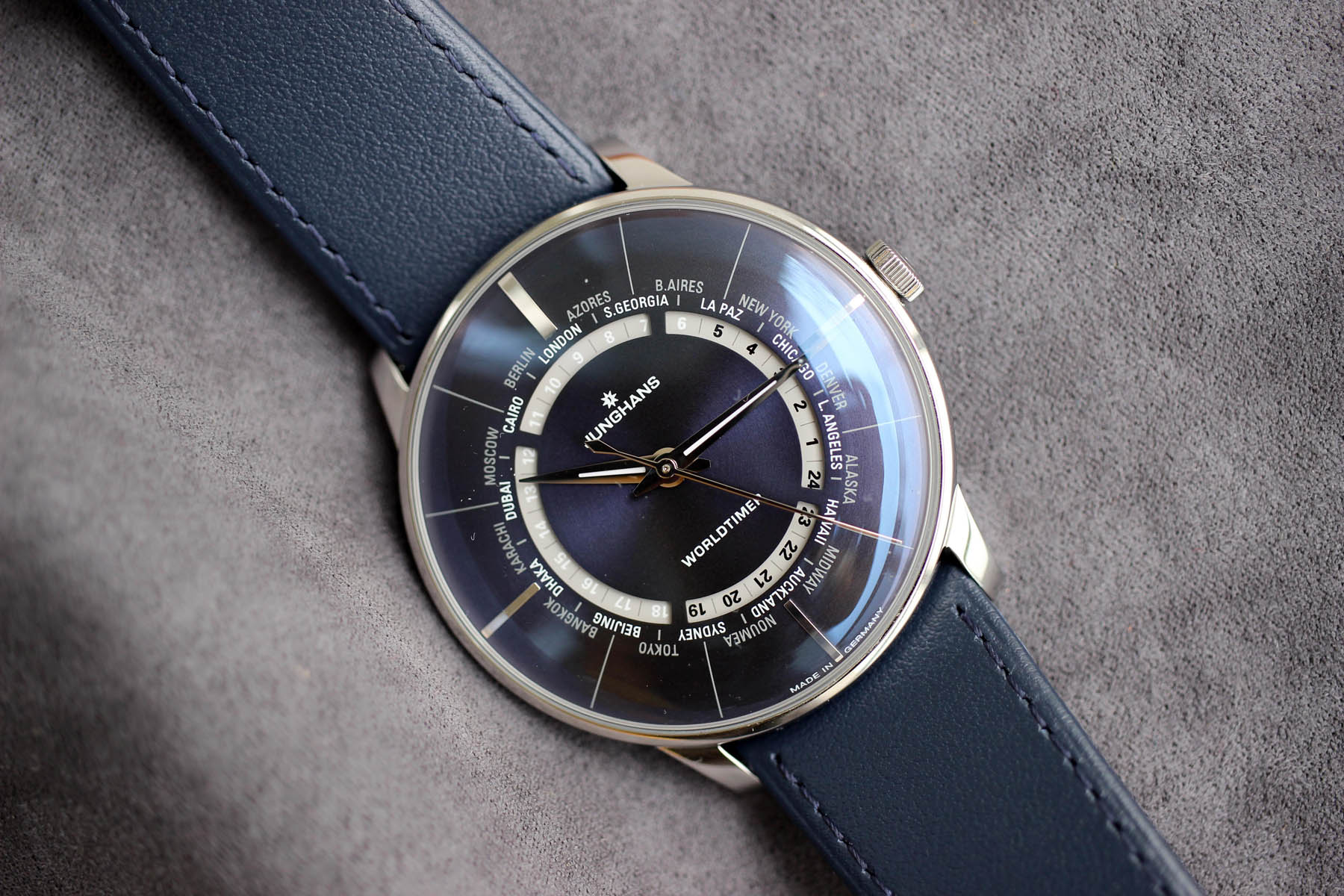 First of all, there is neither an outer, nor an inner bezel. Just as there is no extra crown to operate it. It feels like Junghans took a machete and decided to cut off one-third of the weight and mass of a typical worldtimer watch. The Junghans Worldtimer immediately ranks amongst the sleekest, lightest, and most elegant worldtimer watches I’ve ever seen. It is up there with the Ming 19.02, but is far more affordable with its €1,690 price tag.

Better yet, it is still available.

If you take into account how much information the dial carries, it’s actually pretty airy. The worldtimer functionality is secured through a trio of concentric elements. Two of them are cities printed in white and grey right on the dial. The third one, which is closest to the center, is a bit different. It’s basically a radial aperture created by four arcs. If you look at it from an angle, you will realize the central part of the dial would sink in if it weren’t for the four thin bridges that attach it to the outer dial part. It’s quite unusual and feels like a part in a plastic model kit frame you want to press out with your fingers. 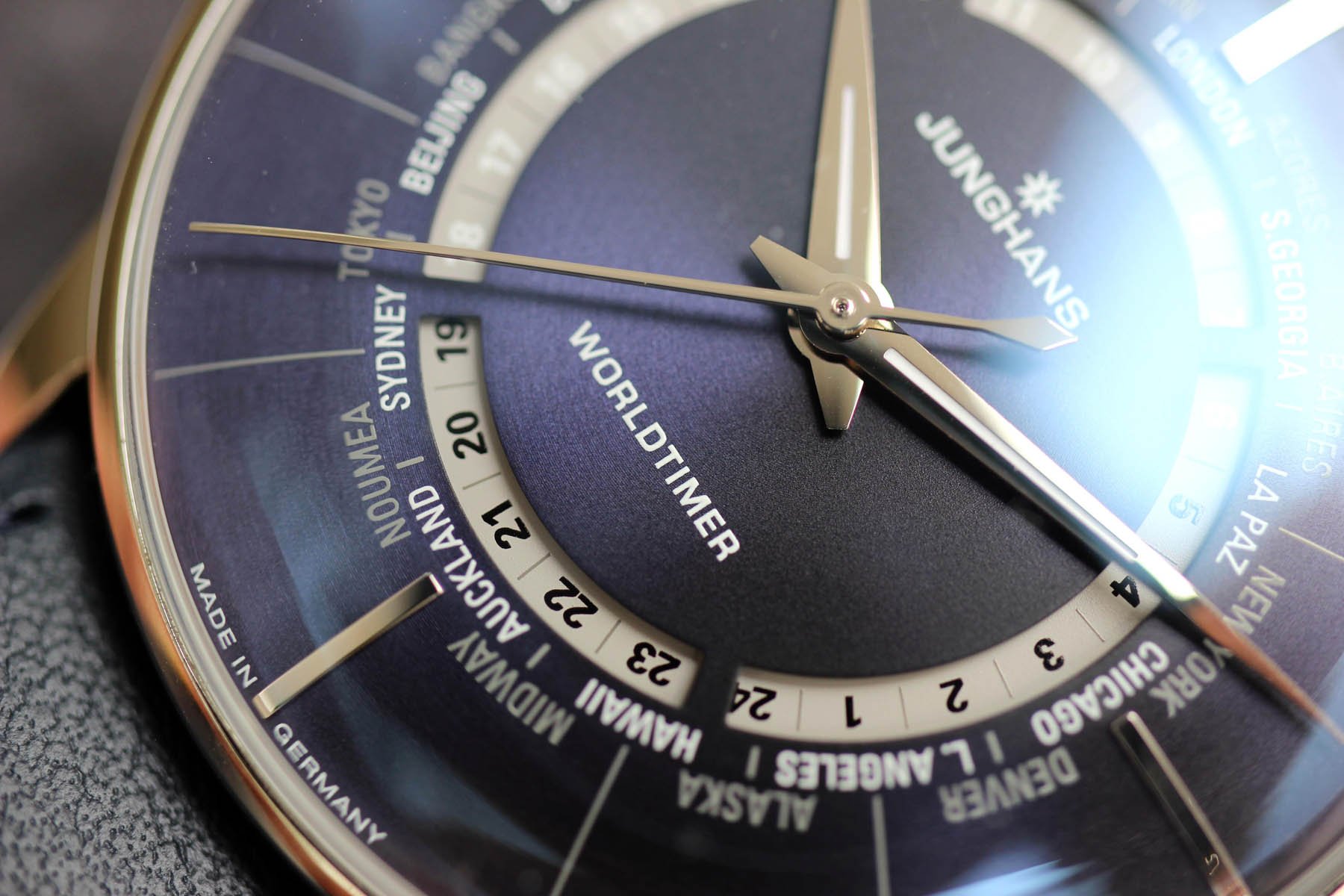 Through the aperture, you can see a slightly sunken grey hour disc that tells the time in 24 parts of the world at the same time. If you need to set the time in the second time zone (or back home), you pull out the crown in the first position and align the hour on the disc with a city. Nighttime hours are printed in dark blue; daily hours show in white.

I found the watch legibility perfect. I think the tightness and the flat design of all three of the worldtimer elements help a lot. Some of you might find the watch a bit boring, almost dull. It can feel like the minute track and Arabic hour numerals were stolen by some thief in the night, robbing the dial of its expected furnishings. However, kudos to Junghans for keeping this truly pared-back watch functional throughout. Furthermore, the watch is quintessentially Junghans. It is far harder for brands to cling to their identity while integrating these more complex complications. Here, Junghans excels in that field. 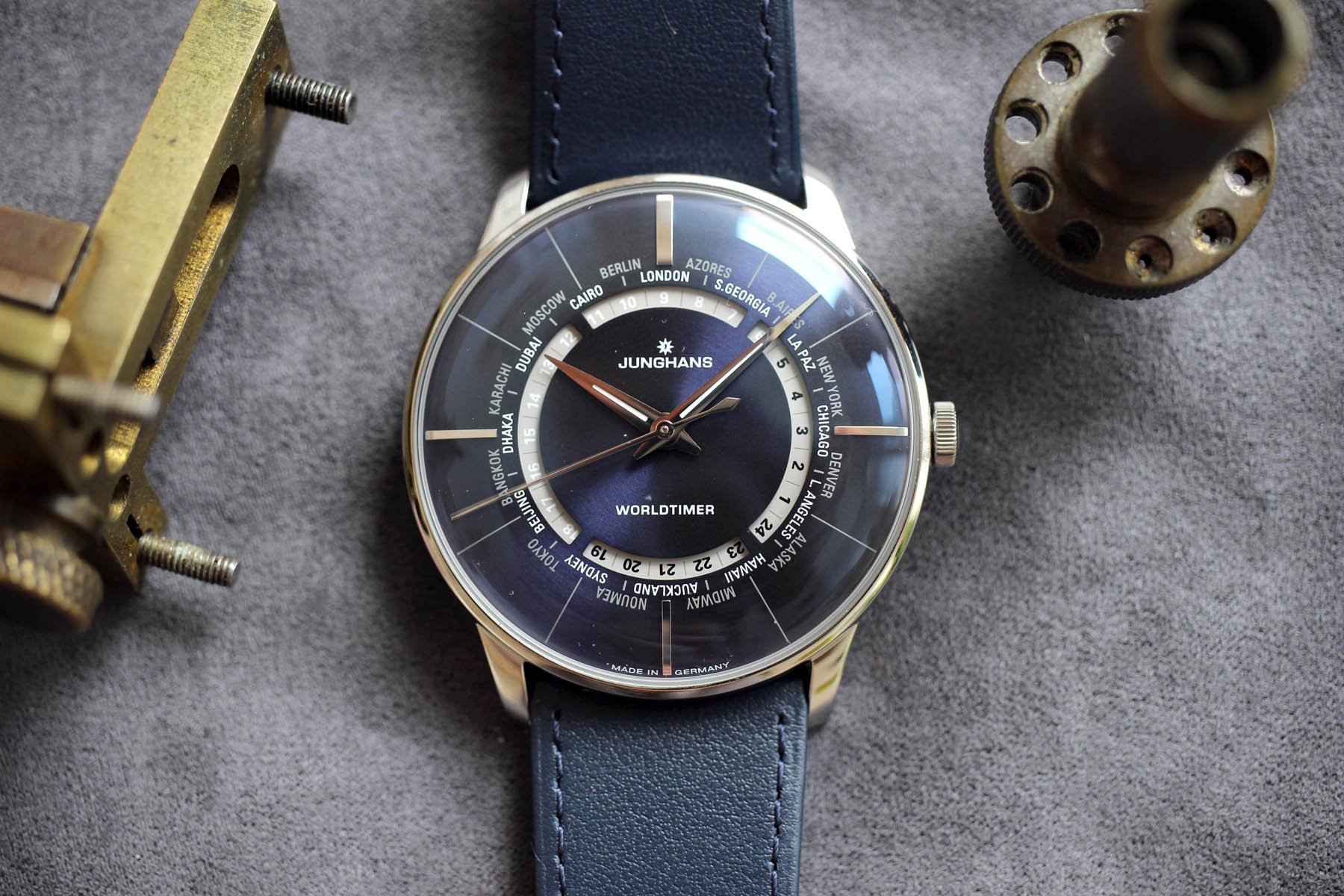 The globe on the wrist

The Junghans Worldimer came to me almost immediately after release. That was almost three months ago. The reason you are reading the review today and not three months ago is not because I was bieng lazy. I simply wanted to get to know the watch better. Well, I don’t think I have ever tested a watch as long as I did this one before reviewing it. I dare say the Junghans Worldtimer is not a watch with which you would fall in love in a second. Yet, the worldtimer functionality and its minimalistic beauty grow on you.

It took me a few weeks to fully notice and appreciate the domed main indices.

I took it, as the dial seemed unusual. I was surprised by the cold attitude the watch seemed to have in our first week. Slowly though, I started to recognize the good old Meister I have loved since 2013. It took me a few weeks to fully notice and appreciate the domed main indices. If you combine that detail with the quite high domed crystal and round edges of the dial, you will see the shape of the globe in it. Give it a full frontal view and you will feel like you are holding a ball. 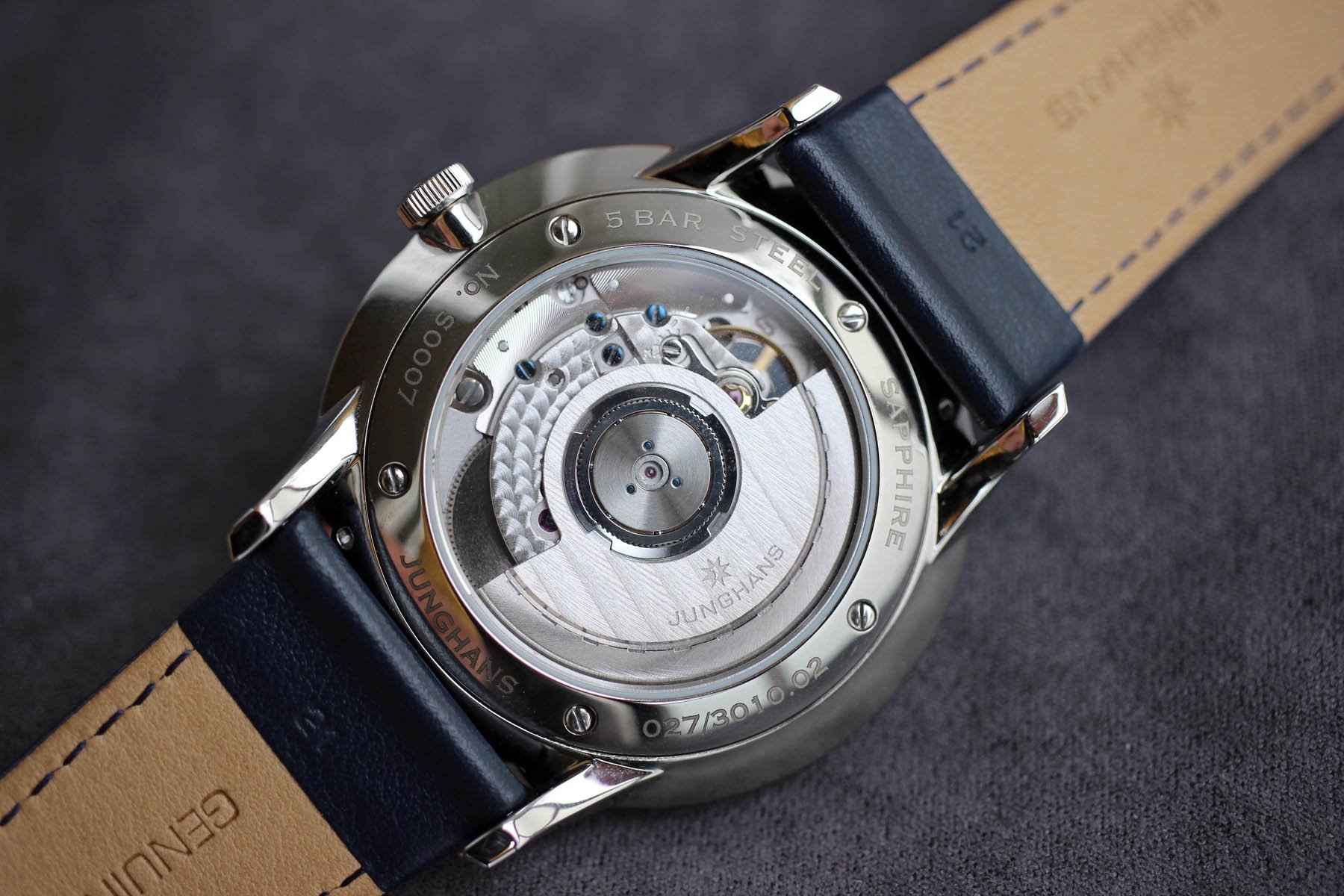 The case back slopes in so drastically, that the watch looks razor thin. Don’t be surprised to feel a 50/50 ratio on the case and crystal when looking from the side. Wrist comfort is top-notch. The watch is light and the 40mm case diameter is perfectly balanced on the wrist. The Junghans straps add to the overall feeling of slimness. They are pretty unique, very thin, but solid. I can confirm they last a surprisingly long time. At first, I thought the “old-blue“ color tone was totally off, but after three months together I  think I might set up a Facebook Fanpage for it. The Junghans decorated movement is Sellita-based. 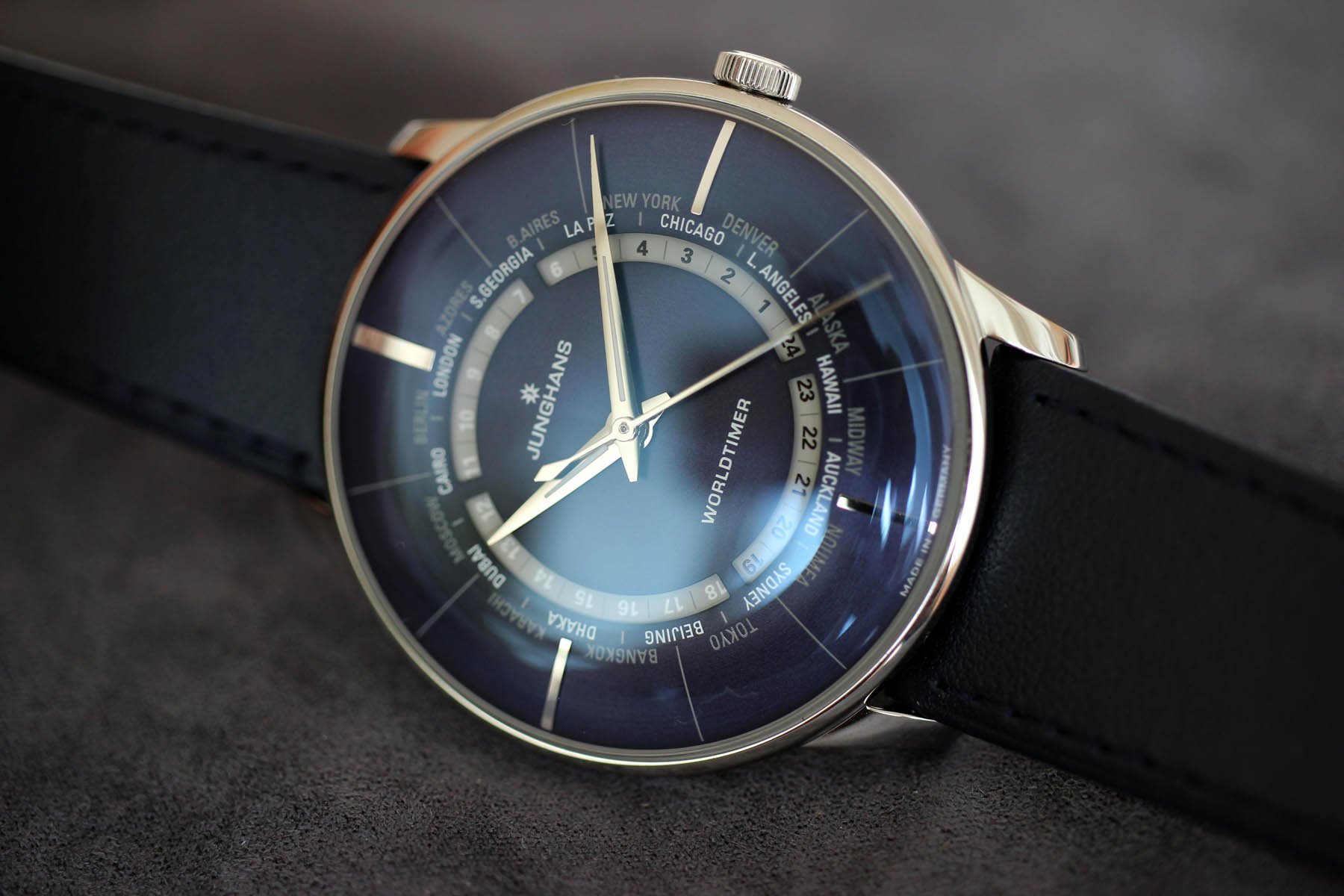 The real question is, how often do you want to use a second zone for actually telling the time? If your heart beats in two different continents or distant cities, I would put the Junghans Worldtimer high on your list. Junghans found a creative and original balance between a watch and a worldtimer. I really appreciate the original minimalism that puts the worldtimer at the center, while the Meister standard-time mantra stays untouched. The Junghans Worldtimer is a nice example of how a clean and simple dial can be original at the same time.