Heritage and History – The Power Of Panerai

3, 6, 9 and 12 – There is no watch brand that relies, so much on these four bold numbers. Year after year, Panerai keeps its followers in a grip and surprises them with new models. Often with minimal changes, since at Panerai it is all about details. Now I just said minimal changes, but that’s a bit crude, ‘minimal’ only counts for those who just know the brand  by name; any die-hard Paneristi notices every tiny detail that has been changed.

Panerai was around 1935 commissioned by the Italian Navy to construct watches for use underwater.  When Navy orders dropped in the late eighties and watch collectors started to show interest in these vintage Panerai watches, the Vendome Group (Cartier International, nowadays Richemont Group) took a bold step and bought the brand in 1997.

The new owners turned Panerai into a consumer brand and launched their first new models in 1998. I remember like it was yesterday, the launch took place at the SIHH in Geneva. Panerai was reborn but now focused on the private consumer, with a small collection of watches that hardly had changed from the original models. In those late 1990’s, a 38mm watch was already fairly large, so the first 44mm Luminor models looked like something from out of space and made Panerai the talk of the town.

During the first year, just a few new Luminor models were presented, followed in 1999 by a limited edition (200 pieces only) Luminor in burshed titanium, the PAM0036, with the magic words ‘Marina Militare’ on the dial. It had a display back, showing the Unitas 6497-2 hand-wound movement and was sold out quite quickly. Nowadays a PAM0036 sells for over Euro 20.000.-, when it pops up somewhere. It should not to be mistaken with the less interesting, but still quite desirable blue dial version, the ‘Marina Militare America Vespucci‘, that goes  for around Euro 12000.- at auctions. Panerai makes watches for all type of men, those who just prefer a good looking sporty watch, as well as for the die-hard collectors of the brand, who are more interested in the history of the brand. Being able to serve both groups is exactly the strength of Panerai.

Every year there are quite some new models presented and there are always a few Boutique Specials and Limited Editions. This PAM00587 for instance, made in 47mm like the original and in a limited edition of 1000 pieces, is a typical example of a Boutique Special. 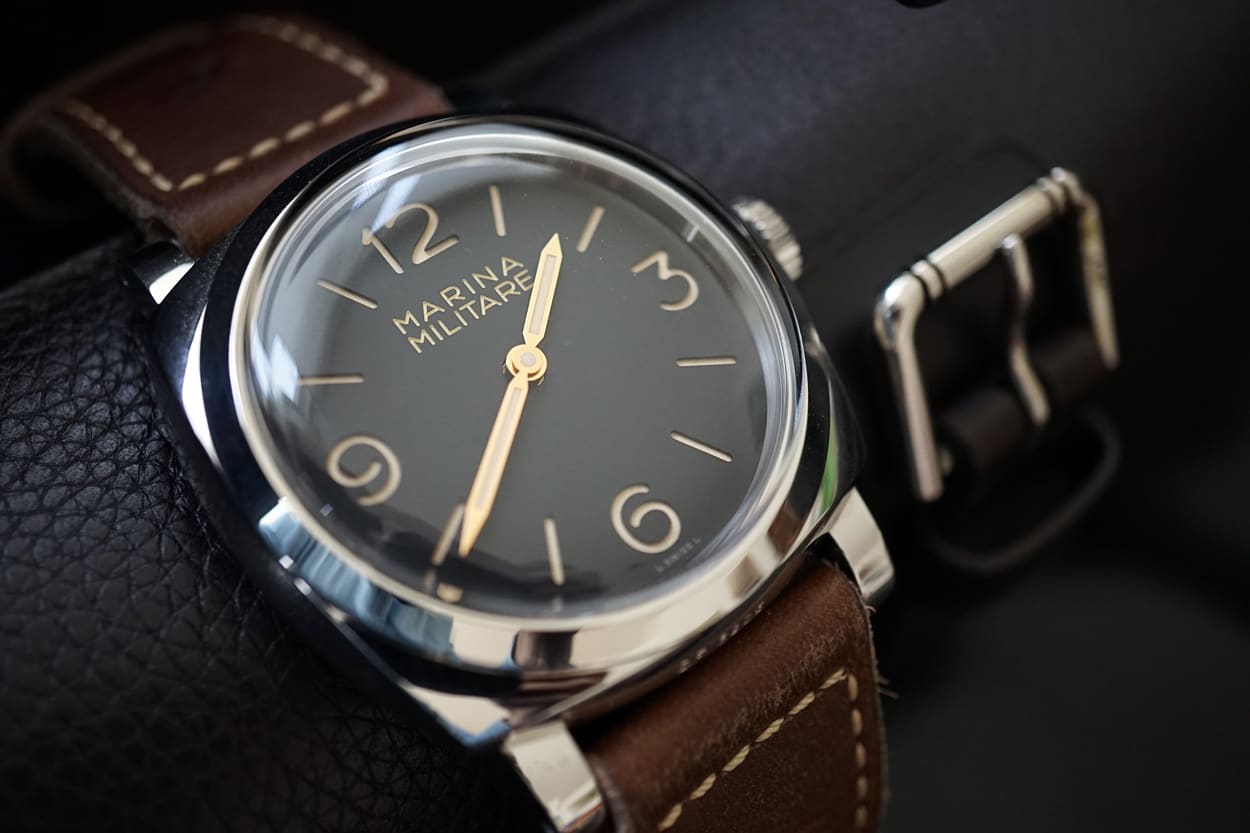 It was made in 2014 and represents a reissue of the original 6152/1 model. Special Editions like this may be tough to get, when there is no Panerai Boutique nearby. 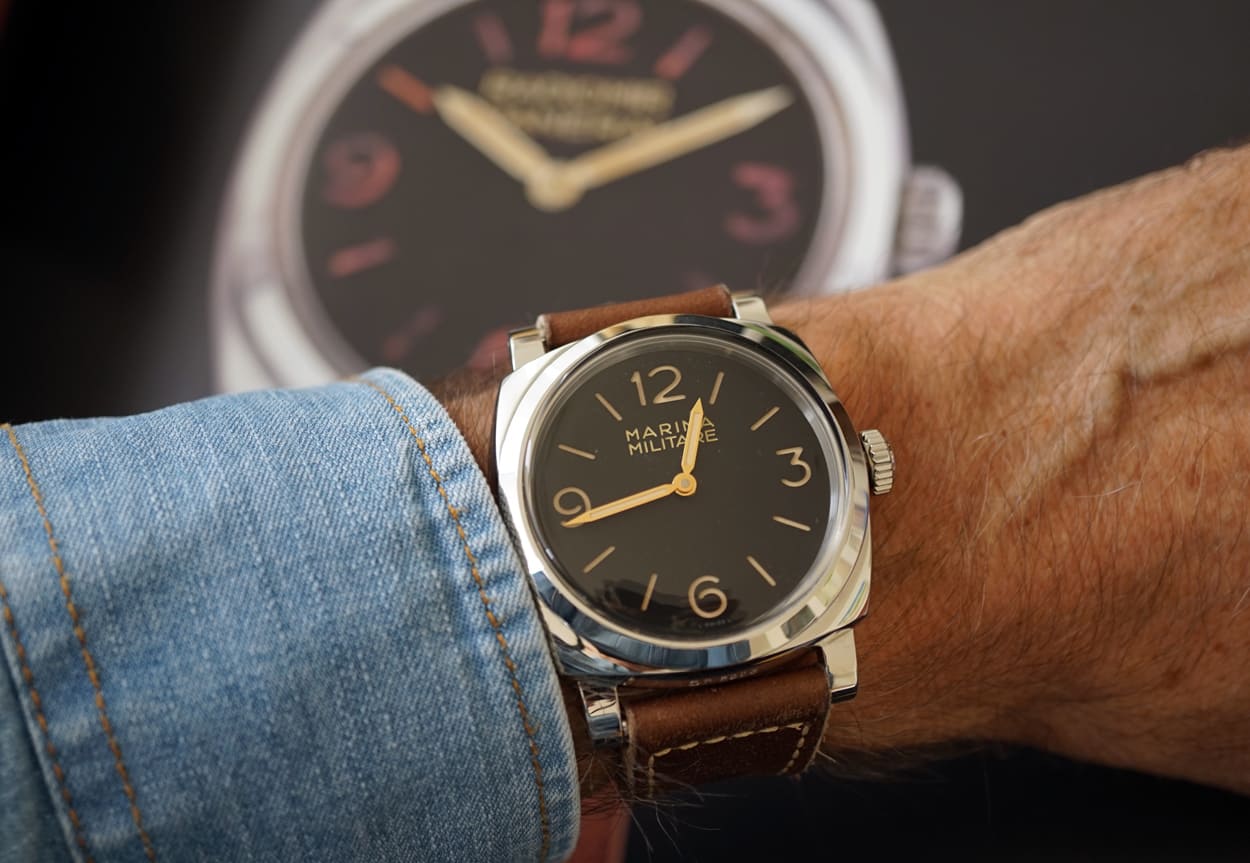 However, all of the +70 Panerai Boutiques world wide will ship the watch, no matter where you live. Limited Editions are easier to lay your hands on, since they are also available at AD’s. However, you still need to act right away sometimes to get one, like for instance the PAM0662 that was released this year. Produced in a limited edition of 1000 pieces only, this Radiomir offers a completely different looking Panerai due to its gorgeous sand colored dial and ecru coloured SuperLuminova filled in numerals and hands. Like the PAM00587, this 47mm, light colored Radiomir with its gold-rimmed hands, is a sweet looking reissue of the 6154 and to me the most attractive Panerai from the 2016 collection! 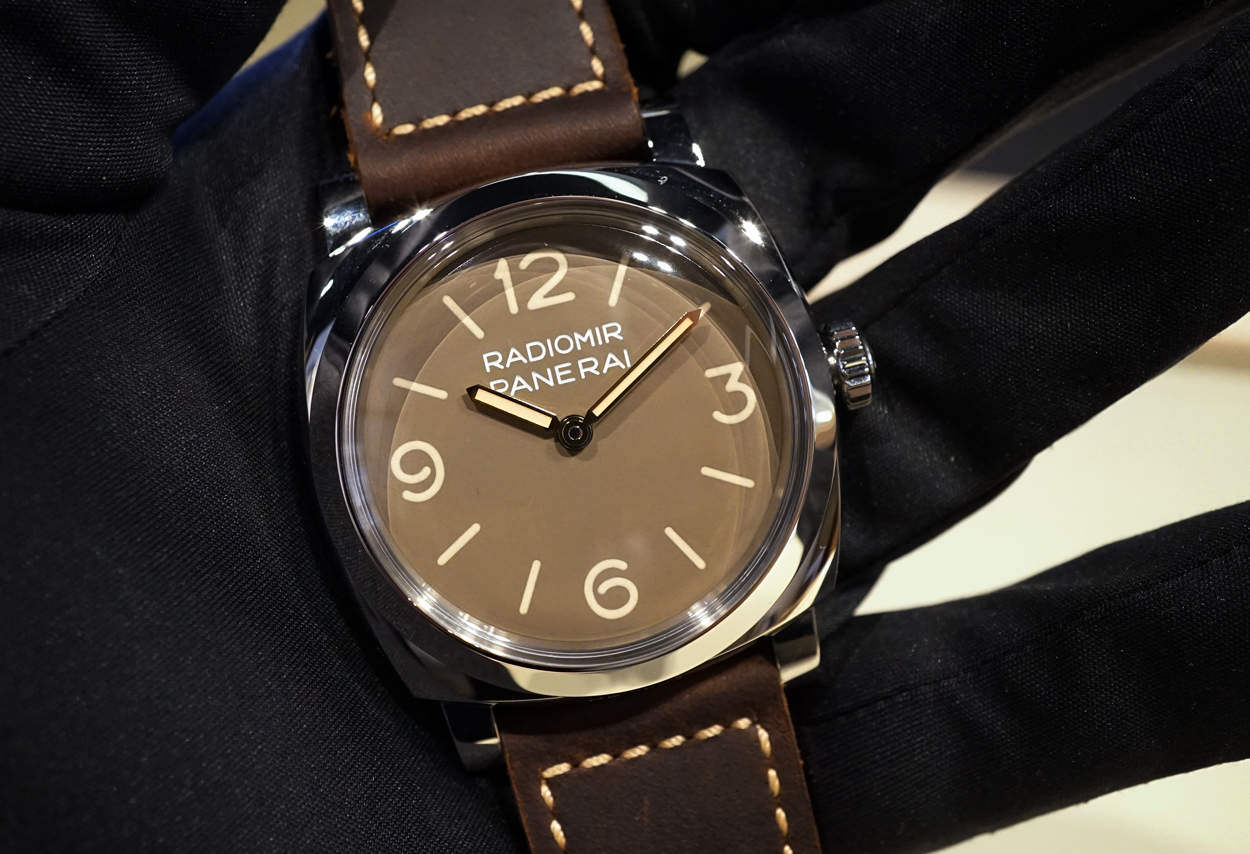 The mechanical in-house caliber P.3000, which is visible through the sapphire back, needs to be wind every three days. 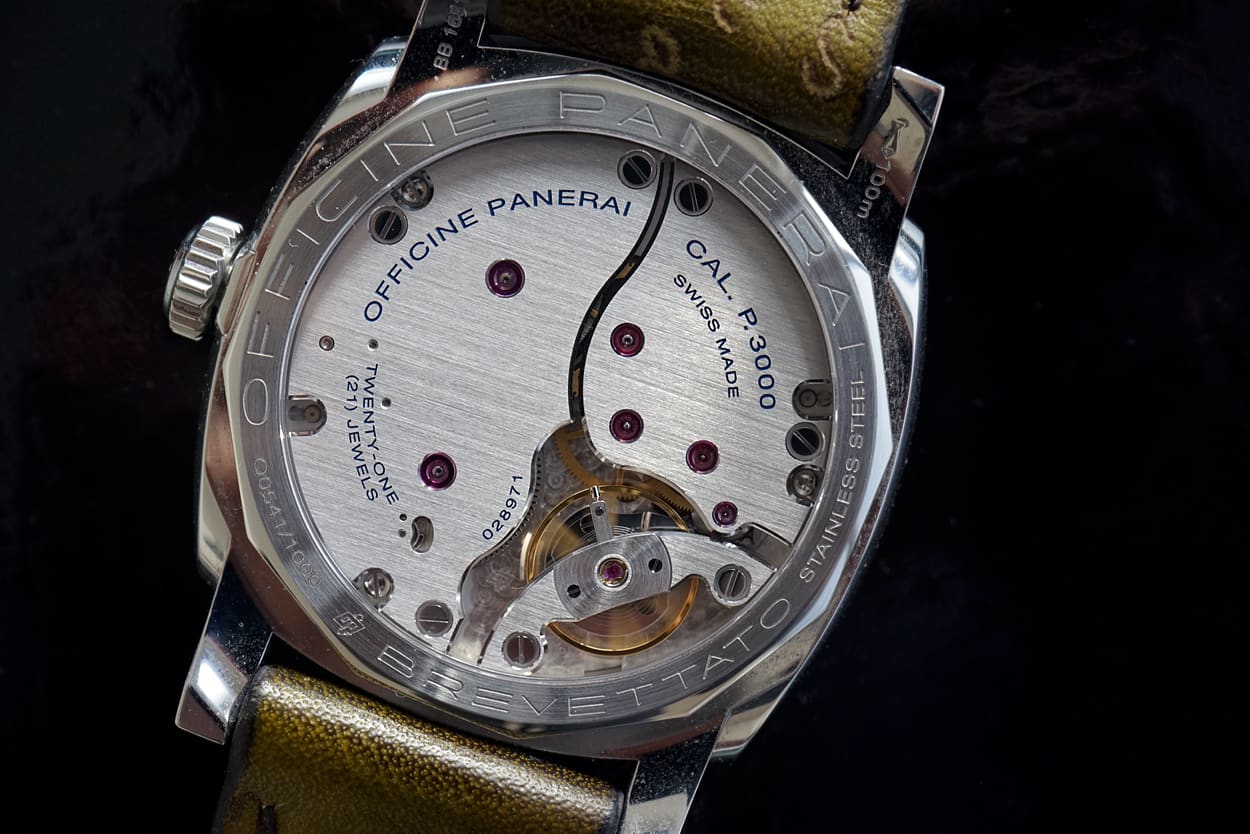 The caliber has the very smart quickset hour feature and that hefty power reserve of 72 hours, thanks to its double spring barrels. When handling the quickset hour feature the crown needs to be pulled one stop and the setting for the hours works in both directions. Very handy when travelling to a different time zone. When pulled out to the second stop, the minutes can be adjusted. But of course one can pass the first stop and go directly to the second and adjust the hours and minutes, the conventional way. 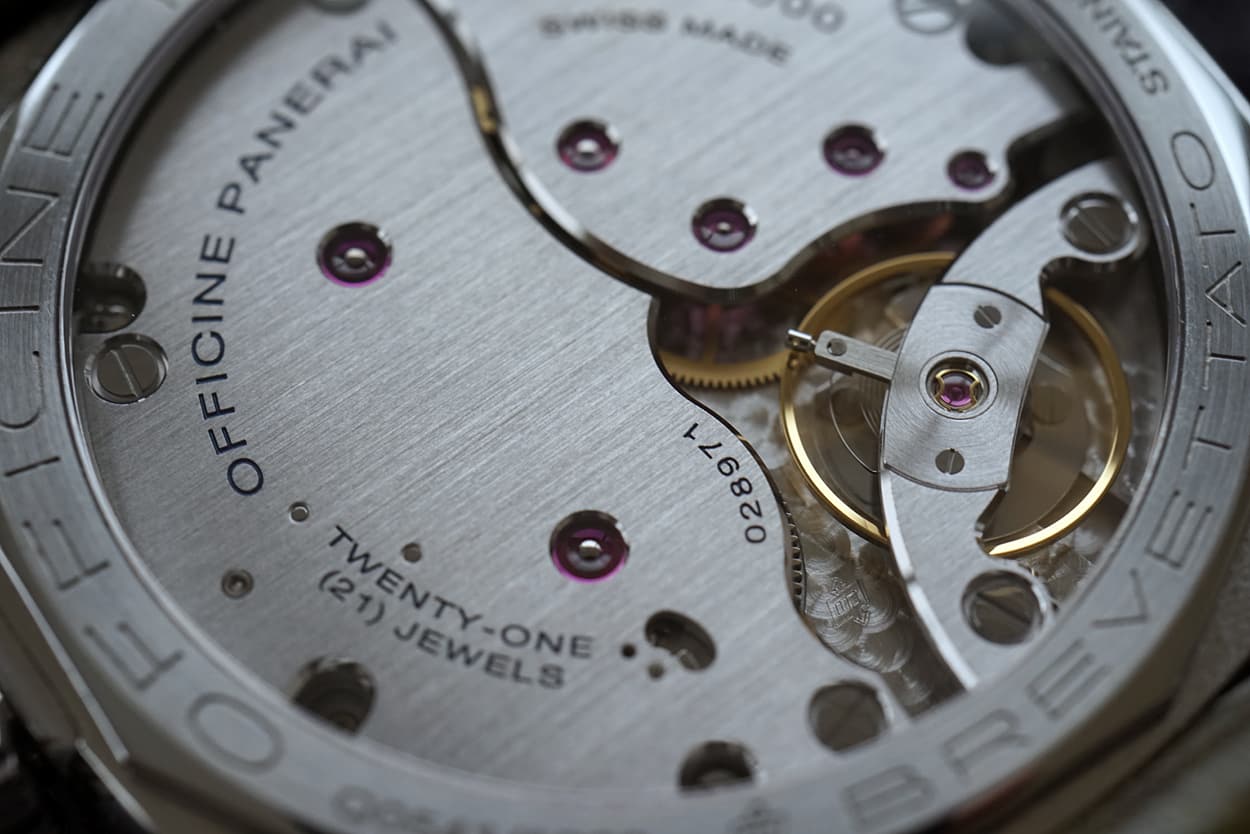 But that’s not all. Next year, actually in only a few weeks time, it will be Panerai’s 20th. birthday as a consumers brand and Panerai will present an amazing new model, that may come as a shock to some, but what is exactly where many Paneristi have been asking for years; a kind of re issue of the 3646, that will be launched as the PAM 00685 and PAM 00687. 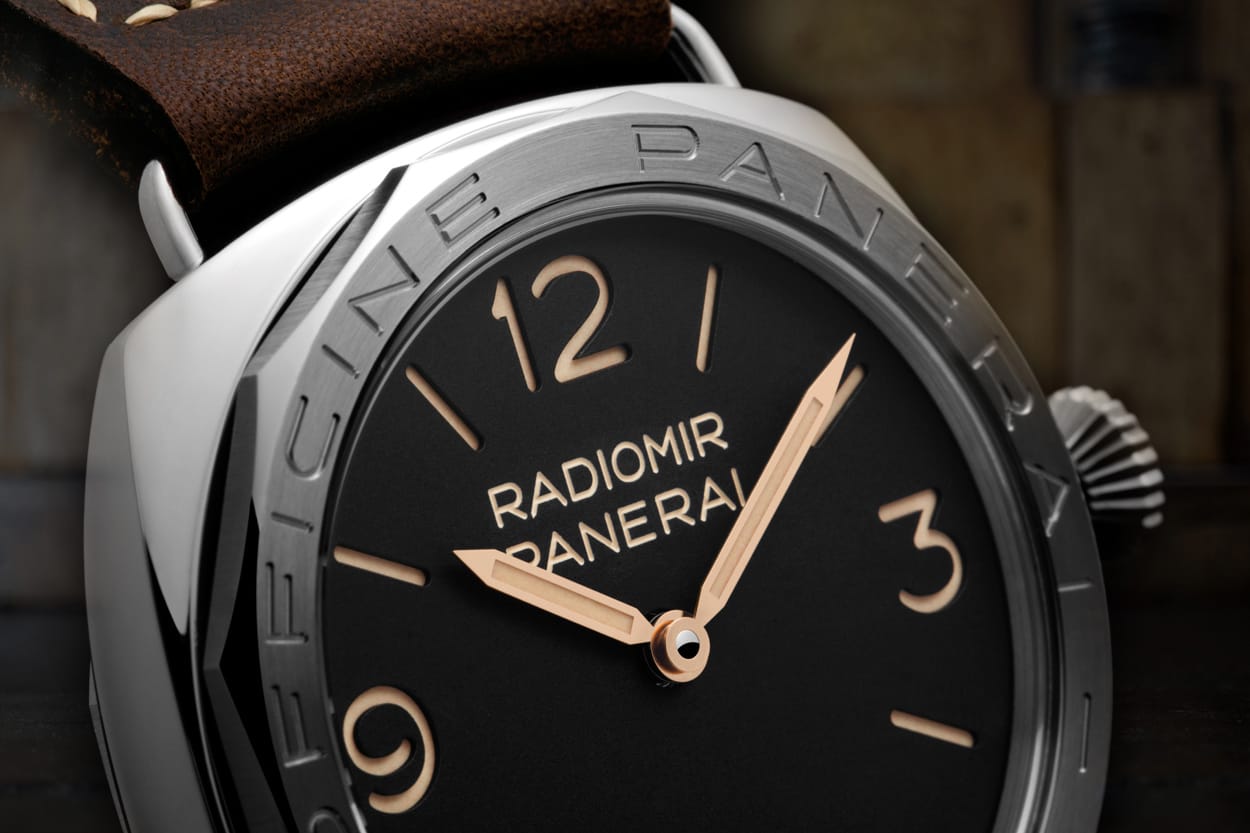 The original model was, at that time supplied with a Rolex 618 caliber, this new duo will also sport Panerai’s own trusty P.3000 caliber  and can be inspected through the large sapphire porthole on the back of the case. New is the 12 sided bezel, with the engraving “Officine Panerai – Brevettato”, a very nice vintage detail that stands for “Panerai Workshop –Patented”. 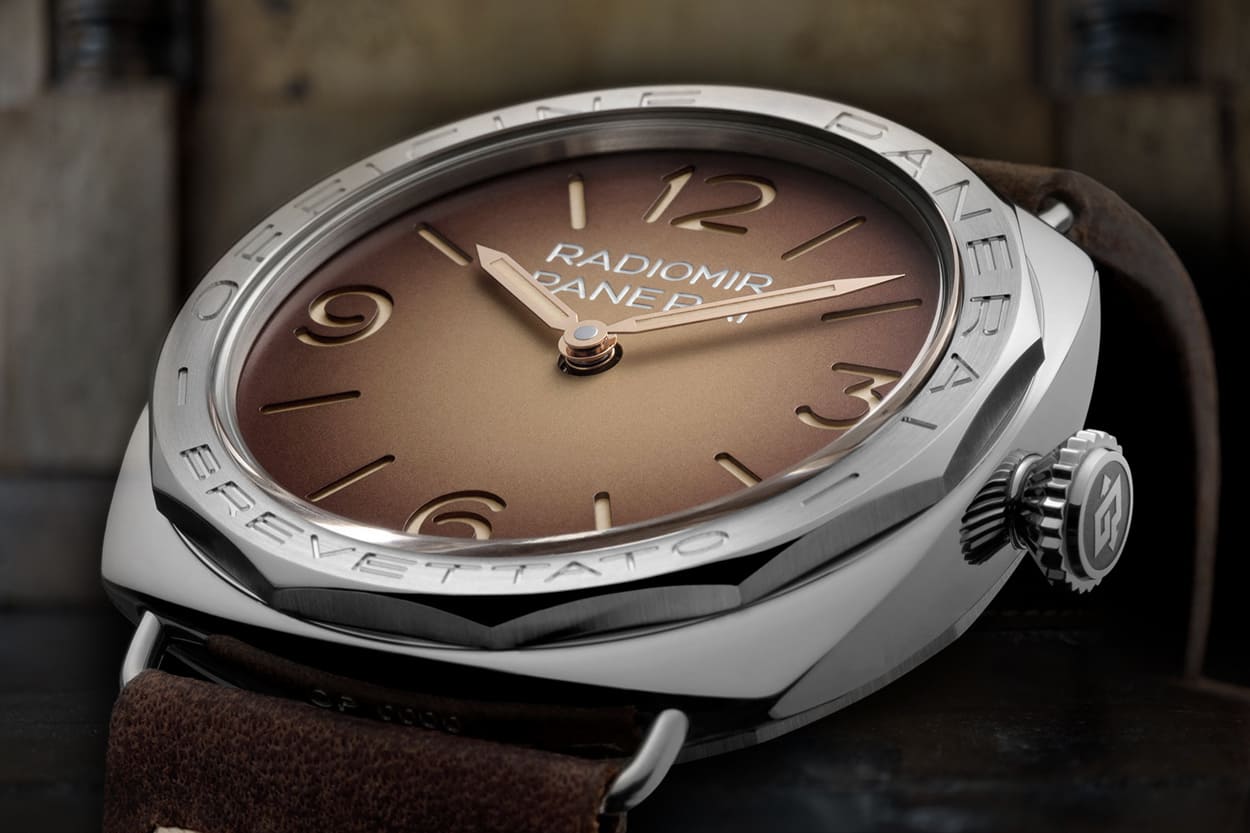 The inscription refers to the patented luminous substance Radiomir used for the dial. It suggests that the watches were not used for military operations but instead it was made for the authorities. In this case, the Royal Italian Navy who were evaluating new instruments for underwater missions.

The dial of the PAM00685 is in black, while the color of the other vintage inspired model, the PAM00687 is in shaded brown. This is a completely new color in the Panerai collections. This very attractive dial color evokes the faded effect, that many of the original watches developed over the years due to the use of the radium based luminous material.

These two watches are stunning re issues of the original 3646 model and will therefor also be launched with a plexi crystal. I know not everyone is in favor of plexi crystals, but when Panerai goes vintage, they really go vintage and produce everything in detail. In the early days the crystal of these watches was made out of polymathy acrylate. But should something happen, there is a second Plexiglas® crystal waiting in the box.

If you want to learn more about Panerai and their new manufacture in Neuchâtel, click here to read our visit report.