And I dare say one of them is a serious contender...
Thomas Stover
comments 33
Share

Oris released a handful of watches today at Geneva Watch Days 2022. Lately, it seems the brand introduces so many new watches that it’s impossible to release them one at a time. I’m not complaining — not at all. The Oris Aquis sees new additions with 36.5mm models with shimmering mother-of-pearl dials. The release I’m most excited about, however, is a new Oris Divers Sixty-Five like we’ve never seen before. The Divers Sixty-Five 12 Hour Calibre 400 makes use of the brand’s top three-hander and a shift in style while staying true to Oris’s Divers Sixty-Five design. Is it a win? I think so.

Oris seems to be on fire this year. In three months, the brand has given us the new ProPilot X Calibre 400 Trio, the Hölstein Edition 2022 “Full Steel” Worldtimer, the Aquis Bi-Co Calibre 400 in steel and gold, the New York Harbor Limited Edition Aquis, the Big Crown Wings of Hope Limited Editions in steel and gold, and a larger size for the cherry-dialed Aquis, among others. Is that enough for you? No? Well, our favorite independent watch company from Hölstein is giving us more. Today, it’s some smaller Aquis models with colorful mother-of-pearl dials and the Divers Sixty-Five 12-Hour Calibre 400. Only Oris knows what the new watch(es) will come tomorrow. 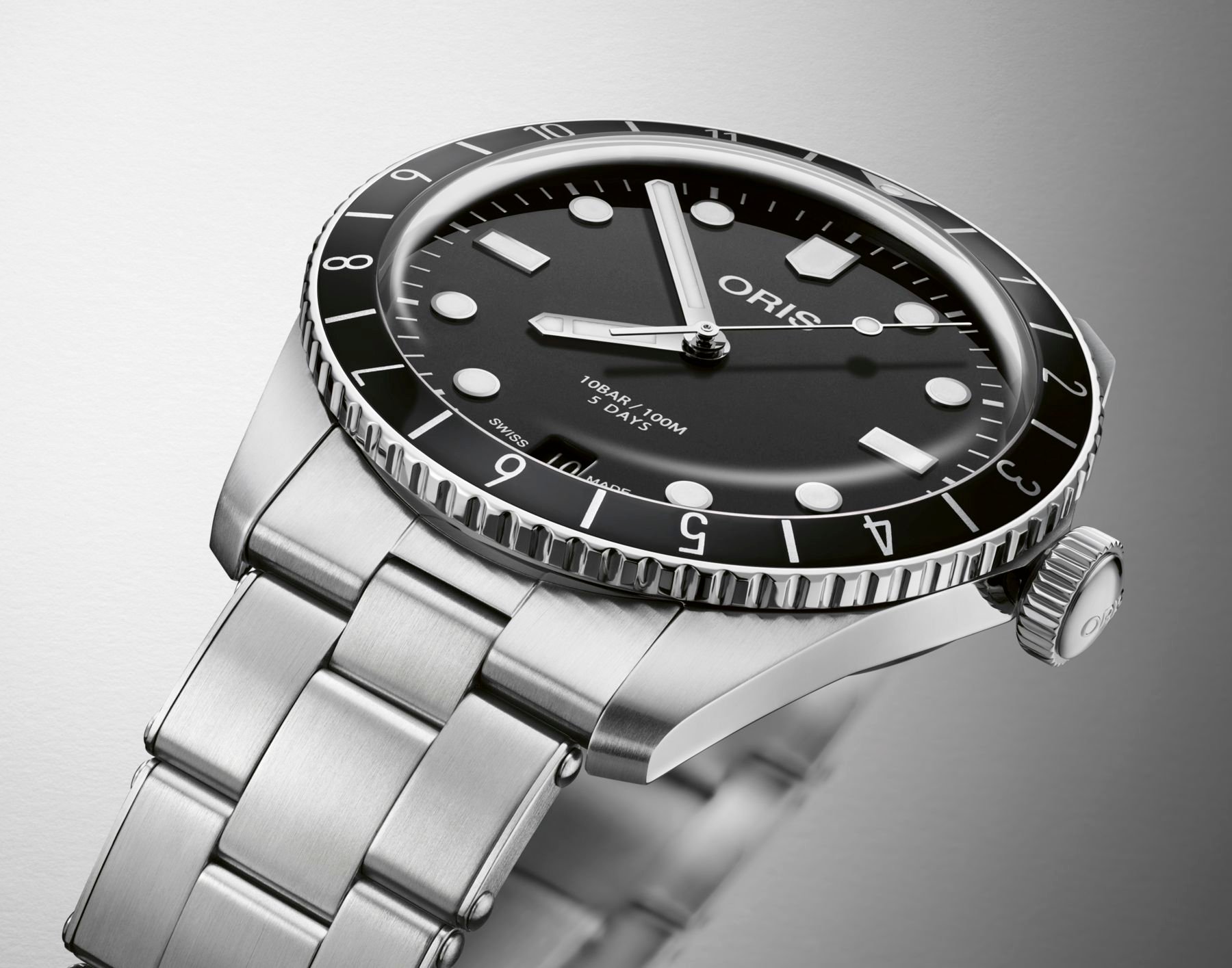 I expect the Calibre 400 to slowly infiltrate all of Oris’s lines, so getting a Divers Sixty-Five with a 400 engine doesn’t necessarily surprise me, even if it excites me. What did surprise me, however, was the new bezel for the Divers Sixty-Five 12 Hour Calibre 400. With this watch, Oris introduces a 12-hour second-timezone bezel to the line. I have to say, for me at least, it’s a win.

No bronze or warm colors are anywhere to be found on this watch. A clean stainless steel case pairs with the black and white dial ornaments and black aluminum bezel insert for an entirely crisp and sober ensemble. This watch comes either on a matching stainless steel bracelet or a black leather strap with complementing white stitching. The Divers Sixty-Five watches are what introduced me to Oris some years ago, but they soon ceased to be my favorite as I discovered the Aquis and other modern watches like the ProPilot line. However, this Divers Sixty-Five 12 Hour Calibre 400 is the Divers Sixty-Five for me. 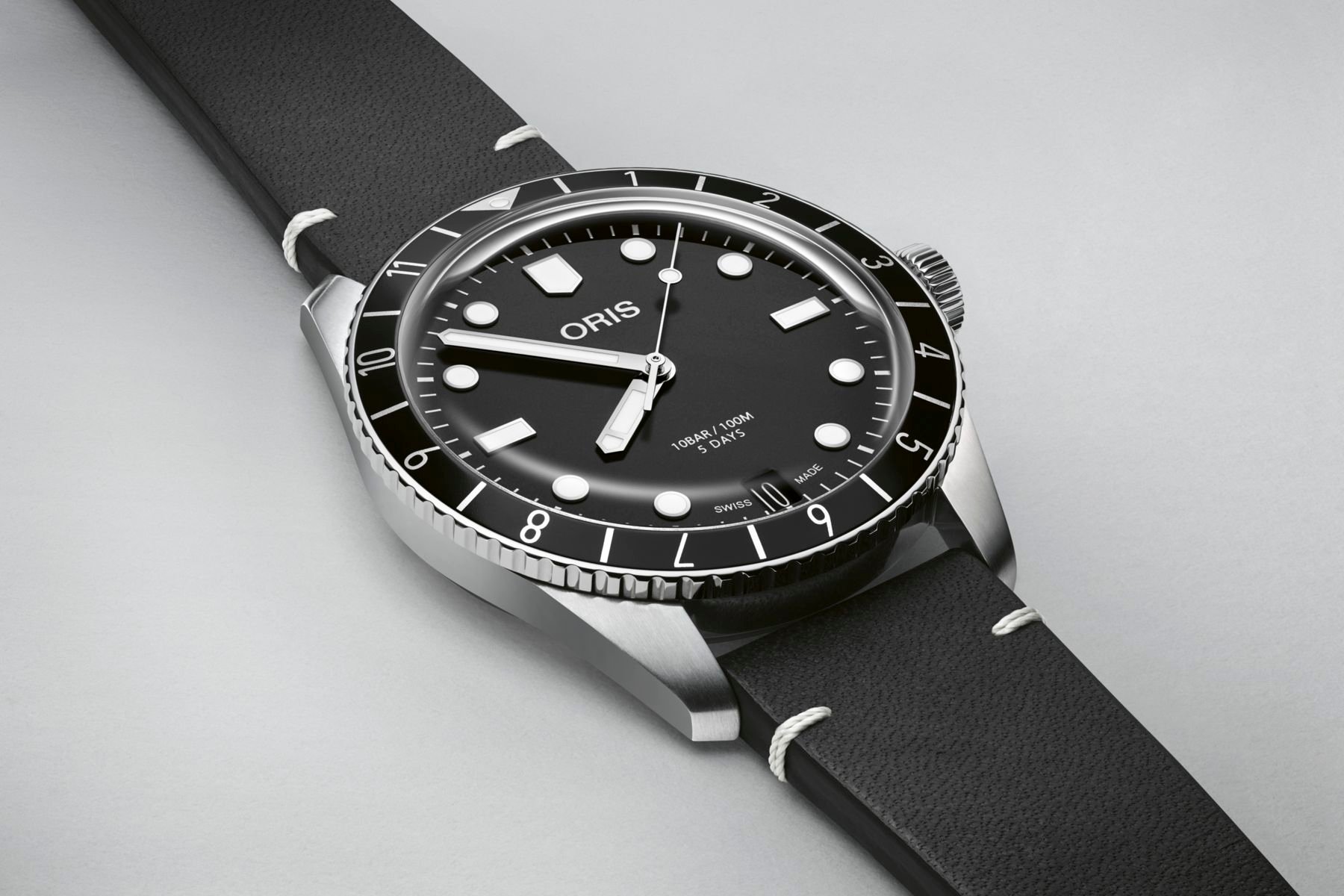 A bezel worth turning

A lot of my attraction to this new watch is the implementation of a 12-hour time zone bezel. It’s a simple enough change, but a notable departure from the skin-diver aesthetic. I’ve never been all that fond of GMTs (I’m a world-timer man myself), but I love a rotating bezel. I also have a need to monitor other time zones (most importantly, Japan, where our copy editor Brandon resides. I can’t be late with him or he’ll send ninjas after me). But I’ve never been keen on a dual-time (or tri-time) watch that required fiddling with a crown to adjust. A rotating 12-hour bezel without a GMT hand is the perfect, carefree compromise. And as much as I love dive bezels, I do not dive, but use them mostly for cooking and parking-meter reminders. A 12-hour bezel can do almost as good a job in those situations. 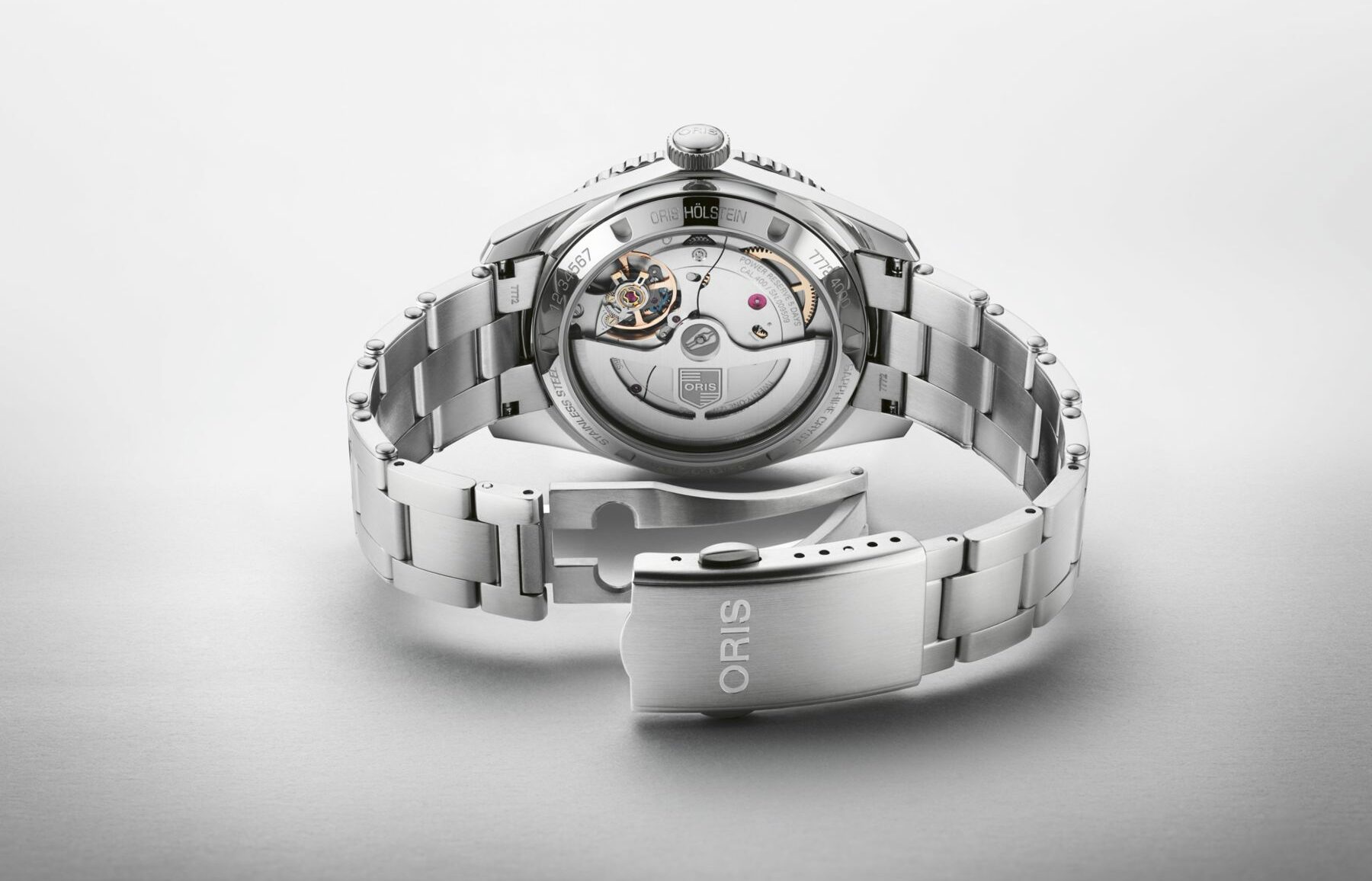 Calibre 400 for a Divers Sixty-Five

Modern looks and functionality like these wouldn’t be fitting for a watch using outdated technology. Oris now gives us an unlimited Divers Sixty-Five with a Calibre 400 in it. The Calibre 400 is a movement I’ve written about lovingly in the past. There’s a lot to love about it too. All of the calibers in the 400 family sport a five-day (120-hour) power reserve, accuracy within COSC specifications, anti-magnetism, and a 10-year recommended service interval and warranty period (a first for the industry). The Calibre 400 is visible through the exhibition case back of the Divers Sixty-Five 12 Hour Calibre 400. It beats at 4Hz (28,800vph). A date function is visible at 6 o’clock on the dial. 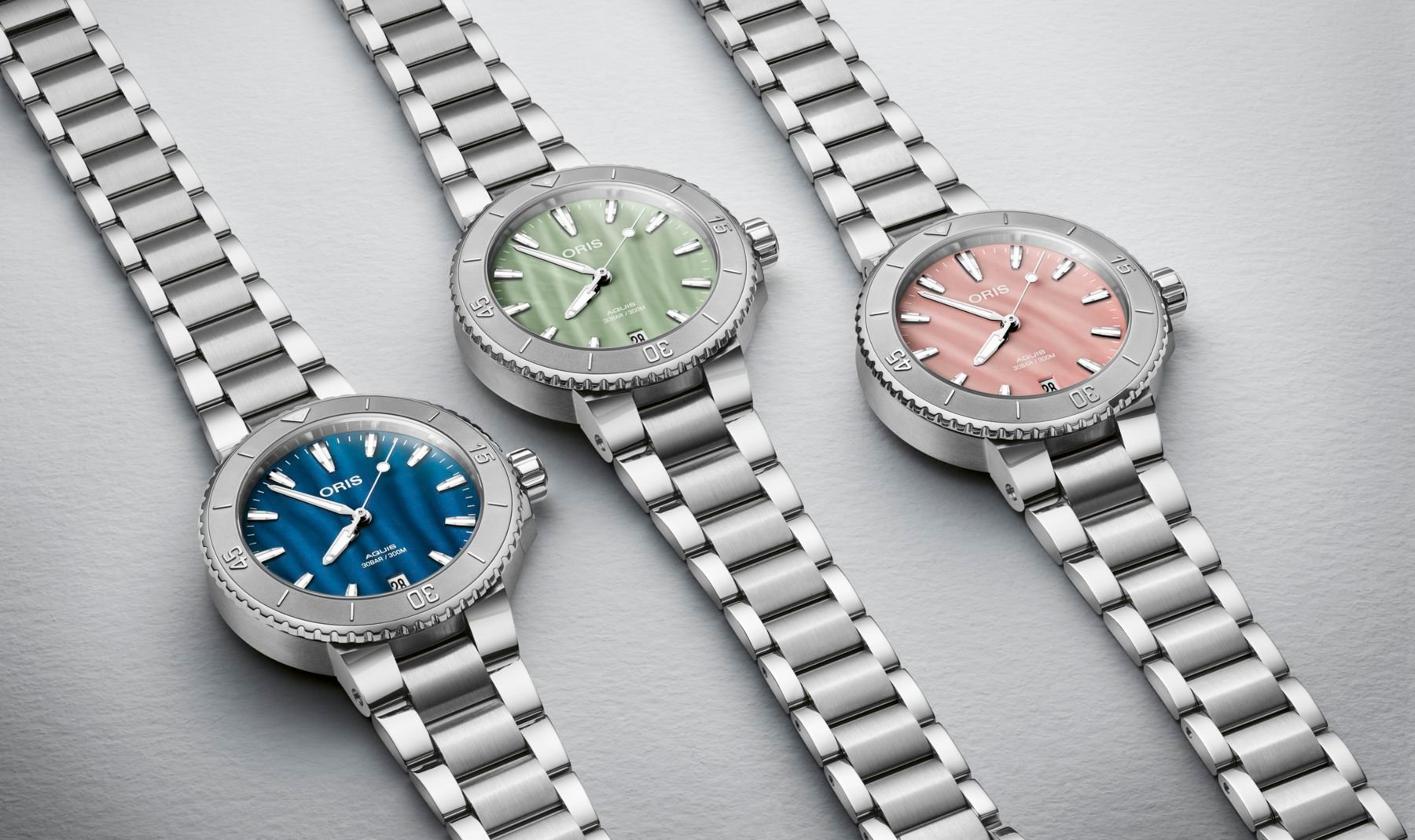 A trio of 36.5mm Aquis Date models with mother-of-pearl dials

Also in this release are three new additions to the Oris Aquis line. With these three 36.5mm Aquis watches, we get two new colored mother-of-pearl (MOP) dials and a return of the beloved green. We first saw this green MOP dial in the New York Harbor Limited Edition Aquis. It’s a stunner. It seems like at least that muted pink MOP dial may be as well. We’ll see when we start getting a look at them “out in the wild”.

Like the New York Harbor Limited Edition, these Aquis watches come with relief-engraved dive bezels. This style is found on a number of other Aquis models too, and it works well to accentuate and frame unique dials like the one in the cherry Aquis. The 36.5mm diameter and MOP dials set these watches up for a feminine market, at least on paper. However, I could see these colors of MOP succeeding in larger sizes for a broader audience. Indeed, it seems the “Blush Pink”, as it’s called, is less flashy than the more coral-colored dial of the ProPilot X. The “Aegean Blue” and “Seafoam Green” could easily go either way.

These watches follow all other Aquis specs, regardless of their diminutive size. The water resistance is a robust 300 meters. A double-domed sapphire crystal with an inner anti-reflective coating protects the dial. Inside is an Oris 733 caliber with trademark red rotor visible through the mineral glass window of the case back. This Sellita-based movement has a power reserve of 38 hours and a frequency of 4Hz (28,800vph). A date window sits at 6 o’clock on the dial as well. All three of these watches come on the standard Aquis stainless steel bracelet with brushed center links. Each costs CHF 2,200. 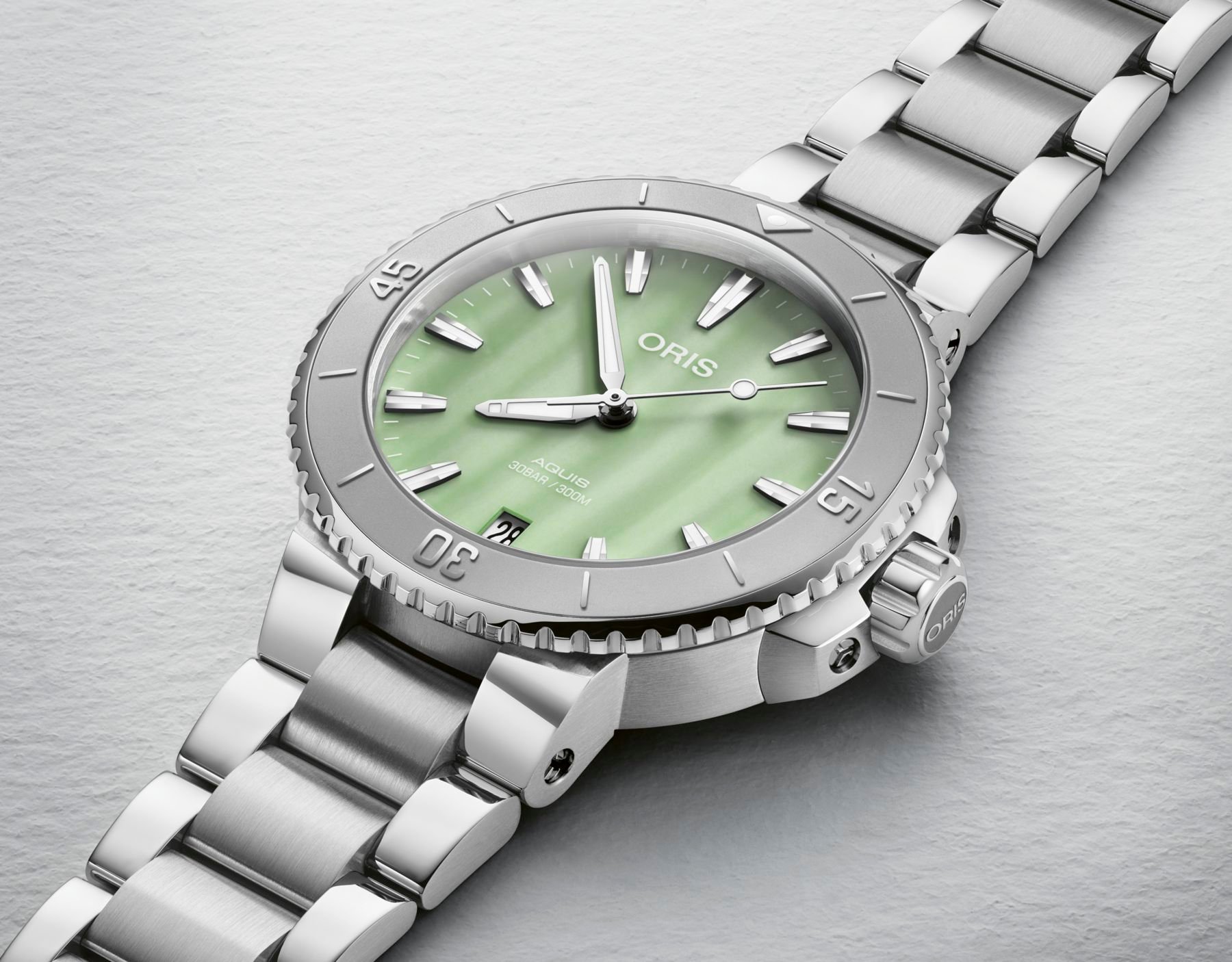 An Oris for every month (or week)

It seems like Oris is releasing something almost every week at this point. I’m digging everything the brand is putting out so far. I’m very much a fan of the new Divers Sixty-Five 12 Hour Calibre 400. It has me seriously questioning my choices for my current watch wish list, including other Oris watches. Time (and a hands-on experience) will tell if it ultimately ends up in my stable. But for now, I can enjoy it for what it is — a refreshingly modern take on a standard(ish) watch design.

What do you think of these new releases or Oris’s recent releases in general? Does the 12-hour bezel on a skin diver work for you? Let us know in the comments. All watches and more information about the brand can be found on the official Oris website.

You can find more of me on Instagram @WatchingThomas