In 2014, we already covered the Speedmaster Apollo-Soyuz and the background of this watch: The Apoll0-Soyuz mission in 1975. 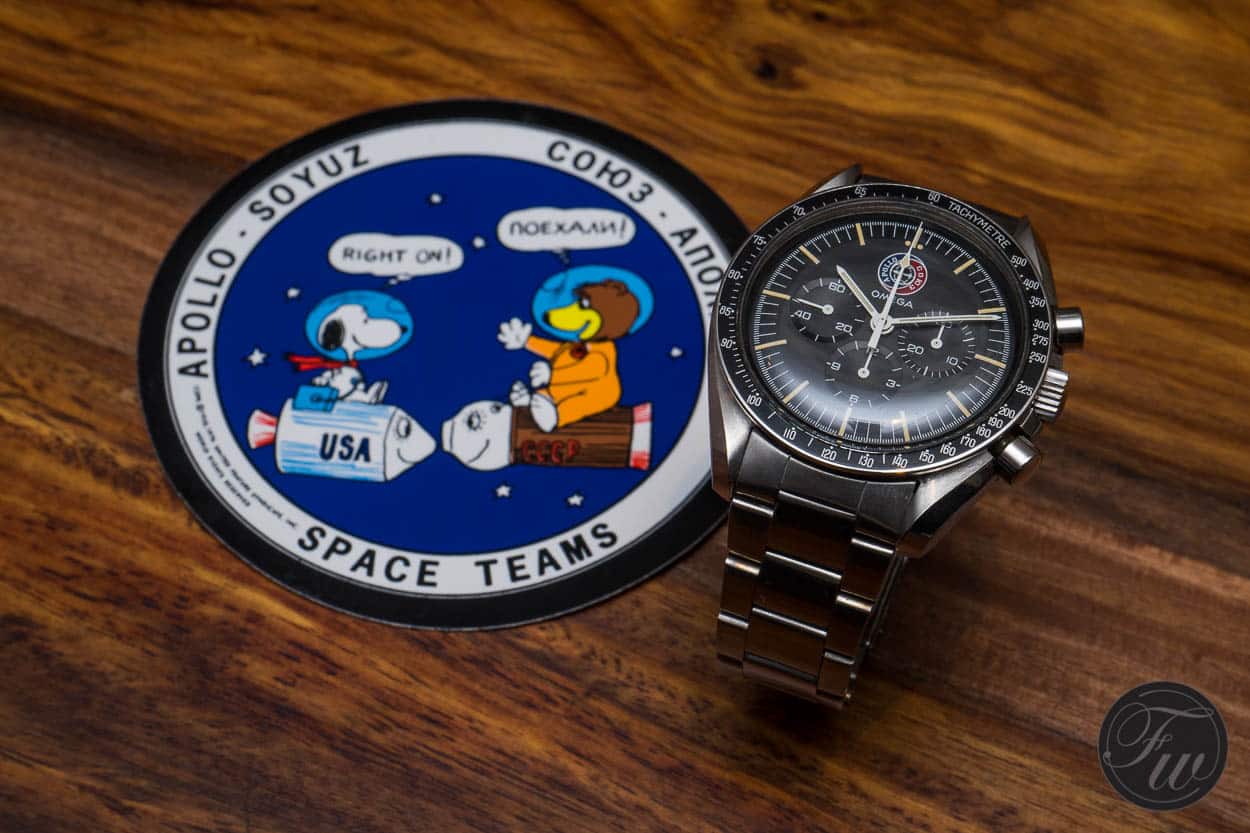 Italy, one year later, in 1976. To commemorate the successful Apollo-Soyuz mission, Italian Omega distributor De Marchi requested a special Speedmaster for their market. For a long time, it was assumed that this batch of Speedmasters consisted of 500 watches. However, according to the Moonwatch Only book (if you don’t have it yet, order it) this number can’t be confirmed. On the original invoice that the authors of the book found, there was an order for 400 pieces. There are some assumptions being done regarding the other possible 100 pieces (assembled by the distributor himself for example), but there is no evidence of this. Below, a copy of the Extract of Records of 2008 (click here to see the process of producing Extract of the Archives today). 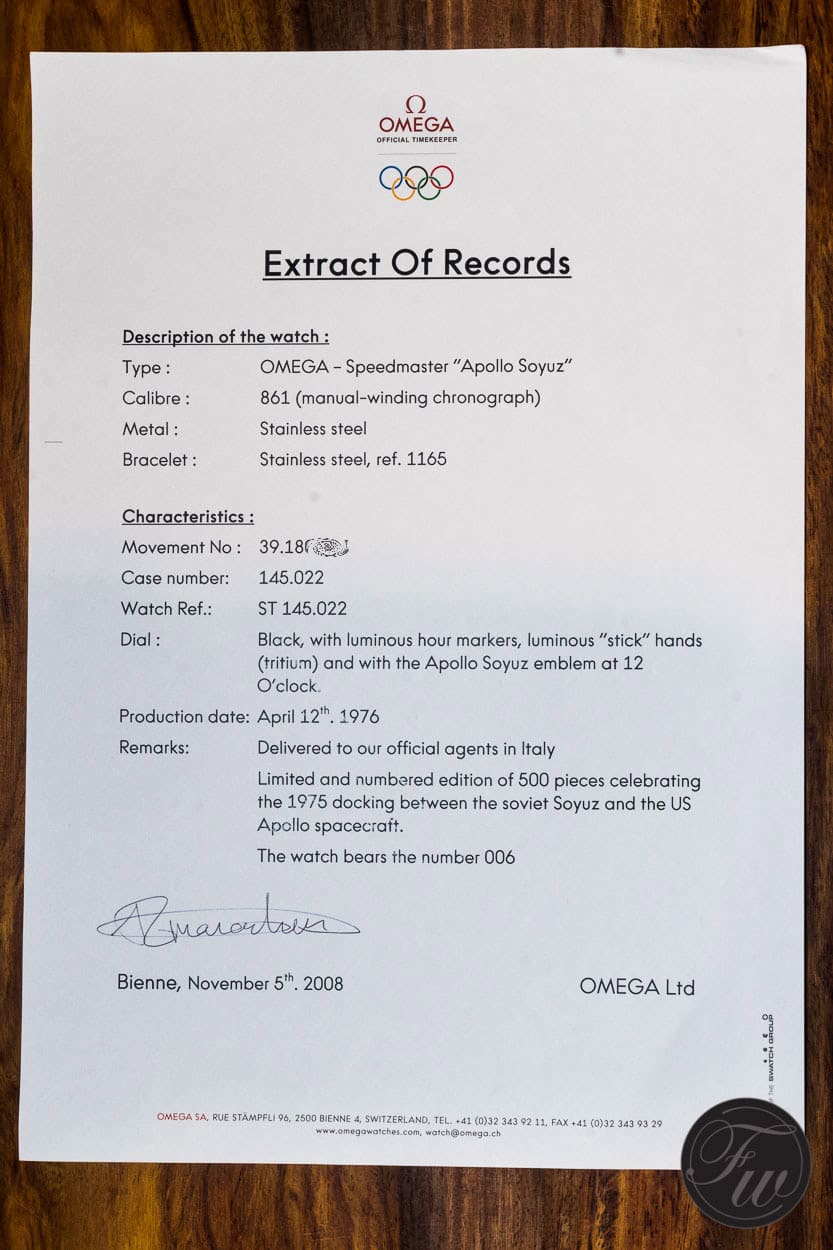 So, here we have the Speedmaster Apollo-Soyuz watch. This exact watch was also featured in the wonderful ‘The Ultimate Speedmaster Exhibition‘ book by Roy & Sacha Davidoff. The watch is based on the regular Speedmaster Professional 145.022 model with caliber 861 movement. There are a couple of note worthy changes though, that I will touch later on. 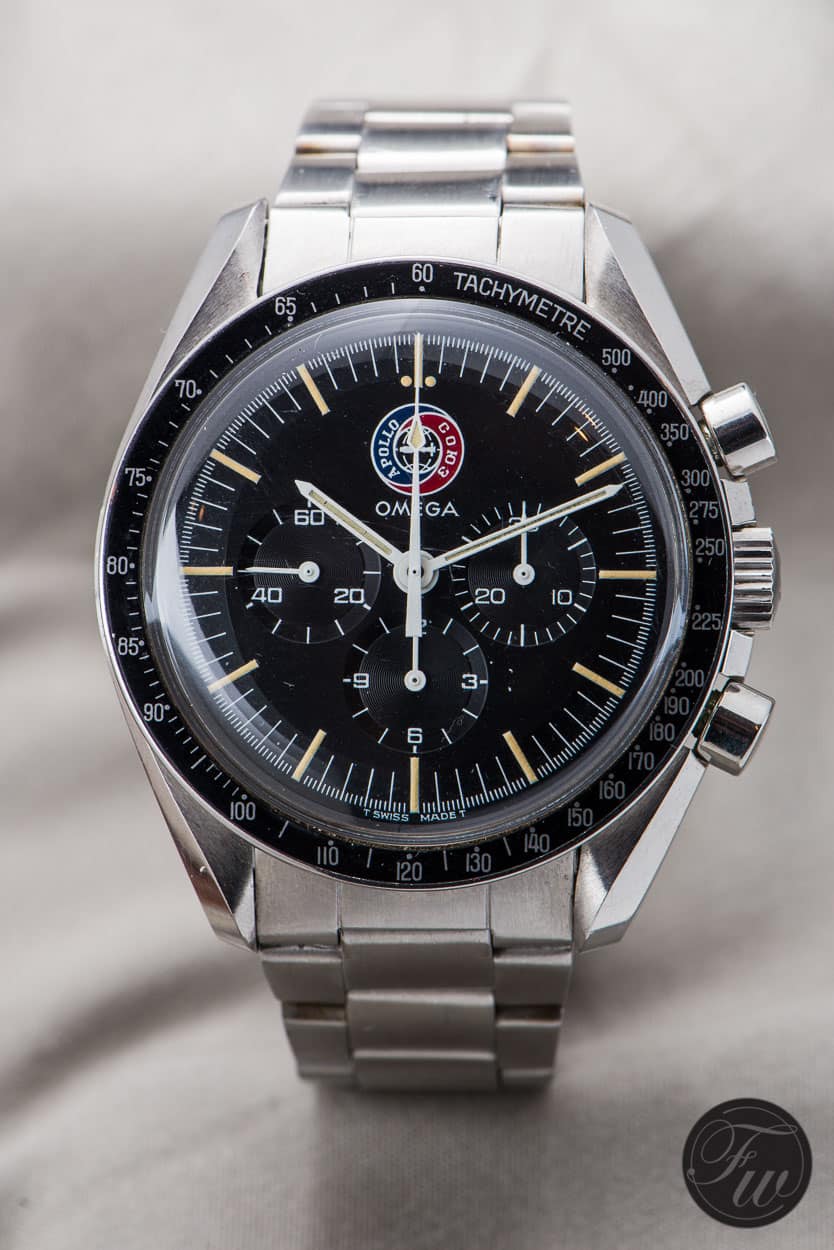 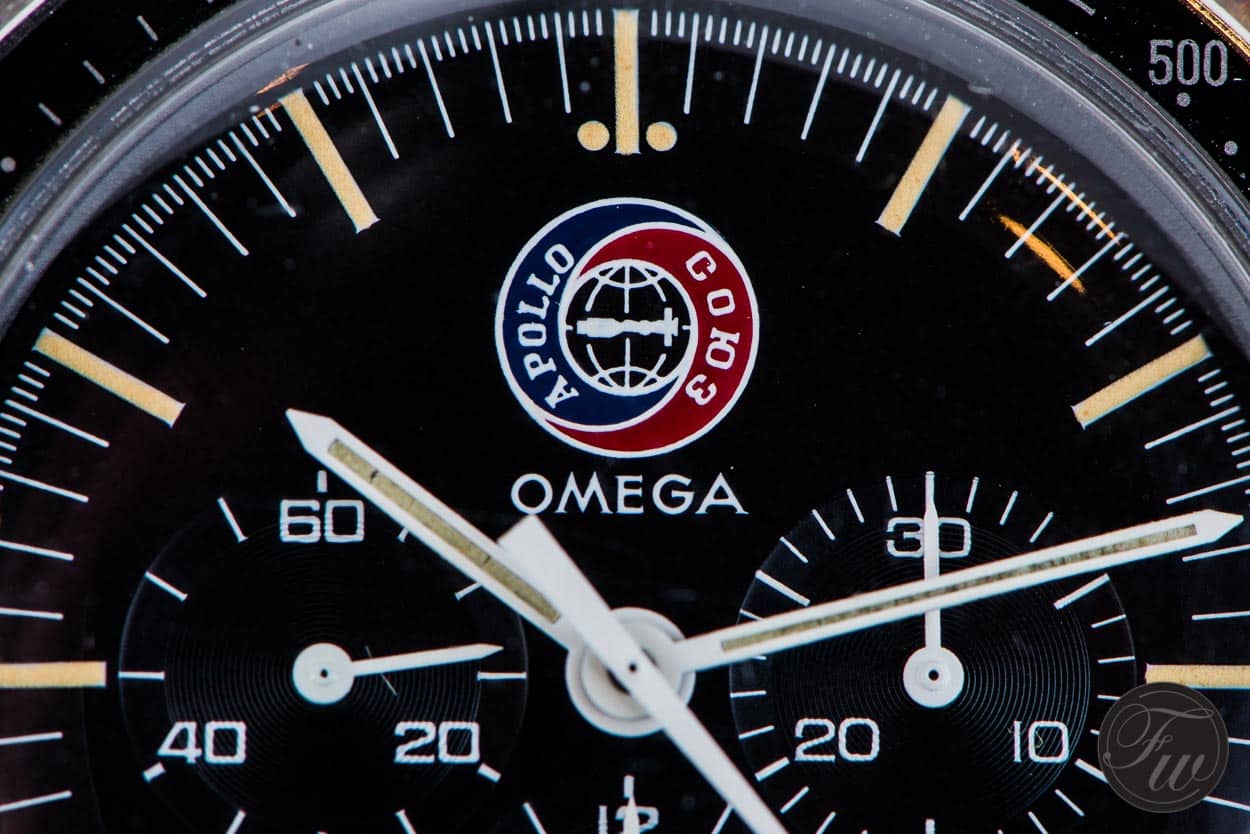 The case of the Speedmaster Apollo-Soyuz is also a tad bit different from the regular 145.022 models. The chronograph pushers have a larger diameter than the normal pushers (5.5mm instead of 5mm). This means that the case band also needed to be modified in order to make the pushers fit. 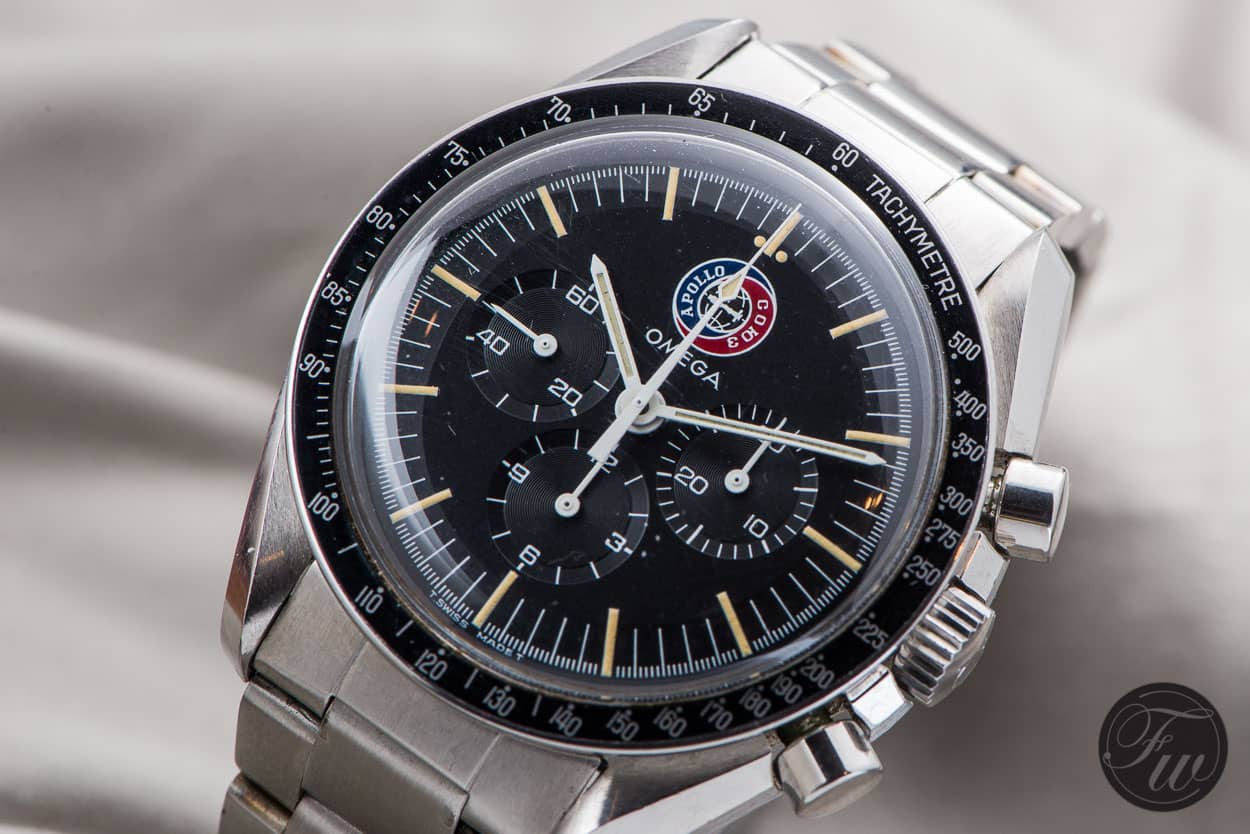 The caseback of the watch is special as well. Instead of the usual markings and “Flight Qualified…” engraving, this one shows the Gemini * Apollo * Soyoz (in Russian) and a bas-relief medallion of the Saturn 1B rocket. Closer inspection also shows an individual number, ‘006’ and an Omega logo. As the image below also shows, the end-pieces of the bracelet are numbered 633. 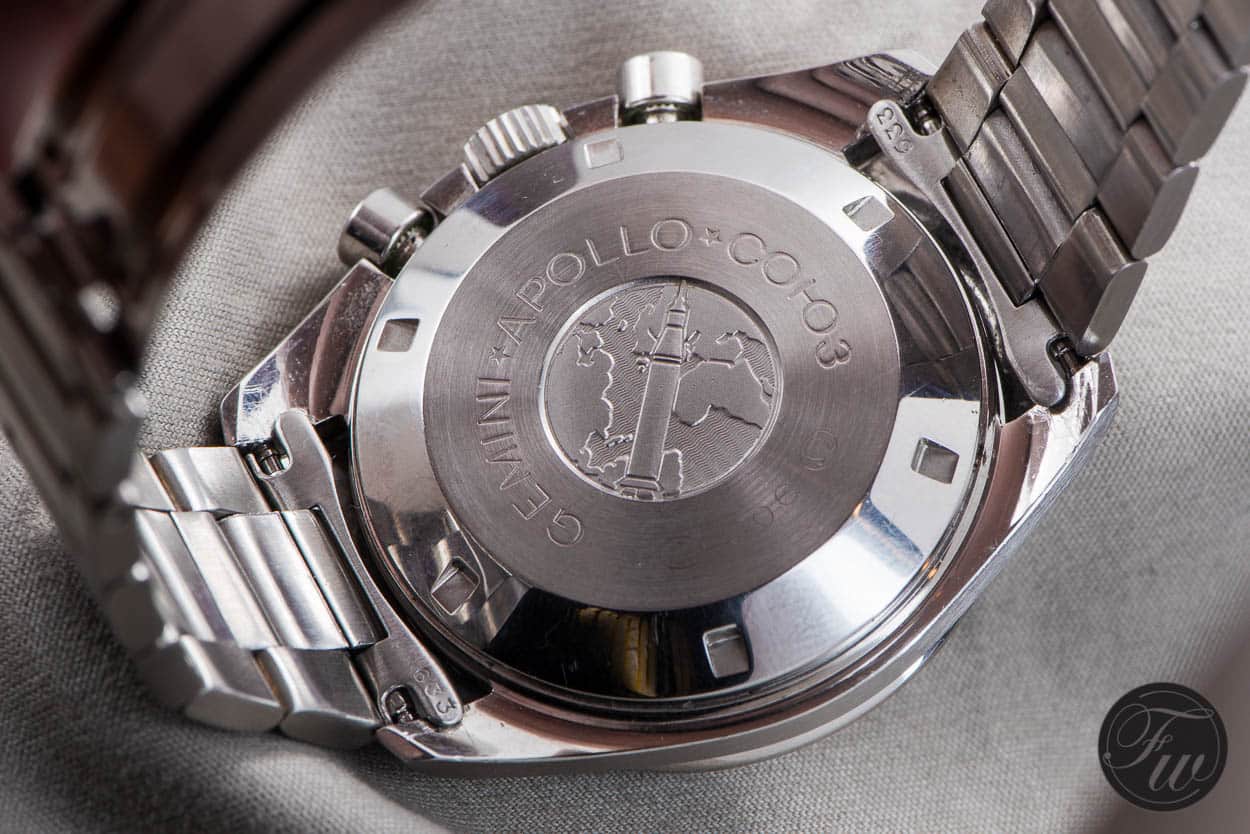 The bracelet on the Speedmaster Apollo-Soyuz was also different from the regular reference 1171 at the time. This bracelet, reference 1168 (and not 1165 as the Extract claims) looks more like the famous Oyster bracelet that Rolex uses. It uses the same end-links as the 1171 bracelet, reference 633, as shown above. It actually looks good in my opinion. 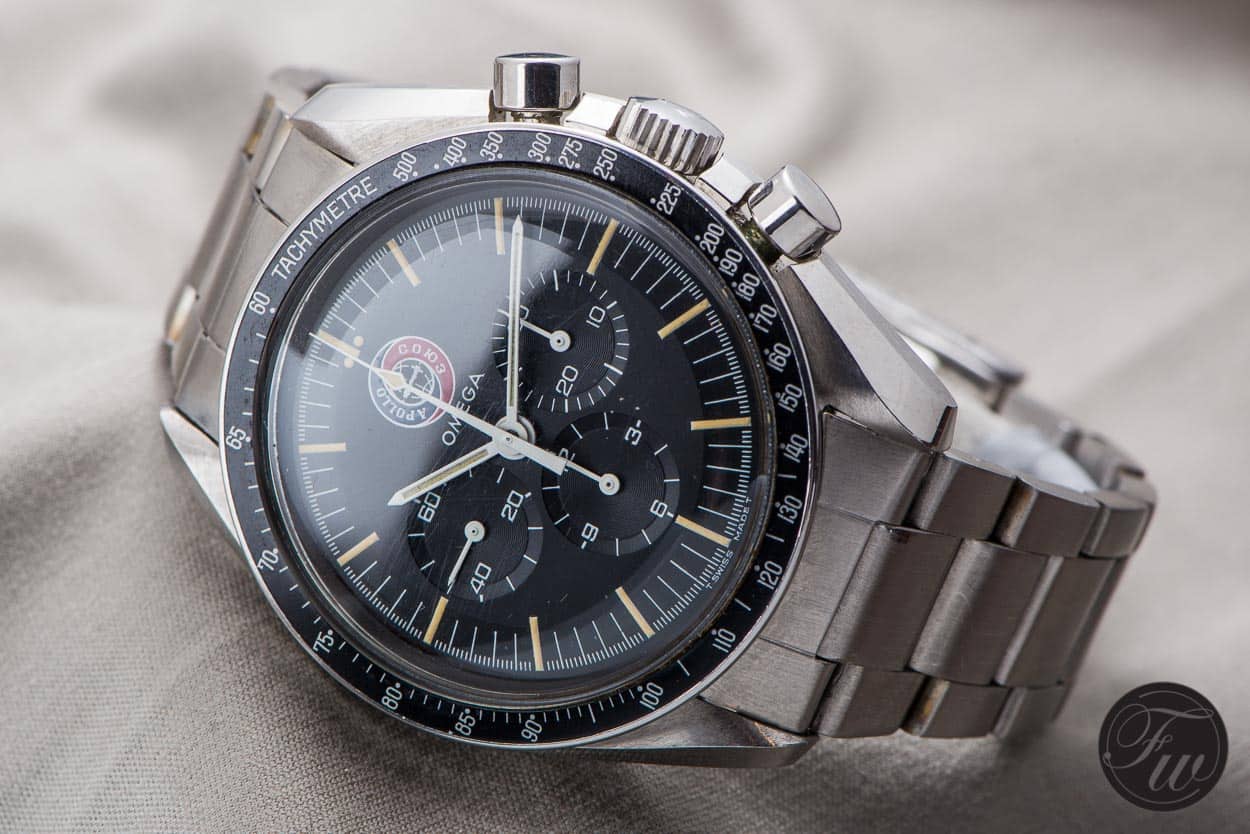 The Omega Speedmaster Apollo-Soyuz was delivered in a box as shown below. Nothing like the huge boxes you receive today with your numbered or limited edition Speedmaster. The papers show the sales date of 24th of August 1981. It is almost unbelievable that this watch sat in a shop for about 5 years. However, I am not sure how big the demand was for mechanical watches in those years. With the quartz crisis and so on, I can imagine that the demand was very low and the collecting community was small. Much smaller than today’s. 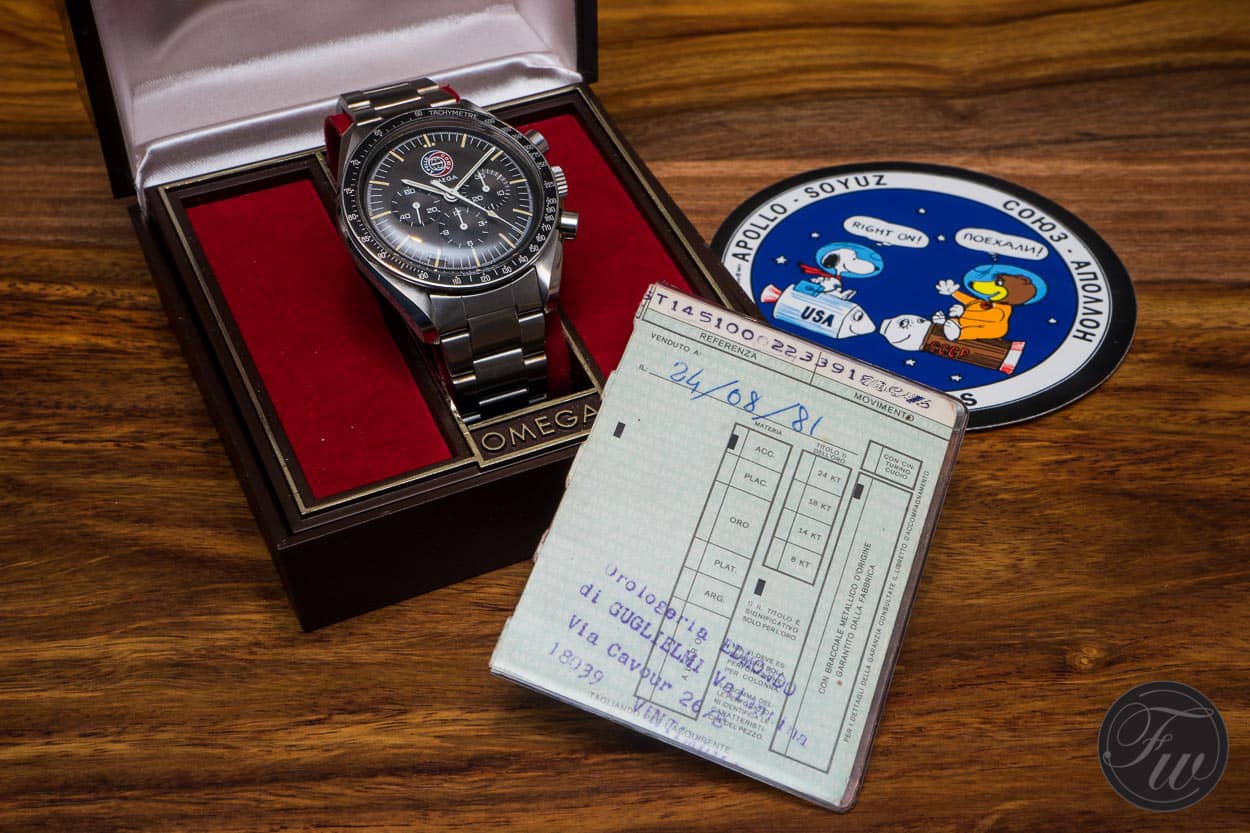 In my early years of collecting, late 1990s, I can only recall having seen one Speedmaster Apollo-Soyuz for sale. In Rotterdam of all places. I think the price was around 10,000 Dutch Guilders, but I am not 100% sure about this.

Chances are very small you will find one for sale other than on auctions or specialist websites. These watches tend to stay in the inner circles of Speedmaster collectors. It is quite difficult to put a price on these watches. It is up to the buyer and seller to come to an agreement, but I expect high prices to be fetched. Especially when complete with box and papers.

It makes me wonder where all 400 pieces went and if they are still all ‘alive’. Perhaps some of them ended up in drawers and haven’t moved since the last 3 decades. With the internet, the market has become quite transparent and people who bought one back then, or inherited it later on, are able to search for value and demand for these quite easily.

Other Apollo-Soyuz commemorative Speedmasters are the one with the meteorite dial (2009) and the gold version from 1995. All the astronauts and former NASA people I’ve seen at Omega events, were wearing these meteorite Apollo – Soyuz watches at some point. Quite amazing.