Just like last year, when Omega actually announced their Speedmaster Moonphase Co-Axial Master Chronometer during SIHH, it is now time to unveil their Speedmaster Automatic Racing Dial. Also equipped with a Co-Axial Master Chronometer (caliber 9900) movement, of course. While Omega some times still refer to these Co-Axial 44.25mm models as ‘Moonwatch’, they luckily didn’t do so with this model. This is a racing dial edition, very true to the origin of the Speedmaster and a theme that has been used a couple of times over the years.

Origin of the racing dial

The first racing dial used by Omega for their Speedmaster was in 1967. Although the Speedmaster was advertised with motor sports in the late 1950s, focused shifted quickly to the Moon program. However, in 1967 Omega decided to apply the ‘racing’ pattern to the Speedmaster dial. The official Omega press release talks about 1968, but the extract of the archives belonging to the reference 105.012 below, leaves no room for interpretation. This particular watch has been covered in-depth in this article, including an image of the extract.

Besides those very first racing dials in the caliber 321 models, Omega used the racing dial again in the later caliber 861 models between 1969 and 1971. The use of colors changed a bit once in a while, so you’ll see various combinations of red, white and orange on these dials. You will also see that some times the chronograph hands are painted, other times the ‘regular’ hands are painted. Below a caliber 861 Speedmaster Professional 145.022 with racing dial (we talked about it here).

Besides the Speedmaster Professional, the Speedmaster Mark II also came with a racing dial. The reference 145.014 racing dial is the most sought-after version of the Mark II. Michael covered his Mark II restoration project in this article, not too long ago. A watch with a 1960s/1970s case design, inspired by the very first Alaska Project by Omega. 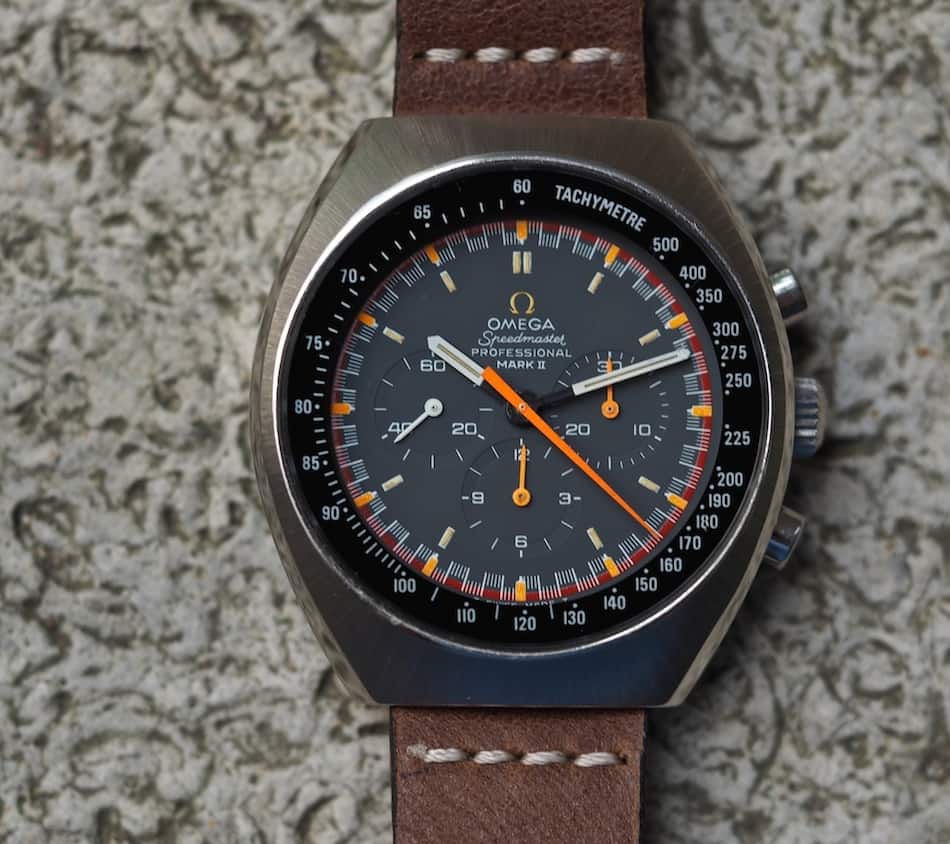 Through the years, Omega made more racing dials, also in their Automatic versions. ‘Schumacher’ editions were hot at some point and even those received the ‘racing’ treatment. Besides the very rare piece below, made for the Ferrari team during Schumacher’s F1 years, you can find a couple of racing tributes in the Reduced and Broad Arrow series.

In 2004, Omega made the ‘original’ racing dial return in the Speedmaster Professional. Limited to 2004 pieces only, for the Japan market. A huge fan base of the Speedmaster is located in Japan, who showed their love for the Speedmaster several times with the Ultraman and Speedmaster 125 on TV and had their own Mitsukoshi (departmentstore) edition of 300 pieces. But I am ‘drifting’. The Speedmaster Pro Japan Racing was popular beyond believe and in the last couple of years the prices of these watches on the pre-owned market saw interesting increases.

In 2013, Omega did yet another Racing version of the Speedmaster Professional, but we found out it was actually made for Hergé’s Tintin and soon was dubbed ‘Tintin’. The pattern is slightly different to the original racing one and the one from 2004, but Omega at least tried to market it as such. It is now discontinued and loved by many collectors. Here’s more to the story.

Last but not least before we come to the BaselWorld 2017 Speedmaster Automatic Racing Dial model, in 2014, Omega also introduced a re-edition of the Speedmaster Mark II. This time with automatic Co-Axial movement. It has an awesome brushed case like the original Mark II and comes with the racing dial as well. See below. All chronograph hands are orange and the racing pattern on the minute track is similar to the vintage models.

Back to the announced model, the Omega Speedmaster Automatic Racing Dial. Based on the Speedmaster Caliber 9300, also available in various ceramic editions, but today with a caliber 9900 movement. Certified by the independent METAS institute, as explained here.

But there is more to it. 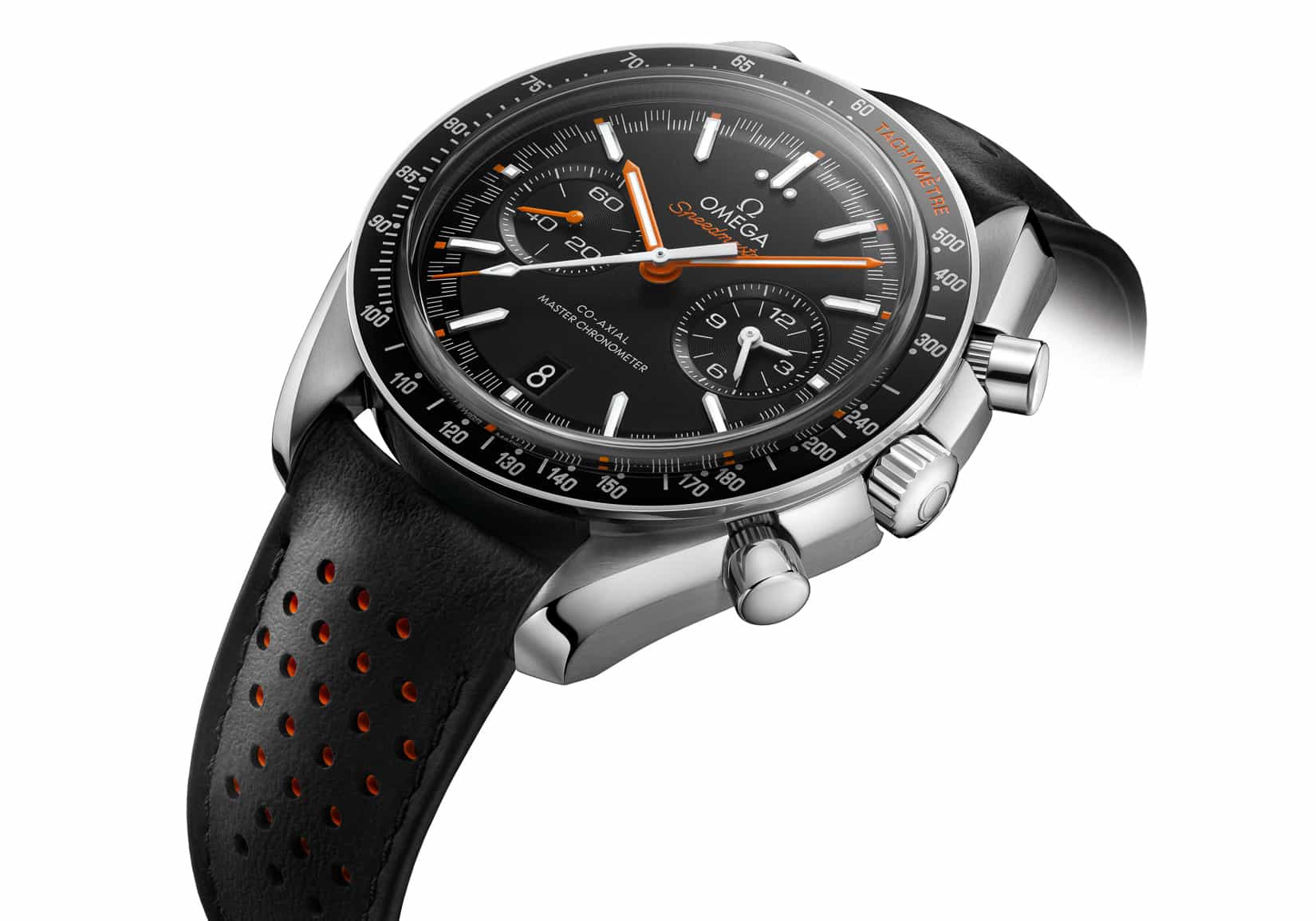 Some people complained that the 44.25 Speedmaster caliber 9300 models were a bit too thick. Not as thick as the 45mm Seamaster Planet Ocean with the same movement family, buy still quite substantial. This new Speedmaster Automatic is thinner, mainly due to the work Omega did on the sapphire crystal. Watches using the caliber 9300/9900 family need a bit of a thick case, but the boxed sapphires used on the other models made them even thicker. 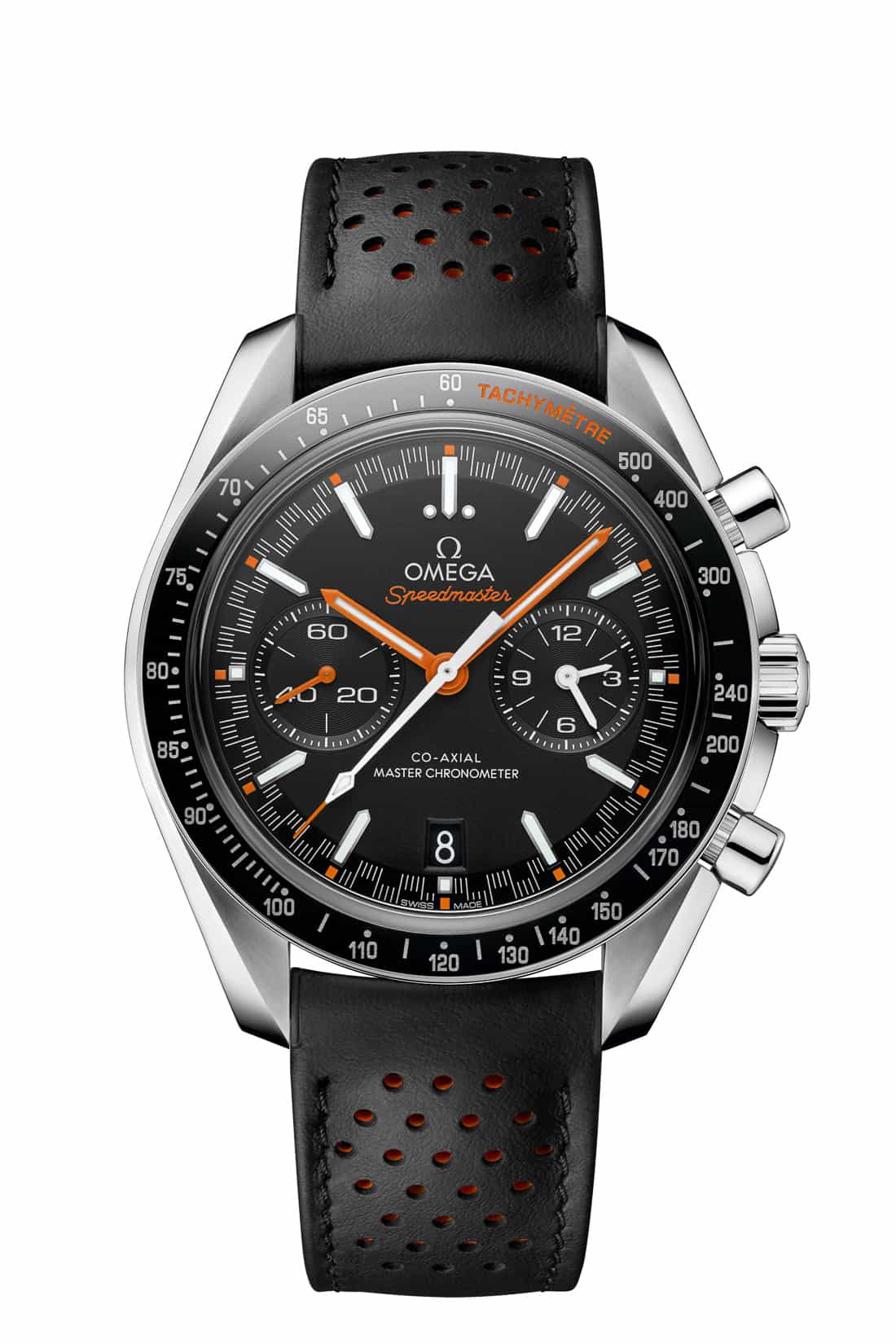 Other neat features include a ceramic bezel with LiquidMetal tachy scale.”Tachymètre” wording in orange, to match the minute markers and ‘time indicating’ hands. The Speedmaster Automatic Racing Dial has white chronograph hands, like the original 105.012 with racing dial we showed you in the beginning of this article. Very cool. The sub dials on this piece are a tad bit bigger than on the other in-house chronograph Speedmaster models. The matte black dial is just stunning in our opinion.

Another cool feature is the racing strap. One that really fits to the racing theme with its perforations and comes with a folding clasp. 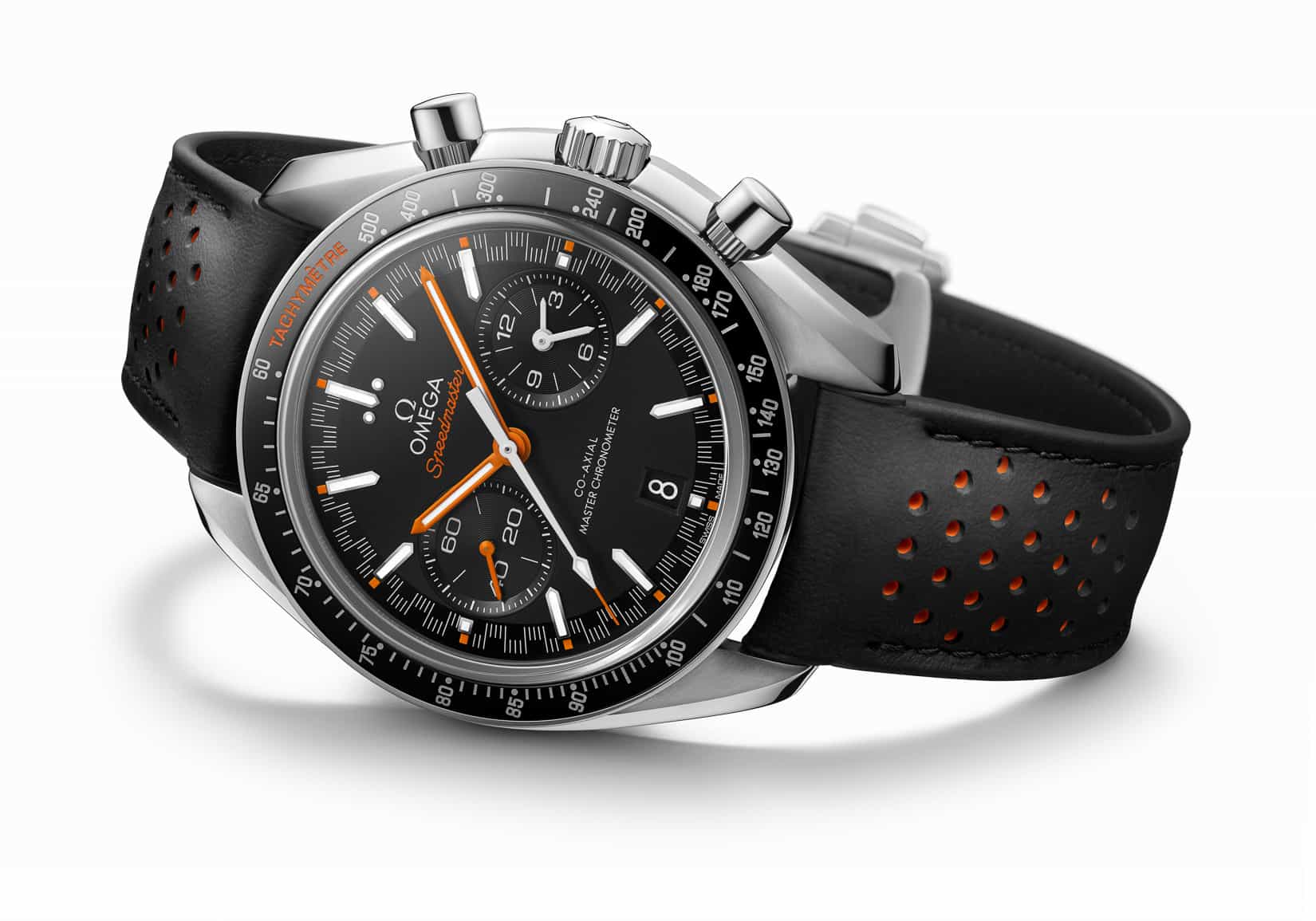 Hot Topics
Introducing: The Omega Speedmaster Super Racing With Spirate System
165 comments
Design Vs. Specs — Which Is More Important To You When Buying A Watch?
86 comments
My Predictions For New Omega Speedmasters In 2023
54 comments
The Time To Buy Is Now: How The Current Economic Climate Influences Watch Buying And How You Should React
51 comments
A Regret-Free Guide To Buying Your First Luxury Watch — Part Three: Higher-End Options From Omega, Rolex, Grand Seiko, And More
48 comments
Popular
Top 10 Rolex Watches – Overview of Models Favoured By Our Readers
Fratello
25
Two Patek Philippe Nautilus Watches: 3700/1A Versus 5711/1A
Robert-Jan Broer
16
Hands-On With The Seiko SLA019J1 Marinemaster
Robert-Jan Broer
4