The year 2020 has been tough on James Bond fans. It was a tough pill to swallow when No Time To Die was postponed for a second time. Like so many, I was more than ready to see Daniel Craig in action one last time as 007. And just when you thought things could not get any worse, the news came in on the 1st of November that Sean Connery passed away at age 90. The Scottish actor was the first and, to many, the best James Bond. In the light of Connery’s passing, we decided to create a list of our 7 favorite Bond watches.

Discussing a list of Bond watches is as much fun as it is incomplete. Sure, you could cough up all the watches we have seen in 25 official Bond films, but that would not start a discussion. Not all of them have the same relevance or iconic status. As such, we have come up with a list of seven iconic Bond watches. But feel free to get in on the discussion and state your favorites. We can never talk enough about James Bond and his watches, especially after losing the first and best 007 there has ever been. 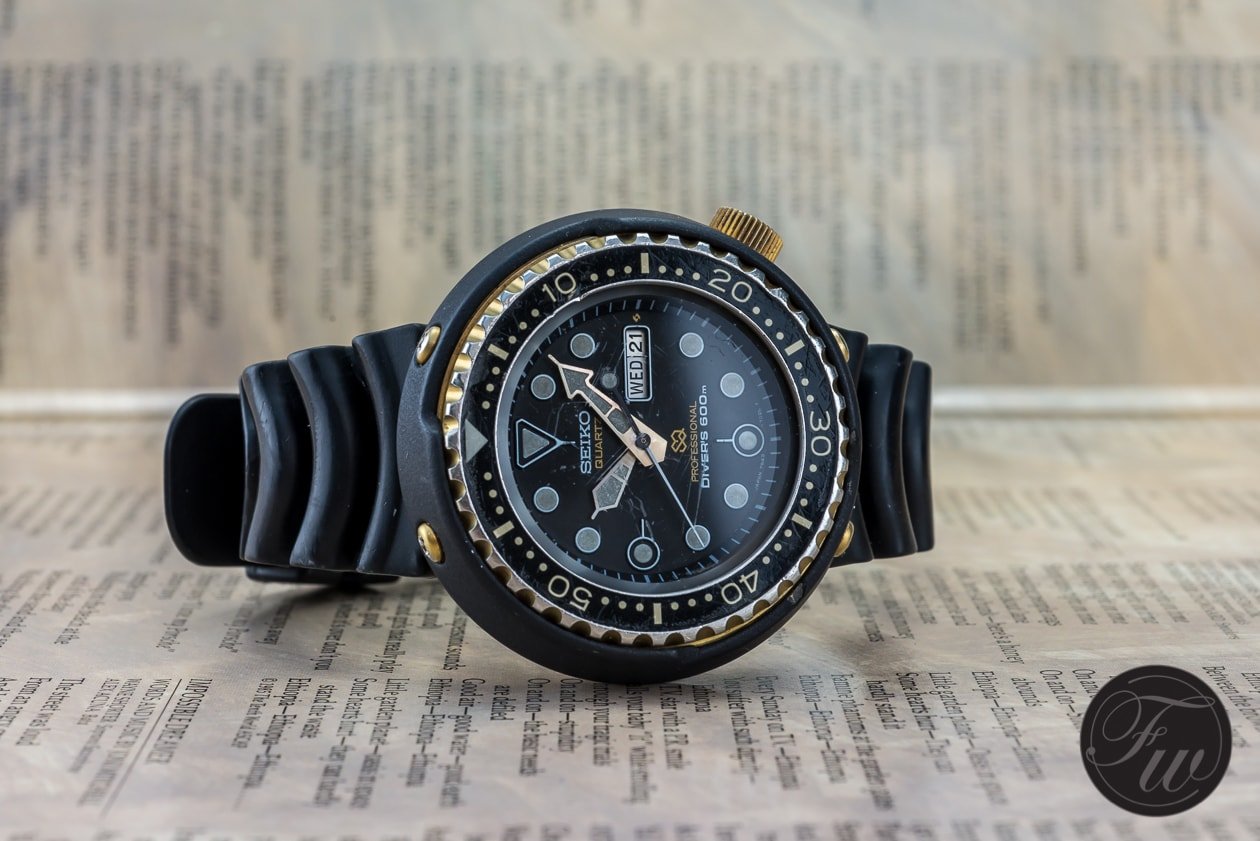 After Rolex had become Bond’s watch of choice, Roger Moore introduced us to James Bond wearing Seiko watches. In several Bond films, he can be seen wearing Seiko watches that feature some of the craziest gadgets. Although these fit the overall Bond gadgetry perfectly, there is not one Seiko in all those films that comes close to the overall iconic status of the Seiko 7549-7009, also known as the “Golden Tuna.”

In 1981’s For Your Eyes Only, Bond can be seen wearing the watch over his yellow diving suit during the dive in the yellow submarine to the St. Georges wreck. The funny thing is that the Golden Tuna has often been overlooked as an important Bond watch. This is understandable because the watch can only be seen in one scene in the film. On top of that, it is not featured in a close-up like the other Seikos featured in Bond films.

Bond didn’t need it to be a gadget but a divers’ watch.

Why is this more relevant than the other Seiko watches that Bond wears? The provenance of the Seiko Tunas as hardcore divers’ watches and the Golden Tuna is well known. Gerard dedicated a great overview article on the topic. On top of that, the idea that Bond didn’t need it to be a gadget, but a divers’ watch as it was intended is a nice change from the other Seiko gadget watches in all the Bond movies. 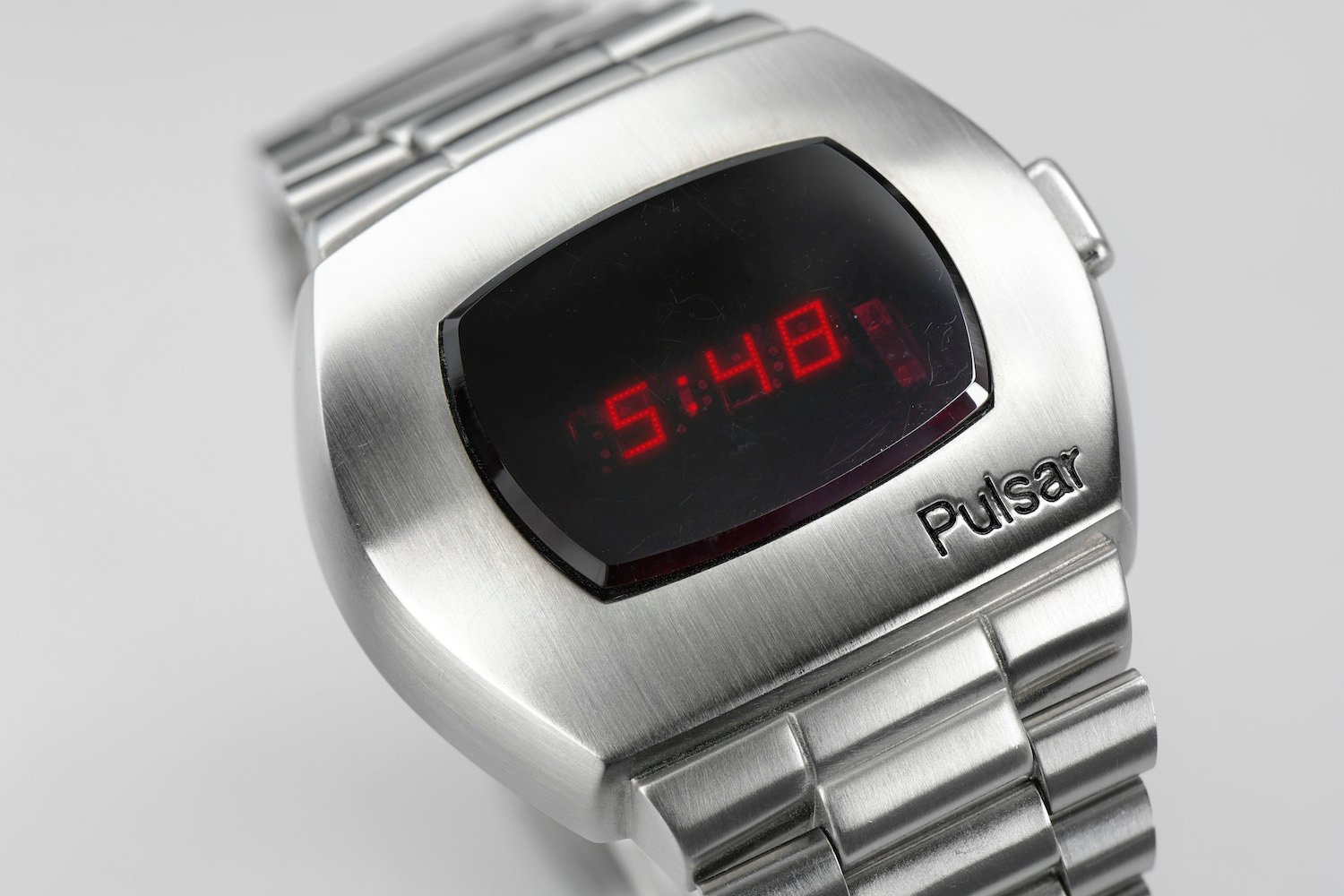 The Pulsar P2 is, without a doubt, one of the most memorable watches ever featured in a Bond film. Just look at it! The P2’s design is as futuristic now as it was back in the 1970s. At the time, the P2 was the world’s first successfully mass-produced digital watch. Roger Moore wore the digital LED watch in the opening scene of 1973’s Live And Let Die.

The P2 is featured in one of his many romantic adventures.

A fun fact about the appearance of the Pulsar P2 is that Bond doesn’t use it as a life-saving gadget during one of his adventures. Well, that’s actually a bad choice of words. It is actually featured in one of his many romantic adventures. 007 can be seen checking the time on his P2 while in bed with Italian agent Caruso when M frantically pushes the doorbell at 5:48 in the morning.

The Pulsar P2 was also well-loved outside of the Bond franchise. It could be seen around the wrists of celebrities like Keith Richards, Joe Frazier, Elton John, and Elvis Presley in the 1970s. Hamilton introduced the Hamilton PSR earlier this year that was inspired by the P2. Robert-Jan wrote a review about the Hamilton PSR. Almost five decades later, it still looks as great as it did in Live And Let Die. 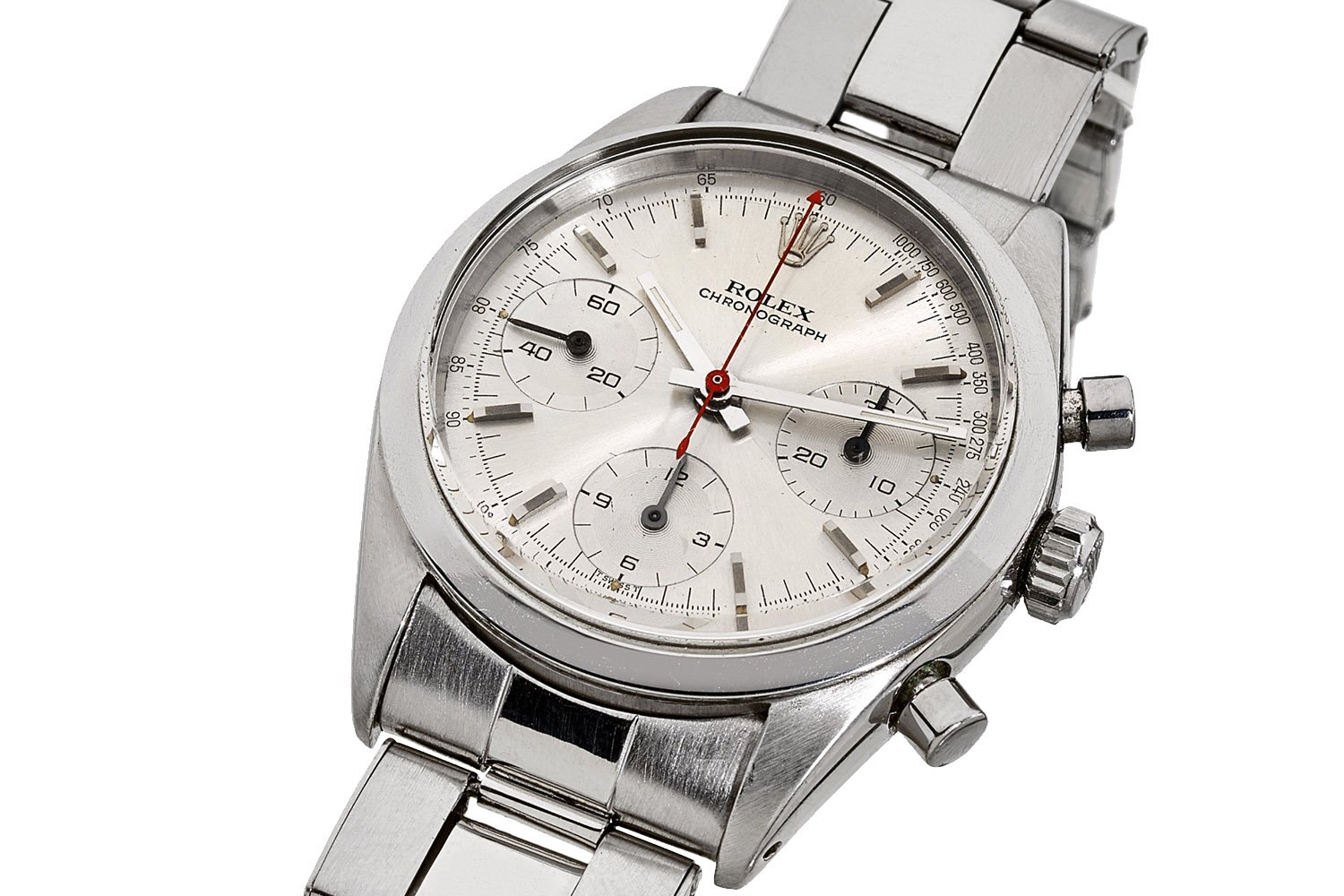 The first few times I saw On Her Majesty’s Secret Service during my younger years, I could not get used to George Lazenby as 007. The Australian “actor” was too rough around the edges for my taste. It was hard seeing him play the role of the sophisticated spy after Sean Connery had called it a day. But over the years, I have grown to appreciate Lazenby’s performance, the unique storyline, and the great style of the film.

In the film, Lazenby can be seen wearing a Rolex Submariner Ref. 5513 and the rare Rolex Chronograph Ref. 6238. This pre-Daytona chronograph has become one of the most fawned-over Bond watches ever. Lazenby wears the watch during a 007 undercover mission as Sir Hilary Bray, infiltrating Blofeld’s research institute in the Swiss Alps.

The Rolex Chronograph Ref. 6238 and Diana Rigg are the true stars of the film.

The watch’s standout feature is the red seconds hand that is supposed to function as a compass. The regular Ref. 6238 featured a black seconds hand, as you can see in this interview Robert-Jan did with a proud owner of a regular Ref. 6238. Over the years, this watch has been auctioned multiple times, with its auction price constantly increasing. The last time the watch surfaced was at a 2019 Antiquorum auction, but details of the sale are unknown. For me, this Rolex Chronograph Ref. 6238 and Lazenby’s wife in the film, played by the late Diana Rigg, are the film’s true stars. 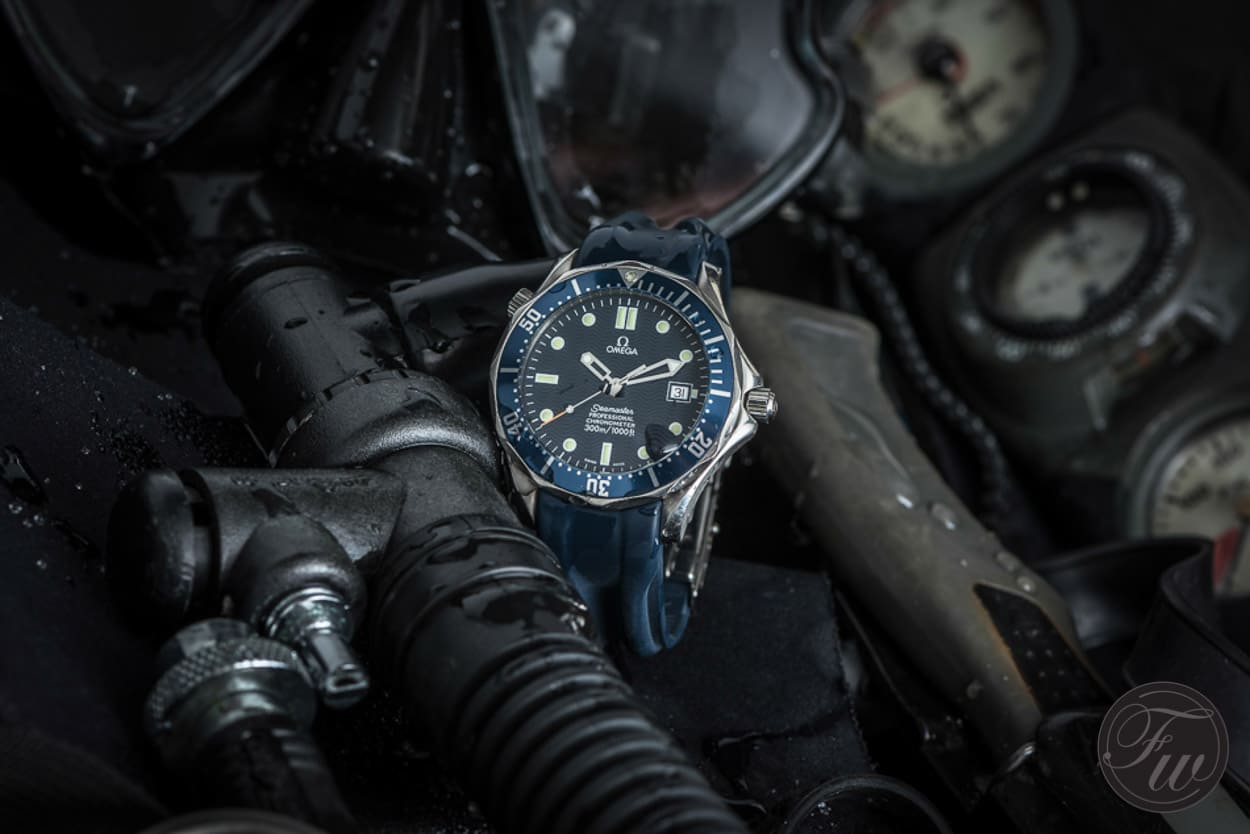 A list of the best Bond watches would not be complete without the iconic blue Omega Seamaster Professional 300M. But as you probably know, the first one was actually a quartz Seamaster Professional 300M Ref. 2541.80. It wasn’t until the second time Brosnan played Bond in Tomorrow Never Dies that he started wearing the automatic chronometer version of the Seamaster. That’s the one I prefer over the quartz version.

This Seamaster Professional 300M his is a great sleeper watch.

In the film, Bond uses the watch to remotely release a catch on a hand grenade inside a glass jar. It gets him out of a tricky situation with war-hungry media tycoon Elliot Carver. Brosnan wears the Seamaster Professional 300M Ref. 2531.80 in two other Bond movies, making it an Omega’s icon. The man that actually connected Omega to the Bond franchise was industry legend Jean-Claude Biver. In a stroke of genius, he started the Omega Bond legacy.

Another reason to choose this Seamaster Professional 300M Ref. 2531.80 is that it is one of the easier Bond watches to obtain. A pre-owned version with box and papers can be yours for around €2,500. Robert-Jan wrote an article in 2018 explaining why this is a great sleeper watch. In it, he explains that “it might be time to recognize this watch as a classic.” Whatever your thoughts are on that, there is no denying this watch has become a Bond touchstone. 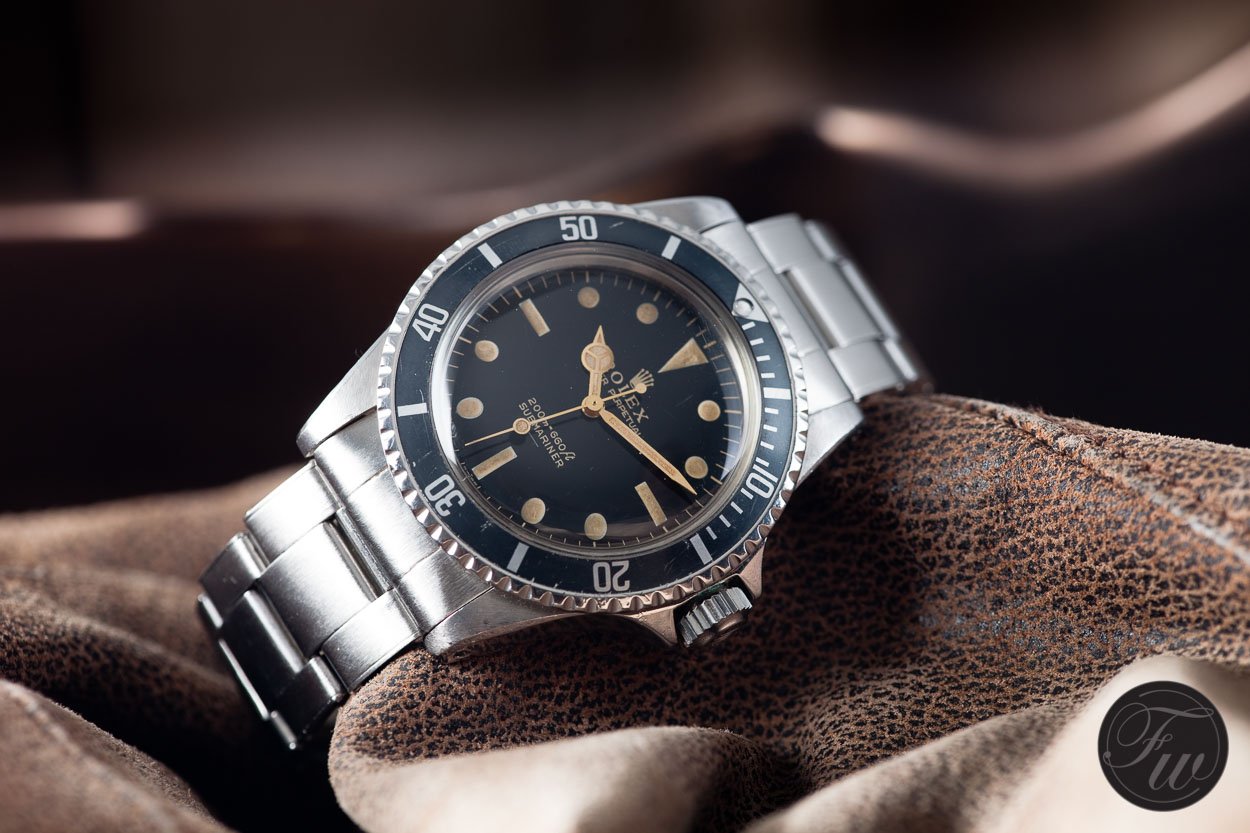 The Rolex Submariner Ref. 5513 has become a legendary Bond watch. I mentioned it shortly in when discussing George Lazenby and his Rolex Chronograph ref. 6238. It was actually the first time that the Submariner Ref. 5513 could be seen in a Bond film. After that, the watch can be seen on Roger Moore’s wrist in Live and Let Die and The Man with the Golden Gun.

Especially the scenes with the Submariner in Live and Let Die have become legendary with Bond fans. After Bond swaps his Pulsar P2 for his trusted Submariner, you can see him use it as a magnet. First jokingly, when Bond uses it to have M’s teaspoon get stuck to the watch and when opening the zipper of Italian agent Caruso’s dress. Later on, however, the magnetic properties get him out of trouble when Bond is tied up.

The Submariner turns out to be a circular saw. 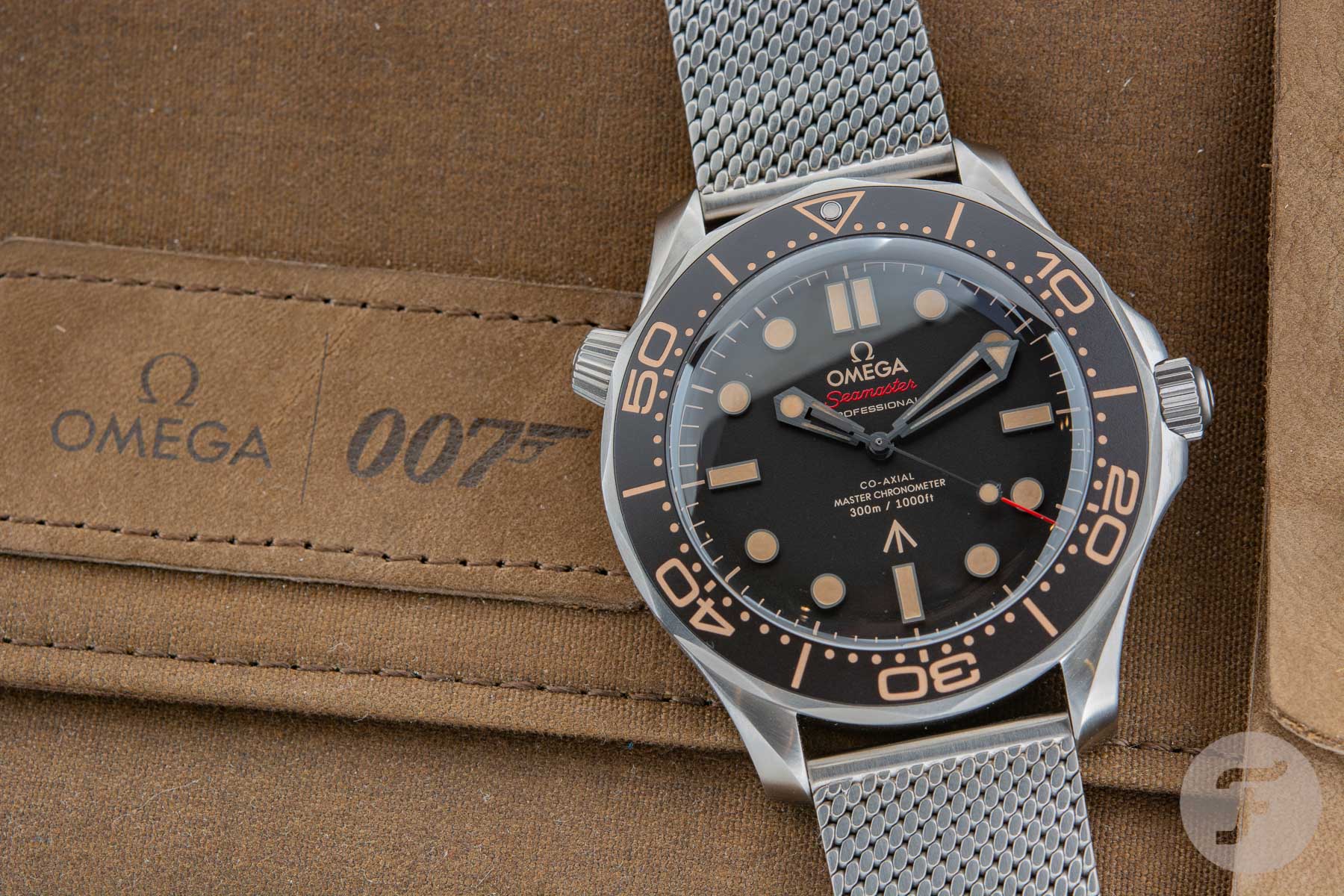 That is not something we can say of the number 2 on our list of favorite Bond watches. We actually haven’t seen the watch in action. But from seeing the trailers for No Time To Die, we know that the Omega Seamaster Diver 300M 007 Edition is featured quite prominently in the film. The first time it can be seen is when Q presents the watch to Bond. And in the trailers, it can be seen multiple times. I especially love the scene where Daniel Craig wears the watch on a sailboat while a plane flies over. It’s great to see the watch, well, because it’s a stunning watch.

The watch has become iconic before we have seen it on the big screen.

Reactions to the Seamaster Diver 300M 007 Edition have been overwhelmingly positive. It is the first time that we see Bond wear the latest generation Seamaster Diver 300M, and Omega has made it something extraordinary. It’s a combination of great looks, incredible materials and production techniques, and Bond storytelling.

In his article about the Seamaster Siver 300M 007 Edition, Robert Jan explained what makes it such a great watch. I had the pleasure of wearing it myself, and while I am usually not the biggest fan of the specific Bond branded watches, this one blew me away. The lightweight titanium case, the absence of a date window, the military markings, the domed crystal, and the titanium Milanese bracelet, it’s all done quite brilliantly. It’s no wonder the Omega Seamaster Diver 300M 007 Edition has already become iconic with Bond fans before we have seen it on the big screen. 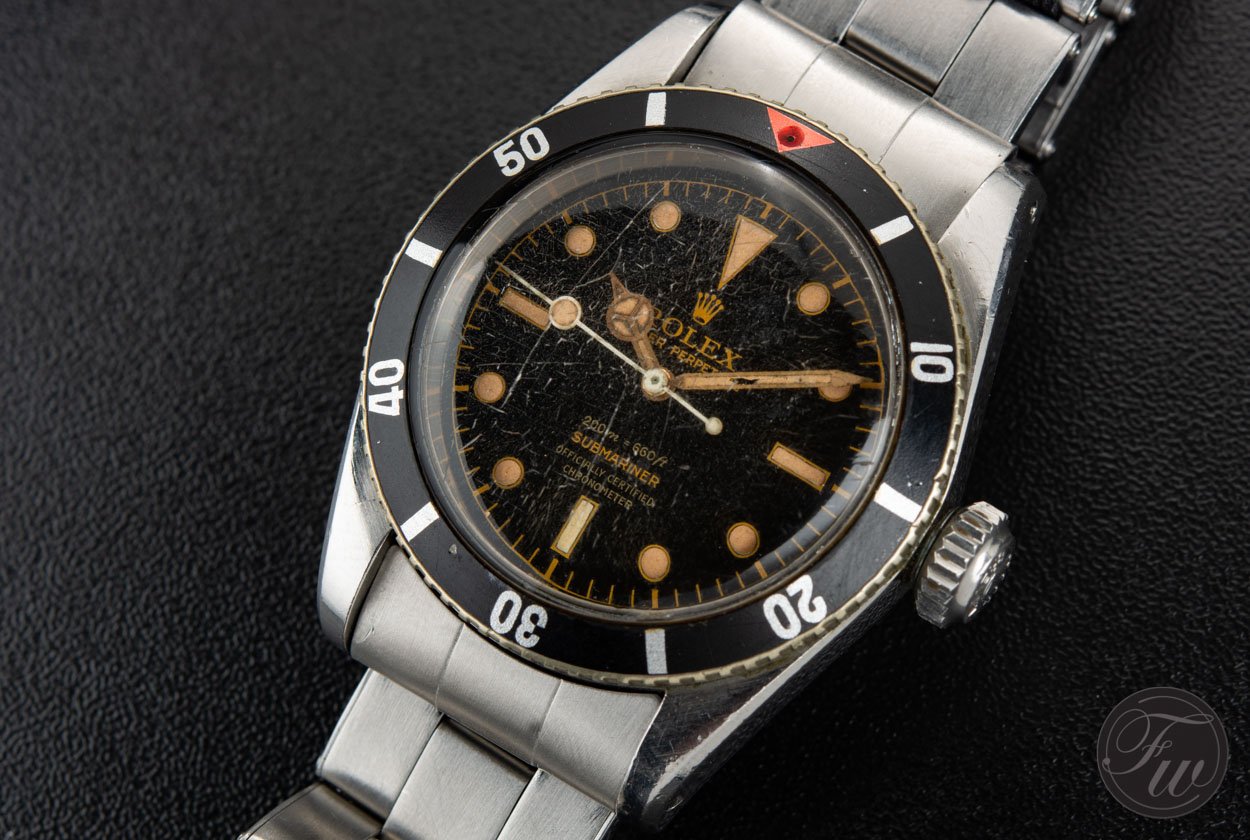 As I explained in my introduction, this list is a tribute to Sean Connery’s brilliant performances as James Bond. So there was only one watch that could be on the top of our list. Sean Connery actually wore the Rolex Submariner Ref. 6538 in four of the six official Bond films he appears in. In You Only Live Twice, and Diamonds Are Forever there is no watch visible during the film. But after wearing it in Dr. No, From Russia With Love, Goldfinger and Thunderball, the Rolex Submariner Ref. 6538 has also become known as the James Bond Submariner.

The Rolex Submariner Ref. 6538 reminds us of Connery’s brilliance.

Movie experts believe that the Submariner was actually one of Sean Connery’s own personal possessions. In the first two Bond films, he can be seen wearing it on a leather strap. In Goldfinger and Thunderball, Connery wore it on a much too narrow textile strap. The most memorable scene with the “Big Crown” Submariner is without a doubt the scene in Goldfinger where Bond illuminates the watch’s dial with his lighter.

So much has been said about the Rolex Submariner Ref. 6538 in relation to James Bond. And with the passing of Sean Connery, we have lost one of our time’s biggest actors and the original James Bond. Fortunately, we have the great Submariner Ref. 6538 to remind us of Connery’s brilliant portrayal of the world’s most famous spy. And that reason alone is why this is on the top of our list.

There you have it, our list of the seven best James Bond watches. But let us know what your favorites are in the comment section. We love to find out your Bond stories, so please, share them also.