Auction Absurdity — Why Pay So Much More For A Rolex Or Patek Philippe Watch?

Even if you don’t follow watch auctions, you may know that the Patek Philippe Nautilus 5711 with its Tiffany & Co. signed dial in the distinct color of the famous jeweler sold for more than $6 million at an auction earlier this month. Of the 170 watches made, this particular Nautilus 5711 Tiffany 170th Anniversary Limited Edition that “normally” retails for $52,635, was auctioned off to support the Virginia-based, non-profit Nature Conservancy. It’s a special watch for a special occasion; that kind of explains the stellar price. But even when it comes to non-beneficiary auctions, watch auction prices still go through the roof. Why pay so much more for a Patek Philippe or Rolex at an auction with all the buyer’s premiums instead of purchasing from a trustworthy pre-owned (online) shop?

There is a benefit to buying a watch if its proceeds go to charity. Under U.S. tax laws, the buyer of a watch like the Nautilus 5711 Tiffany 170th Anniversary Limited Edition (an unnamed New Yorker, according to insiders) can claim a charitable contribution deduction for the excess of the purchase price paid for an item over its fair market value. The donor must be able to show, however, that he or she knew that the value of the item was less than the amount paid. Let’s check the numbers to be sure. The list price of the Nautilus is $52,635. The price when the hammer finally fell was $5,350,000. And with the buyer’s premium added on top, the total price tag read $6,503,000. Check! That’s a tax deduction of $6,450,365 (!) for the buyer if I’m not mistaken. However, I’m not a U.S tax expert, so please correct me if I’m wrong. 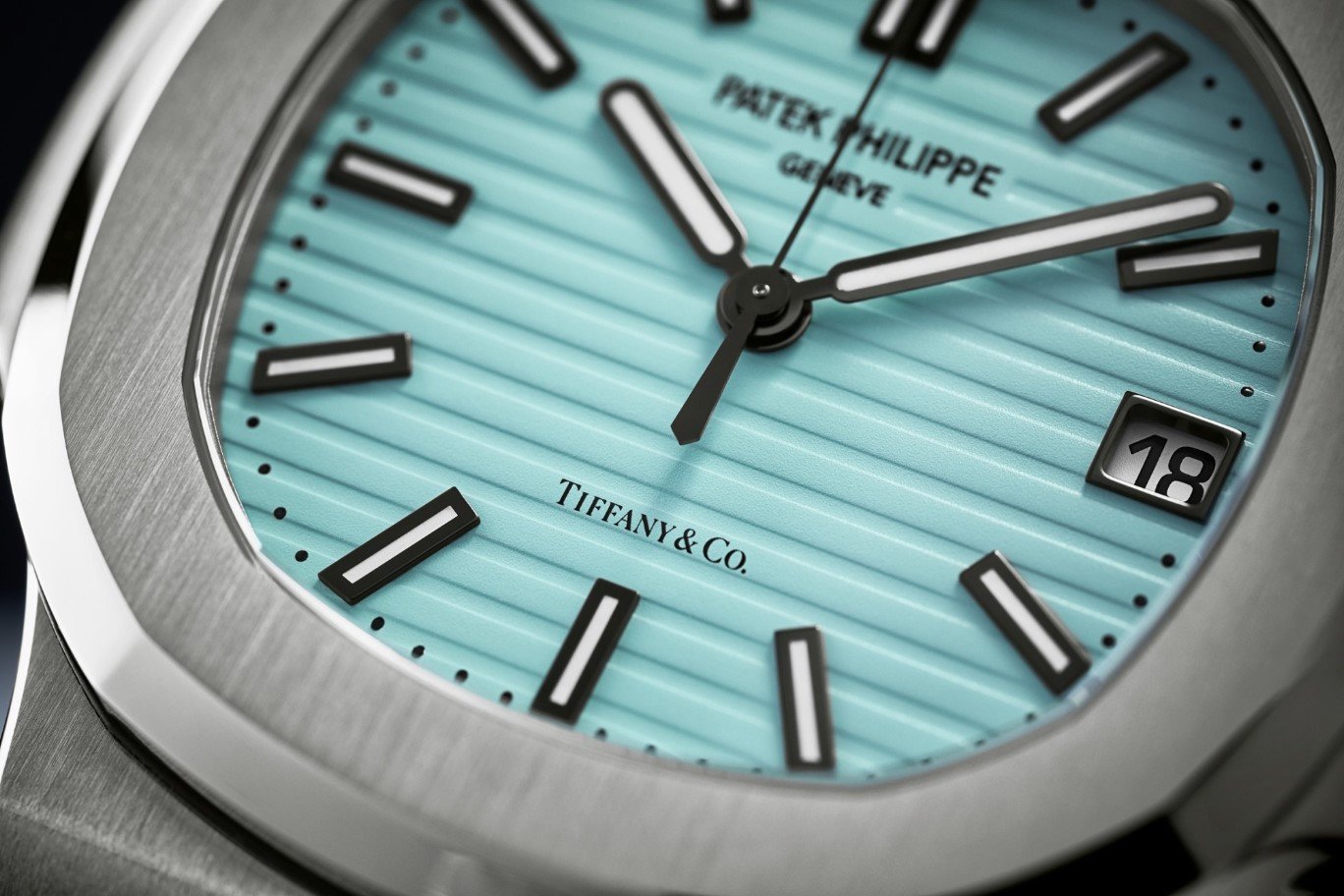 Why pay so much more for a Patek Philippe or Rolex at an auction?

But though the Phillips 2021 New York Watch Auction raked in $35.9 million in total, the buyers of the others watches didn’t get that big tax break. They simply just paid top dollar. Well, more than top dollar, because some of the prices were, well, alarming, to put it mildly. But why pay so much more for a Patek Philippe or Rolex at an auction than you would have to when you go to a trusted pre-owned dealer? The buyer’s premium at Phillips for example, is 26% of the hammer price up to and including $600,000. They take 21% of the portion of the hammer price above $600,000 up to and including $6,000,000 and 14.5% of the portion of the hammer price above $6,000,000. When you buy a pre-owned watch on Chrono24, you pay a 6.5% commission fee. You do the math. I’m no psychiatrist, but maybe the through-the-roof prices paid at auctions have to do with the mass hysteria that slowly but surely builds up during an auction. You could compare it with the feeding frenzy you might have seen during Shark Week, when a school of blue sharks completely goes berserk when they feed on large quantities of anchovies. Let me give you an example of a watch that caught my attention during the Phillips auction in New York.

Following the record-breaking Nautilus with its coral blue dial, the adrenaline in the room must have been almost tangible. Even when watching it online, the atmosphere was electrifying. And then it was time for lot 118, a 2018 Rolex ref. 116610LV, “an unworn, brightly colored, and attractive stainless steel diver’s wristwatch with center seconds, date, green ceramic bezel, guarantee, and presentation box.” That “Hulk” smashed rationality to smithereens. 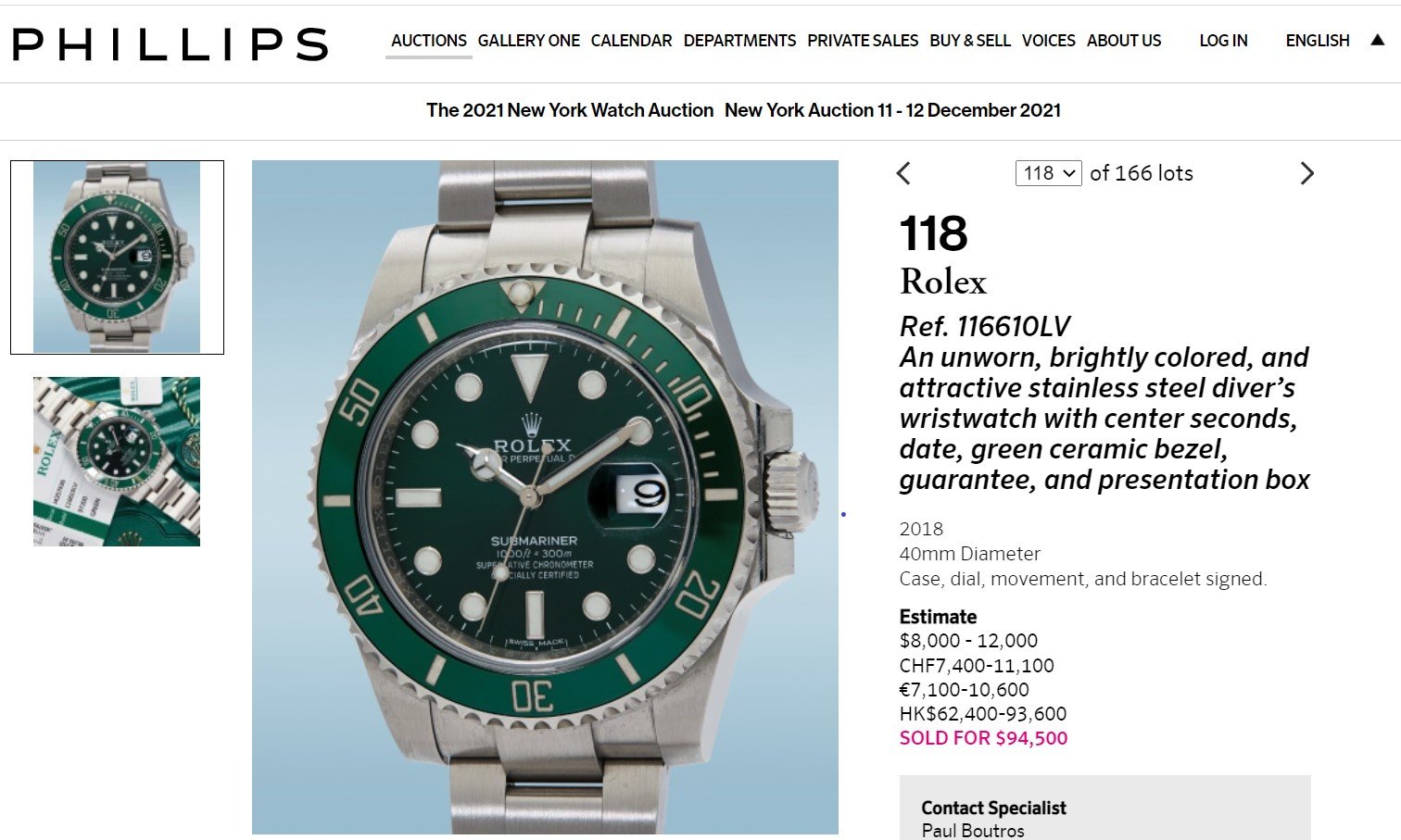 The “Hulk” smashes all logic 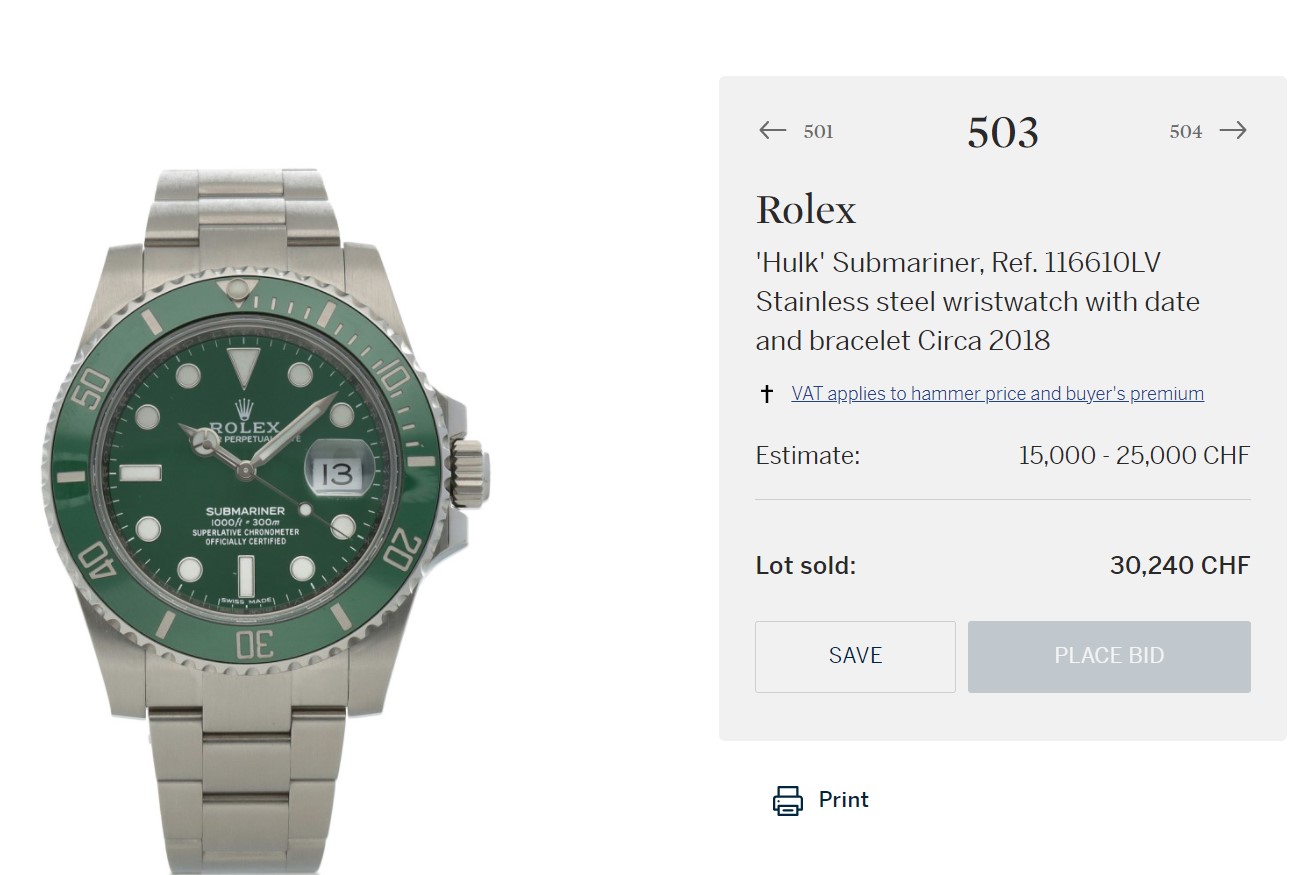 The puppeteer on stage

Mass hysteria is one big factor. Please have a look at lot 40 that is up for sale in Sotheby’s December Fine Watches sale, the final sale of the year to take place in Geneva. While I write this, the current bid on this 2017 Submariner ref. 116610LV is CHF 17,000. The auction closes in a few days, so the price could still skyrocket, but for now, all is quiet on the shorelines of Lake Geneva.

… bidders in a room, spurred on by a charismatic auctioneer who can play the people in front of him like mere puppets.

Or maybe I should say, online. Since this is an online auction, there’s no “school” of bidders in a room, spurred on by a charismatic auctioneer who can play the people in front of him like mere puppets. Still, even with online auctions, bidding wars are not too uncommon. You often see them escalate real quick when the auction is on the brink of closing. Let’s just remain calm and see what this “Hulk” does. 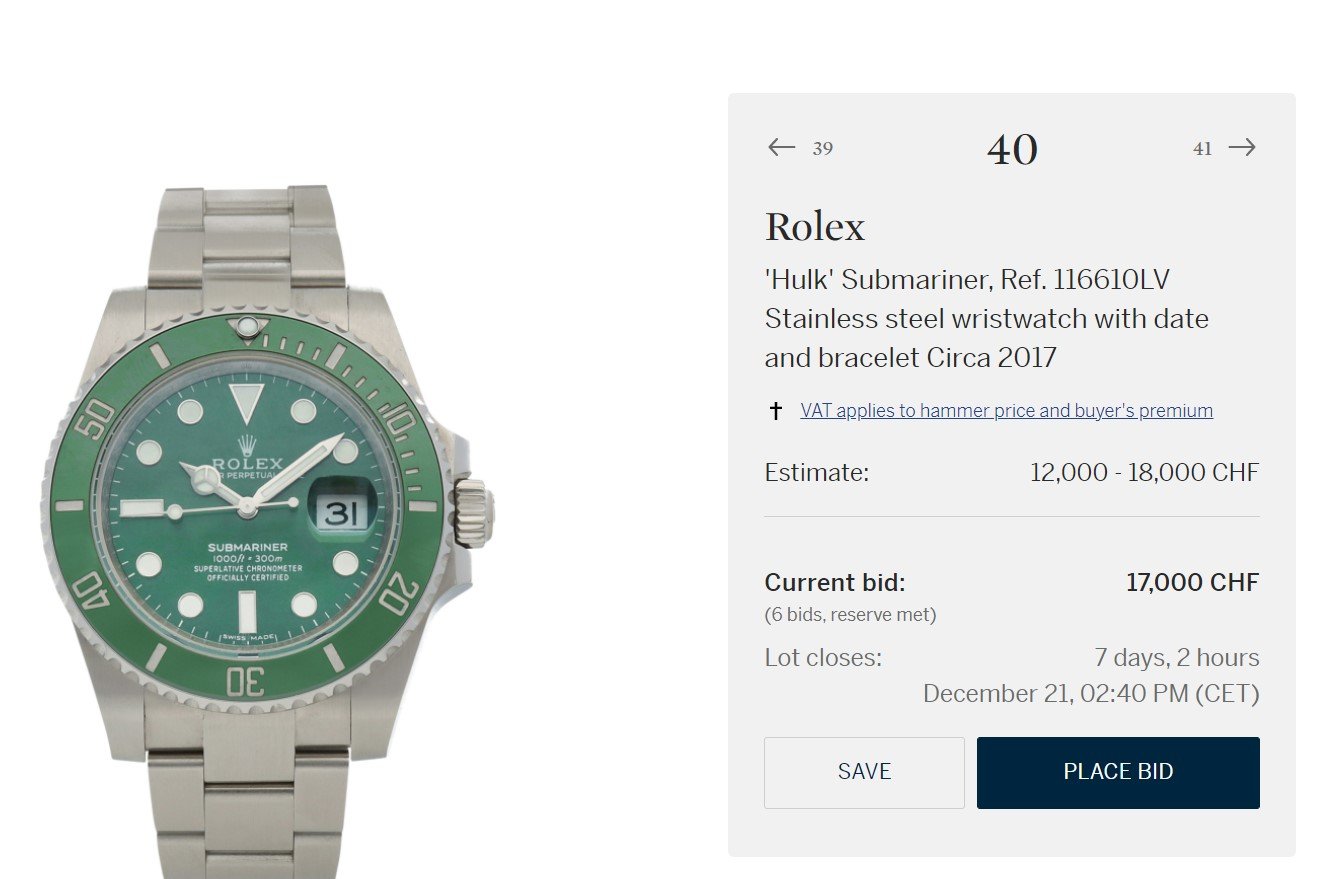 Hammertrack has the numbers

There’s no denying auctions are on fire this year. The year 2020 was slow because COVID-19 held most people in lockdown, so it’s better to compare 2019 with this year when it comes to a total of auction results.  Hammertrack is a comprehensive report by The Mercury Project, a data-driven consulting company. It monitors the results of the watch auctions achieved by the major auctions houses. According to Hammertrack, the first half of 2021 has been one of the most extraordinary semesters in the watch auction business. Global watch auction sales from Antiquorum, Bonhams, Christie’s, Poly Auction, Sotheby’s, and Phillips ended at CHF 241 million, up 239% compared to the first half of 2020 and up 49% compared to the first half of 2019, before the pandemic. 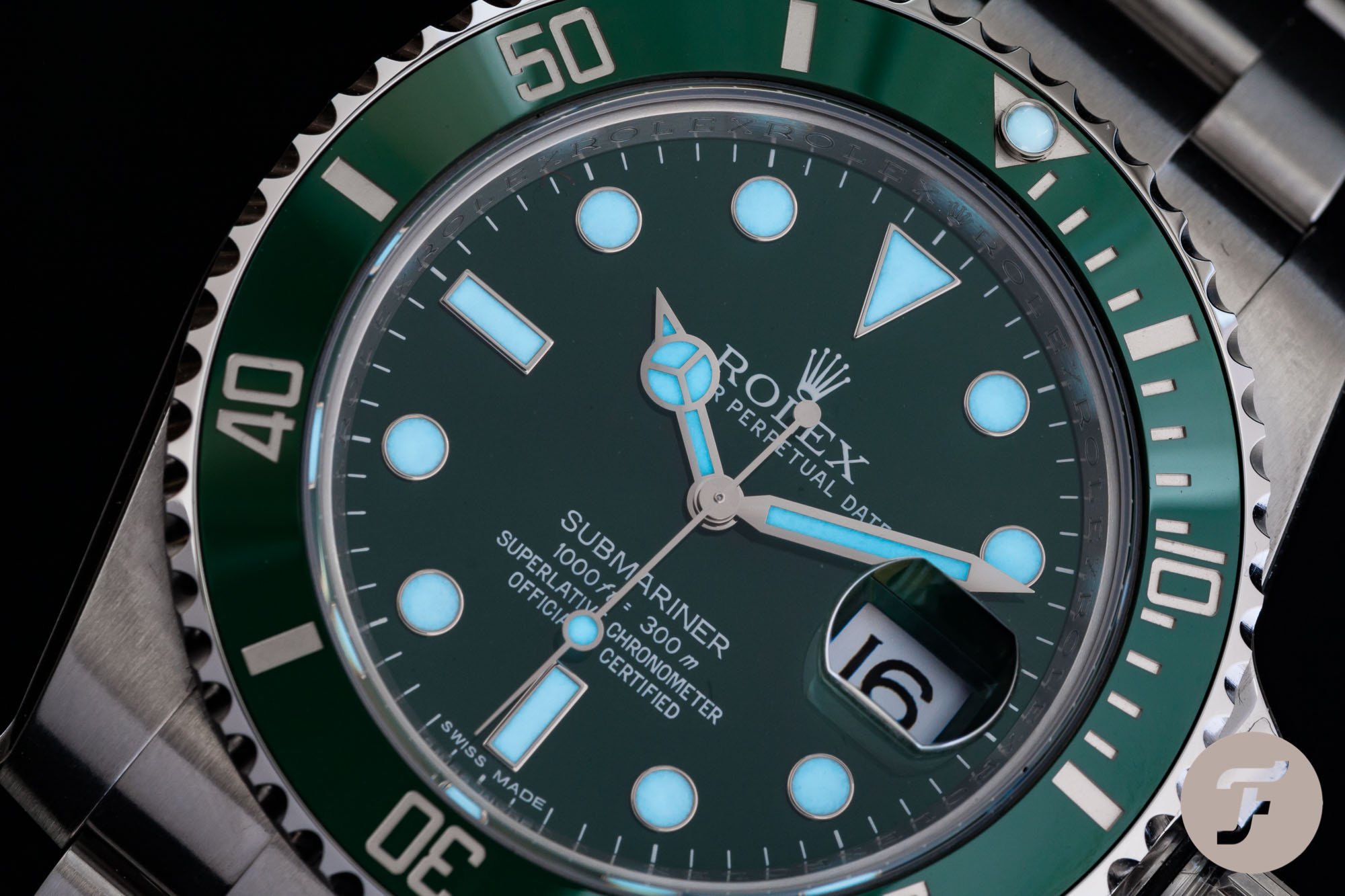 The report doesn’t include the Phillips 2021 New York Watch Auction that realized $35.9 million, or the Phillips Geneva Watch Auction XIV that set a record for the highest-grossing watch sale, achieving just shy of $75 million. But with growth such as this, when 2021 is over, the market is set to beat the 2019 figure of CHF 390 million and pass the CHF 400 million mark for the full year of 2021. And why would 2022 be a slow year? There’s no sign yet of the auction market cooling down. On the contrary, the last auctions of the year showed extraordinary results. Remember the early 1957 Speedmaster Ref. CK2915-1 that sold for over $3.4 million at Phillips in November? That “Speedy” smashed the record for the most expensive Omega wristwatch. 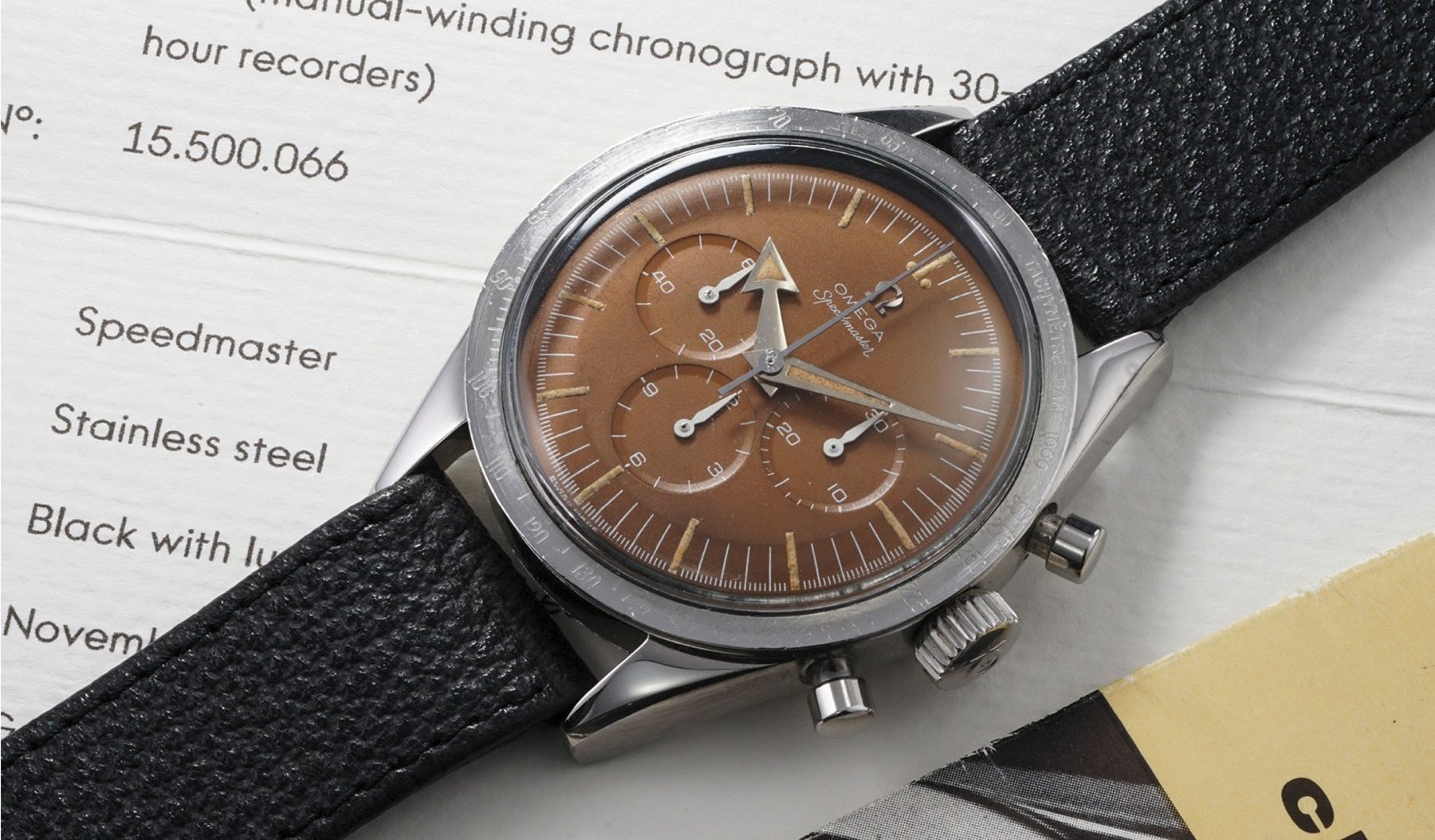 Not a dying breed

Is the growing auction market a healthy development, or does it set off alarm bells? Both, I guess. It shows that mechanical watches are far from a dying breed, as some predicted when the Apple Watch came into play. The reality, thankfully, isn’t as grim. In June 2021, watch exports reached CHF 2 billion, which was 12.5%  higher than the exports in the same period in 2019. We can just disregard 2020, though, a year everyone in Switzerland and the rest of the world wants to erase from their memory.

Just think of all the steel sports watches Rolex produces that are simply not available at your AD.

But the market is a strange place nowadays. Just think of all the steel sports watches that Patek Philippe or Rolex produce that are simply not available at your AD. And that causes the strange effect that a white gold Daytona has the same price on the secondary market as a steel one. 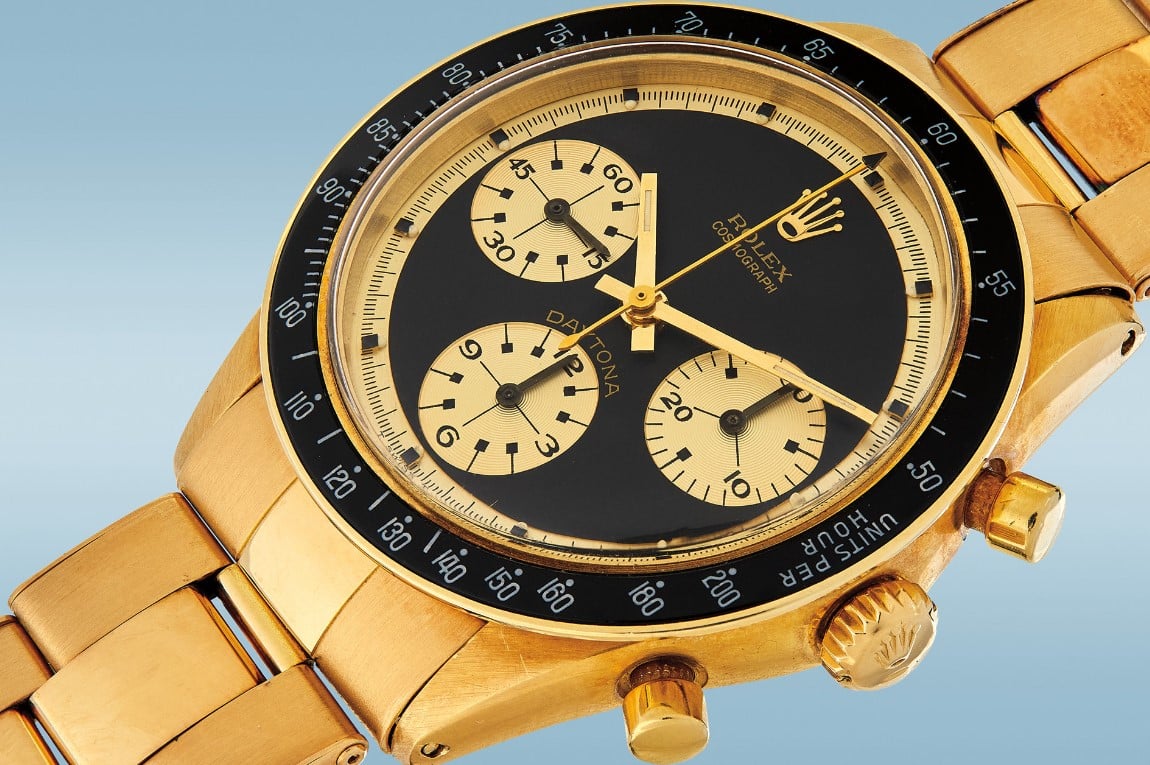 The market is always right

You could say the market is always right. But it is somewhat bewildering that the value of the materials used in and the scarcity of a watch count for way less than the forces at work when it comes to the sports watch market. Yes, the Submariner “Hulk” has its unique looks, its history, and the success of the brand to show for itself. But it’s not like Rolex produced just a few of these particular “Subs”. There are watches in precious metals out there — straight-up masterpieces that are made in way fewer quantities, requiring way more man-hours to build due to their complicated movements — that cost less than the “Hulk” that sold at auction in New York. 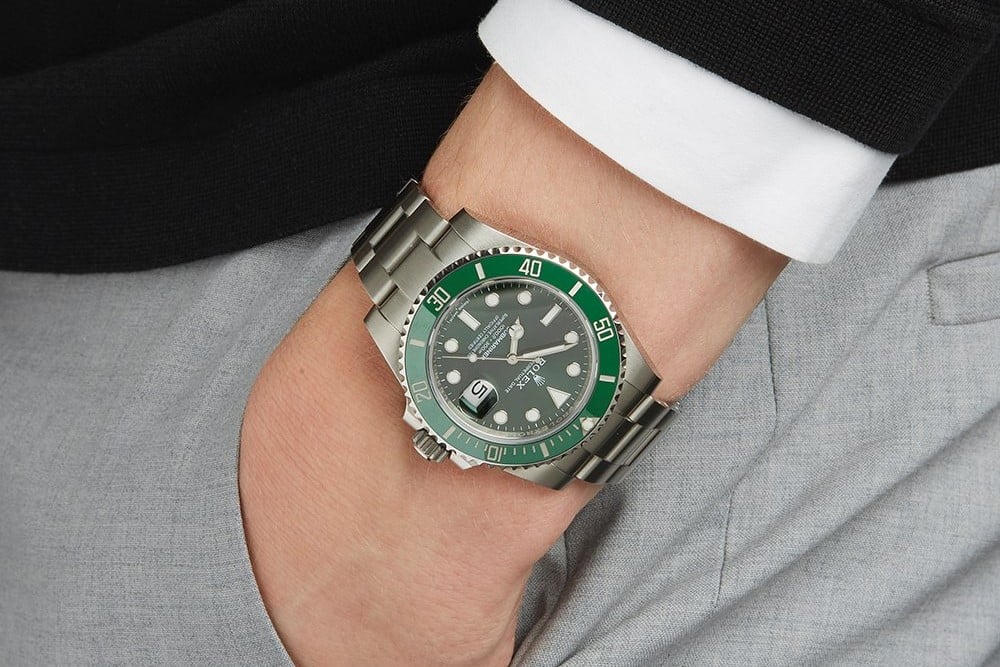 It brings us back to the question of why you would even buy a green Rolex Submariner at an auction for $90K when you can go online and find one for $25K? To answer that question, you may have to ask what type of buyer is in the picture here. Maybe it’s someone who doesn’t want to be in the picture at all, if you know what I mean.

The FIU points out that both jewelers and banks don’t always red-flag suspicious transactions.

The trade of exclusive watches is becoming the money-laundering operation of choice for criminals, according to an article in the Dutch newspaper De Telegraaf. And the Financial Intelligence Unit (FIU) of the Netherlands recently published an alarming article in which they explained how financial criminals use luxury watches to conduct money laundering. The FIU points out that both jewelers and banks don’t always red-flag suspicious transactions. All this casts a dark shadow over prestigious watches. 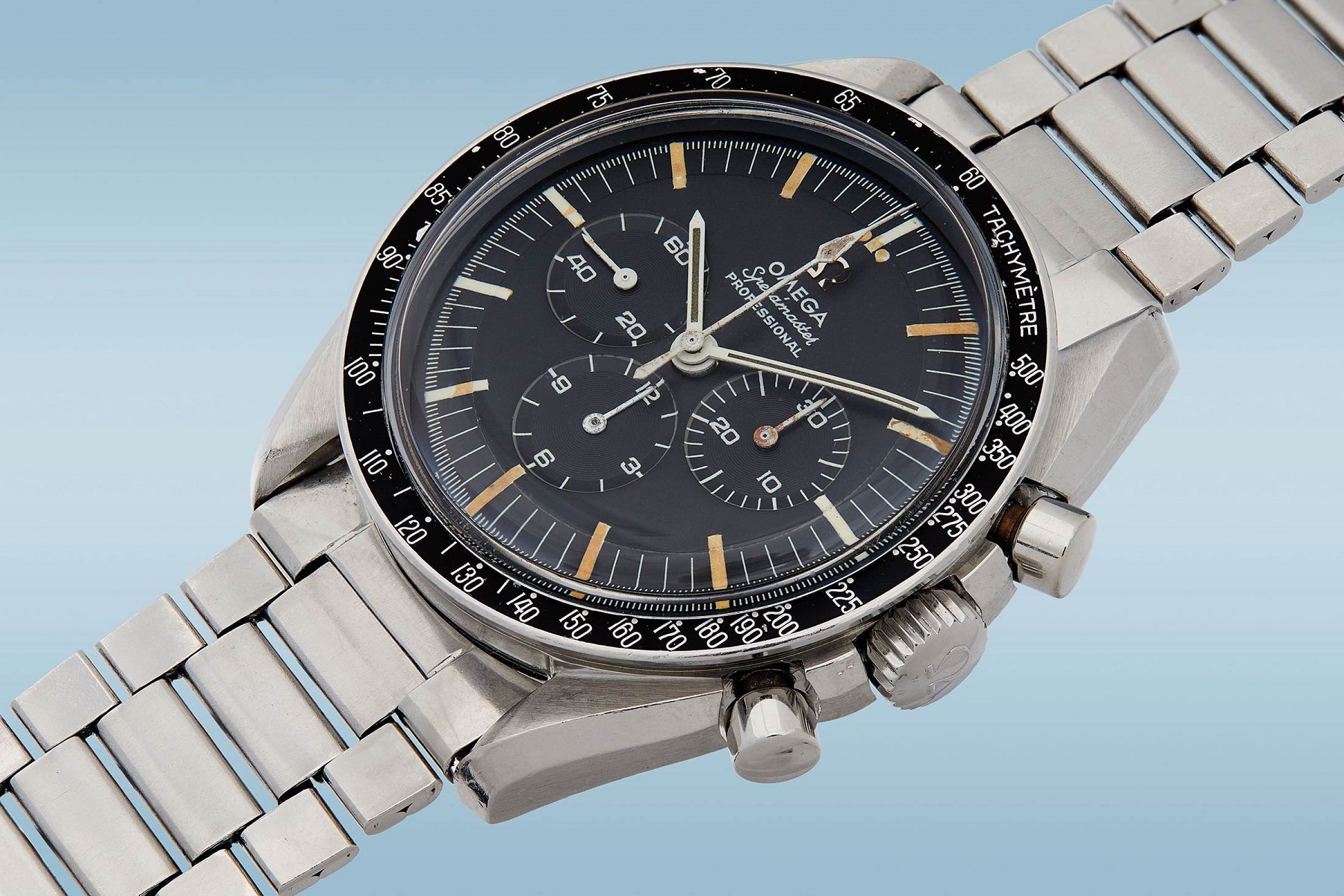 I think it’s safe to say that purist collectors of fine watches on the lookout for that very special piece are not amongst those interested in an obvious status symbol like a Rolex “Hulk”. They probably disapprovingly shook their heads when that “Hulk” reached $90K. And that’s not because a collector is a Scrooge-like character. A seasoned collector is well aware that special watches deserve special prices.

This “Speedy” is special because it belonged to Ralph Ellison, the famous author of Invisible Man.

Watches like the Omega Speedmaster ref. 145.012 that achieved $667,800 in the Phillips 2021 New York Watch Auction. This “Speedy” is special because it belonged to Ralph Ellison, the famous author of Invisible Man. This particular Speedmaster is now the most expensive ref. 145.012 ever auctioned. It’s unique and it has pedigree. It’s the stuff passionate watch collectors (or brands, but that’s a different story) pay top dollar for. It’s pieces like this that keep auctions interesting because it’s not about the money, but rather, the watch. 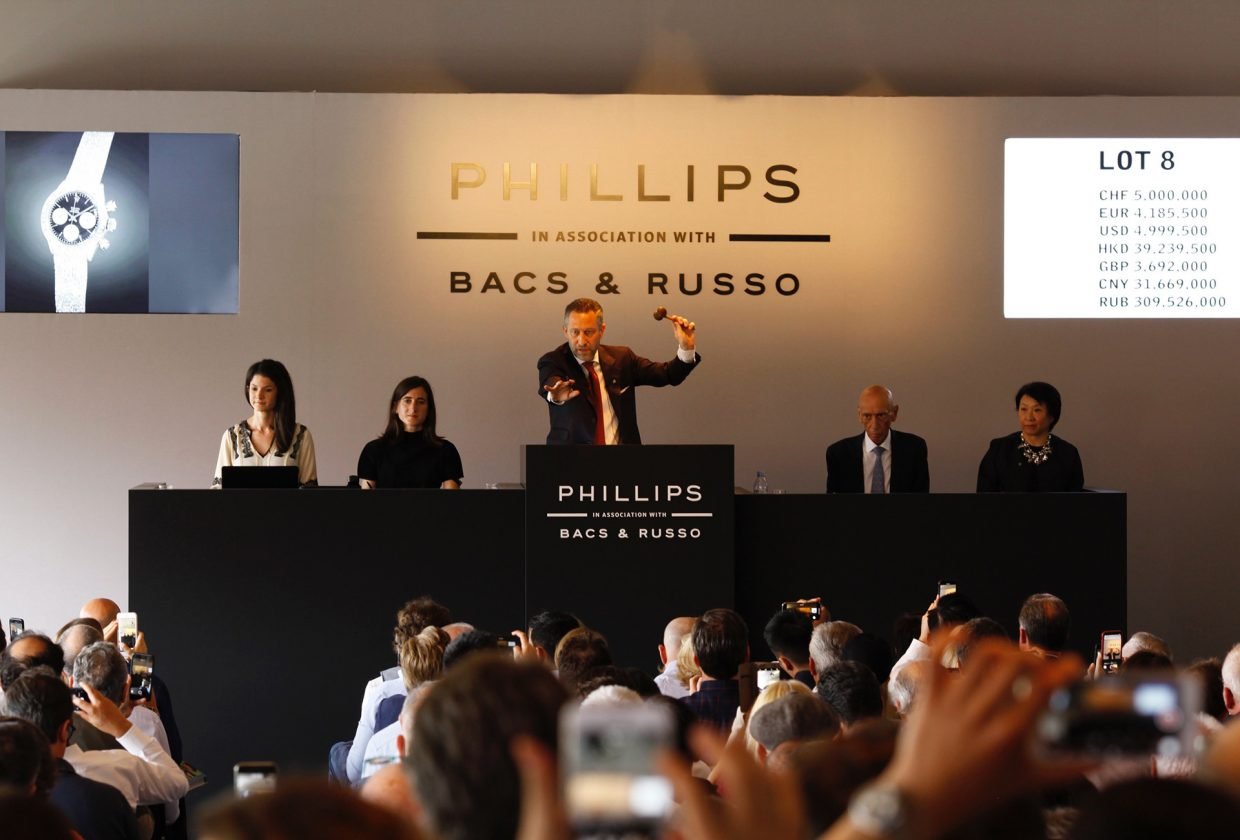 Auctions are fun. Yes, they are. The buzz, the energy, and the entertaining ways of a skilled auctioneer sure get the adrenaline flowing. It’s a spectacle that never fails to entertain. If you’re there to have a shot at that one watch you so desire, or to get that rare piece that’s missing from your collection — be it a watch from Patek Philippe or Rolex or something completely different— an auction can be the rare opportunity to make a dream come true. But if you want a way-less-rare watch that just happens to be in fashion, and you’re willing to pay a premium price for that, there are better ways to shell out your hard-earned, honest money. Find one with a respected pre-owned seller, and pay the price that comes with the hype. Just don’t get caught up in a bidding war you can’t win.

*Credits: Image of the Hulk is done by Eneas De Troya.