The Drink You Can’t Have: Rolex GMT-Master Pepsi

Today I’m going to launch one of the most requested watches since the launch of Watches and Pencils. It will be all about this famous thirst quencher: 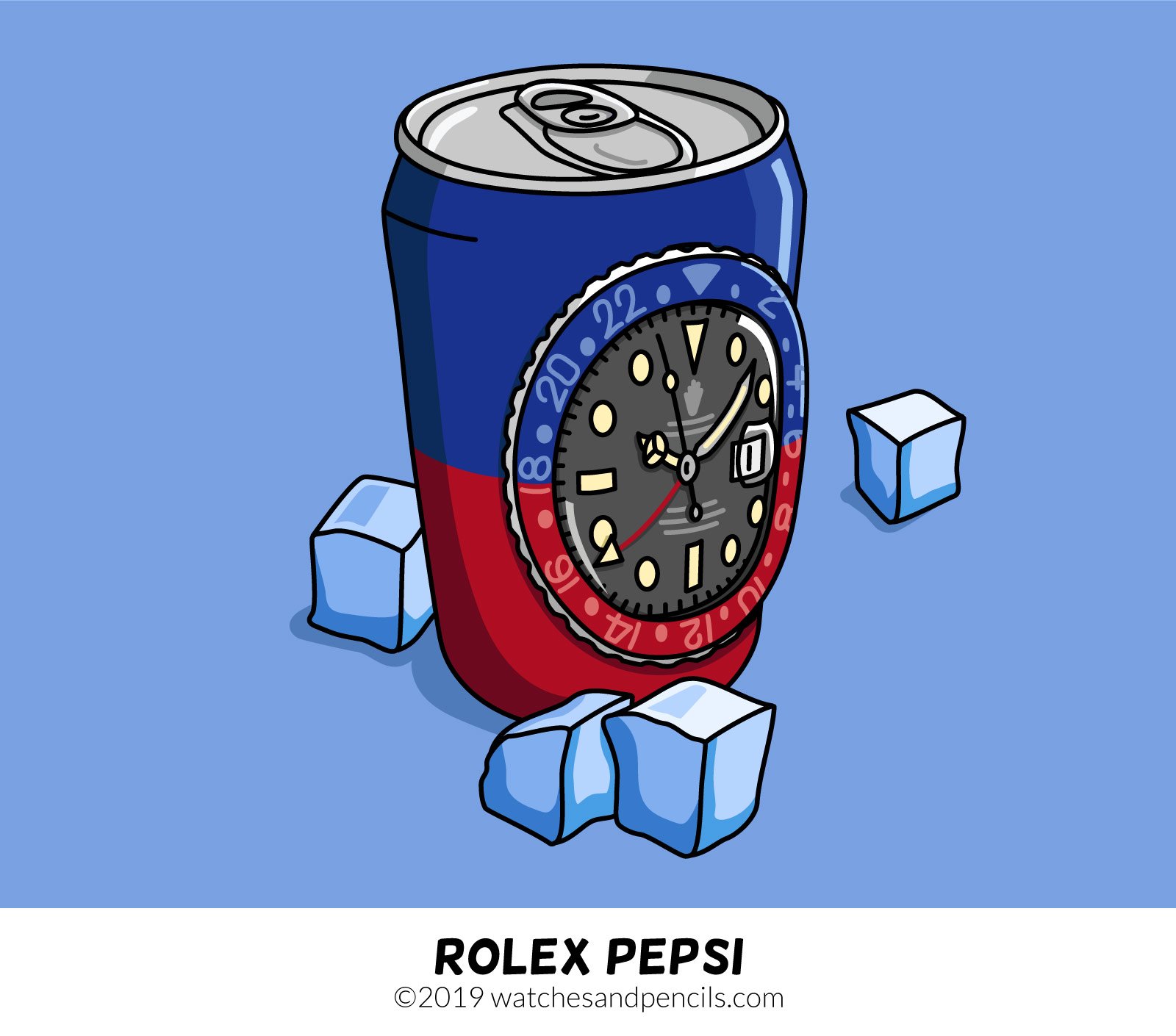 The nickname ‘Pepsi’ for the Rolex GMT-Master seems to be quite old. I found several sources that go back multiple decades. It is an old and at least one of the most famous nicknames. Almost every watchnerd knows what you’re talking about when you speak about the Rolex ‘Pepsi’. Intentionally, Rolex created the famous blue/red bezel by request of Pan-Am. This airliner asked Rolex to develop the watch because the flights were becoming longer and pilots needed something to read multiple timezones. One of the requested features in this project was that the bezel colors needed to match to the Pan-Am Airlines’ company colors. 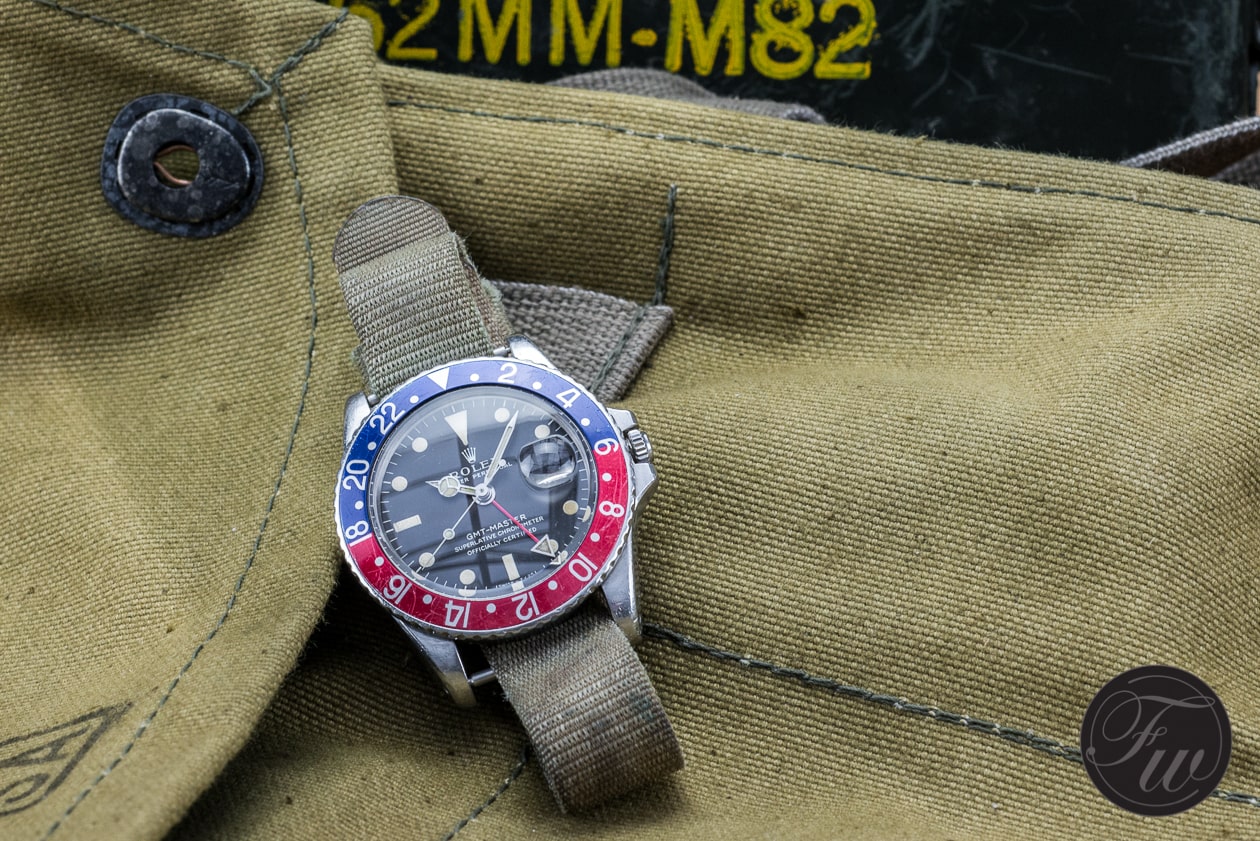 Advertisements do not always promote “Pepsi”

So which model was the first nicknamed Pepsi? The first Rolex GMT dates from 1954 (reference 6542). It has a bakelite bezel and was a great hit. Not much later the model was upgraded with an aluminium bezel (bi-directional). Until today, this model (reference 1675) is still one of the most sought after vintage watches. Both of the watches are widely named ‘Pepsi’. But was it called ‘Pepsi’ right from the beginning? Nowadays, crisp (digital) advertisements now let the colors stand out and emphasize the blue and red colors. A link to ‘Pepsi’ is made easier. But, back in the 50’s, 60’s and 70’s a lot of Rolex advertisements were in black and white. Back in the days, you really had to go to the shop to see the watch and all of its colors in full glory. This brings me back to the question: when was the term ‘Pepsi’ introduced?

Fast forward. Back in the 80’s a new Rolex GMT-Master model was introduced (reference 16760). With other bezel colors to differentiate between the GMT Master and GMT Master II. The GMT Master was recognizable by its alternative bezel colors: black and red. It was therefore nicknamed ‘Coke’ and Fat Lady (because of the thicker case). While ‘Coke’ is also a popular term in the world of watchnerds, it never became as popular as ‘Pepsi’. The reason for this might be that the watch has multiple nicknames and not only one true nickname which everybody uses.

The 16700 might be the first model which was nicknamed ‘Pepsi’ back in the 80’s. Why? Well, as said, from that point there were 2 color variations of the GMT. The ‘Pepsi’ and ‘Coke’ variant. As you might, know, there were other color variations before this point, but they not widely sold in public. Was the 16700 the first GMT which was nicknamed ‘Pepsi’? 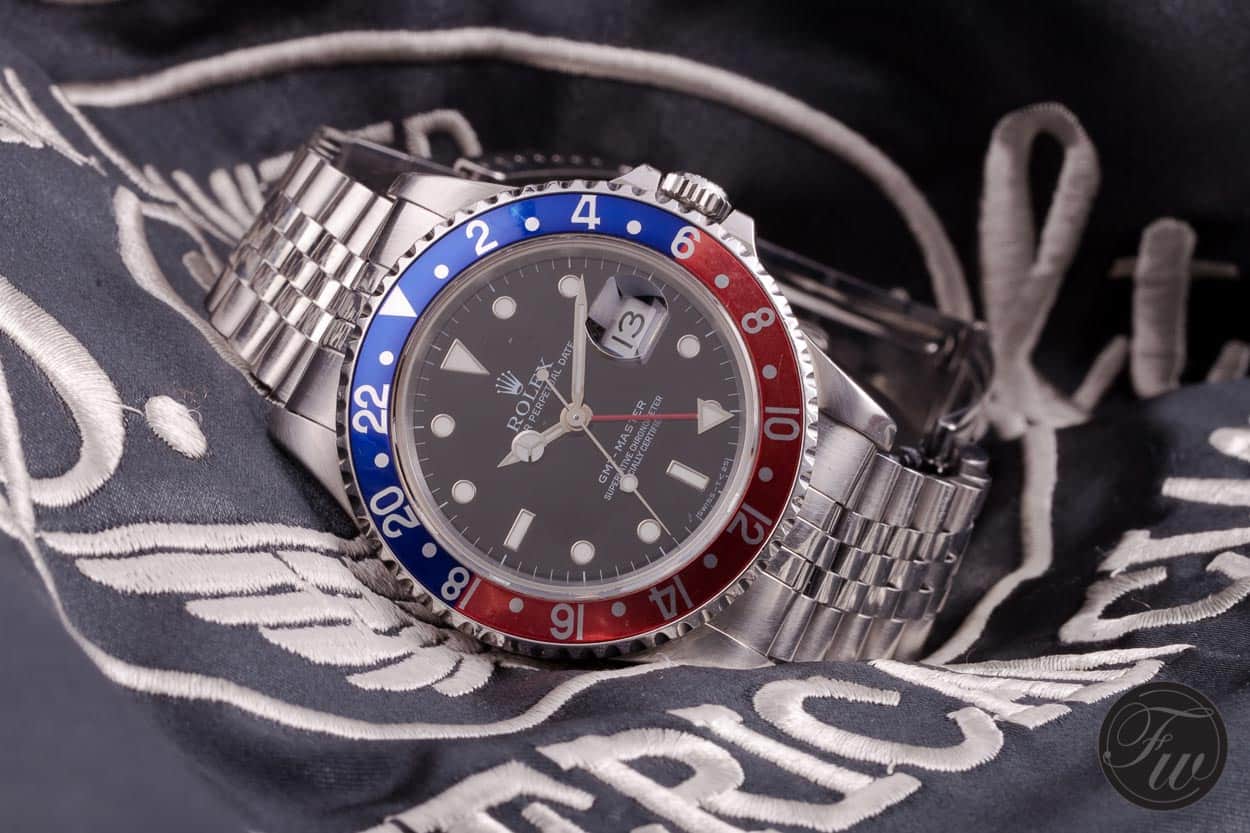 Vintage Rolex GMT-Master bezels tend to fade. Depending on the environment there are many, many known color variants. To name some: brown, pink, purple, light-blue, etcetera. This “problem” was fixed with the introduction of the Cerachrome bezels on the last two Rolex GMT ‘Pepsi’ models (reference 116719BLRO and 126710). They preserve their ‘Pepsi’ colors and do not fade. 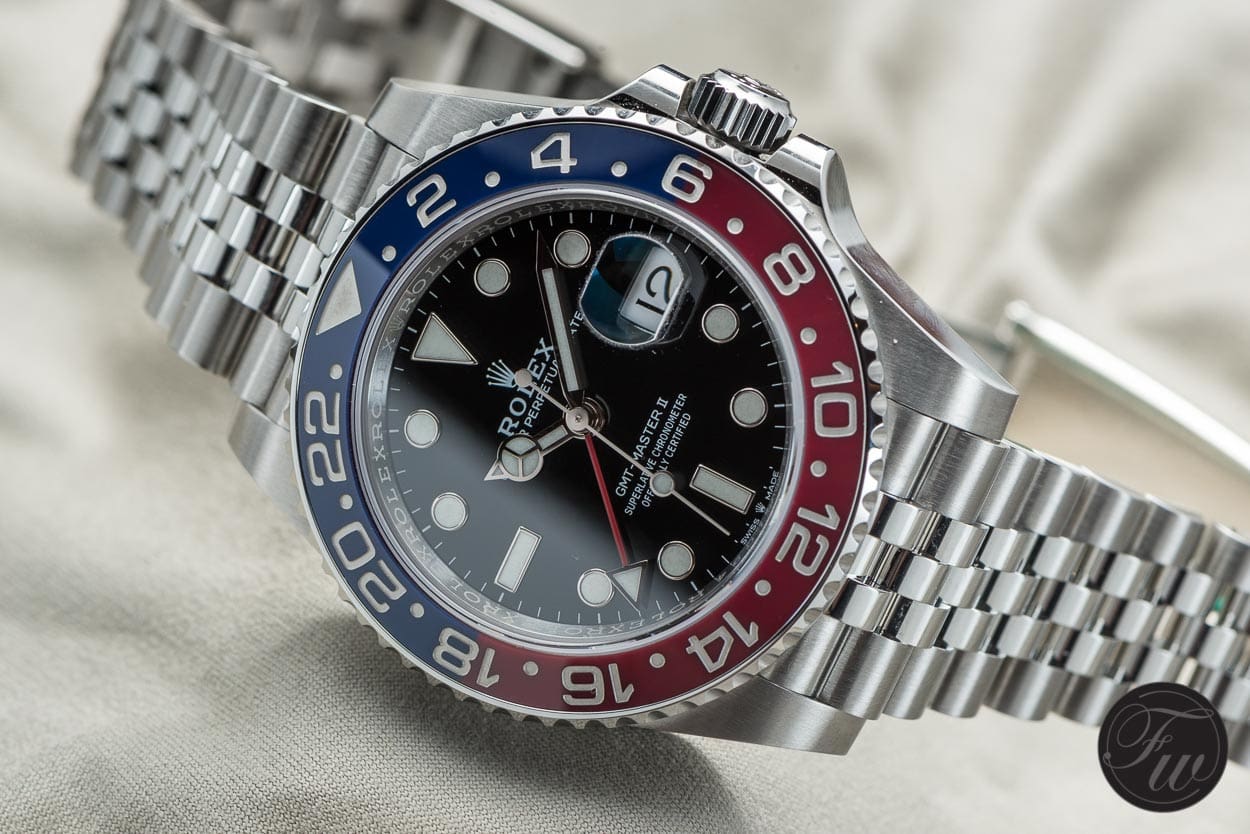 Of course, through time other brands also released watches with the primary colors blue and red included in the bezel. It seems like there are multiple views on the word ‘Pepsi’:

Personally, I like the first one the most. It was the first one. But, as with all nicknames, it’s a bit confusing and fuzzy. It is one of the aspects which forms the soil of this interesting hobby and multiple discussions. 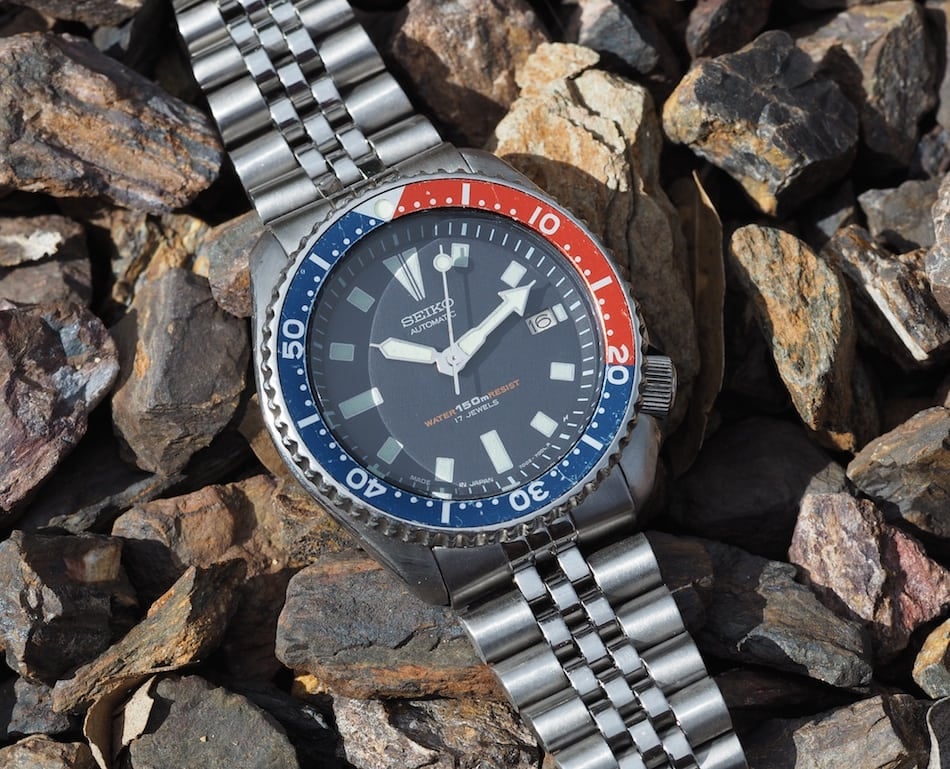 The Rolex GMT-Master II ‘Pepsi’ has a long and famous history. Unlike nicknames like ‘Hulk’ and ‘Batman’ it’s not clear when the watch was first nicknamed ‘Pepsi’. It’s a true icon and a grail watch for many. If you want to dive deeper into other details of this watch you’re in the right place. Balazs wrote an in-depth article about reference 1675 (link here) and we also published a GMT-Master history overview. 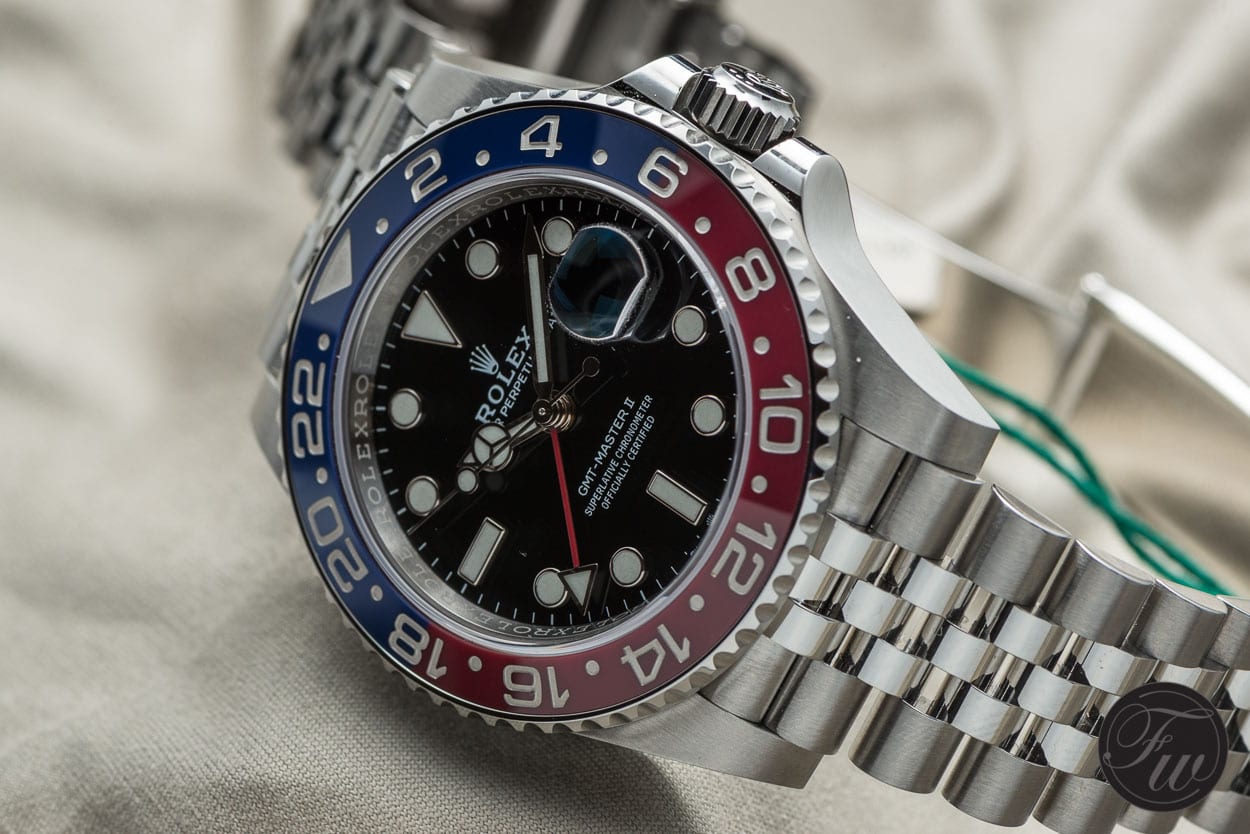 I hope your thirst is over now. See you in the next episode!

Ordering cartoon prints and stickers can be done via Watchesandpencils.com

Hot Topics
Introducing: The New Seamaster Professional 300M 60 Years Of Bond — With A Special Animated Case Back
105 comments
Are You Still After An Omega × Swatch MoonSwatch?
96 comments
It’s Time To Invest In A Dress Watch — Our Picks From Breguet, Omega, Grand Seiko, And More
73 comments
The Rolex Waitlist Conundrum — How Much Will The Price Of Your Watch Increase While You Wait?
50 comments
The Best Omega Speedmaster Watches Of 2022
40 comments
Popular
(From The Archives) Shut Up & Read The Truth About Cartier Watches
George Cramer
21
Introducing: The New Seiko Astron GPS Solar 5X series (Live Pictures)
Robert-Jan Broer
9
Hands-On Longines Legend Diver in Black Ref. L3.774.2.50.9
Robert-Jan Broer
1