The black SLA057J1 and the blue SLA055J1 relive the past, save the ocean, and wreak havoc on your wallet
Lex Stolk
comments 20
Share

As 2021 comes to a close, Seiko brings two Seiko Prospex 1968 Diver’s Modern Re-interpretation limited editions to the table that will break either your heart, the bank, or maybe even both. These diver’s watches borrow their looks from a vintage design, but are made using modern technology and materials. This is as you would expect, but the watches come with some design quirks. And the pricing of both watches could also take you by surprise.

In the second month of 2021, Mike was philosophizing about both Grand Seiko’s and Seiko’s brand strategies and what would come out of them. He talked about his struggles with press releases that referenced inspiration from nature, and he also foresaw a tidal wave of limited-edition celebratory models leaving the factories in Japan. But, if they were done right, he said, “bring it!” And Seiko sure brought it this year.

On my personal list of the Five Best Seiko watches of 2021, I mentioned the Prospex 1986 Quartz Diver’s 35th Anniversary LE S23635J1 and the Seiko 5 Sports 140th Anniversary LE SRPG47K1. And we must also not forget the Naomi Uemura 80th Anniversary Limited Edition. Just before the markets close and Christmas lists are fully checked, Seiko drops two Seiko Prospex 1968 Diver’s Modern Re-Interpretation watches — the black SLA057J1 and the Antarctic blue SLA055J1. Are these two tributes done right? Let’s go hands-on and find out. 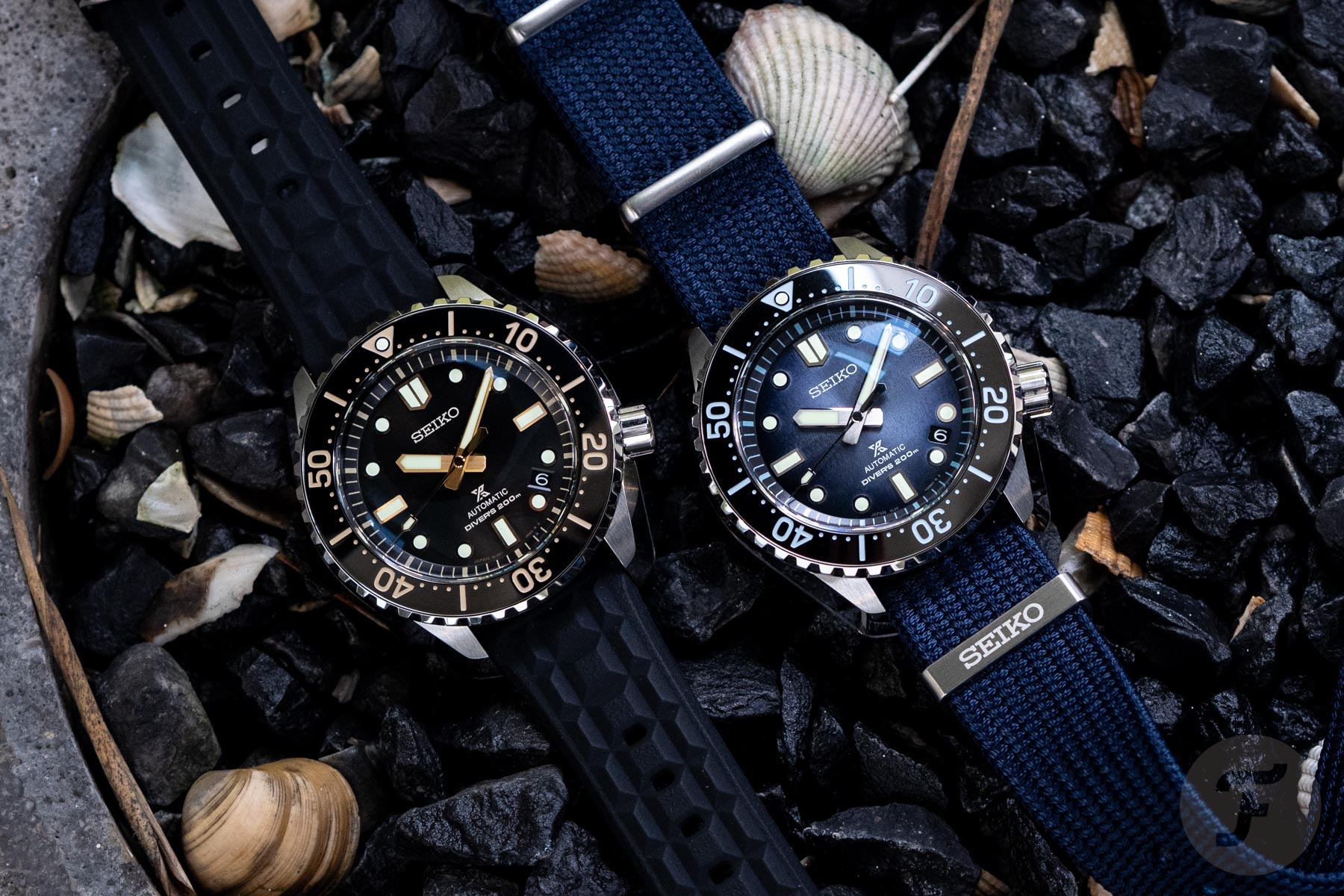 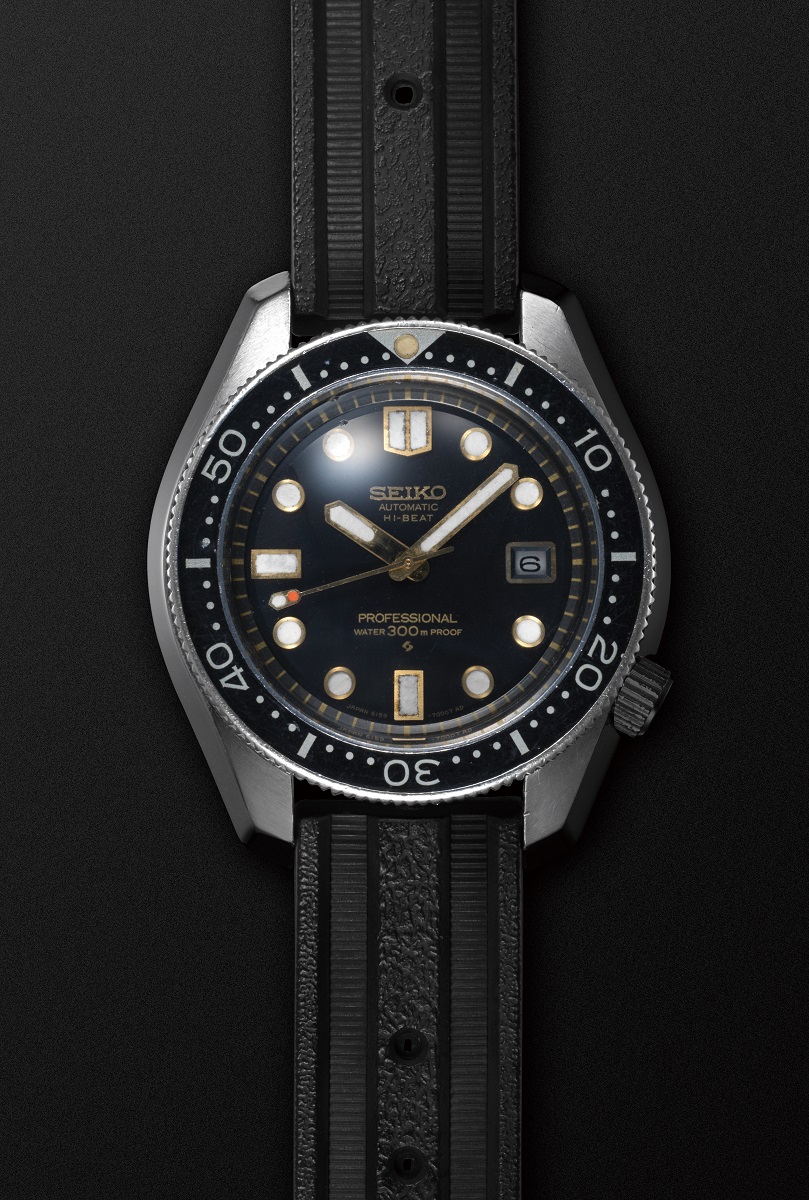 The full name is Prospex 1968 Diver’s Modern Re-Interpretation, and looking at the 1968 Automatic Diver 300m Hi-Beat ref. 6159-7001, you can sure see the resemblance. Both watches that come on a silicon strap are more nostalgic than the sharper, more contemporary-looking SPB185 on its metal bracelet. The prices are very different too, but please let me come back to that topic later on. 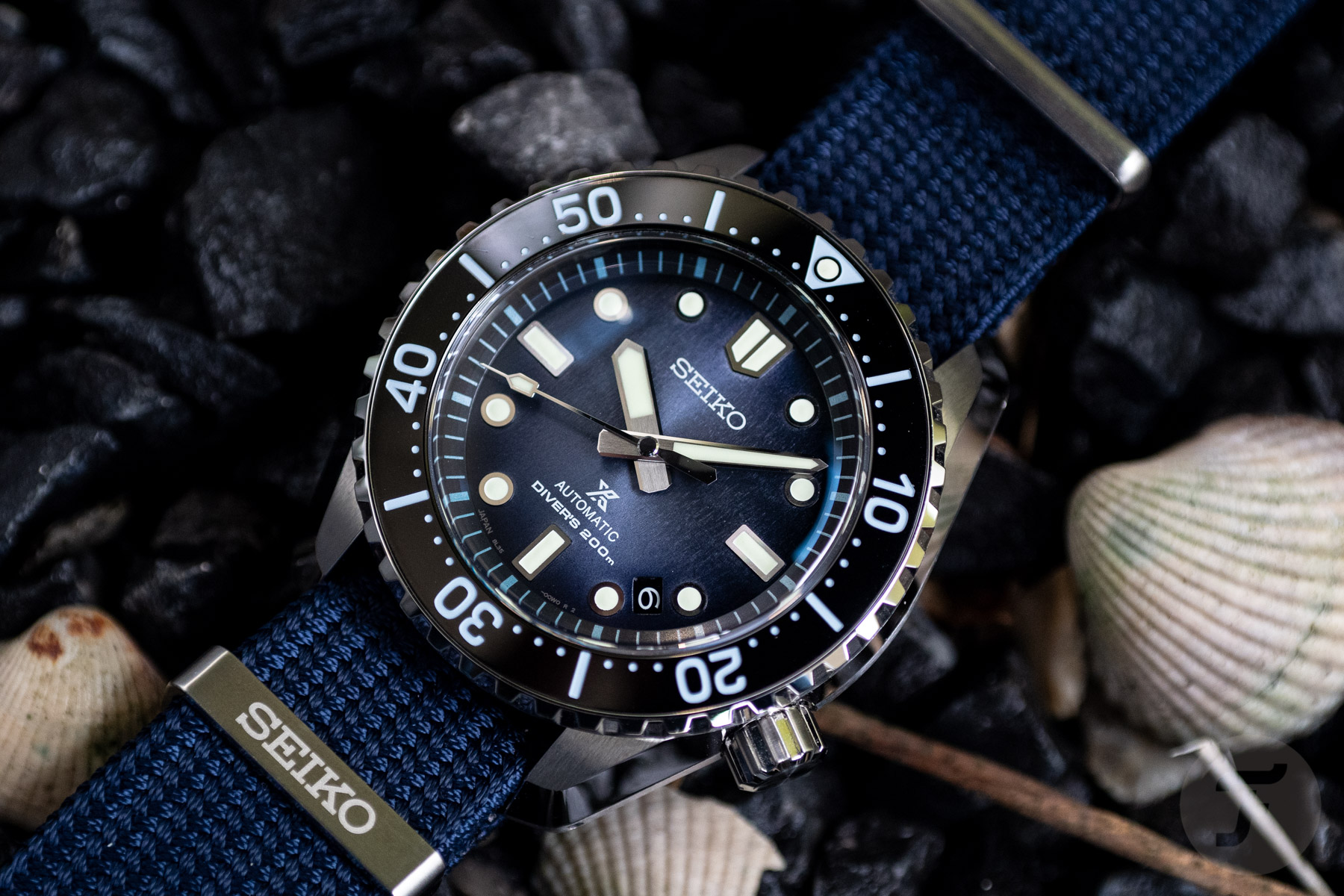 First, let’s take a look at the difference between the 1968 original and 2021 iteration. And there are quite a few differences indeed. The original watch shows the date at 3 and the crown at 4 o’clock, and those features are placed at exactly those positions. Both the SLA057J1 and SLA055J1 have the date between 4 and 5 o’clock, but as a result, the crown is just a little above the 4 o’clock position. At first, you don’t notice the — how shall I put this… — misalignment. But as is so often the case, once you see it, you can’t unsee it. The area between 3 and 5 o’clock is a space where a lot of lines cross each other, instead of playing nicely together as they do on the original 1968 watch. 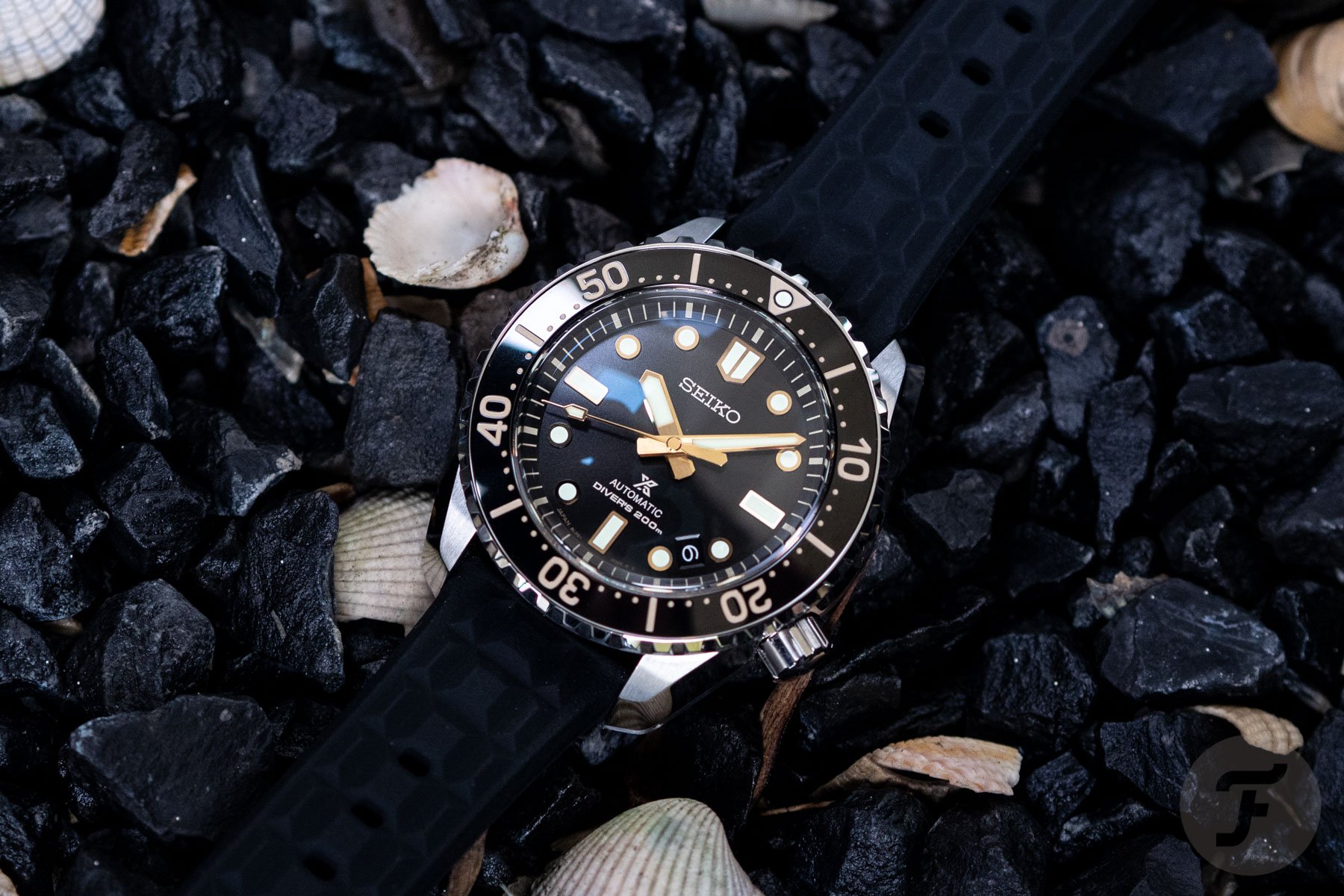 Eight beats instead of 10 beats a second

Inside the 200-meter water-resistant, 42.6mm × 13.1mm case beats the automatic caliber 8L35. This 4Hz, 50-hour power reserve movement is based on the Grand Seiko caliber 9S55, and it was specially designed for use in dive watches.

Not a Hi-Beat 36,000 movement like in the original, and I can’t help wonder why.

The movement with 26 jewels is made by hand in the Shizuku-ishi Watch Studio in Morioka in the north of Japan, and it has a rating of -10/+15 seconds per day in normal temperature conditions. But it’s not a Hi-Beat 36,000 movement like in the original, and I can’t help but wonder why. Why not put the 8L55 inside? Not that you will see any of this fast-beating caliber, because the movement is hidden beneath a screwed case back with an engraving of a wave. But for history’s sake! And for the price! But I will address that subject in a bit. 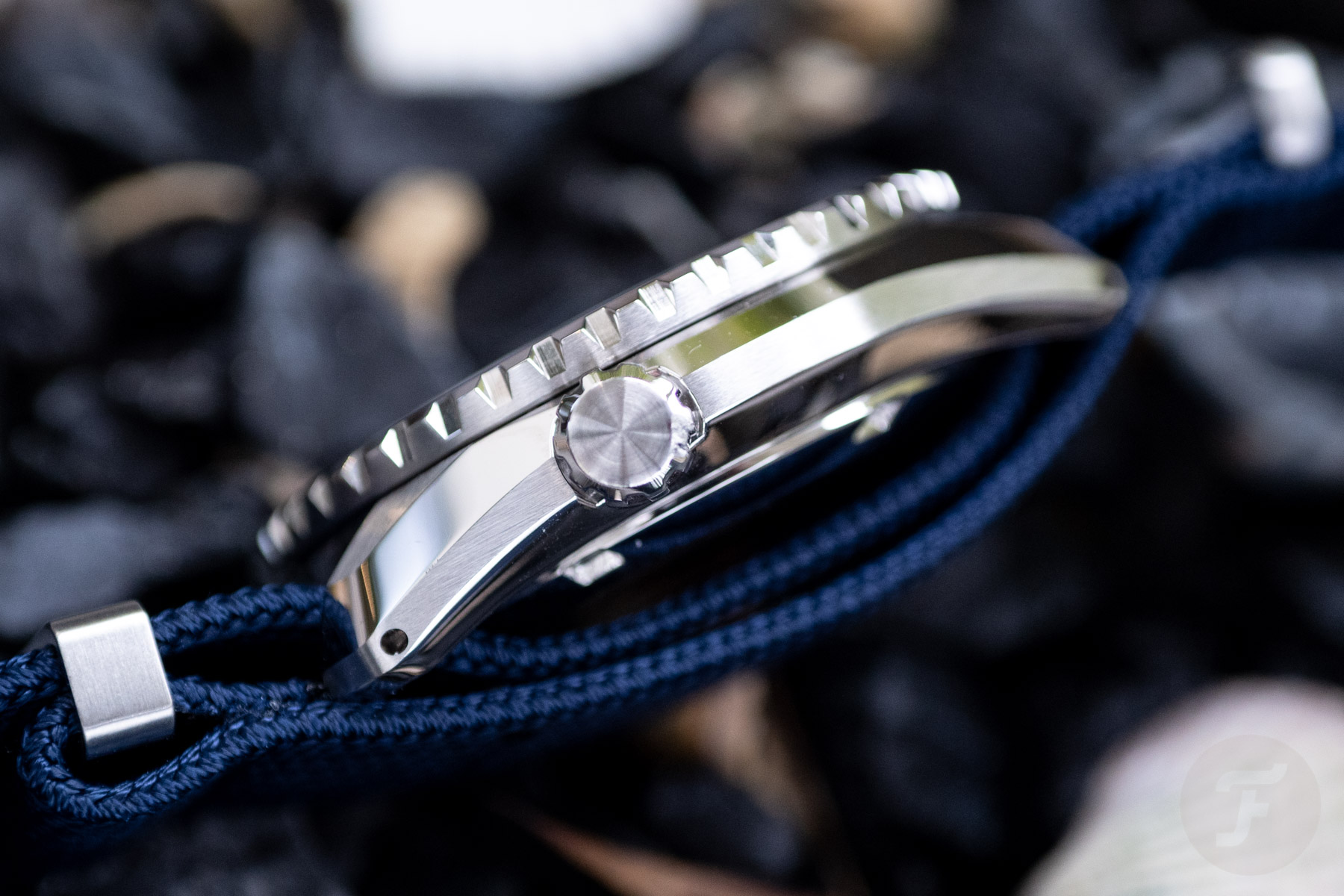 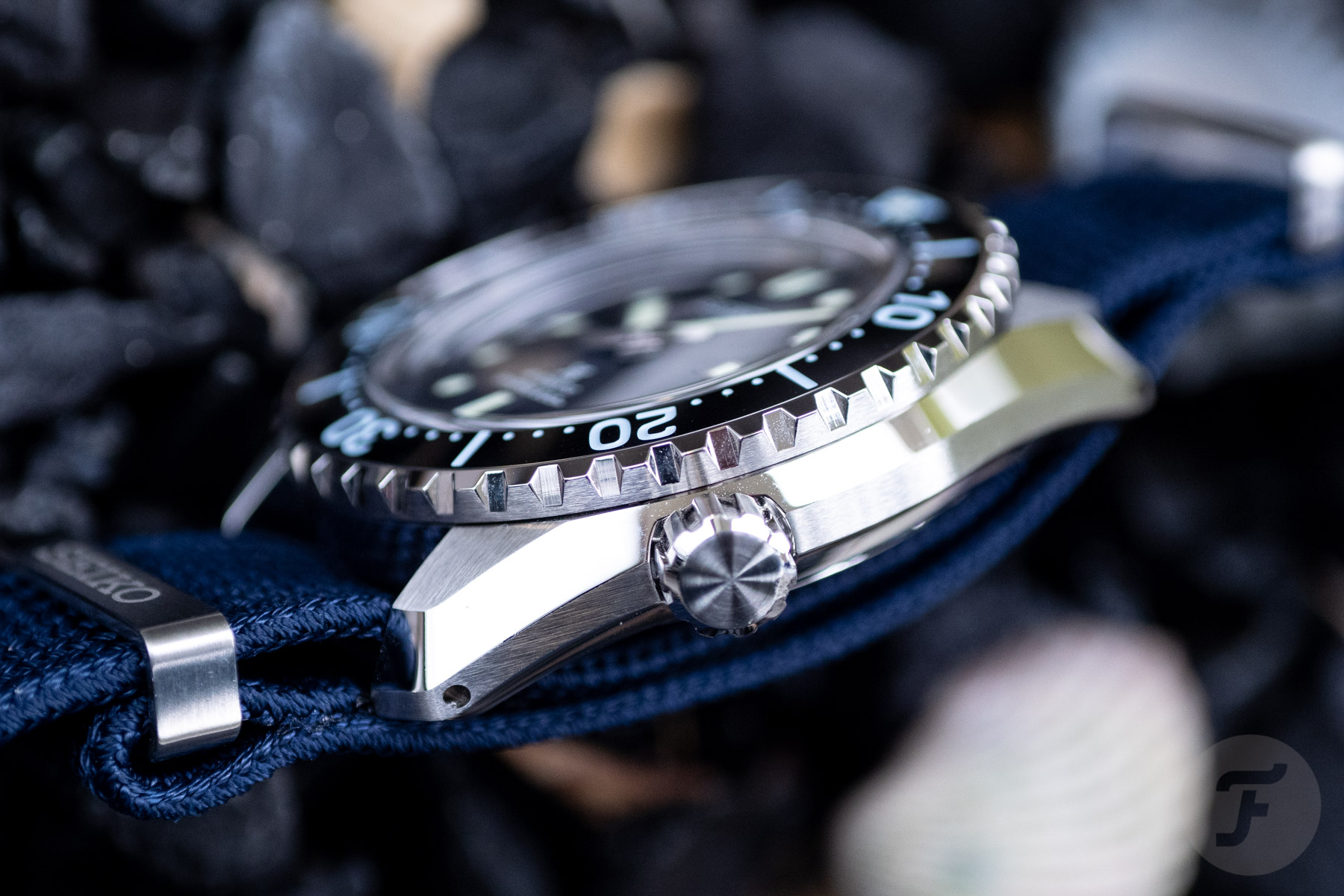 Apart from the very soft and comfortable silicon strap — a definite upgrade from the stiff rubber straps of yesteryear — both watches come with an extra fabric strap. The black and blue polyester NATO straps are made by using seichu, a traditional Japanese braiding technique that results in a soft and strong strap. It was introduced earlier this year on the SPB239 and SPB237 and creates nothing less than a luxurious wrist feel. It’s also quite thick, thus making the watch sit a bit high on the wrist. There’s also an issue with the strap if you have 18.5cm wrists like me. You can’t simply fold the excess fabric of the strap back into the last keeper like you would do with a standard NATO strap. What you can do, though, is slide the keeper next to the buckle to a position into which you can slip the leftover part. 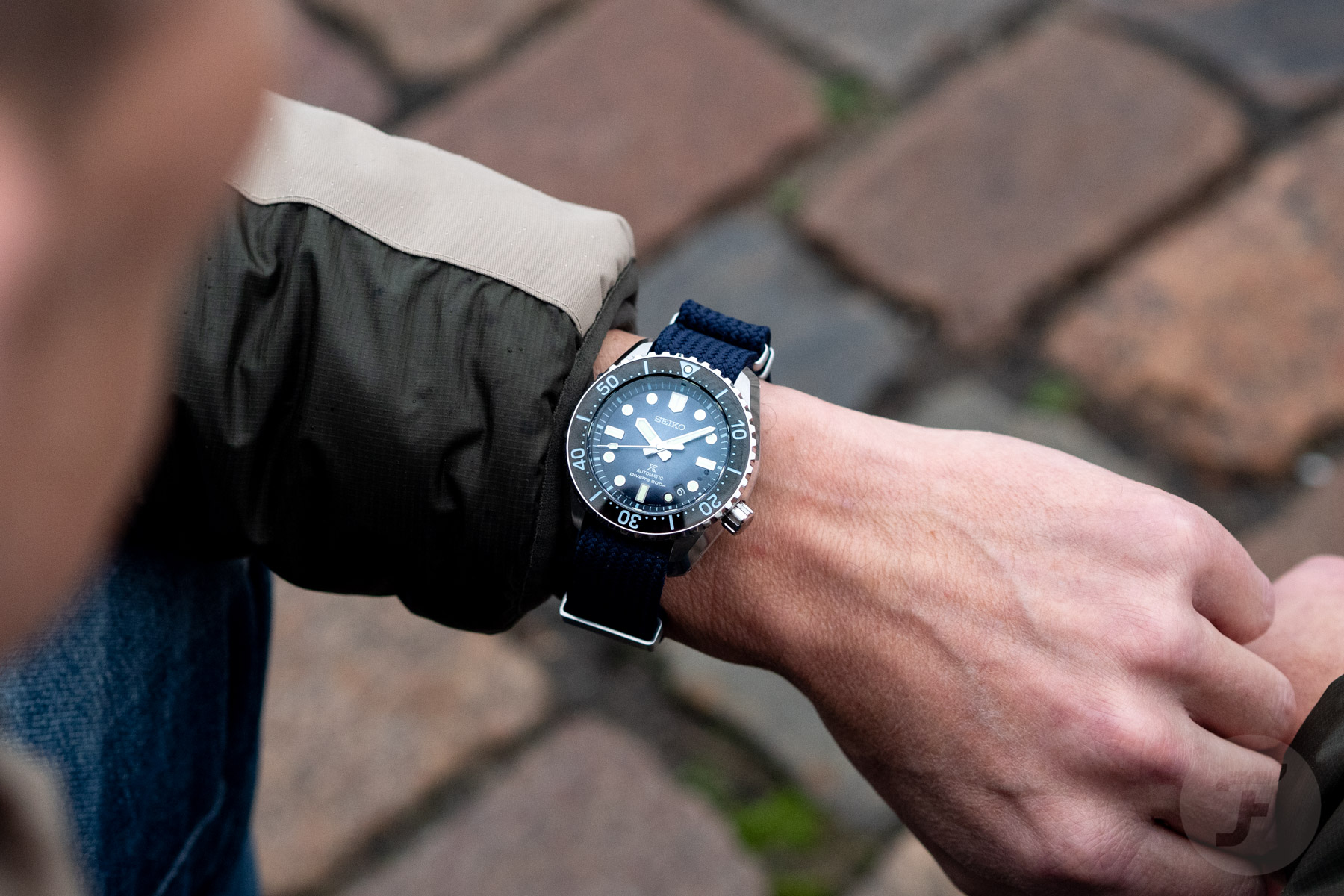 Maybe it’s a good idea to disclose the price before I go on about the specifications and wrist feel. Both watches have a price of €4,600. The black SLA057J1 is a limited edition of 600 pieces, and the Antarctic blue SLA055J1 is produced in a limited run of 1,300 watches. For the money, you get a 200m diver’s watch in an Ever-Brilliant Steel case with a screwed case back and a screw-down crown. The latter doesn’t screw directly into the case but into a special component, ensuring easy repairs. 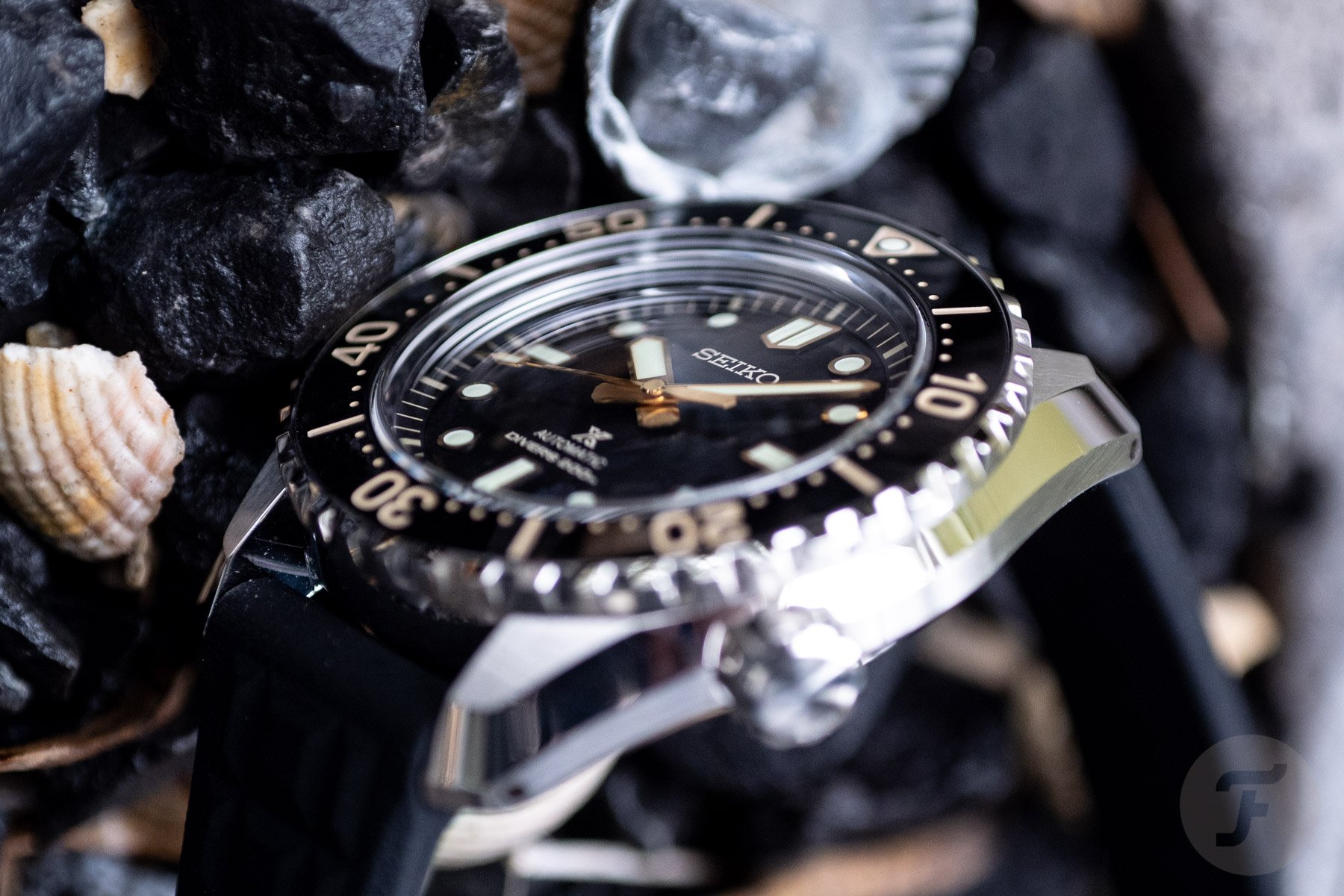 The watch is also antimagnetic to 4,800 A/m, with a vintage-looking dual-curved sapphire crystal with anti-reflective coating, as well as LumiBrite on hands and indexes. As you would expect, both watches feel solid and look solid. The black SLA057J1 is the more conservative one. It stays close to its ancestor with gold accents on the indexes and hands, and it has a warm presence. 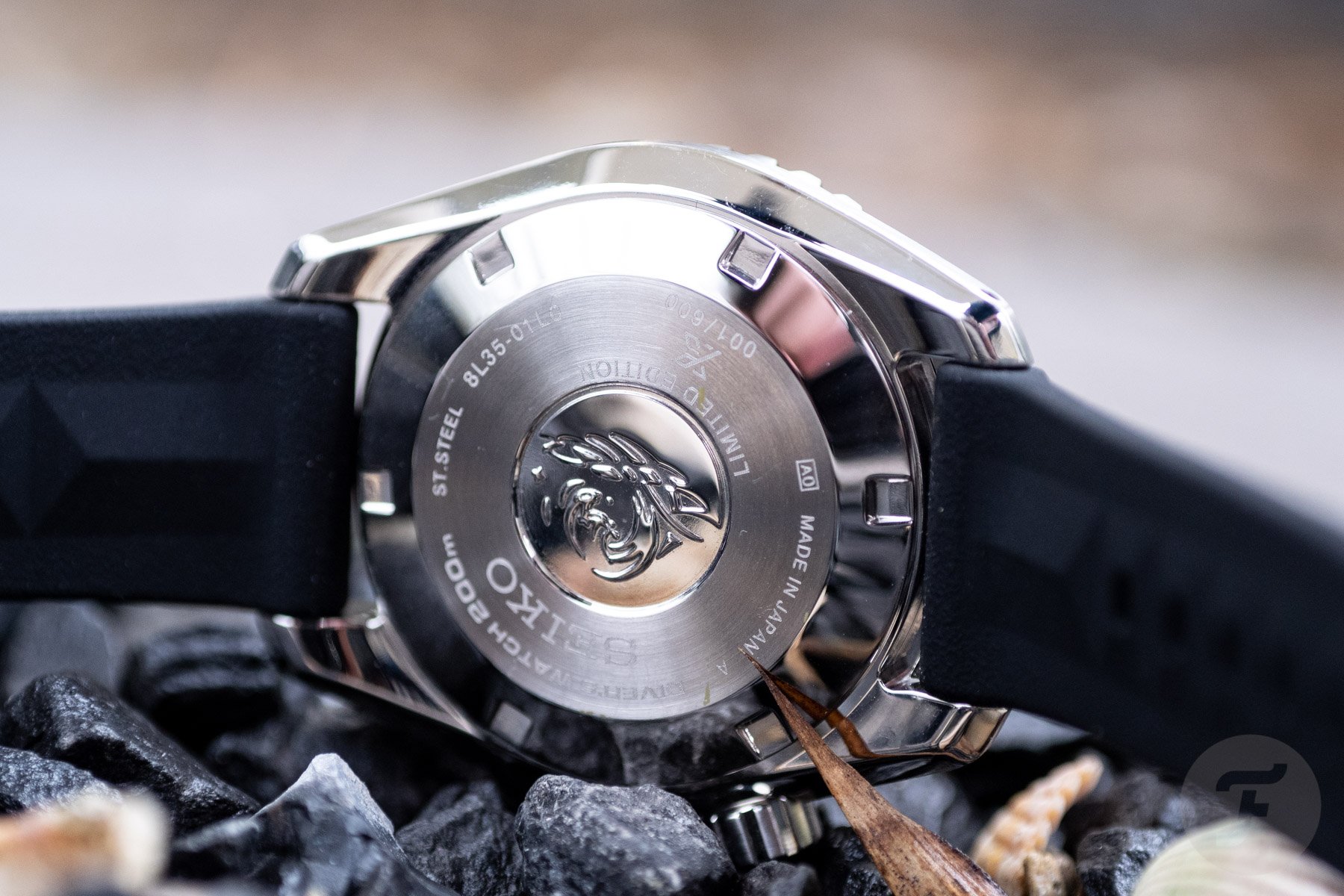 The Antarctic blue SLA057J1 has a cooler, much more contemporary look. Its color tells the story of former polar expeditions in which Seiko watches were involved. It also references the upcoming 63rd Japanese Antarctic Research Expedition (JARE). This watch will be on the wrist of the mission’s members venturing into the frozen continent. The gradient blue dial with a subtle gradation fits the theme. But the light blue numerals and indications on the bezel are maybe a bit too much. It’s a bit of a color gimmick on a watch with serious pedigree. On the other hand, at least it’s not retro. You be the judge if the iceberg blue details are a hit or a miss. 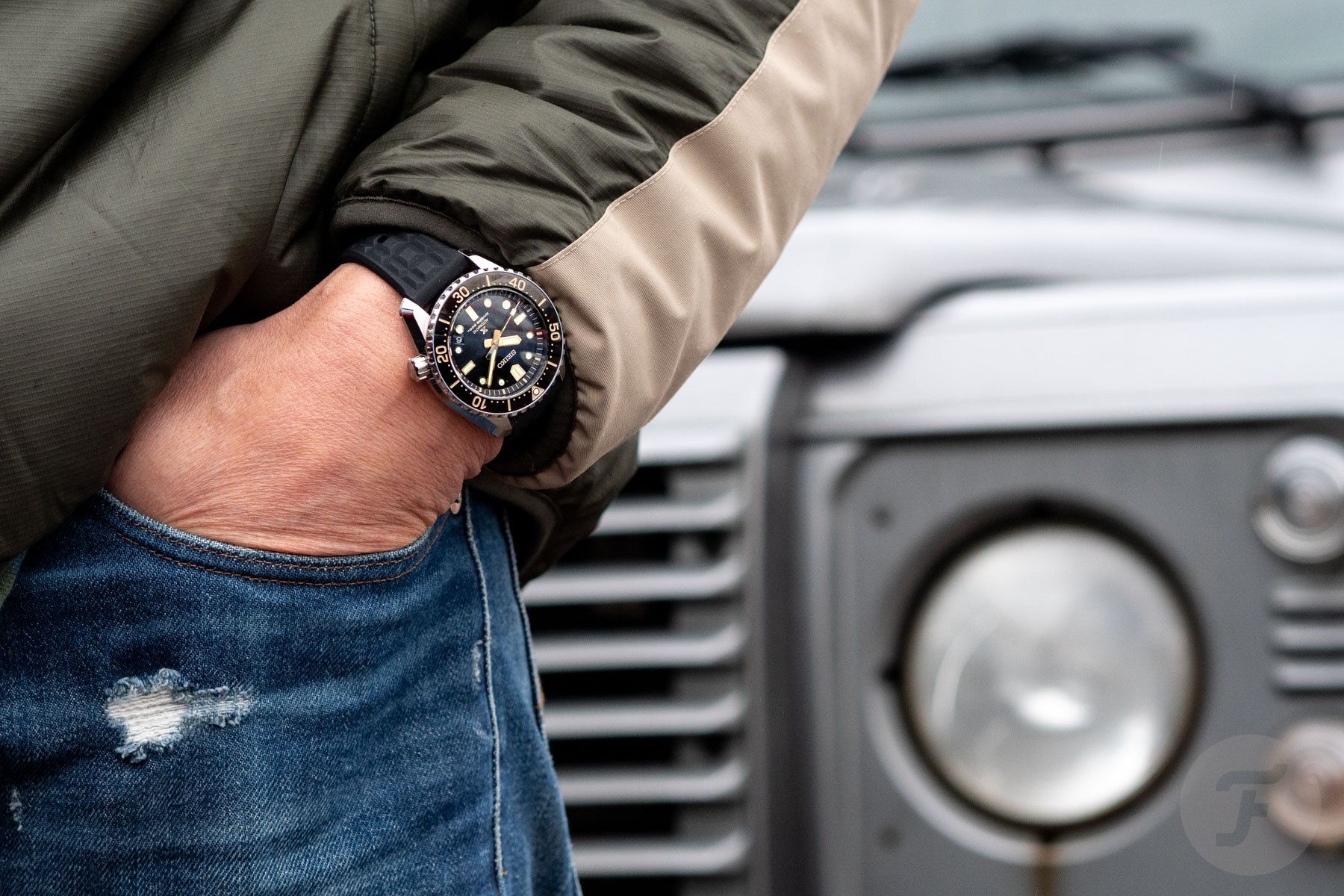 Pondering the meaning of the black SLA057J1 and blue SLA055J1

When you talk hit or miss, you end up talking about the price of both the black SLA057J1 and the blue SLA055J1. Both €4,600 watches are more or less in line with the SLA017, a tribute to the legendary 62MAS that Seiko released in 2017. That re-edition of the 62MAS, or reference 6217-8000/1 from 1965, had a price of €3,800. Although the two new watches are part of the Seiko Prospex Save the Ocean series, which supports several contributions to the conservation of the marine world, I don’t believe that really explains the €800 price difference. But maybe that doesn’t matter if you’re on the lookout for a superbly made, substantial diver’s watch with stories to tell and a design that hits the spot… and you were thinking of making a (huge) donation to any kind of charity that wants to save the planet’s oceans, that is. 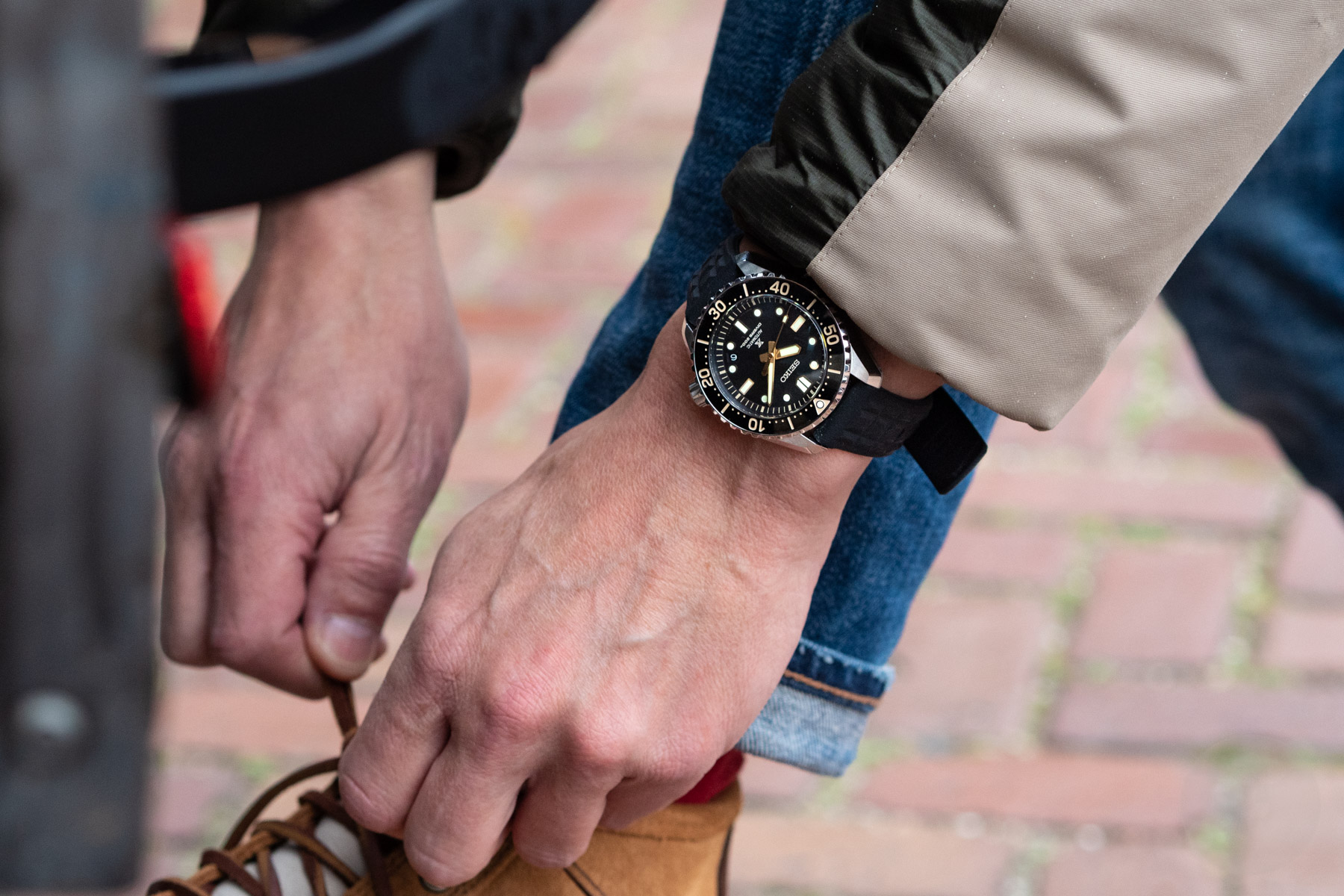 Last piece of the puzzle

There are two last nagging thoughts that I just can’t seem to shake. They’re regarding the movement and the water resistance. There seems to be a puzzle that paints the full picture of the past and present Seiko dive watches that are, in one way or another, related to the 1968 Automatic Diver 300m Hi-Beat ref. 6159-7001. But putting that puzzle together is already difficult enough.

… putting the Seiko puzzle together, when dealing with limited editions that pay tribute to a vintage watch, becomes increasingly difficult.

Where do I put the piece that says “200m” instead of “300m”? And why is there an 8-beat-per-second movement inside the case, and not a 10-beat-per-second movement like in the primal watch? Maybe it’s just me, but when dealing with limited editions that pay tribute to a vintage watch, putting the Seiko puzzle together becomes increasingly difficult. 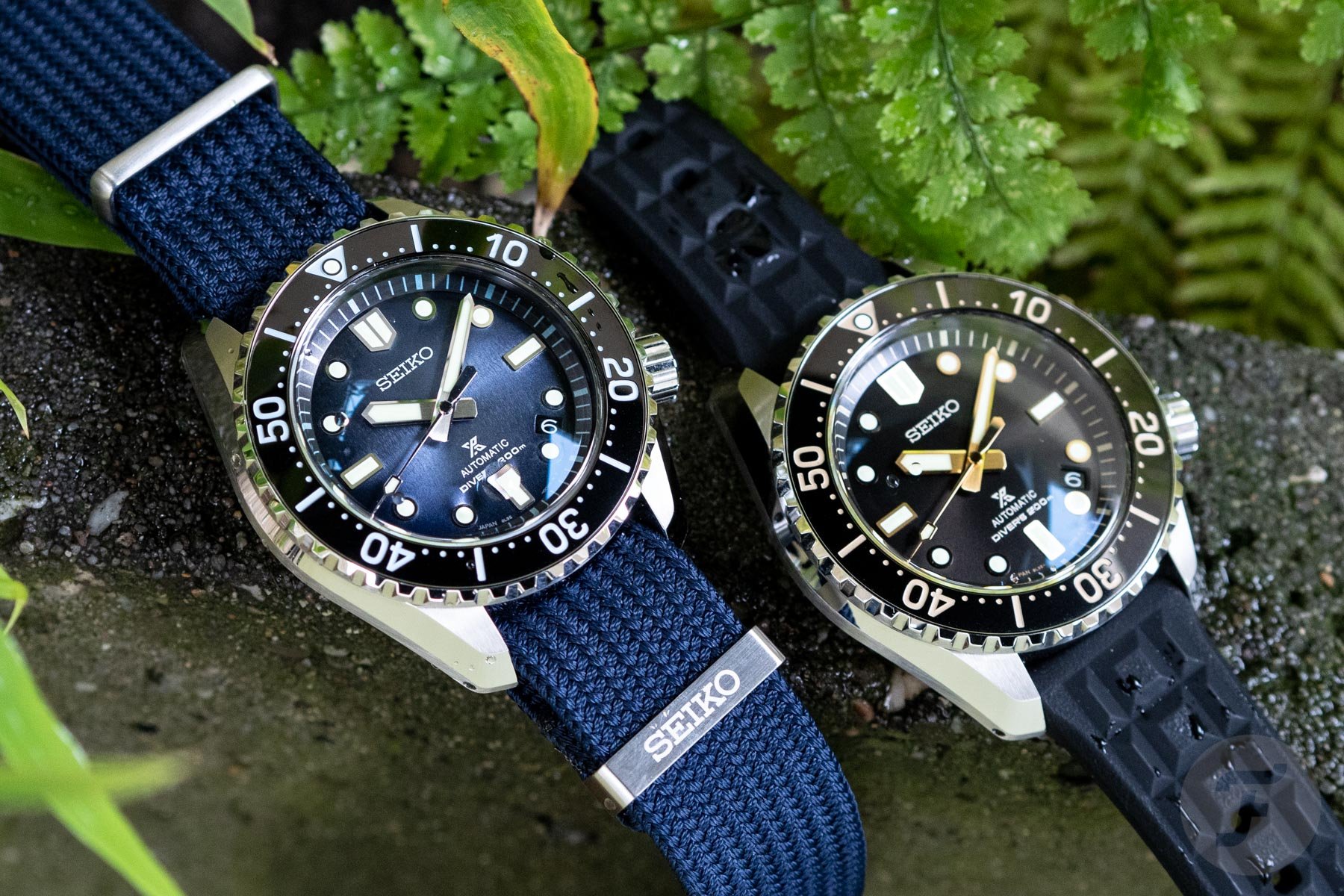