Sinn 1800 S GG Damaszener — Does It Cut Through Time Like An Ancient Sword?

When the Crusaders reached the Middle East in the 11th century, they came in way too close contact with swords wielded by Muslim warriors. The blades were made of a particular metal sharp enough to slice a hair in half. Yet the same swords were strong enough to pierce through armor. Needless to say, these weapons struck fear into even the bravest and persistent God-fearing warrior trying to conquer the Holy Land. And now, there’s the Sinn 1800 S GG Damaszener. It’s not a sword, but a watch, of course. Still, the question remains: does the watch cut through time like an ancient sword?

Damascus steel, also known as Damascened steel, takes its name from the capital of Syria. But based on archaeological evidence, the production of this special metal started in present-day Tamil Nadu, in the southernmost part of the Indian subcontinent in the mid-first millennium BC. The metal was derived from wootz, a type of steel originating in India that is unusually rich in carbon. The Arabs introduced the Indian wootz steel to the city of Damascus, where a weapons industry thrived. From around the fourth century A.D., Damascus steel was manufactured in several locations around the Middle East.

What made the swords from Damascus steel extraordinary was that the blades remained devastatingly sharp and tough through battle after battle. The formidable blades were easily recognizable with their characteristic watery “damask” pattern — a remarkable feat of engineering and aesthetic beauty. Sometime in the 18th century, the formula for Damascus steel was lost, and the original remains a mystery. 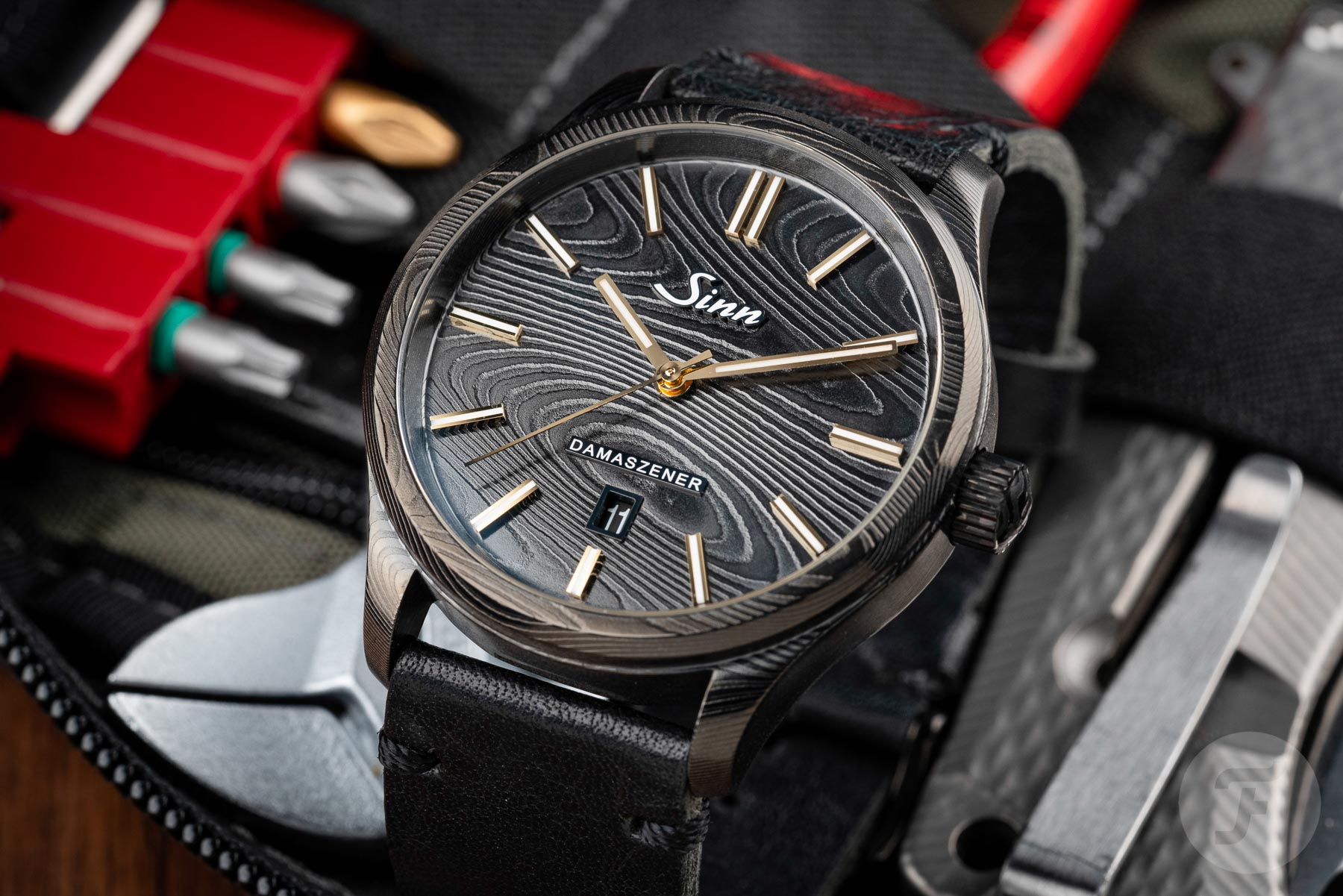 So how was the Sinn 1800 S GG Damaszener created? The short answer is, by using modern Damascus steel, or damaszenerstahl in German. This new alloy is made from various types of steel and iron slices welded together to form a billet. As you might have already guessed, the currently used term “Damascus” is technically incorrect. Still, it’s widely accepted to describe modern pattern-welded steel such as Damascus. The “damask” patterns vary depending on how the smith draws out the billet and the number of times he folds it. To give you an impression of the complexity and time it takes to create modern Damascus, in order to attain a Master Smith rating with the American Bladesmith Society, a smith must create a Damascus blade with a minimum of 300 layers. 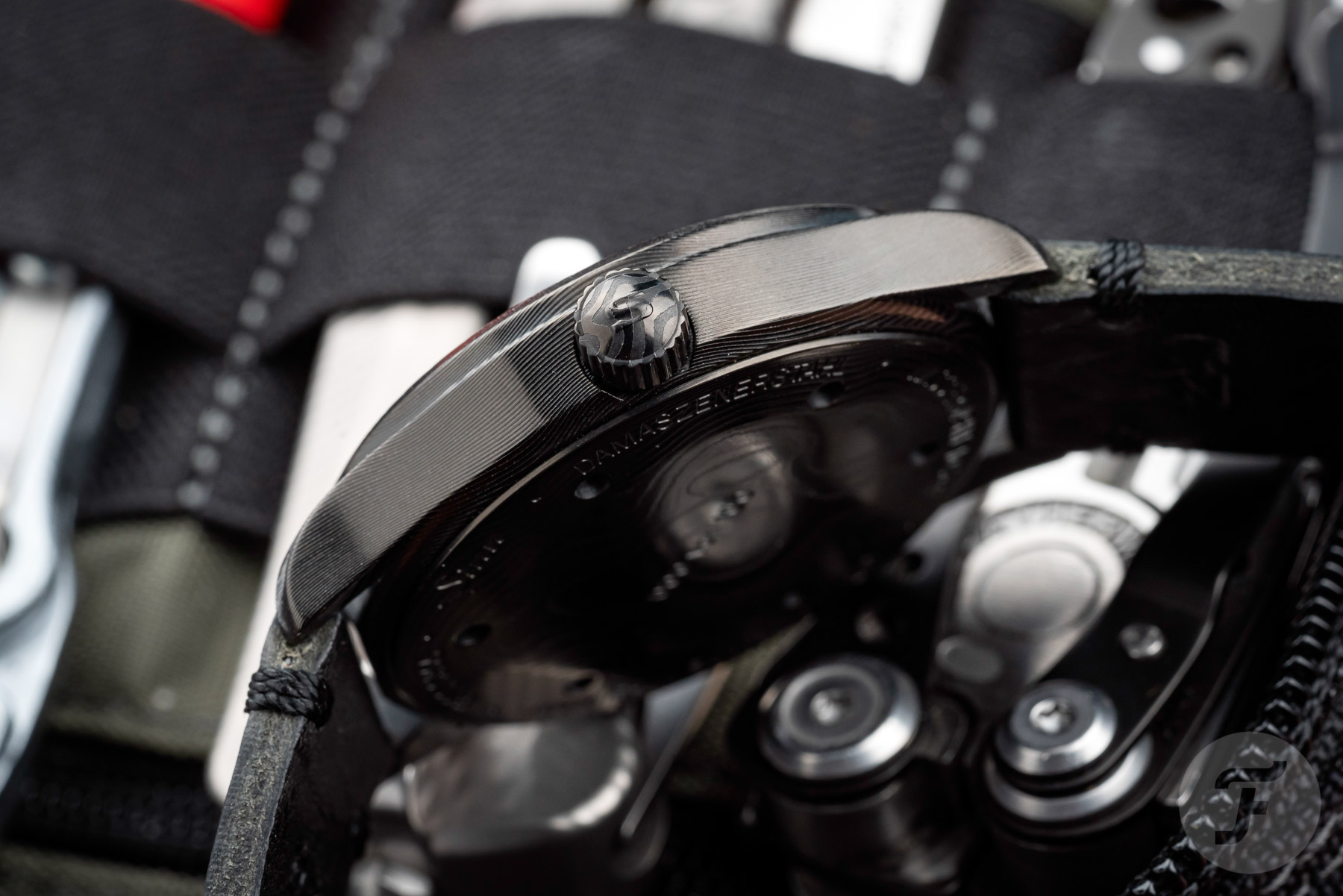 Sinn uses (modern) Damascus that is made from two types of steel. The 100-piece, limited-edition 1800 S GG Damaszener marks the first time the Frankfurt-based brand has used the contemporary version of the legendary steel. The individually numbered 1800 S GG Damaszener has a case made by the experts at Sächsische Uhrentechnologie GmbH Glashütte (SUG).

It’s not an easy task for SUG. But the final result showcases the organically flowing pattern in a subtle, almost sinister, and undoubtedly intriguing fashion. The one-piece dial and central part of the case are forged from a single steel block. In doing so, it uniformly blends them together, with alternating light and dark waves creating an impressive final product weighing just 78 grams. Sinn uses both its TEGIMENT technology and an additional Black Hard Coating to make the case extra resistant to scratches. 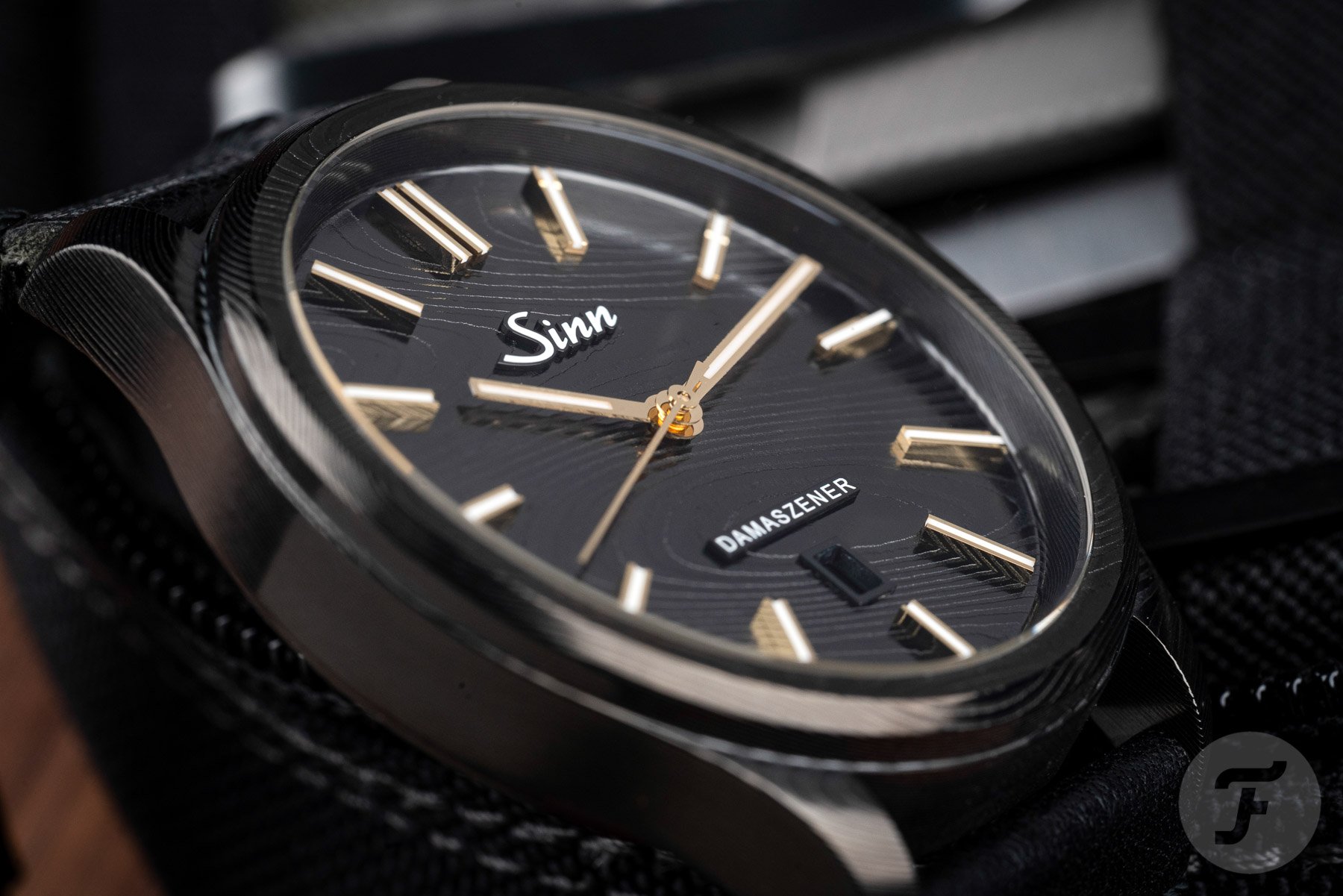 The black coating also has a visual side effect: it enhances the impression of the pattern while at the same time increasing readability (please compare it to the uncoated 1800 Damaszener). On the dial, the 18-carat gold applied indexes match the lume-filled hour, minute, and seconds hands in the same material. But when looking at the hands, though, I must say they puzzled me.

Sinn positions and presents the 1800 S Damaszener as a chic, elegant watch. But the hands are just no-frills stick hands. Why not feuille or dauphine hands? And then there are the two straps that come with the watch — two rugged, vintage-looking leather ones with a width of no less than 22m, no taper, and outfitted with big buckles. They’re not unlike the strap of the purely instrumental 717 Cockpit Wristwatch Pilot’s Chronograph. Quite frankly, I think the look clashes with the lush “damask” pattern on the face and case of the watch. 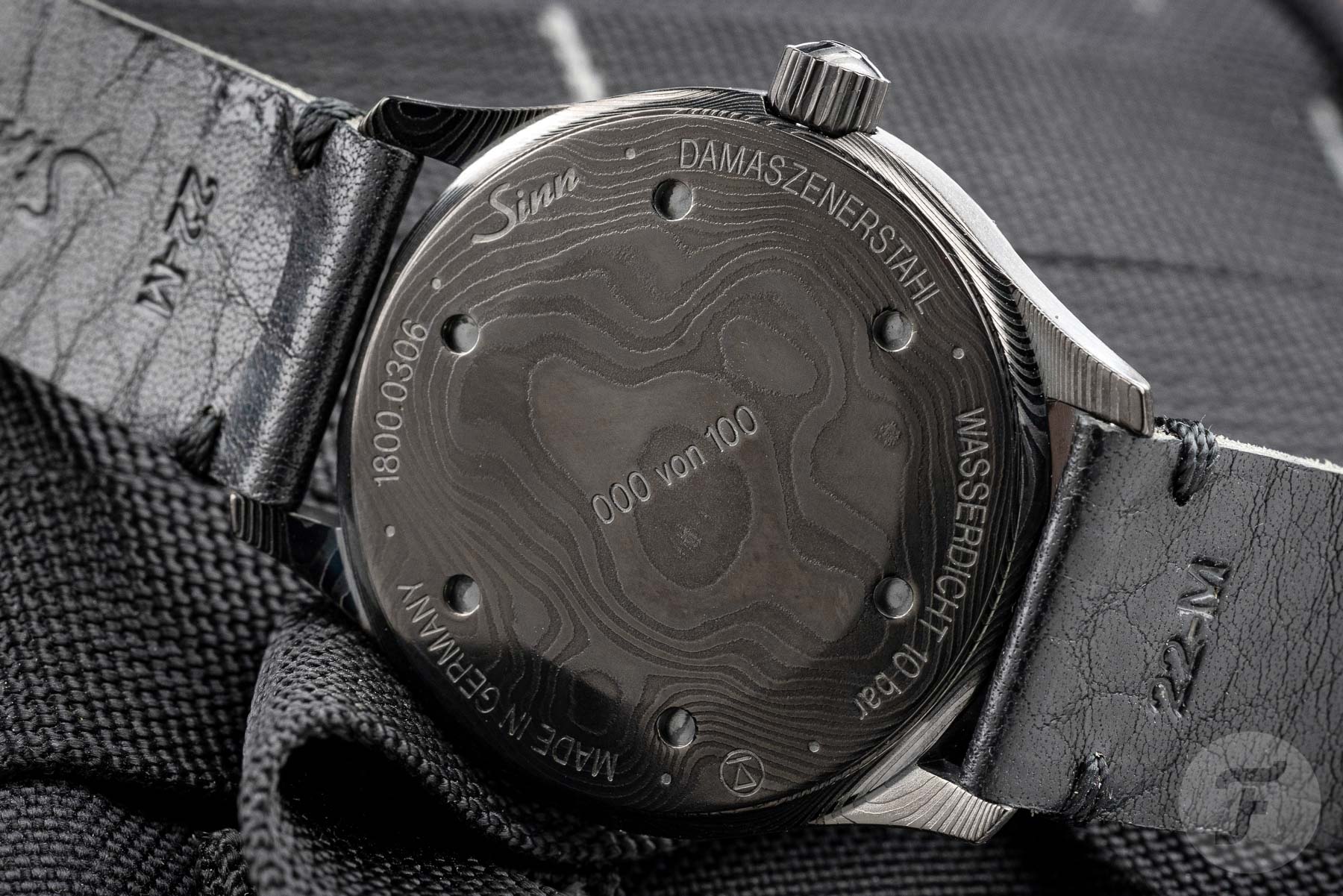 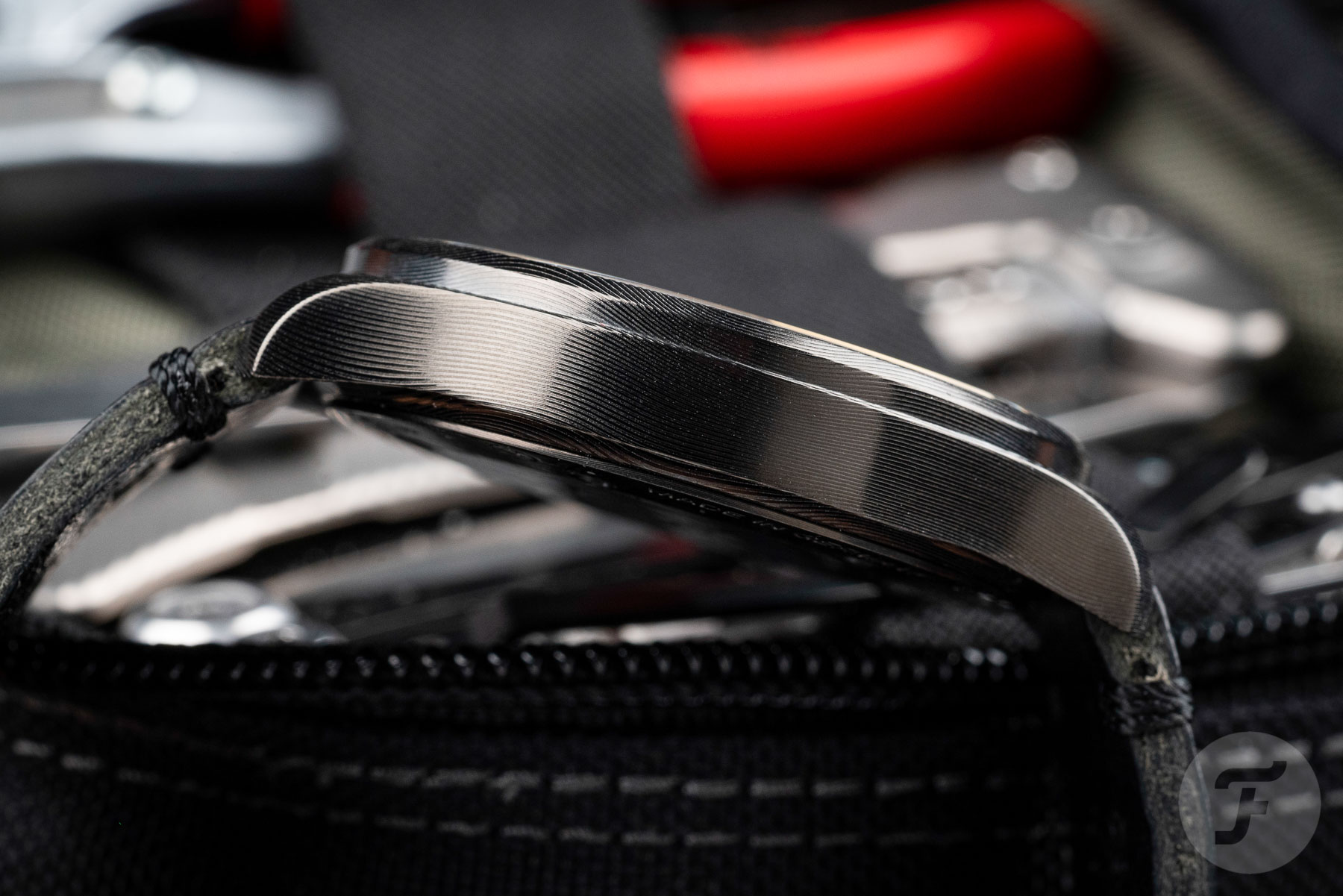 The case, which, by the way, measures a not-very-dress-watch-like 43 × 10.4mm, is pretty straightforward in terms of its shape and silhouette. Its 10-bar water resistance is pretty practical indeed, but again, not something you need from a decorative timepiece. Inside the case beats the relatively thin Sellita SW300-1 with bidirectional automatic winding and 42 hours of power reserve. It also has a stop-seconds function and is anti-magnetic, as per DIN 8309. 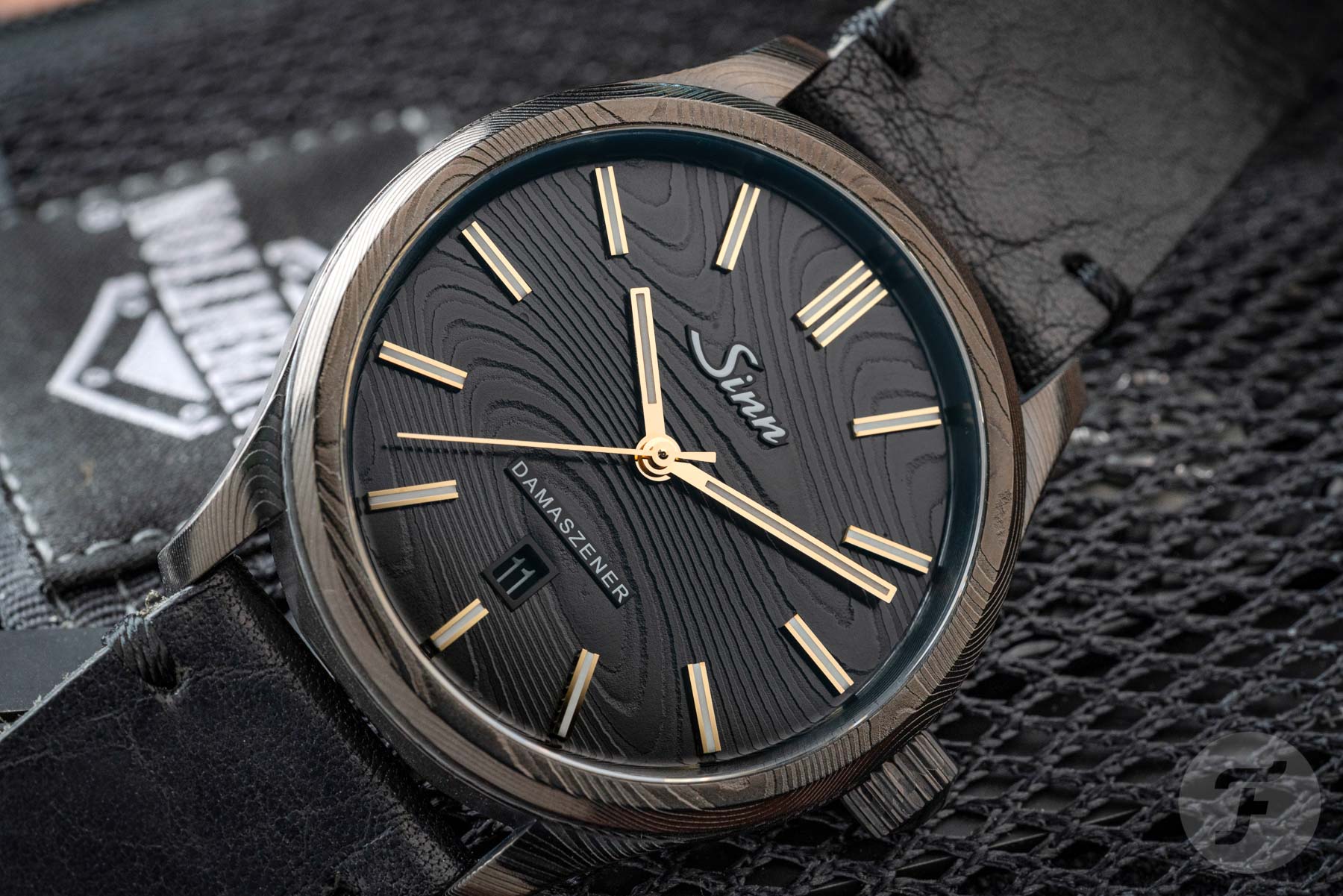 The Sinn 1800 S GG Damaszener has a price of €8,250. Did this price cut you like a blade? The price is largely the result of the very elaborate production process of Damascus. Sinn gets its steel from German firm Balbachdamast, the company that perfected the forging technique required to create contemporary Damascus. After folding soft and hard steels over and over again, the characteristic “damask” pattern becomes visible through surface etching. The next process involves acid to dissolve the different high-grade steels to varying extents. The biting acid forms the typical light and dark nuances that give every 1800 S GG Damaszener a unique look. It’s impossible to control the flow of the acid, and thus, a one-of-a-kind pattern emerges. 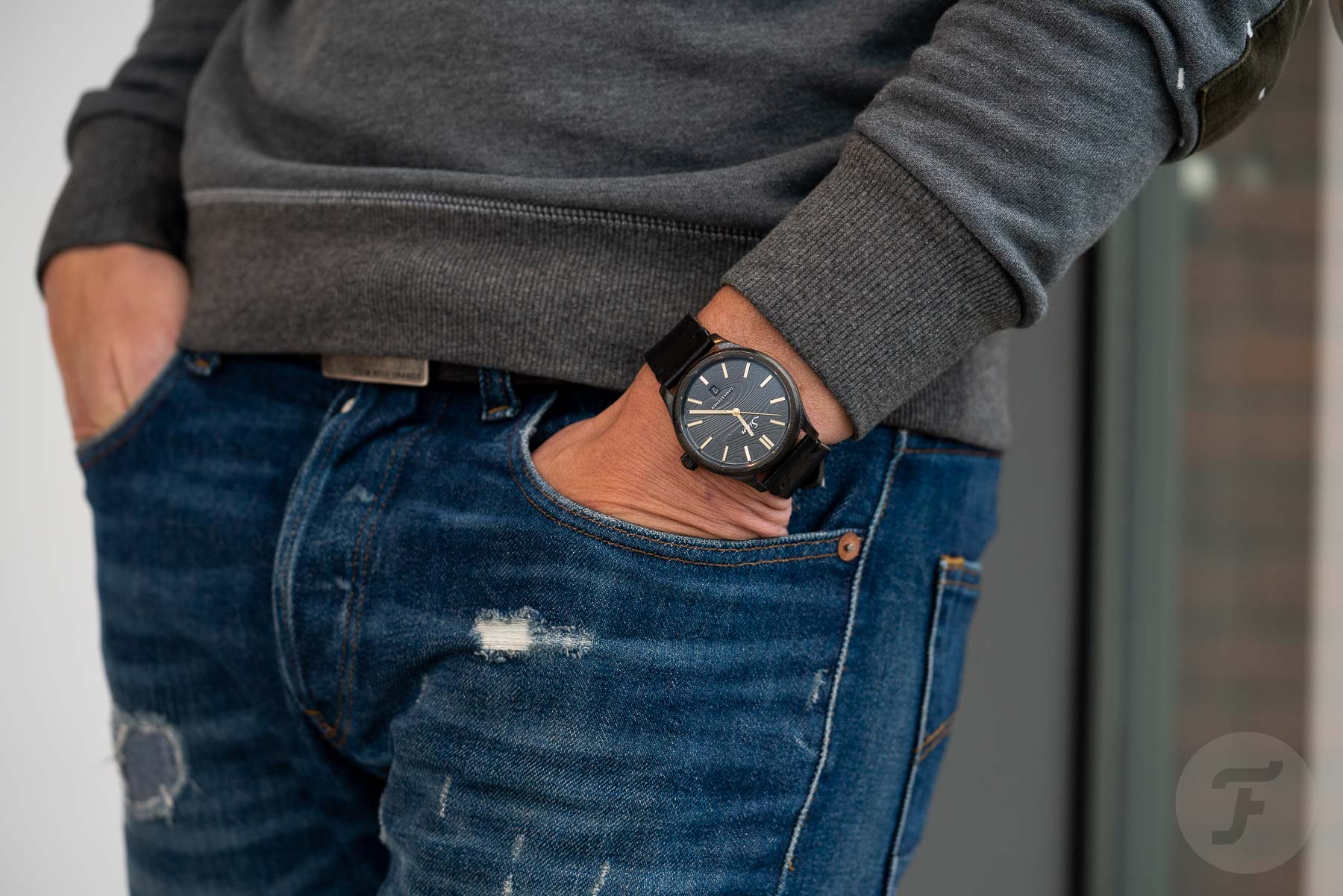 Let me conclude by saying that a Damascus steel watch is an acquired taste. I do appreciate a high-end Damascus steel kitchen knife. And since I’ve always been a history guy, the idea that ancient Damascus steel is surrounded by a bit of mystery and legend also helps stir my interest. That, and the intriguing construction of Damascus steel — hard steel sandwiched between softer steel, where the hard material creates a sharp edge and the softer alloy acts as protection. Is the 1800 S GG Damaszener to my taste? Not really. I think it’s a tad too big for my wrist. And my brain can’t unify the dressy, decorative use of the Damascus steel and gold details with other, more pragmatic, and sober features. It’s a balancing act I just can’t pull off mentally. But I’m sure there are a hundred people worldwide with more flexible minds who can. 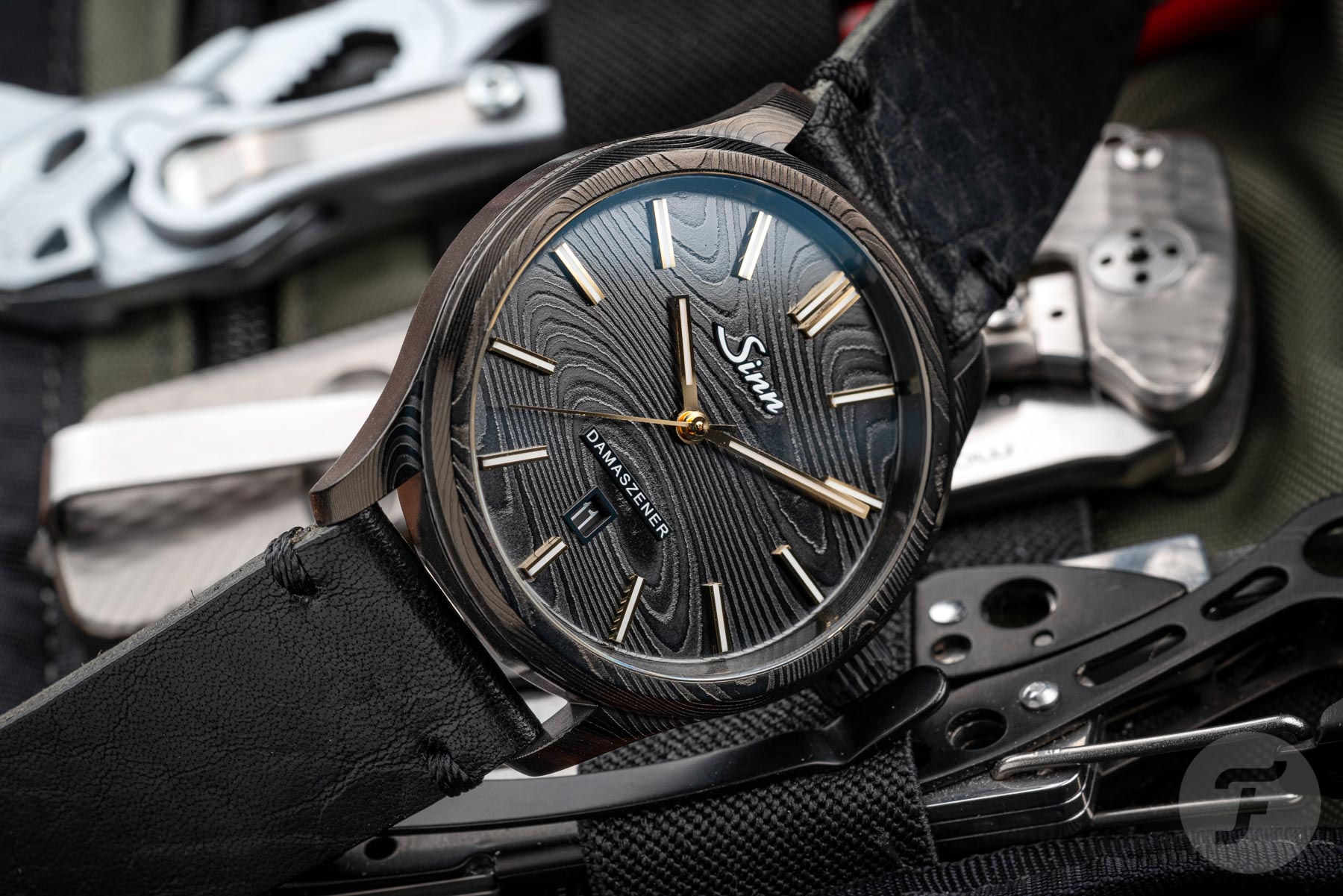 Final question: does the Sinn 1800 S GG Damaszener cut through time like an ancient sword? Nope! That’s because the hands are in gold instead of Damascus steel. It was a trick question.

Sinn is not the only watch brand that uses Damascus steel. You might know of the hand-forged Damascus steel GoS Watches from Sweden. Johan Gustafsson forged these special watch cases until 2021 when Swedish master bladesmith Conny Persson joined GoS. Metalworking has a long history in Sweden, and some historians believe that 10th century Vikings learned to forge superior Damascus steel sword blades from Middle-Eastern blacksmiths with whom they came in contact on their travels.