In The Wake Of Greatness: Hands-On With The Speake-Marin Ripples

Another attempt at creating an ultra-luxurious sports watch to satisfy the hunger. But does it stand a chance?
Lex Stolk
comments 19
Share

The Speake-Marin Ripples is uh… well… It’s a watch, for sure. If you can look past the Royal Oak and Nautilus aura, it’s even recognizable as a Speake-Marin. But only if you know the relatively small brand, that is. If you do, you will recognize the “Big Ben” hands. The small seconds at one-thirty are also an element typical of Speake-Marin. The shape of the case, not so much. “Because it’s a new watch for the brand,” you say? Yeah, that too. But it’s also the mishmash of different “borrowed” design elements. Okay, I’ll just say it: the very familiar styling cues make the Speake-Marin Ripples problematic to look at. To try and understand the Ripples a bit better — to give the watch a fighting chance, really — I had a brief but intense hands-on with the creation at Watches & Wonders.

The steel Ripples is the first watch in the new collection that Speake-Marin decided to call (in good Frenglish) La City. And there are more things that are forced together than just two languages. What about the shape of the 40.3 × 9mm steel case? It sure has some eye-catching stylistic trademarks. The round dial opening and the broad bezel with a vertical grain burn the word “Nautilus” into your retina. Yes, there are plenty of differences with the legendary Genta design. But it’s all about the impression a watch makes, and it does that with the sum of its details. Every detail might be slightly different — the dial, for instance, is different, but still completely the same. But as a whole, the Ripples paints a picture in your brain that makes you think of a lot of watches… just not the Ripples itself. 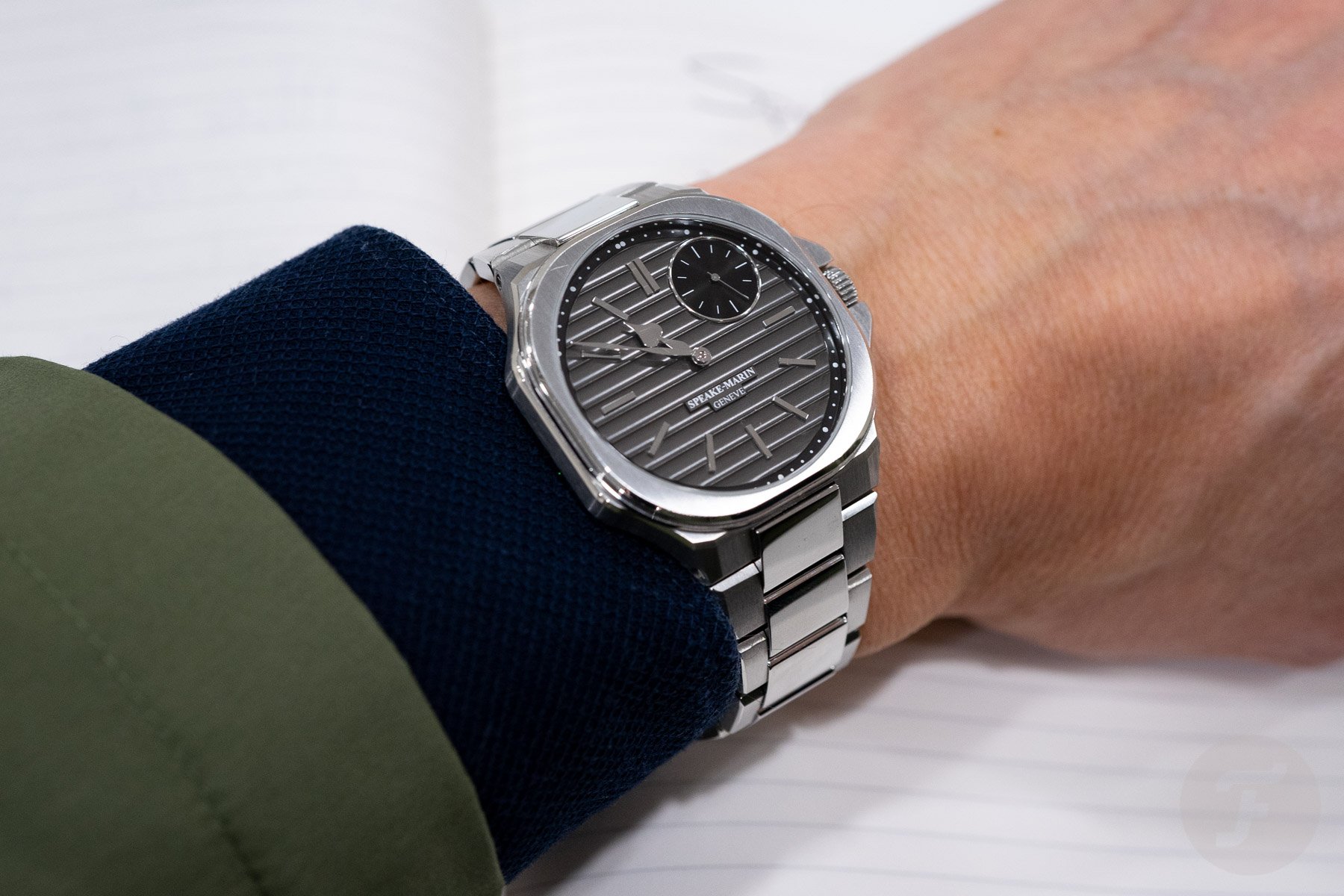 The ripple and wrinkle effect

I have to say that the Speake-Marin Ripples (ref. 604015040) does what a ripple does. The ripple effect occurs when a disturbance to a system — the world of watches, in this particular case — spreads outward and affects an increasingly larger segment of the system. The segment is the realm of very luxurious sports watches you know all too well — the “it” watches of the moment. When the Speake-Marin Ripples was “dropped”, it caused some ripples. No, not ripples; it caused wrinkles. It put a frown on my face. And when I got to see, touch, hold, and wear the watch, that skeptical frown on my face didn’t disappear. 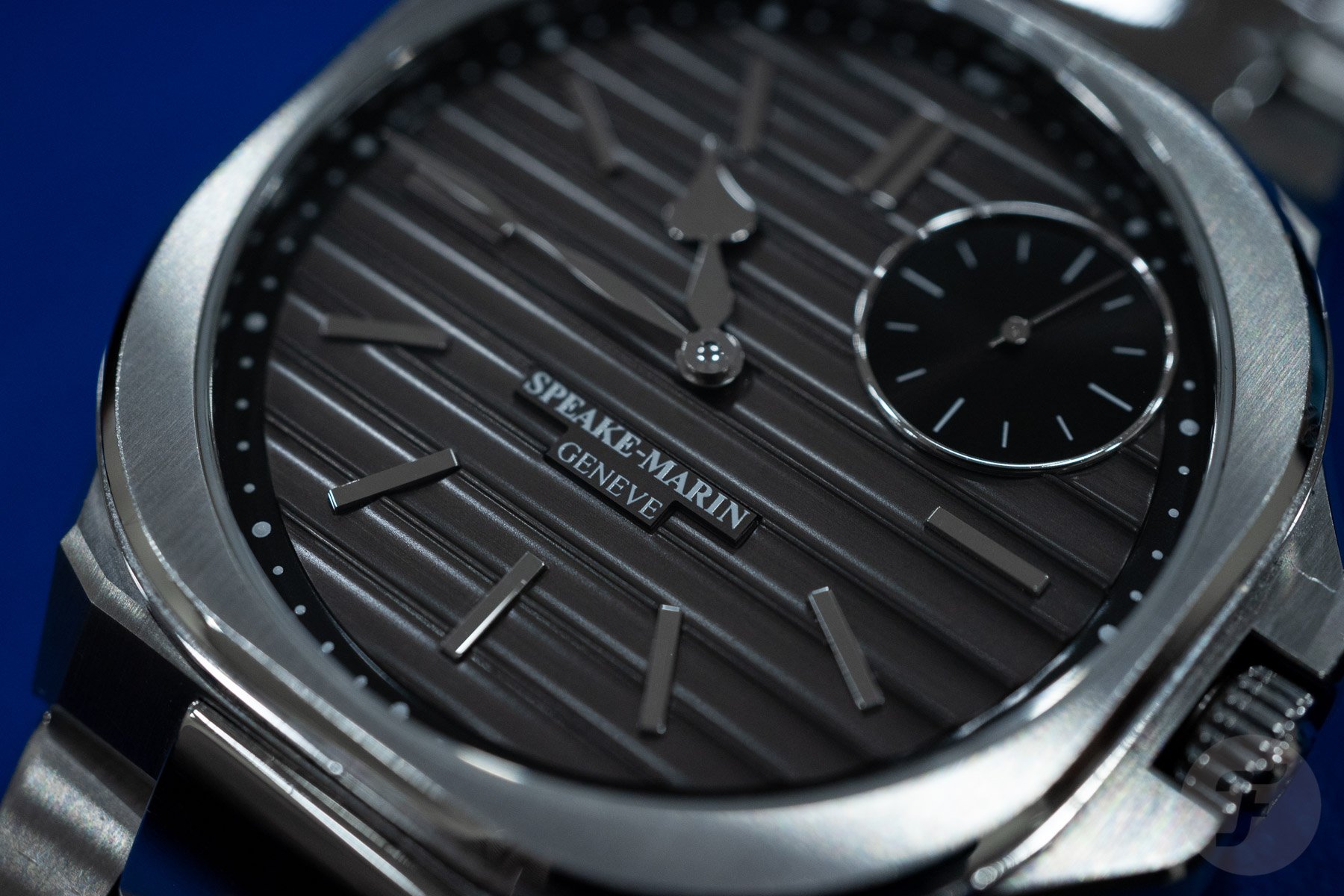 In any case, it didn’t cause a ripple effect in my “watch brain”. It came nowhere close to disturbing the powers that be. And I’m quite sure that in the head offices of the brands that corner the luxury sports watch market, they didn’t feel the building shaking either. 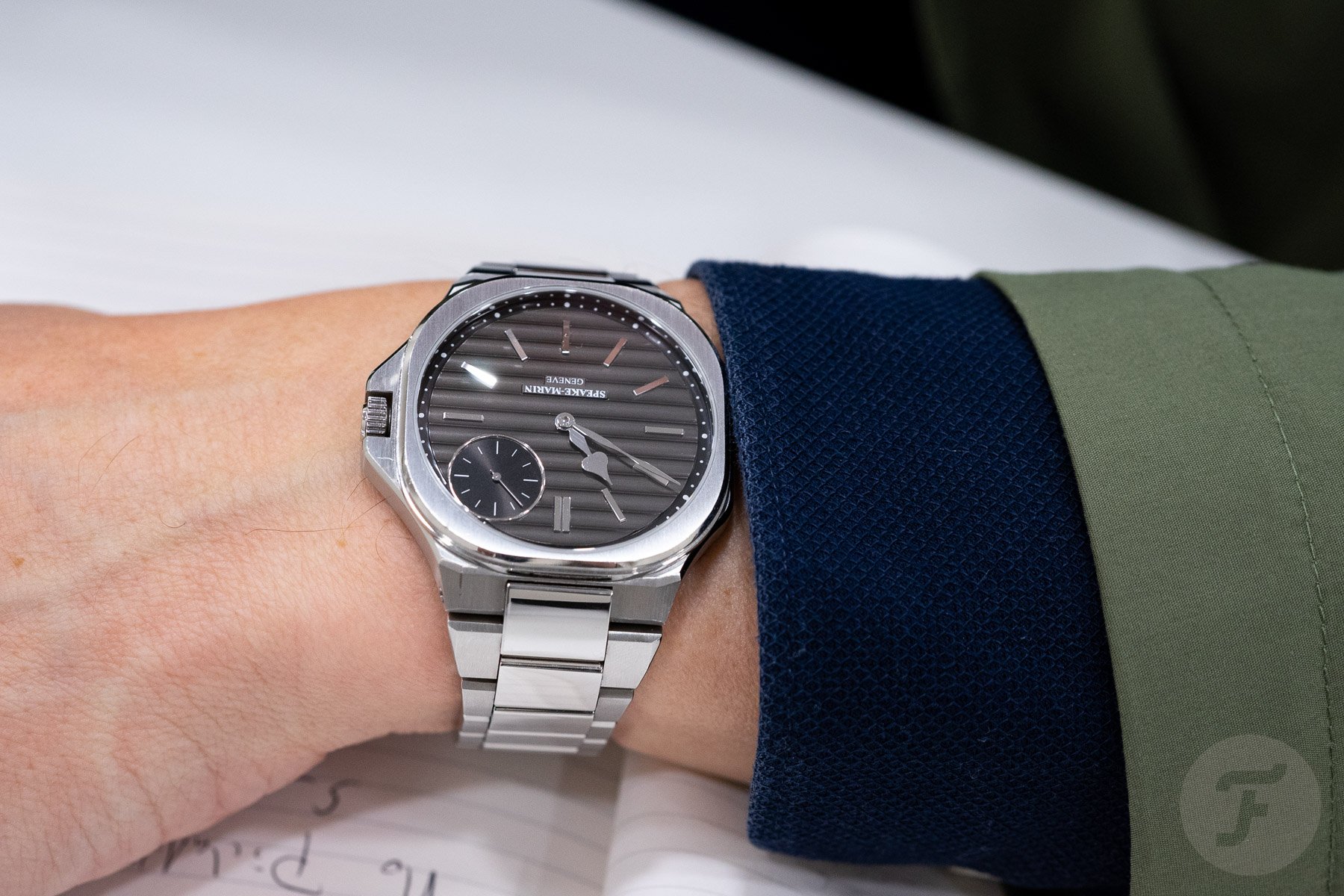 Hit by a wave at one-thirty

The very familiar look of the Speake-Marin Ripples that you see in the press pictures doesn’t magically disappear when you see the watch in the metal… The banged-up metal, that is. The watch was a pre-production piece that already looked like it had lived quite a life. If scratches are what wrinkles are to a watch journalist, this watch was at least 55 years old. But anyway, back to the appearance of the Ripples. What you see in the picture is what you get on the wrist. You get something that looks so very familiar that also somehow short-circuits the brain. Now, that’s not because of the watch’s familiarity. You kind of take that in then file it away in the mental cabinet labeled “Integrated Luxurious Sports Watches A–Z”. Instead, it’s because of that one, very odd element — the small seconds at one-thirty. The most original part of the Ripples turns out to be the element that causes the biggest waves. 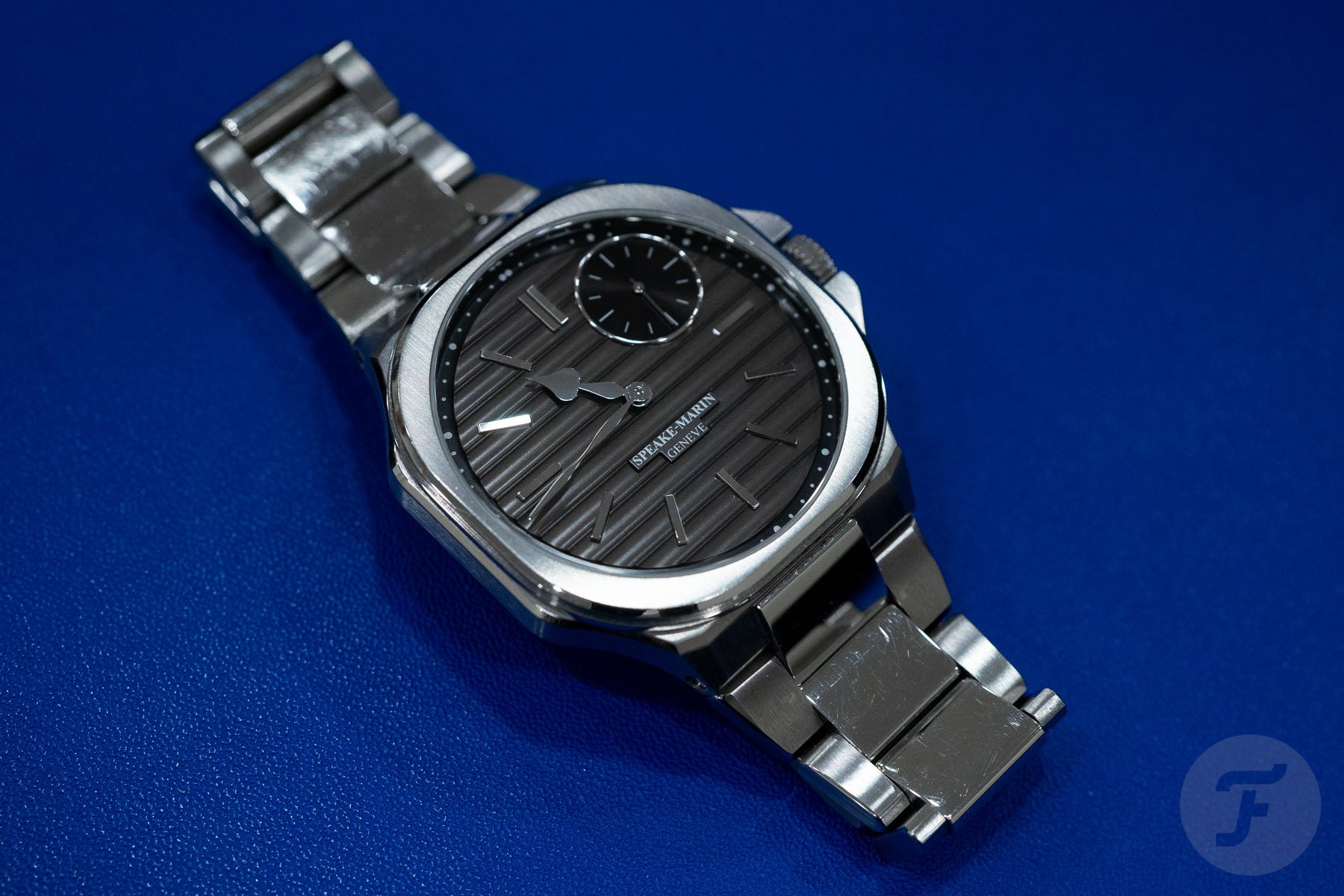 With the Ripples on the wrist, I tried to find the balance in the watch. Although the gray brushed dial with horizontal rippled finishing tries to provide some sort of stable horizon, the visual weight of the watch is at one-thirty. The sub-dial draws so much attention for its “unique” placement, but also because it shows a different and contrasting finish. And whereas the small seconds indicator is a very prominent detail, the rhodium-plated, polished, heart-shaped “Big Ben” hands more or less blend into the background of the dial. The reflection of the rippled texture overpowers the shine of the hands. 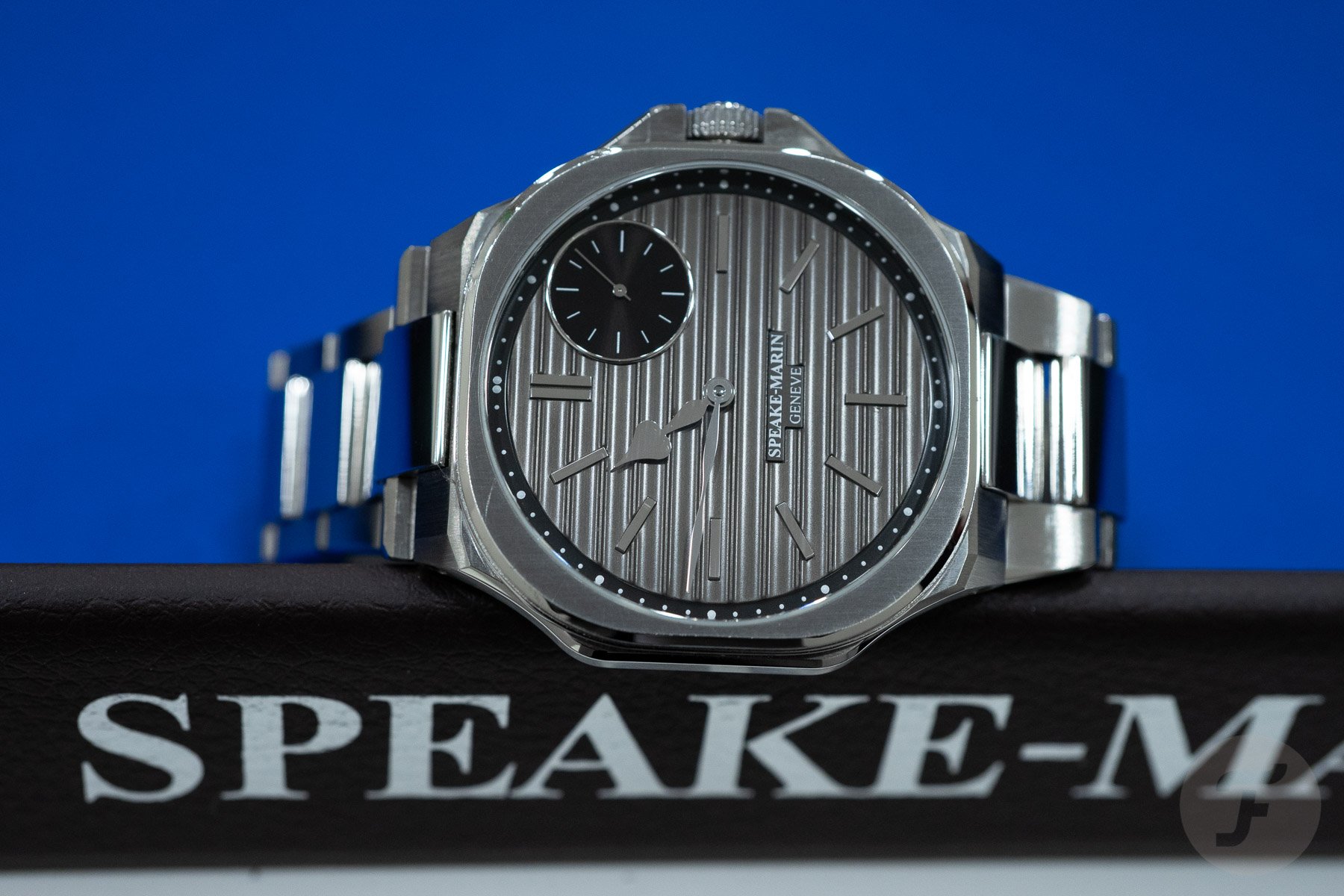 The reason for its existence

Czapek and H. Moser & Cie., newcomers to the sphere of ultra-luxurious sports watches, managed to deliver fresh, evolved, and contemporary takes on the matter. Speake-Marin did manage to insert an element of its own, but in the end, it just doesn’t captivate. Again, the Ripples that I got to touch and wear was incredibly beat-up, and that took away quite a lot of the luxurious shine. But even when I looked through all that external damage — I can because I’m a trained professional, remember — I just couldn’t get through to the point of this watch. I couldn’t discover the reason for its existence. 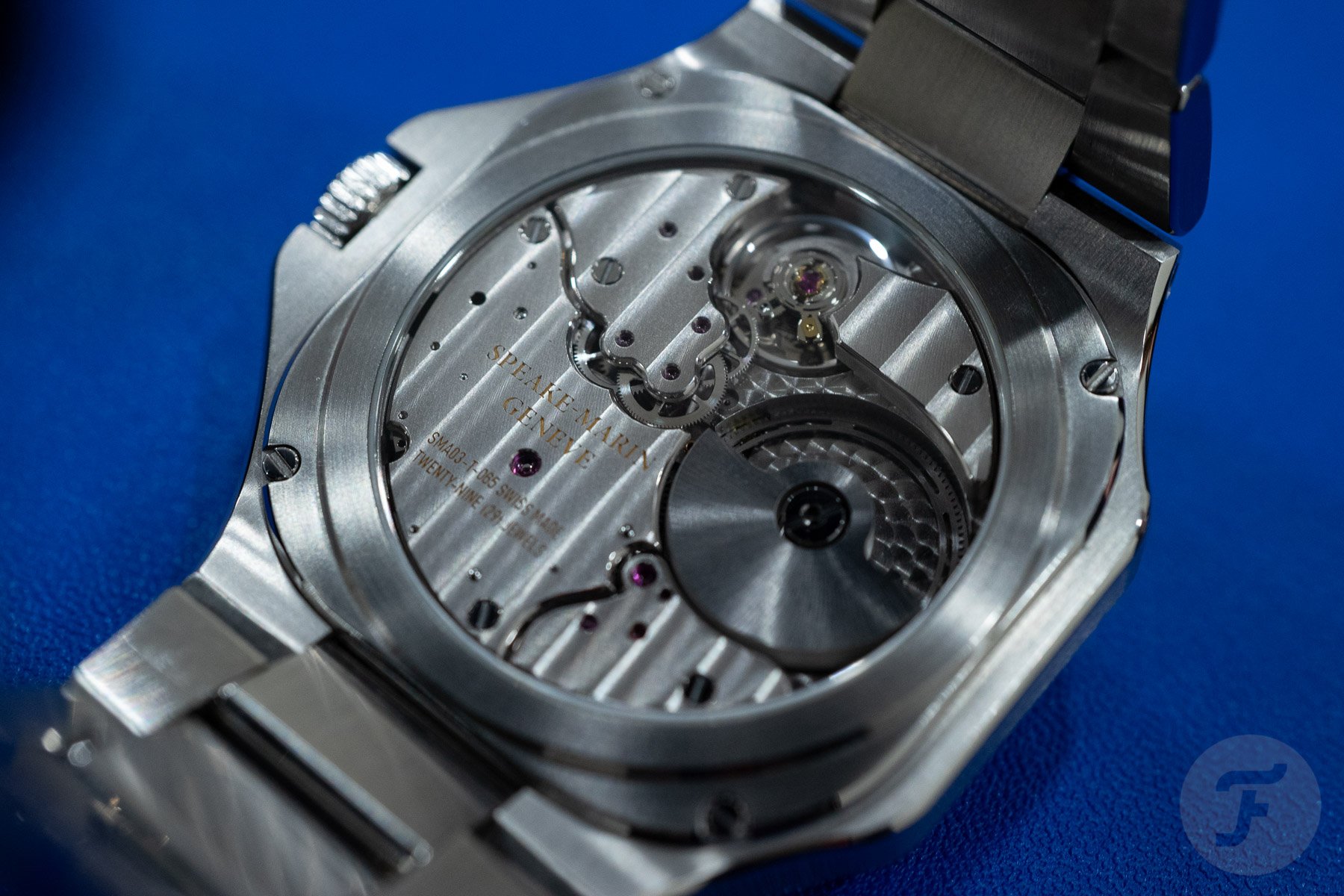 On and off the bandwagon

Of course, Speake-Marin wants to sell watches — the brand is not a non-profit, you know — so trying to get on the bandwagon makes sense. But when you do hop on, at least bring something that won’t get you thrown off the wagon immediately. And that is what will happen when you bring the Ripples, I suspect. Now, when you flip the watch over, the 52-hour power reserve caliber SMA03-T with its integrated micro-rotor is a sight for sore eyes. The problem, however, is that your eyes already hurt so badly from the case, dial, and very generic-looking bracelet, that the movement just can’t heal all the damage that’s been done.

I gave it a try. I gave it a shot. And yes, I really did my best. But in the end, I’m just not impressed and/or convinced the Ripples is the way to go for Speake-Marin. Personally, I love the Speake-Marin Piccadilly case. An evolved version of that case — and yes, you can evolve a case design, as Audemars Piguet proved with the Royal Oak Concept — would bring something more from the heart to the table… erm… bandwagon. Or maybe it could become its own bandwagon. I don’t know. But what I do know is that the Ripples will have an annual production of 100 pieces and a price of around CHF 24,900. Because of its appearance and price, it will forever remain in the wake of greatness and probably drown there, I’m sad to say. The Ripples won’t fulfill your hunger for luxurious sports watches. It will leave you starving. 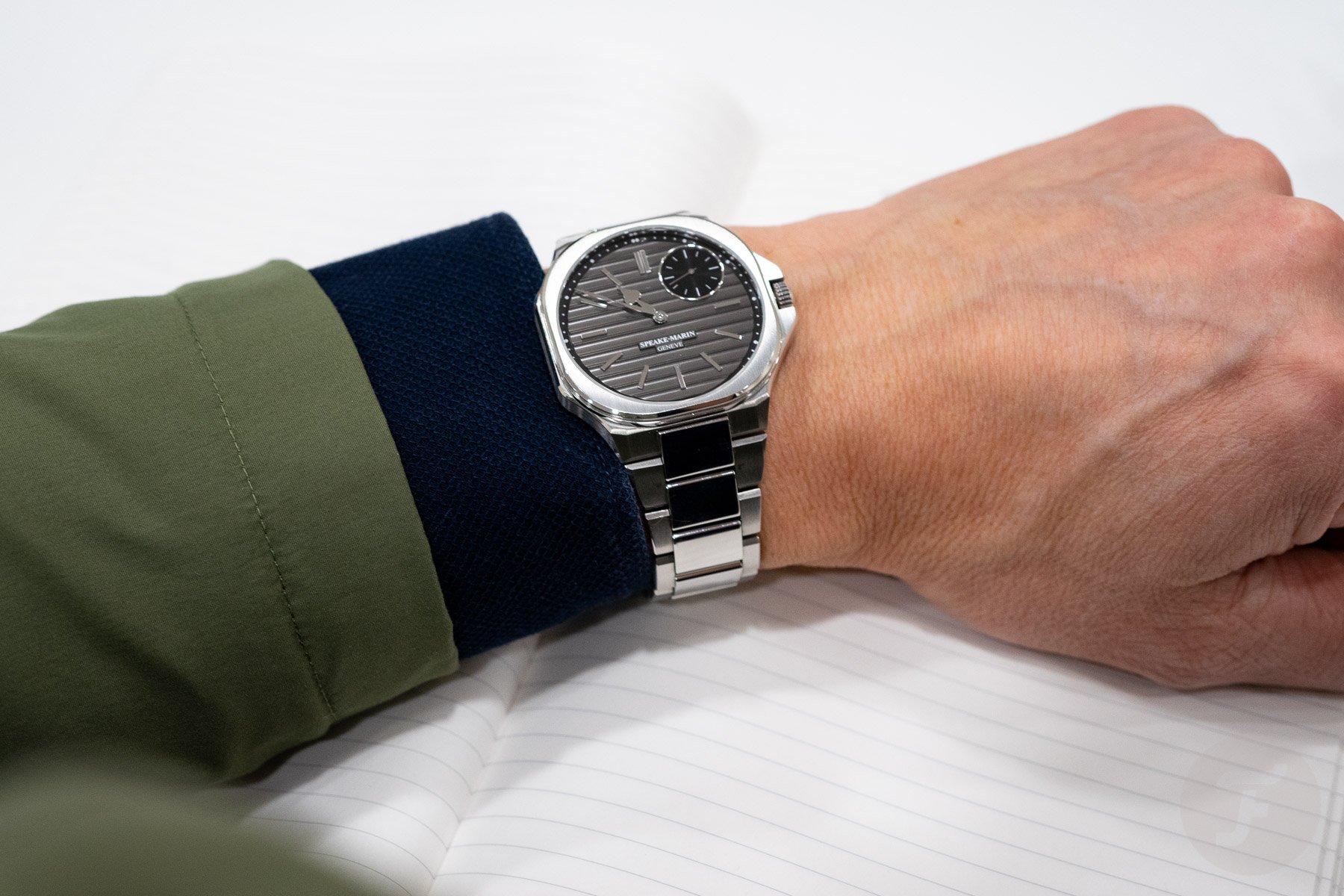 I’ll wrap this up now, and I won’t complain about the fact that the sports watch is just 50 meters water-resistant. I won’t. I’ve written enough. More than enough. You should just see the ripples… erm… wrinkles on my forehead.

If you need more information on the Speake-Marin Ripples, please head over to the brand’s official website.