Speedy Tuesday – Omega Speedmaster 105.003 Back From The Watch Spa

It’s Speedy Tuesday! This week we have this wonderful Omega Speedmaster 105.003 from Georg from Germany and it just returned from the watch spa. He bought all of his watches between 1984 and 1987, merely because he liked the look of them. As this was definitely a period where mechanical watches were out-of-fashion, he was able to pick them up for unbelievable prices. At least for today’s standards. When mechanical watches tended to became a bit more main stream, when the first watch magazines popped up as well, he stopped buying them. It wasn’t until recently that he started checking details on his purchases from 20 years ago. 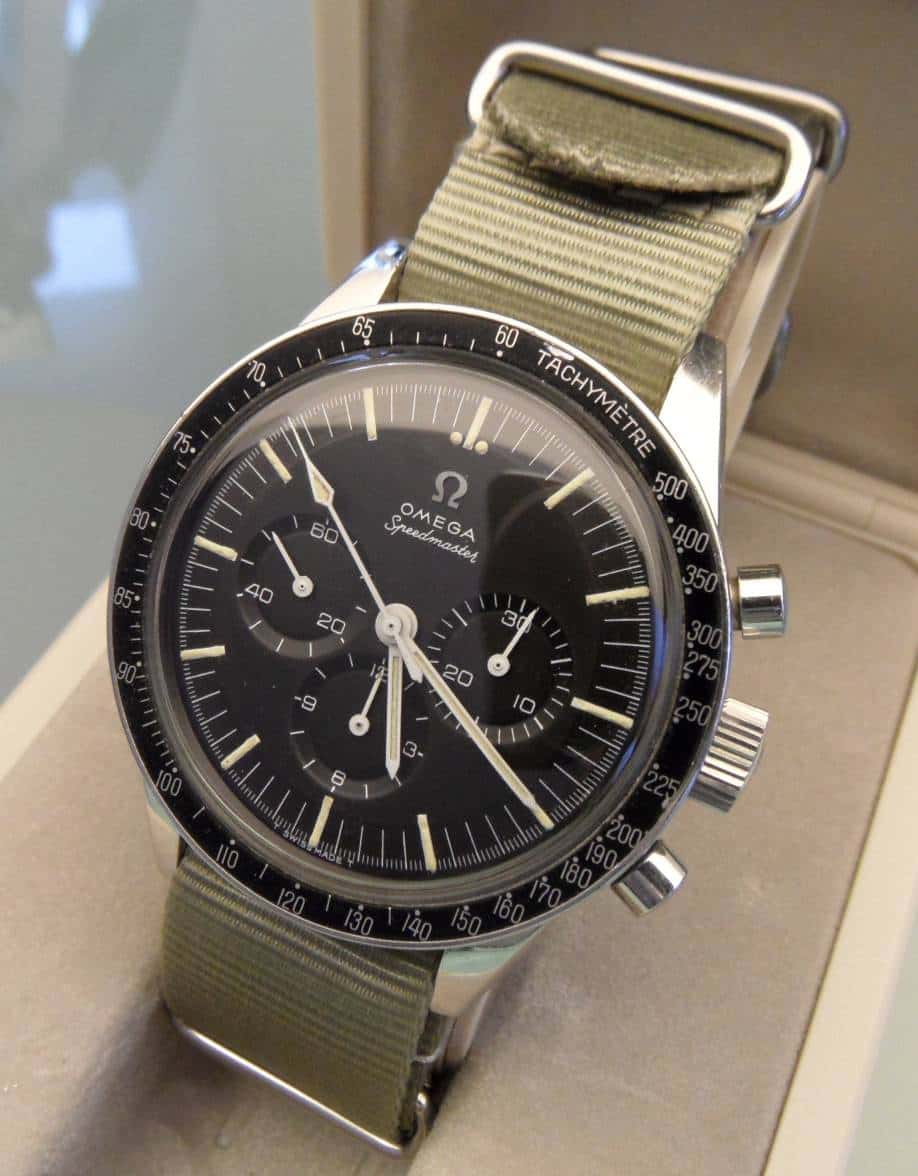 One his 1980s purchases is this beautiful Omega Speedmaster pre-Professional 105.003 with its symmetrical case, applied Omega logo and the much sought-after Lemania based calibre 321 movement.

Georg had it overhauled, cleaned and some movement parts have been replaced to get it back into perfect condition. As you can see, it has the original bezel with the dot over the 90 (see here for details on the different Speedmaster bezels). Also, the original dial appears to be in great condition with a slight discolouration of the indexes.

This Speedmaster was the last model to feature a symmetrical case. Not long after, Omega introduced the a-symmetrical case with the pusher and crown guards (reference 105.012 and 145.012). The 105.003 came after the 105.002, which was actually just a CK2998 but using the new reference number methodology. 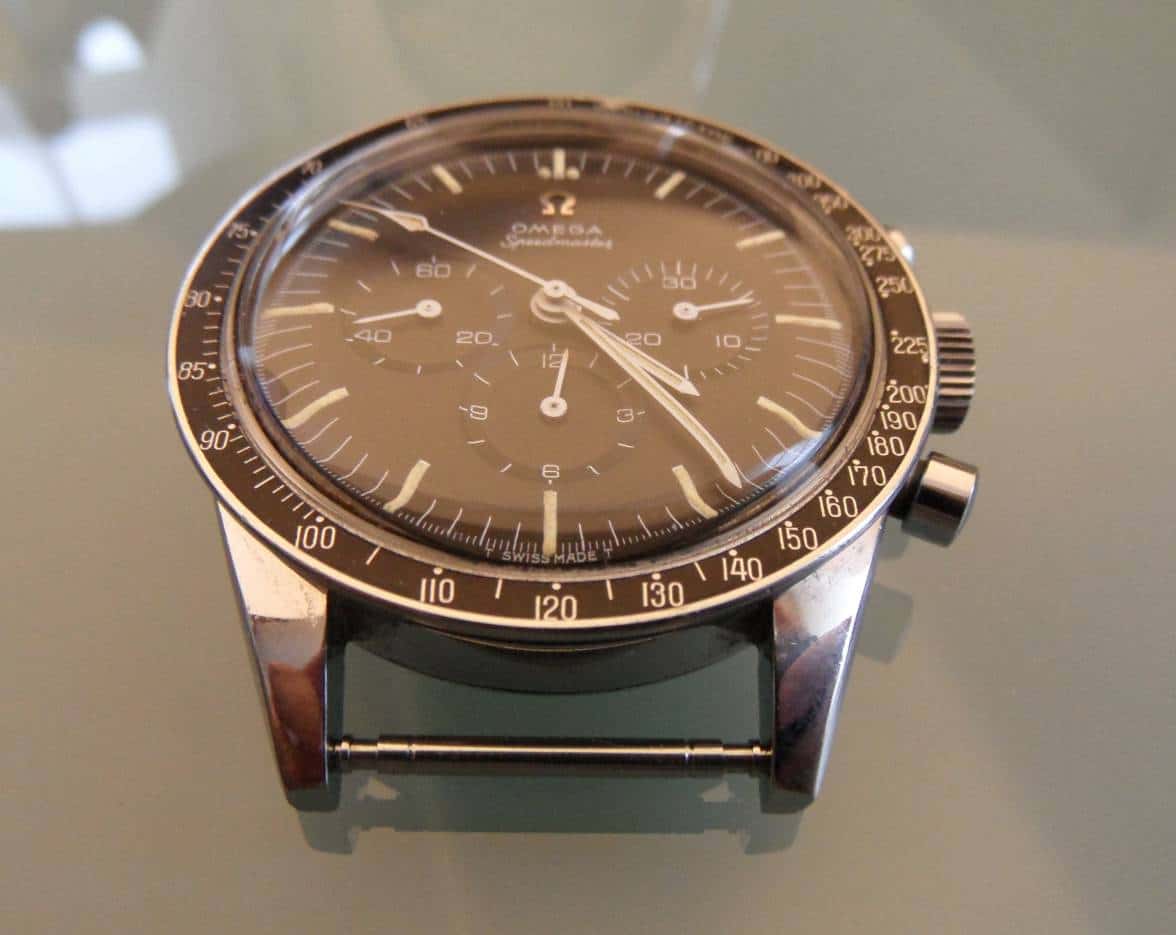 Although the hands might look a bit white-ish to match the dial (a guideline to correct Speedy dials can be found here), the tritium does match. According to the owner, the hands have never been replaced during his ownership. The chronograph second hand has the triangle short-end, like it should on this particular reference.

This 105.003 reference Speedmaster is probably an interesting investment for collectors as well. The last reference without the crown guards (which Omega started using as per request of NASA’s James R. Ragan as he told me during an interview). There are cases known where the 105.003 also has the ‘Professional’ wording on it, even before NASA chose the Speedmaster to be their watch of choice. It is not exactly clear why Omega did this and whether this inspired them to use the ‘Professional’ wording later on when it became the official watch for extravehicular activities (EVA) for NASA’s astronauts.

As written above, the 105.003 replaced the CK2998/105.002 and is actually the symmetrical Speedmaster that is still reasonably affordable at this point. The CK2998 have price tags somewhere around $10K USD – depending on its condition – where the 105.003 can be bought for around half of that money. Also depending on it condition of course. If you are looking for a pre-Moon or pre-Professional even, this might be a wise choice.

Georg is happy with this 105.003 and it is in great condition. That might have something to do with the fact that he actually stored it for 30 years before getting it out recently. 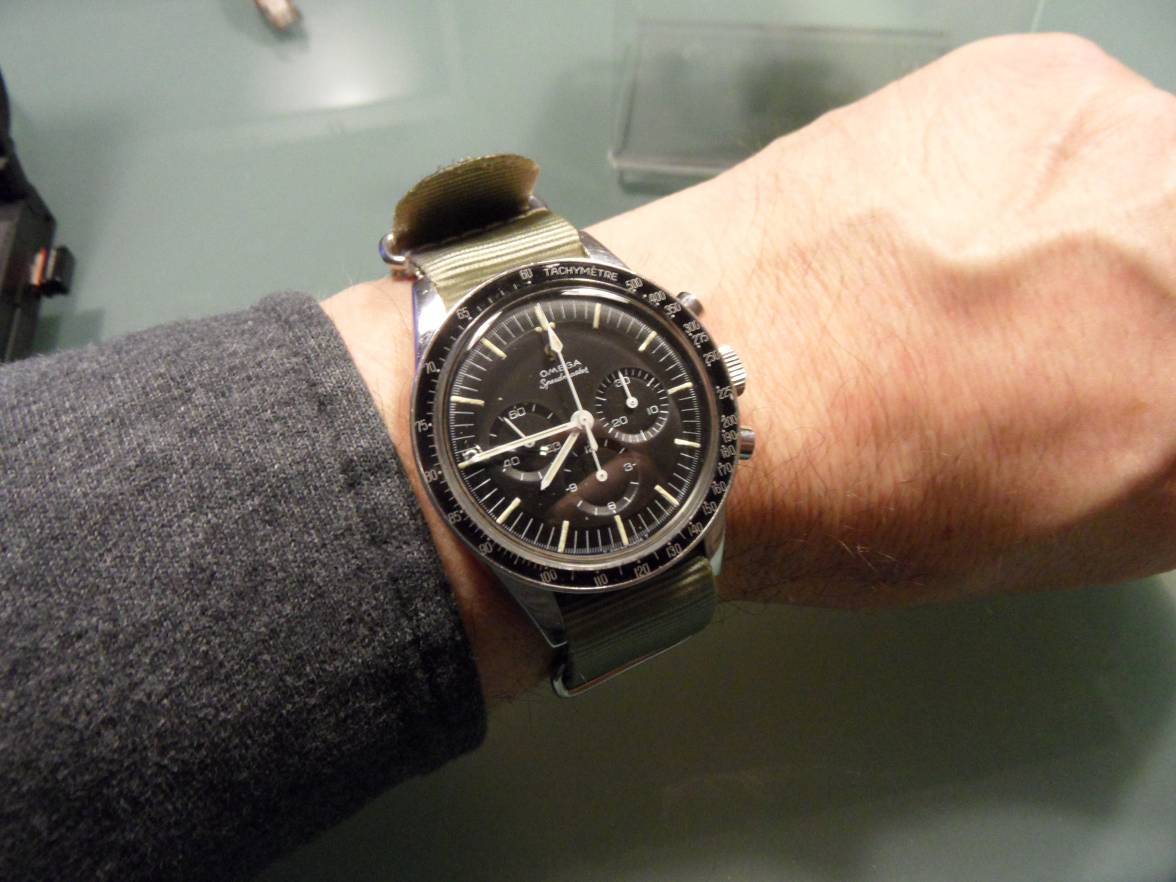 We get a lot of requests on where to get these vintage pieces. Soon, we will do a write-up on a Speedmaster buying-guide, trying to answer all of those questions. A good way to start is going to watch trade shows, check watchrecon.com and chrono24 often and keep an eye at the stock of vintage watch dealers. However, I have to admit that some of our best pieces were bought from private sellers (via eBay or otherwise). Make sure you educate yourself on the topic though. A good way is coming to Speedy Tuesday every week or check our archive, chronomaddox.com or visit omegaforums.net.

If you have a Speedmaster you want to show here on Speedy Tuesday, send an e-mail to info @ fratellowatches.com (remove the spaces in this address, it is done to prevent spammers from flooding our email box).

Hot Topics
Introducing: The New Seamaster Professional 300M 60 Years Of Bond — With A Special Animated Case Back
105 comments
Are You Still After An Omega × Swatch MoonSwatch?
97 comments
It’s Time To Invest In A Dress Watch — Our Picks From Breguet, Omega, Grand Seiko, And More
73 comments
Introducing: The Oris Divers Sixty-Five Fratello Limited Edition
68 comments
The Rolex Waitlist Conundrum — How Much Will The Price Of Your Watch Increase While You Wait?
50 comments
Popular
(From The Archives) Shut Up & Read The Truth About Cartier Watches
George Cramer
21
10 Tips For Better Watch Photography
Bert Buijsrogge
11
Hands-On With The Seiko Prospex Dawn Grey Series
Robert-Jan Broer
12