This is part II of our Speedmaster Professional 145.022 Buyer’s Guide (part 1 can be found here), with a number of updates since the previous publications (2015 and 2017).

This second part of the 145.022 Buyer’s Guide goes into the details of the Speedmaster Professional 145.022, details you should pay attention to when you are in the market for this reference. We are receiving a healthy amount of e-mails and messages to help some of our readers with their quest for a Speedmaster Professional 145.022. There are quite some of these watches out there that have been tampered with or have been serviced with authentic parts but from a later era. That also affects the value of the watch.

As always, the devil is in the details and it’s these details that can make your purchase to an awesome find or a huge drama. Since our initial version of this article (2015), the price went up a fair bit but we still believe that it is acceptable for this iconic piece. We updated this article with today’s prices.

The relatively low price is one of the reasons why it is so popular at the moment. As I wrote in part one, you can pick up a very nice 145.022 from the 1980s below 4000 Euro on eBay. However, an early 1970s piece starts at a bit more (around 4500 Euro and goes up rapidly depending on its condition). Another reason for its popularity is that the Speedmaster 145.022 is an amazing looking watch, not much different from the current Moonwatch with its shuttle cam hand-wound Lemania chronograph movement but yet have this vintage look & feel because of the old print on the dials, bit of patina on the hour markers and hands, stepped dials and of course the marks and scuffs it received overtime while being worn. Perhaps that makes the Omega Speedmaster Professional 145.022 the best of both worlds.

Because the Speedmaster 145.022 was produced over a longer period, you will soon find out that there are subtle differences to discover in this reference. Luckily, the supply of these watches is still substantial and it is much easier to find an all authentic and time-correct piece than, let’s say the predecessors 145.012 and 105.012. 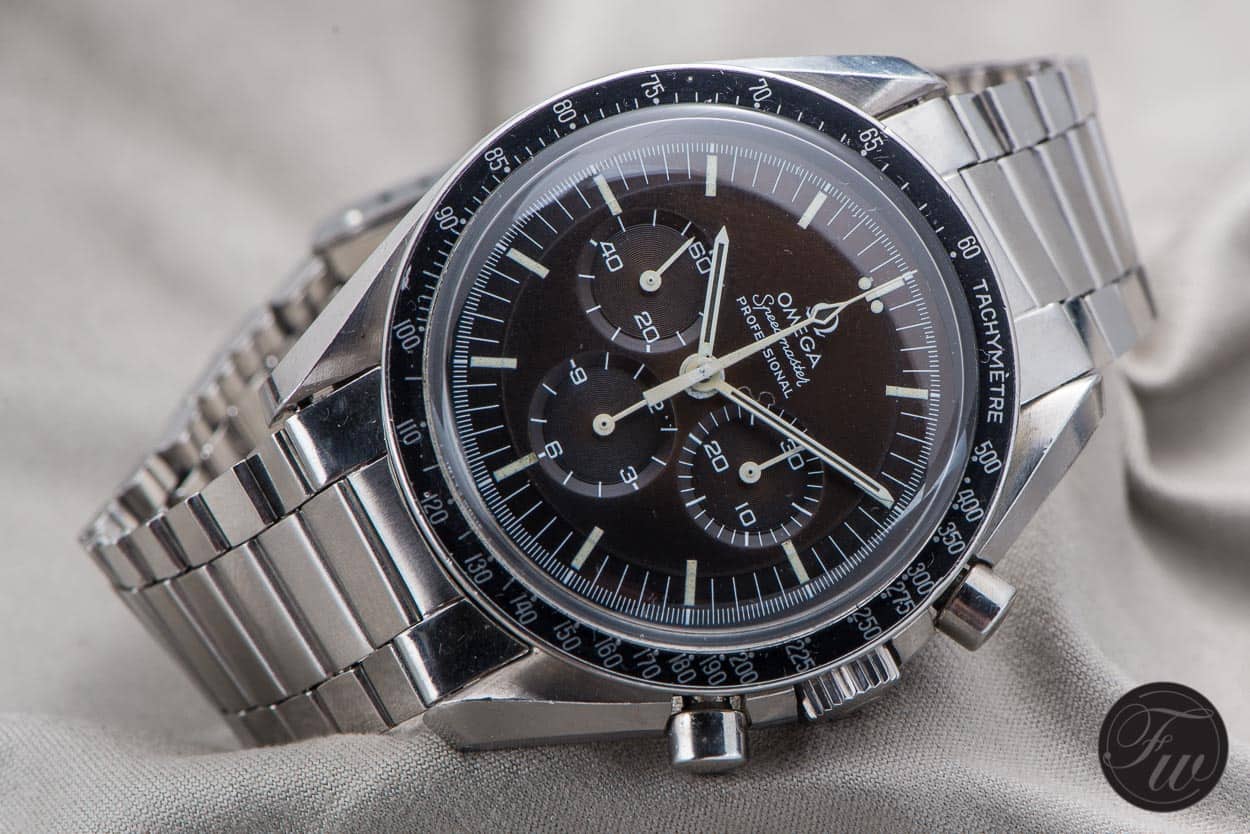 As previously discussed in part 1, the following ‘production runs’ can be identified:

In short, I could split them up in Pre-Moon and Post-Moon Speedmasters, referring to the Moon landing in July 1969. But to be honest that doesn’t cover the load, as many small changes were made during the production of the 145.022 references. For your information: this 145.022 ‘Moonwatch’ never was on the Moon actually, as Omega only supplied 105.012 and 145.012 references to NASA after the certification took place. The 145.022 was NEAR the Moon though, during Apollo 17. Only in 1978 Omega sent a batch of 56 Speedmaster Professional 145.022 watches after re-certification for the Space Shuttle program.

One of the first things you want to do with you found a Speedmaster Professional for sale, is have a look at the movement and identify the serial (or movement) number. The movement number is something I touched already in Part 1 of this Omega Speedmaster Pro 145.022 Buyer’s Guide. The movement number (not to be confused with the caliber number) can give you an estimate on the production year. In the past, we published an overview of these numbers and production years here, but we found out that those were often too far off. The most famous one you will come across on the internet is the one from Roman Hartmann on Chuck Maddox’s website. That was an awesome attempt in those years, but today, we know that it also had many inconsistencies. We would advise you to request an Extract of the Archives from Omega, but we can also imagine you sometimes need a quick look-up before you do the purchase. In that case, we’ve found this database to be most correct for Speedmasters. 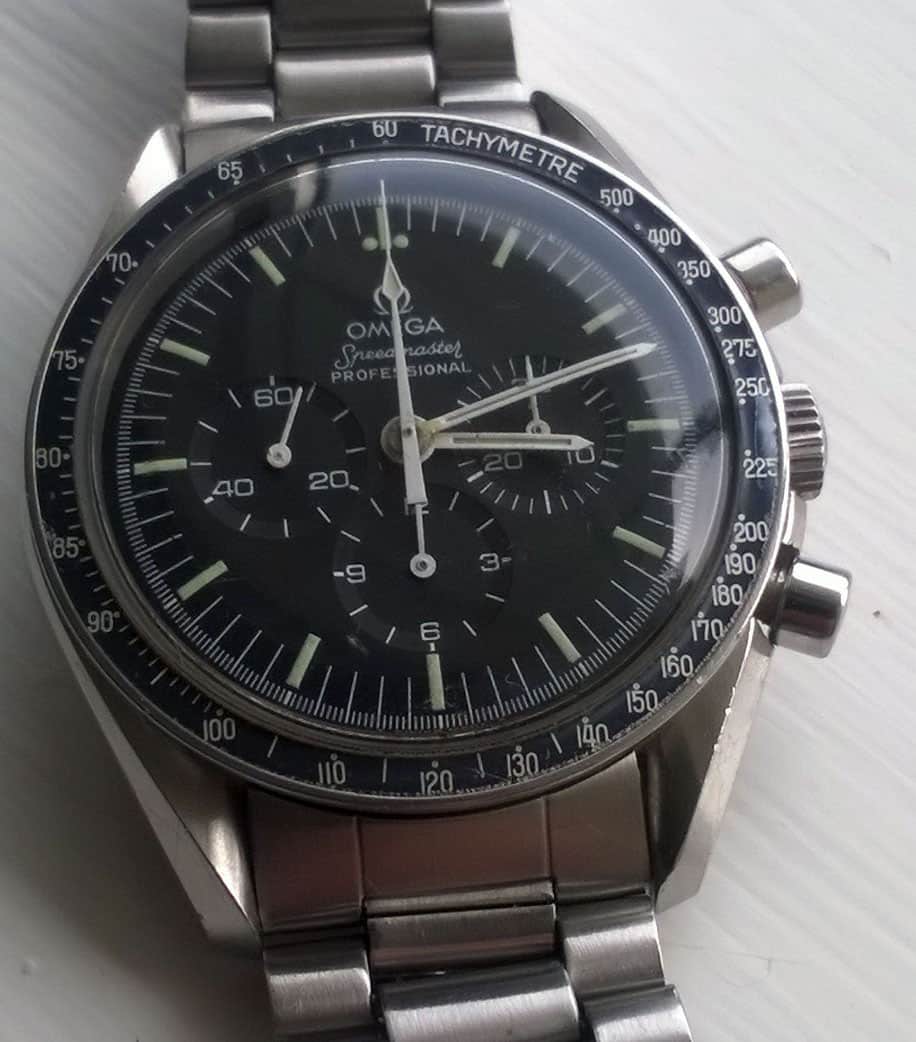 You really need to compare dials when it comes to typography and printing, otherwise it can be hard to detect small differences. In all cases, these dials have tritium hour markers and hands. Some of them will have an amazing nice yellow-ish patina, others stay quite white. I’ve seen all-white dials on the 145.012-67 quite a bit for example, while some of the 105.003 models look like they have a bit of green-ish fungus on there. So there is also a bit of ‘personal preference’ in picking the right dial. I am personally not too fond of heavily discolored markers, but a little yellow is nice. 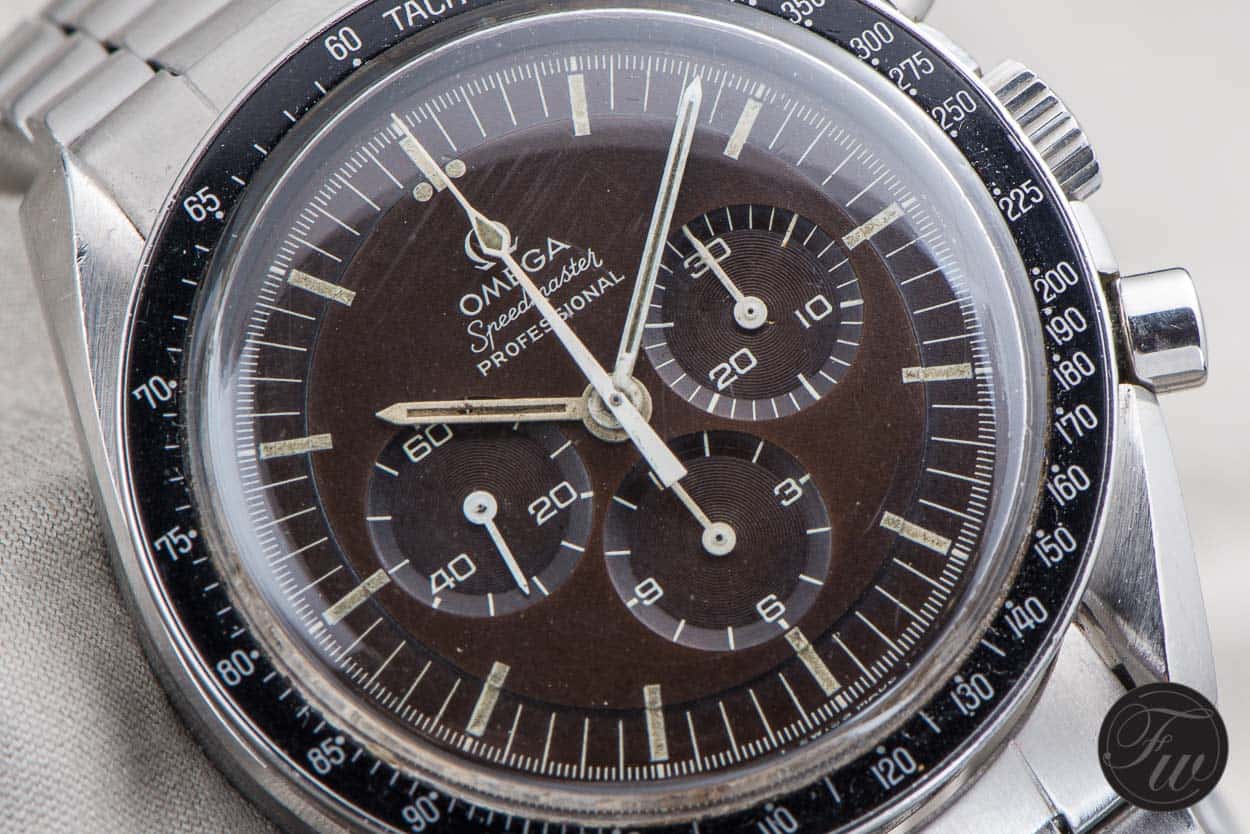 A little side note on the brown dials. These brown 145.022-69 dialed Speedmasters are heavily in demand and seem to fetch higher prices than ‘ordinary’ black 145.022 dials. It is basically a matter of preference, but please be aware that the brownish color was a result of using defective varnish. Climate conditions were of influence on the discoloration or ‘quick aging’ on these brown dials. If you find one, always make sure that the movement didn’t suffer from moisture / humidity as that caused the brown color in some cases. 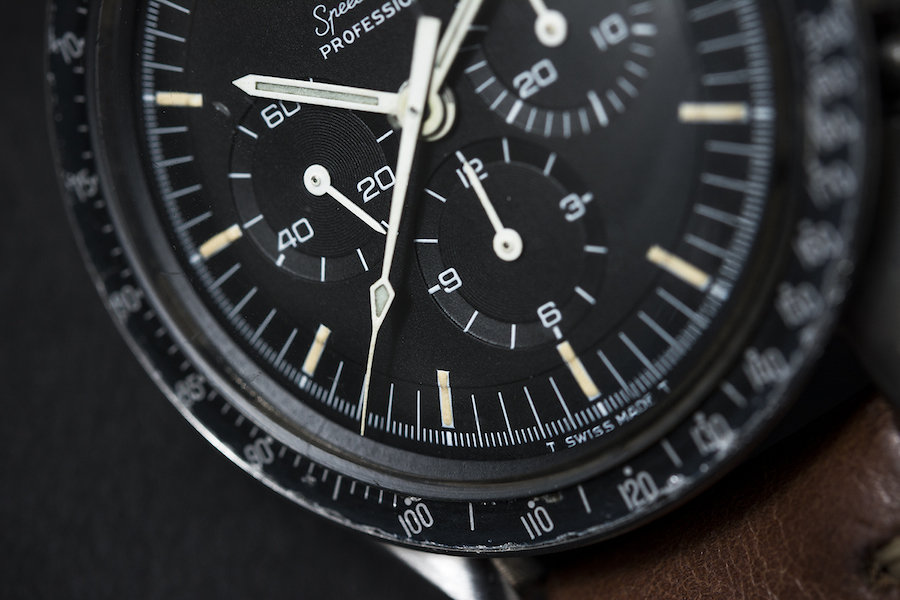 The abbreviation DON has become one of the Speedmaster buzz words in just a few year’s time. In a time where nobody could care less but just wanted to have a decent looking bezel, a lot of these DON bezels have been replaced. I plead guilty as well. DON stands for Dot Over Ninety of course and indicates a certain time frame of the production and use of these bezels. For the 145.022 references, the DON bezels are only used for the 145.022-68 Transitional and the 145.022-69 (but not all of them). Later on, starting 145.022-71, the dot was located next to the ninety (in the right upper corner). You can also identify them by the dot near the 70, where the DON bezels have the dot located at the right lower side of the 70 and the later 145.022 references were positioned next to the 70 (in the middle). However, not every 145.022-69 was delivered with a DON bezel, there are also 145.022-69 references that had the non-DON bezel (if that makes sense). So don’t stare blind at the bezel when it concerns a 145.022-69. The DON bezels also had a É instead of an E in TACHYMÉTRE. However, keep in mind, that if your reference/serial number should have a DON bezel and it hasn’t, these parts have become crazily expensive (>2000 Euro). 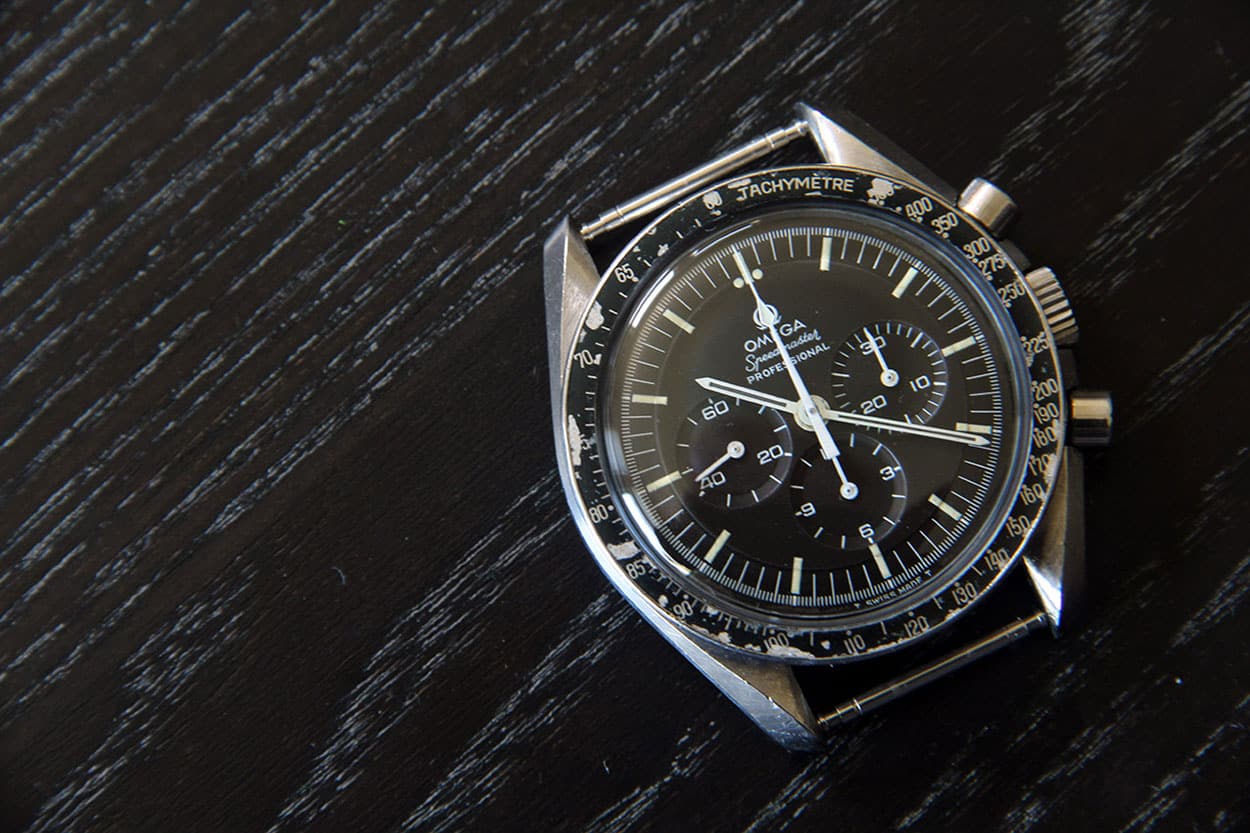 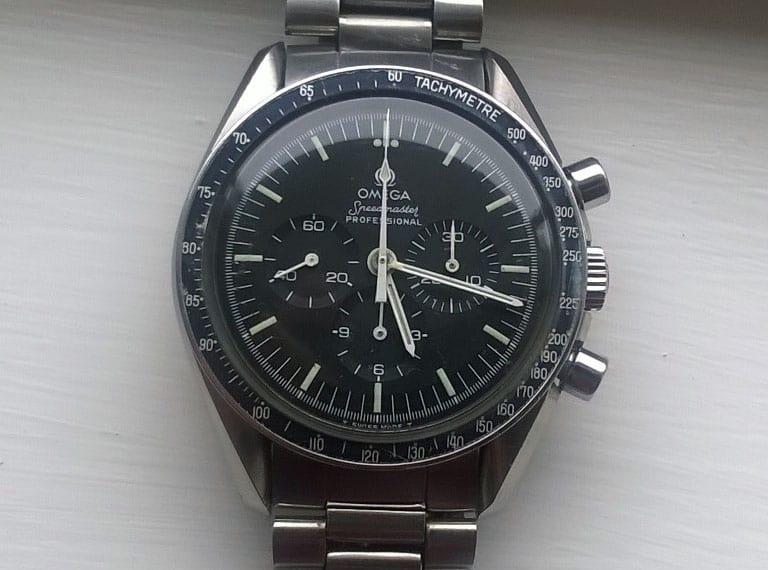 I already touched the subject of casebacks a bit in part one of this installment. There are basically four different casebacks used for the 145.022 reference Speedmaster Professional.

Let me start by saying that the straight writing casebacks are the most rare ones, especially the one with ‘Apollo XI 1969’ engraved in it as well. It is more or less the same as the gold BA145.022 Speedmaster Professional Apollo XI (the one with the burgundy bezel, remember?) caseback, with the Apollo XI 1969 engraving.

The straight writing casebacks are the most sought-after ones, but please note that a number of these different case backs were used in the same period or at least with overlap. The plain caseback with only a seahorse and ‘Speedmaster’ written is considered to be the ‘Pre-Moon’ caseback, although these were used until 1971 for the 145.022-69 until Omega started using 145.022-71 somewhere during that year. 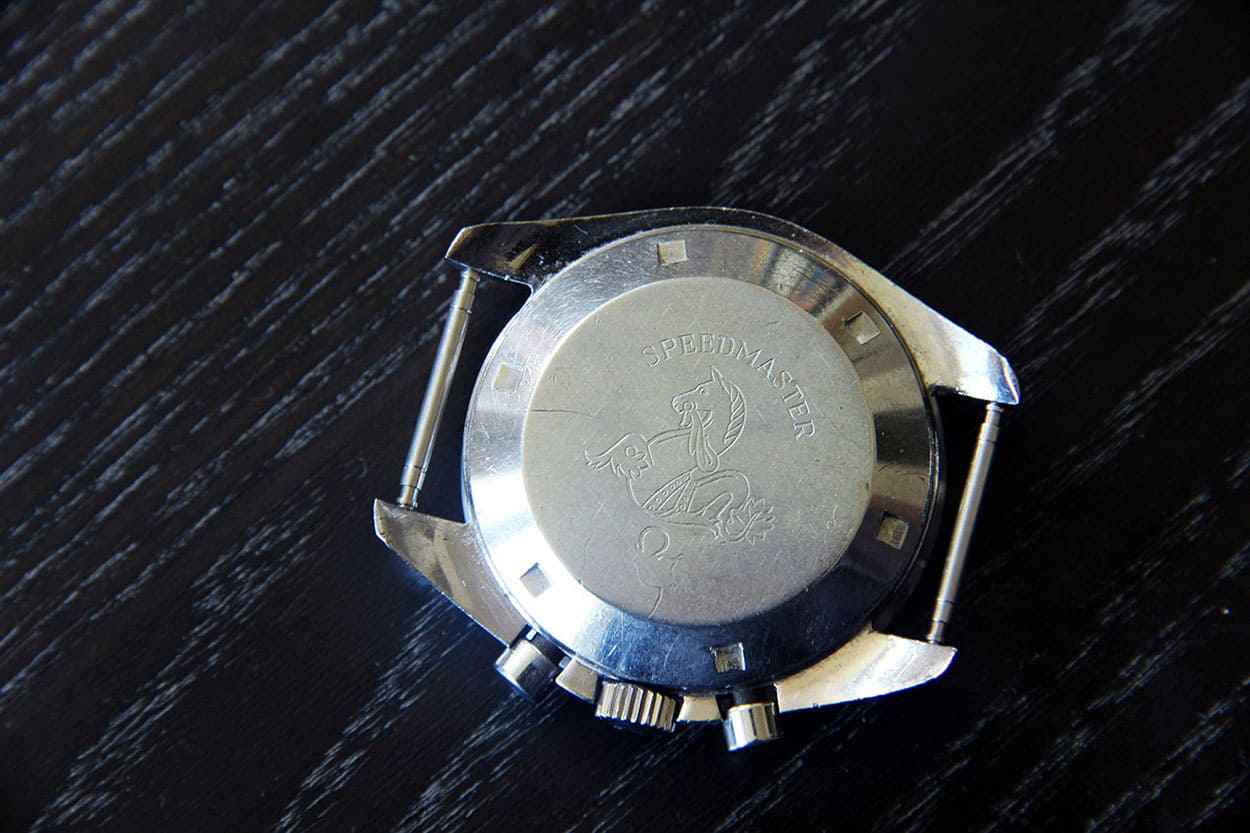 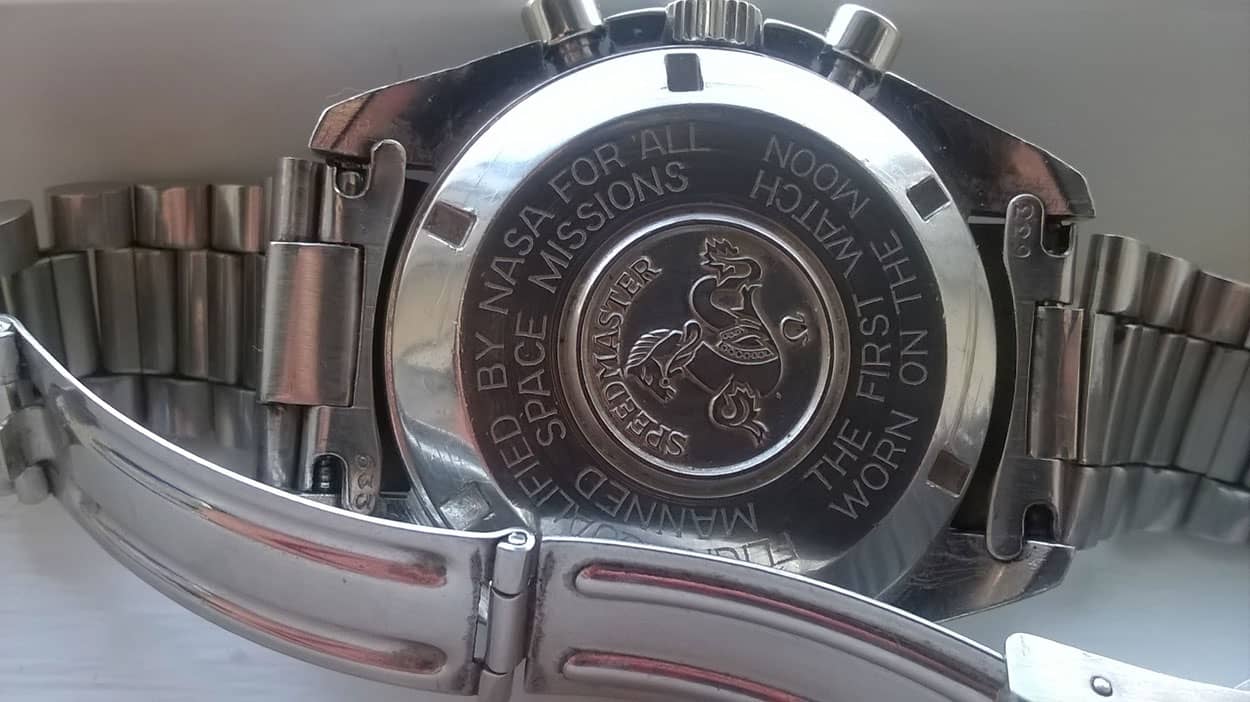 Always check the case back for certain deep scratches (most of the time you’ll find them near the little rectangular incisions for the removal tool) and make sure – if you don’t open it – that there are no pieces of seal coming out. Be very afraid about the condition of the movement when that happens. 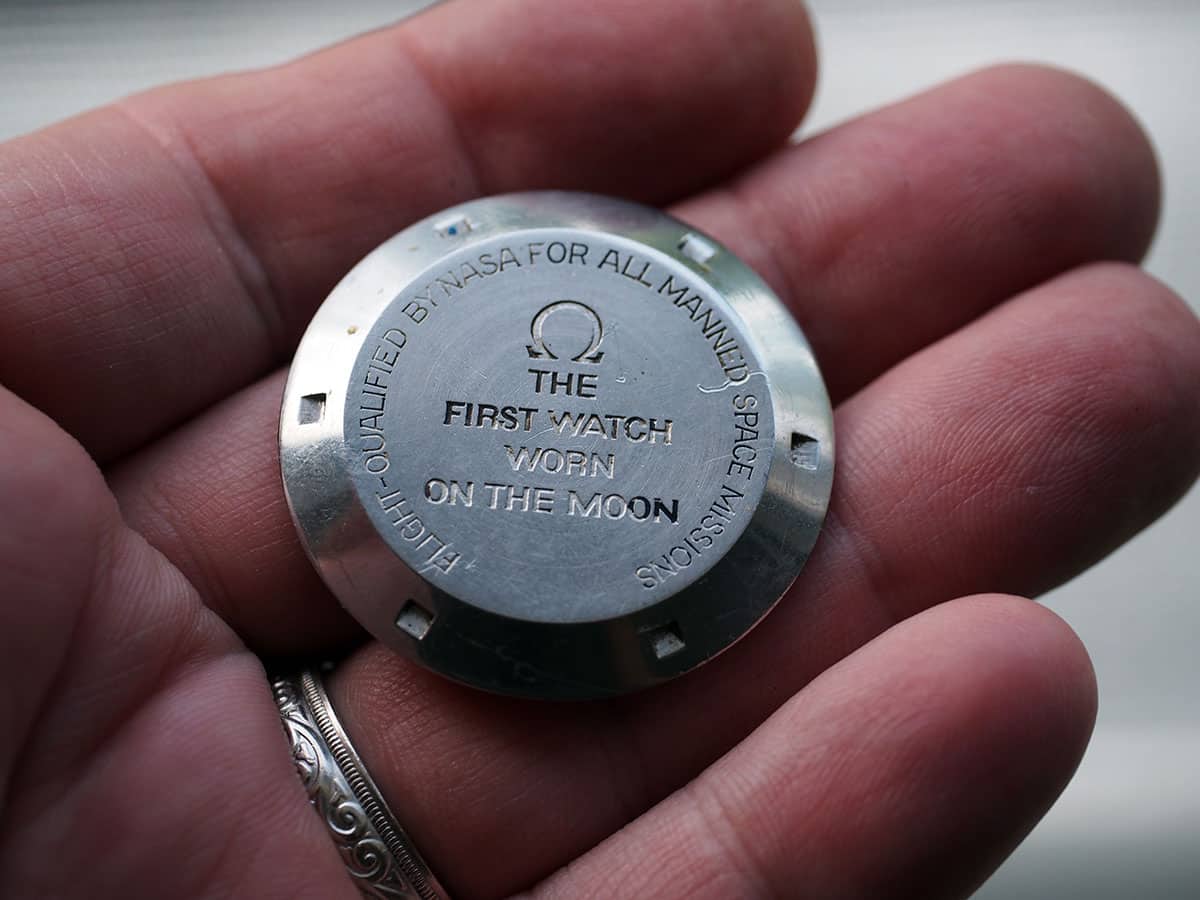 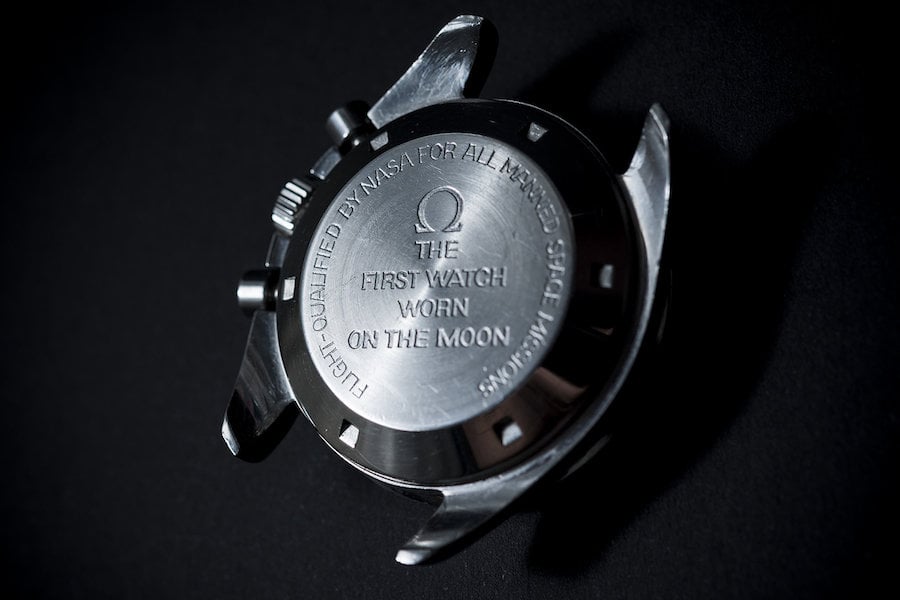 Straight writing caseback of the 145.022. Photo by Christopher of Bexsonn

Speedmaster bracelets, you could write a separate book on those. However, let’s keep it short and simple and make no rocket science out of it (as it wasn’t for Omega at the time as well). A number of different bracelets have been used for the Speedmaster Professional 145.022. From reference 1039 with flexible links for the first years (up to 1971) to the most famous ‘145.022’ bracelet, the reference 1171. You will also come across bracelets with reference numbers 1116 (very similar to the 1990s reference 1479) and 1175 (similar to the 1171). Then, there is the Holzer bracelet (I happen to own one myself as well). This bracelet looks a tad bit different and was produced in Mexico with a local supplier (Holzer). 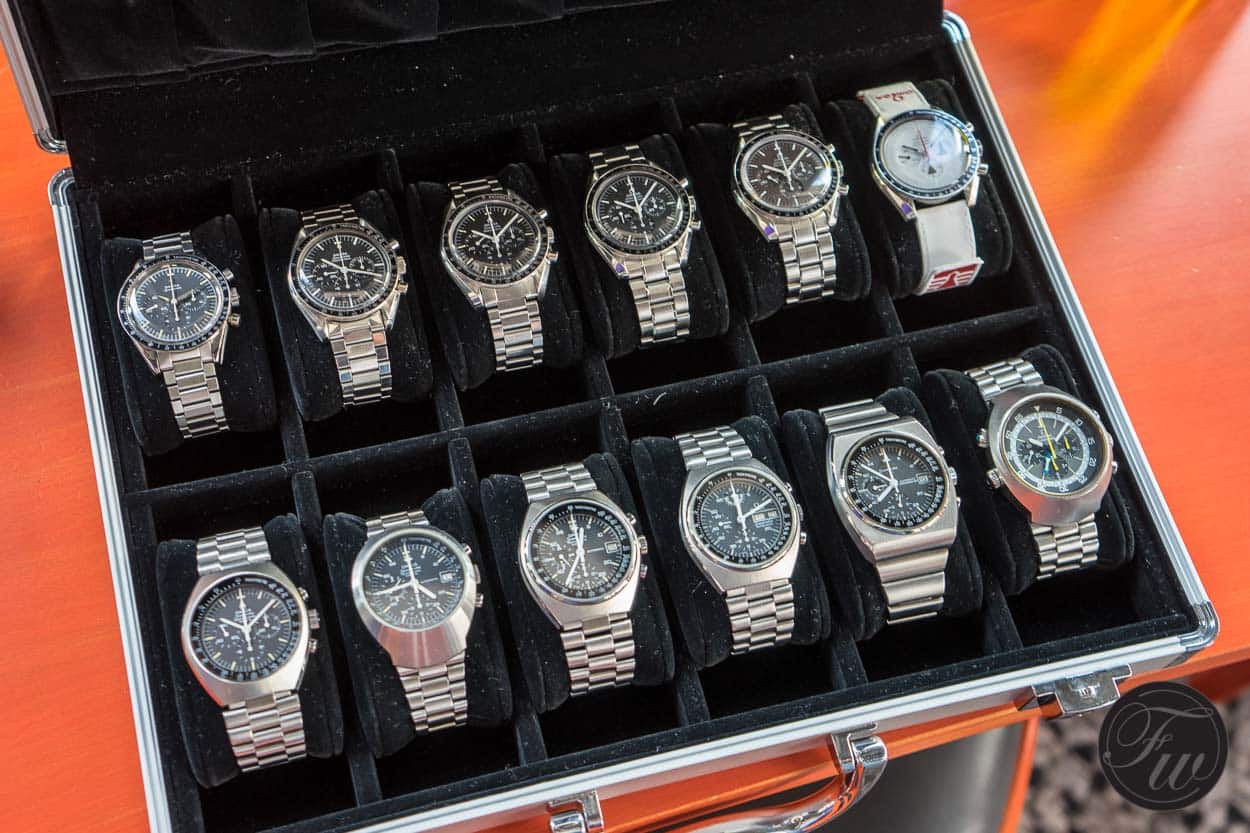 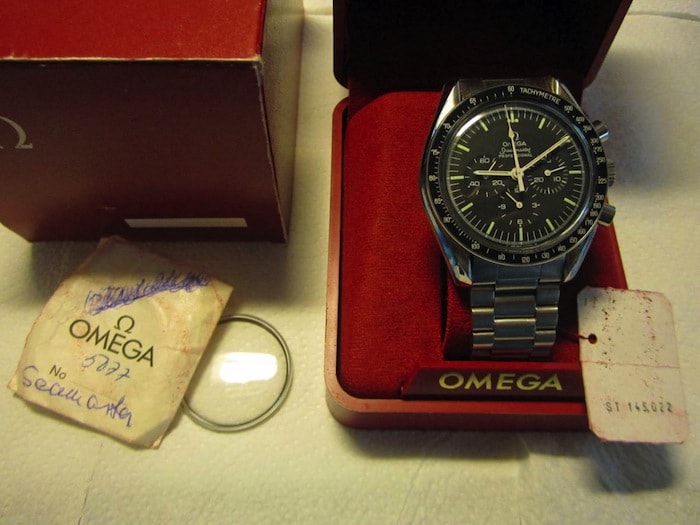 Sure, I think one of the best tips one can give is to seek help when purchasing a Speedmaster from the guys from OmegaForums.net for example. There is a huge Speedmaster community out there who are eager to help you out to identify a correct (or incorrect) Speedmaster Professional 145.022. If you are able to spend a bit, I suggest you buy the 3rd edition of the Moonwatch Only book from Rossier and Marquie that was introduced in November 2019. If you travel a lot and want something ready at hand, also consider purchasing their iBook version of that book for your iPhone or iPad. You can read more about the mobile version here.

Some personal rules that I use

If you come across a Speedmaster Pro 145.022 that you really like but has – for example – an incorrect bezel and hands: if it doesn’t speak to you otherwise, let it go. Finding the correct parts is becoming a burden and it is better to wait for something better to come along. It might also be cheaper in the end.

A Speedmaster that is just plain dirty, needs a new crystal and has some wear: clean it yourself using a soft toothbrush, an ultrasonic bath for the bracelet and get an estimate on having it serviced (properly) without having to swap some crucial parts. A watch with no bracelet isn’t really an issue as well, but calculate a few hundred bucks to find the right one. If you are desperately seeking the 1039 bracelet, these can fetch over 1000 Euro alone in nice condition. A 1171 bracelet, or the later 1171/1 (these were delivered as spare part since the 1980s) can be found for around 400-500 Euro, will always work for any of the 145.022 references/years.

A Speedmaster Pro 145.022 that I would really leave alone without even thinking about it, would be one with a replacement dial. On the other hand, if one is offered to you for very little money, one could decide to use it as a daily beater watch or invest a bit in an original dial. But the price is very decisive here.

In any case, always make sure to give the watch a full winding (ask the seller not to have it fully wound when visiting), pull the crown, move the hands around and use the chronograph. If everything works and feels correct (no heavy winding turning of the crown in general), you should be fine. However, always try to see if there is an opportunity to see the movement and look for corrosion.

If you have questions or additional tips, leave a comment! Let’s help each other out here!

A big thanks to all who contributed images of their 145.022 watches in the past.

*The original article was published in 2015, but has been revised and updated in March 2017 and December 2019.

Hot Topics
Introducing: The Omega Speedmaster Super Racing With Spirate System
165 comments
Design Vs. Specs — Which Is More Important To You When Buying A Watch?
86 comments
My Predictions For New Omega Speedmasters In 2023
54 comments
The Time To Buy Is Now: How The Current Economic Climate Influences Watch Buying And How You Should React
51 comments
A Regret-Free Guide To Buying Your First Luxury Watch — Part Three: Higher-End Options From Omega, Rolex, Grand Seiko, And More
48 comments
Popular
Omega Speedmaster Hodinkee 10th Anniversary Limited Edition
Robert-Jan Broer
7
Hands-On With the Seiko Prospex SRPC91K1 – Save The Ocean
Robert-Jan Broer
15
Hands-On With The Patek Philippe Nautilus 5740/1G
Robert-Jan Broer
2