It’s Speedy Tuesday! Just a few days before BaselWorld will start and Omega unveil the new Speedmaster Professional 45th anniversary Apollo 11 limited edition. At least that it was we suspect they will be doing besides demonstrating the new Omega Seamaster Master Co-Axial Chronometer. Just before doing so, we would like to grab your attention for the discontinued* Omega Speedmaster Professional X-33 3290.50 (or 3990.50 for the version with kevlar strap only). 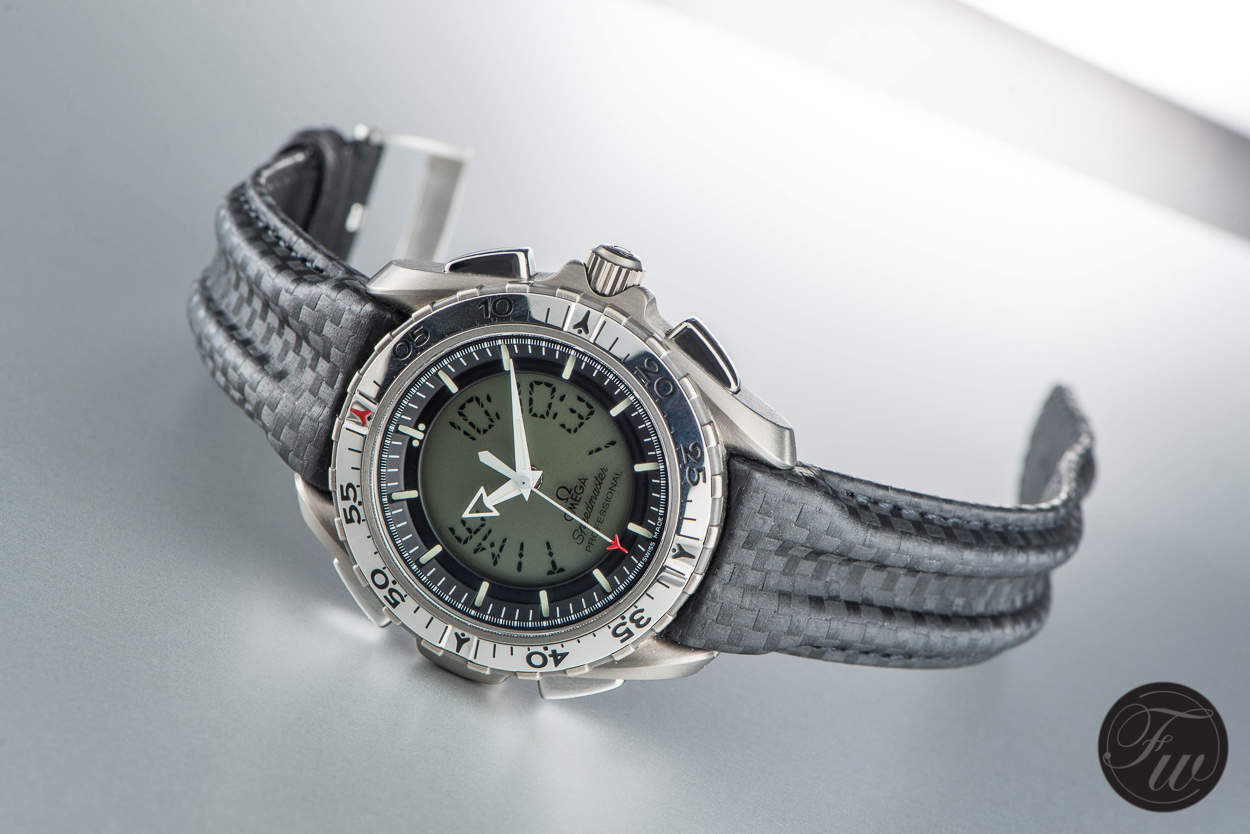 This Speedmaster Professional (it really is part of the ‘Professional’ collection, like the LCD quartz models from the late 1970s) was developed by Omega using the input of NASA astronauts and pilots with regards to useful functionality for them.

Actually, I’ve been told by General Thomas P. Stafford (in the picture below in the grey sweater) that he designed the specifications for the Omega Speedmaster X-33 watch. 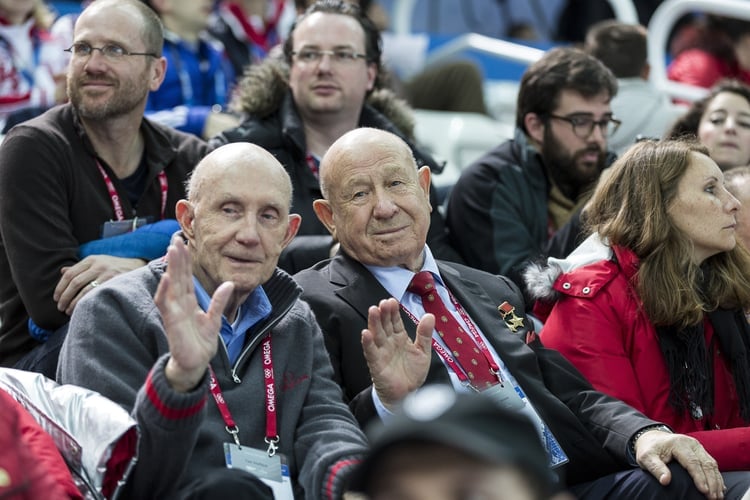 Former NASA astronaut Stafford next to cosmonaut Leonov. In the row about you see Jason Heaton, RJ Broer and Ben Clymer.

All required specifications were met after 5 years of severe testing and prototyping with the help of European (ESA) and American (NASA) astronauts. Also pilots of the Blue Angels and Thunderbirds were involved in this process. Very early prototypes of this watch (around 1995) were basically using titanium Seamaster Professional Chronograph cases with 4 pushers and a large digital display. The dial said ‘Flightmaster’ and no signs of Speedmaster (Professional) or X-33 yet. 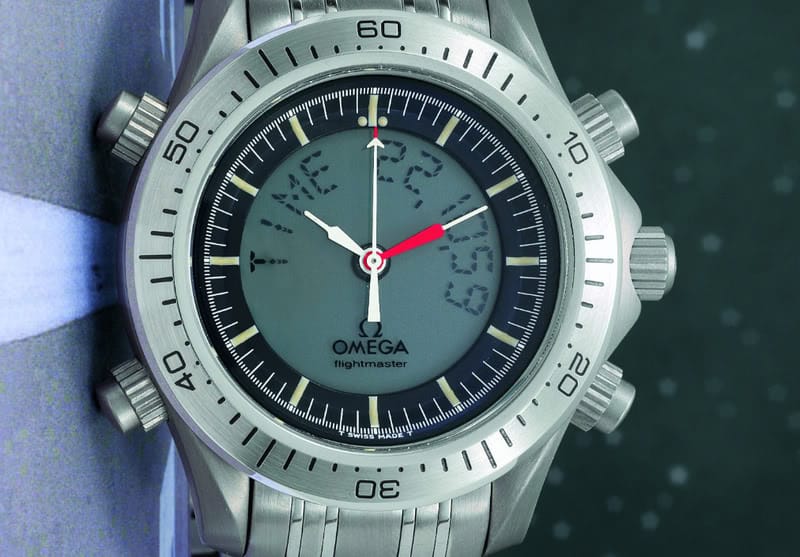 The result of all this prototyping and discussions with astronauts and professional pilots was the Omega Speedmaster Pro X-33 3250.90. A titanium case with 4 pushers, a large display with local time, date (perpetual calendar), programmable alarm, mission timer, mission alarm, universal time (GMT), universal alarm, countdown timer (with alarm) and a chronograph.

The alarm on the X-33 is something special. It is loud. LOUD. An amazing 80 decibels is what this watch can produce, using the case as an amplifier. When I was in an air plane recently, the alarm of my X-33 went off and a number of the people around me in the cabin (including stewardess) slightly panicked. So it is wise to check (or disable) the alarm on your X-33 before boarding.

The Omega X-33 was also designed to be operated with gloves. As the crown is not that big, you probably wonder how this can be used with gloves. Well, the crown has no traditional crown (turning) functionality but it just another pusher. So in total the X-33 has 5 pushers. The crown is used to browse the functions of the watch and the other buttons are used to stop, start and correct. The lower left pusher is used to activate the light of the display (8 lux) and the upper left button is used to swap between the current function of the dial (for example date or chronograph) and the mission timer. The mission timer (MT) is always the 2nd function of this button. 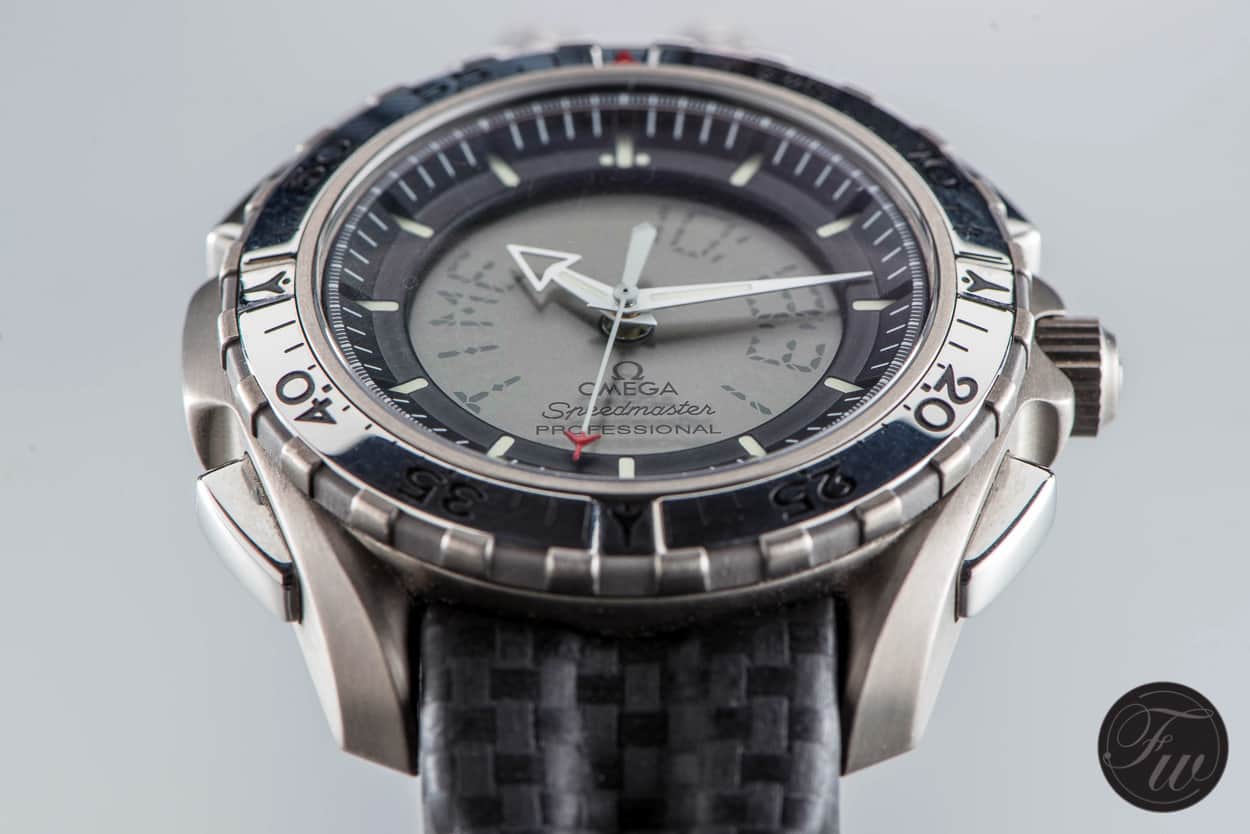 The unidirectional bezel is a bit of a strange thing on this watch, as it surely isn’t a diver’s watch. However, it can be used to easily time activities. If you need to time something for 10 minutes, just rotate the bezel and point the ‘0’ at the minute hand and keep track if it until it reaches the ’10’ marker. However, I would personally either use the count down timer (and have it beep at 0) for this or the chronograph. 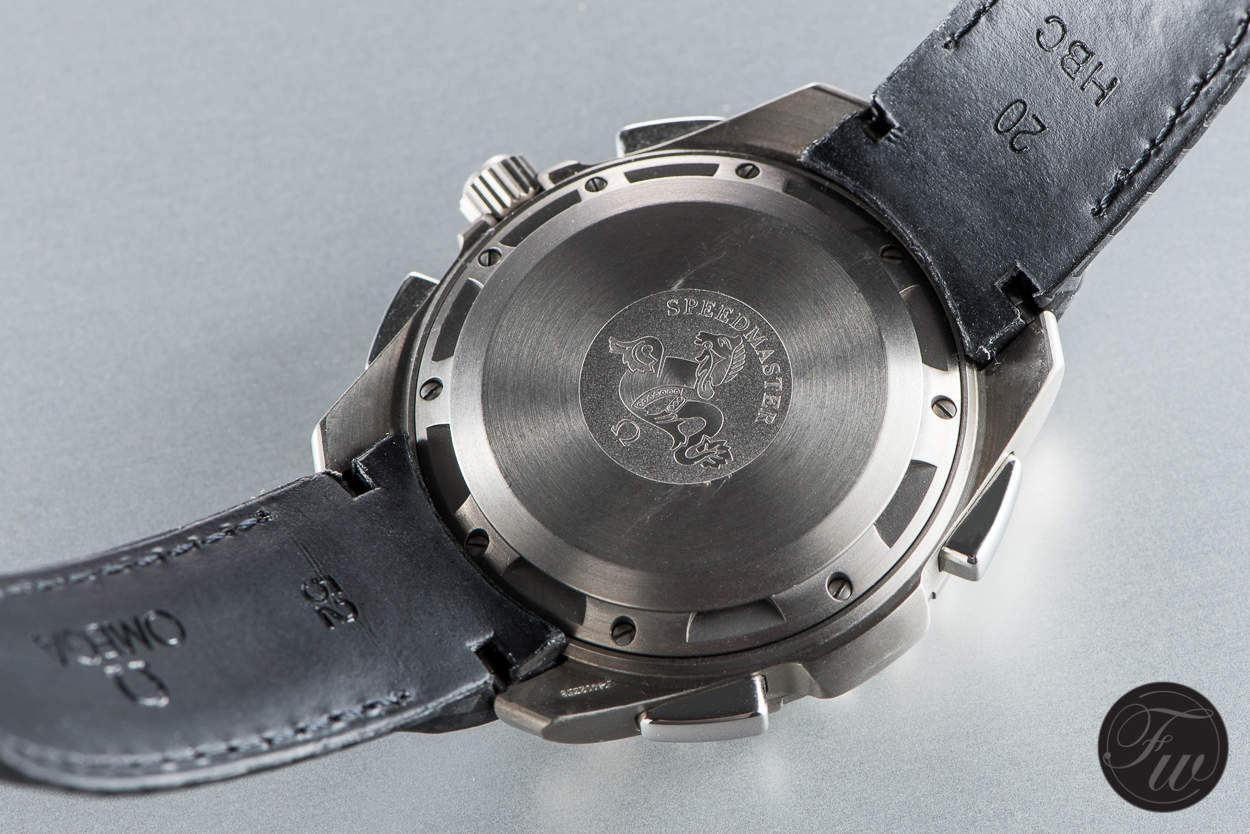 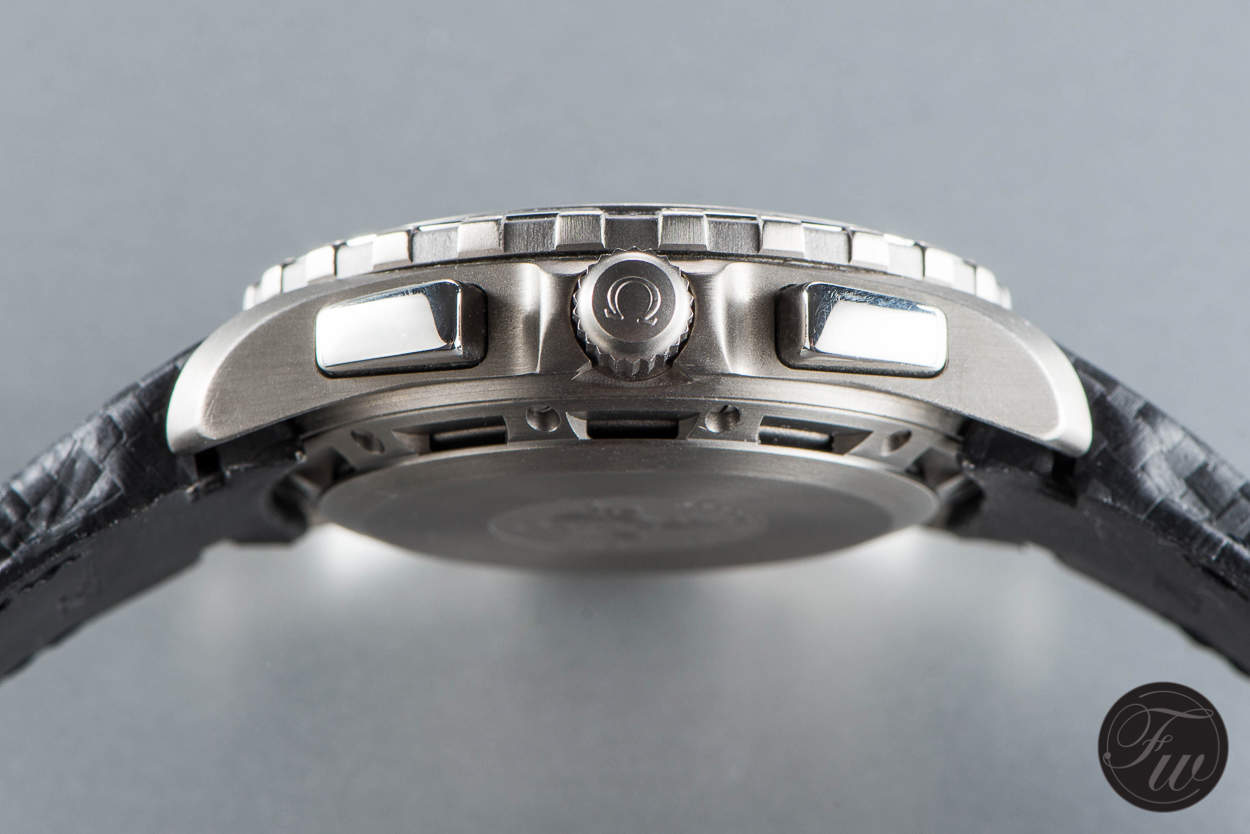 As written above, this Speedmaster Pro X-33 was available with a kevlar strap or titanium bracelet. In fact, this is the 1st Generation X-33 as later on (ca. 2001) the watch was updated with a new crown, satin brushed bezel and buttons and a ‘Certified by NASA for Space Missions’ engraving in the case back. We refer to this model as the 2nd Generation X-33. If you have a 2nd Gen X-33 please contact us as we would love to do a 1st Gen X-33 versus 2nd Gen X-33 article soon. The 2nd Gen X-33 also came with a different type of kevlar strap.

For my own pleasure, I added an original kevlar strap of the 2nd Gen X-33 on my 1st Gen X-33 (see below). This green strap was done for a limited series of Speedmaster X-33 models for the Japanese market. 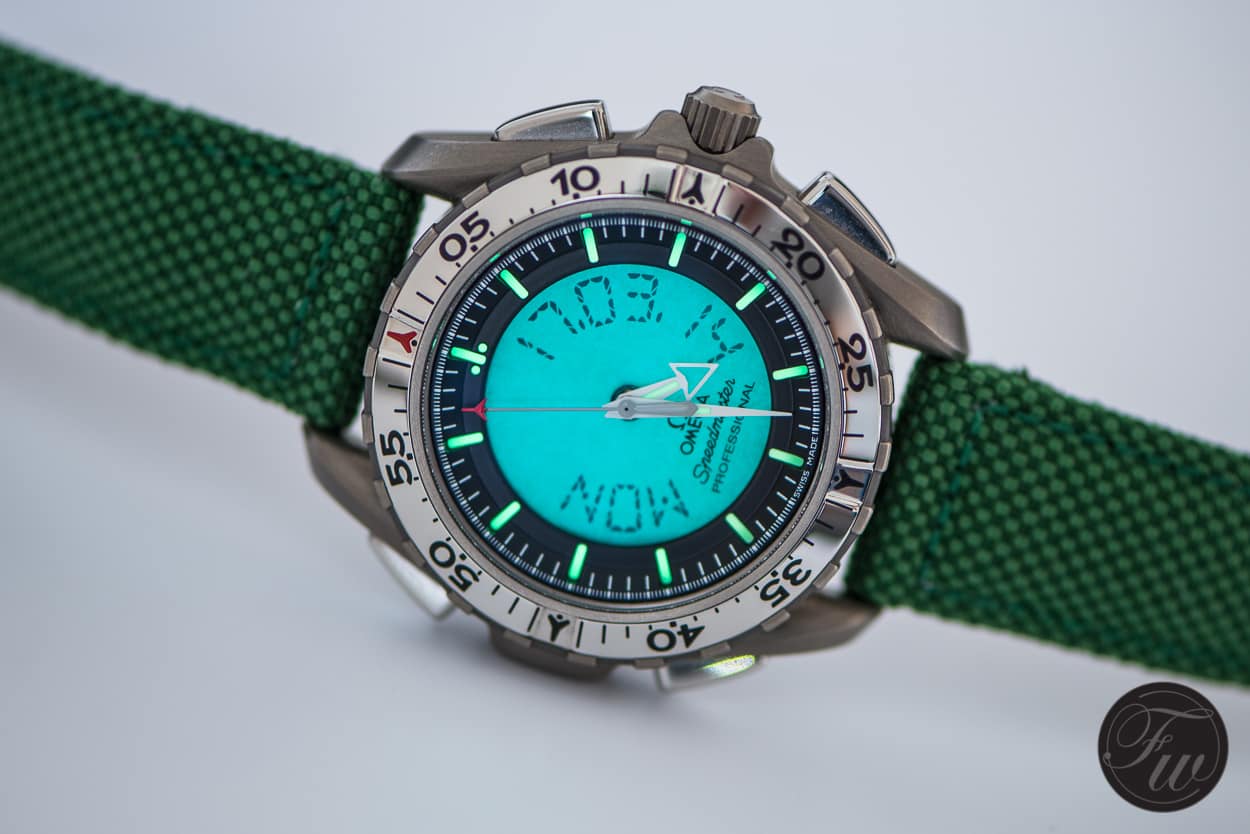 An awesome overview of all X-33 models and functionality can be found on the ialreadyhaveawatch website, here. Again, please get in touch with us if you have an Omega Speedmaster X-33 2nd Generation. We would love to zoom-in on the differences between those models in more detail.