They say that absence makes the heart grow fonder and such seems to be the case with the out of production Omega Speedmaster Tintin. Even though the watch was only introduced at Baselworld 2013 and then cancelled after roughly one to two years of production (it depends who you ask), I thought it was a good time to take a look at what has occurred around this controversial Speedmaster and why it’s a watch worth watching. Also, since I own one, I’ll throw my own 2 cents into the mix. 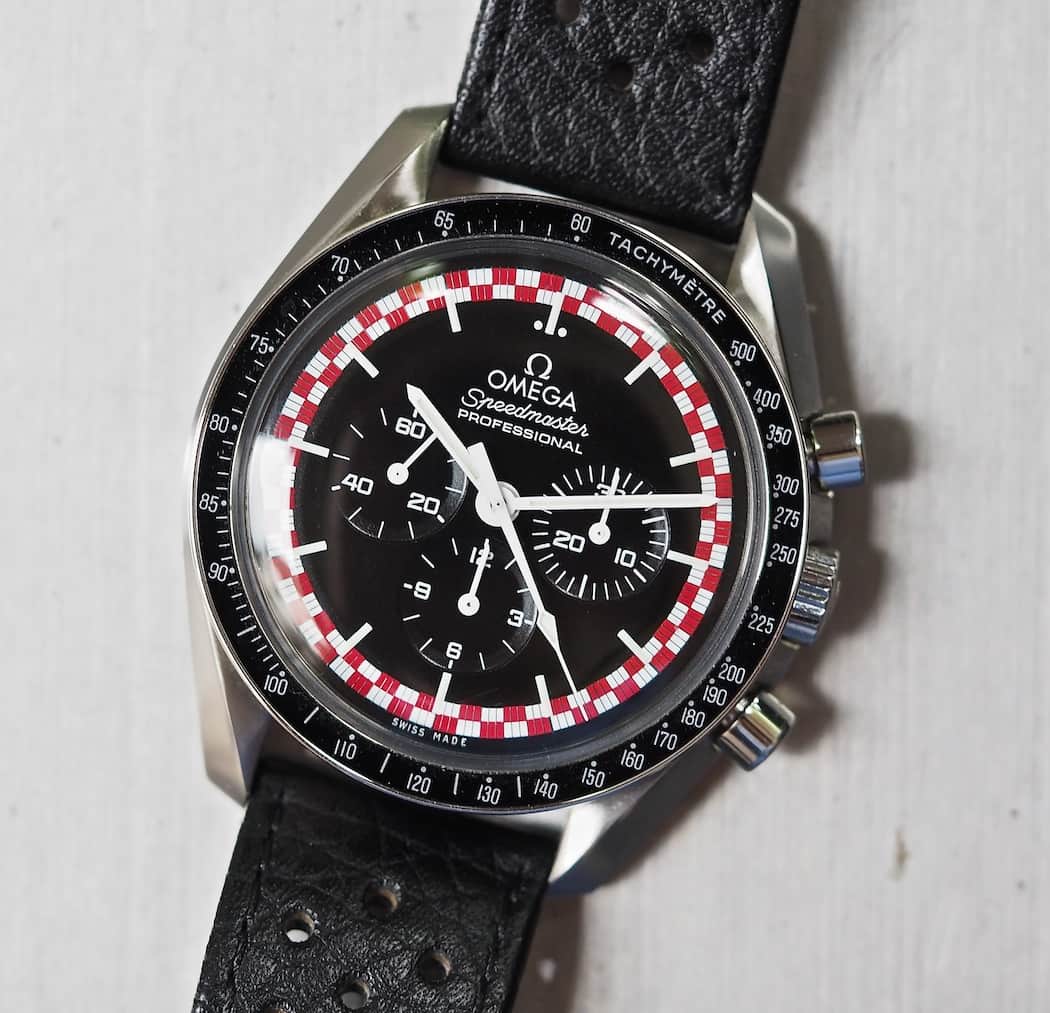 The Speedmaster TinTin is a wonderful study in contrast

As mentioned, Omega very quietly introduced the Speedmaster Tintin in 2013 at Baselworld as ref. 311.30.42.30.01.004. I actually attended the show as a normal public visitor that year and can recall seeing it. If you’ve been to Baselworld, or haven’t been, Omega has a massive booth. In fact, it probably could envelope at least a couple boutiques and it features two floors! The whole thing is surrounded in glass and that enables the general attendee to walk around the outside and look into the windows, which are filled with watches like a normal shop. When looking at the front of the booth, it seems that Omega puts all the featured new products there, but some are interspersed within the windows around the sides and back. If I recall correctly, the Tintin sat on the right side and while it wasn’t hidden, it certainly didn’t take center stage. Why was that? 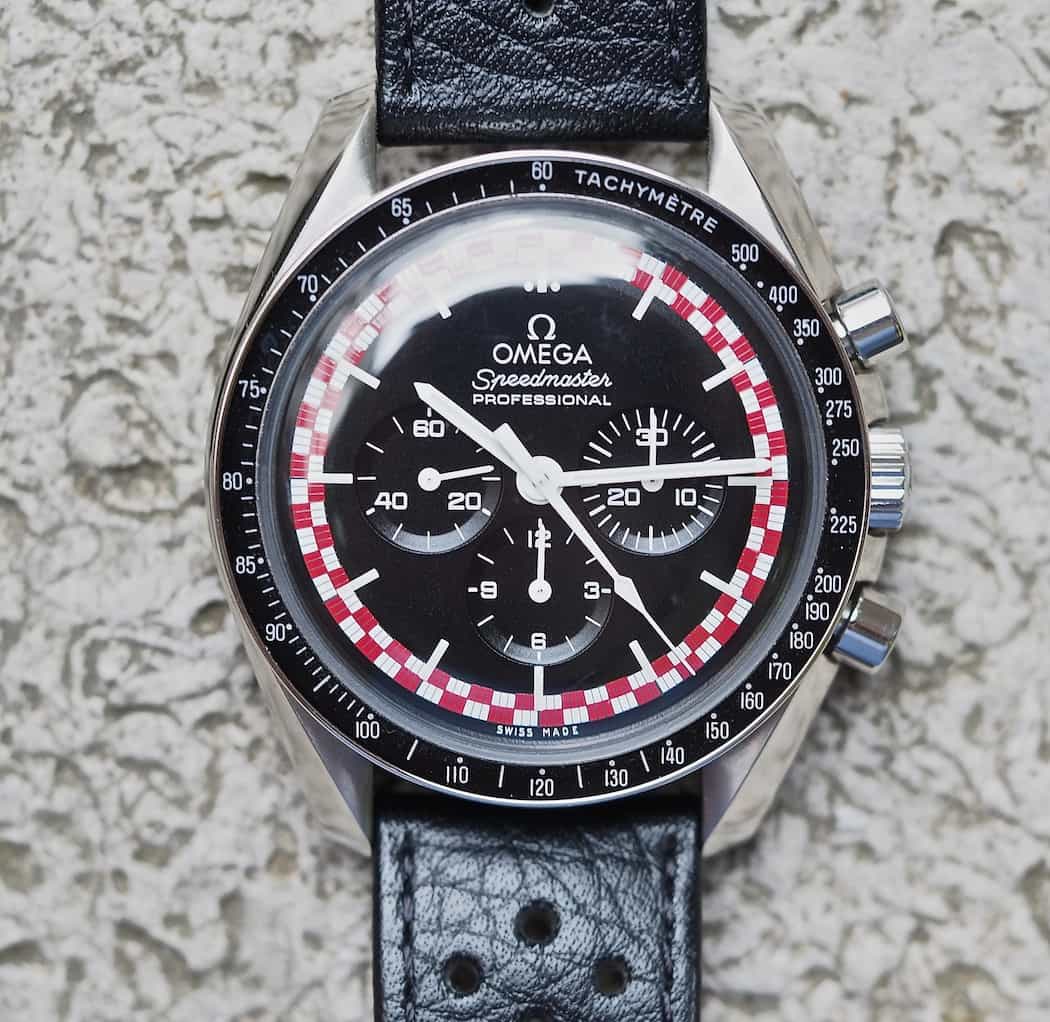 The Speedmaster TinTin is my “go to” watch on Speedy Tuesday

The Speedmaster Tintin was a False Start

Theories abound, but the answer likely resides with how the Speedmaster Tintin came to fruition. Robert-Jan covered this all the way back in 2013, but it seems that Omega was working towards a watch officially licensed by the family of the Tintin creator (Hergé) in celebration of the cartoon and comic strip. The lead character famously goes to the moon in a red and white-checkered rocket that apparently became the inspiration for the dial you see before you. Omega even went as far as to create a dial with a rocket ship on it and a caseback in the vein of the Mission Patch models – think flat colored decal – before the family decided to nix the project. Robert-Jan featured a picture of the Hergé (Tintin) albums that are associated with this specific watch but was asked, no – required, to take it down under threat of suit by Hergé. The legal letter is available on request to those with the Tintin watch, for collecting’ sake, just shoot us an e-mail. The original Speedmaster Tintin with rocket at 11 o’clock is in Biel, but not available to the public. Robert-Jan has seen the watch, but was not allowed to take a picture, of course. After all this, though, it seemed that Omega was left with a bunch of checkered, but not “rocketed”, dials. So, what to do? You guessed it – make a new Speedmaster Professional. 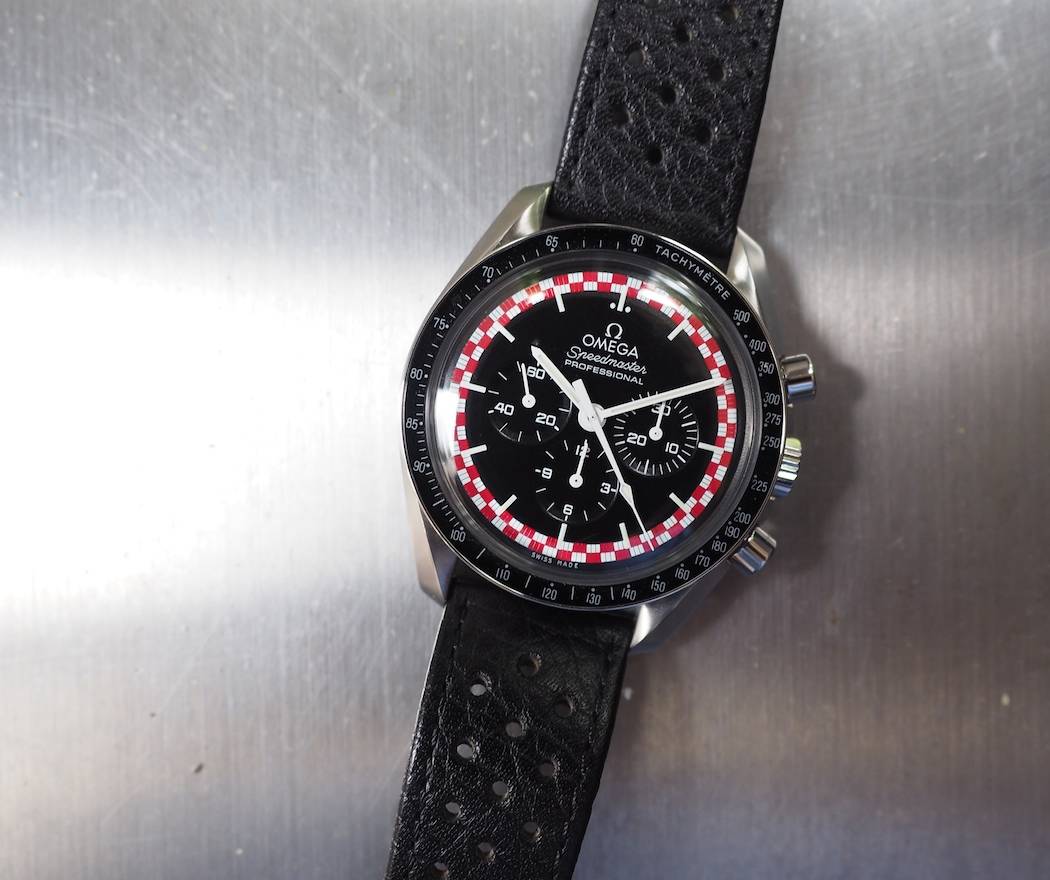 People Disliked the Tintin on Day One

The Speedmaster Tintin is truly a stock standard Speedmaster Professional down to the Hesalite crystal that was mercifully left as standard equipment by the team from Bienne. The only things that differ are the dial and the fact that the normal NASA Flight-Qualified verbiage on the back is filled in red versus the standard black. Oh, and it cost something like 70 Euros more than the standard piece. That’s it – but as the market first proclaimed, these small changes were deemed as so much more – or less. Forums and blogs universally panned the Tintin upon its release. Omega, who is no stranger to releasing limited and special editions, was looked upon by many as overzealous. Plus, many felt that this was the watch that showed the brand was running in the wrong direction and endangering the reputation of its beloved and sacred Moonwatch. After all, with a near annual release of a limited Speedmaster, how could the brand throw another watch out there? Well, I’ll add some commentary here because if I had to guess, roughly 99% of the people who were upset had not seen the watch in person. Plus, and I mean this with all due respect, the high exposure, seemingly rendered, images found on Omega’s website don’t do the Tintin any favors at all (it’s oddly still on there). 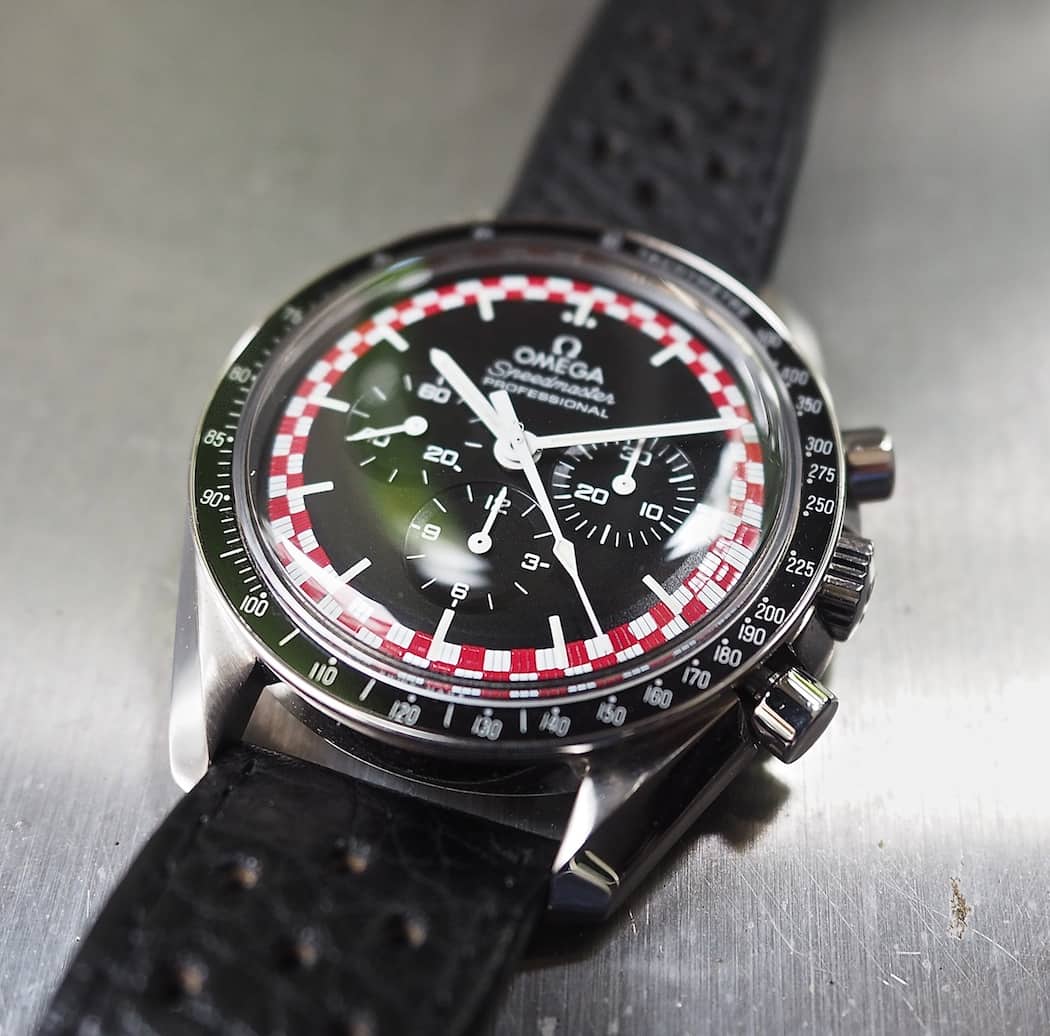 Now, I had seen the Speedmaster Tintin live in 2013, but it took months – something like 7-8 before I saw the watch in stores again. By this time, and as noted in my last foray into Speedy Tuesday, I had Speedmaster fever in a bad way. I was really struggling to decide between a normal Speedy Pro and the Tintin and almost pulled the trigger on each during separate occasions only to wait. In fact, I still recall almost buying a Tintin at the Omega boutique in Heathrow Airport at quite a good price during a low spot for Pound, but decided to wait. It was then that I first contacted Robert-Jan and asked his thoughts about the watch and he confirmed a rumor that I had read; the Speedmaster Tintin was going away after a year or so of production. This had my “Spidey senses” tingling and with RJ’s help, I got into touch with Ace Jewelers in Amsterdam and consummated the deal.  In fact, my watch showed up on a prior Speedy Tuesday over two years ago! 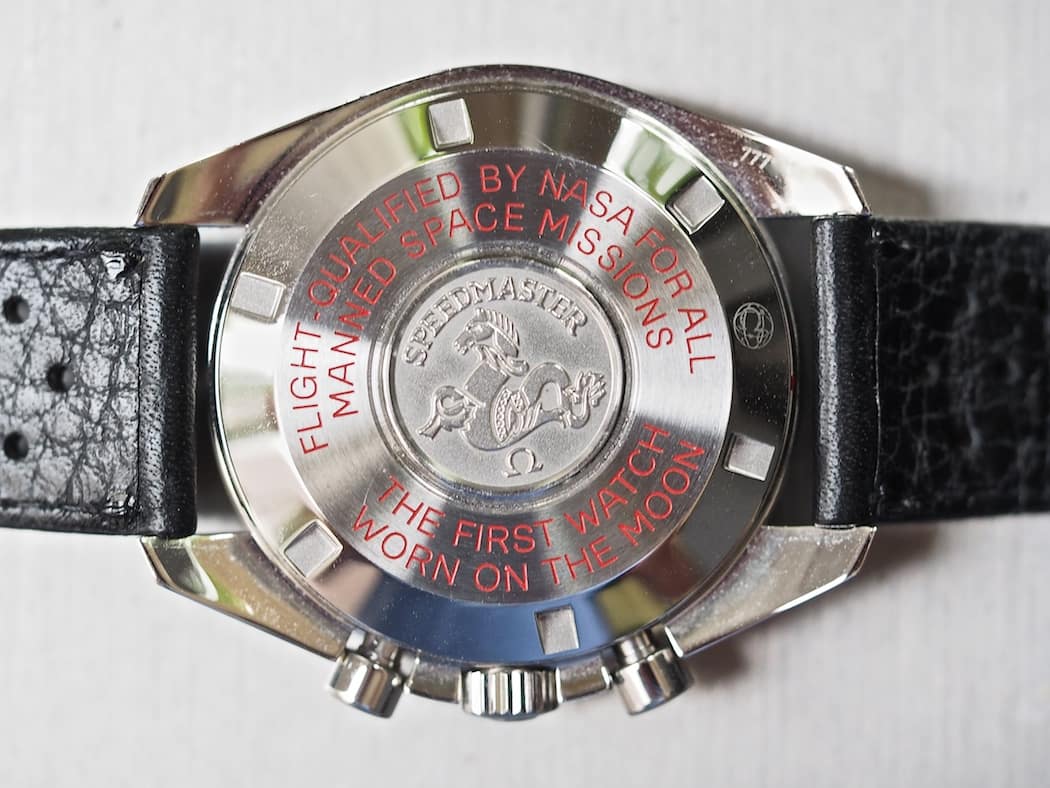 Why I Bought a Speedmaster Tintin

So, what led me to purchase the Speedmaster TinTin after all the back and forth? I have several reasons. First and foremost, I love the look of it – plain and simple, but we will talk about that a little later. Second, Omega releases limited edition Speedmasters on a regular basis and special editions every couple years or so. I happen to really like most of these – they’ve been bang on over the last four years or so in my opinion – but the TinTin was neither limited nor special. It was a regular serial production model and the fact that it was cancelled so soon after its introduction makes it somewhat of an aberration from a big professional company that doesn’t normally do such things. Second, the other name this watch has obtained is “Racing” and I only know of two other times that the brand offered serial production racing dials on its production watches and that was with the 145.012 and 145.022 (click here for our most recent article on the original 145.022 Speedmaster Racing models). If you don’t know about these pieces, they’re classics and stupidly hard to find. 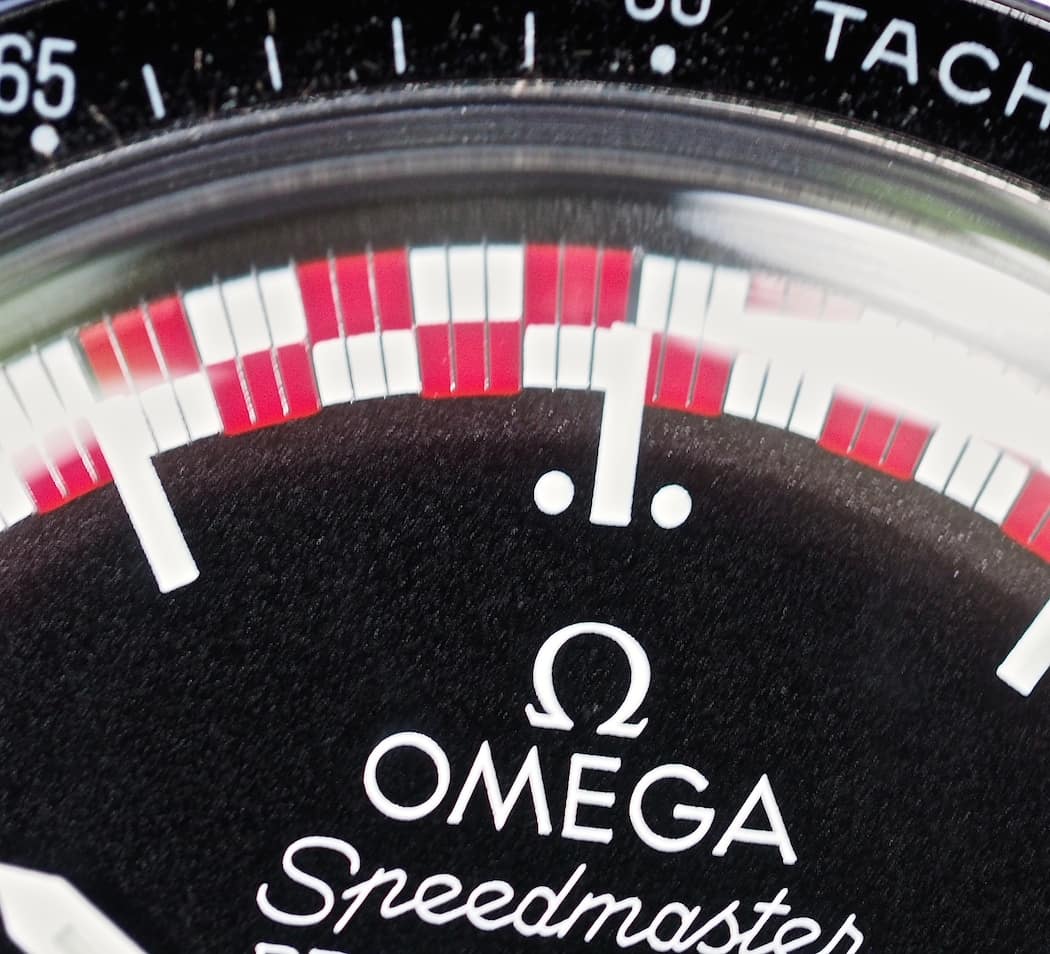 In this macro of the Speedmaster TinTin, see how the red overlaps the white on the track – it’s not perfect, which makes it fantastic. Also see the dial surface and how it dips to form a “step”

Now, before you jump to conclusions and think I’m signaling the next great investment in watches or trying to start a craze, I’m not. However, I do think that the Speedmaster Tintin has a lot going for it. It has a painted dial in a regular production model and that, to me, makes it very special. As someone who is almost strictly into vintage, the Tintin was and is very attractive to me. Throw that dial under a loupe and you’ll see imperfections galore. While some would call that sloppy, I actually think it’s marvelous and a rare return to visible handcrafting. 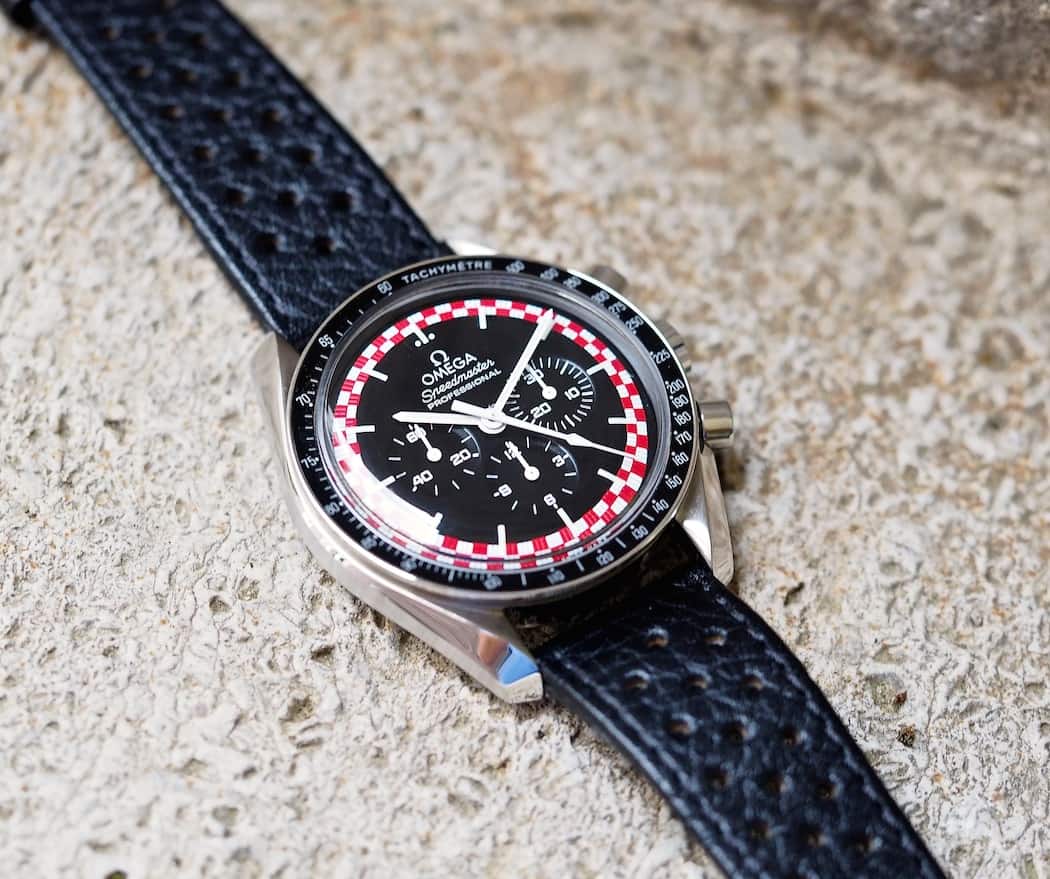 Short production plus a racing style dial make the Speedmaster TinTin quite compelling for collectors.

The Internet is Abuzz with the Speedmaster Tintin

Plus, it is clear that I am not alone in my love for the Speedmaster Tintin. I know of at least two big-time vintage collectors who have added this watch to their collections and they love it. Also, and this is interesting, over on Omegaforums.net, a thread exists that is now something like 27 pages long and with over 500 posts that is purely dedicated to the TinTin. Yes, it meanders at times, but the thread creator, @blubarb, has asked for serial number information in order to try and figure out production totals because Omega isn’t talking. In fact, he has even cited the German Tank problem as his statistical method for estimating the number! His feeling, along with many others, is that Omega cancelled production after it exhausted its stock of dials – less some for service – and that total was likely in the realm of what Omega would have planned for a limited edition. As of now, most thread participants feel that production was between 1,000 and 2,000. 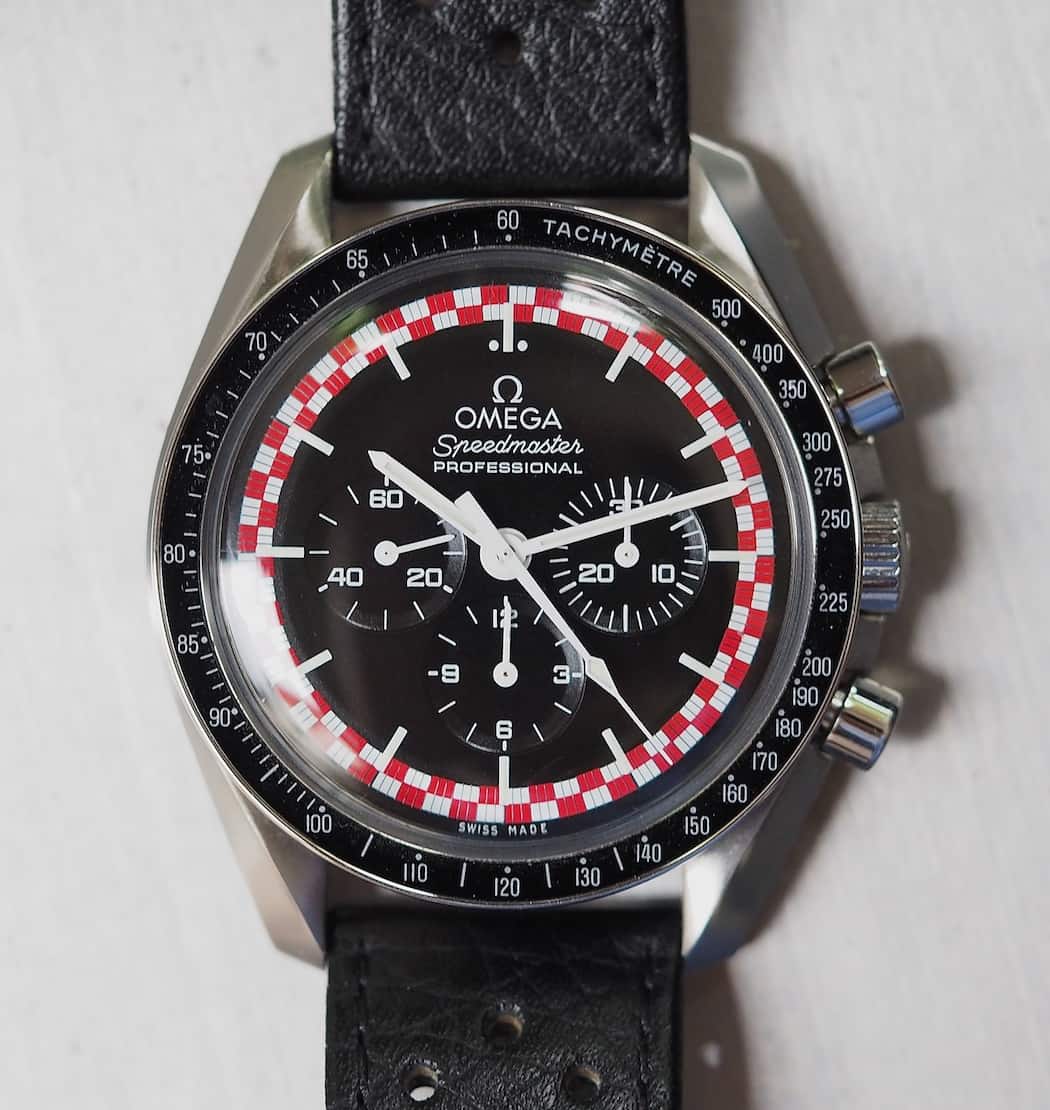 In my opinion, the Speedmaster Tintin looks its best on a simple racing strap

If there is any controversy around the Speedmaster Tintin, and there is some within the thread, the one thing that jumps out is that most people love this watch in person. It simply shows so much better than it does in pictures. The red is very rich while the surface of the dial takes on a matte, yet sparkly look compared to the normal black Speedy. Plus, and this took some macro work, it doesn’t contain an iconic step dial, but the illusion is certainly there. Another point worth noting is that I think this watch looks so much better on a strap than its stock bracelet. I’ve mentioned many times that I am no fan of the current Speedy bracelet due to its shiny little links and I think it truly takes away from the dial. This is exacerbated in the case of the TinTin where a simple black leather-racing strap really puts the focus where it belongs: on that beautiful dial. My strap is from the guru, Giuliano, and it mocks vintage Corfam. Plus, I paired it with a 25 Euro Omega pin buckle that I picked up at the local boutique; it has to be one of the cheapest things in the shop! 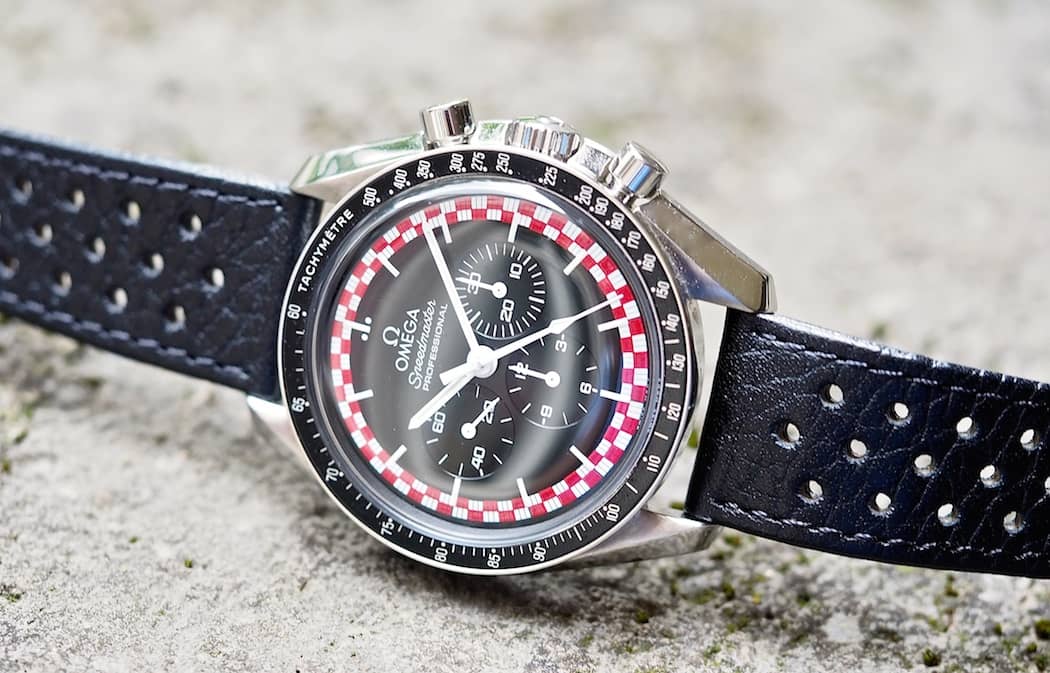 Will the Speedmaster Tintin become a valued collectible one day? Who knows, but it’s a lovely watch!

Regarding availability of the Speedmaster Tintin, I still read reports of people finding them new within the Omega Boutique network but this seems to be drying out. Those that show up at grey market dealers as new and at a discount to the roughly 3570 Euro original price seem to get snapped up quickly now as the collector market seems to be out in force. Whether or not the Tintin has what it takes to be a true collectible in the future is anyone’s guess, but I definitely think that it contains a lot of the right attributes.

Short production plus a racing style dial make the Speedmaster TinTin quite compelling for collectors.

The Speedmaster TinTin is my “go to” watch on Speedy Tuesday

In this macro of the Speedmaster TinTin, see how the red overlaps the white on the track – it’s not perfect, which makes it fantastic. Also see the dial surface and how it dips to form a “step”

In my opinion, the Speedmaster TinTin looks its best on a simple racing strap

Hot Topics
Introducing: The Omega Speedmaster Super Racing With Spirate System
149 comments
Design Vs. Specs — Which Is More Important To You When Buying A Watch?
85 comments
The Updated Bracelet For The Omega Speedmaster Professional 3861 — Here Is What’s New!
51 comments
The Time To Buy Is Now: How The Current Economic Climate Influences Watch Buying And How You Should React
49 comments
Introducing: The New Cartier Tank Française
49 comments
Popular
(From The Archives) Shut Up & Read The Truth About Cartier Watches
George Cramer
21
#TBT A Vintage Seiko Buyer’s Guide to Affordable Goodness
Michael Stockton
32
You Asked Us: Tissot Powermatic 80 Seastar 1000 or Longines HydroConquest
Robert-Jan Broer
20