Studio Underd0g is clearly not a brand that’s afraid to do something new. You could say that many brands think this way, but few produce such uniquely brilliant designs, which are both visually striking and totally bonkers while at the same time being oddly familiar. Now, with its latest release, the Mint Ch0c Chip, the British brand looks to everyone’s favorite frosty treat for inspiration. And what better flavor to inspire an English brand than one invented by a fellow Brit. It may be hard to believe that mint chocolate chip has only been around since 1973 when it was created by a student. Likewise, it’s hard to believe that Studio Underd0g has only been around for less than a year!

Some microbrands come onto the radar in full force just to fizzle out after releasing a debut model. You could not find a less accurate way of describing Studio Underd0g’s remarkable debut, and stunning follow-up. I vividly remember seeing the brand’s first three models, especially the Watermel0n model. It certainly helps to have some brilliant photography of your eye-catching product, and Olli-Pekka Hopia (a mandatory Instagram follow — @h0p1a) provided just that. But it wasn’t just the Watermel0n model that caught my eye, the Desert Sky and Go0fy Panda models (that Rob covered here) were also instant hits! Keep in mind that this is a brand that takes its roots from the idea that the watch industry takes itself too seriously, and if you don’t well, then you’re just not gonna get it. 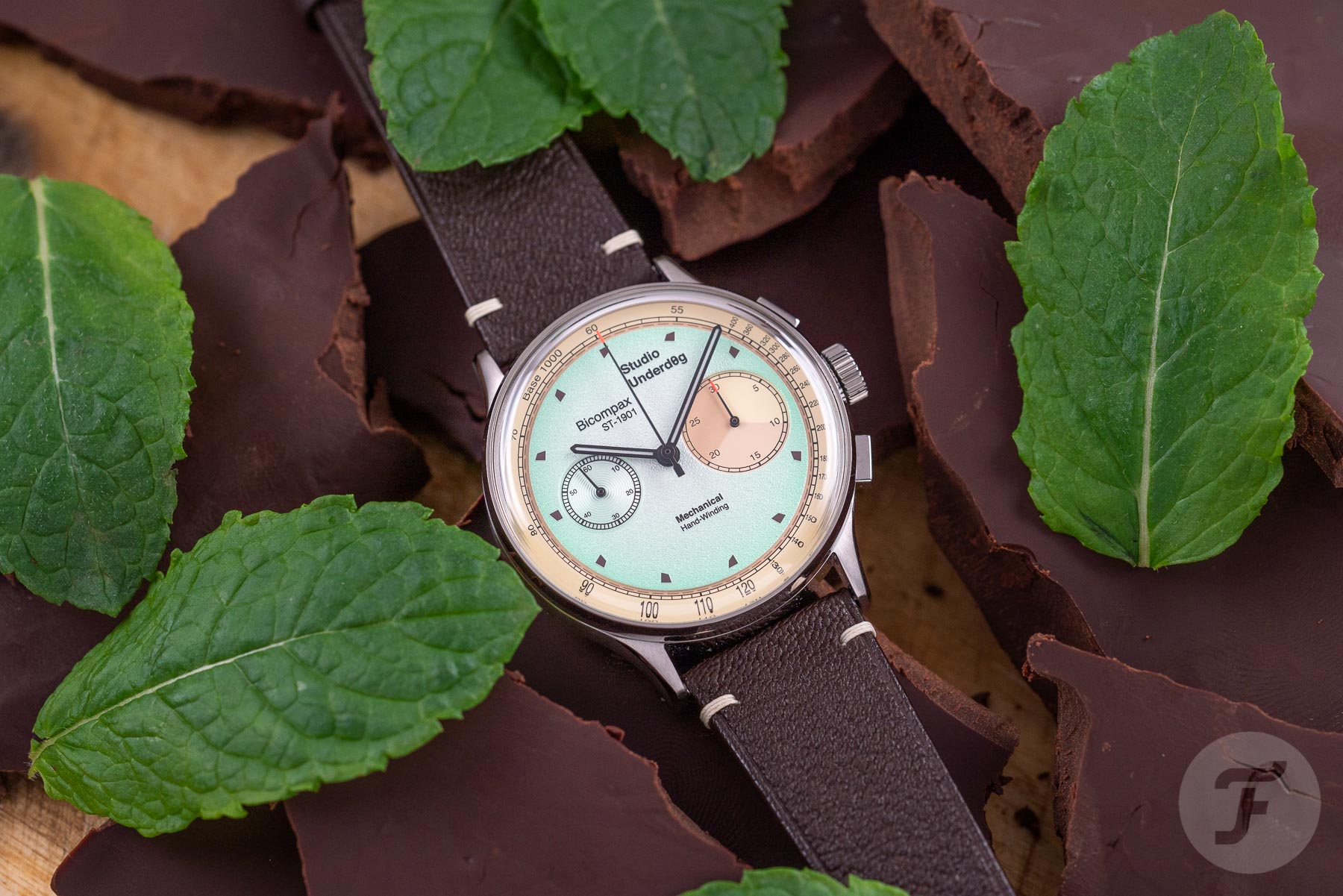 The latest and greatest

After a strong start, it can often be hard to follow up with something just as good if not better. Expectations are high and all eyes are on you, so what do you do? Do you take a left turn and go with something totally different? Or do you stick to the formula, change it ever so slightly, and subtly iterate on the winning formula to get another hit? There’s no fixed winning formula, and Studio Underd0g has gone with the latter, and I can’t help but feel that Richard has hit the nail right on the head. Anyone in the watch world can tell you that green has been the hottest color recently followed closely by beige/tan, and going with the mint chocolate chip colorway allows you to bring both of those colors together in perfect harmony. 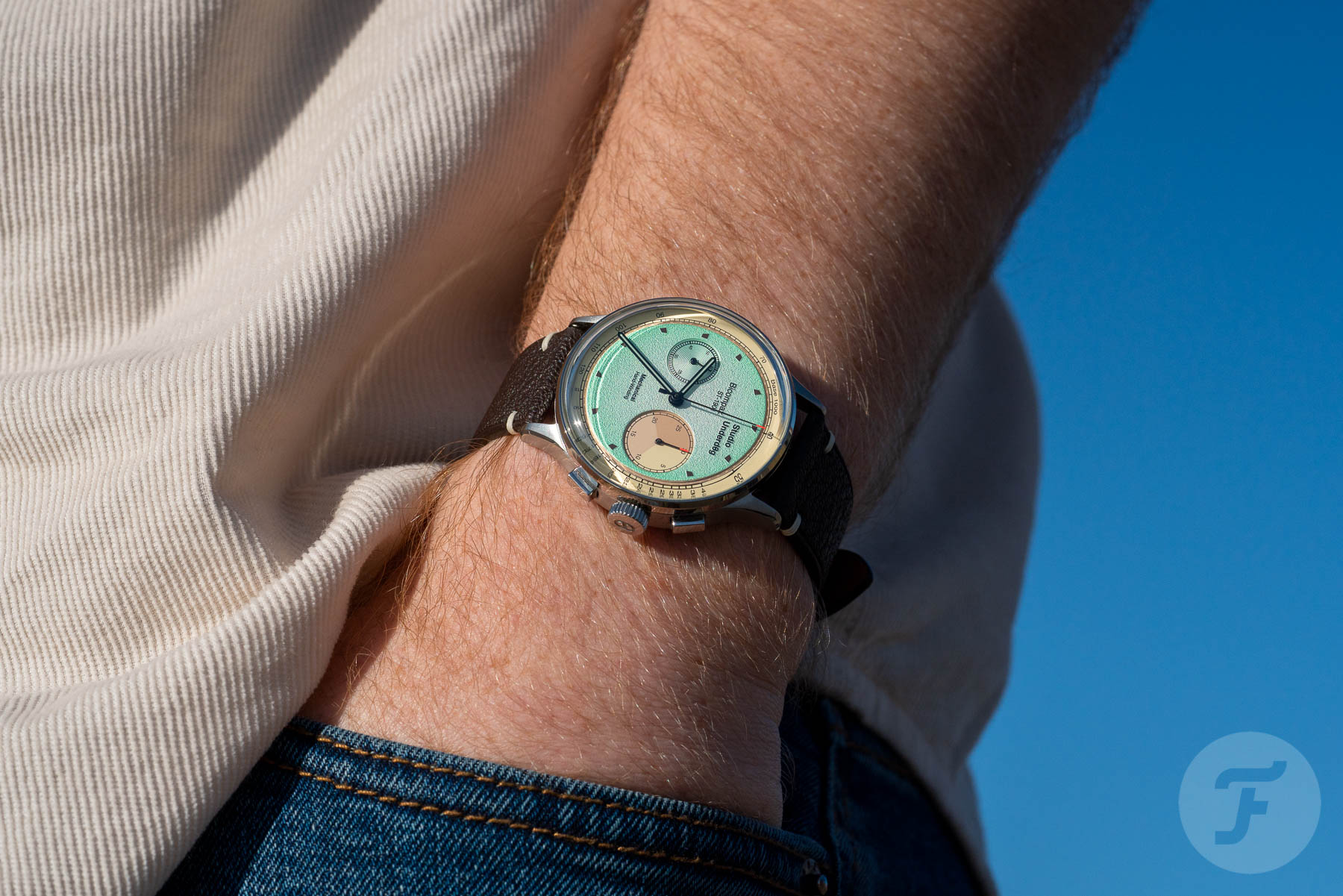 Plus, the brand having already established food in its design theme, incorporating ice cream seems perfectly logical without feeling like a gimmick. Even the wonderful strap is beautifully incorporated in the color scheme, but more on that later. Let’s first focus on what exactly makes this watch unlike anything else out there today. From the asymmetrical dial layout to the stunning textured two-tone dial, subtle details like the orange Chrono hand tips and chocolate chip hour markers make this watch a true visual spectacle. 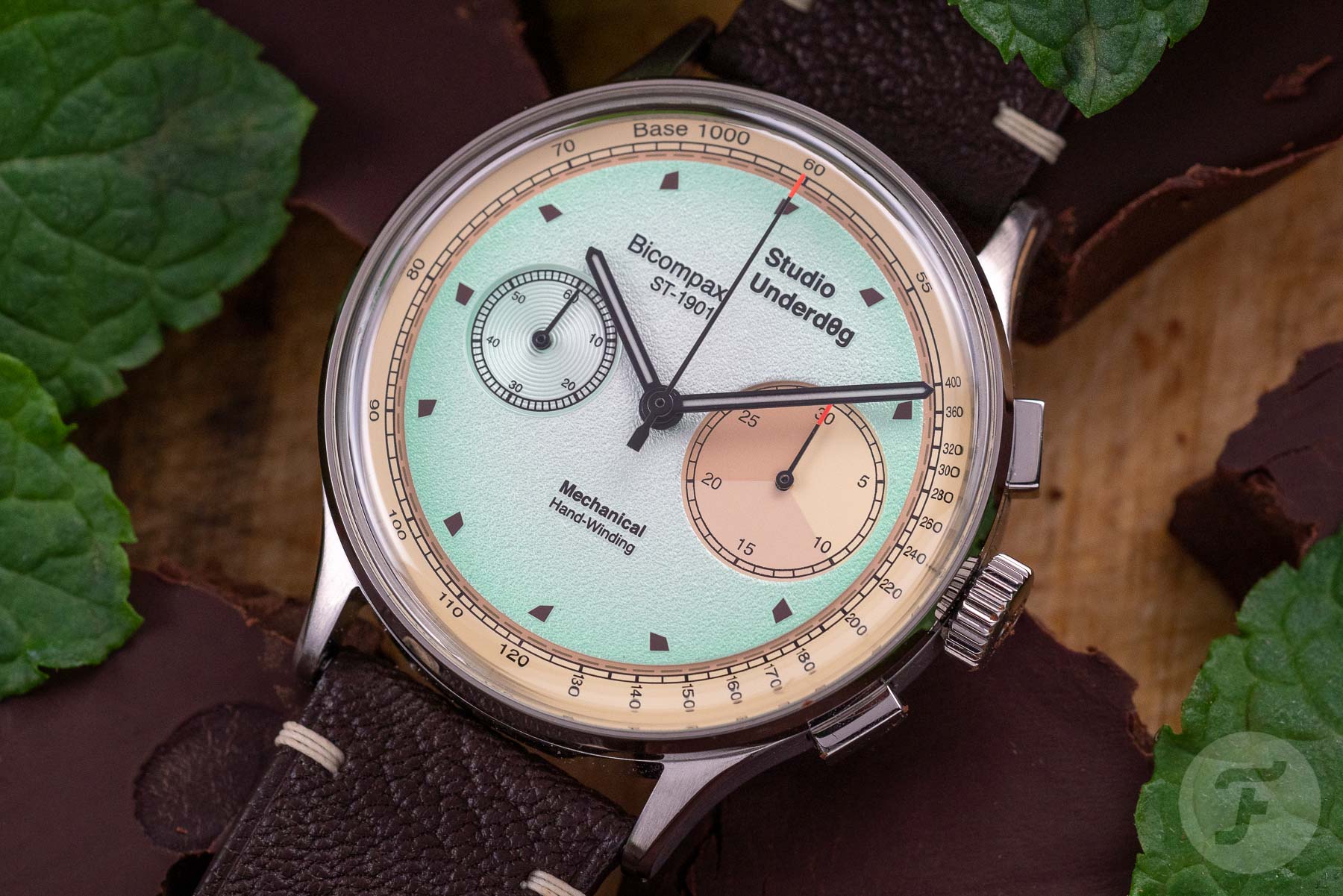 Don’t get me wrong, there’s a lot more going for this watch than just the dial, but it’s undeniable that the watch’s instantly recognizable yet different face is the piece de resistance. On the outer edge, we find one of the best tachymeter scales on a watch today. The markings are clean, clear, and beautifully executed, with a railroad track separating it from the ice-cream center. I love how this scale does away with the typically less useful 500 marking and gives us 55 instead. Both in km/h and mph it’s undeniably more useful, at least for Seat Ibiza driving laypeople such as myself. The dial’s center features a beautiful mint-green gradient, two sub-dials, and chocolate chip hour markers. You heard that right, whereas the Watermel0n had pips, here we have choc-chips! 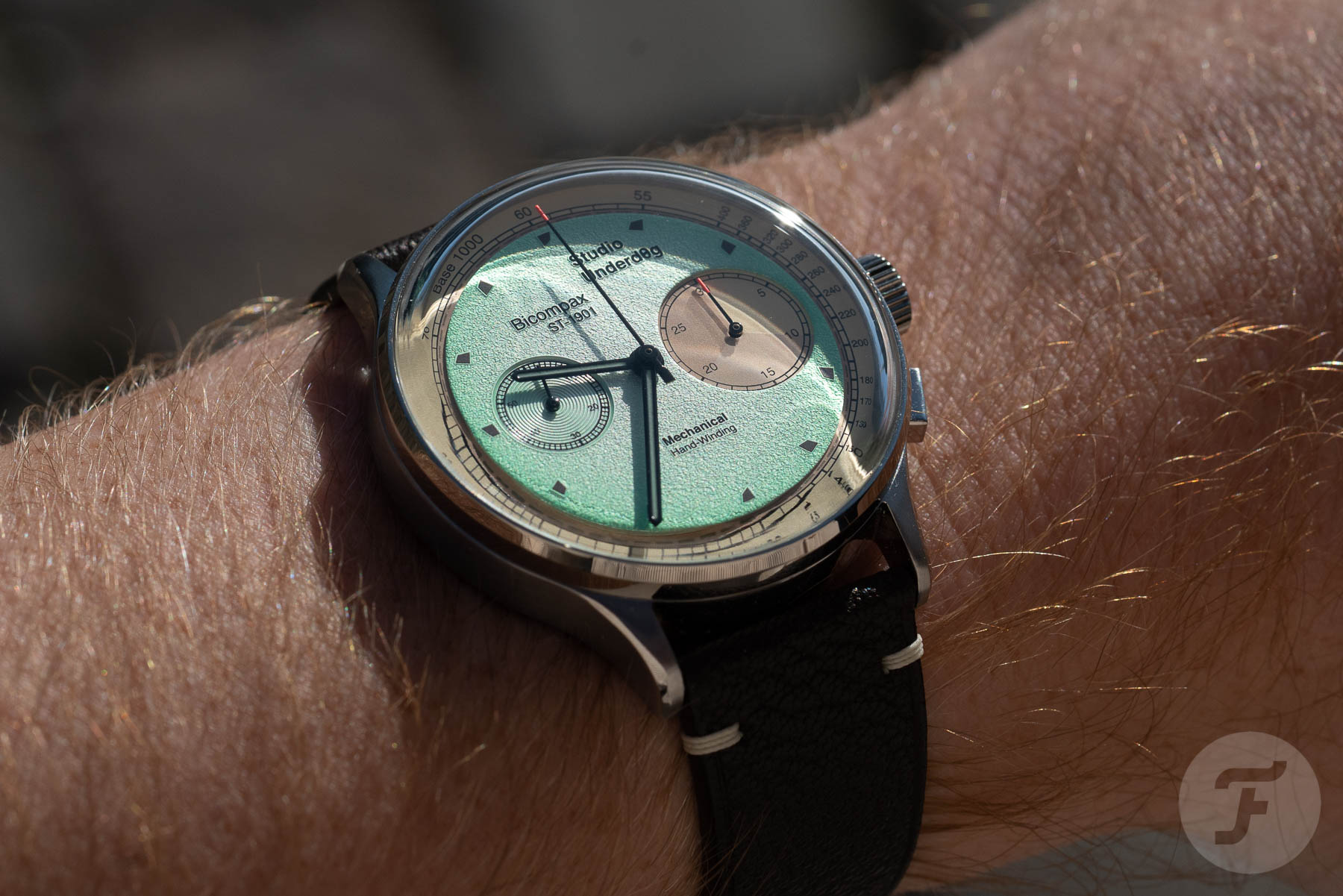 At the 9 o’clock position a small running seconds sundial with a radial pattern and matching railroad track. The 3 o’clock side houses the chronograph register, significantly larger than the running seconds, interrupts the mind green of the dial. The sub-dial makes room for three shades of the tan/off-white color used on the outer tachymeter scale. At the 12 o’clock position we find the brand’s name and “Bicompax ST-1901”, either side of the chronograph seconds hand’s resting place. At first, it takes a second for your eye to get used to this lack of symmetry, but once it does, somehow the layout makes perfect sense. Finally, at 6 o’clock the words “mechanical” and “hand-winding” let you know about the watch’s movement, the model having been revealed in the 12 o’clock markings. 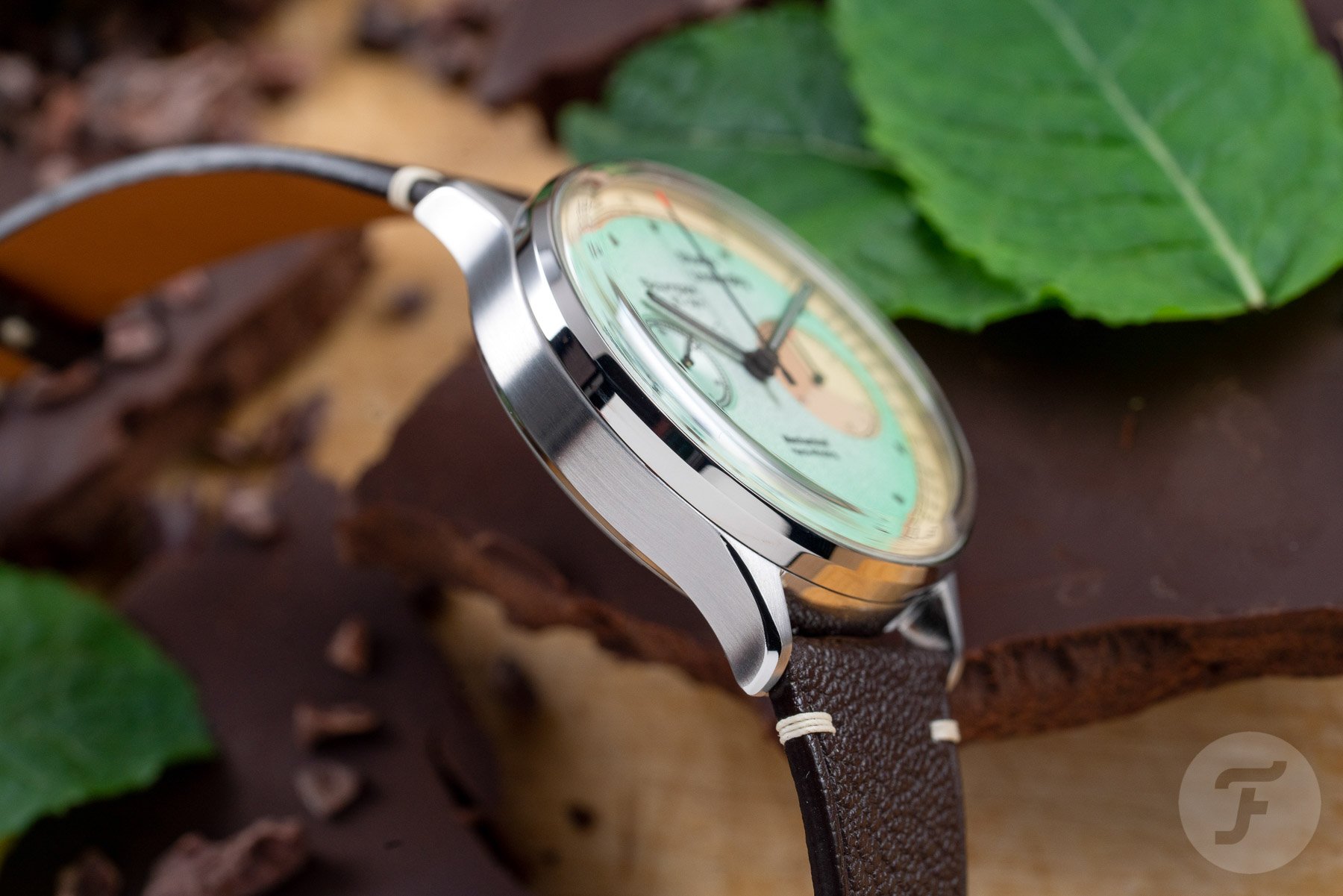 Inside the 38.5mm x 13.6mm 316L stainless steel case (with a 44.5mm lug-to-lug) we find the mechanical hand-winding SeaGull movement. You might be thinking that the case is rather thick, but 2.8mm of the height come from the incredible double domed sapphire crystal. The way it distorts the dial when looking at the watch at an angle yet maintains perfect readability of the tachymeter when looking at the dial head-on is brilliant. The 20mm lug width is always a plus as most of us likely already own a number of straps in this width. However, you won’t want to swap out the wonderful chocolate brown goat-skin strap that comes on the Mint Ch0c Chip! Made by David Richards (AKA. The Strap Tailor), it’s slim, supple, and is wonderful on the wrist. 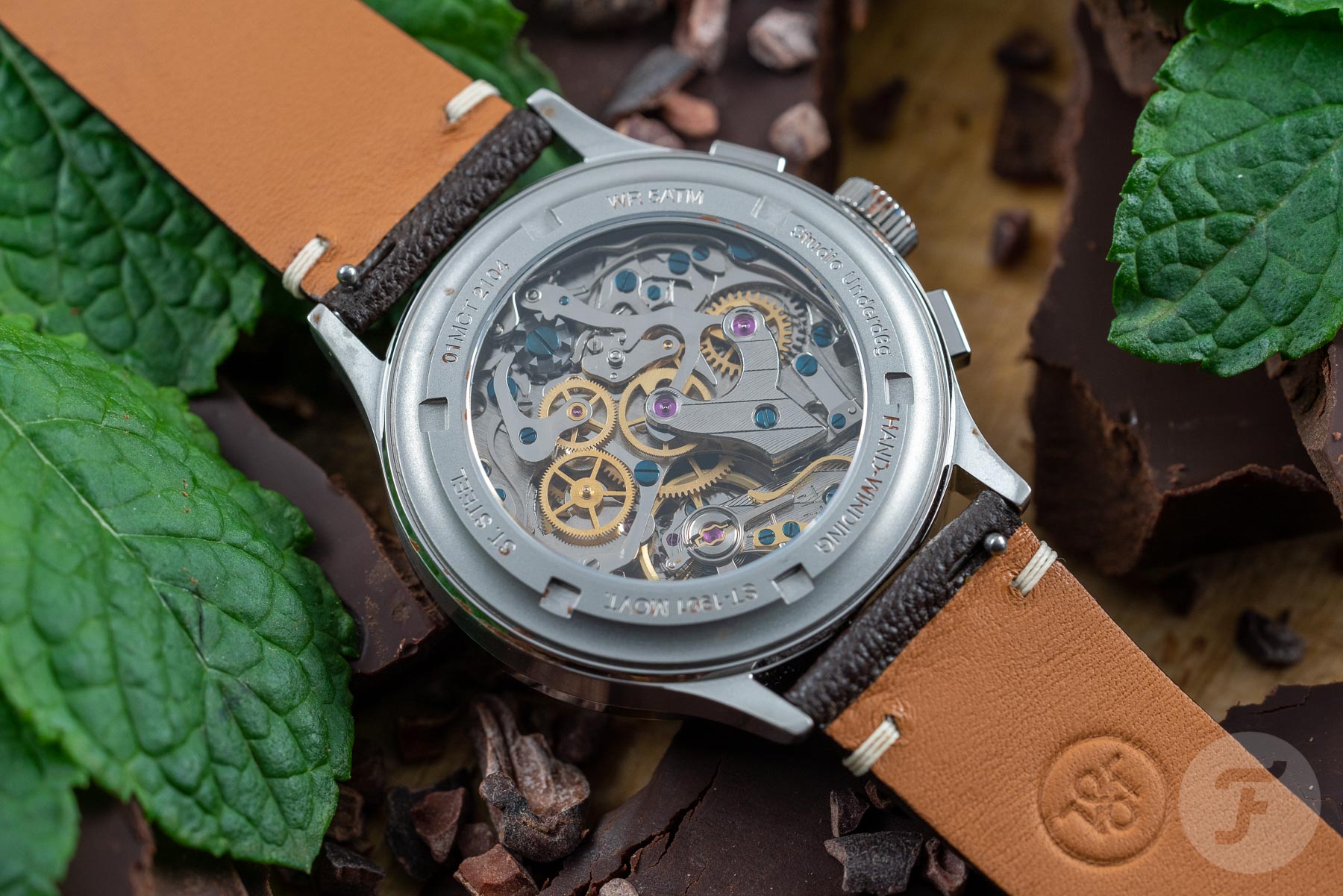 Don’t tell “Ricky”, but I wore the watch while cycling to and from work. And I’m happy to report that the Haas Zermatt lining of the strap, meant to be resistant to sweat and moisture did exactly what it says on the tin. Apologies for the tangent, we were talking about the movement… how rude of me! Anyway, some of you might have heard of SeaGull movements. They’re made in China using the technical drawings of the Swiss Venus caliber 175, which were sold to the Chinese Airforce in the 1960s. Now China may not be synonymous with quality in everyone’s head, but this movement is an exception. So much so that Studio Underd0g proudly displays it through a sapphire case back. And there’s plenty to see, from blue screws to a gilt swan-neck regulator. The chronograph starts, stops, and resets with a satisfying click. 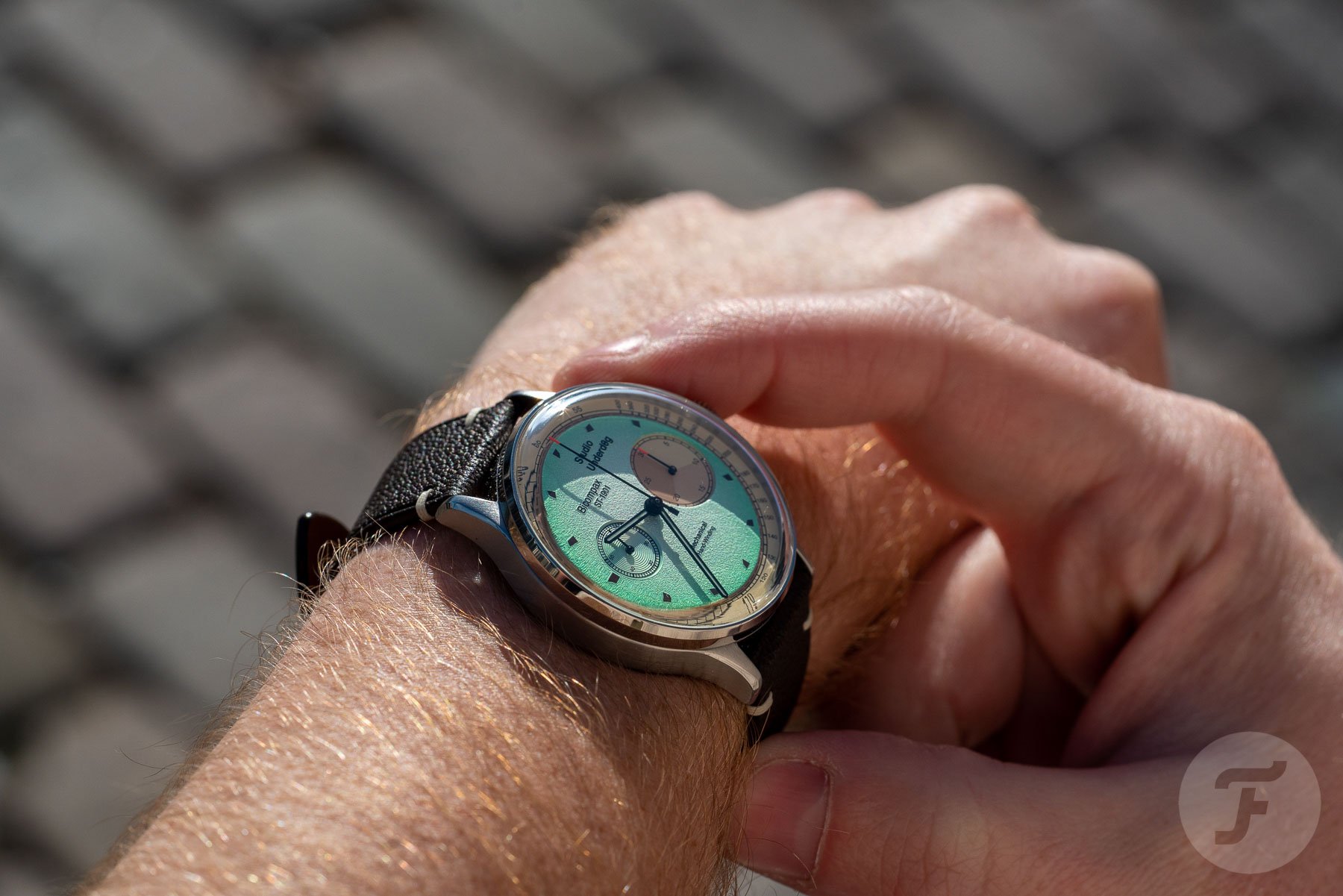 I mentioned in the opening that there’s something familiar about the watch’s looks. This comes from the mid-century case design. I recently wrote about my equally bicompax Chronographe Suisse, and wearing these two watches interchangeably in the same week confirmed that this was the root of the familiar feel. The square pushers, and shapely lugs, and great wrist presence is a given. The Studio Underd0g is slightly larger and taller, but that only makes sense for a modern watch. Plus, the juxtaposition of a classic case design with a contemporary dial is just a small part of what gives this watch so much charm. 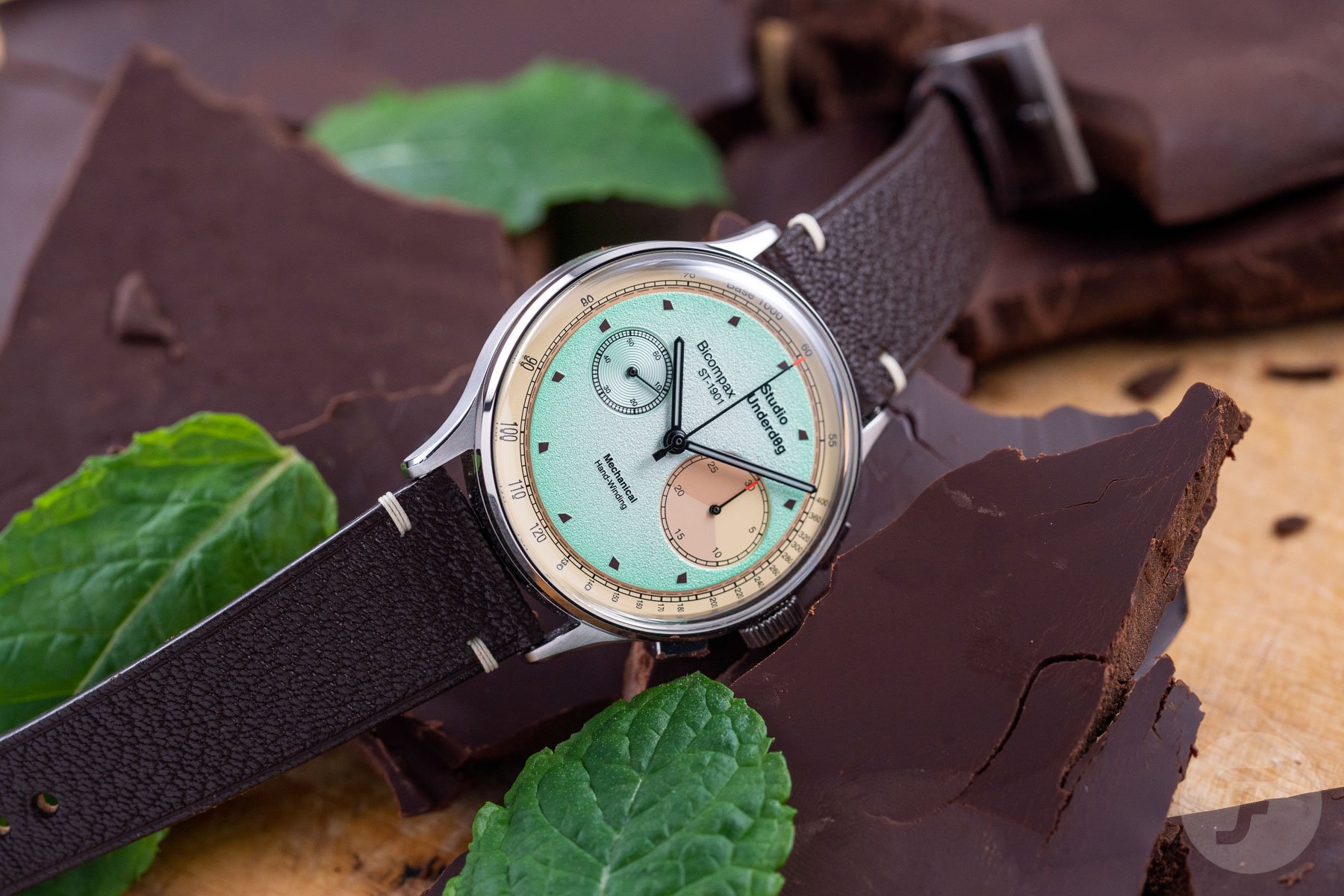 The Studio Underd0g Mint Ch0c Chip comes in at an unbelievably reasonable £440 (about €520). The only question I’ve been asking myself is why I haven’t placed an order already! I’m gonna have to reach out to Ricky and get my hands on one of these ASAP. You might be wondering why the price has gone up from the £370 of the previous models. Well, look at it this way, a strap from The Strap Tailor will typically set you back a very well-spent €110 (or more for some of the more special models). So ultimately, a price difference of £70 only makes sense. For that, you’re getting a double-take-inducing Chrono with one of the most comfortable straps out there. 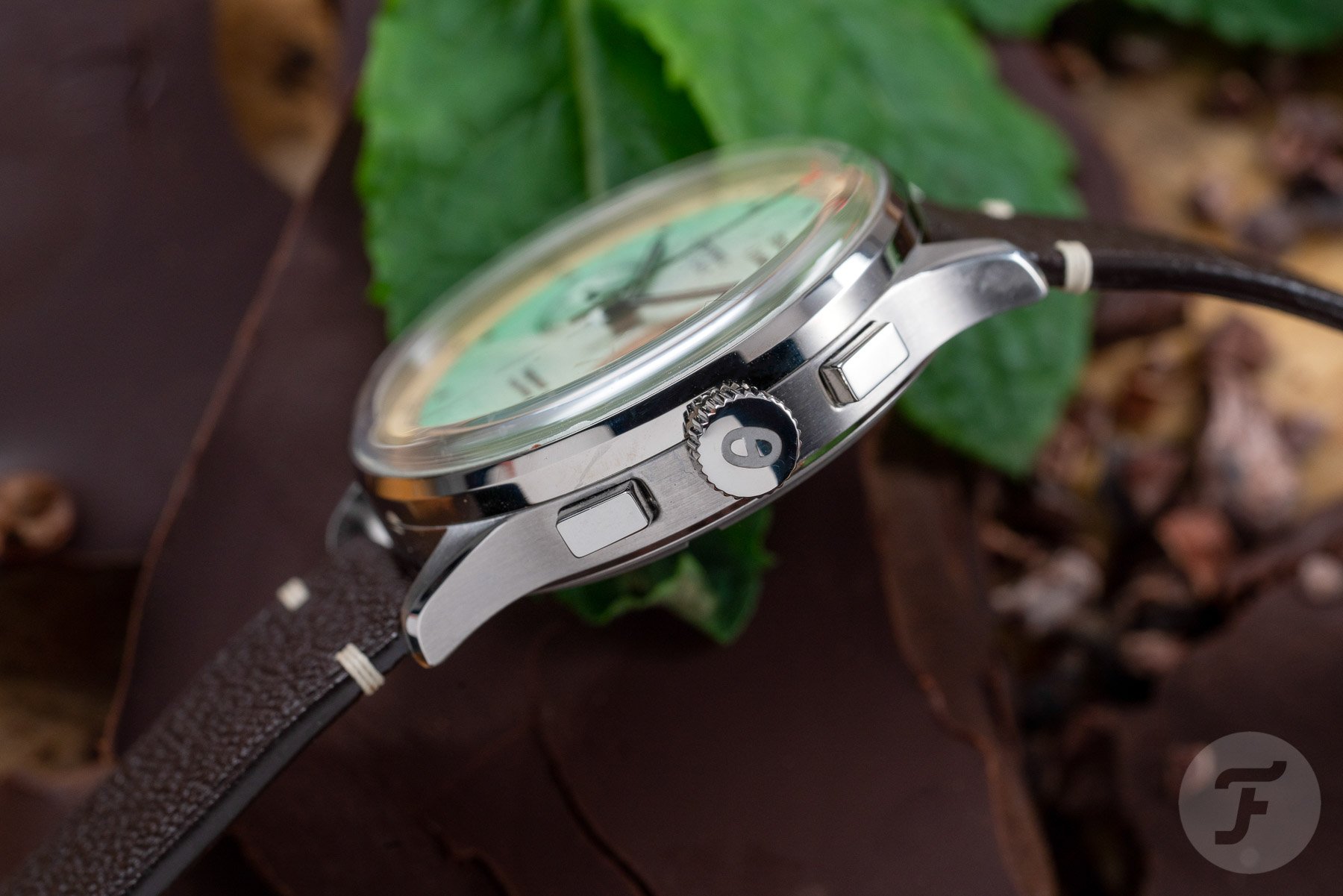 I know one thing for sure, I’ll be keeping an eye on Studio Underd0g going forward — let’s not forget that this is just the brand’s first year of existence. I’m sure only fun and exciting things are on their way! What do you think of this tasty stunner? Let me know in the comments down below!

For more information on the Mint Ch0c Chip check out the Studio Underd0g website here.